I imagine you can guess where we’ve been from this photo.  We are back from a wonderful vacation trip to Yellowstone National Park and Glacier National Park.  This was my first time to see either park, even to be in that part of the country.  I took almost 500 pictures and I’ll show you just a few today.  Old Faithful was fun, and we only had to wait a few minutes that day to see it go off.  I took about a dozen pictures while it was going.  It went on for enough time for me to enjoy being in the moment while still getting some great photos. 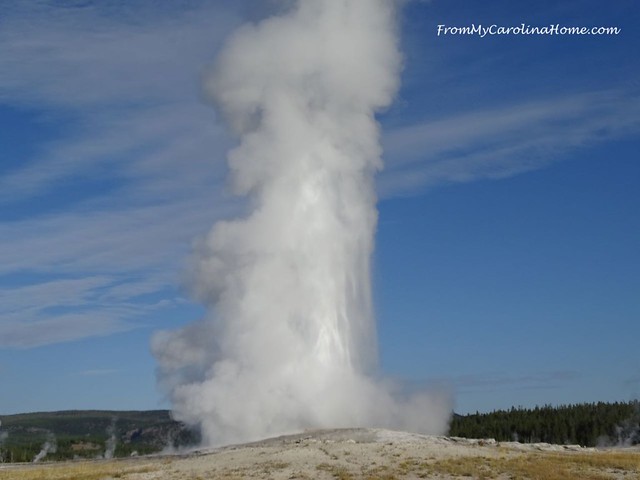 Geysers are all over the park, this one producing enough steam to cover the road. 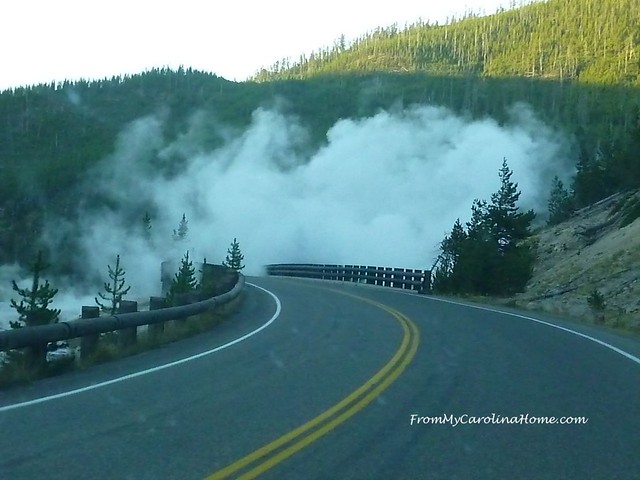 Gorgeous colors come from organisms living in the hot springs waters, so clear you can see into the deepest part of the spring. 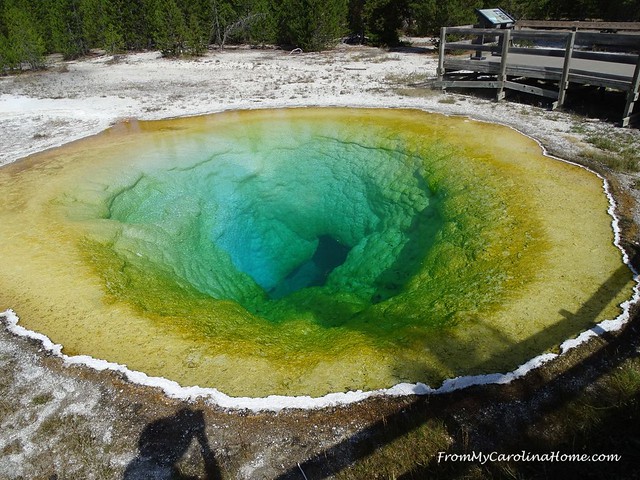 This was the Grand Prismatic Spring, the largest hot spring in the US.  The colors were stunning, but difficult to photograph from our vantage point.  There is a deep blue in the middle, with green then bright yellow rings surrounding the blue.  Working outward you can see the browns and rust colors.  An overhead view was on a postcard in our room, so we sent that to dearest MIL. 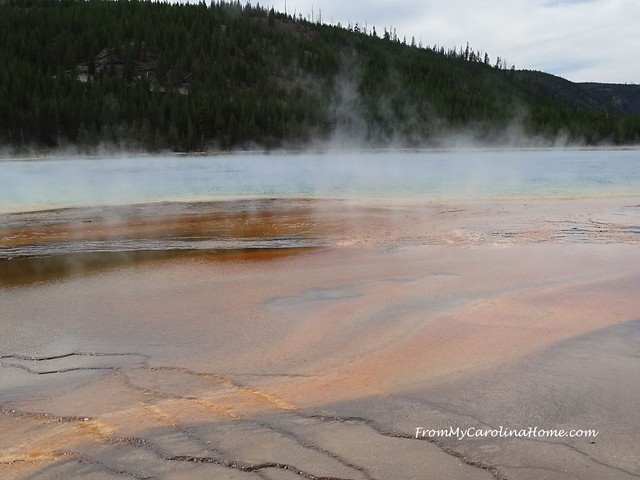 We were told that the best wildlife watching was at dawn.  No problem for us as we were on Eastern time and awake at 5 am anyway most days.  In the soft blue light of pre-dawn, we found this little group crossing the river.  Sorry this pic is a bit blurry, but it was the only one I could get before they disappeared into the forest. 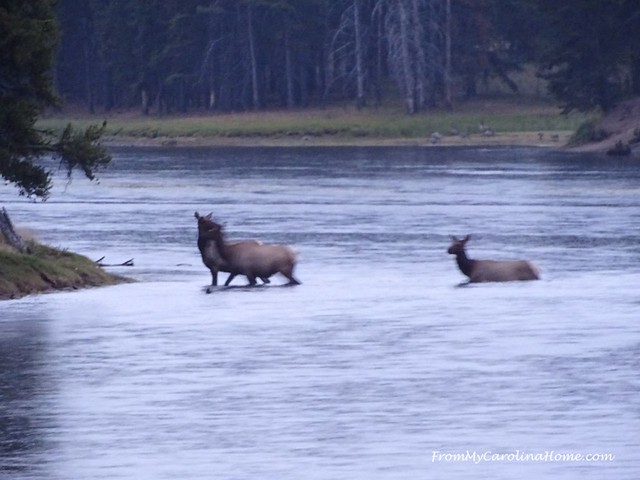 Bison were abundant in the Hayden Valley.  On the morning we saw them, we had just had a close encounter with two of them running down the road!  They were in the lane going the opposite way from us, and ran right by us in front of a line of traffic. 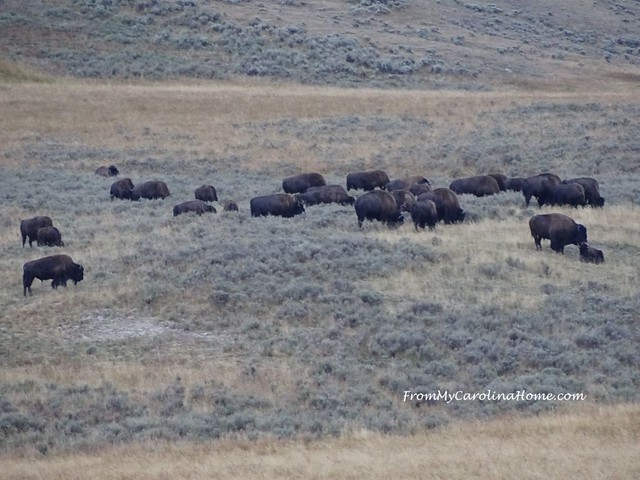 Coming around a corner, I spotted these elk, grazing but wary.  We stopped to watch them from the car.  Rolling down the window, I was able to get a few good pictures. 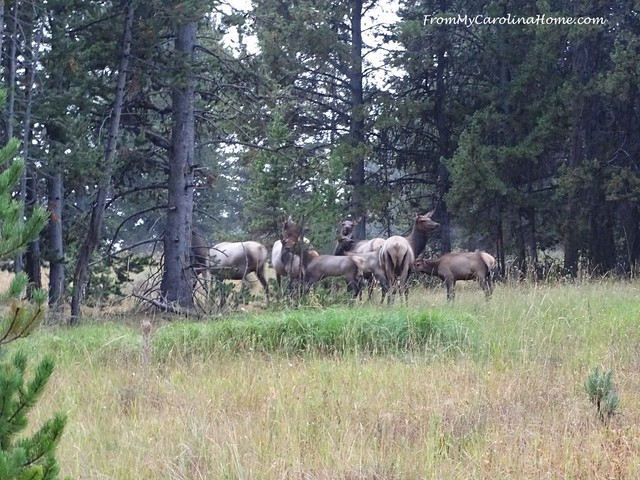 As we watched, this magnificent buck made an appearance.  Just look at his rack of antlers! 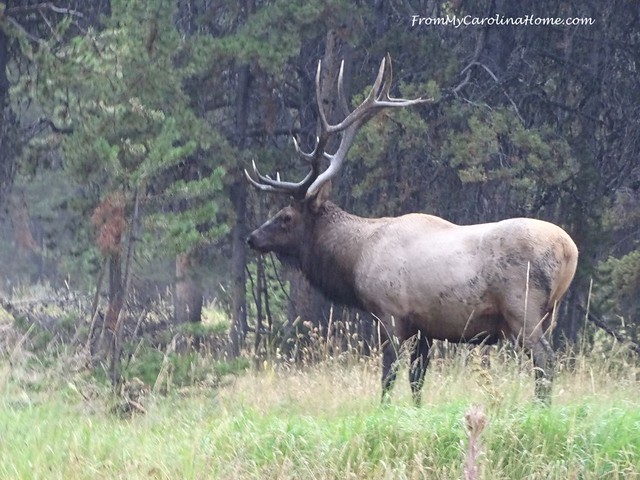 More hot springs to be seen in the afternoons.  We saw the Paint Pots which looked like bubbling caldrons of mud, and more geysers.  There were several areas with boardwalks to protect the fragile thermal ecosystems, so walking was easy. 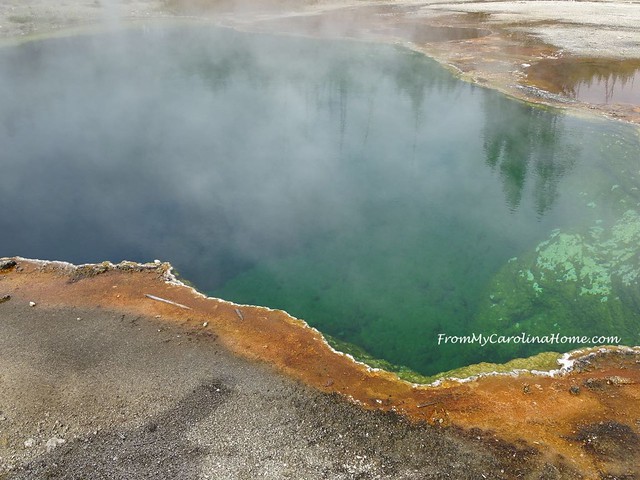 This little one was keeping an eye on us, its mother was a few steps behind. 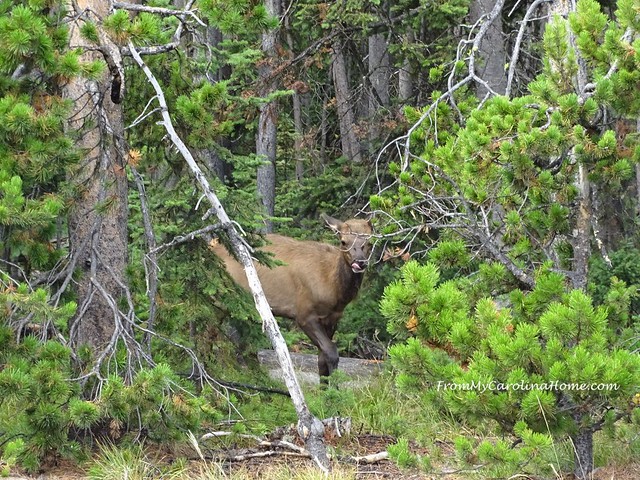 Another dawn, we saw this bison alone in the river water.  He is really far away, this photo was taken with just a little zoom to get some of the mountain forest background. 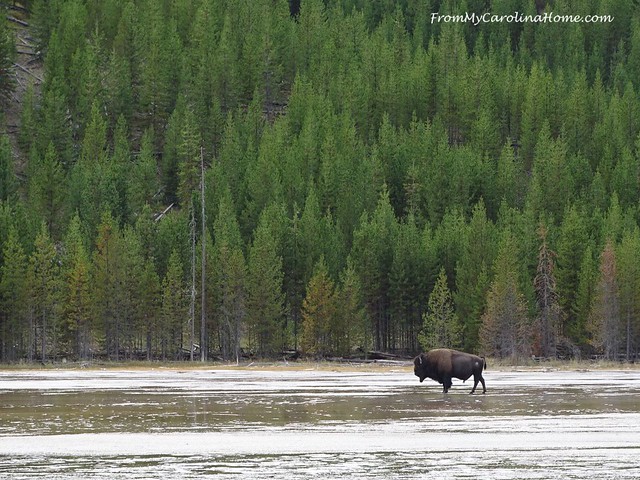 Using the full zoom on the camera, I could get a close shot of him, while remaining at a safe distance. 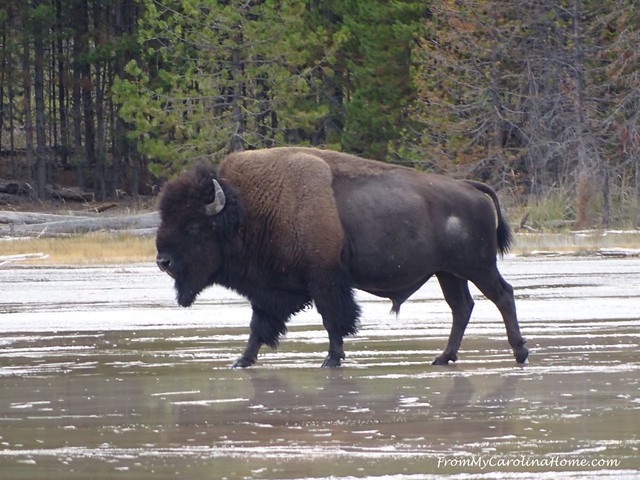 Yellowstone had a devastating fire in 1988, and parts of the park still show evidence of the damage.  Here, over 30 years later, the burned tree trunks still stand, with regrowth of evergreens coming along. 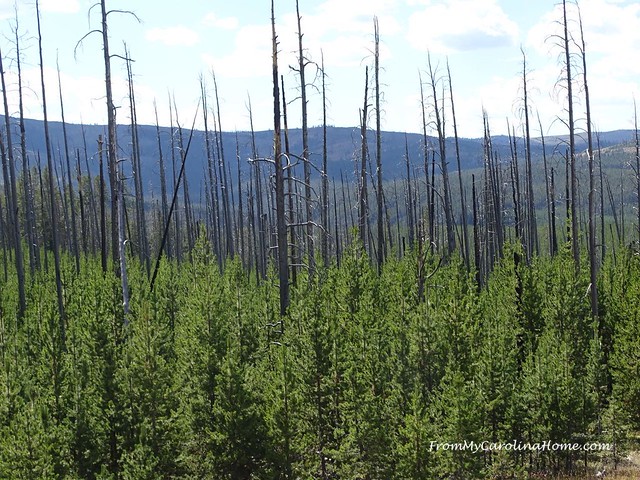 Yellowstone’s Grand Canyon was awe inspiring, with the Lower Falls waterfall on the Yellowstone river. 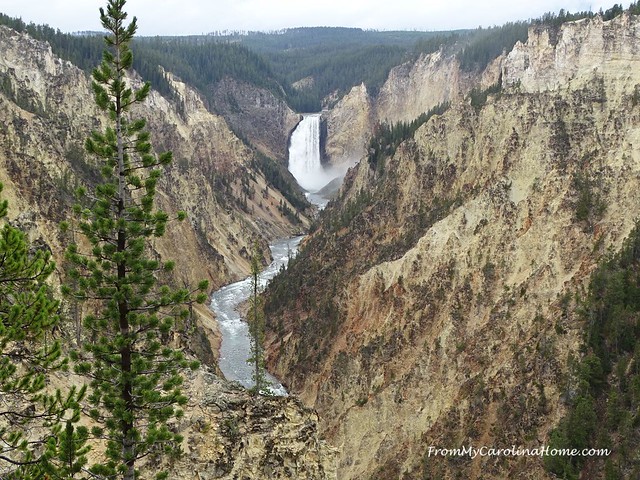 On the last day, the most amazing part of our stay came again just at dawn.  We were up really early to go to Lamar Valley where we hoped to see some of the big horn sheep or more antelope.  Coming over a rise we saw lots of cars parked and people standing, so we parked at a pull-out before we got to the crowds.  A man with a camera on a tripod told us that wolves were playing in the river.  He knew a lot about wolves, and we had the impression that he studied them a lot in the park. I looked and saw the dark spots moving across the river, far away. This far – 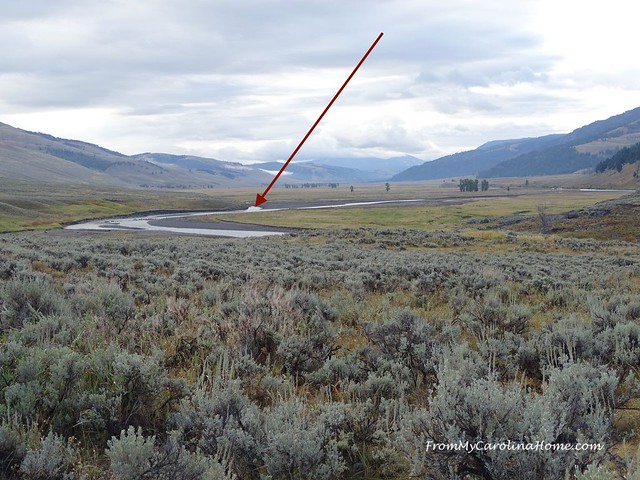 But with the zoom on the camera, I could see them playing, more like frolicking in the water. 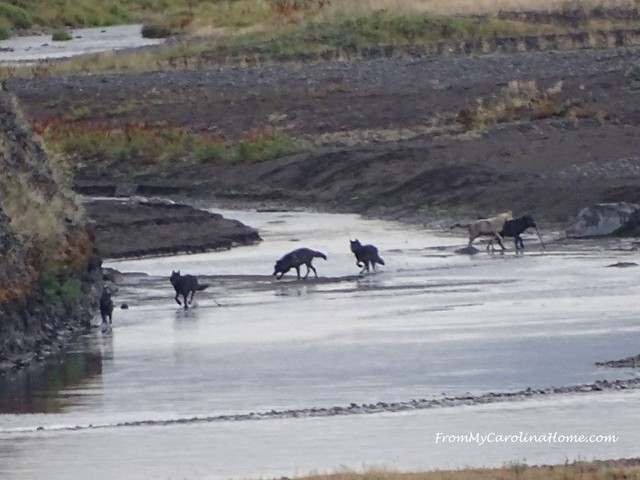 He told us that this is something they rarely do, and almost never seen by humans.  We watched in wonder as seven wolves ran back and forth across the river, splashing and jumping, chasing each other.  One would nip another’s tail, then turn and run the other way.  They played with abandon for 15 or 20 minutes, then left the water and started across a field towards the forest.  The sense of having witnessed something truly remarkable stayed with us for quite a while. 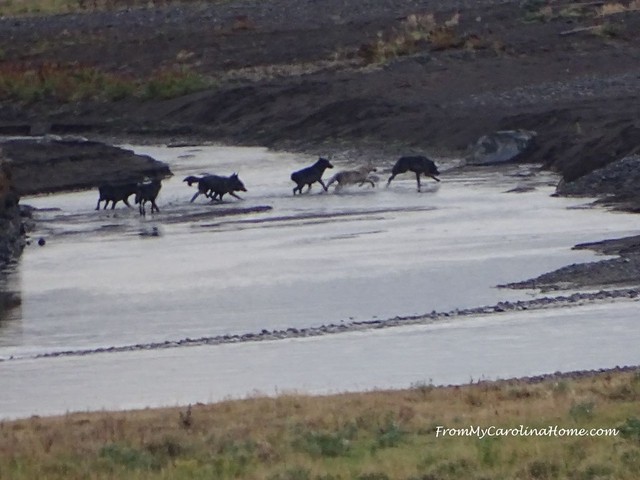 On our way out of the park, one last stop to see a small group of antelope. 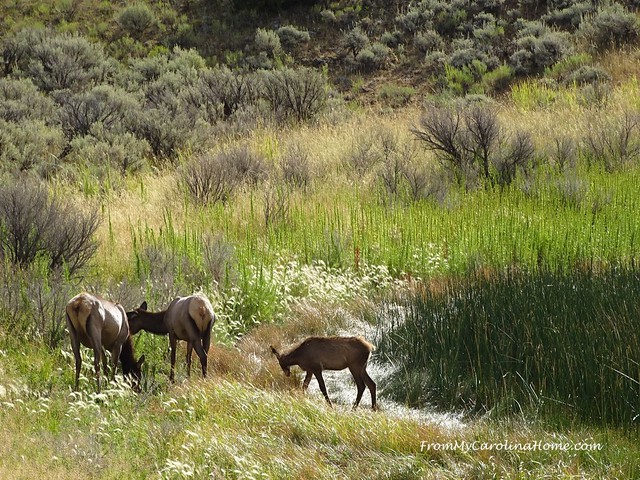 We went on our way, driving from Yellowstone to Glacier National Park in northern Montana.  I have to say it was an interesting drive with the speed limit at 80 in places on the interstate.  Driving more on back roads, there is a lot of pasture and farmland in Montana, such a peaceful cruise up to Kalispell.  That is until we realized we hadn’t seen a gas station in a long time.  We found one in a tiny hamlet, with a friendly proprietor who told us that in Montana, when the gas gauge reads half-full, start looking for a station.  Arriving in Kalispell, we checked into our hotel, and got up early again to explore the next place on our list.  Glacier National Park is much smaller, and we did the Going to the Sun Road in one day.  The Sacred Dancing Waters were lovely. 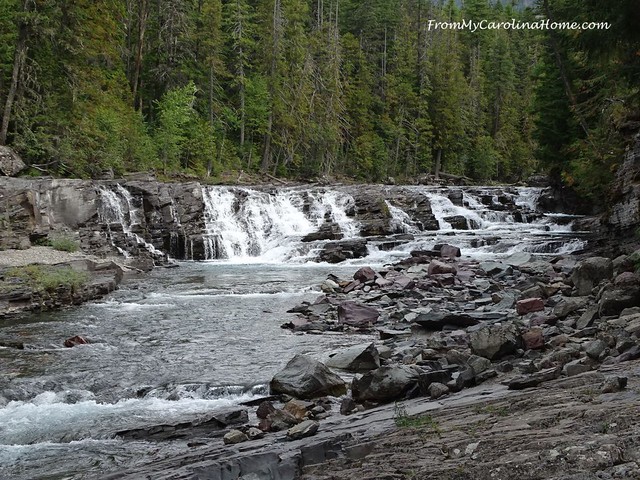 It was a bit disappointing to find that the glaciers are now just small patches of ice, and will all be gone within the next few years.  Still, the mountains were extraordinary, and beautiful, even though we got rain on the day we had to drive through.  We did go back for a bit more scenery the next day. 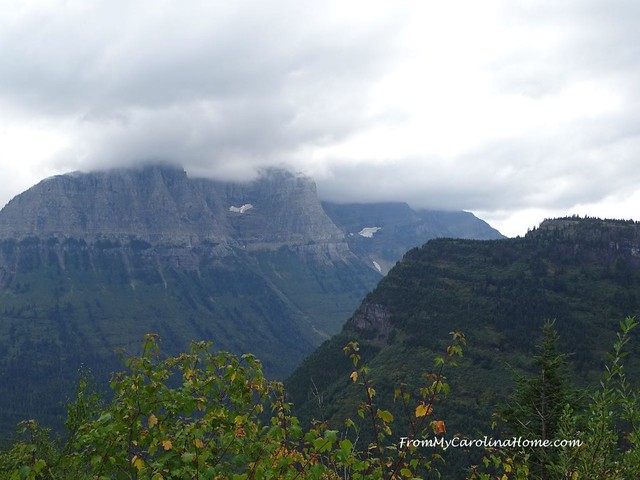 It took an entire day to get home, getting up at 4 am to catch the first of three flights at 6:25 am.  We were tired, but it was a wonderful time to just get away from everything.  But no time to rest, as the next day I had to get to the grocery store to stock up, and then to the Fair for the first of the three cooking contests I was entering.  Plus I wanted to take some photos for next year’s photography contest and see how my quilting and crafting entries did.  I’ll bring you that tomorrow.

Thank you to everyone that participated in the survey questions while I was on a break.  It has really helped me to determine a couple of things I can drop, one fairly time consuming which will leave more time to design and create, ultimately bringing you more of what you want to see.  I read every comment and suggestion, and thank you for the wonderful feedback.

Lots of fun things are coming up, as I almost have Autumn Jubilee set.  New designs are on the way, and some really fun ways for you to participate.  I hope you will share your projects in our Facebook Sharing Group.  If you haven’t joined yet, be sure to answer the questions or the moderators may not approve you.  My two moderators, Pat and Mary, help to keep the group on track, but we would all like to see more of your projects inspired by my blog.  That includes your quilting and sewing projects, tablescapes and recipes, your garden and decorating.  We have enough folks there that the discussions should be lively, and I try to stop by every few days to see what you all are doing.

What’s going on in your sewing room / garden / kitchen?

41 thoughts on “Adventures in Yellowstone”

I love to chat, and try to answer every comment via email. Cancel reply