You know, I don’t ask for much when I agree to do longarm quilting for charity.  All I ask is that the quilt have 8 inches of extra fabric both lengthwise and crosswise on the batting and backing.  Particularly when I am quilting for charity (and by that I mean for free, no matter which organization it is for), if I am going to give away over $100 in value for longarm quilting, the least that can be done is provide the proper size backing and batting.  Recently, I was given this one to do, and it had some issues, but I really was miffed when I loaded it. 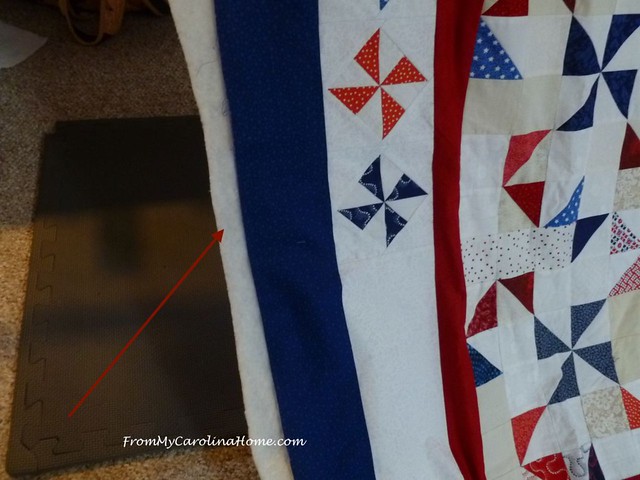 So let me show you again, why longarm quilters need the extra fabric.  The base of my machine is small, but it is still 2-inches from the needle to the edge. 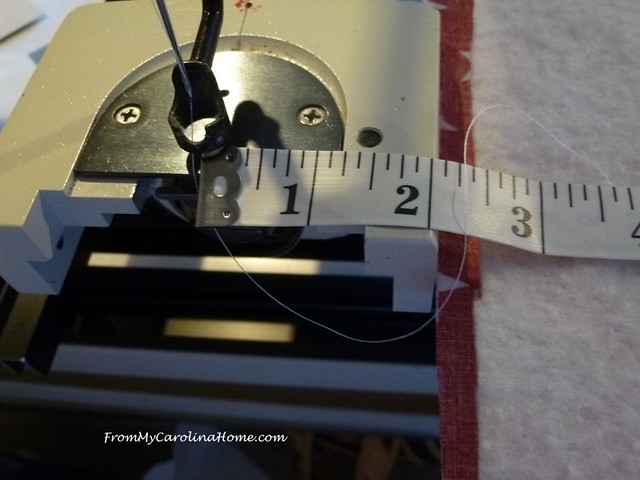 The clamps need 1-1/2 inches to comfortably hold the project. 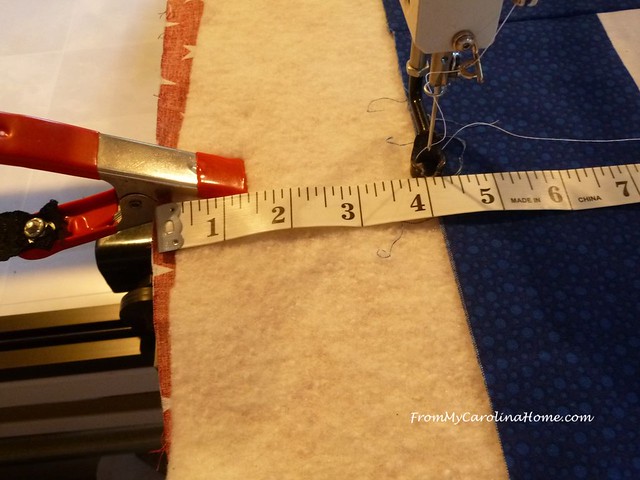 So, add those together, and you get 3-1/2-inches, plus only a half-inch for clearance.  Any less, and the base of the machine will hit the clamp before the needle reaches the edge of the project top.  That means I need four inches of clearance all the way around the quilt top, or a total of 8 inches longer and wider for the backing and batting. 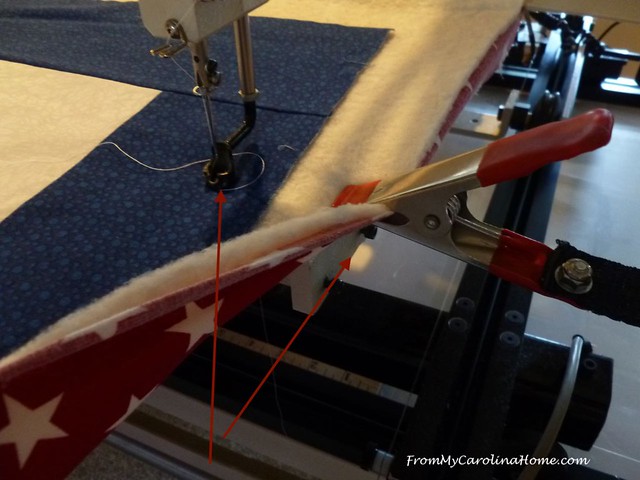 OK, so what?  Well, hitting the clamps can create one or more problems.  First, the most minor is a wobble in the stitching line as the machine bounces around the clamp like this.  The circle should flow evenly off the edge, but it bounced inward.  Remember, I am quilting from the back of the machine, I am not looking at the clamps, nor can I reach them to move them as I go. 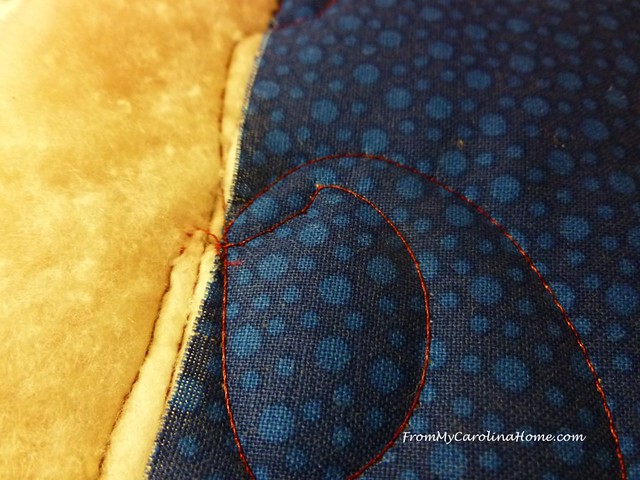 No big deal, that’s not a problem for the piecer, I hear some saying.  Aside from the fact that hitting a clamp is startling to me, and that it results in less than my best work, that is only the most minor thing that can occur.  What happens more often is a thread break at the point of hitting the clamp. 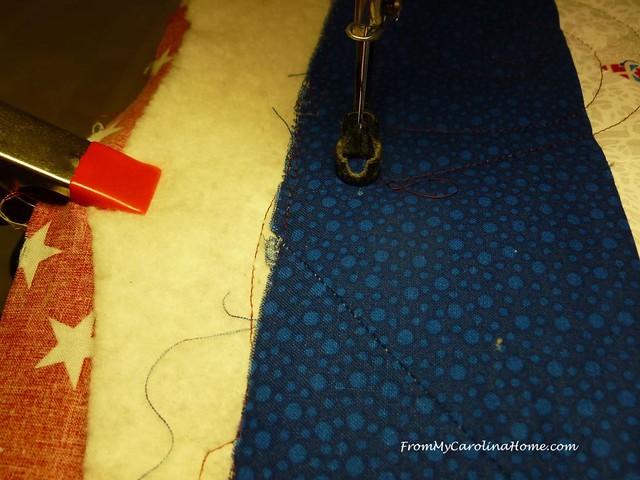 So now, I have to stop, come around to the other side of the machine, and pick out a line of stitching to get enough thread to tie off.  Often this means rethreading the machine as well, and removing the bobbin to check the tension again.  This has just cost me about 15-20 minutes, not to mention the aggravation. 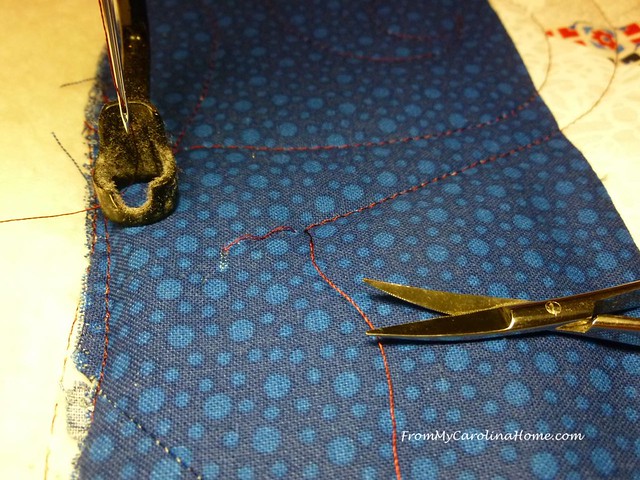 The stitching has to be pulled out for several inches, and carefully so as not to nick the quilt top, nor cut the thread again.  At least it only broke the thread, it is much worse if hitting the clamp breaks the needle, too!!  Longarm needles are not cheap.  And worse yet, it can possibly throw a machine out of proper timing, which is a LOT of time to fix, as re-timing a longarm is a royal hassle. 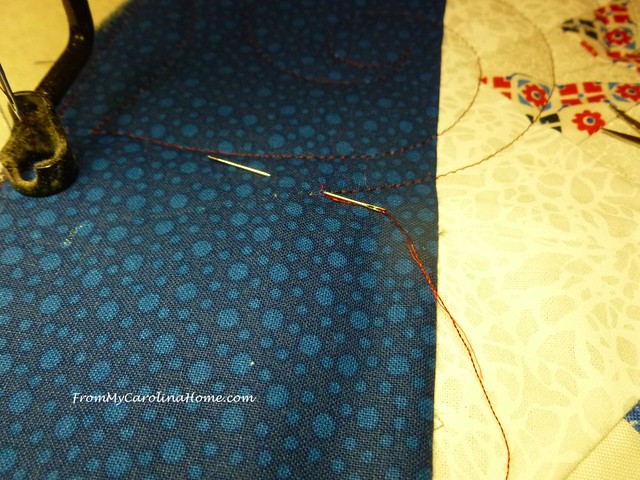 Another thing is stitching the edges down can sometimes result in bunching of the fabric at the edge as the machine maneuvers around the clamp, if I don’t pick it up in time.  This will have to be taken out and redone so the top lays flat.  More time and effort that I shouldn’t have to do. 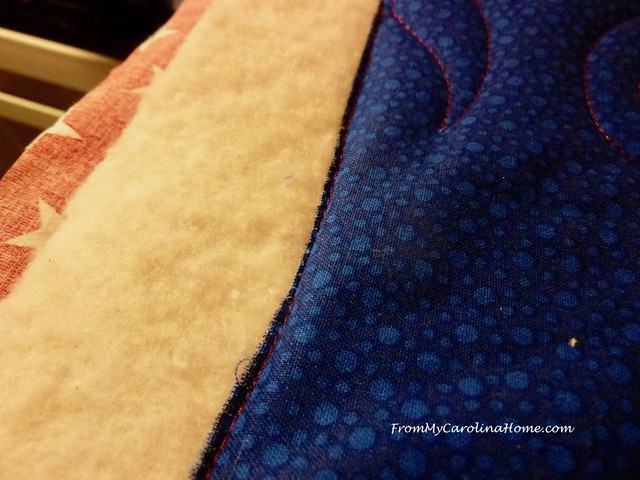 But this is what really frosted my cookies.  The note pinned to the batting clearly indicates that the person KNEW it was only 5-1/2-inches wider instead of the 8-inches needed.  I can just hear someone saying, “oh well, it’ll be fine” in total ignorance of what it means to the longarmer. 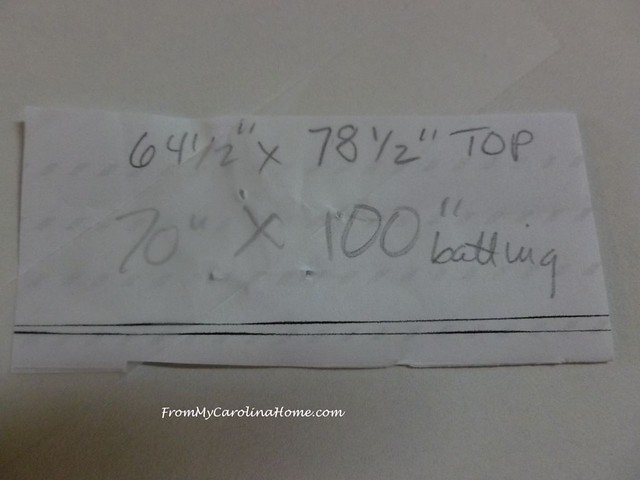 Add to that, the poor cutting resulted in even less batting in the middle than at the edge, seen here at the top laying on the longarm.  That is a 2-inch difference!! 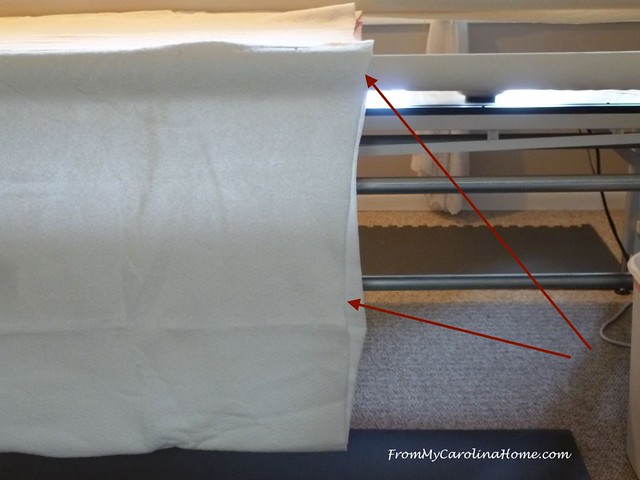 I was only able to get this little bit to stick out by pulling the batting a bit to stretch it, not the best idea. 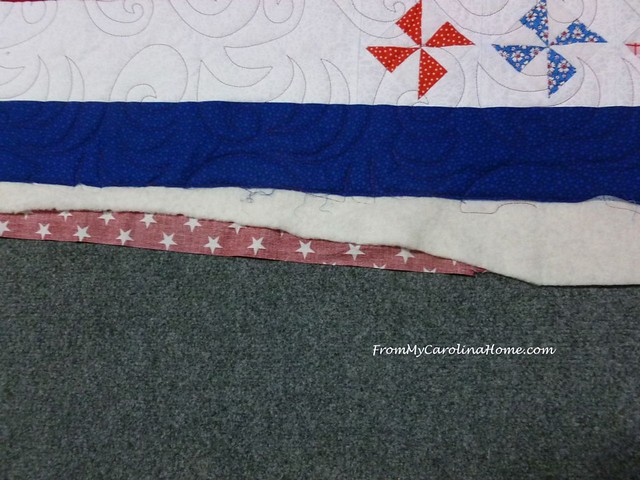 So, here we are loaded up, and I see another issue. 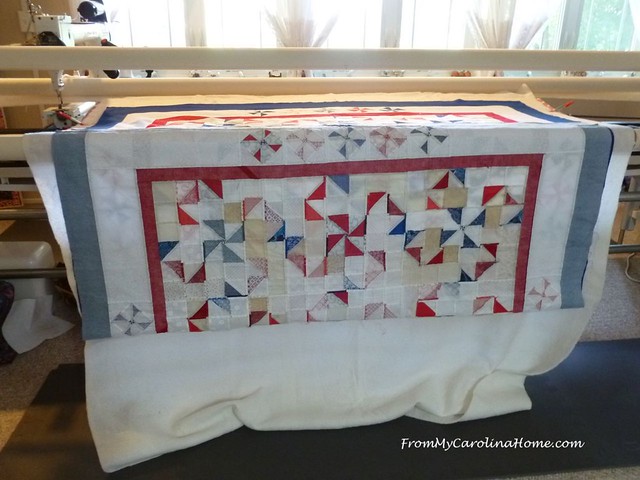 My fold up method of checking quilts reveals there is more fabric in the borders than on the center section.  See how the middle is bowing up?  It isn’t much, just enough to mean I need to pay more attention to the borders.  As if I didn’t have enough to pay attention to before. 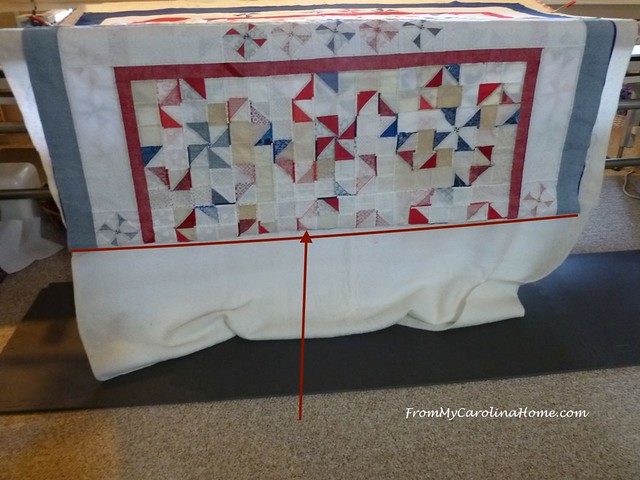 Here’s the problem, bias seams on the borders, never a good idea, even if you are ultra careful and use the proper measure and cut method of applying borders.  They stretch and distort even with simple handling, and that is before it is loaded onto the frame. 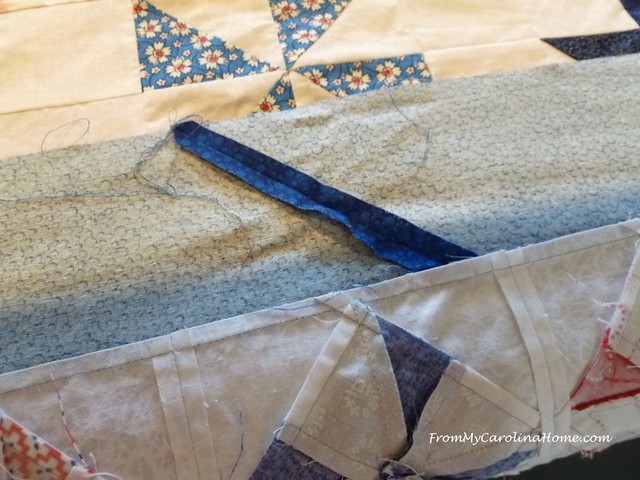 I worked through the quilting and got it done, but it took a fair amount of time longer than it should have.  I used dark red Glide in the top and Bottom Line in the bobbin. 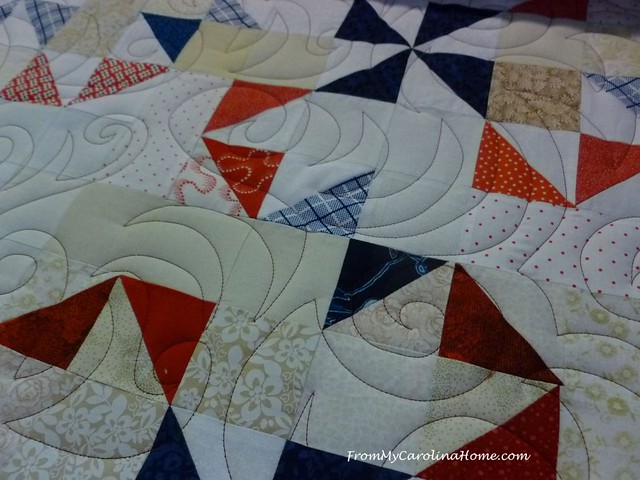 This pantograph is called Tiger Swirl and is good for a guy quilt. 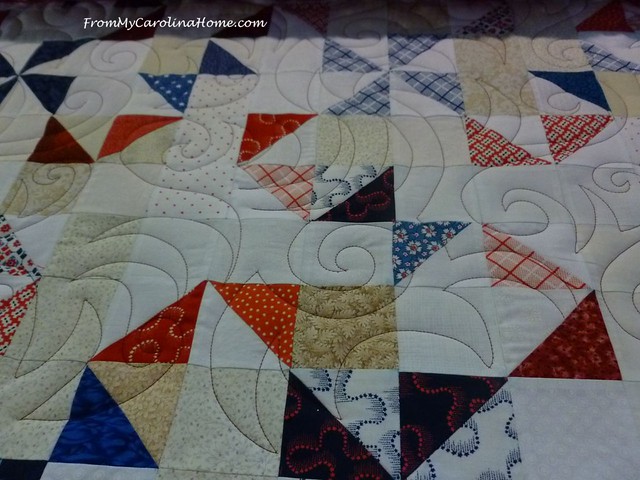 Overall the final result was good. 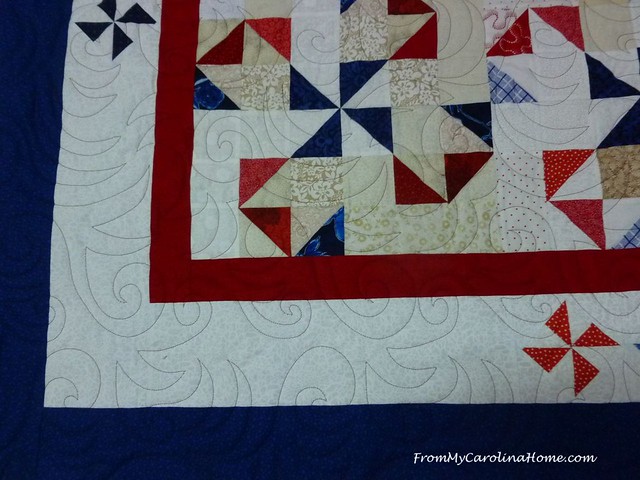 I gave it back without my usual trimming, and with a note attached, so the organization that gave it to me could see the problems.  Hopefully, the next one will have the required amount of backing and batting.  If not, it is going to be returned un-quilted.  I just don’t think that it is too much to ask. 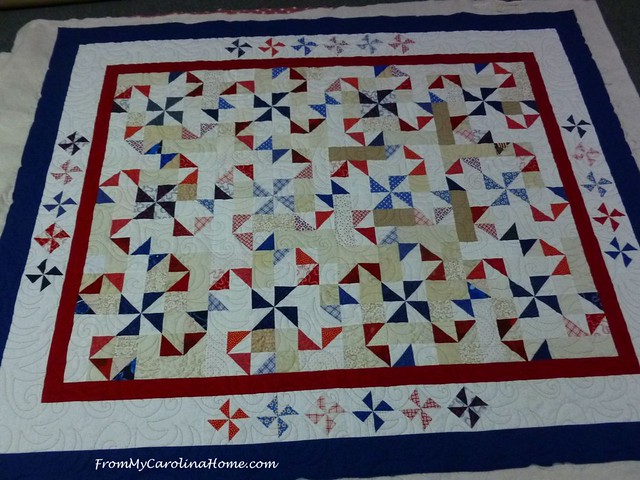 FQS has the Hoffman Dream Big Panel, in all kinds of colorways.  Amy at Amy’s Freemotion Quilting is going to do a series on different fills, so it would be fun to quilt along.  The sections are small enough to do on a domestic machine, so you don’t have to have a longarm to play.  Get yours and let’s have some fun!!  I’ll be working on mine after Autumn Jubilee, coming October 2019!!

54 thoughts on “Dealing with Quilt Issues”