It’s National Waffle Day, and I had an idea for a great new waffle, full of flavor yet very simple to make.  Many moons ago, when I was in college, I worked at a mom-and-pop breakfast diner whose specialty was pancakes and waffles.  Their waffles were light and fluffy with a crispy crust that soaked up butter and still had that crunch.  They were not Belgian waffles, but flatter than the Belgian waffles in other establishments, and big as a dinner plate.  For years I have searched the diners for one like it, without success.  Neither IHOP nor Waffle House could even come close, and many tries with smaller diners struck out as well.  I have tried all kinds of recipes for waffles at home, some from family members, others from friends, with eggs, without eggs, trying various mixes, making from scratch, thin and thick batters of all kinds.  I had an old style waffle maker given to us for a wedding gift, and it was terrible as the waffles always stuck to it no matter what I did to keep that from happening.  I threw it out years ago, and tried with my mother’s waffle maker, but struck out there, too.  Finally, I figured out a close substitute with a new waffle maker and a simple mix. 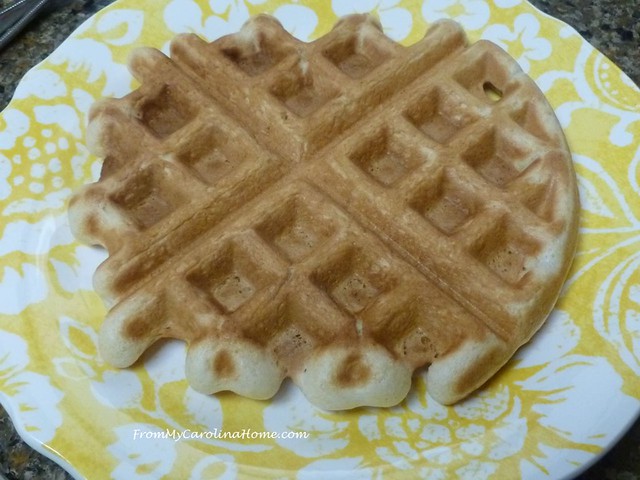 In my humble opinion, there is just none better or closer to the goal from my early working days than the very simple use of one particular mix, Aunt Jemima Complete Pancake Mix used with a modern waffle baker.  Be sure you get the Complete Mix, as they make more than one.  I bought the wrong one by mistake once, and it didn’t give me the same results.  The upside is that the recipes with it are really easy, little measuring to do and they always come out light and fluffy with that wonderful crisp crust.  So, today, we add more flavor to the humble breakfast waffle. 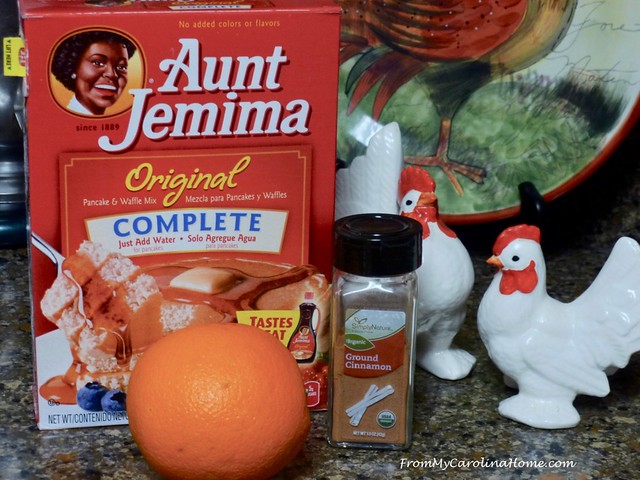 Start with combining the pancake mix and cinnamon in a bowl. Grate orange zest directly into mix. 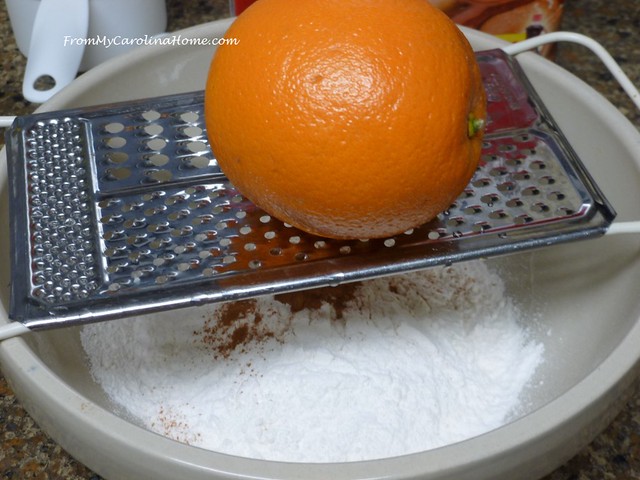 Add water and oil, and stir until most lumps are gone. Let the batter sit while griddle heats, 2-3 minutes, it will thicken up.  Preheat waffle griddle to medium heat. 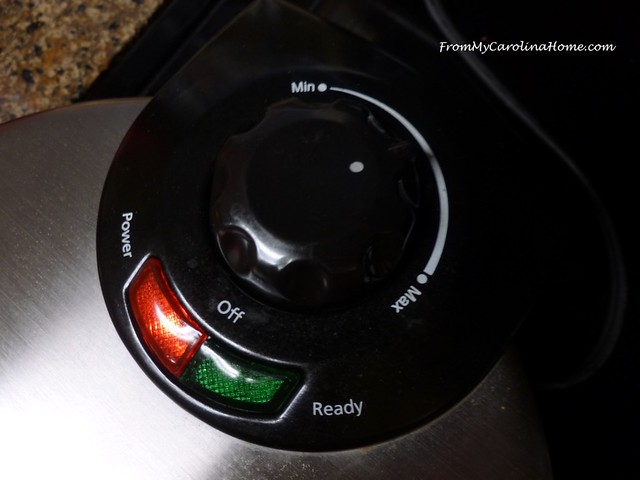 Pour one cup of mixture in waffle iron, close cover, then bake for 10 minutes. 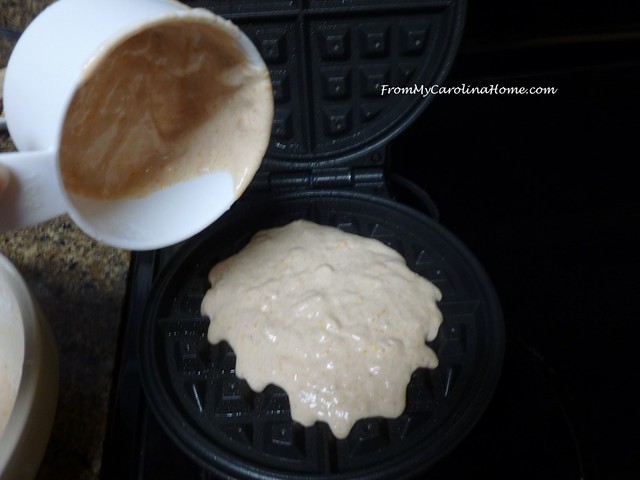 There will be a lot of steam at first, and then will decrease as the waffle cooks. 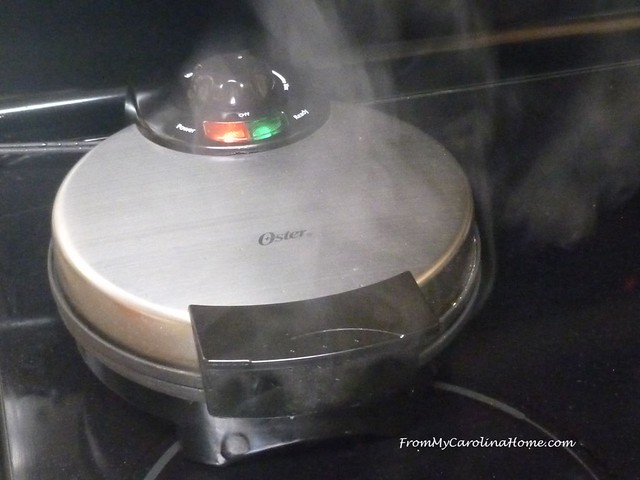 The first one isn’t quite a full waffle, LOL!!  Oh well, it still tasted good. 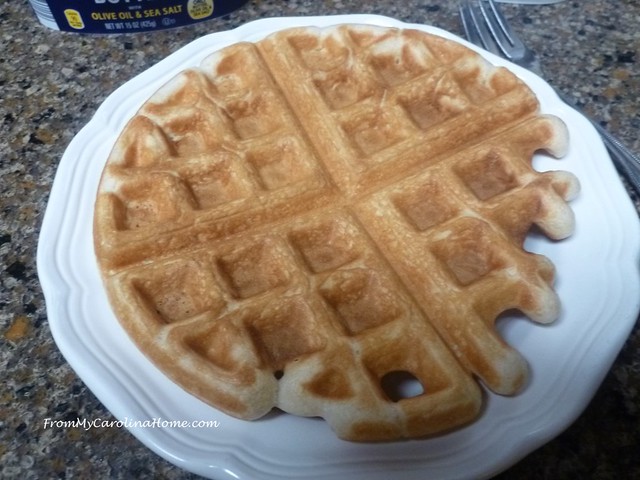 Serve with orange butter if desired.  Just mix some of the orange juice from the orange into softened butter for extra burst of orange flavor.  If you want something sweeter, you could make a glaze with the juice and some powdered sugar.  I mixed the softened butter and orange juice up without extra sugar.  It added a nice orange flavor to the waffle breakfast.  You can just drink the juice with breakfast if you prefer. 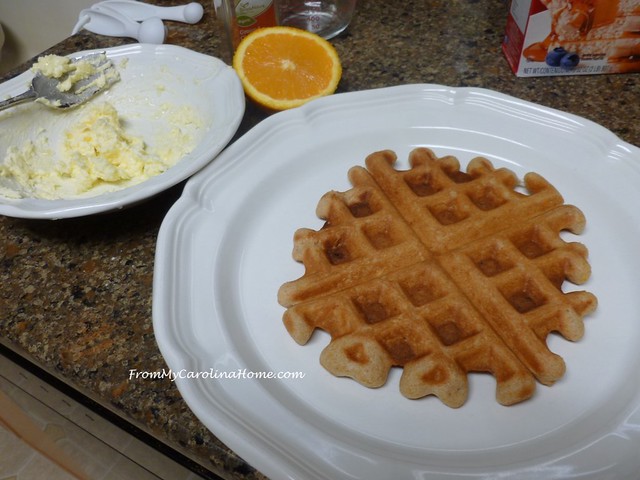 This might look like a lot of orange butter, but I don’t put syrup on my waffles. If you like syrup, just a bit of maple would taste nice. 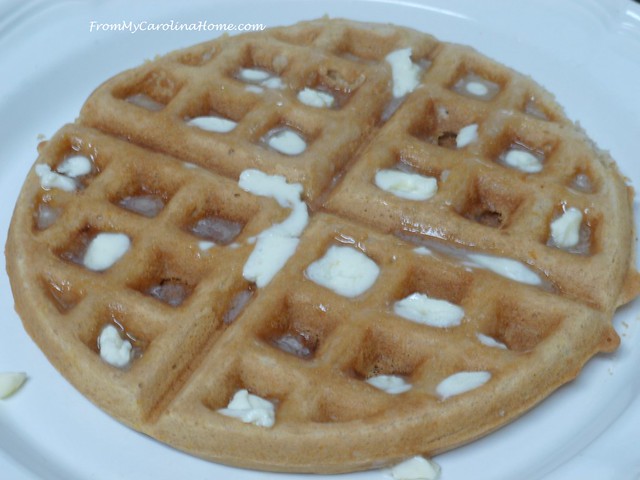 Combine pancake mix and cinnamon in a bowl.  Grate orange zest directly into mix.  Add water and oil, and stir until most lumps are gone.  Let sit while griddle heats, 2-3 minutes.  Preheat waffle griddle to medium heat.  Pour one cup of mixture in waffle iron, close cover, then bake for 10 minutes.  Remove and bake second waffle with remaining mixture.  Yield 2 small 8-inch waffles.  Serve with orange butter if desired, or plain butter and syrup.  Double the recipe for more waffles.

Download a pdf of the recipe – Orange Cinnamon Waffles 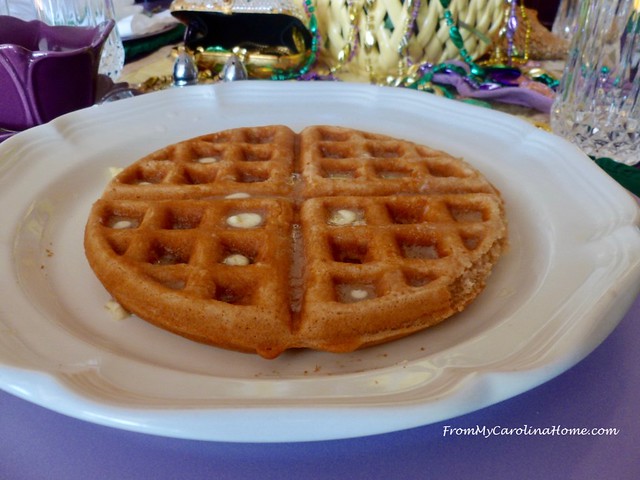 Yum! Do you like to make waffles at home?

My waffle maker is the Oster Belgian Waffle Maker available on Amazon. 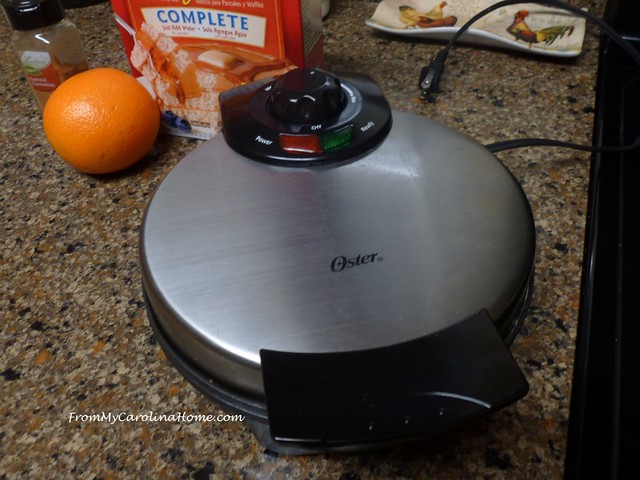