Merry Christmas!  I hope you are all having a wonderful day.  I thought it would be a fun day to show you a unique exhibit at the little, old house that is the home of the Transylvania Heritage Museum.  The exhibits change regularly, and each December they bring out a most unique collection. 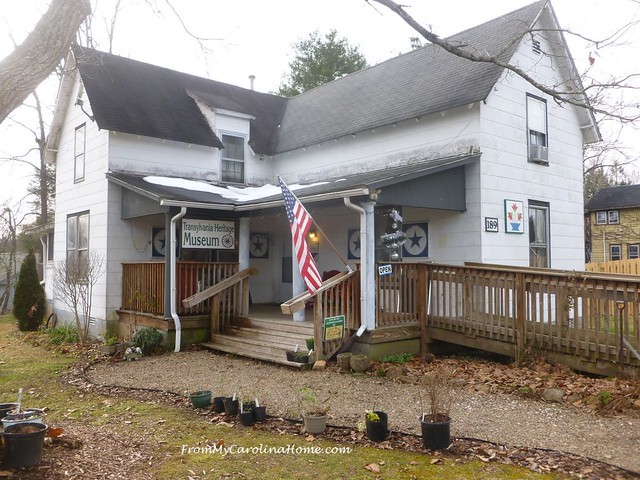 Yes, those are aluminum Christmas Trees.  The ATOM organization sponsored the exhibit, tongue in cheek for Aluminum Tree and Aesthetically Challenged Seasonal Ornament Museum.  Aluminum trees got their start when a Toy Sales Manager for an aluminum toy company, Tom Gannon, saw a small aluminum homemade tree in the window of a Ben Franklin store.  The tree design was patented in 1958, and began selling in 1959.  They were marketed as Space Age ‘Permanent’ trees. 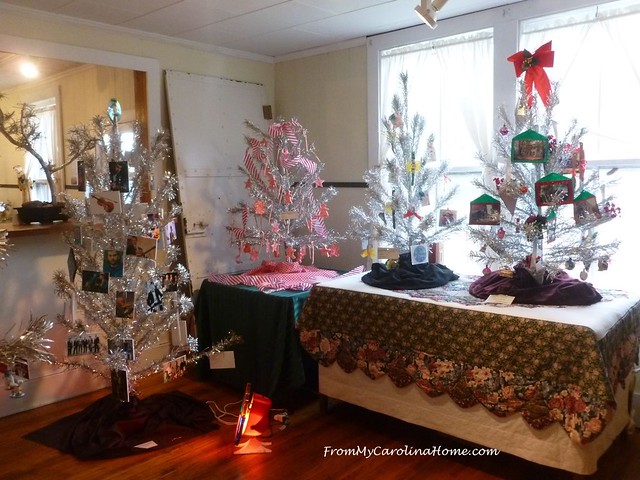 The curator of the collection is Stephen Jackson, who fell into his collection by being the recipient of a gag gift.  A friend of his gave him an aluminum tree rescued from a trash pile for fun.  Later he got more, then began to actually collect them.  They have an interesting history to them too.  They were a big fad in the 1960s. 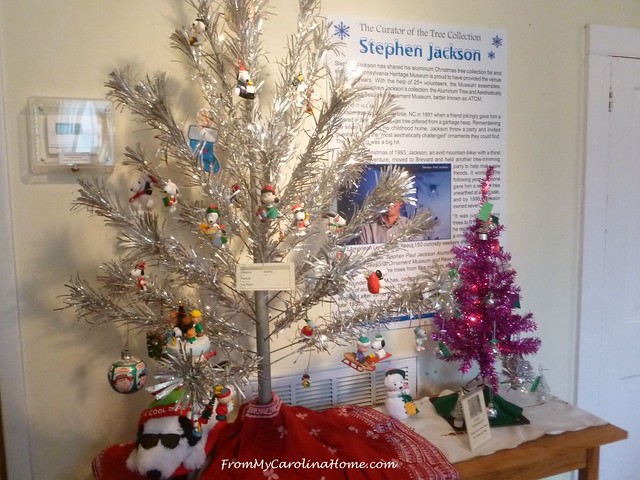 When the television special A Charlie Brown Christmas first aired in 1965, it marked a turning point for the trees as Linus and Charlie Brown deride the commercialism of Christmas.  By 1968, the aluminum tree was gone from catalogs and most retailers.  A few were made into the 1970s, but then they stopped being made altogether. 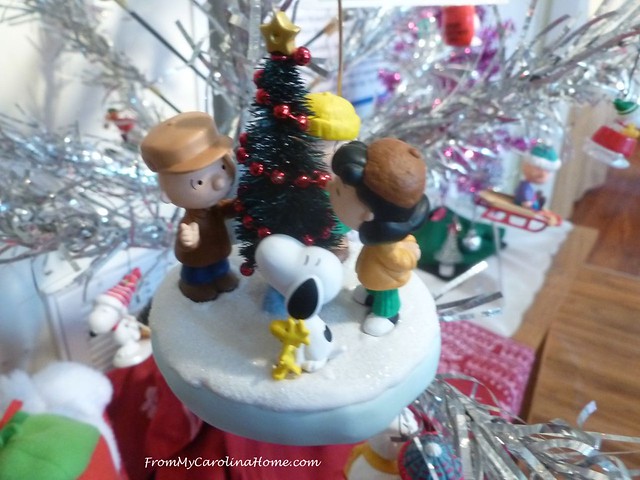 Naturally the museum collection has a Charlie Brown decorated tree with plenty of vintage Snoopy ornaments.  I have a few of those on my tree too. 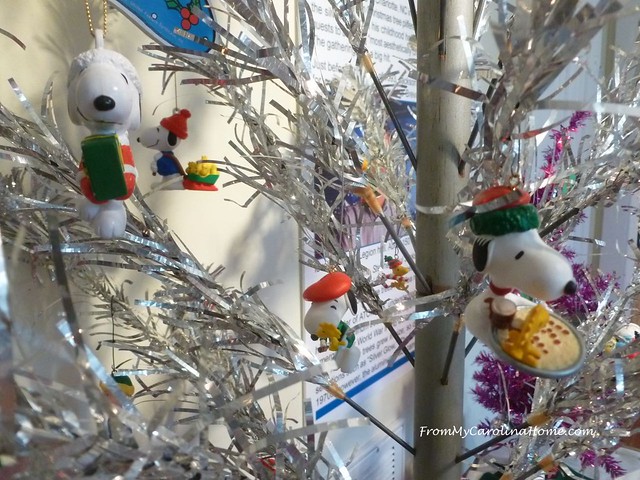 The curator has a sense of humor too, with this exhibit showing the germination and seedling process of growing an aluminum tree. 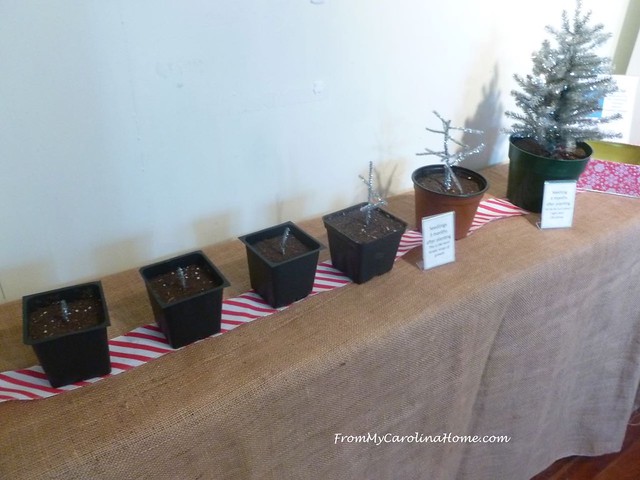 There were a couple of dozen trees in the three exhibit rooms of the house, all decorated with different themes.  This one was Mardi Gras.  At the height of its popularity, there were 36 American manufacturers of aluminum trees along with 3 in Canada, one in Australia and an unconfirmed report of one in the Soviet Union. 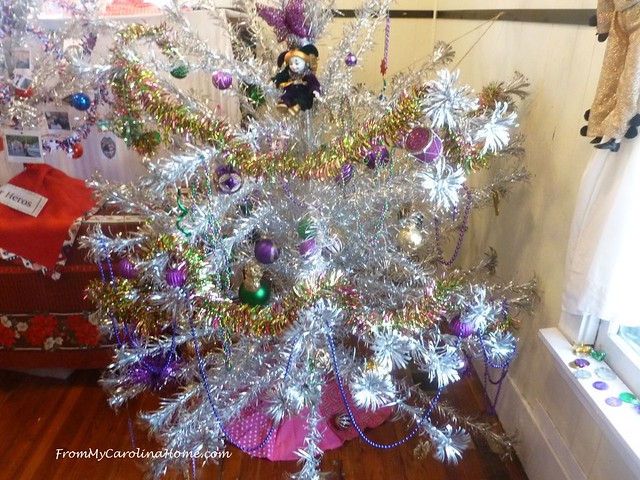 The trees were mostly produced in silver, but they also made them in blue, green, pink, and red.  The ‘needle’ designs included the ‘Twist and Curl’ style seen mostly in this exhibit as well as pom-poms. 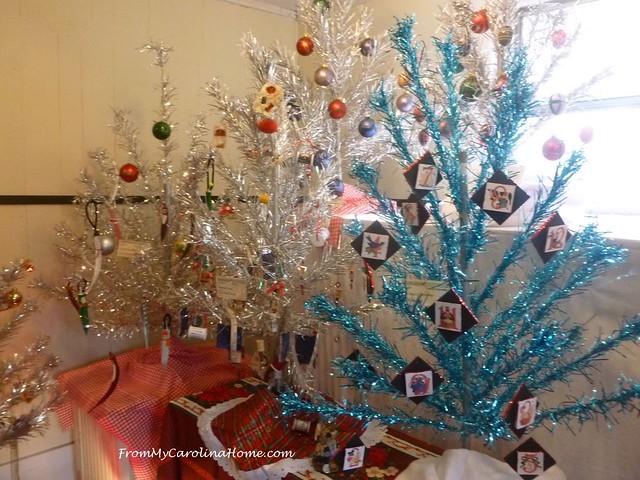 I remember having these ‘Shiny Brite’ ornaments when I was a kid.  Did you have those too?  A lot were needed as there were over one million aluminum trees made and sold in just 10 years by one company alone. 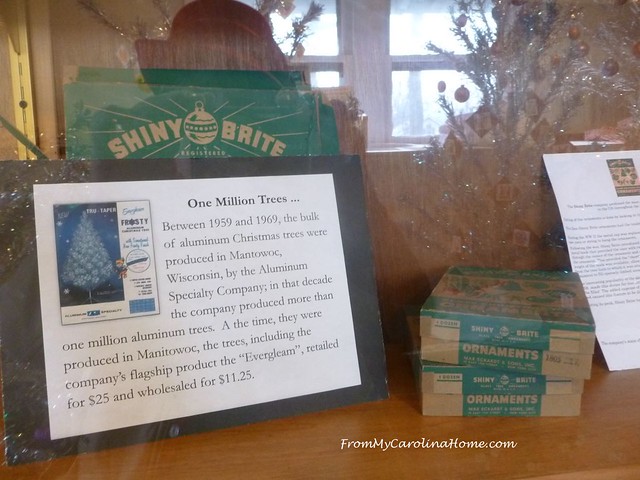 One of the trees had a sewing theme, cute with the measuring tape as garland. 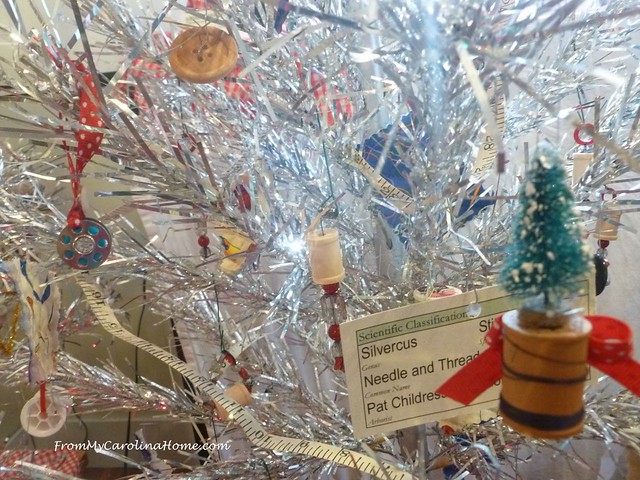 Amazingly, there were a few of the original boxes on display too. 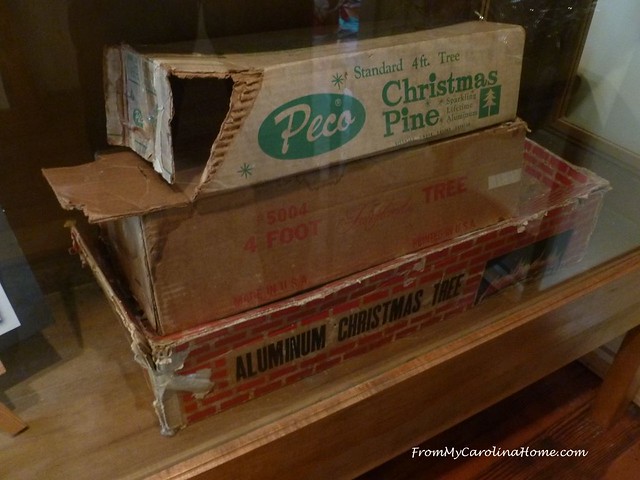 One green tree is in the collection, decorated in a Lucy and Desi theme. 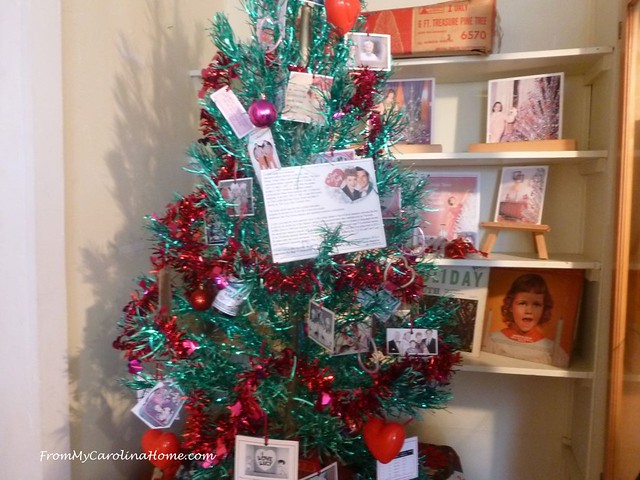 On the shelves behind the tree, several photographs of  real people with their aluminum trees from the 60s, along with a couple of ads.  I do remember my mother talking about having an aluminum tree because it wouldn’t shed needles in the carpet, and I believe she got her way one year.  But, I cannot imagine my father being happy with that, as we had real trees every other year. 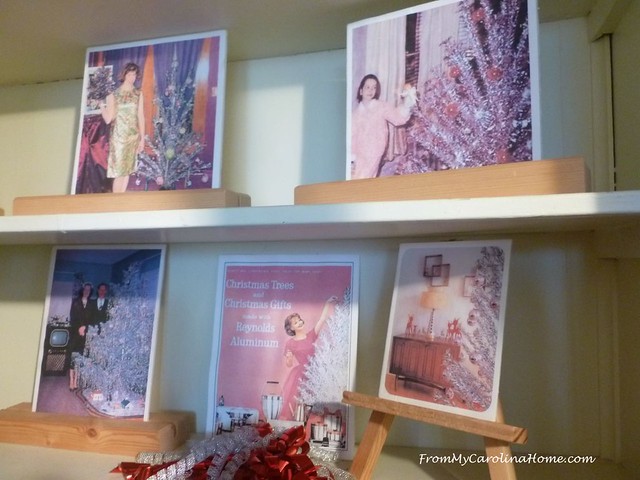 I do believe we had one of these lights on the floor here, that rotated colors.  But I seem to remember that it was outside projecting the colors on the front wall of the house.    The tree on the left below was decorated with pictures from Brevard from the mid 1900s. 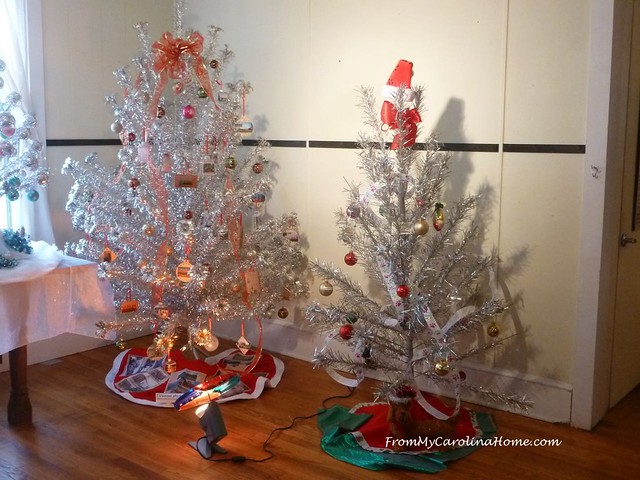 A Halloween inspired tree on the right, sits next to a red and silver themed one. 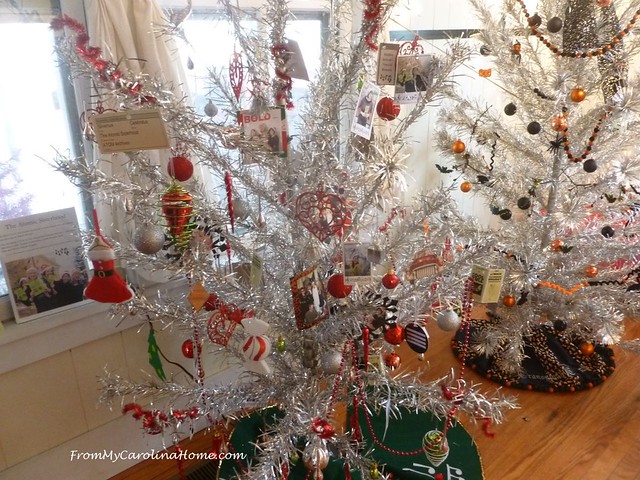 Trees were made in all sizes, ranging from as small as 2 feet and up to 8 feet tall.  There were several table top size trees on display. 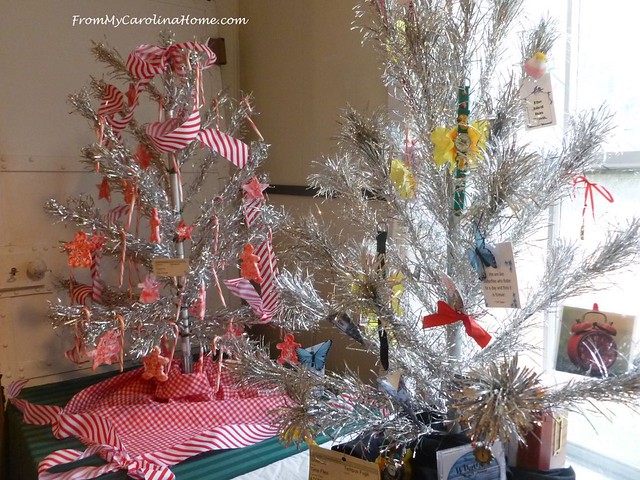 These vintage trees are now, as you might expect, somewhat collectable, with larger ones in mint condition going for over $700!  Not bad for something rescued from the trash heap!  I hope you enjoyed the trip to the museum.

I did a tour of the local B&Bs Christmas decorations a couple of years ago, if you are in the mood for more.  See the Holiday Tour of Inns post for the first part.

28 thoughts on “Merry Christmas and a Holiday Treat!”