My sweet neighbor that just moved to a senior independent living apartment was cleaning out her sewing room in March preparing for her move. She had a box of what she said was “blocks ready to put together”, and asked me if I wanted them to do a charity quilt. I said sure, and took the box home without looking at it. I was busy with other projects until the end of April, and it was then that I opened the box. But what I assumed was just blocks, turned out to be a half finished quilt-as-you-go.  There were five rows of four blocks per row put together. 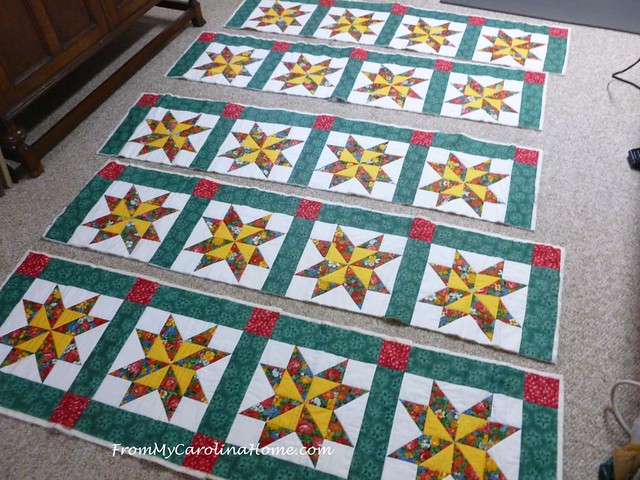 As typical for this kind of construction, the block joinings are left open on the back at the edges.  She intended to whip these down by hand after the rows were sewn together.  She had done some hand quilting on the stars and some but not all the border pieces. 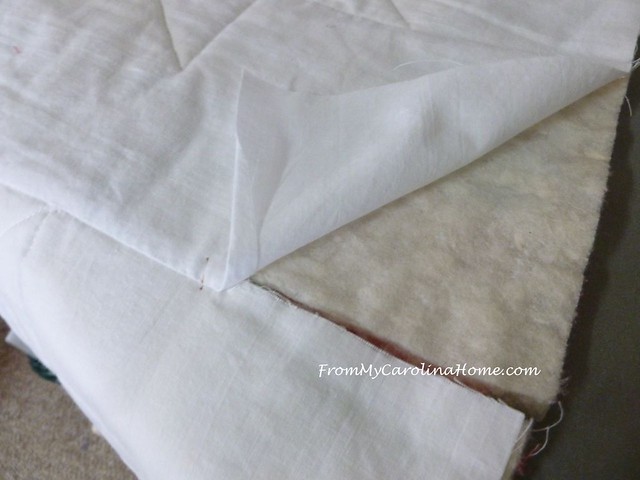 I began by lining up the rows. 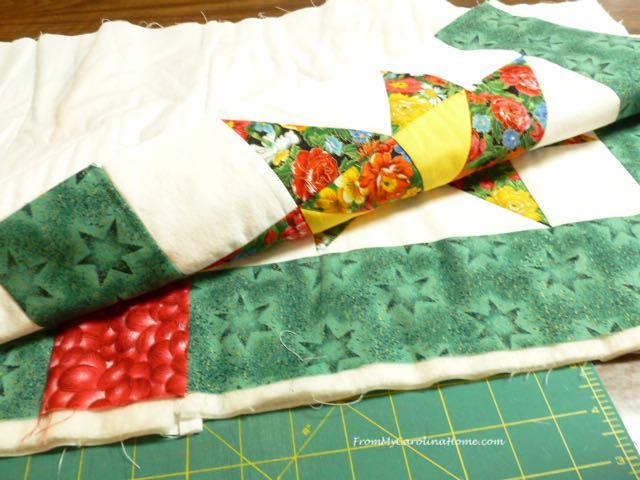 Folding the batting and muslin backing out of the way, the quilt is pinned to ensure the sashings line up. 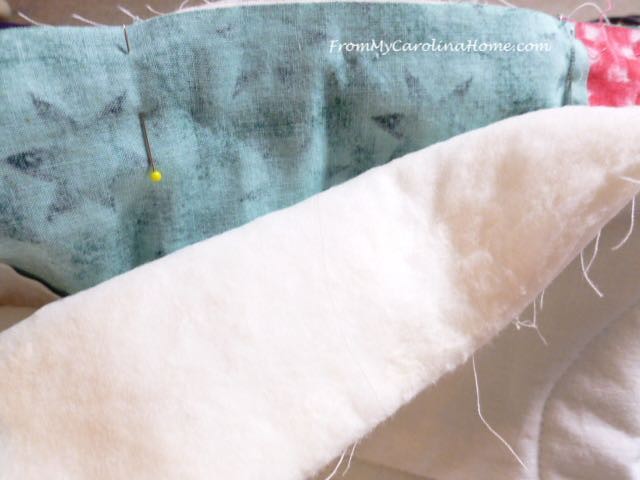 The seams are pinned and sewn one at a time. 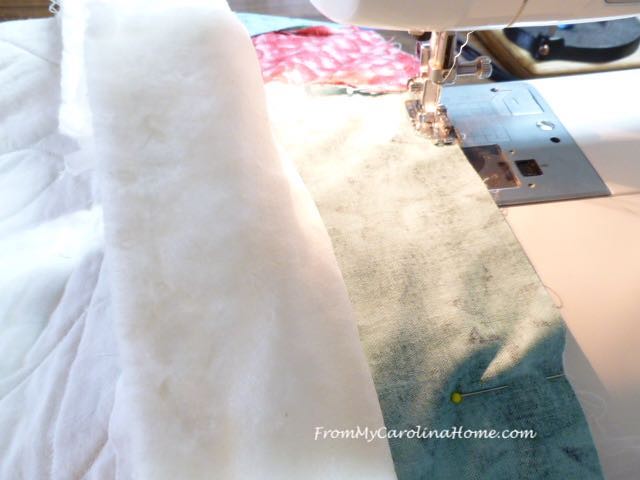 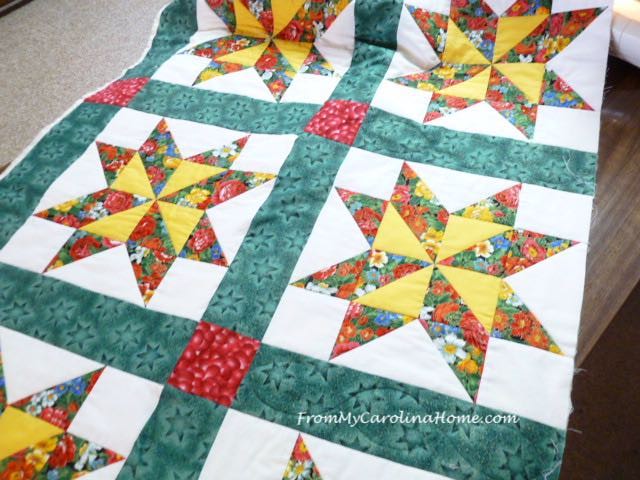 Within an hour or so, I had the top assembled. 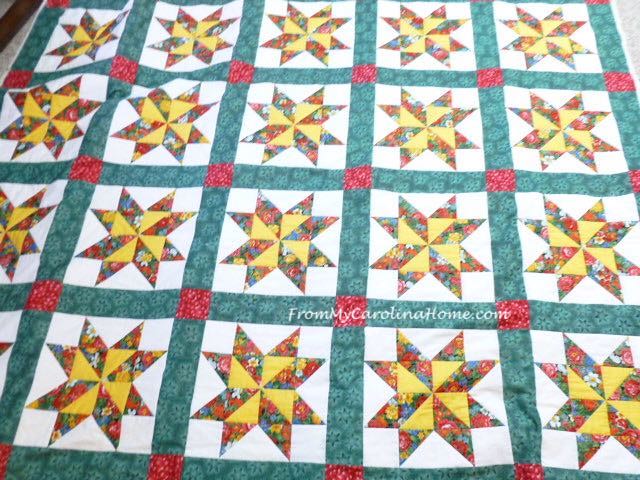 I turned attention to the muslin back. I really didn’t want to do the handwork that this would require, plus I didn’t want to hand quilt it.  So, a creative solution was needed. 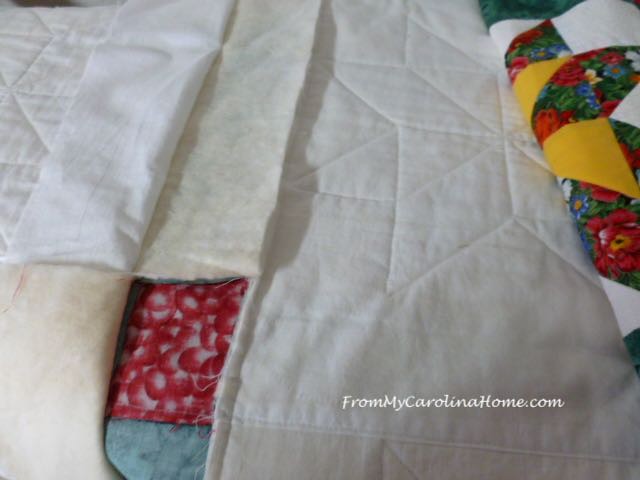 I decided to use some very light weight fusible webbing to stick the loose edges down on the backside.  Each section was carefully pressed, trimming excess batting to make the batting layer even. 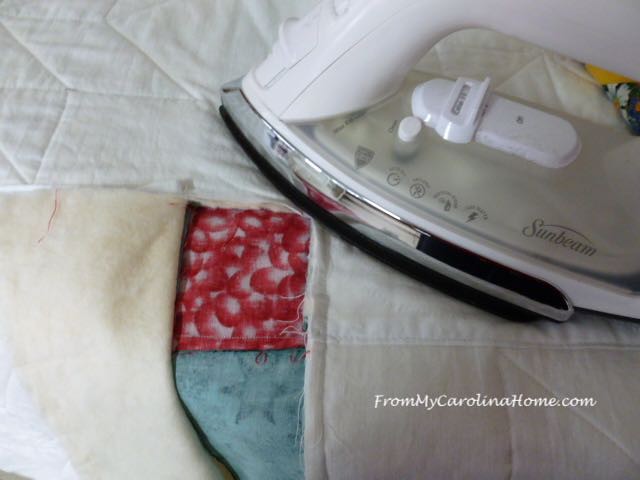 In the stash was a bolt of this nice little star print that would make a wonderful new backing. 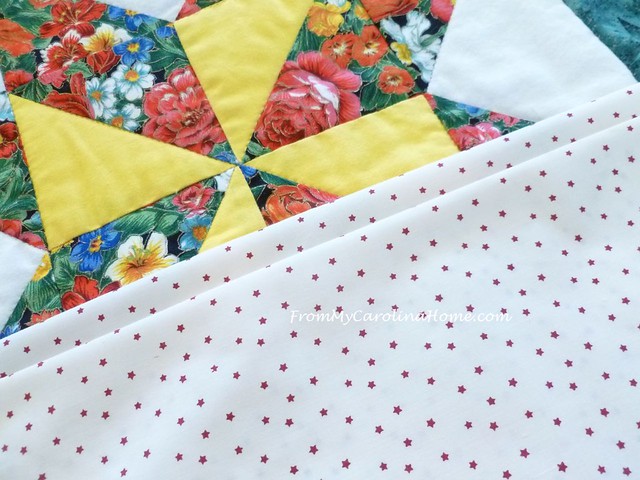 The new backing was loaded on the longarm, and the quilt top floated over it with its batting and backing intact.  I smoothed it out as best I could, making sure all the muslin was flat as an inner layer. 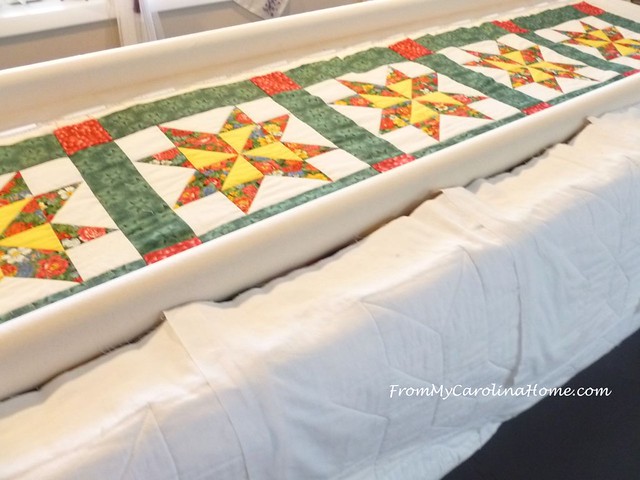 I used a gentle curved pantograph. 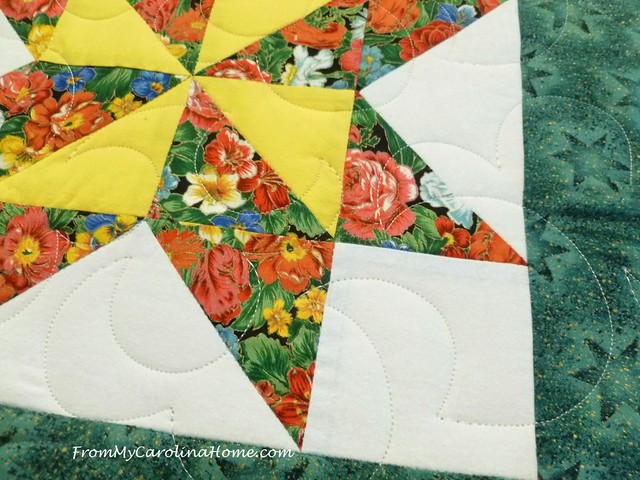 White Glide thread on top with Bottom Line in the bobbin. 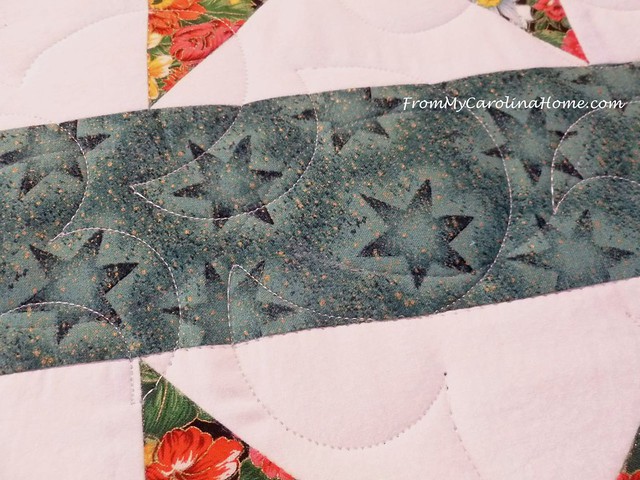 I left her original quilting, just put mine over it. 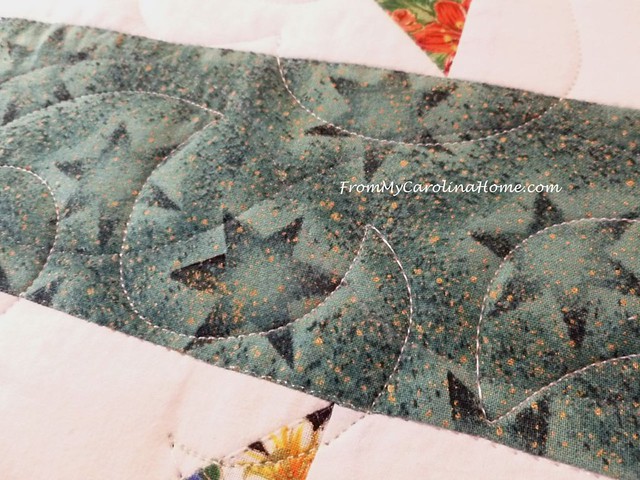 The quilting went nicely, and I liked the soft textured look. 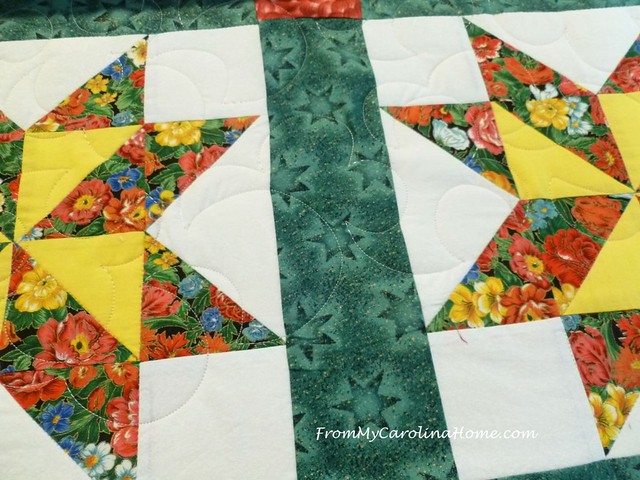 The next decision was what to use to bind it.  I had plenty of the backing print, but there was also a fair yardage of the floral print in the bin. 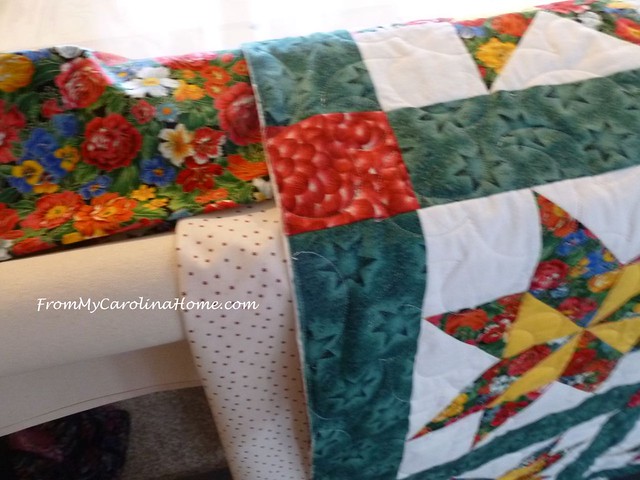 I thought the floral would look nicer, so I went with that. 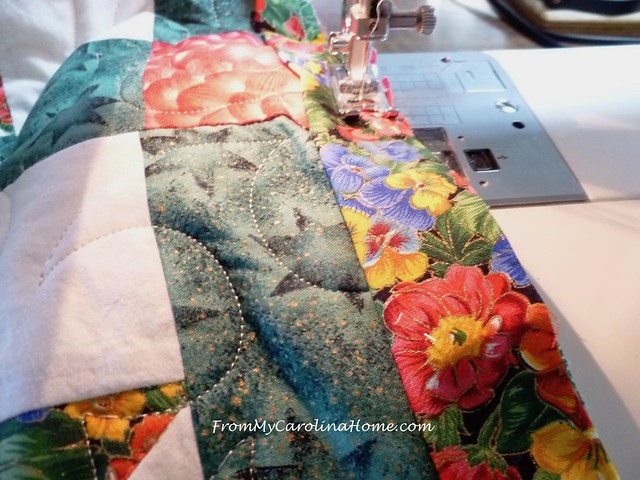 A few nights of hand stitching the binding to the back and it was done. 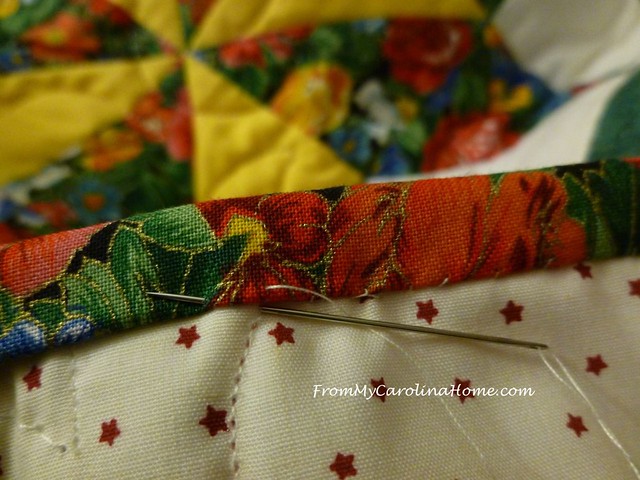 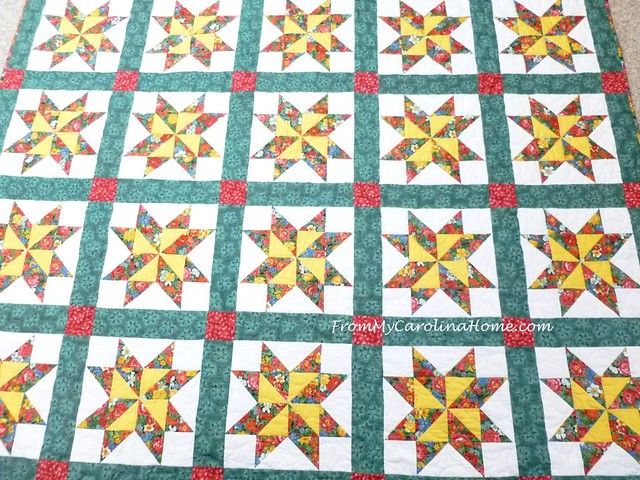 With the leftovers of some extra fabric,, along with two blocks that were different prints, I thought a couple of pillows would be nice to add to it. 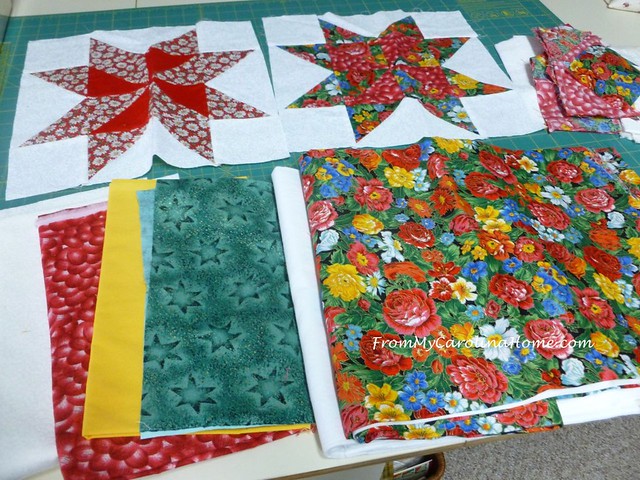 I cut strips, added borders to the blocks, stuffed them and closed them with topstitching. 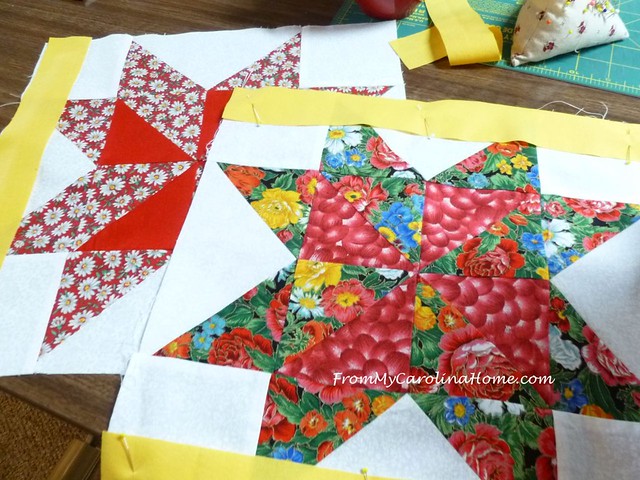 So, now there was a colorful quilt and two pillows, nice for a sofa or a bed.  I delivered them back to her as a housewarming gift.  I asked her if she recognized it, and at first she thought maybe she had seen the design before.  After a moment her eyes widened as she realized it was her quilt, started but not finished.  She was delighted!!  Her living room needed some color, and she put the quilt on the sofa with the pillows. 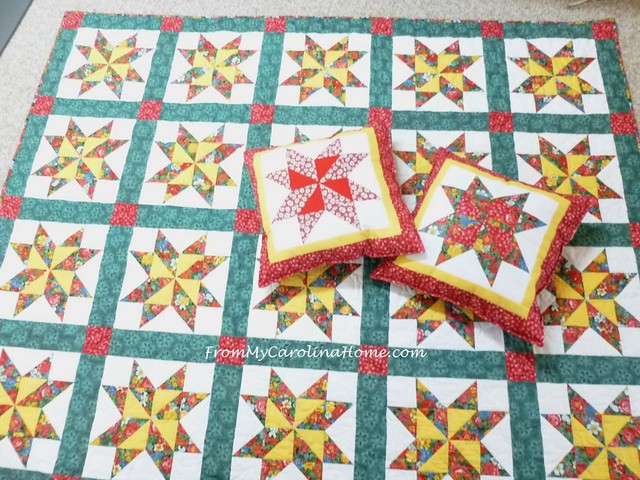 She said she was going to wear it out, and that her son couldn’t have it for a long time, LOL!!  I was so happy I made the decision not to donate it as she originally said.  Sometimes you just have to follow your heart, don’t you think? 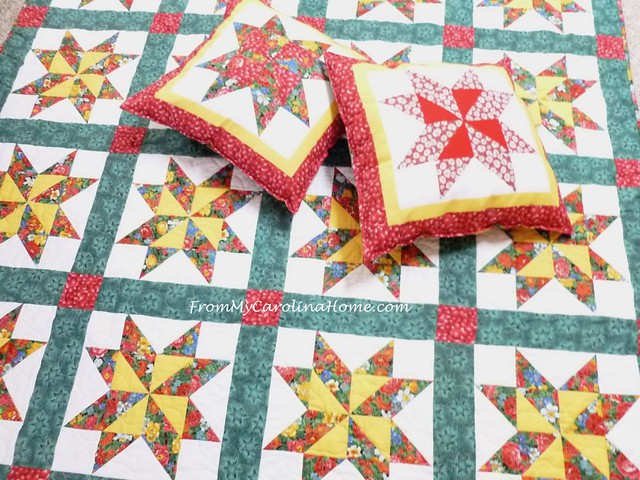 56 thoughts on “Salvaging a QAYG”