Finally, we have some warmer days!  It seems like winter just keeps hanging on, but Friday was warm and sunny, and Saturday was perfect for a drive.  It is supposed to rain all day today, so I am glad I got some pictures of the garden.  Flowers are starting to show their colors a bit more.  These daffodils were blooming earlier in the month and are all done now.  They didn’t all bloom, but the ones that did were lovely. 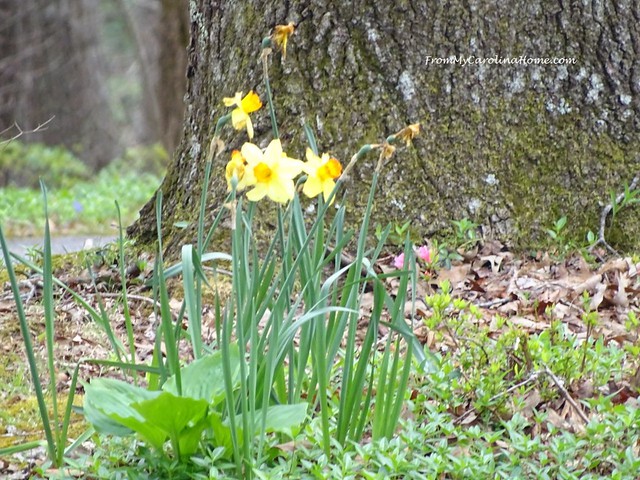 The redbud tree is coming out and the bees are all over the pretty pink flowers. 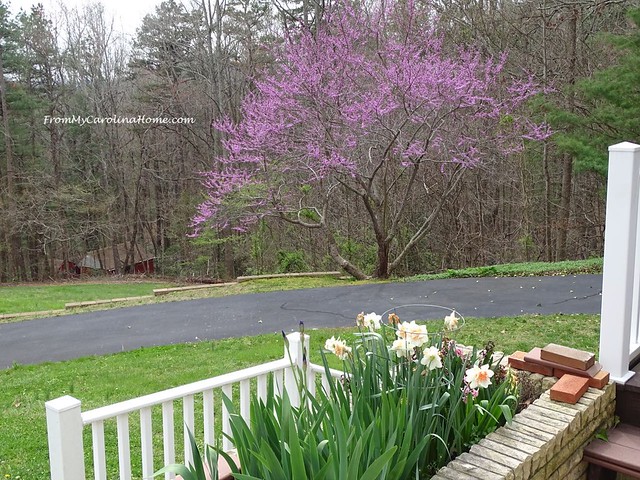 The hyacinths bloomed nicely, and were so fragrant!  I’ve never had a whole bed of hyacinths before now.  The colors were so pretty. 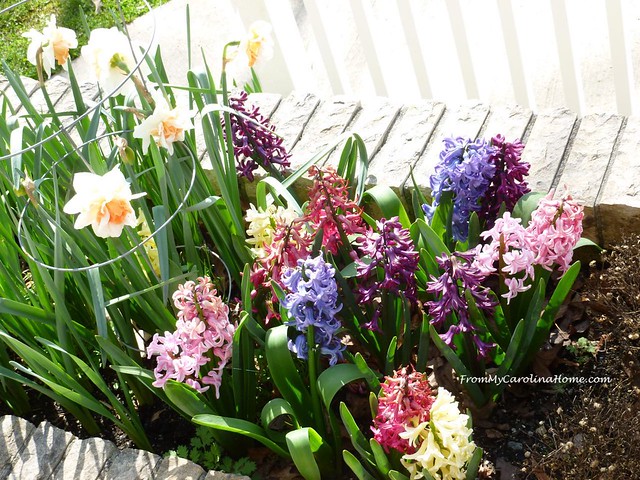 Next to the hyacinths, the gorgeous double daffodils bloomed. These were so beautiful, creamy petals on the outside with a lovely apricot petal center.  The blooms were long lasting as well, staying lovely for almost two weeks.  I think every bulb put up a flower, well worth the planting time. 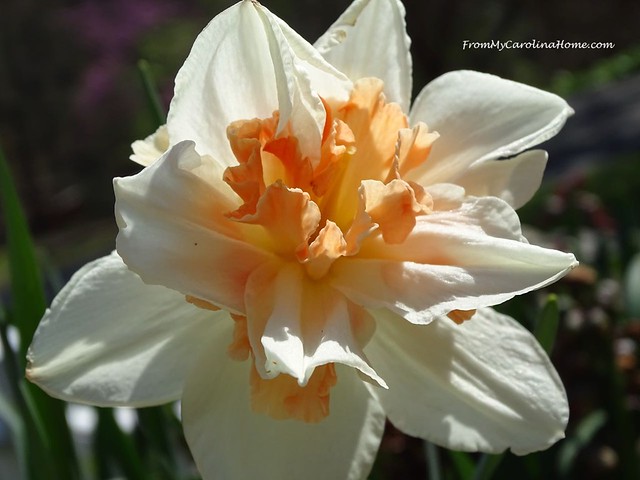 A few days later, the irises in the planter came up, and bloomed. I have to say I am disappointed that they are purple. I already have two beds full of purple ones, and really was hoping for another color. But alas they aren’t, so when they are done, I’ll be digging them up and giving them away.  These are almost fully open. 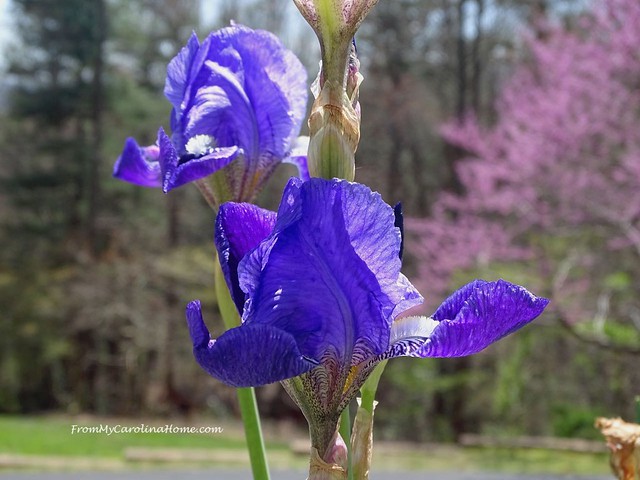 Well, maybe I’ll keep a few as they seem to be a deeper color purple, with a bit of a stripe on the beard that is pretty.  The falls are a bit darker than the standards. 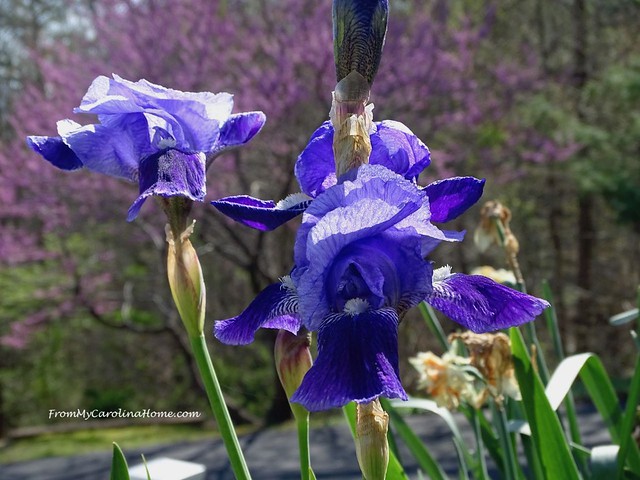 It is mating time for the turkeys, and this male was trying his best to get the attention of the two females. They pretty much ignored him. 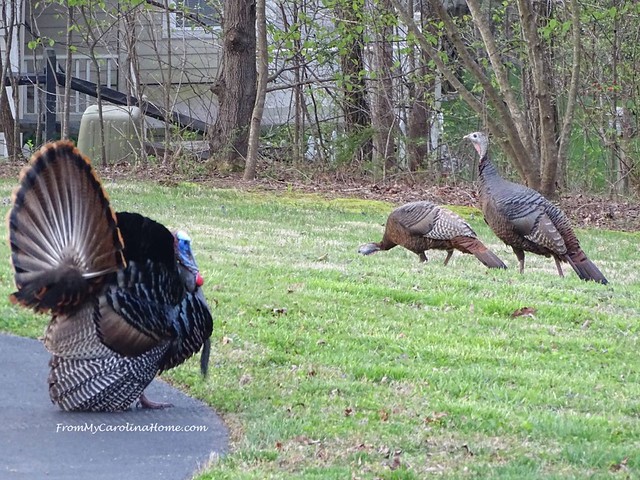 He has been strutting his stuff every day for a couple of weeks now. Magnificent, isn’t he? Well, at least he thinks he is, LOL!!  Still, the ladies just go about looking for seeds to eat, and don’t pay any attention to him, despite his best efforts. 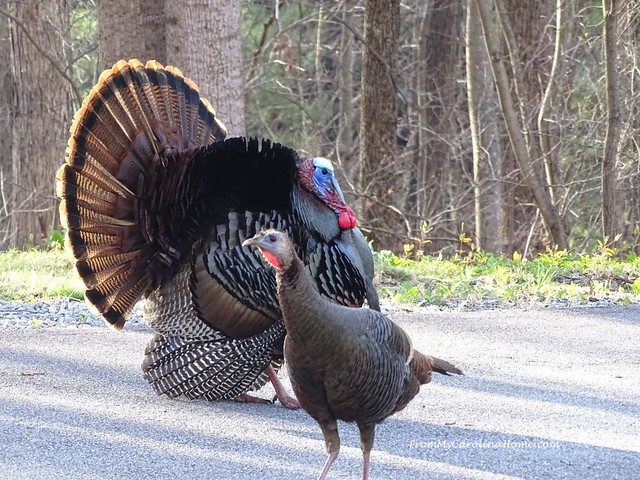 He just keeps trying, this was yet another day.  Puffed up like this, he is twice his normal size. Of course, I am still giving them bread, but he isn’t interested in eating. The ladies come up to get their treat, but he continues to strut around. 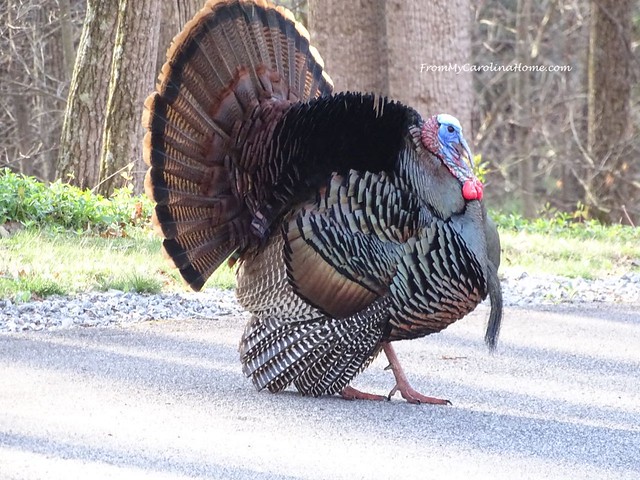 On the backside of the house, my little clingstone peach is loaded with blooms.  Once again this summer, I will race the bears to get the fruit as it ripens. 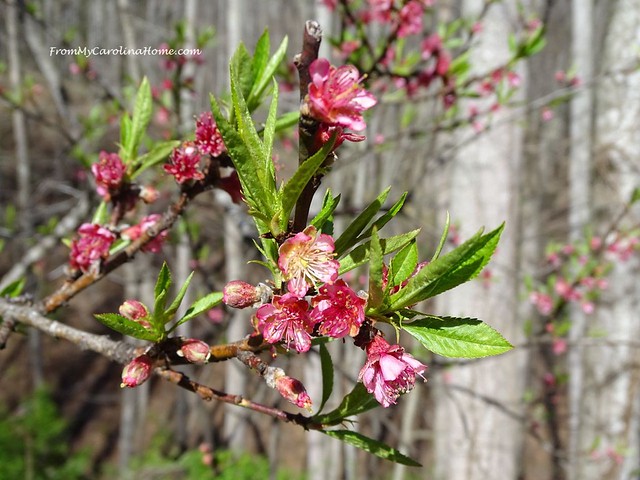 Then, early one morning, I looked out to the driveway to see this guy.  He looks like a sweet little kitty, right? Not!! This, believe it or not, is a North Carolina mountain bobcat, weighing around 35-40 pounds. I got one picture, and as I quietly tried to get outside to get a better shot, he ran off.  His feet are huge. 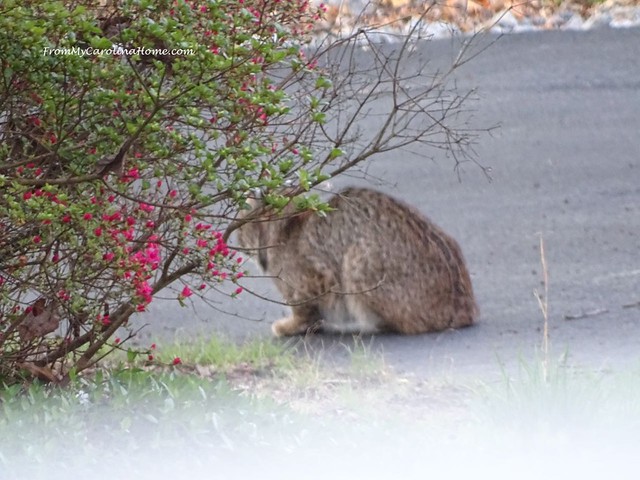 I had several areas of ajugas on the lawn in front and back, but the first grass cutting this week took them all away. 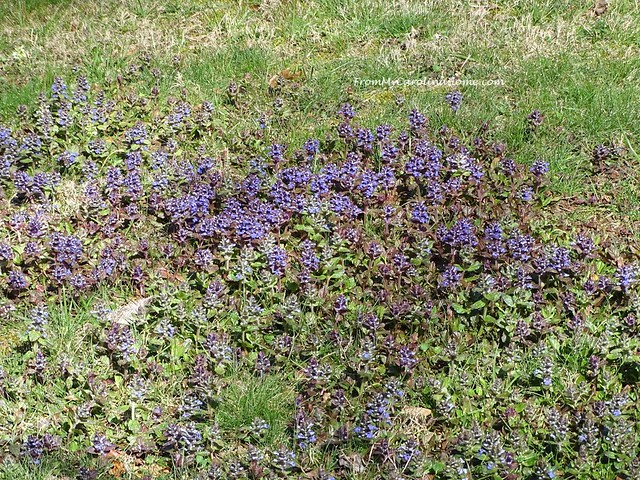 I think they are lovely, and wish the mower would have left them for another mowing day after the blooms were done. 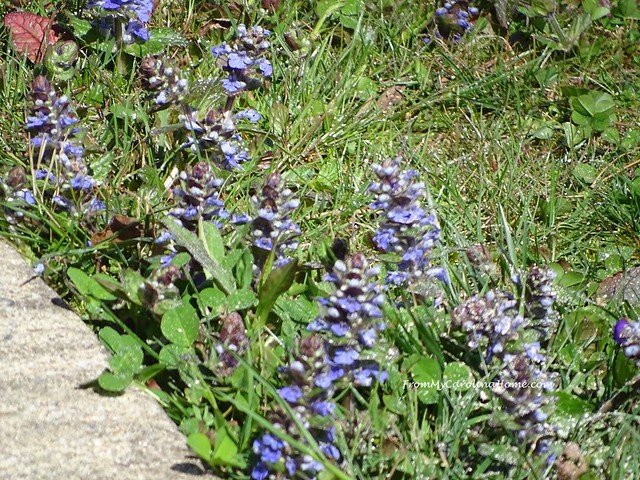 A week later and the redbud is really starting to come out.  The hyacinths in the planter are done.

Such a vibrant pink, and the large bumblebees are taking advantage of the pollen. 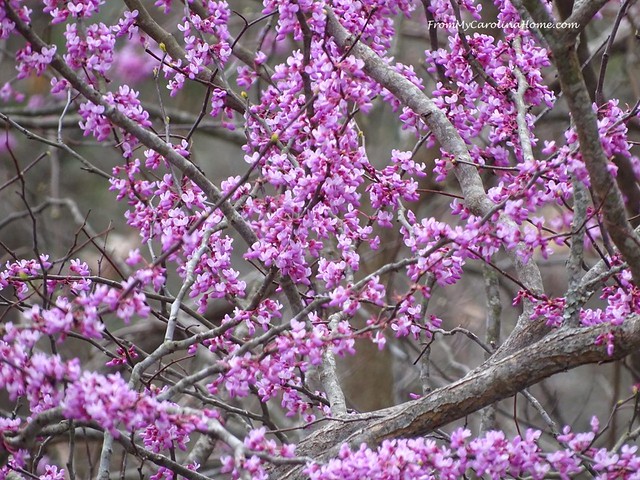 In the front bed, the tulips are starting their show.  It seems like I won’t get many this year.  I do need to get out and weed that bed.  It has a bunch of clover in it. 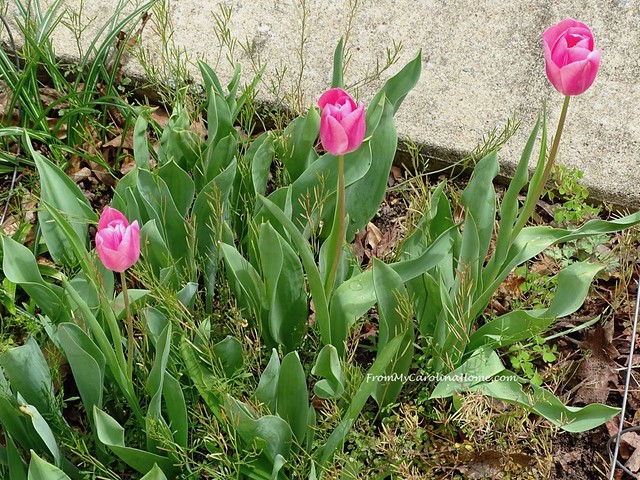 I thought I’d try an artsy shot, the redbud in the background is still blooming.  I took this picture on Friday. 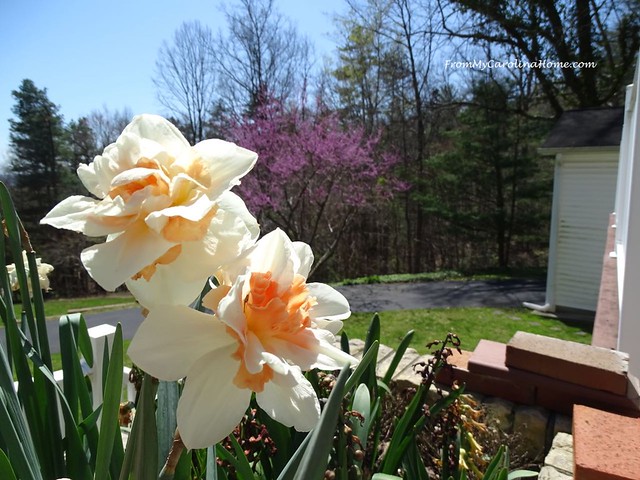 I have tried many times to get a picture of this pair together, when the male is offering the female some choice seeds.  He will feed her the seeds as a courting ritual.  It is just so sweet to watch. 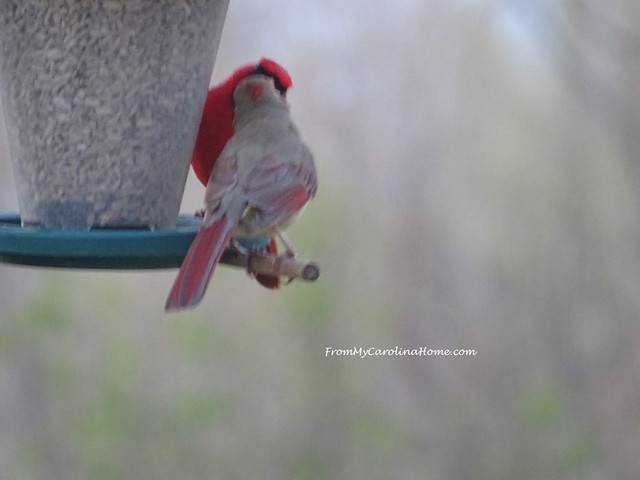 Guess who was back again, still strutting and still being ignored.  I haven’t named this one.  He isn’t too interested in getting handouts, but the ladies still come up when they see me with bread in hand. 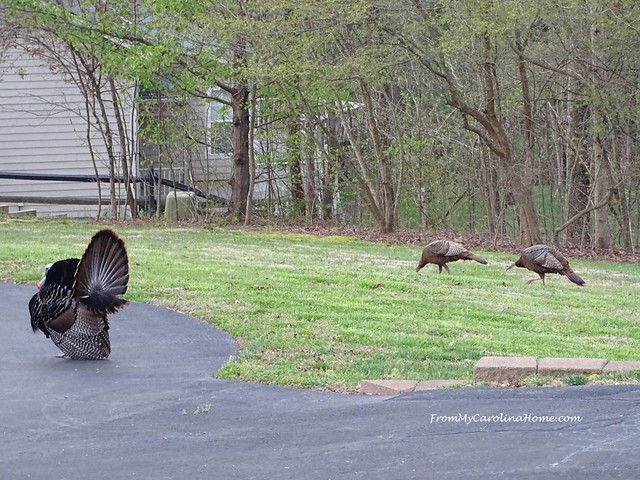 My white azalea did get freeze damage again this year, all those brown spots. 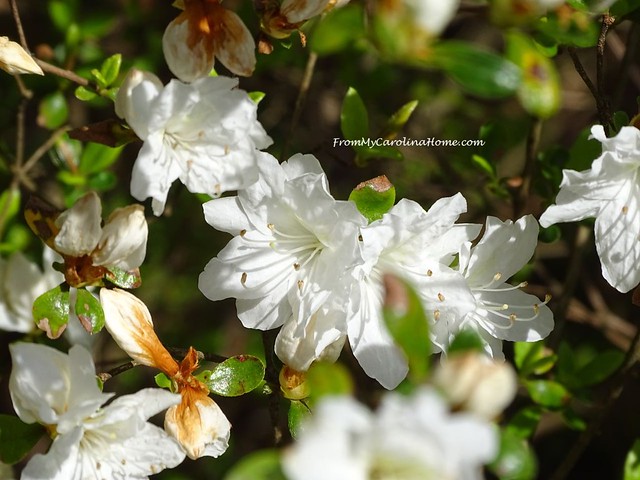 The azaleas are just now beginning to bud out, and should be at full bloom in another week or so, providing we don’t have another freeze.  The trees are still bare, just now beginning to produce leaves at the very tips of the branches.  You can still see the mountain to the east through the trees.   Pretty soon the foliage will cover that view completely. 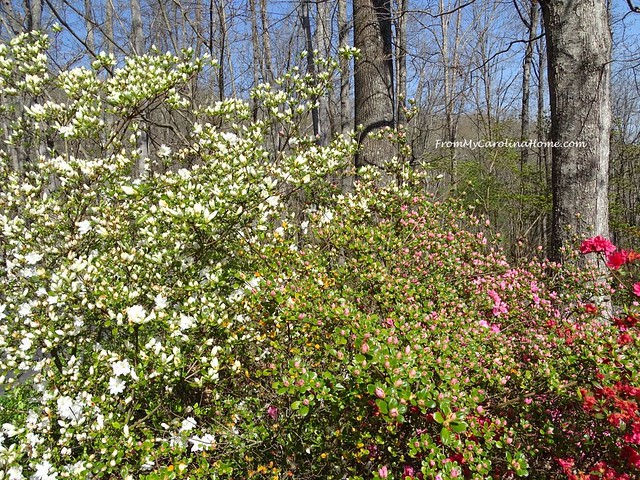 This view of the valley was earlier in the month, an early morning fog settled into the low areas.  Sometimes these mountains do live up to the name Blue Ridge. 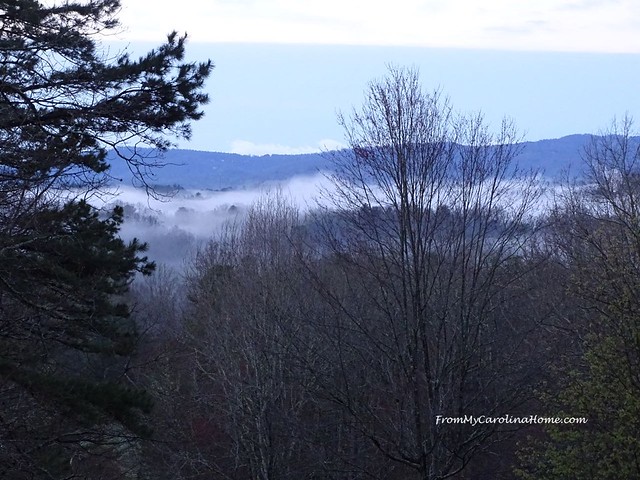 I really do love these daffodils!! I think this fall I’ll try to get more of these double bloomers. 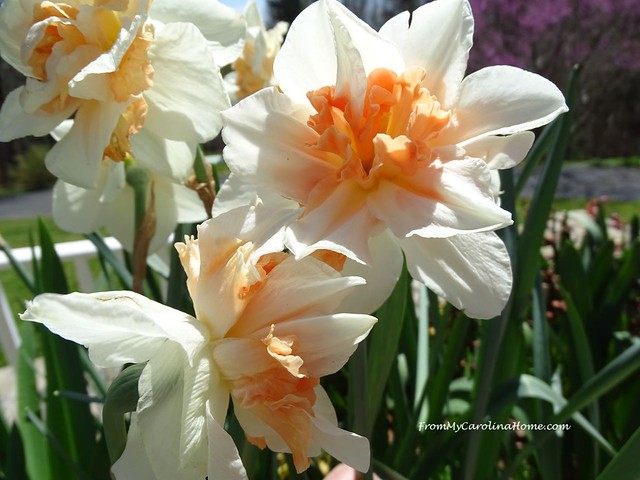 What’s going on in your garden?

Huge deals right now at Amazon, $5 magazine subscriptions including Birds and Blooms, Country Woman, Taste of Home and Bon Appetit, and many more! Some available in Kindle editions too. Shop Amazon – Deals in Magazines 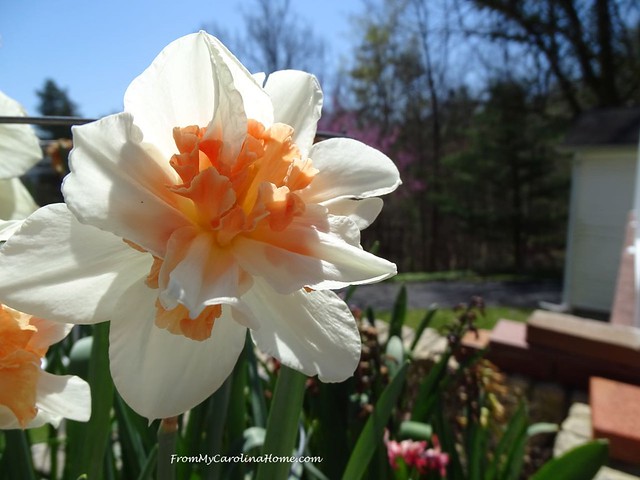 35 thoughts on “April in the Garden”