Last Tuesday, friends gathered for a sewing day to begin the process of assembling the blocks received for the California Fire Quilt project.  I asked everyone to just bring a dish for our potluck lunch, and no sewing stuff, as using all my machines helps to keep them in working order. Picture heavy post coming!  Two sewing areas were set up with two machines on each one so we could work on two flimsys at once.  I turned my Brother machine around to the other side of the table so someone could use the Kenmore at the same time.  This station was set up for two sewing and one to press and help with pinning. 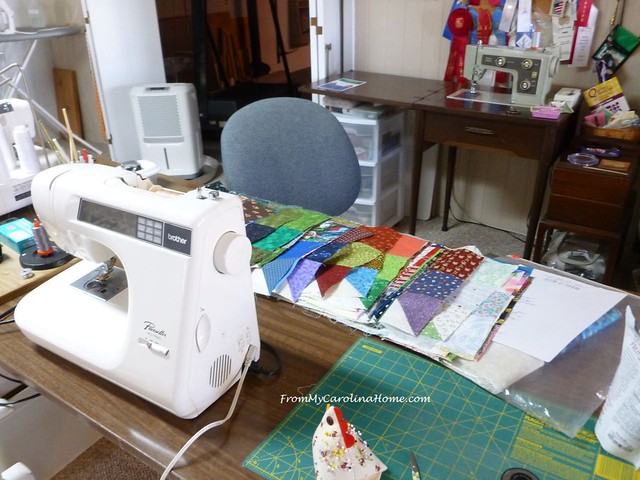 I had pulled a set of 56 blocks for this group to assemble into a flimsy.  The instructions for this setting were written out, and I went over the plan with this team before we started. 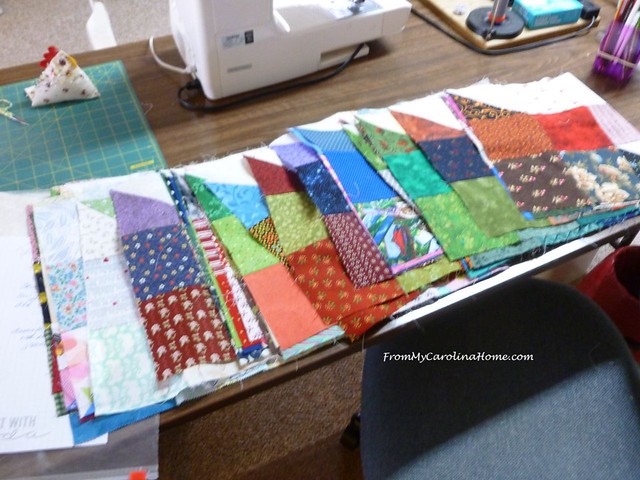 This group of three worked on the mountain peaks setting.  I’m just calling it that, I am not sure if it has a name.  The darks and lights are arranged with the darks pointing up and the lights pointing down, and the peaks offset by one block.  The ends all have a half peak of one block, alternating the ends.  We piddled with the placement, moving things around for several minutes, then just before picking them up I remembered to grab the camera to get a ‘before’ pic. 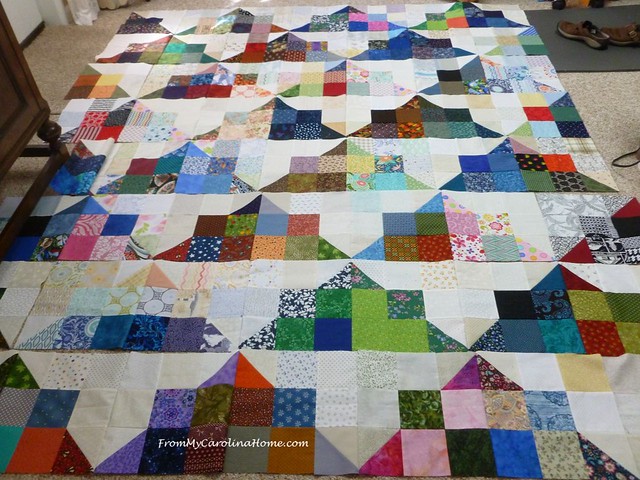 Each row was then labeled with its row number and which way to press the seams to keep that straight. 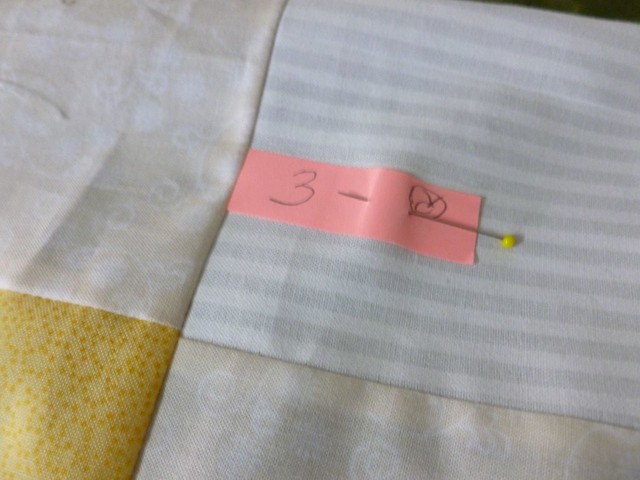 With three working on the quilt top, the work went nicely.  It was so helpful to have one to assist with pinning, then do all the pressing. 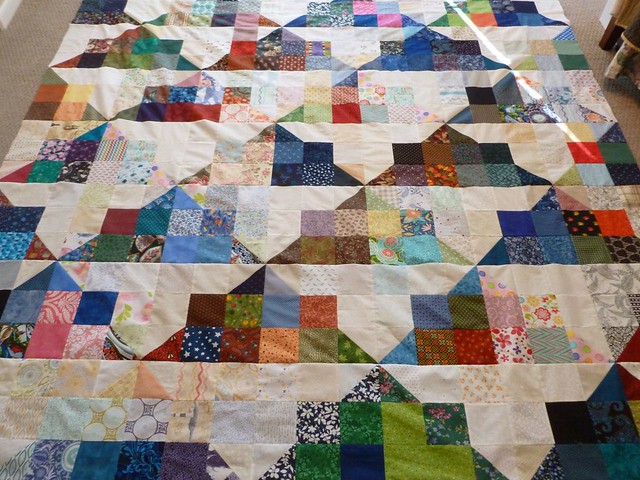 At the end of the sewing time, there were only a couple of seams left to join the big pieces, so I did that before stopping for the day. 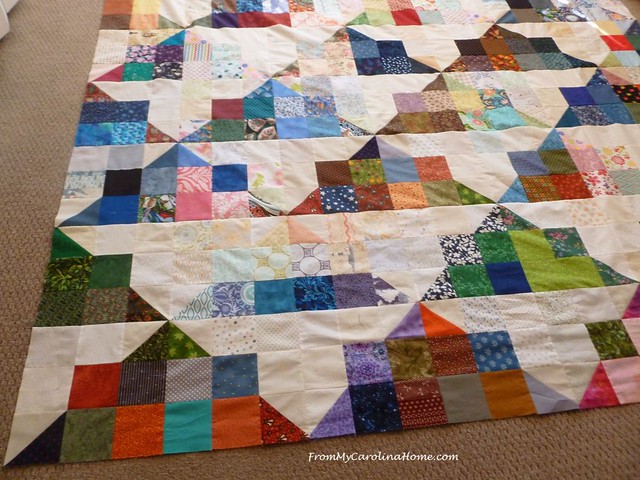 Thank you to Bonnie, Carol and Marti for all your hard work on this one!! 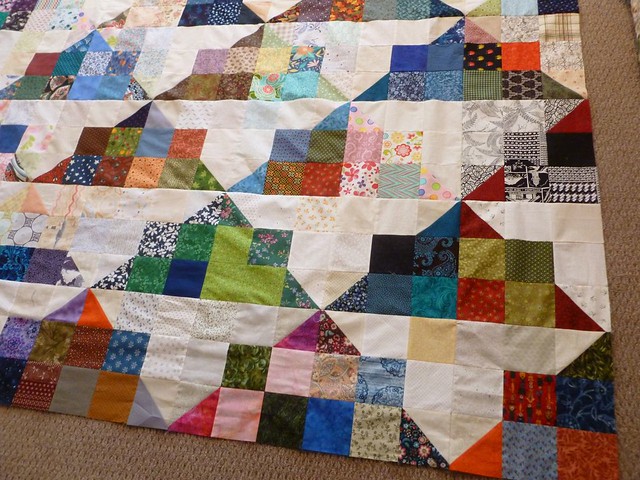 Is your block in this quilt? 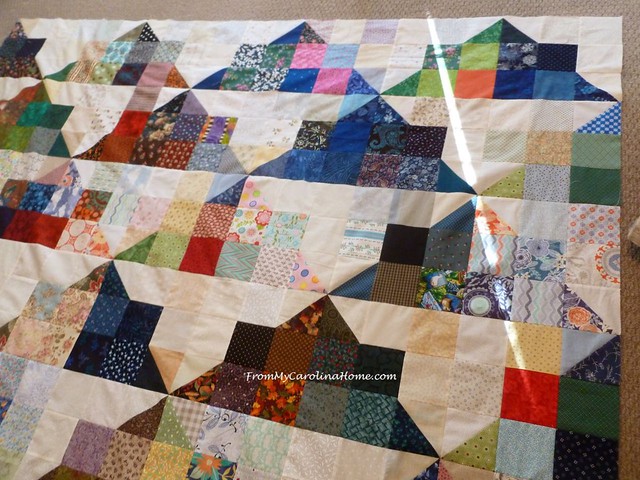 One more close view of the other corner. 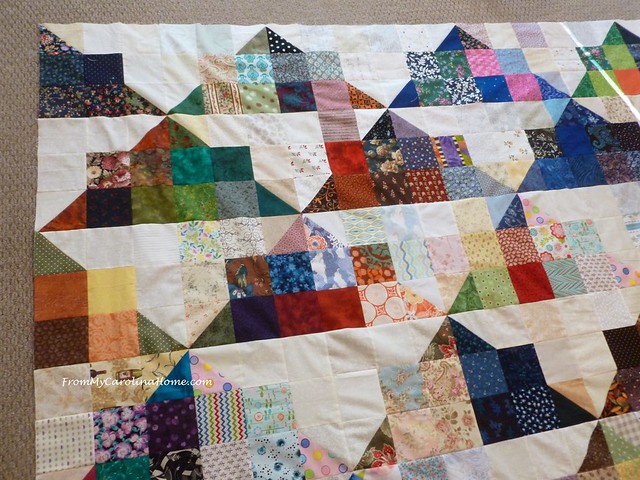 On the table, two more machines were busy that same day as Bridget and Sam worked on a second quilt flimsy design.  Again, I had pulled 56 blocks and wrote out the instructions for this design.  I planned to help this team as the third member. 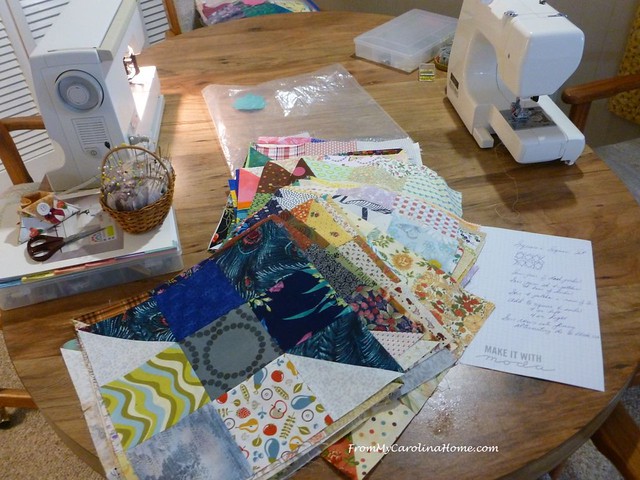 Laying it out on the floor in the back area where I keep my plants and stamps, we could rearrange the blocks into the square in a square design. 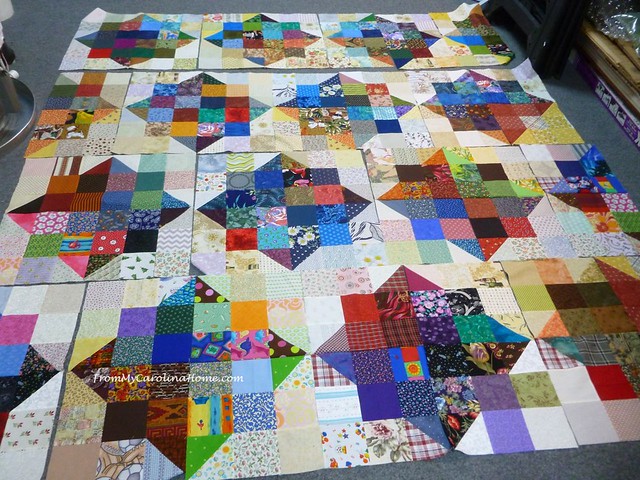 Everyone came in to see, and we spent quite a bit moving colors around.  You can see the bright pink sticky notes we used to mark the rows A-D, since these rows were two blocks deep per row assembling the large squares first.  Here we wound up with the same fabric in two blocks side by side on the bottom row (the green print and the white tones), funny after mixing up the blocks that we managed to put those two together again.  A quick flip with another block solved that. 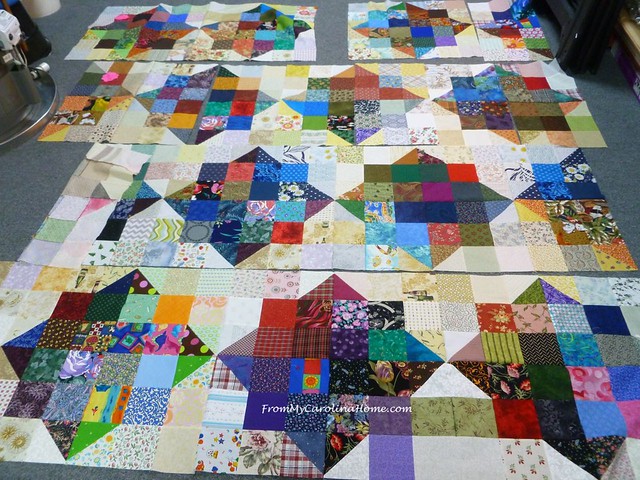 And still we messed around with it, redistributing the yellows, paying attention to the reds.  Finally, it was declared good, and sewing began in earnest. 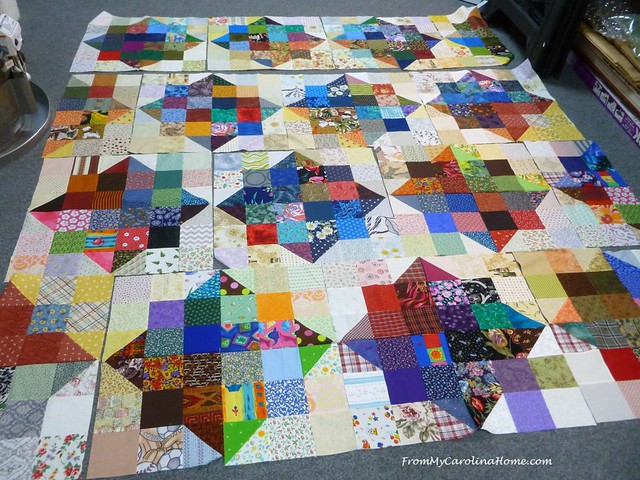 I worked on ripping out the last of the stitches on the first quilt that I showed you on Friday, then went to get our lunch in the oven. I totally forgot to take any pictures of the wonderful food!! We ate really well!! Chicken pasta mushroom casserole, califlower salad, baked zucchini, homemade bread, green beans with an herb accent, and hummingbird cupcakes. Yummy!! 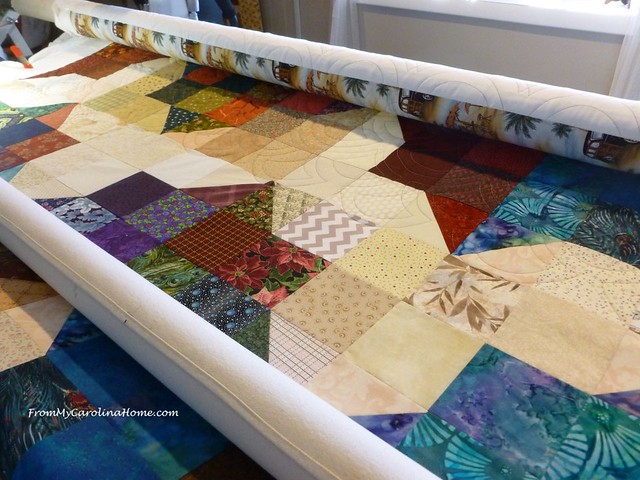 At the end of the day, the second quilt was almost done, just a few seams left to do. I wasn’t able to help pin as much since I had to work on the ripping out the stitches on other quilt.  So, on Friday, I went ahead and got the rows assembled into the flimsy. 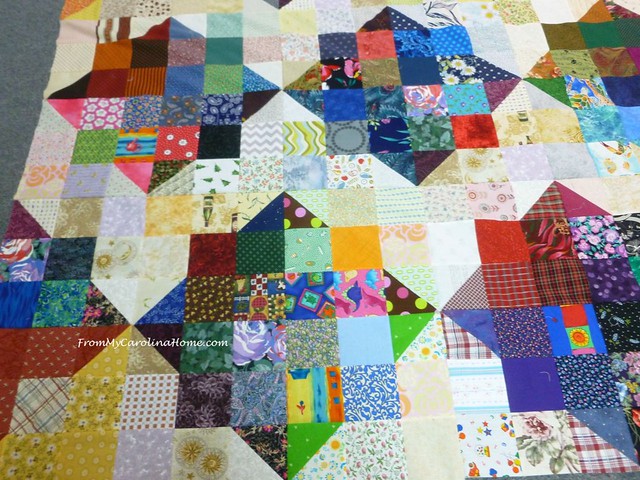 Maybe you see one of your blocks on this one. 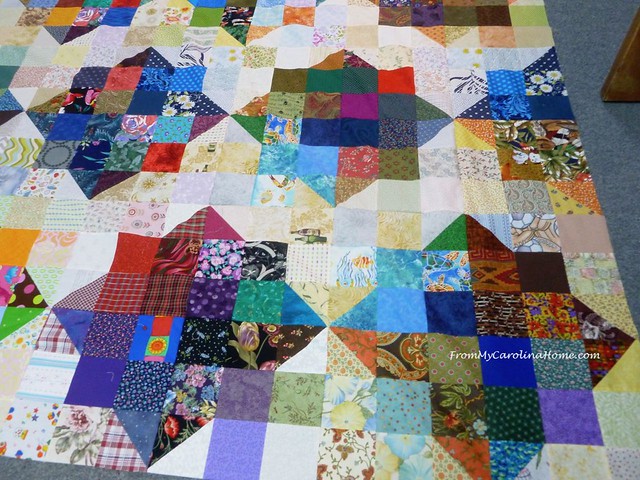 We put the half-squares on the ends to make the quilts 7×8 blocks, alternating sides. 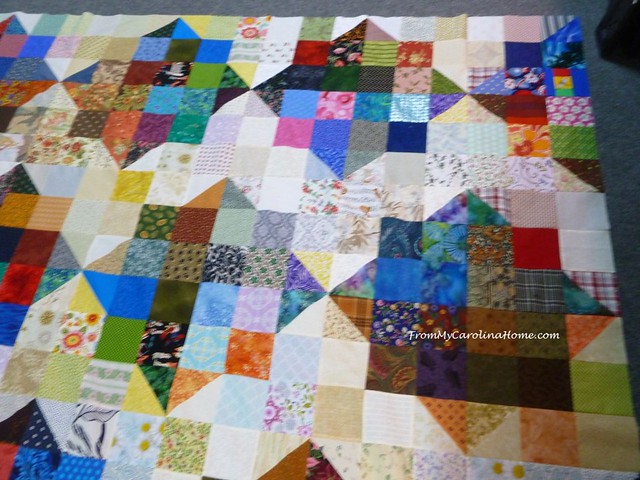 The wide array of colors and prints makes this one a fun design, almost could be an I Spy too.  Can you find the little dog? 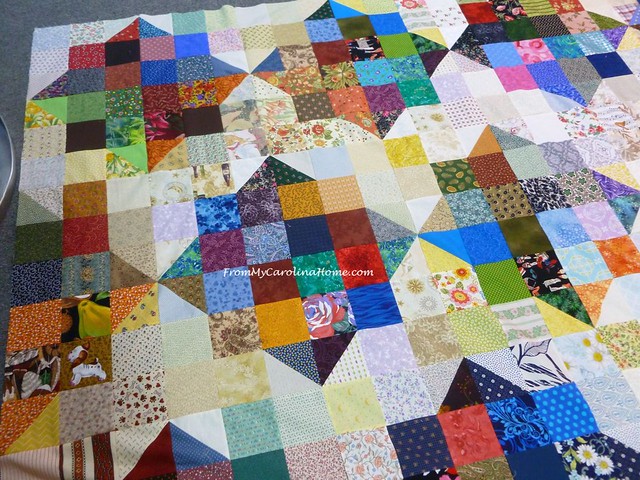 One more bit of news on this project.  My neighbor’s son who will receive one of these quilts was in town this week for a sad reason.  His father passed away, so he came for a few days to help his mother with the arrangements.  They planned to move in March, and she still plans to do that so he will be back to assist her move and sale of her house.  While he was here, I asked him and his mom to come up to the house for a visit without telling them why, only that I wanted to show them something.  When he got here, I showed him the three quilts in progress, told him about the Fire Quilts project, and asked him to choose the one he wanted.  He was really touched by the outpouring of support, and chose the zigzag one below.  He and his wife want to send their sincere thanks to everyone that participated in the project, and to tell you that the quilts are beautiful.  I went ahead and made the binding, and got it sewed on the this quilt.  The handwork will take a while, but I need something to do while the last of the football games are on, and I really do enjoy the whip stitching.  I’ll have the binding done by the time they get back and will deliver it to them then. 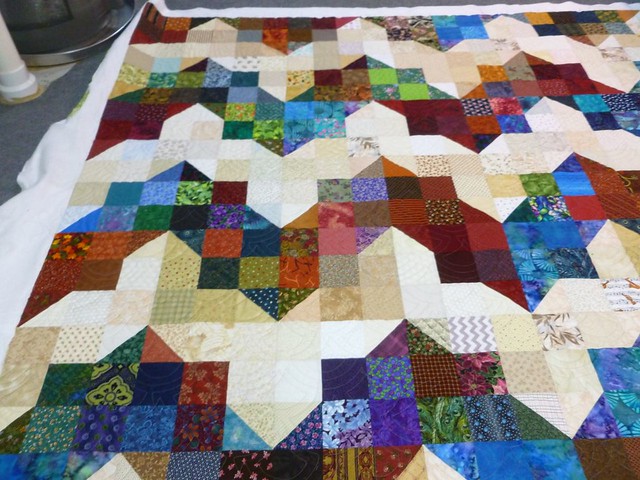 In the meantime, there are two more quilt flimsys to quilt, binding to make and so many blocks that I’d like to assemble them into flimsys to ship, rather than just shipping blocks. I’ll be able to include the lovely blocks from Jo B, who shipped hers all the way from Australia, thanks Jo!  I hope I can get a bit of help with the second crew of friends soon.  I think sending two shipments is going to be best, and I’ll try to get at least one out by the end of next week.  If it snows again, like the weather guy says it might, I’ll have quite a bit of time to work on that.  But I have several other projects to do as well, so I just need to get busy!  February is coming too soon!!

Thank you to everyone that participated in this project.  We did good, didn’t we?  Did you see one of your blocks?

Update – Several readers keep asking where this pattern is.  I have posted a link on every post on this project except this post, LOL, so wouldn’t you know it is the one new readers see!! – The pattern is free on the Ventura Modern Quilt Guild site. http://www.venturamodernquiltguild.com/2017/12/11/thomas-fire-blocks/

Fat Quarter Shop’s Precuts of the Week on Sale!.
Thank you for using my affiliate links, the small commissions I may receive support the costs of my blog and projects at no extra cost to you, and you can use your existing accounts with the merchants. 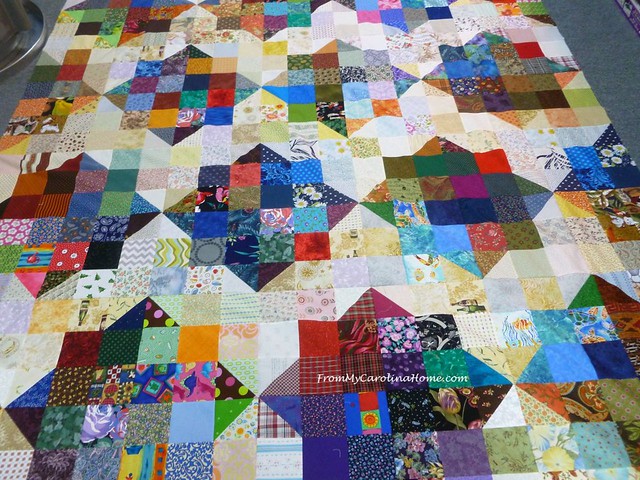