The blocks on this pretty quilt were completed by a friend who recently passed away after a long battle with ovarian cancer.  Nancy was one of the bravest women I have ever known. I am not sure many could endure what she did, the way she did, with grace and a determination to live her life as normally as possible in spite of the treatments and ugliness of the disease and its ravages.  She was a true inspiration.  When my friend Marti told me that the blocks were assembled into a top, and asked me to quilt it, of course I said yes.  In fact, I told her that I would be mad if she didn’t let me quilt it.  Marti put sashing and cornerstones on the blocks to enlarge it, and it really took on a look of stained glass. 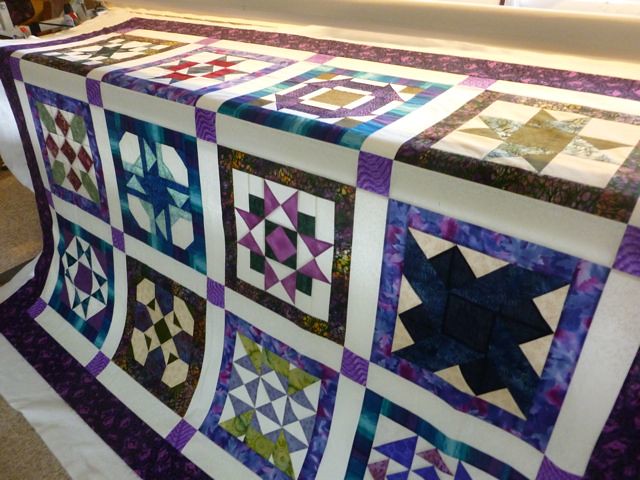 Of course, I know that Marti’s quilts are always flat and square with perfect sashing and borders. 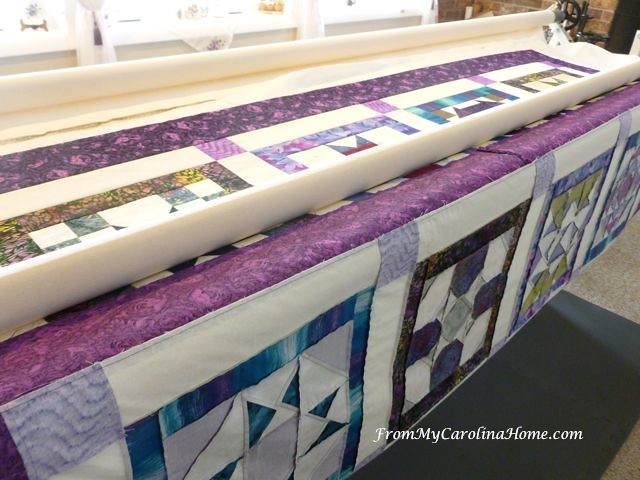 I  also knew right away that a dark purple would be my choice for thread color. Essentials for the top, Auriful for the bobbin. 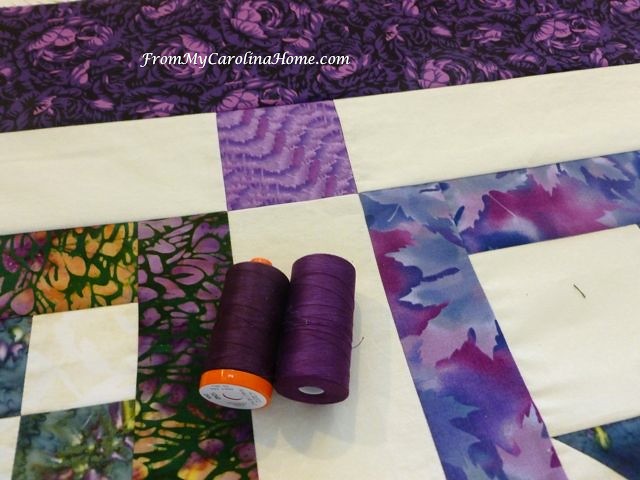 I picked an interlocking pantograph that had a trefoil design called Wrought Iron by Jodi Beamish for Willow Leaf Designs.  It has two rows on one panto, so I can stitch across twice before advancing the quilt. 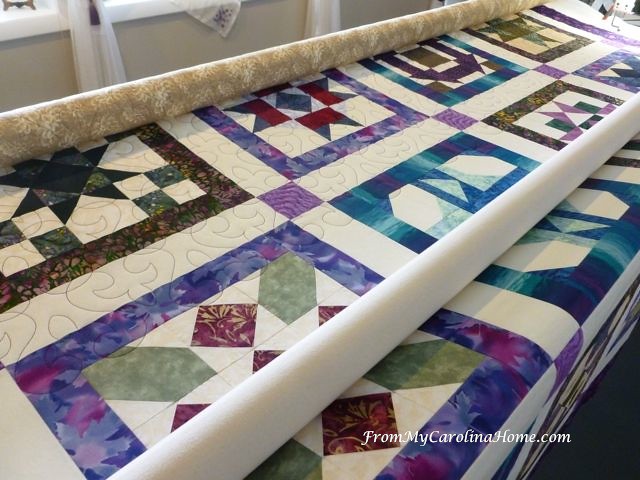 She must have liked it as I could almost feel her smiling as I worked with the longarm. 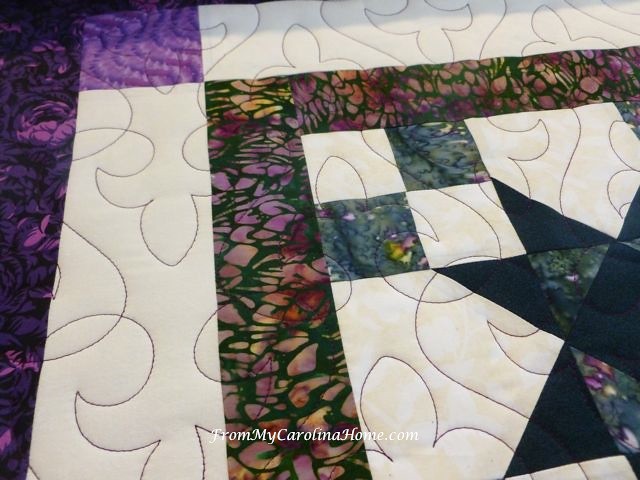 I like the way the thread color lets Nancy’s beautiful blocks shine. 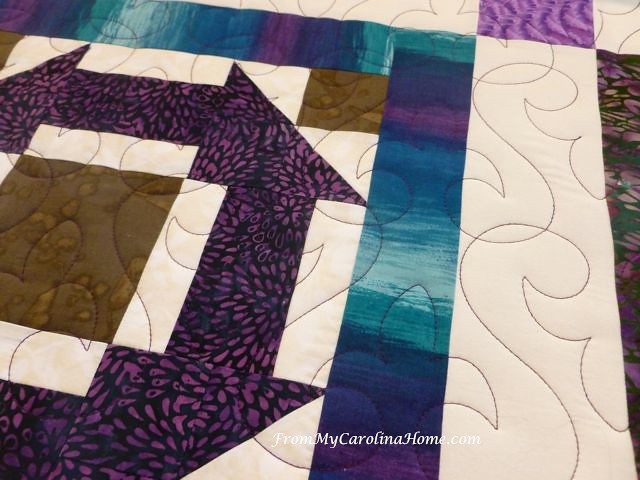 Of course, Murphy’s law struck, and I ran out of bobbin thread in the middle of a row. 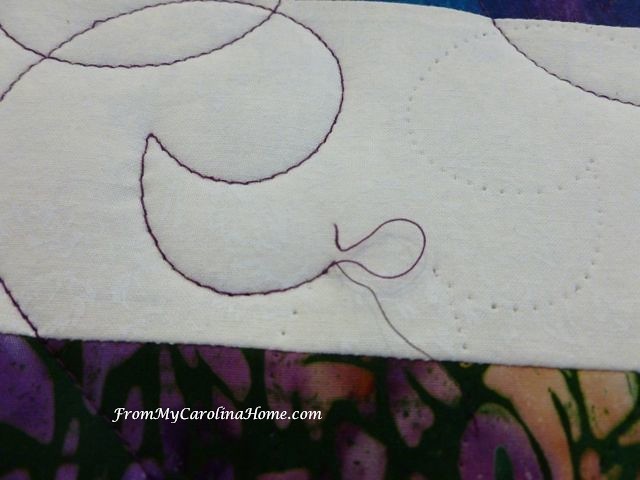 I thought this would be a good time to show you how I deal with this. I’m sure you’ve heard of ‘tie off and bury your threads’, and I have to admit I didn’t do this for the longest time. It was too much of a pain. But, I found some needles that thread from the top with just some pressure with the thread tails, and now it is easy. I started here by using my thread snips to gently pull the bobbin thread up to the top. I pull on the top thread, and use the point of the snips to pull the loop of bobbin up again, taking out the stitch. 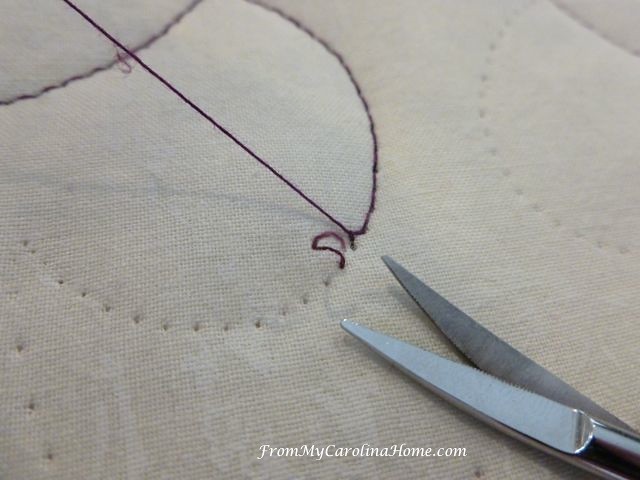 I work this around until I get into a patterned area where the thread change will be hidden a bit better. If I tie off in the white, this dark thread will show underneath. 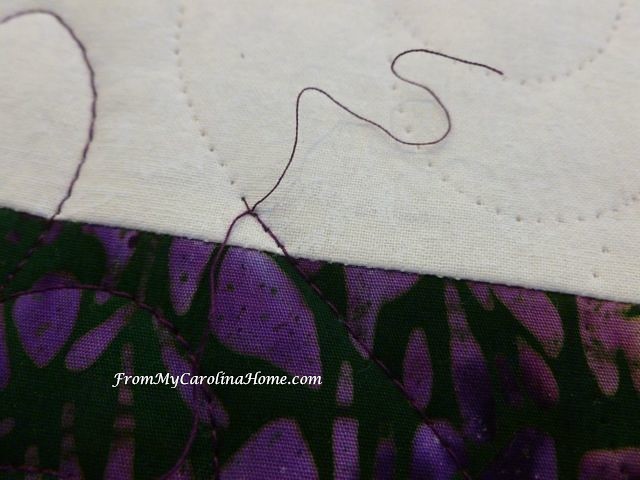 Keep going until the thread end is well into the purple fabric. Tie the ends of the top and bobbin thread into a tiny knot. Place the needle at the point of the knot, and push the thread tails on the top of the needle, into the little indentation to thread it. 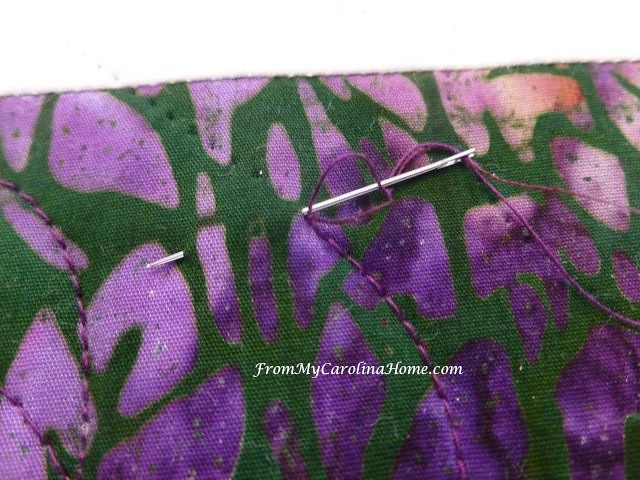 Then pull it through, and cut the tails off at the exit point of the needle, well away from the actual knot.  Putting a little pressure up on the tails, they will then retract behind the fabric when cut.  I couldn’t do that and hold the camera and the snips all at once, so the tails look loose here.  But I actually pull on them as I cut. 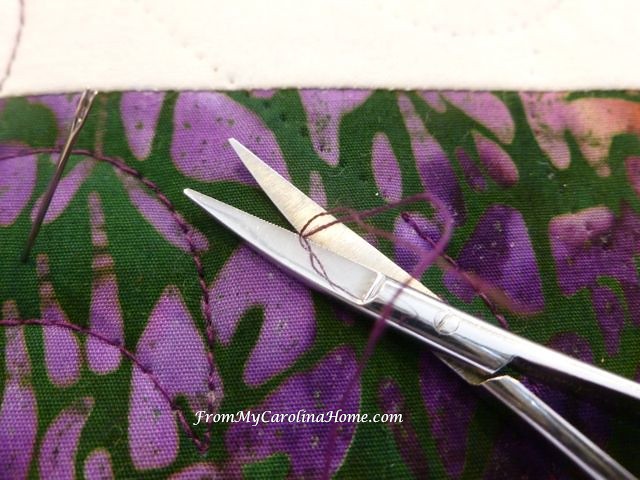 Now, with my replaced bobbin, I take two tiny back stitches at the point I left off. 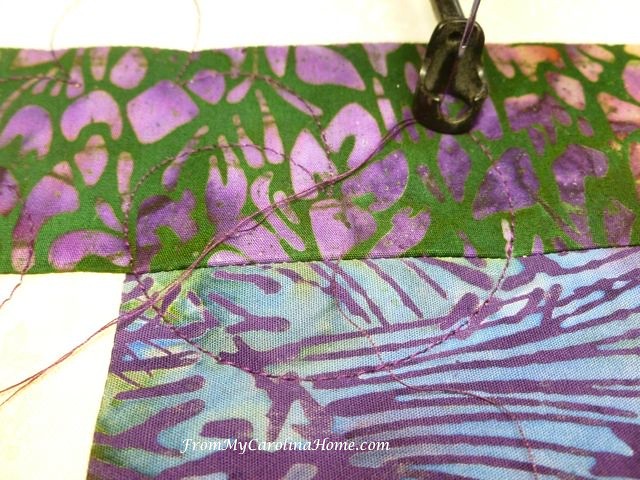 When I finish the row, I come back to bury the thread tails of the restarted stitching. 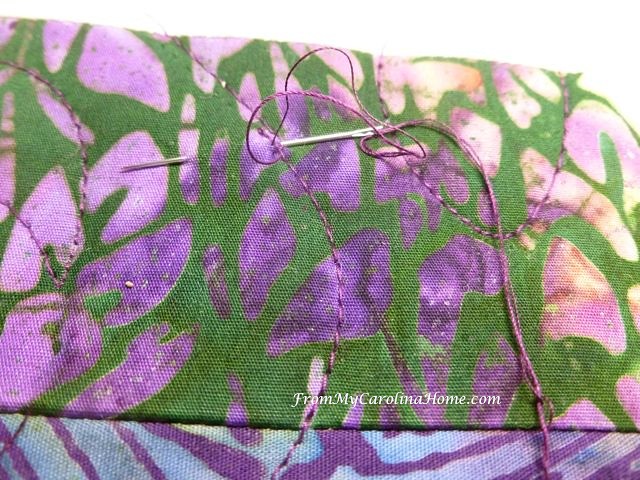 Clipping those tails, you really have to look to find the point where the stop and start occurred. 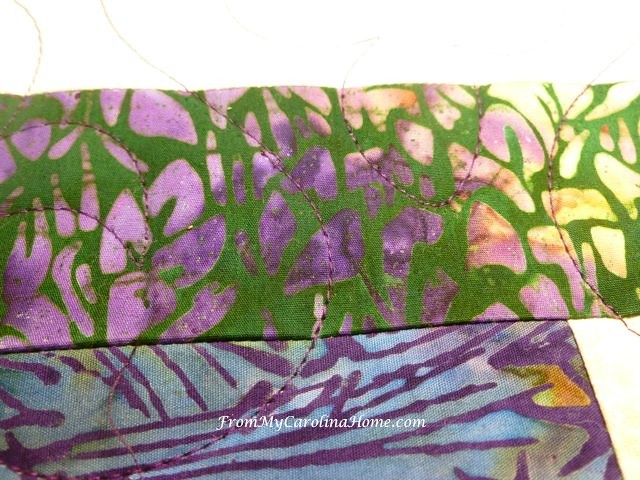 In the white section (which looks yellow here due to the light from the longarm), you can see the needle holes from the original line of stitching removed. 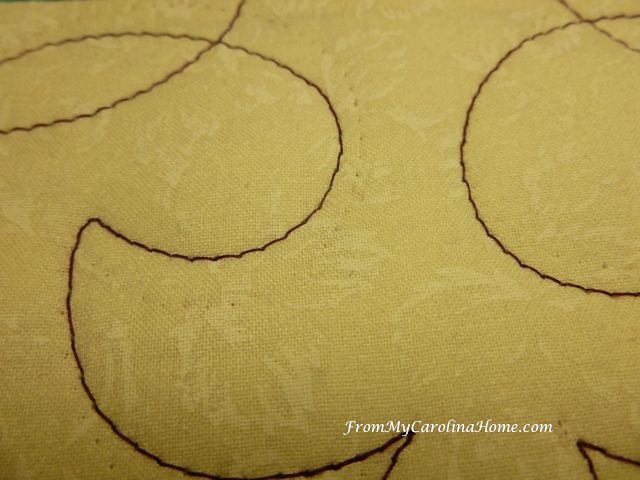 I just use my fingernail or a toothbrush to close those up. 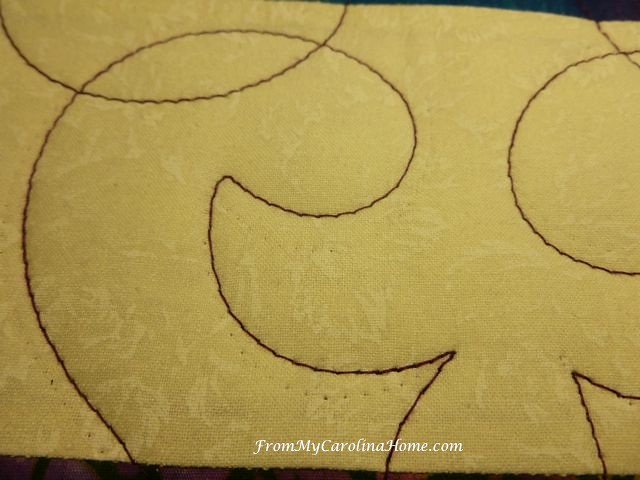 I put a large corsage pin in the front so I can find that point on the back. I want to be sure that the stitching is good there too. 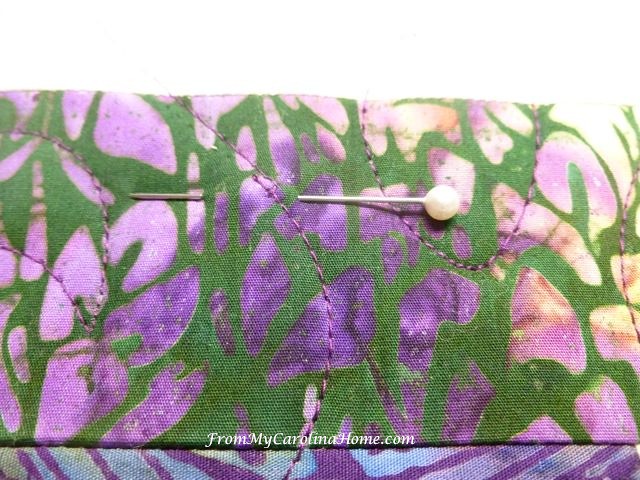 It is really difficult to see on this patterned backing, so I put some paper on either side, the pin is at the bottom. The stitching line is nicely continuous without any noticeable knots, overstitches, or thread build up. If the backing was plain, this would be really important especially if your quilt is submitted to a show for judging. 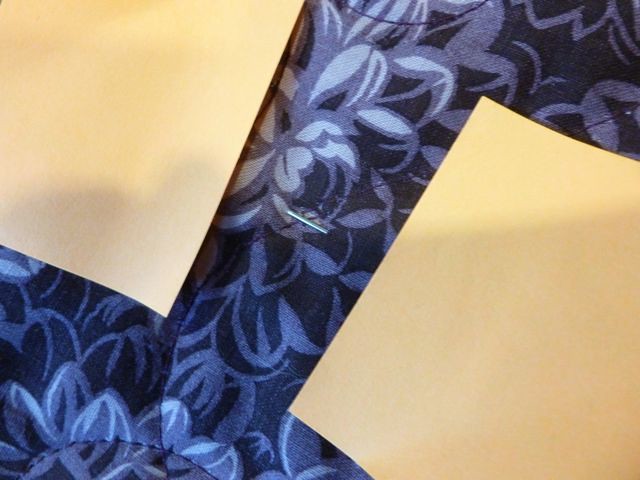 Luckily, that was the only bobbin glitch.  After that, there wasn’t a row that ran out of bobbin thread, or had a thread break. 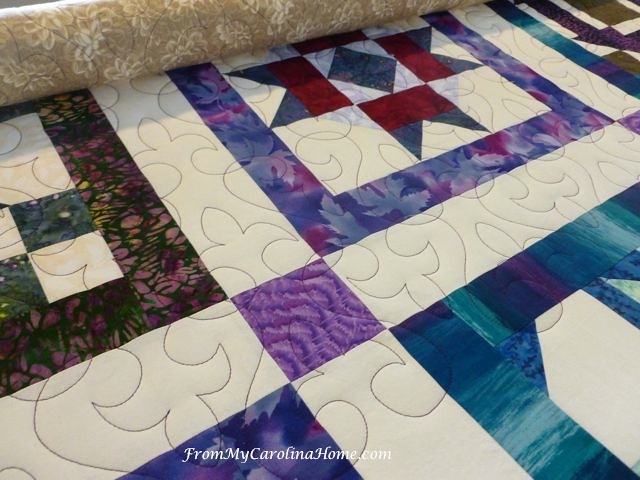 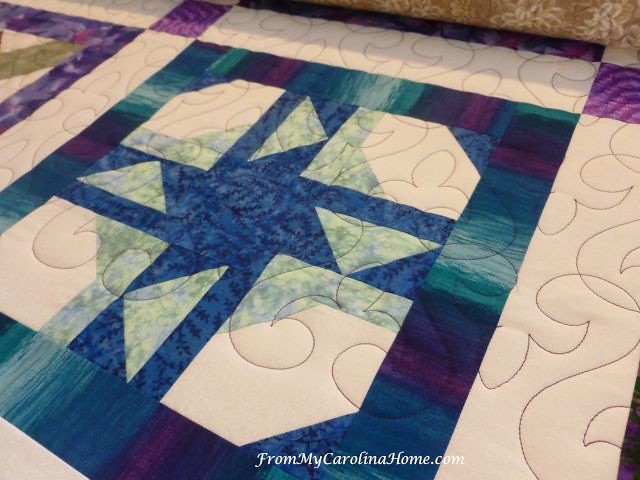 All done, I love these colors. 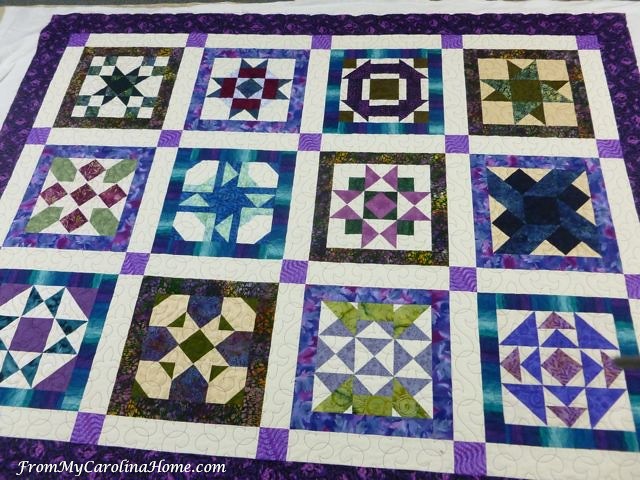 Marti plans to send this to a charity event in all our names. 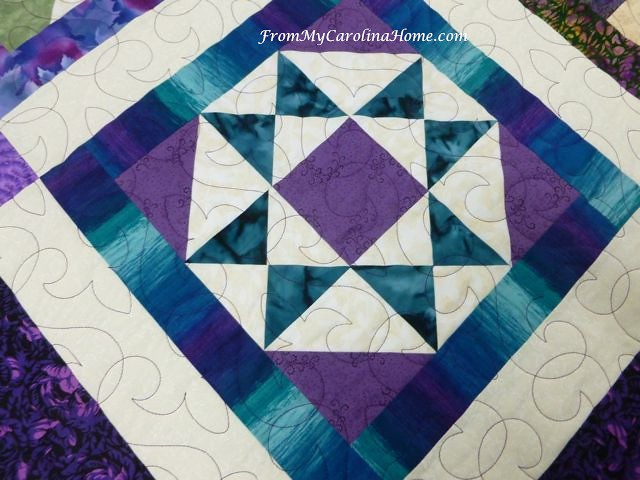 But to me it will be Nancy’s quilt. 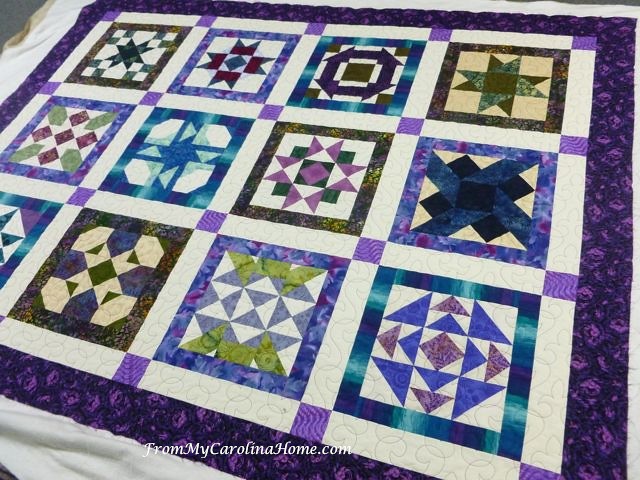 If you’d like to try those Easy Threading Needles, they are available with my affiliate link at Fat Quarter Shop HERE.

You can find the needles in a large pack to share with friends at Amazon Self Threading Needle Pack.

Are you sewing or quilting or crafting this lovely Thanksgiving weekend?