Moving on to the next Quilt of Valor, each one has been unique and interesting.  This one had foundation pieced stripes on a muslin base, alternating those squares with an eagle print.  I was concerned that the difference in weight between the squares might make quilting a challenge.  I laid it on the longarm bar to check the size of the backing and batting.  The batting is Warm and Natural all cotton.  It was nice that this piecer did a good job on her borders. 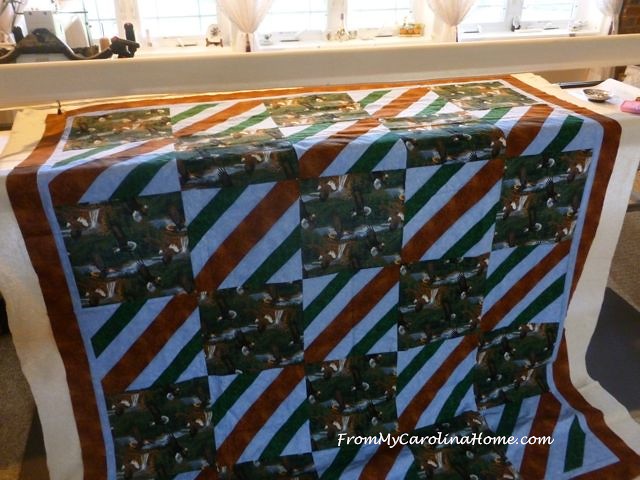 The stripes had to be precise so that they would seem to move behind the eagle print squares. Foundation piecing made sense for this. But the difference in weight between the muslin backed squares and the others was noticeable. 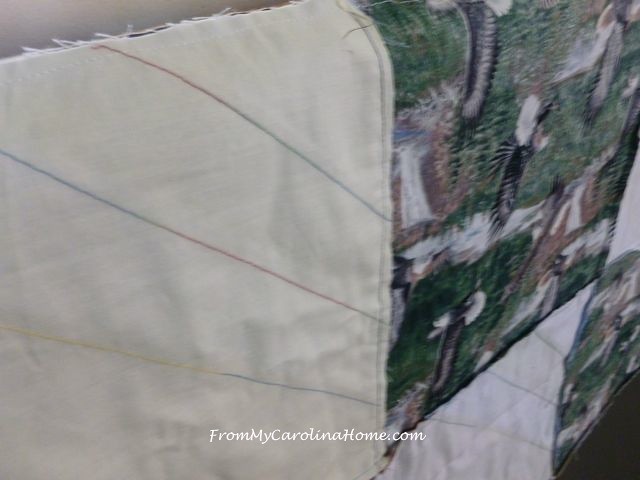 I loaded it on the longarm, and chose a lighter color thread than I usually choose to use.   I picked a lighter ecru color Essentials thread, with the same thread in the bobbin. 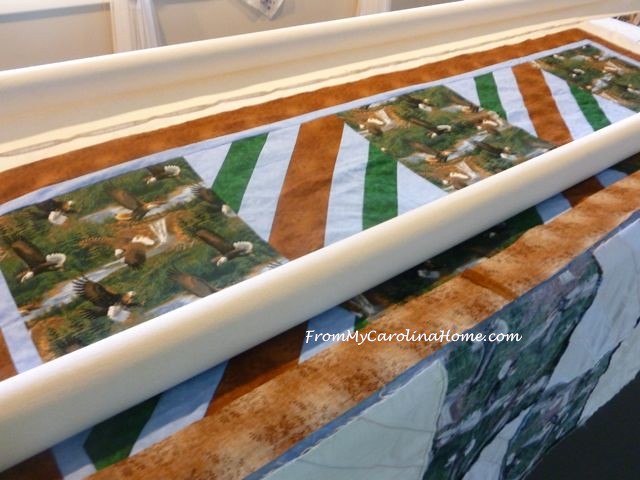 The backing fabric was a light beige, and anything dark would show every little wobble or glitch. I don’t plan to do that but it usually happens anyway. The first pass across the quilt did nicely, thank heaven no tension issues with this one. 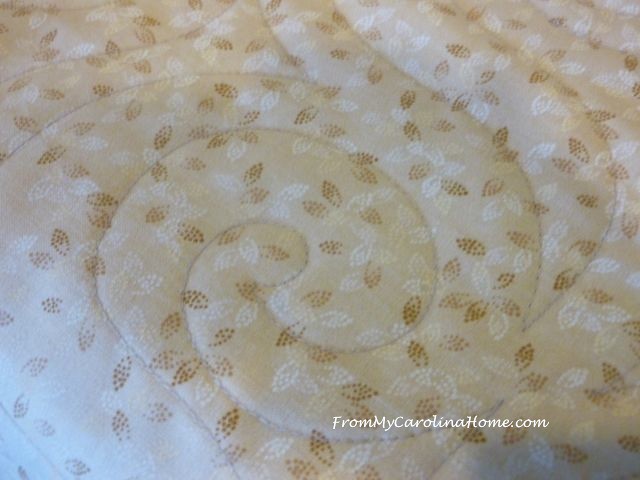 That was a relief, as it was very apparent to me with the additional drag on the machine when I was stitching in the striped blocks. Quilting on the eagle print squares had less drag, so I tended to speed up just a tiny bit. I think the stitching does the best when I can maintain a consistent speed in movement of the machine. 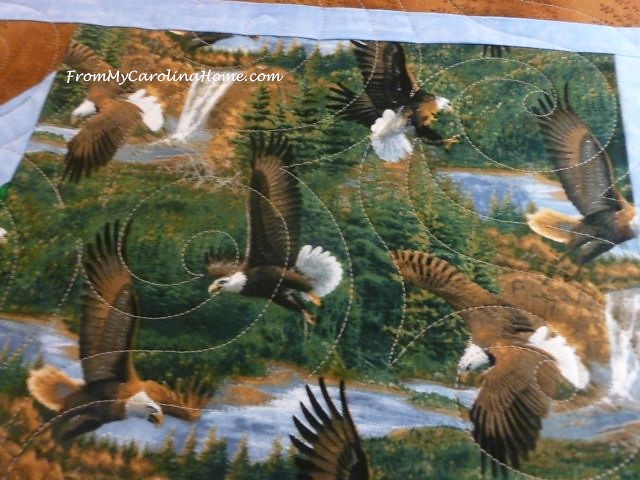 Still, it really didn’t seem to matter, the stitching was good over the stripes too.  The pantograph is called Fascination by Lorien Quilting for Willow Leaf Studios, designed by Hermione Agee. 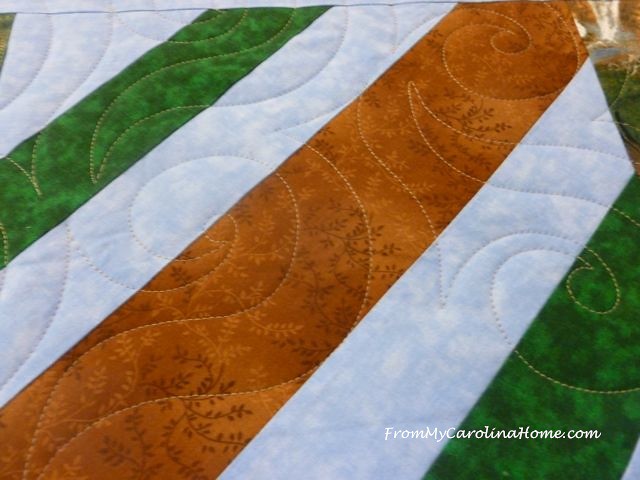 Looking at the two different blocks after quilting, side by side,  the size is pretty consistent.  The stitches get a bit longer when I am changing directions, so I adjusted the cruise to a higher speed to compensate. 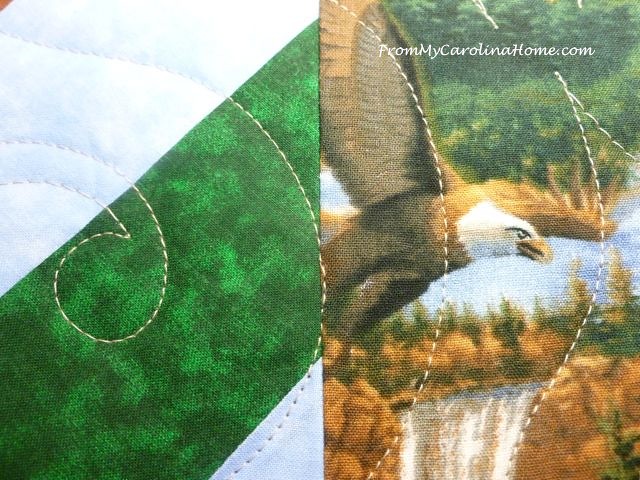 Going over the borders, the thread color blended well. 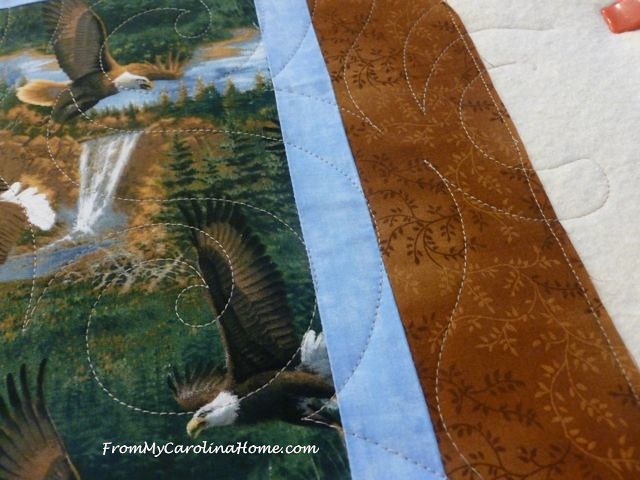 The seams where the corners joined had some excess bulk due to the extra muslin layer. It would have been better to clip out some of this excess muslin before sending it for quilting. But, I just tried to do my best.  Here you can see the rounded seam and a bit of gathering in the blue on the left. 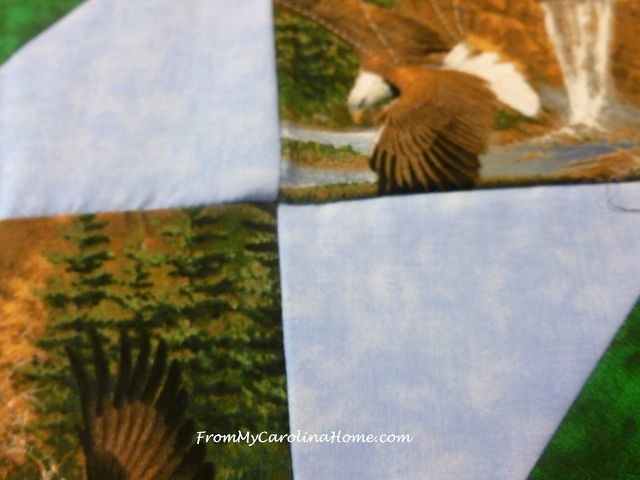 Most of the time I was lucky and the stitching line on the pantograph went around the point where there was extra bulk. 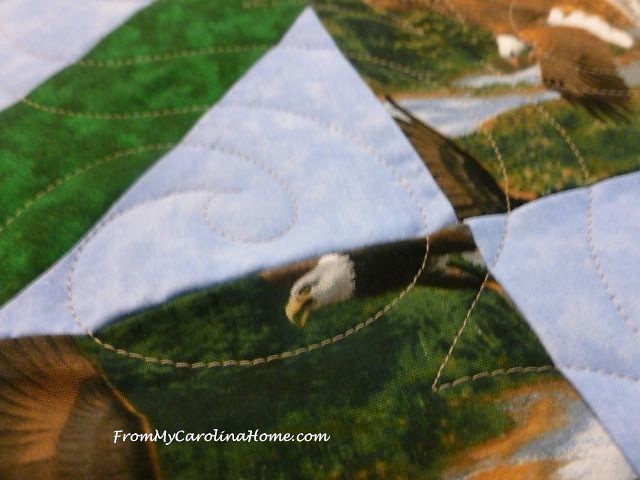 But you can see how the extra fabric in the seam allowance makes that point pop up a bit where four blocks come together. 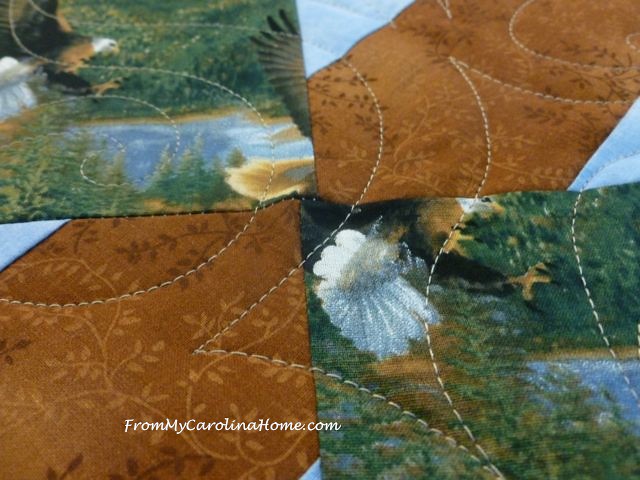 It quilted quickly, and I trimmed it before folding it up to add to the shipment back to the guild. 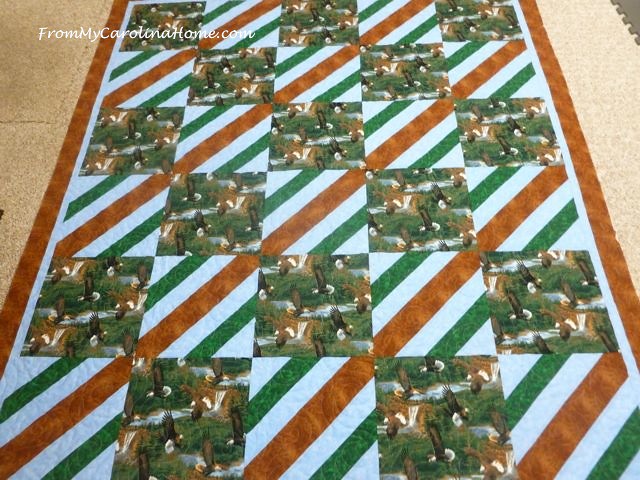 As usual, I learn something with every quilt. This one taught me that differences in block weight didn’t make a difference in the stitches, but I should trim excess foundation from the joining seams where possible. I have a couple of friends with longarm machines helping me with these, but I still have several more to show you. I’ll get to most of them between the end of August and through September. I am working on doing another Autumn Jubilee in October, and I already have some fantastic plans in the works. More on that later!

What are you working on? Have you ever done a quilt with foundation piecing?

My blog is about a variety of topics, quilting and sewing, crafting and cooking, reading and travel, mountain living and gardening, and more.  I have lots of free patterns for quilters, mystery quilt alongs, holiday quilt alongs, and seasonal events with giveaways.  Please follow me for all the fun!  New projects coming up!!  I do new tutorials and patterns quite often, along with a variety of other subjects on my blog. I would like to invite you to follow if you want, by using the sidebar buttons for your favorite blog reader, or enter your email to follow via email. I post usually about 4 times a week, not excessively. My annual Autumn Jubilee is coming up in October, and I’ll have a lot of new things to show, projects to do, a quilt along and giveaways.

Finished or Not Friday