When I left this at the beginning of the week, I had realized too late that I made two yellow houses to go next to each other.  One of those ‘oh, no!’ moments.  What is the good of having a plan if I don’t stick to it?   Well, perhaps it is to let you all know that mistakes happen, and there isn’t anything that cannot be fixed in some way.  I make plenty of mistakes normally, but this quilt has certainly tried my patience.  So now, time to punt yet again. 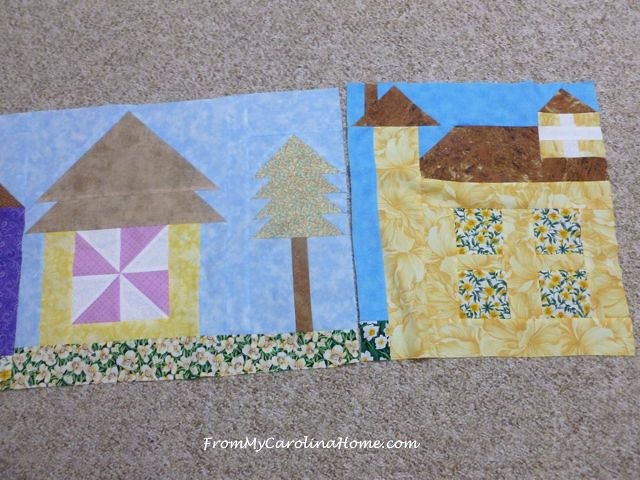 The first thought I had was to just move this block to the opposite end. But, I have made one block in each row with the darker color blue, and this would put two right next to each other in the first position on two adjacent rows. So I thought, I’ll swap the two, but as you can see, they are not the same width. 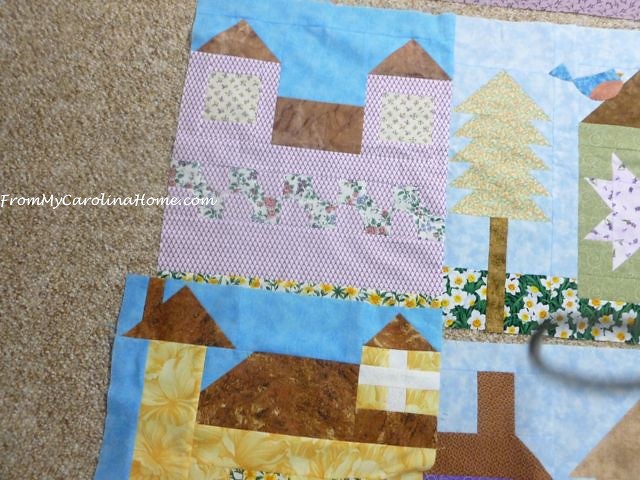 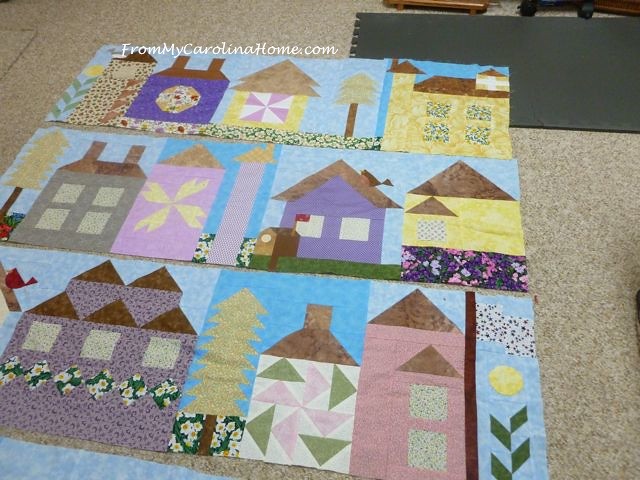 So, maybe I move the last house to position one, but again, I end up with the two dark backgrounds in the same position on two rows, plus it doesn’t separate the yellow very well. 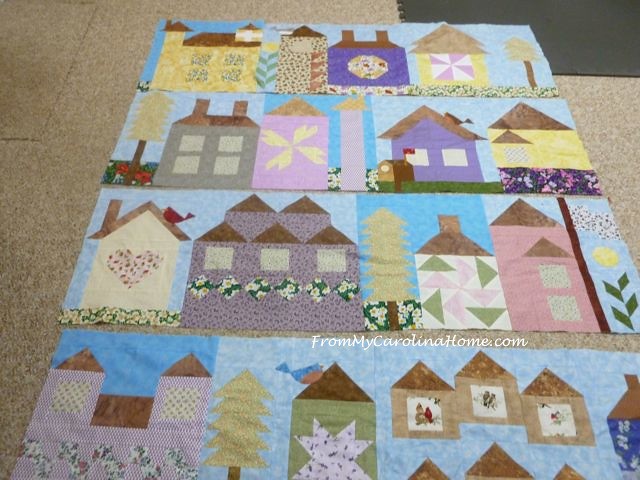 OK, so this row goes back to the bottom. The only thing that makes sense now is to rip the first block from row 3 and put it on the right end, so the dark blues are again distributed evenly. 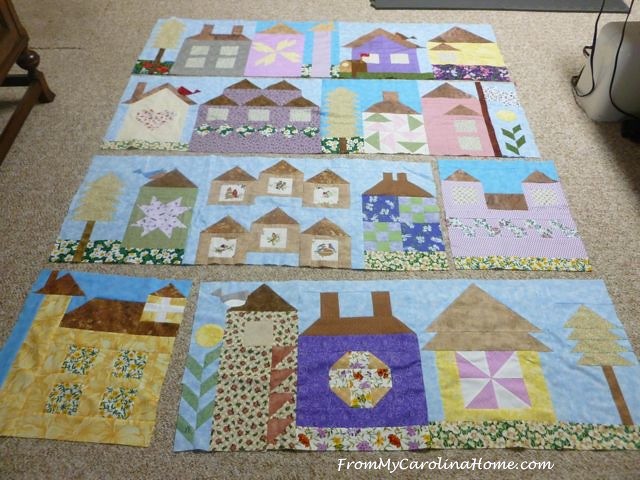 That is looking better, but now I have birds on two blocks in the first position on adjacent rows, when they were spread out better before. 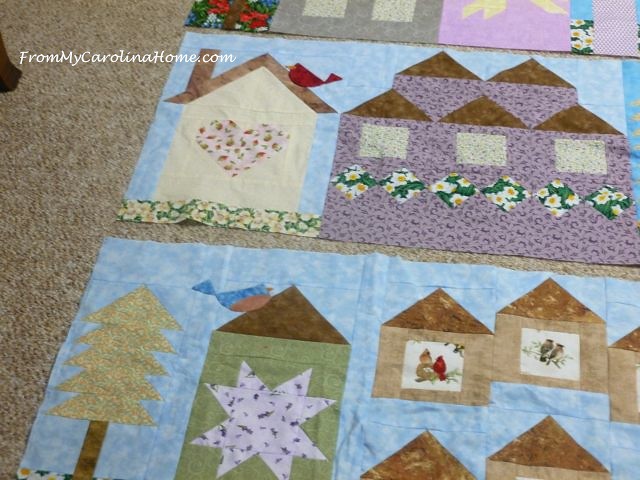 But I am not ripping up an applique, LOL, I draw the line there! So, the only thing to do at this point is to swap row one and row two.  OK, maybe I have a good layout now with the colors and the birds well distributed from a design standpoint.  I’m good with it, so this is ready to finish up. 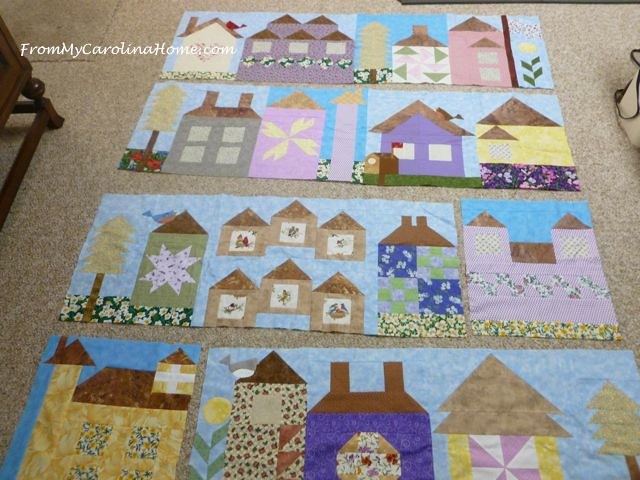 I sewed the end blocks to the rows on the third and fourth rows. Then, I begin cutting the sashing strips. I use one strip of sky and one of pebble fabric for road between the rows and across the bottom. 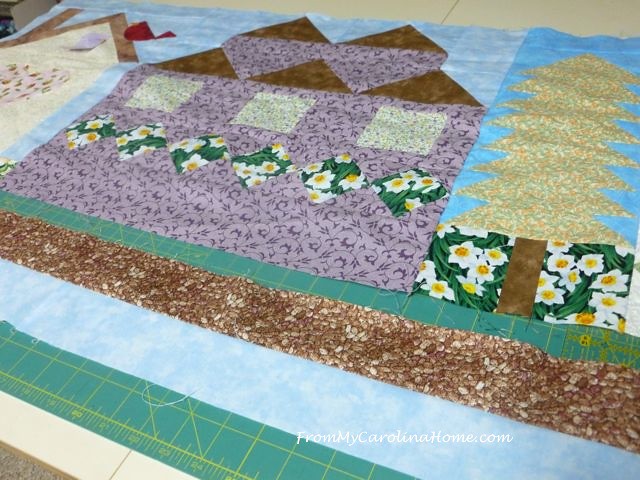 Cutting the strips to measure 60-inches, and pinning takes the longer set up of cutting board and pin board. 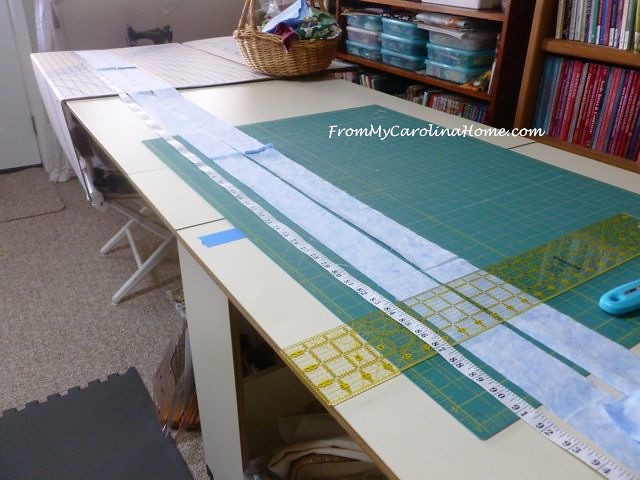 But, in short order the upper two rows are together. 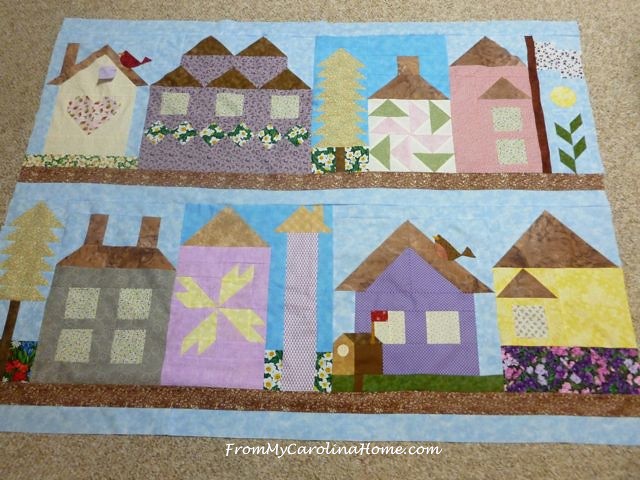 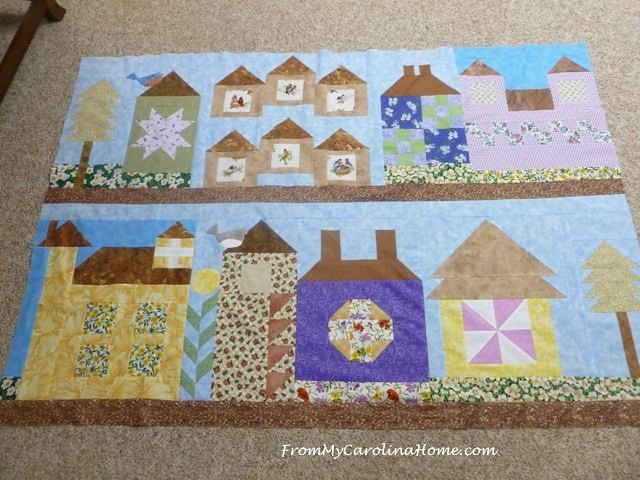 Now as I am looking at the two sections together, I see a big open space on the bottom right. 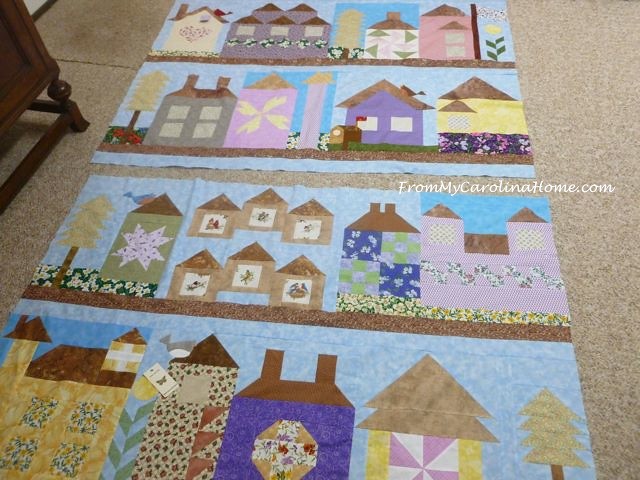 If I put a bird on that house, it would balance the distribution of the birds. So, more applique! Now is the time to do that, before the upper and lower sections are joined. Out comes the freezer paper, sections are cut and ironed. 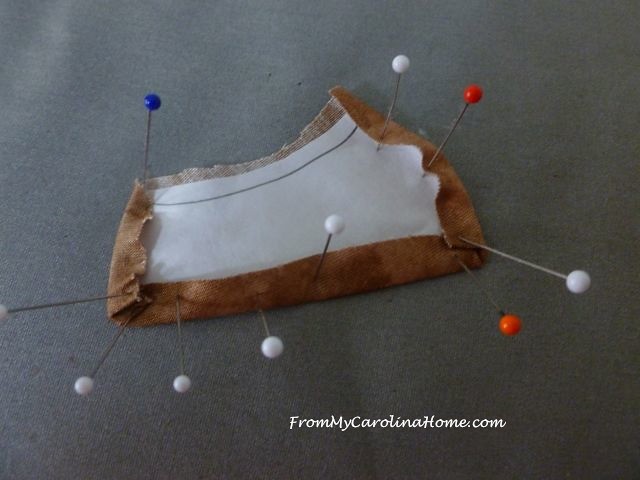 I still should to buy some applique pins, but I am resisting that urge as I don’t really want to do a lot more applique.  I see this little guy as a Carolina Wren.  It took less than an hour to stitch him down. 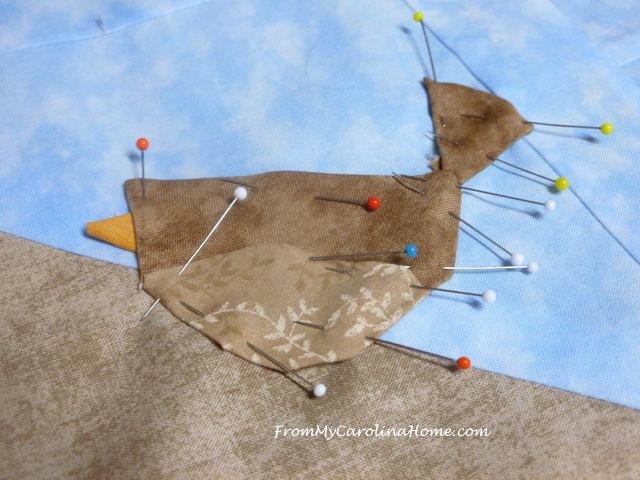 Joining the top and bottom sections and finally, the blocks are together with the sashing! 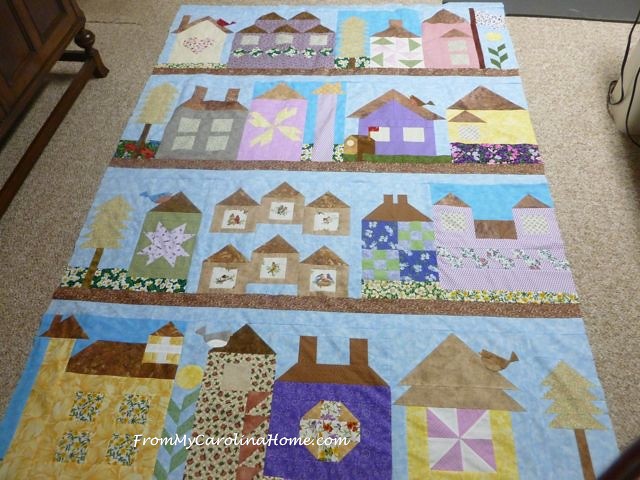 I start auditioning border fabrics now too. The light green with the butterflies looked the best.  I also decided to add side and bottom borders of sky blue to frame out the neighborhood. 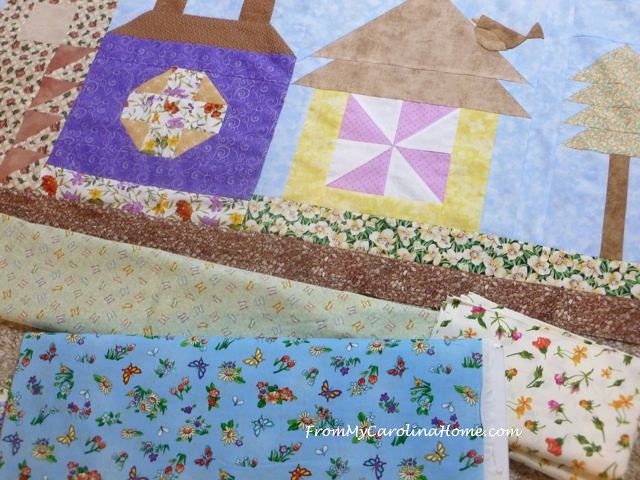 Two borders done, a narrow light blue sky fabric and then the light green with butterflies. 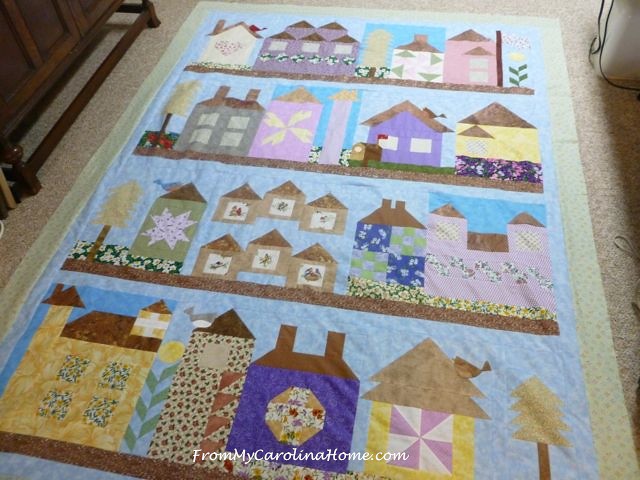 Here’s the bottom corner, with the same strips as between the rows. 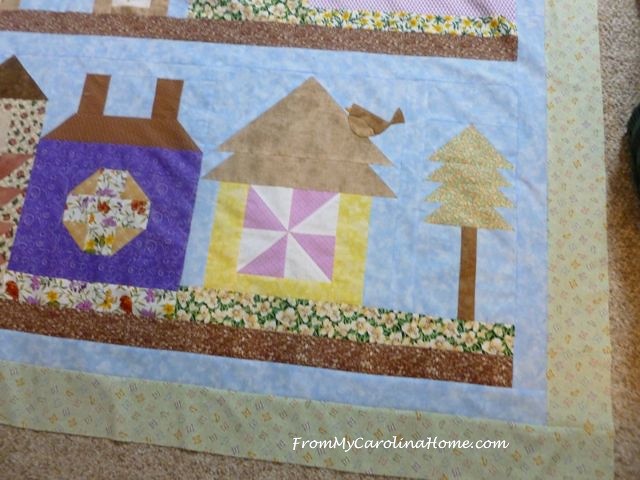 One sky strip on the top with no pebble fabric. The sides have just the sky fabric.  The green is 3-1/2 inches wide. 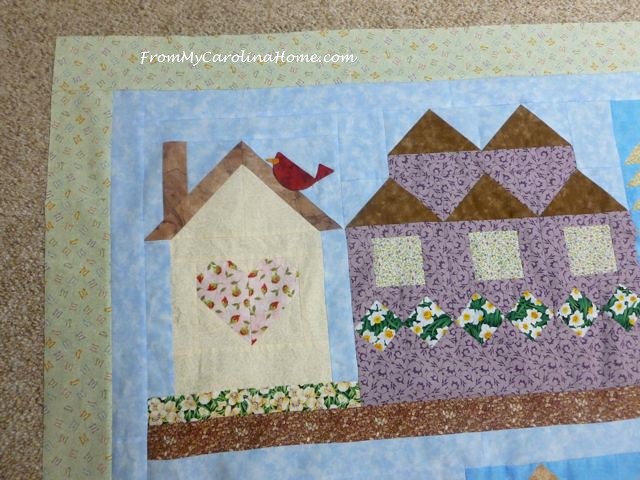 And, there it is, finally all assembled!!

On to quilting it, LOL!!  Then I’ll need to do binding and all the extra details, then a label and hanging sleeve.  I think I can make it by the deadline now.

What are you sewing now?

Finished or Not Friday

Can I Get a Whoop Whoop!

25 thoughts on “Be My Neighbor – Flimsy Assembly”