Quilting the high contrast version of my Moda Bake Shop design Garden Windows took forever.  Or at least it seemed like it. I started by adding the borders, and then loading on the longarm. I stabilized it first by quilting in the ditch around the borders.  I did a full custom job on it, each window got an individual feather wreath.  I did all of these freehand, only marking a circle, and boy is there a lot of variation in those feathers!  I do have a lot of potato chip shapes, and some hot dog shapes, but overall it works.  Just don’t get to close, LOL!! 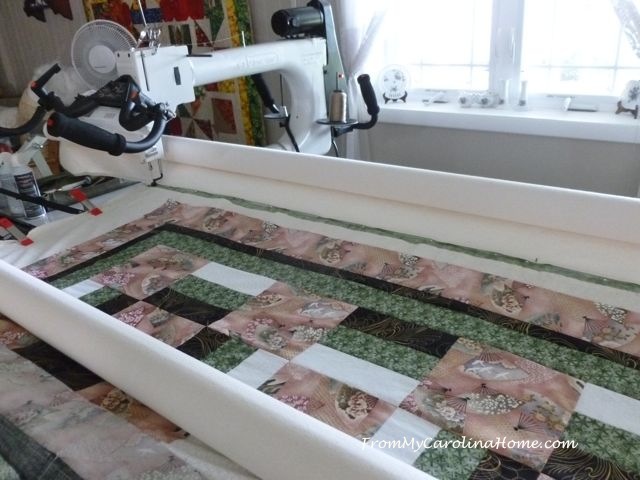 I started with the strip blocks, putting a row of ribbon candy in each strip, working down, then up then down again. I did one row at a time, alternating with the garden print squares. 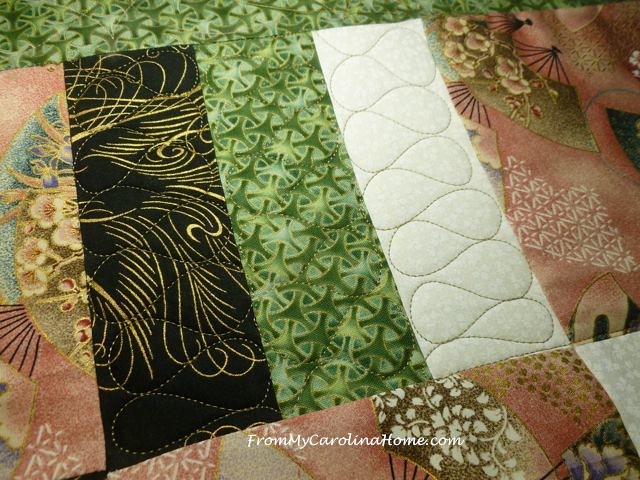 Using a circle template, I marked a circle in each of the garden print squares.  This is actually a longarm circle ruler, but I have never used it for that.  I have a set of them in multiple sizes, and I don’t actually know how to use them with the longarm.  I think I need to do some research on that, well, maybe someday when I really want to know, LOL!  In the meantime, they are perfect for marking with a water soluble pen. 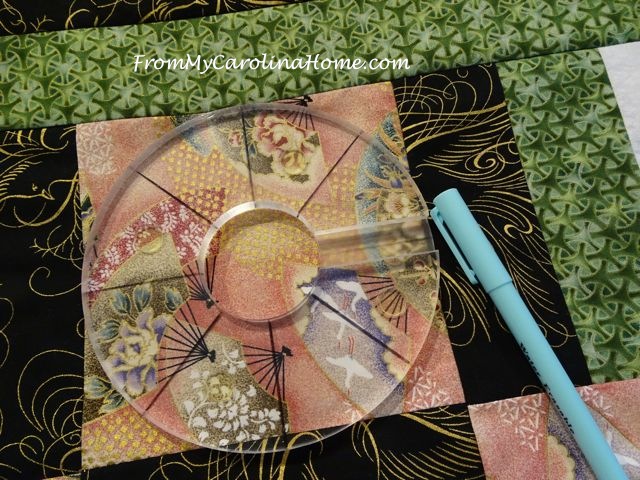 OK, so I marked the circles on each square in the row.  I did each row as I advanced the quilt so I didn’t have to roll back and forth too much. 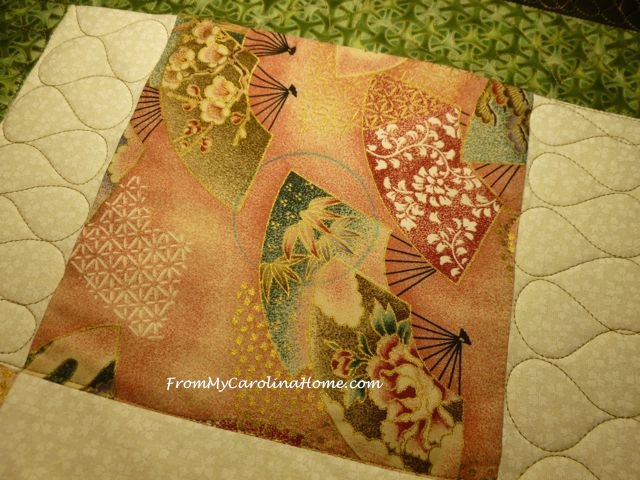 Then, I took a deep breath, and freehand quilted a feather wreath in each one. This one was one of the better efforts. Lots of them have wonky feathers, and potato chip feathers, some didn’t come out even at the start/stop point.  Plus, I need to get better at the backtracking over a stitch line. Ah, practice and more practice. This one was near the end, of course. 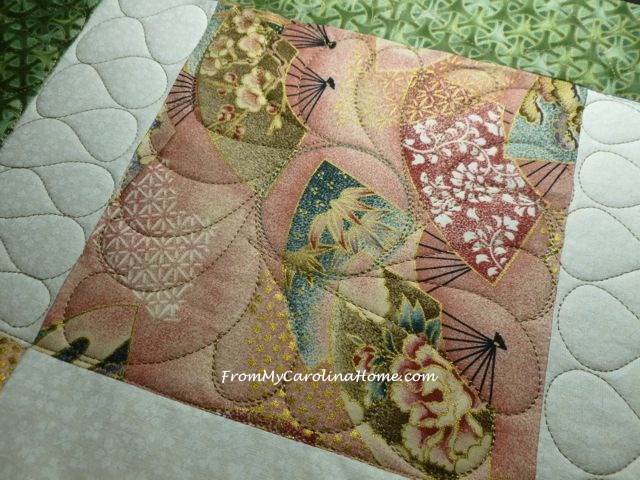 As each feather wreath was done, I erased the water soluable marking pen with Sew Clean. 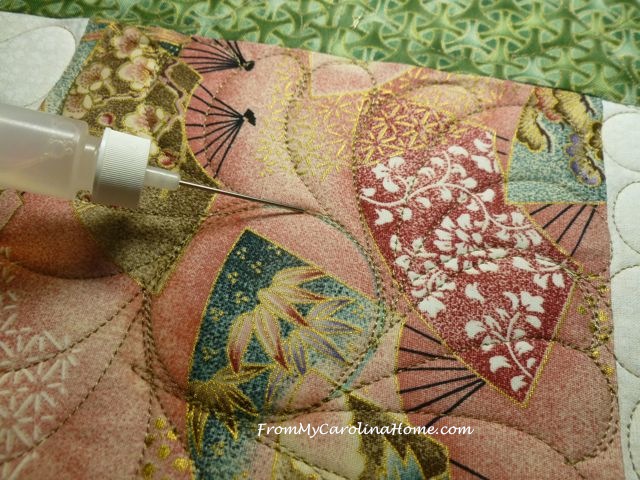 Moving on to the borders, the outer one was done in my favorite beadboard. This is ruler work of the easy kind. 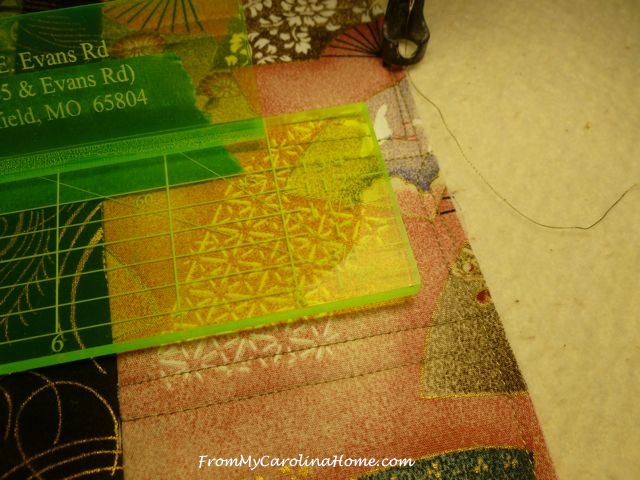 I started marking the green border with an egg and dart design stencil. This was not as easy as they make it look at the shows!  I got it too thick on the top border and the chalk bounced in little pills as I tried to figure out where to sew – on the outside of the line or in the middle?  The middle won, but the marking was so uneven that the egg and dart came out uneven too.  Plus the green fabric hid the thread!  Ah, but it also hid the wonkiness. 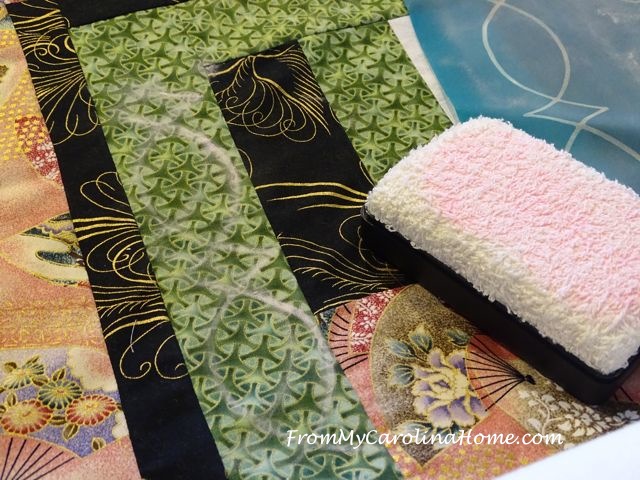 One thing I figured out is at the show, the demonstrator is using a board under the stencil and has a hard surface to push the chalk against. Trying to mark while the quilt is on the longarm is not as easy.  The surface gives with the pressure and the chalk just doesn’t come out as easily. 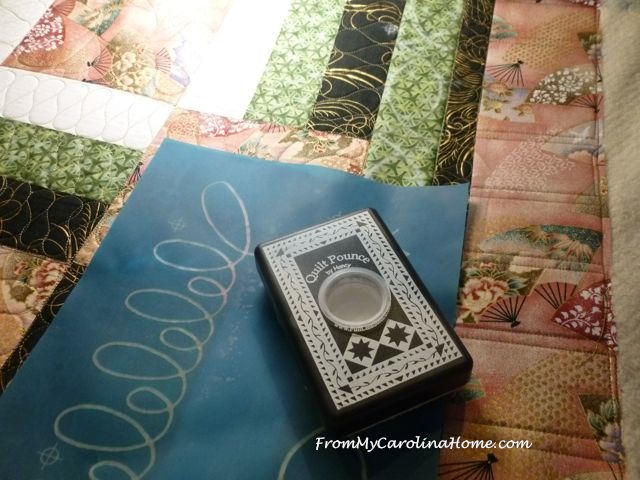 I did one green border at the top, and added ribbon candy in the black border. 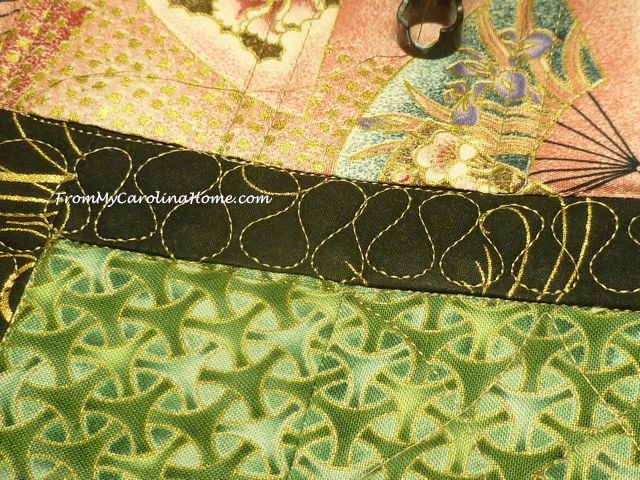 My marking on the side didn’t show enough to quilt by, so I had to mark again.  Lining the stencil back up precisely where I had it before was a challenge too. 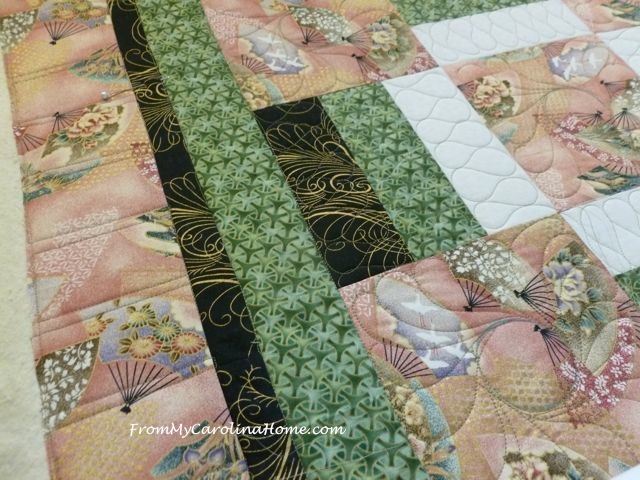 Eventually, I was able to get an amount of chalk on the quilt dark enough to see, yet not so much that the chalk was bouncing on the fabric as I sewed. 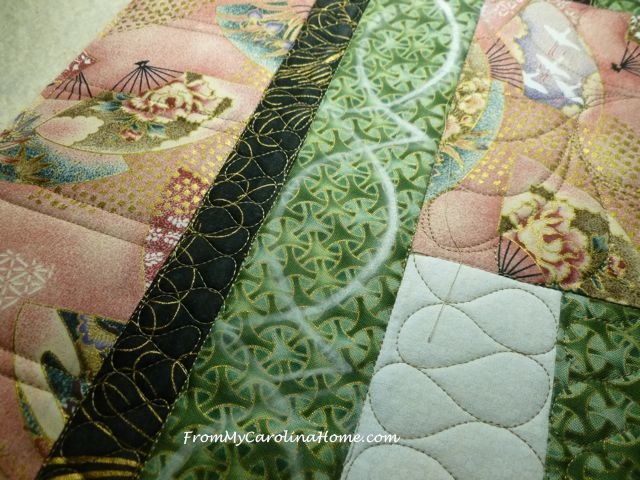 Then, I realized that the traveling I did in the ditches was not enough to get all the sides of the squares, and I decided that I needed to stitch in the ditch around all of them. So, out came my really long ruler, and I did that. I am not good at this, but again, practice is needed and I have to start somewhere. 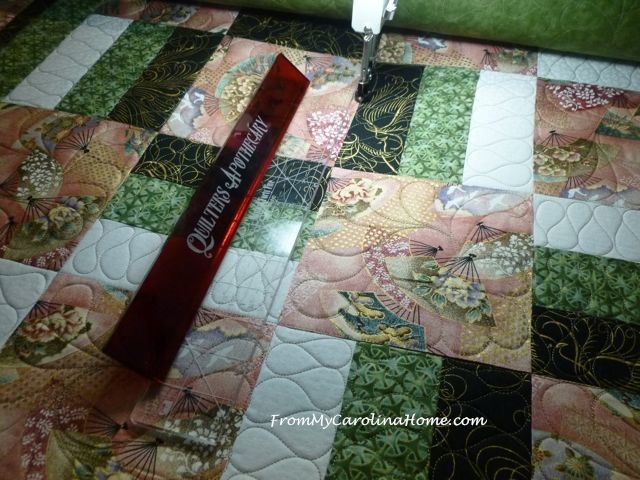 Trying to get close up pictures of the quilting was difficult. The thread I used was a tan polyester that added a little shine, but because the fabrics all have gold threads, it is difficult to see.  The bobbin thread was Bottom Line.   The batting is my favorite Warm and Natural all cotton. 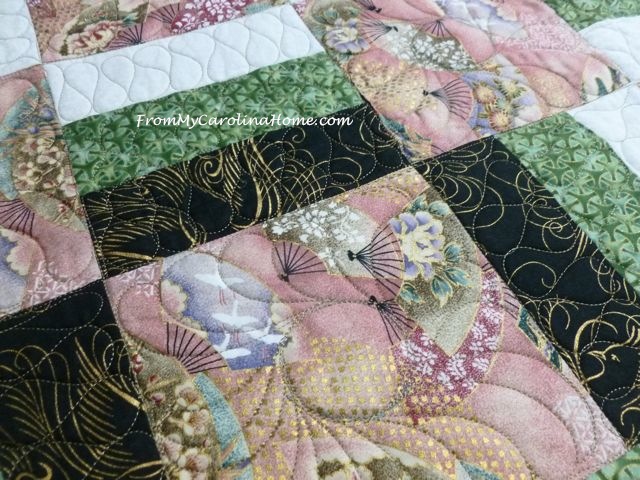 Got mustard? There’s a big hot dog in this feather wreath. 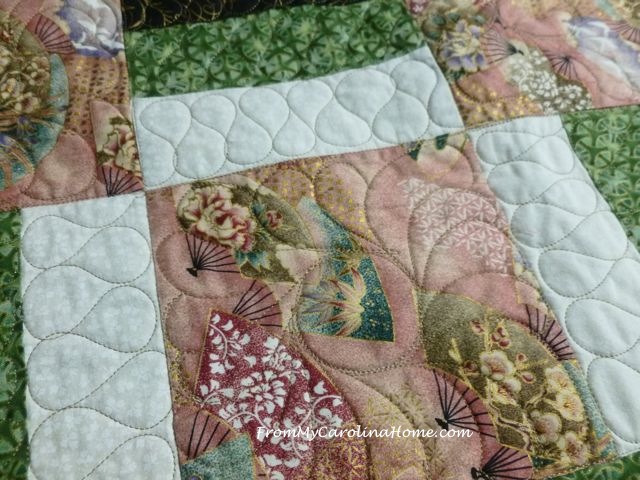 You can barely make out the egg and dart in the green border on this pic, after the chalk was removed. The great part about this chalk is it brushes off easily, and any that doesn’t come off disappears with ironing. 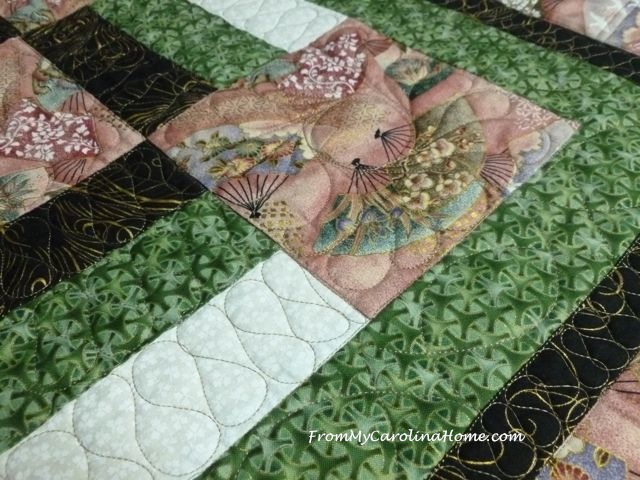 I bound it in the green print, over a couple of evenings while watching TV. Here it is all finished. 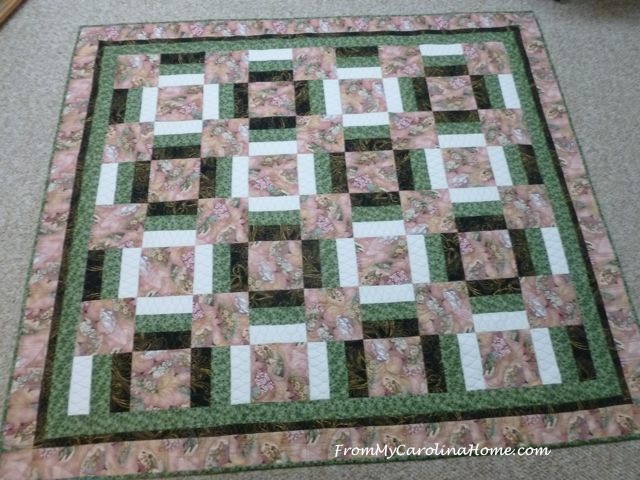 One more important note, after my pattern for Garden Windows was published on Moda Bake Shop, I read with dismay that the pattern was done before.  One of the comments said it was Warm Wishes, so I researched that name and found it.  It was originally published in 2000 by Quiltmaker magazine for  Project Linus.  I had no idea, as I didn’t begin quilting until 2003.  Moda didn’t catch it either.  I had never seen the Warm Wishes pattern on any website or in a magazine.  I didn’t know about this pattern at all.  I came up with the idea completely independently using the jelly roll strips.  Although I have now given proper credit on the Moda site in my response to the first comment that mentioned it, I still feel bad about it.   How can I know if a design I come up with in my head is truly original now? Garden Windows is different as it uses a jelly roll in a scrappy version with a different method of construction, where the original Warm Wishes uses width-of-fabric strips of all the same fabric, but still it bothers me.   I do not believe that there is any way I could have found out prior to the publication of Garden Windows.  Still, my apologies to everyone, and see the Quiltmaker website for a free download of the Project Linus Warm Wishes quilt.