In the last two months, I have caught up with several good books from three good authors, and one in the not so much category.  In each case, I picked up new titles, at least new to me, from authors I have enjoyed in the past.  I have already put abbreviated reviews on Goodreads for a few of these, but I’d like to share them with you. 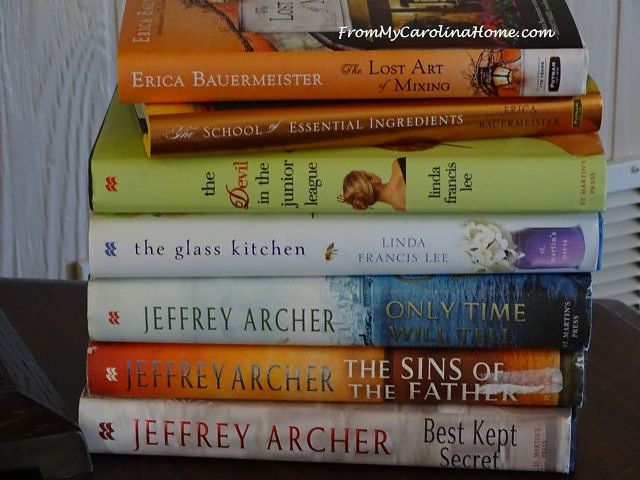 First, Linda Francis Lee wrote a book I found years ago, and it is one of the funniest books I have ever read.  It is called The Devil in the Junior League.  A woman in the upper crust of Junior League society is abandoned by her husband taking all the money with him.  The only way she can afford a lawyer is to hire the flashy, new money lawyer who moved into her neighborhood with the payment plan of getting his tacky, stiletto wearing, gum chewing, wife into the Junior League.  What follows is a Pygmalion story that is just hilarious. This is truly one of the funniest books I have ever read. It made me laugh out loud on an airplane, and also while I was reading and trying to be quiet in a hospital ICU! Something that can make you laugh when you are worried is a treasure indeed. The story piles more laughs on page after page, as the situation just becomes more convoluted, and thus more comical. It is a light read, a great beach read, or perfect for anytime you want to escape into a Southern farce. 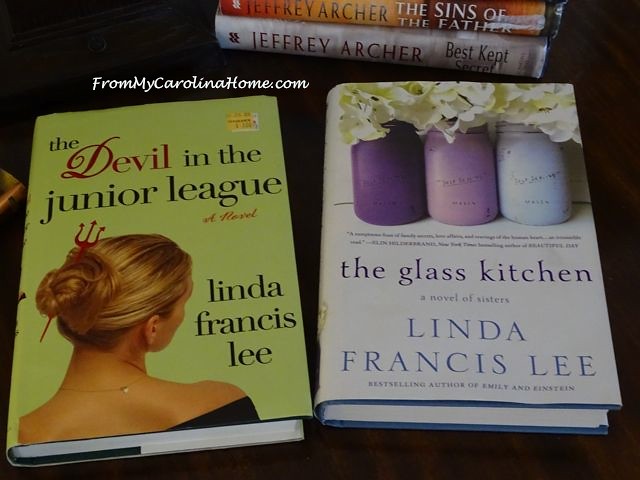 When I saw the new book by Linda Francis Lee called The Glass Kitchen, I had to grab it up at the library sale.  The book has a delightful premise, where a woman gets visions of foods that lead to information in her life, directions to go, how to find her sister, and more. Moving to New York after a disastrous divorce, she has to relearn how to let the visions in again, and in so doing, find her own way. I enjoyed the book, although I think it bogged down in the middle a bit with the predictable love affair, but managed to save itself in the conclusion. Like the other book by this author, the heroine is pushed around by the men in her life, and eventually comes into her own, finally accepting herself and standing up for what she wants. Another very enjoyable read, with a twist on the usual story. 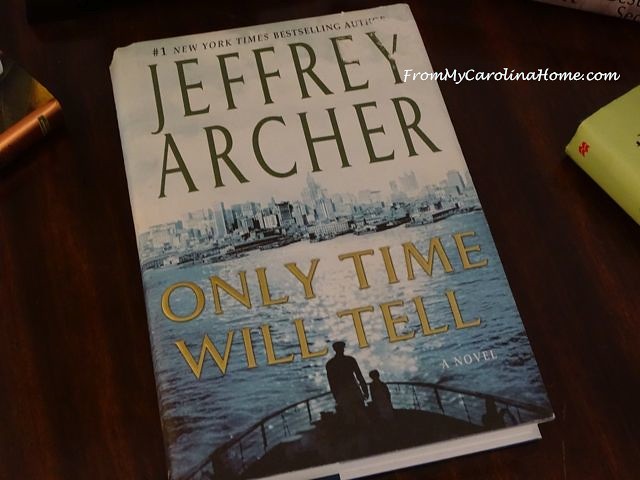 Another favorite author, Jeffrey Archer writes wonderful stories set in England.  His novels are about family and political power, legal themes and epic tales.  His series called the Clifton Chronicles is a well paced story in an easy reading style. In the first novel, Only Time Will Tell, Harry Clifton is introduced to the reader and grows up without knowing who he really is. His life in school, and the shaping of his character are explored with a cliffhanger ending that will make you race to get the next in the series. The Sins of the Father continues the story of Harry Clifton, beginning with his mistaken sentence for murder when he takes the identity of a dead shipmate. The tale proceeds in Archer’s trademark easy to read style, and compelling, page-turning storyline. Machinations of lawyers, and the second World War intervene to delay Harry’s progress to his goal of proving he is not the son of a British baron. Emma finds out the secret, and spends over a year trying to track down Harry and right some of the wrongs. 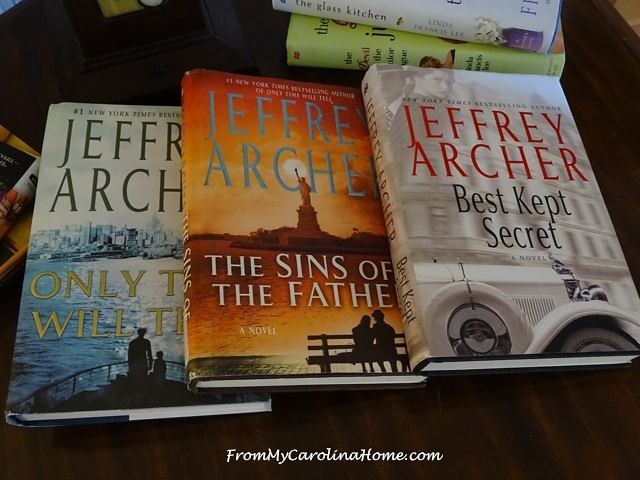 The third novel in the series is Best Kept Secret.  Harry and Emma’s son Sebastian grows up, and they adopt a sister for him.   Giles, Emma’s brother, gets engaged and his fiancee is not what the family would want. Marrying Virginia anyway, Giles has to deal with the fallout, especially when his mother passes and leaves a new will.  Virginia is not one to go down without a fight, and sets in motion a plan to exact revenge on those who she feels wronged her.  I enjoyed this one on audio, listening in the car on my way to and from work, and while doing errands.  It is much more interesting to do this than to listen to all the noise and commercials on the limited radio stations I can hear in these mountains.  There are three more books in this series, and I’ll get to them soon.

The third author is Erica Bauermeister who wrote The School of Essential Ingredients that I read last year.  An uncommon story, this book is a very interesting character study.  Lillian runs a cooking school on Monday nights, and the book explores the people in the class and how they interact with each other.  The food seems to bring about feelings that in some cases have to be shared.  It doesn’t have an earth-shattering plot, but is the kind of book to be read slowly and savoured. The descriptions of people, places, and particularly the food transport the reader to a magical slowing down of daily life, to live in the moment. The point is to derive pleasure in ordinary tasks, to trust yourself and be happy. This one is a keeper to be read again and again. 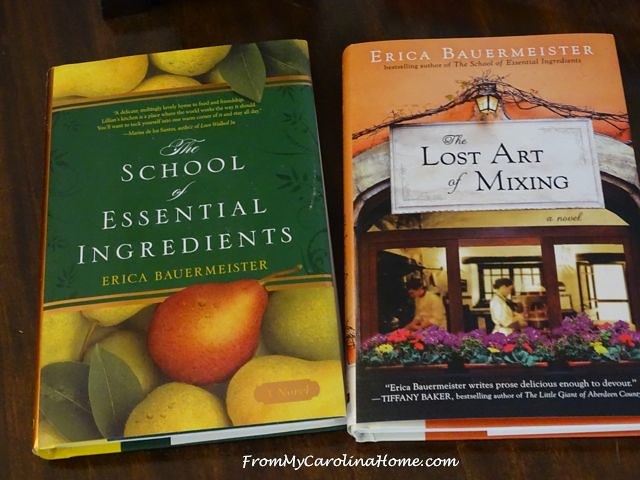 I was happily surprised to find she had written a sequel to the story called The Lost Art of Mixing.  This story is mostly a character study of several ordinary lives with trials and tribulations, ultimately savouring the day to day, the little joys, and small accomplishments that make up most of our lives.  Some of the characters from the first book in the series have created new relationships, and Lillian finds herself in a situation that will require delicate handling and a great deal of thought.  The exploration of each character in their view of the world, shaped by their experiences is a delightful journey.  Sometimes, the least little thing will bring to the surface buried feelings and resentments, but can also bring a resolution to a conflict not acknowledged up to then.

The disappointment was Diane Setterfield. While I enjoyed her Thirteenth Tale immensely, the next novel she published was a meh, not so much.  In The Thirteenth Tale, a reclusive author, Vida Winter, decides to tell her true-life story to an unknown writer after decades of making up stories about herself. She is haunted by a request to ‘tell the truth’, along with some disturbing memories. She tells her story to Margaret Lea who has her own pain connected with a family secret. This secret is similar to the secret Ms. Winter has to reveal and impacts Margaret in a way she doesn’t expect, impacting her decision to do the biography. 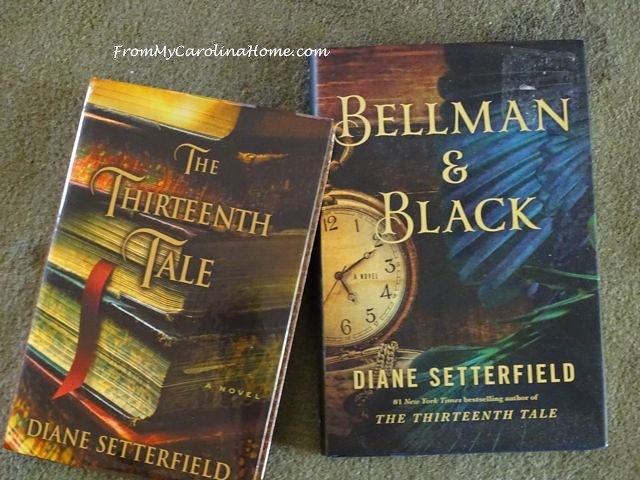 The story unfolds slowly, but builds on itself becoming more complex as it progresses. It completely drew me in as it went forward, making the book harder and harder to put down. The present day is woven into the tale as Margaret tries to verify some of the details, as when she finds the original house where Ms. Winter lived. There are several twists and turns, and you won’t see them coming. I am pretty good at figuring out how plots will progress, but this one surprised me more than once. Just when you think you know, there is something more that changes everything. Books play an important role in this novel, always a delightful discovery. The book is written from the point of view of Margaret, who is the daughter of a rare bookseller. Gardens and architecture provide interesting backdrops for the before and after aspects of the story.

Given the success of that novel, you would think that a book billed as a “perfect ghost story, beautifully and irresistibly written” would be a good one. NOT! I found Bellman & Black to be a disappointing, flat, dull story. Spoiler alert, although you won’t care as you shouldn’t waste your time or money on this book. I see what Setterfield was going for, the arc of a stone thrown at a rook (a black bird) by the young protagonist is a forecast of the story of Bellman’s life as he reaches higher and higher for more wealth and more business, before his decline. As death comes to those around him, he seizes the opportunity to profit from it, yet it still claims him as it does all who live. The story, however, never takes off into the promised intrigue of the cover. Would you call selling mourning clothing as a “deadly, macabre business”? I wouldn’t. I didn’t care about the character, and never felt the story really come together.

Now, I have to decide which book to read next out of the more than 200 on my To Be Read pile.  Here are a few of my choices. 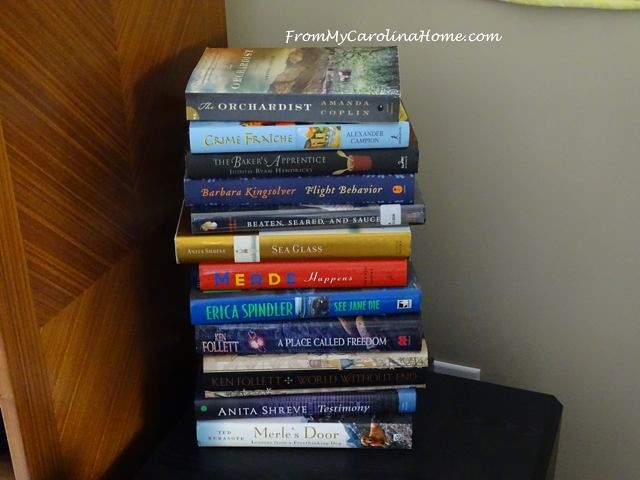 Perhaps one from the stack above? See anything you’d like to read with me? How about these? 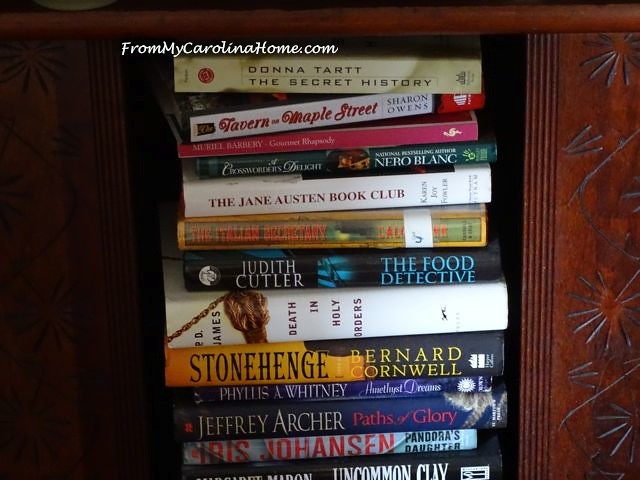 Or this one? See anything you have read and can recommend?  Most of these I got on recommendations from friends, although a few are authors I read again and again.  Actually, a few of these I have already put in the donation pile, as part of the book clean-out that I promised DH.  You know, once you’ve read three or four John Grishams, or Catherine Coulters, or Robert Ludlums, you’ve read them all.  So, cleaning out, I gave those to Books for Good. 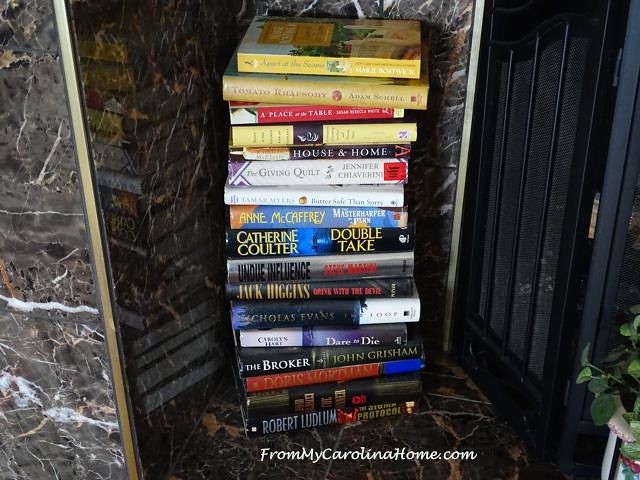 What are you reading?

21 thoughts on “Catching up on Book Reviews”