OK, I’ll admit it, I am a clearance and thrift store hound.  Who doesn’t love a great bargain?  Especially a bargain on something you have never known you might want before!  Such was the case as I found these really interesting little dishes on the clearance rack at one of my favorite haunts.  They were 98 cents each.  I bought all eight. 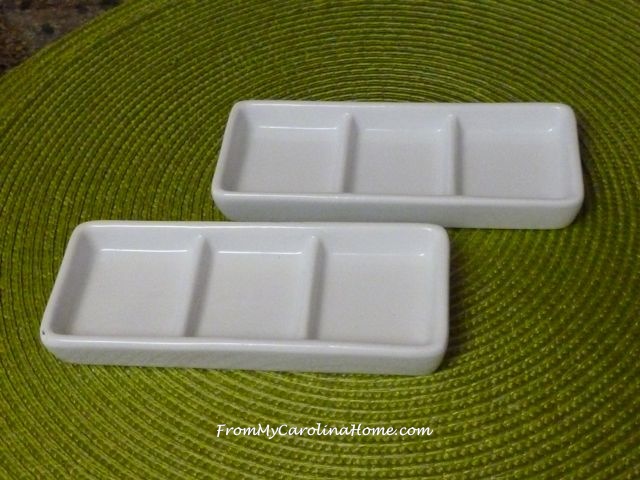 So, what are they?  They are dipping sauce dishes, mostly used in Asian cooking, but I had another idea.  I will probably use them in the future for something like egg rolls, but right now I am in cookout mode.  Summer is winding down, and my favorite time of year is right around the corner.  So, time for a cookout for two. 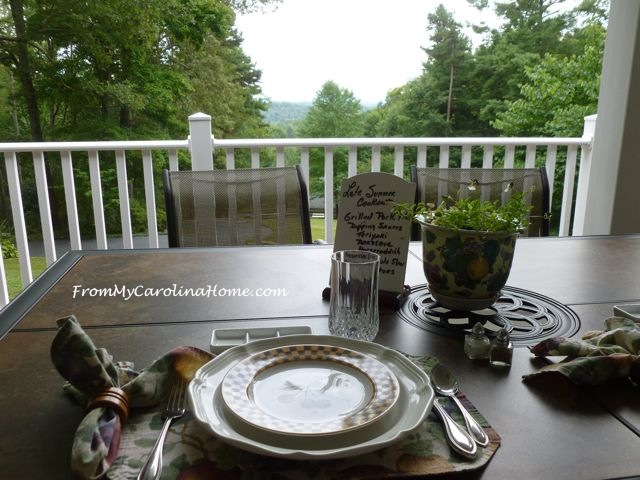 I set the outdoor veranda table with the fruit and leaf placemats with matching napkins.  The wooden napkin rings were perfect for this setting.  Basic white plates, with the cherry salad plates on top. 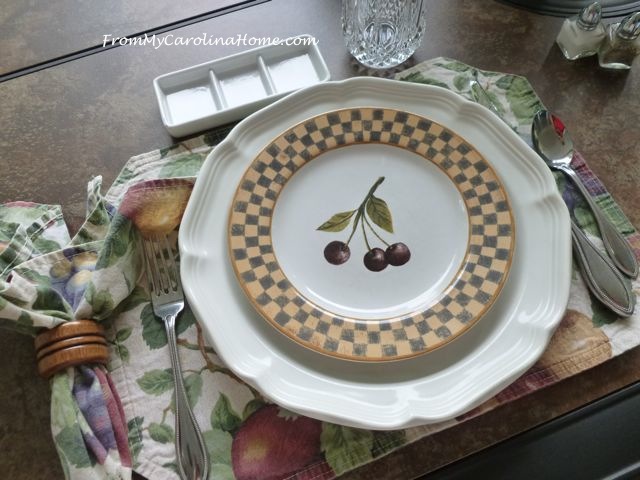 The colors went well with the placemats.  Adding glasses, flatware and salt/pepper completed the settings. 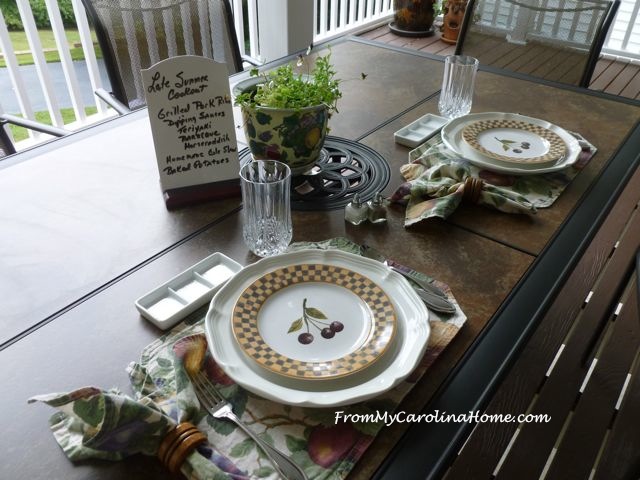 The centerpiece was also a fruit themed planter, with the end of season Johnny Jump-Ups showing their last blooms of the season.  I used my little ceramic board to announce the menu. 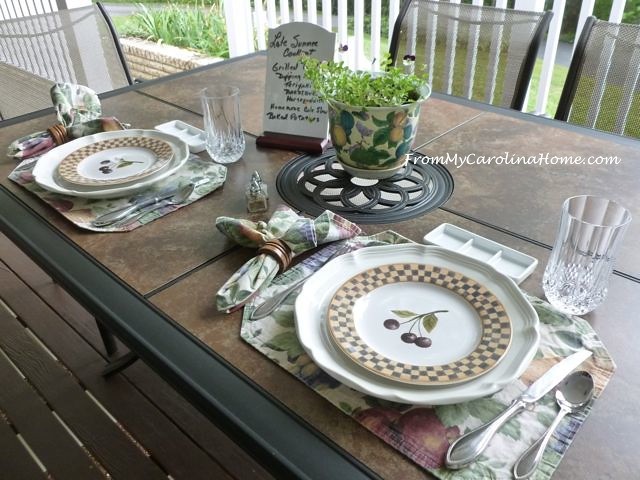 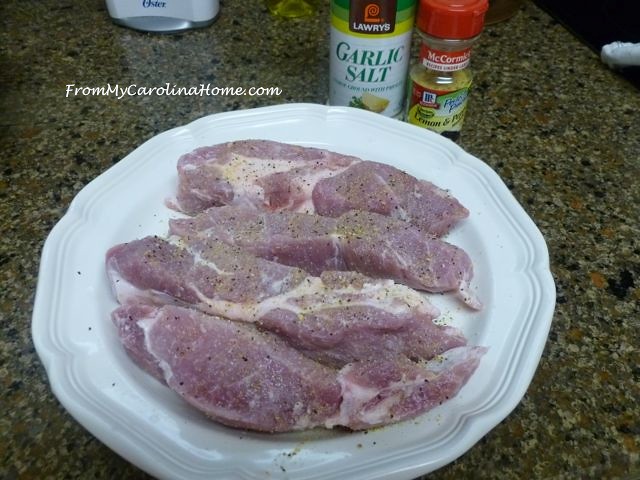 DH grilled them, and later said that not having barbeque sauce dripping on the grill was nice.  I filled the dipping sauce dishes and set them back on the table. 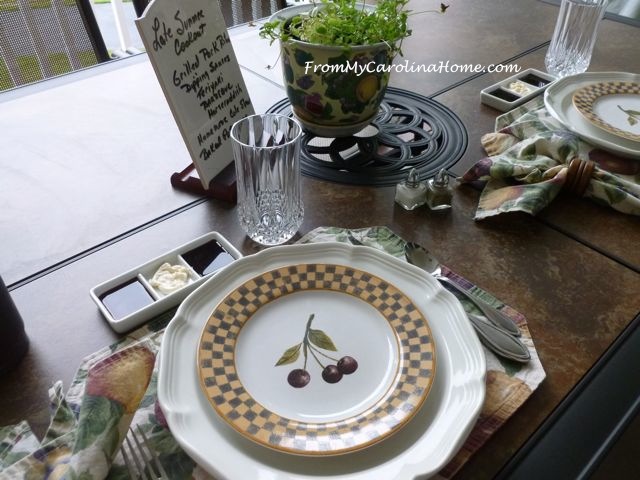 I planned to use barbeque sauce in one of the wells in the sauce dish, but discovered that I had run out.  So our sauces were teriyaki, horseradish and worchestershire steak sauce. 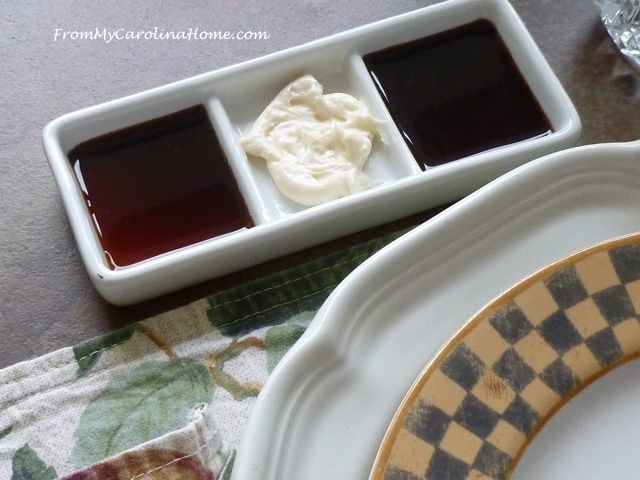 It was fun to dip the individual bites of grilled pork into the different sauces while enjoying the meal and the view.  I served the meat with sea-salt baked potatoes and a lovely salad with the last of my garden lettuce.  We found that the little sauce dishes worked better sitting on the plate as the salad was set to the side. 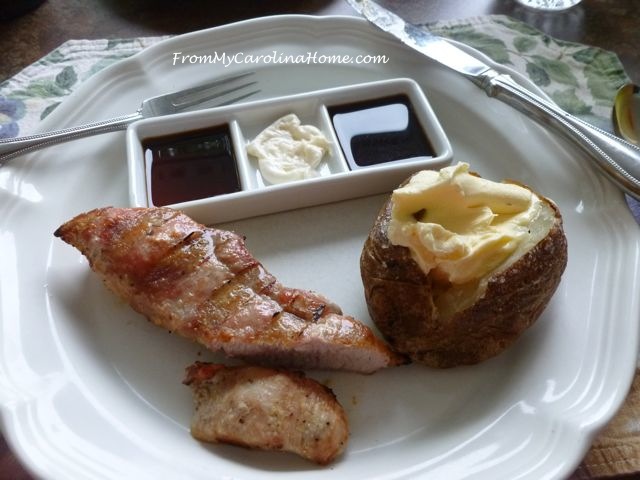 It was a nicely cool evening, and we enjoyed a lovely sunset after our meal.  The rain cleared off, so the clouds were beautifully lit by the waning light. 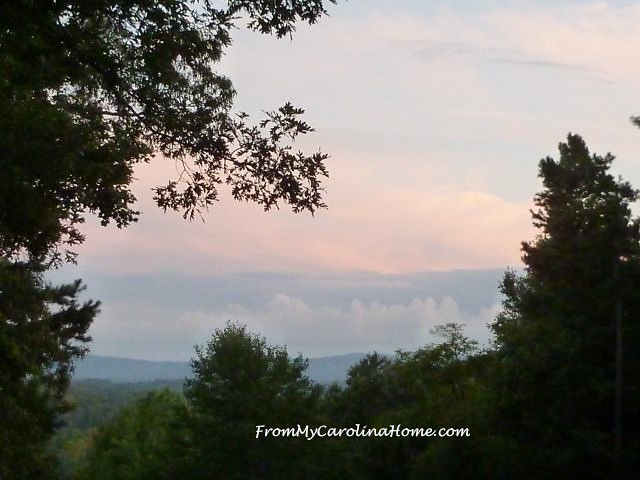 Have you ever used a dipping sauce for a meal at home?  Do you have any little specialty dishes like these?