It was a cool morning in August last Sunday, so I did a little garden cleanup.  I needed to do some weeding, and clean out the dead flower spikes from the day lilies.  I am pleased with the flowers this year, but the vegetables have been a complete bust.  In case you all think I only post successes, here are a couple of epic failures.   The spaghetti squash seeds I planted all got eaten by critters.  The garlic disappeared.  My onion only make one scrawny green onion.  Out of five tomato plants, I got a whopping four tomatoes.  Yes, there are only three here, I ate the other one, OK?.  It was tasty, but about the same size as these. 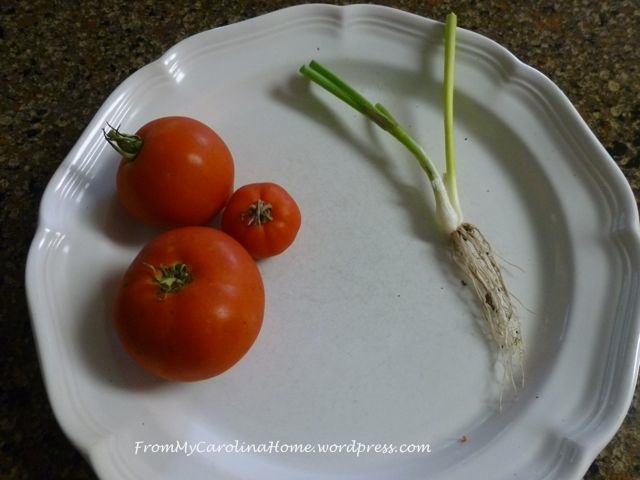 No squash, no peppers, and the bear or a rabbit got my entire spinach crop.  The basil is doing well in a pot, 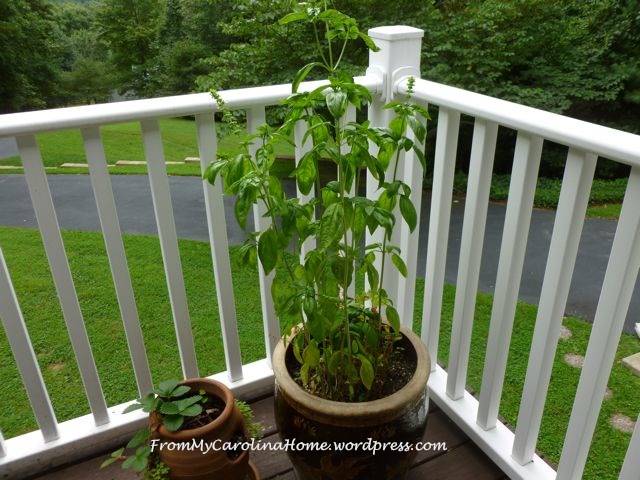 but the parsley has barely grown at all,… 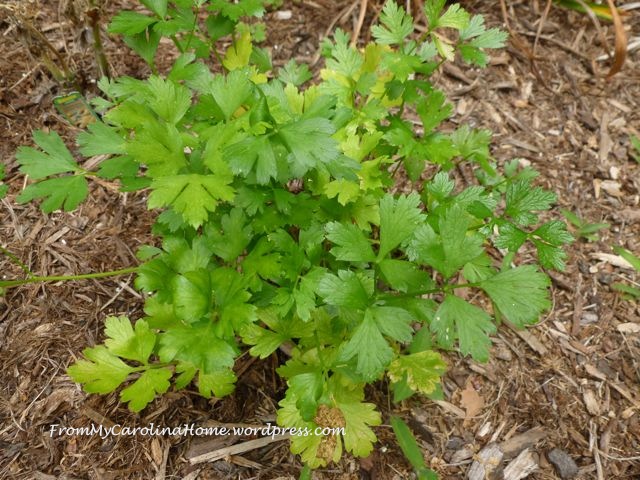 same for the sage. I just don’t understand it, they got the right amount of water and sunlight but no go.  I worked compost into the bed before planting so they’d have nutrients too.  Ungrateful little suckers.  The bloody grass grows there but refuses to grow on the bald patch in the yard. 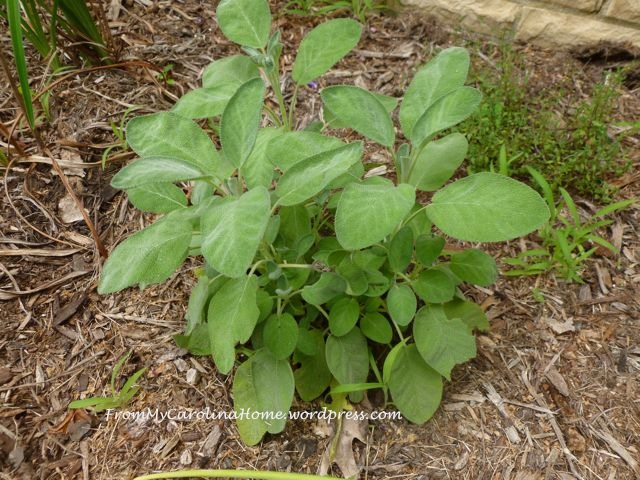 The hydrangea never bloomed either, like most hydrangeas across the country, the winter was too cold for it. 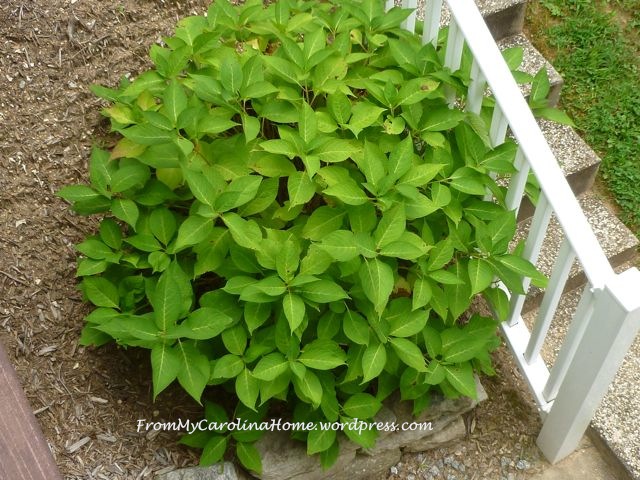 And the damn bear ate all but two of my peaches.  Serves me right for picking just two to let the other dozen ripen another day.  Next day they were all gone, pits and all. 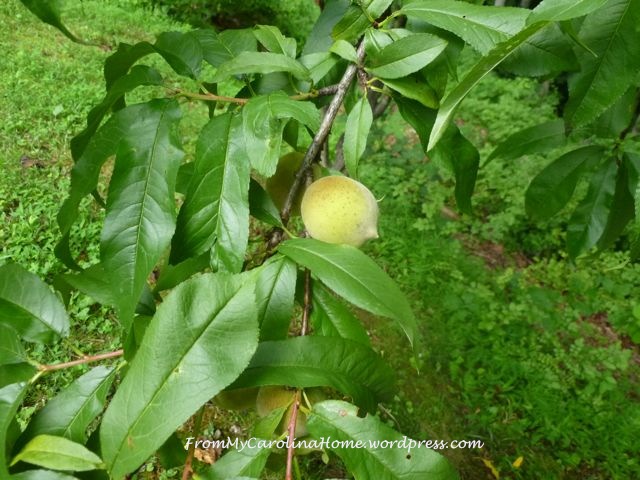 On the other hand, my friend brought me two monster zucchini from her mother in law’s garden.  They don’t get out there often enough for picking. 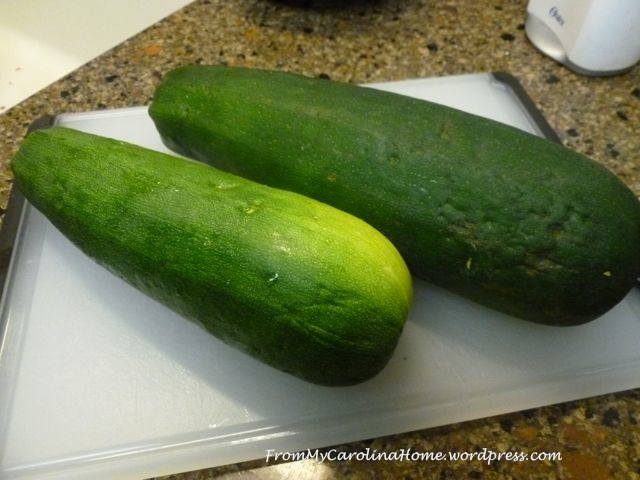 Lest you think I am exaggerating, I weighed them. Holy moly! 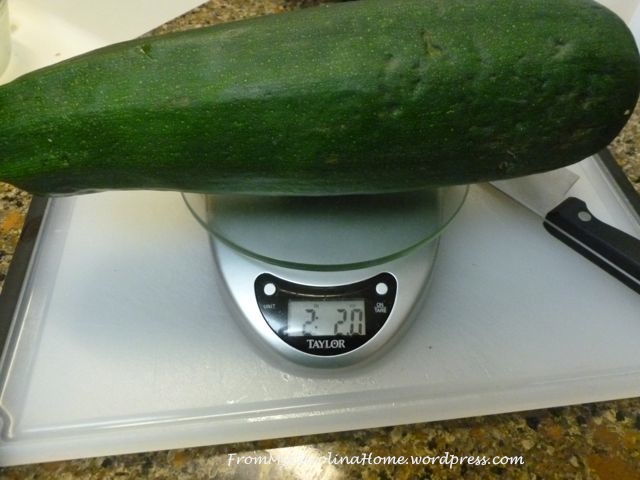 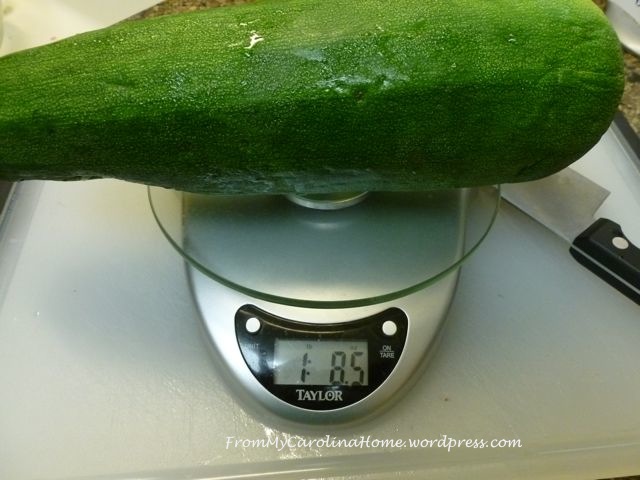 I have experimented with these for several dishes, all have been epic failures.  I practiced my new knife skills, though. 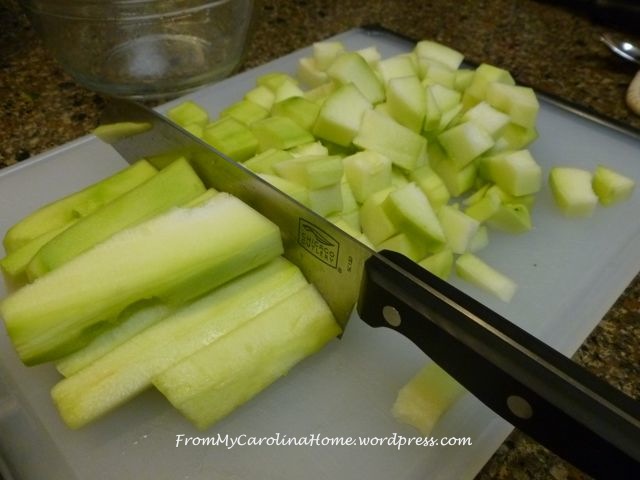 Oh, they tasted well enough for us to eat the results, but the dishes looked awful.  There is so much water in zucchini that the casserole was just too watery.  Just close your eyes and pretend it doesn’t look like something the dog barfed up.   Mmmm, zucchini. 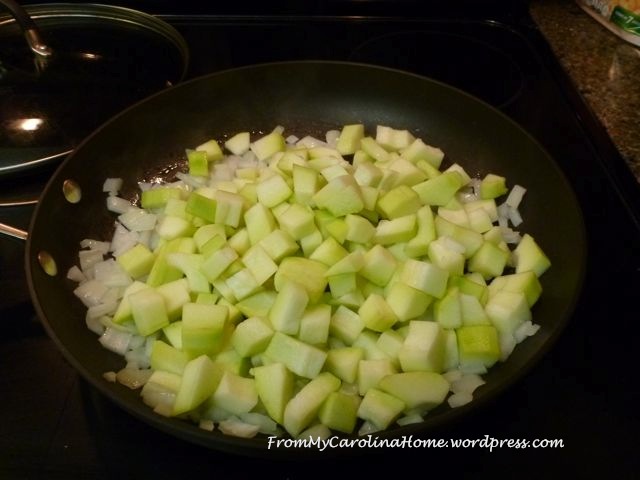 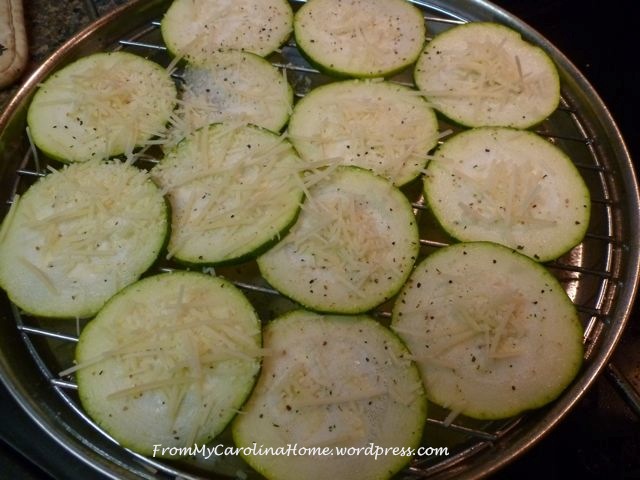 They remained soggy, no amount of baking would crisp them up. Not to be totally defeated, I stacked them up as a layered veggie side dish and ate them.  I thought I’d have a new dish for all of us, but back to the stove.  So I baked a loaf of fruit bread and forgot to put the butter in the batter.  Talk about a rubber mess!  Yet another epic fail for today!!  (Look, dear, homemade dog biscuits!)  What really bothers me is the waste of good ingredients.  But Sunday evening I got a very sweet note of support from someone who just found my blog, and she lifted my spirits immensely!  Thank you for your note, Johnnie.  I started again and made two loaves of my Banana Cinnamon Bread.

So, the flowers on the porch are still going well, the hanging baskets are starting to look a little ragged, but the torenias in the shade still look beautiful.  The pink geranium may yet give another bloom before autumn. 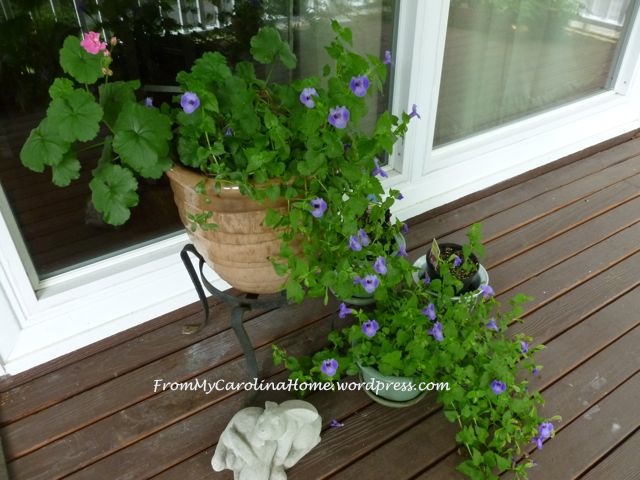 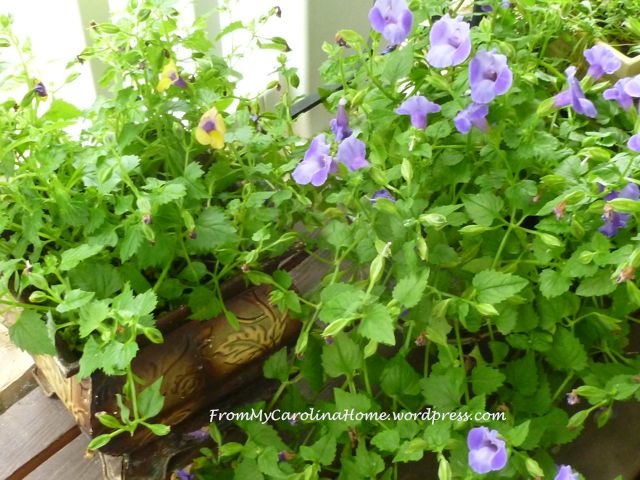 The butter yellow petunias continue to sing with the verbena, pink impatiens and blue lobelia, 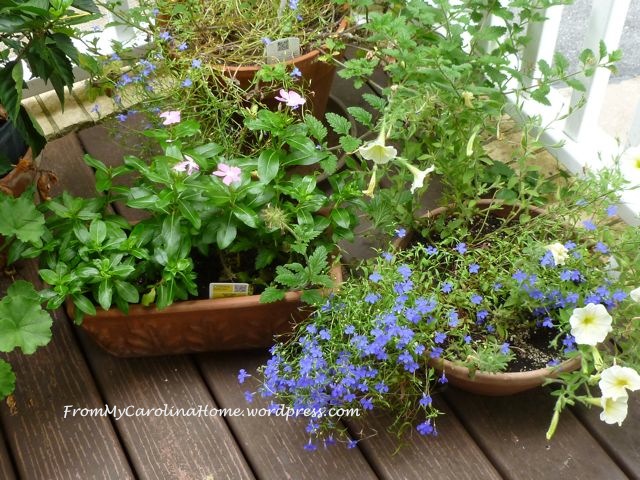 and I still marvel at the other lobelia, how full and lush it looks with those dark intense blue flowers. 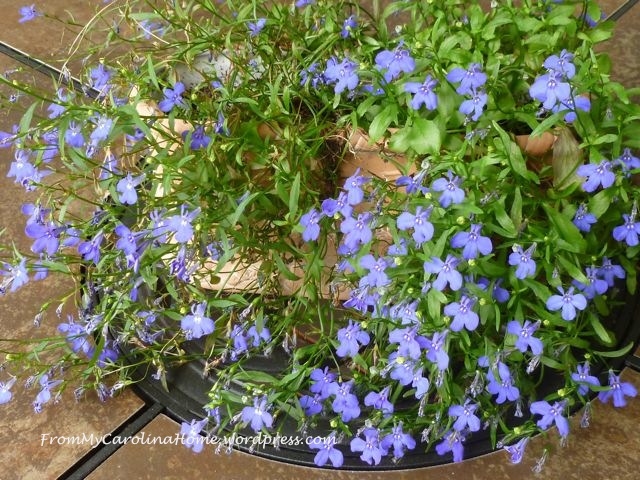 These New Guinea impatiens still are blooming just as much as they were in May.  I love white flowers. 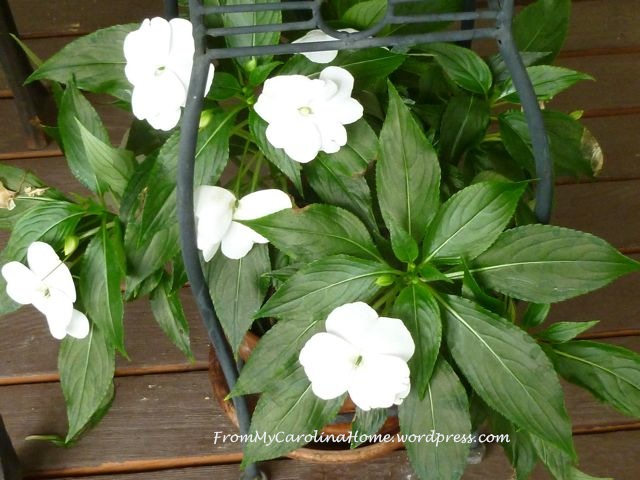 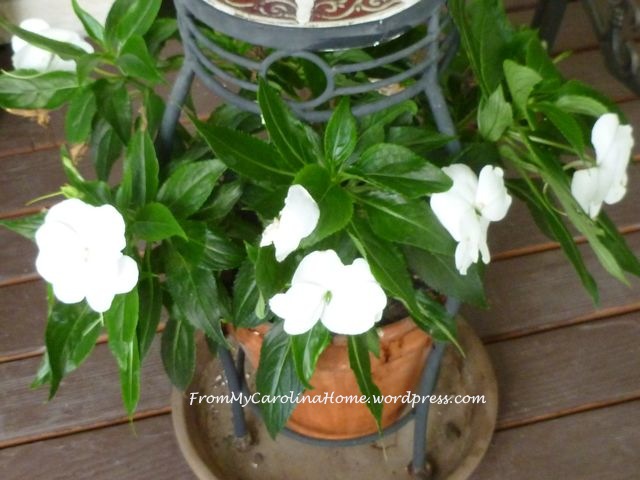 Out in the forest, nothing is blooming, but the fruits are coming in.  Blueberries, peaches, and strawberries are fresh and fragrant at the farmer’s market.  Our Apple Festival is Labor Day Weekend and we will have loads of varieties to choose from.  There is nothing like a Honey Crisp!!  Never heard of that?  Well, it’s because we eat all we can here in NC.  Very few make it elsewhere.  More on that later, I have to go buy butter.

7 thoughts on “Dog Days of August”