We always enjoy drives in our beautiful, western North Carolina mountains, and even more so with our MINI clubs.  We actually belong to two, one based in North Carolina and one based in the Upstate of South Carolina.  This time, the Upstate group planned a safely social drive where the route came very close to our home.  So, instead of driving an hour to get to the start, we waited for them to come by us and then joined the group. 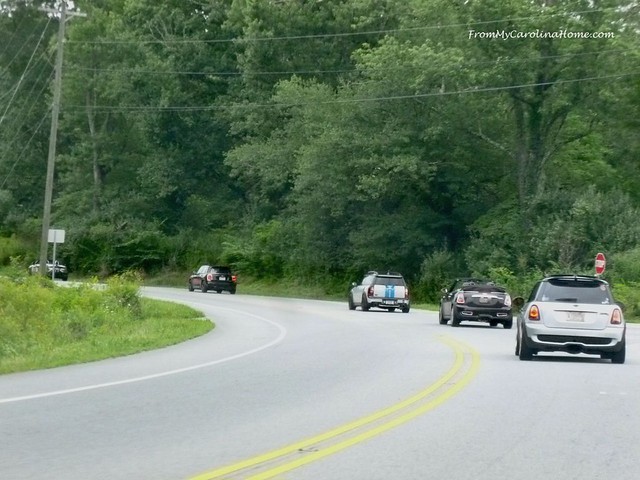 We jumped into the line about eight cars down, with another 12 or so behind us. 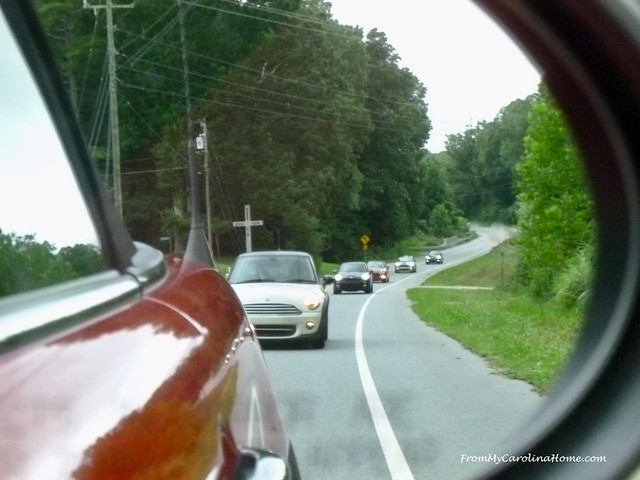 The route ran on pretty roads around the Hendersonville area, out to Brevard, then on Hwy 64 to Cashiers.  Heavy overcast skies kept the temperatures cool. 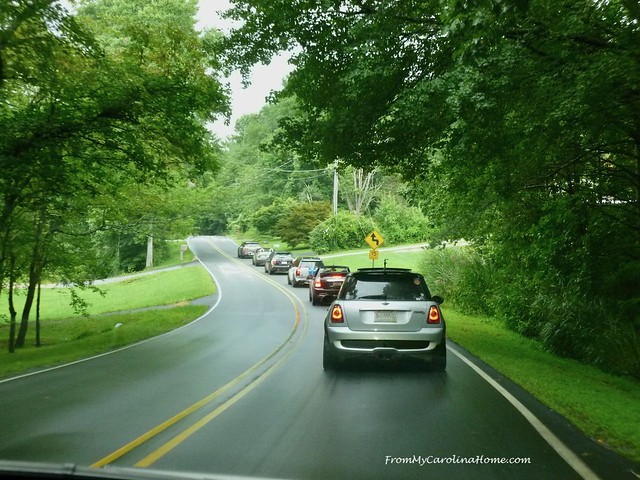 Our drive leader led us to Whiteside Brewing for lunch.  They have a large outdoor space, more than enough for us to have our lunch with safe spacing.  Several large cable spools more than eight feet in diameter served as tables, so we could sit on opposite sides and have a nice conversation. 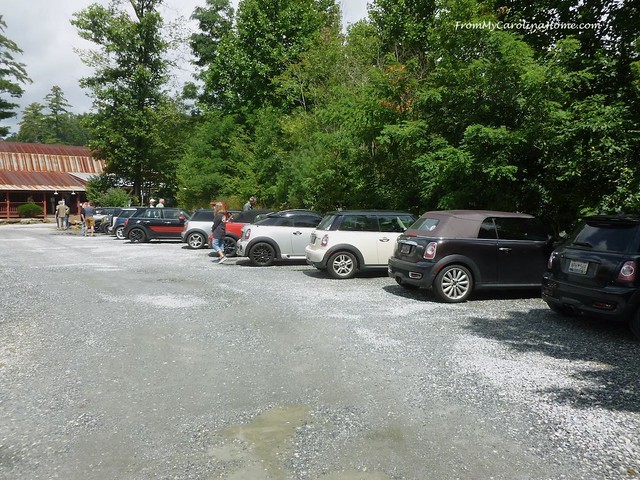 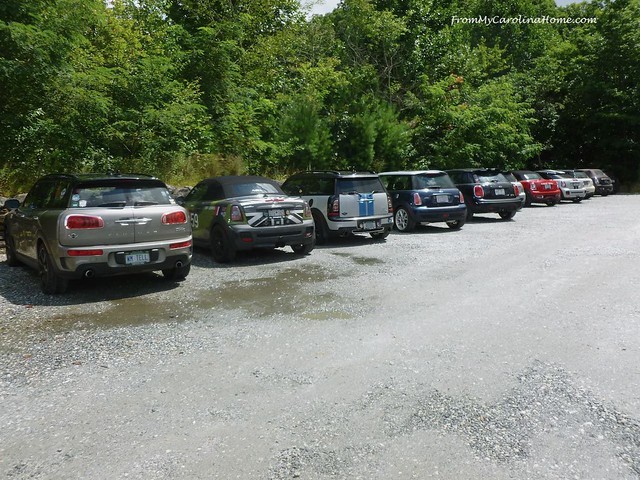 After lunch we were off again, heading towards Cullowhee and the Valley of the Lillies. 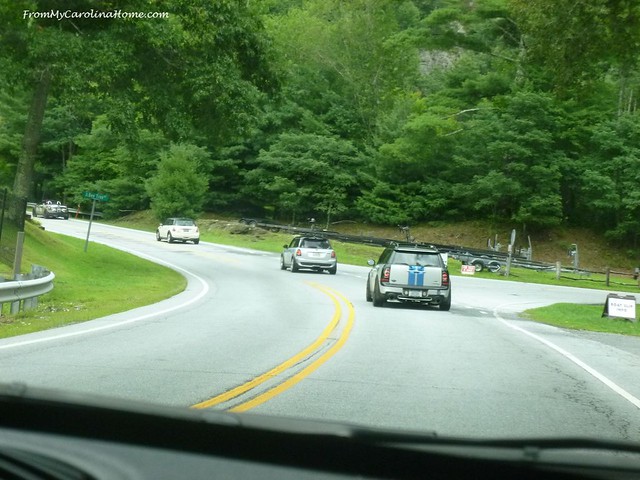 Clouds threatened as we drove alongside the Tuckasegee River, a native American word for ‘place of the turtle’.  This river is entirely contained within the state of North Carolina, beginning near Brevard and emptying into Fonatana Lake on the western border. 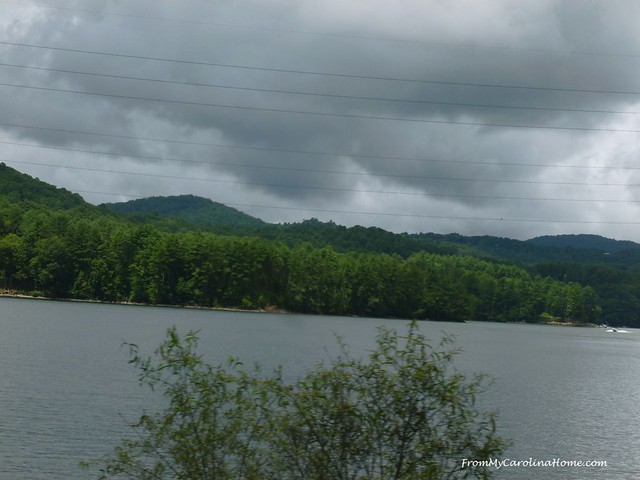 Locals call this river the “slow moving turtle”.  The drive followed the river for quite a while, and we still had the top down on our MINI, as did several others. 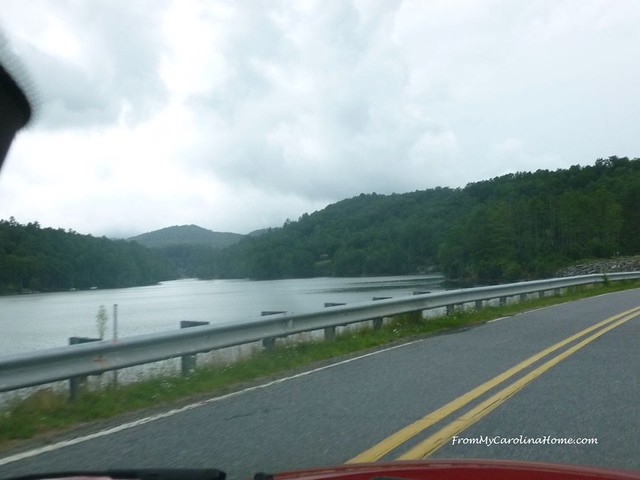 Driving by pastoral scenes of old barns and grazing cows, we ran out of luck with the rain.  Tops were put up quickly on several convertibles, and we were on our way again. 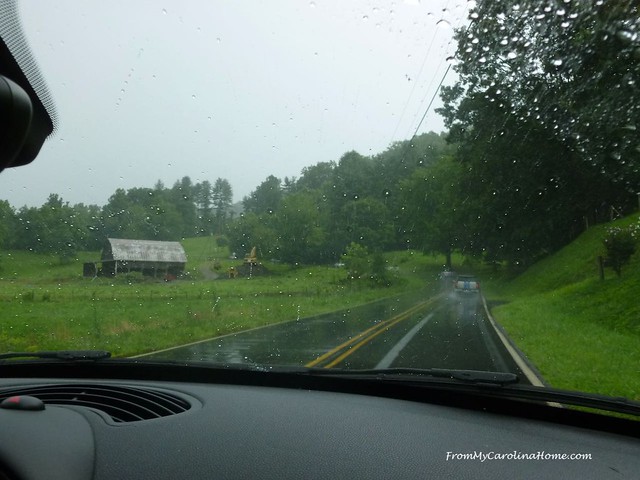 The mountains are beautiful, even in the rain. 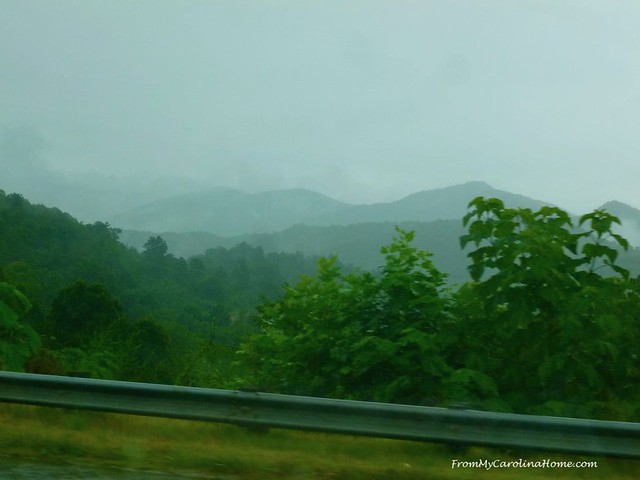 On the way, our drive leader pointed out this church.  This is Riverview Baptist Church, an historically black church, which has not been in service for many years.  Doing research on it, there is no record of the date it was built, however, according to the research of high school student, Tara Hinton, the church reflects the style of architecture prominent between 1880 and 1920.  It is originally a wood structure, with a brick overlay added later, and a stamped metal roof overlay.  See her very well researched youtube video –Black Church Restoration to Build Inclusive Narratives of WNC.  It is slowly deteriorating, but there are currently no plans to restore it.  Ivy is growing across the weathered red bricks, but you can still see the stacked stone along the foundation, and the interesting curved shapes above the window and door.  The property is being maintained, as the grass was mown, and the trees have been cut back a bit from where they were in a Google maps view. 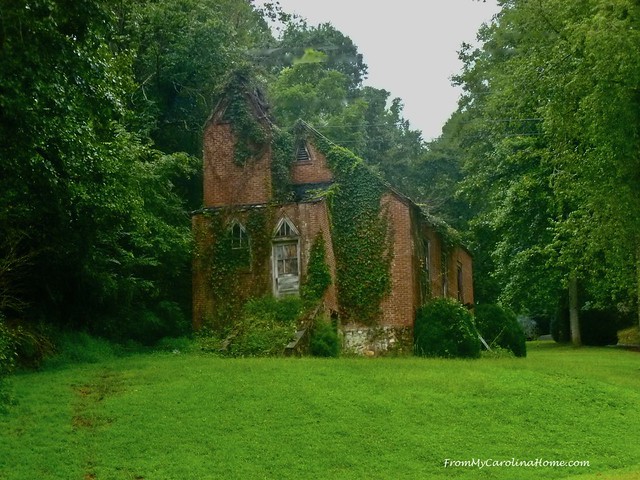 On we went to the next stop on our day long drive.  The apple trees of Barber Orchards in Waynesville. 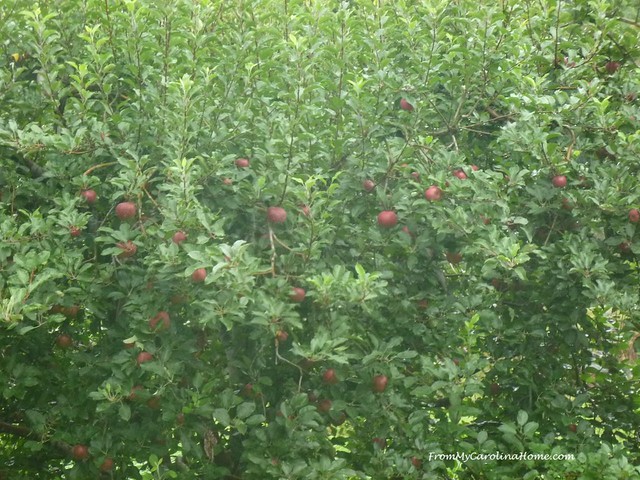 Of course, I had to have another shot of most of the MINIs parked across the street from the market stand. 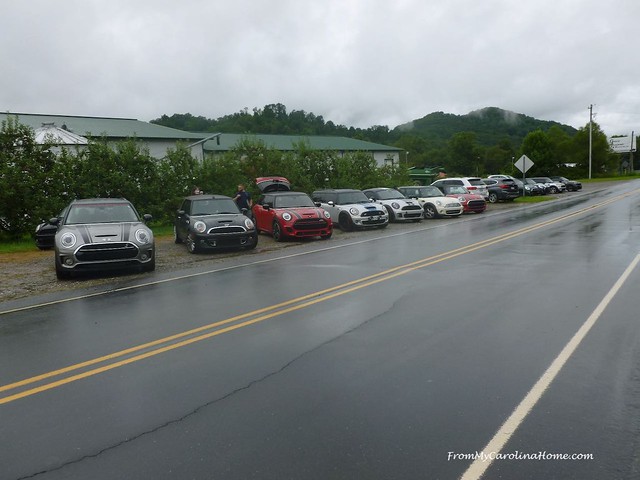 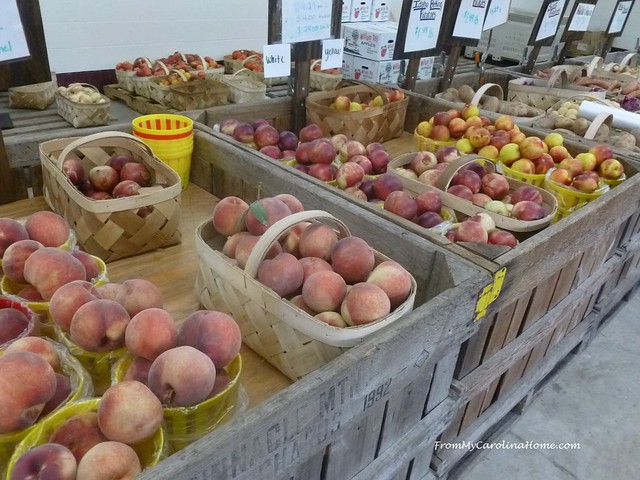 and baskets of tomatoes and cabbages. 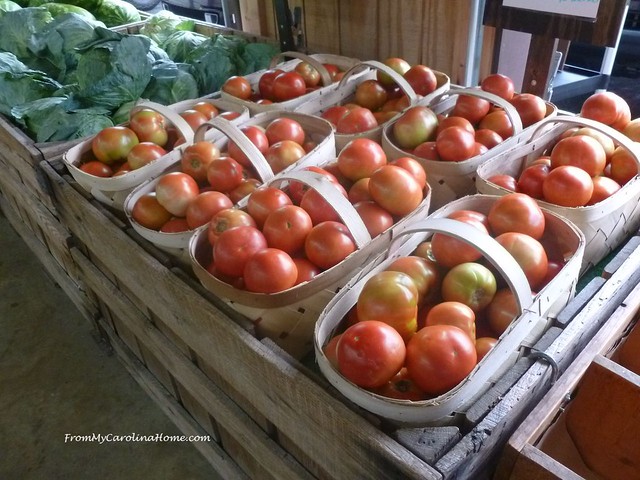 Back on the road, we made the turn up to the Blue Ridge Parkway. 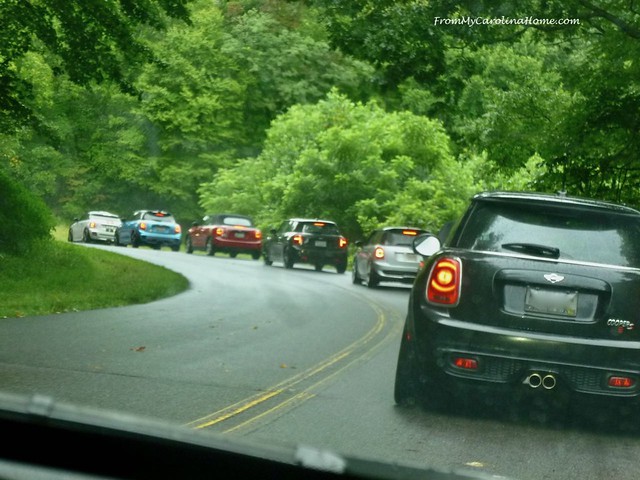 The parkway was foggy, but we did stop briefly at the highest point for a photo. 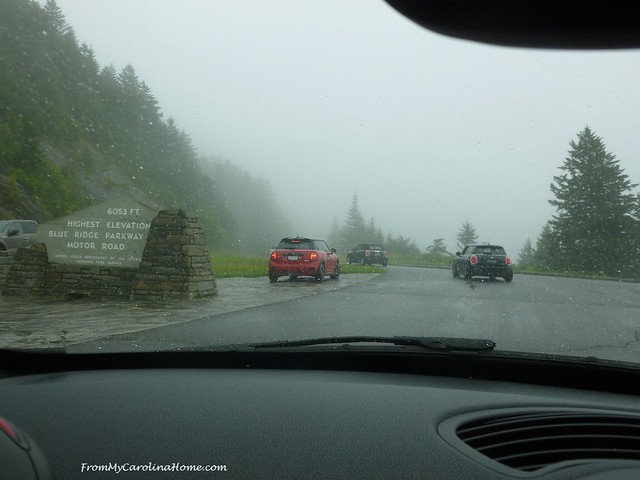 The rock formations on the side of the road are so interesting. 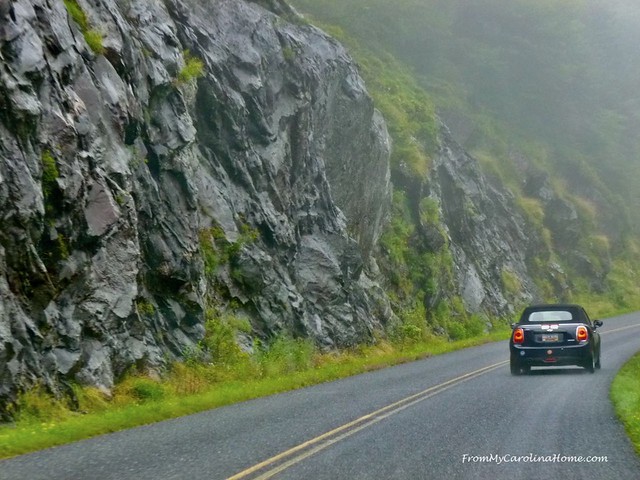 We couldn’t see long vistas at the top due to the rain. 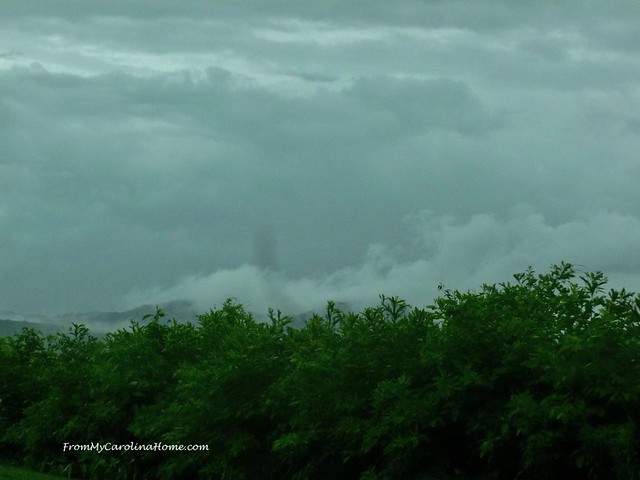 I did manage to get one shot a little farther down, layers of mountains with fog in the valleys stretch as far as the eye can see. 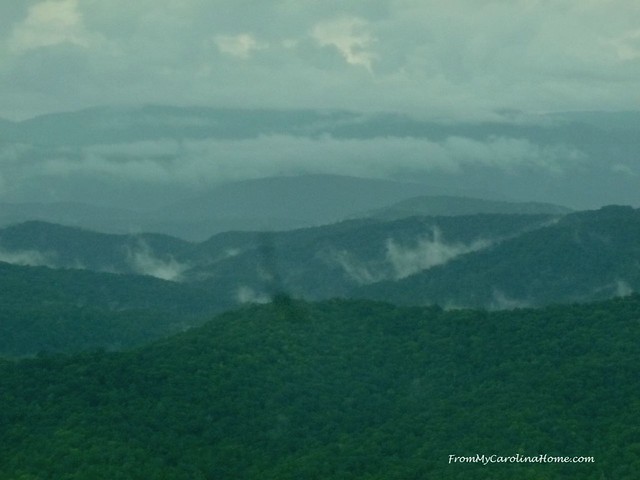 Lots of tunnels are on this part of the BRP. 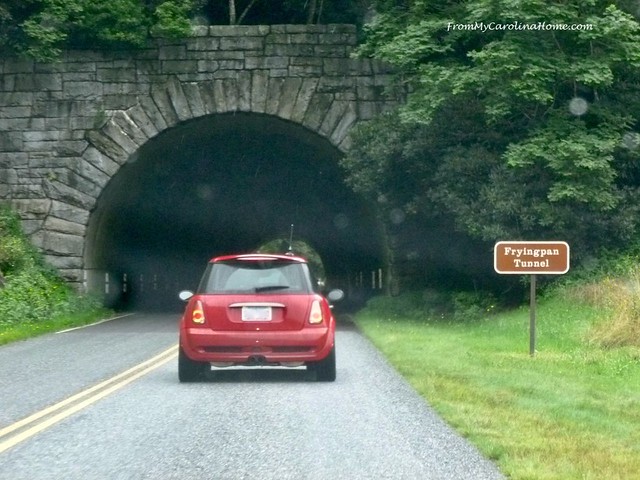 The end of a fun day, the caravan of MINIs left the parkway in Mills River, and we broke away to head home while the rest of the group continued back to SC. 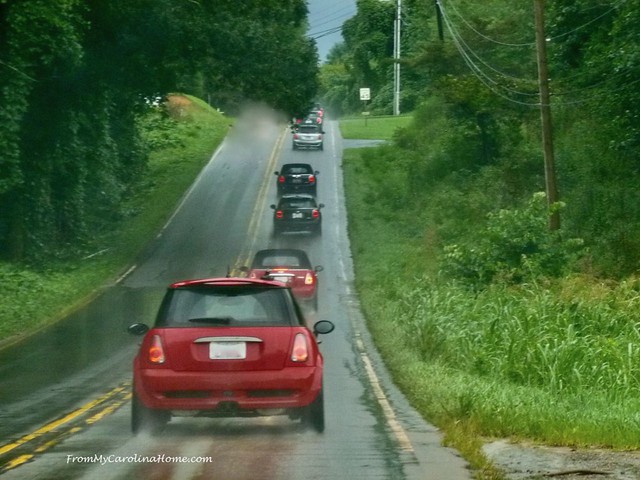 We had a fun day in spite of the rain, lucky that it wasn’t raining during our lunch or farm stand stops.  Many thanks to Bill and Mary Lou for a fabulous route, and safely social event.

Where have your safely social outings taken you recently?

Psst – C&T Publishing’s 50% Off E-books sale ends today!  Just select your title, change the format to ebook, and add to cart for the credit to be applied.