It is hard to wrap my head around the fact that it is the middle of June, although it is certainly getting hot enough.  I am not a fan of summer heat, although I do like the cool mornings and evenings we usually have.  June is the month the fireflies usually come out, and we see them lighting up like twinkle lights in the meadow at dusk.  Abundant green in the forest and a profusion of flowers are here, and the critter watch is fun.  As usual, when I get going on the garden, this will be a long and picture heavy post.  My hydrangea is covered in buds and the blooms are opening.  I am delighted to see they are my favorite, lovely lavender color. 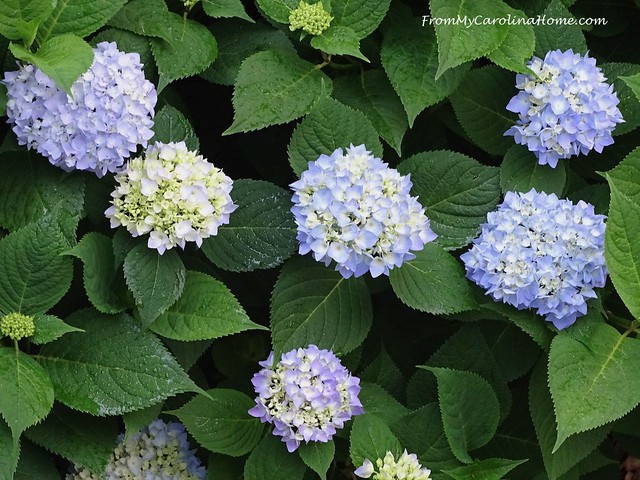 Some are lighter and more pale with a bit of white right now, but this will darken over the next couple of days. 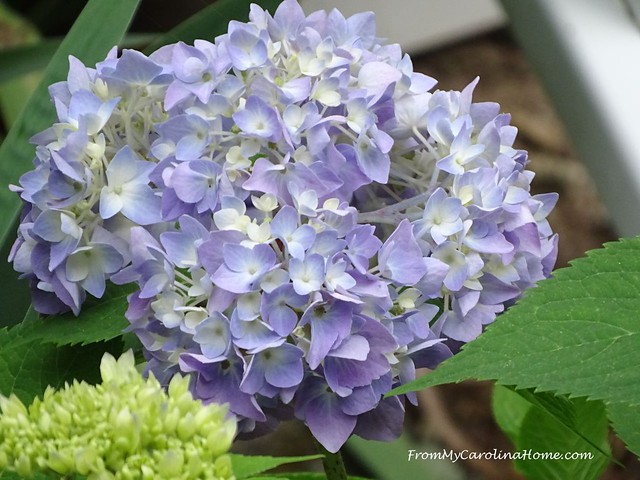 The peach and yellow day lily is revving up, with a huge number of buds preparing to bloom. 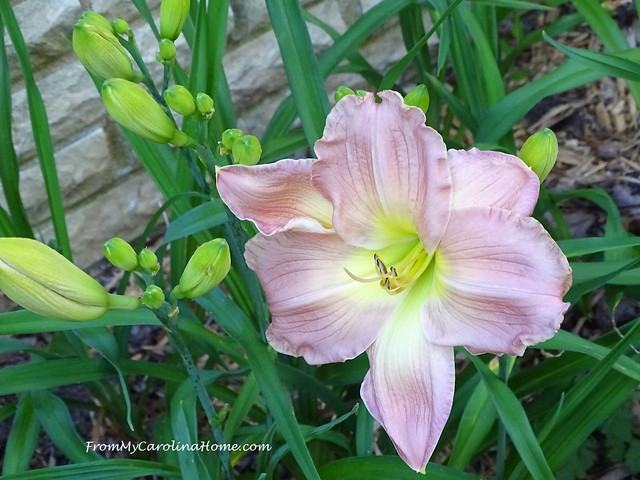 We had a new visitor.  This little woodchuck was chowing down on the clover in the front yard near the house.  I need him to stay there and leave my other plants alone.  But he is cute.  He may actually be the same one from last summer that got stuck in our garage once. 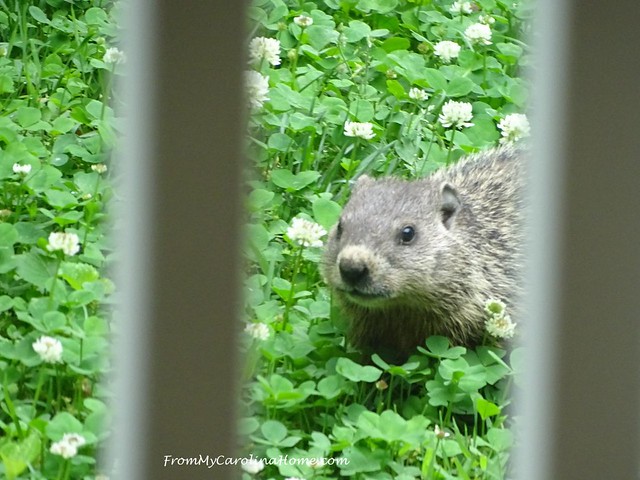 The geraniums continue to bloom in this intense pink color.  I needed to prune them a bit, so I cut this flower after I took the picture.  This would make wonderful color for some handmade paper, but the flower stems stink too much. 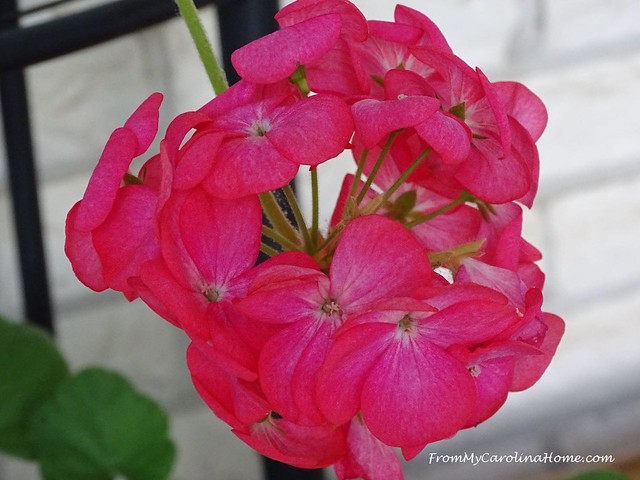 The local bear dropped by to check out the seeds dropped from the bird feeder.  It is set too high for him to reach, but he can snuffle around the base.  Still, I’d rather he moved on, so I made some noise to encourage him to leave. 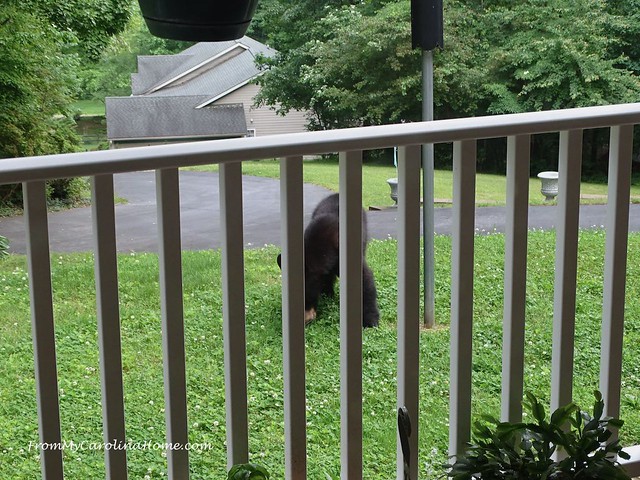 When he got farther away, I stepped onto the veranda with my long lens camera to get a better photo.  He is growing!  He has doubled in size and weight since I saw him last, well, provided he is the same one.  I suspect that he is, but really I have no way to know for sure.  He looks to be approaching 200 pounds now. 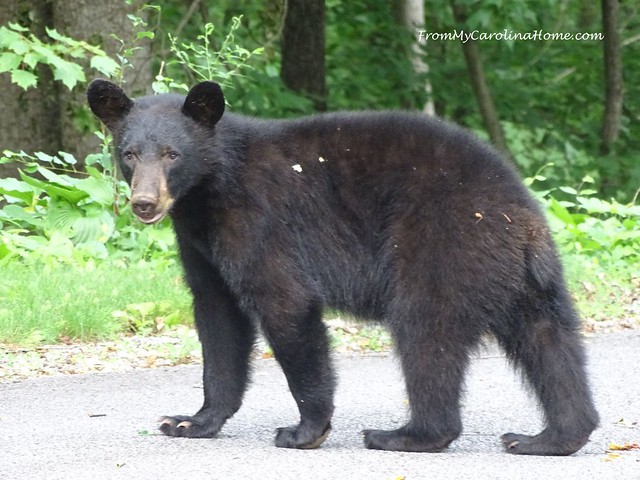 The torenias I planted in the hanging baskets in May are doing well.  There have been many hummingbird sightings, but none have stayed long enough for a photo. 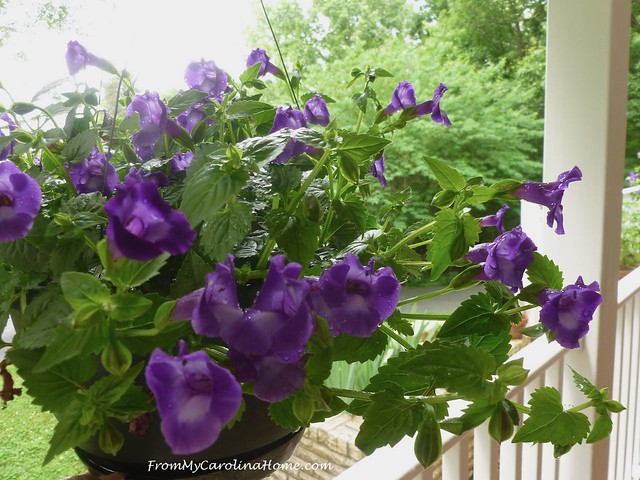 Oliver continues to make an appearance almost daily.  He gets his tidbit if he stays off the veranda.  I had to chase him off the veranda with a broom the other day so he didn’t get a treat that day. 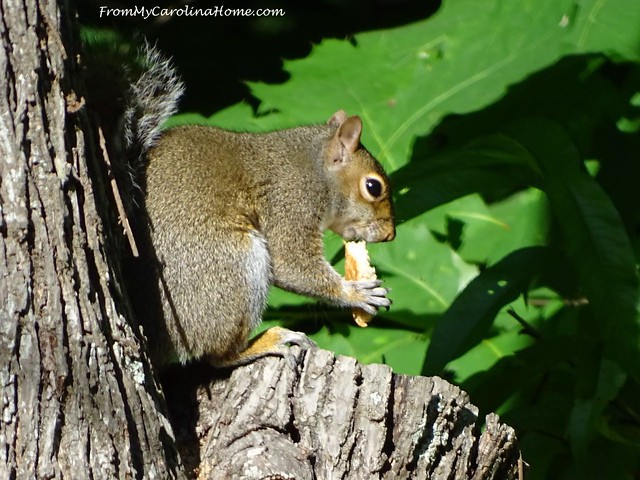 Lately, he has been bringing a buddy with him, and they both will sit up and beg.  No, I cannot really tell them apart, until they get their handout.  Oliver always goes to the tree stump or the retaining wall below it to eat his, while the other one prefers to sit in the grass. 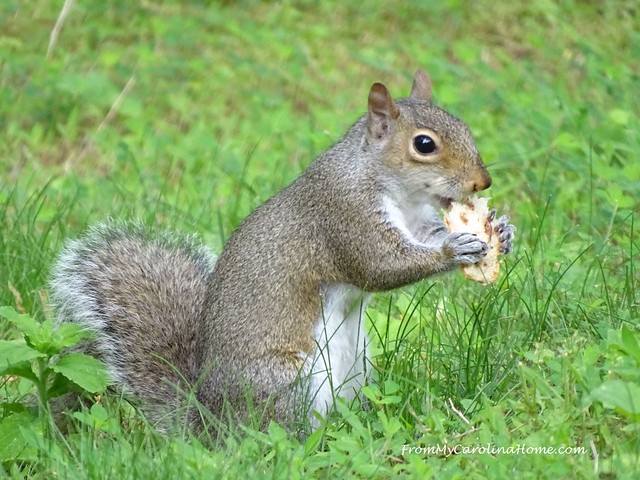 The teacup planter is doing well, with more torenias.  My birdcage was being visited by a Carolina Wren, and I figured that I better get some plants in there before he decided to build a nest in it again. 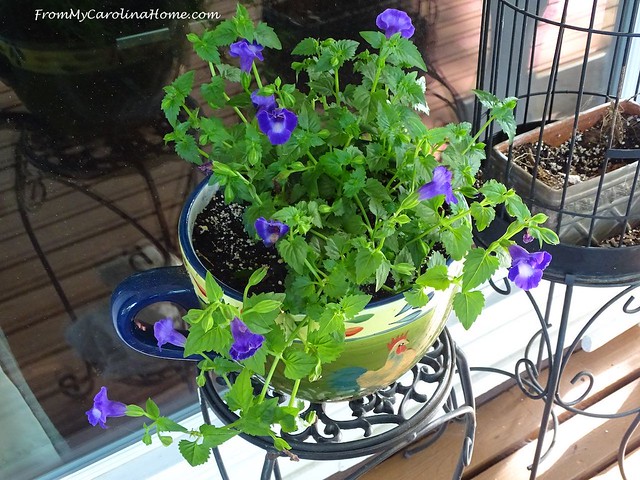 A trip to the big box store’s garden center yielded a bonanza of bargain flowers.  I got a flat of violas off the bargain rack at $1 each, two six packs of petunias for $3 each, and a few assorted other flowers for 50 cents.  I wanted some impatiens for the tile top tables, but they only had a weird orange color I didn’t like.  So, I bought white begonias instead. 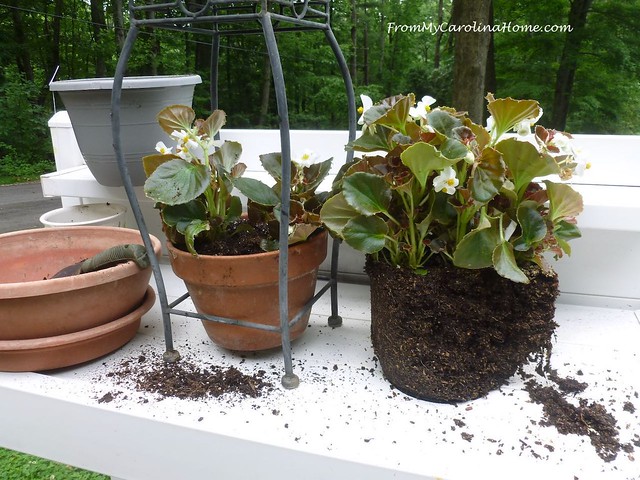 One hanging basket was $9, and it had seven plants, so they came out to just over $1.25 each.  That’s almost as good as the bargain rack, and these were healthy and vigorous.  I carefully pulled them apart, and planted two in each of the table pots. 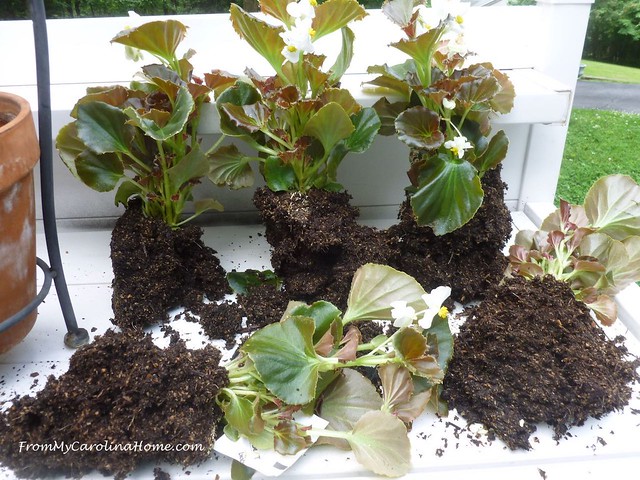 Those go between the rockers that My Sweet Babboo re-varnished for the season.  A third one sits on the other end of the bench.  They are just the right size to hold a cup of coffee in the morning, a cold glass of iced tea in the afternoon, or an adult libation in the evening. 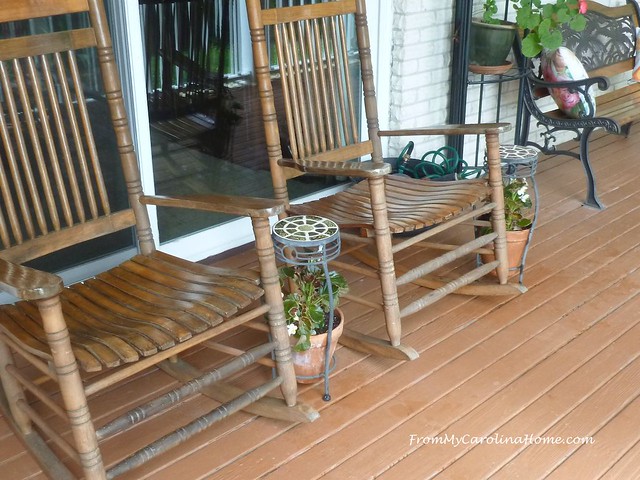 Back to the potting bench, I decided to put the petunias and some violas in the strawberry pot.  I’ve tried several times to actually grow strawberries, but that hasn’t worked. 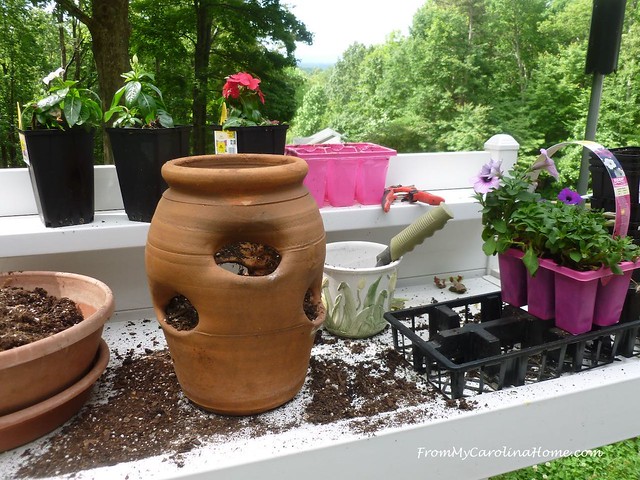 More violas are planted in the white urns.  The corner pot holds a tomato, and the other two have dahlias. 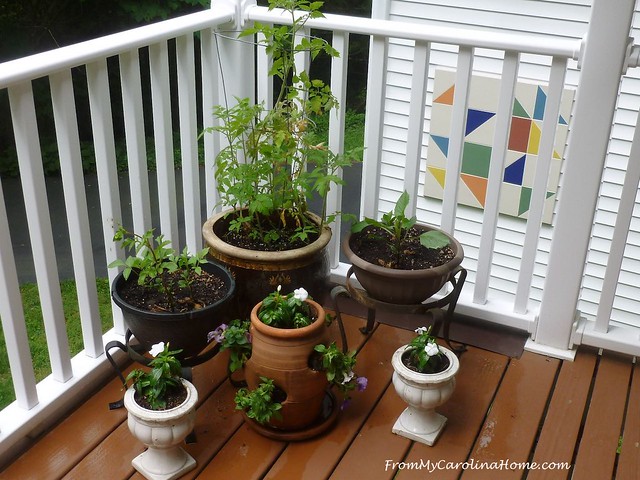 My tomatoes are strong and growing well, finally I see some yellow flowers. 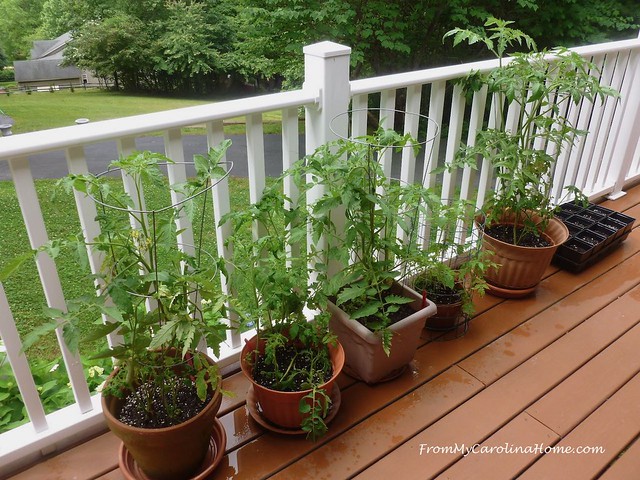 This little pot sits on the brick planter to add a bit of color and interest when the bulbs are finished blooming.  The dusty miller was still alive from over the winter, so I pruned it a bit, then added a white viola and a red celosia.  I think those colors will go nicely together when the plants get a bit larger. 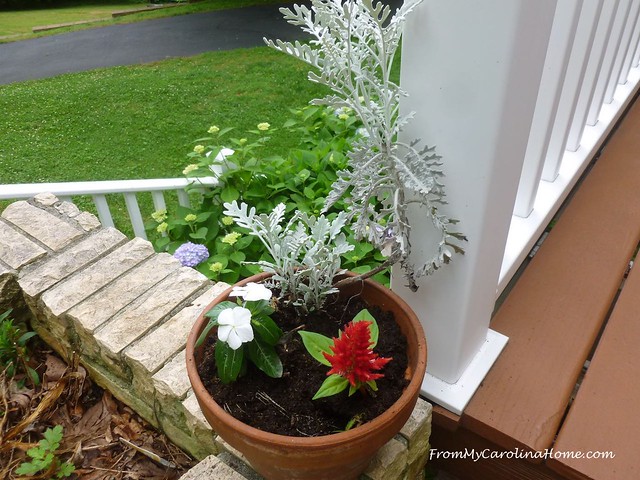 And then, the woodchuck was back.  We’ve seen him enough days that My Sweet Babboo says we need to give him a name. 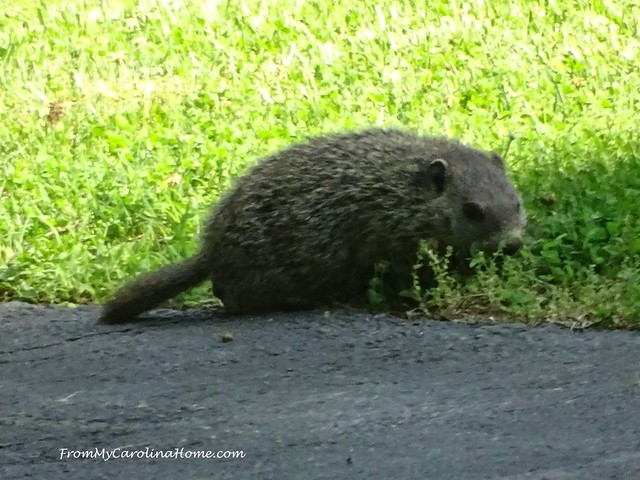 The Thanksgiving cactus is put outside, now that the overnight temperatures are warm.  I’ll ignore it for the next several months, only giving it some water when it droops.  I will shake some time release fertilizer on it.  I use Osmocote granules. 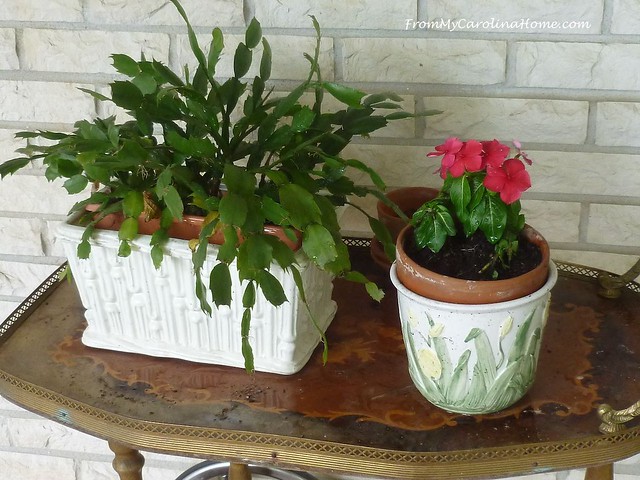 Another pot of torenia sits on the little wood cart.  I have seen the hummingbirds a few times, and I am hoping I can get a picture of one near this window. 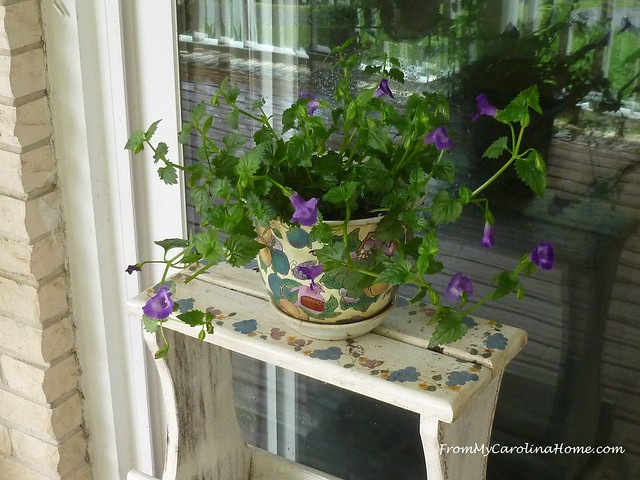 Begonia and petunias are now in the birdcage, and a pot of white viola sits on the iron table shelf below the teacup full of torenia. 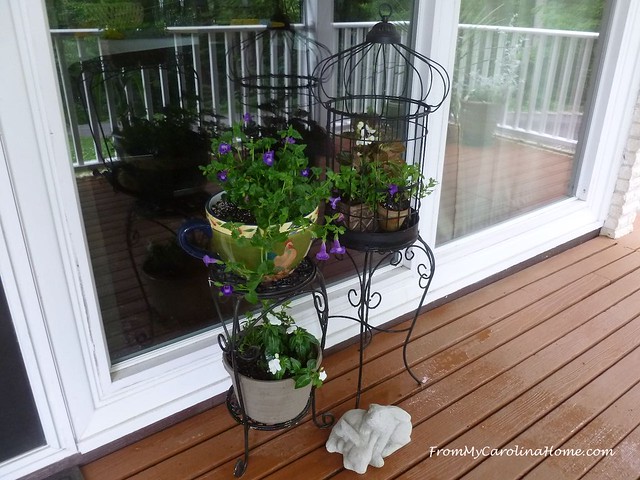 I am going to have to repot this spike dracaena at some point.  The roots are coming out of the soil.  I hesitate to put it in a heavy pot, as it has to be moved several times a year.  So, that one will need some thought, and likely a plastic pot. 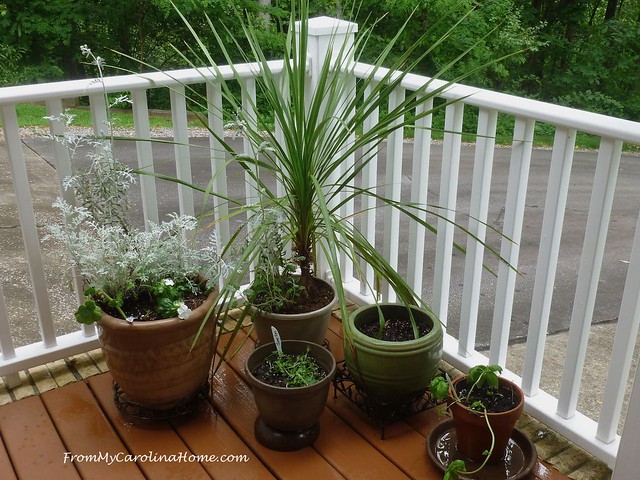 More torenia in the rectangular planter sit on an iron table. 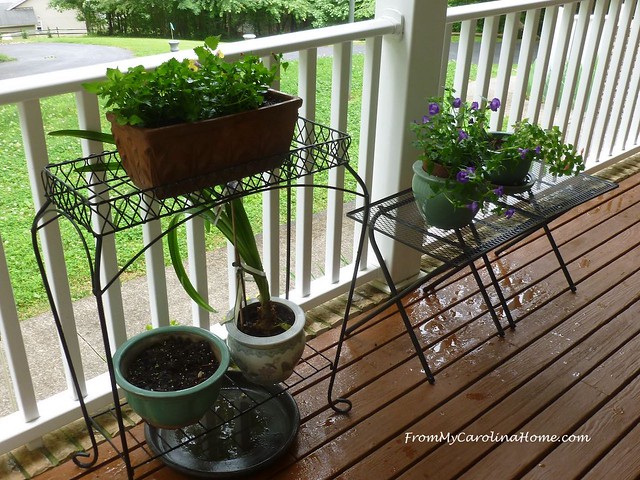 The variety is called gilded grape, a pretty yellow with a purple throat. 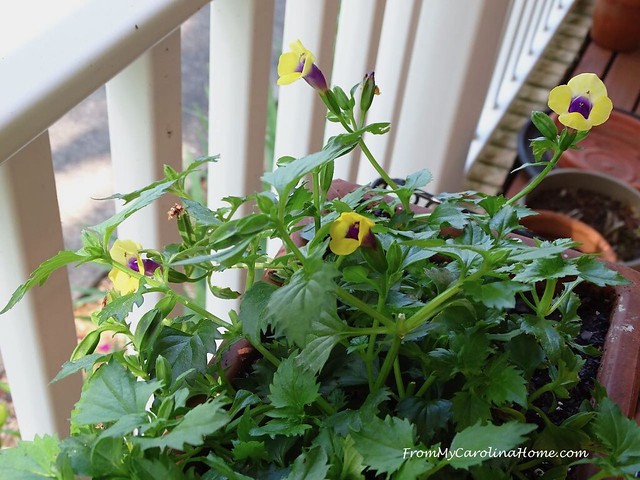 The veranda is looking like summer, full of green and color.  It is a sanctuary. 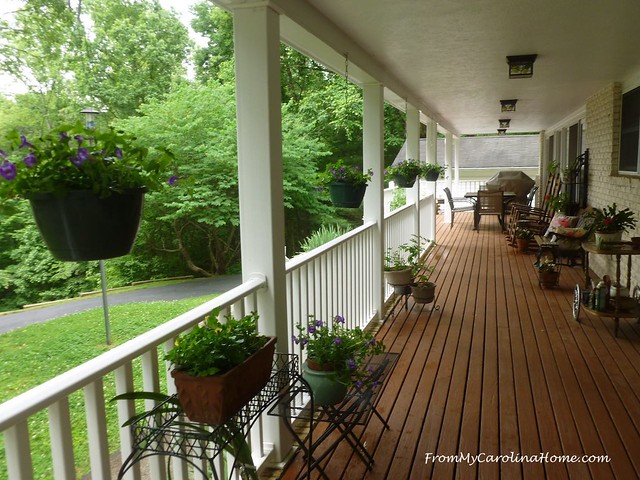 Sitting with my camera, I am still taking photos of birds in trees.  This cardinal sat on this branch for quite a while, singing his heart out. 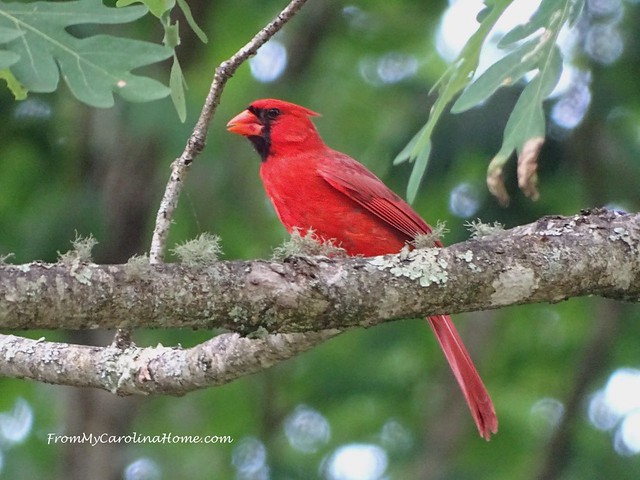 Another gorgeous bloom appeared on the hydrangea.  There are so many now that I cut a few to enjoy in a vase on the kitchen counter. 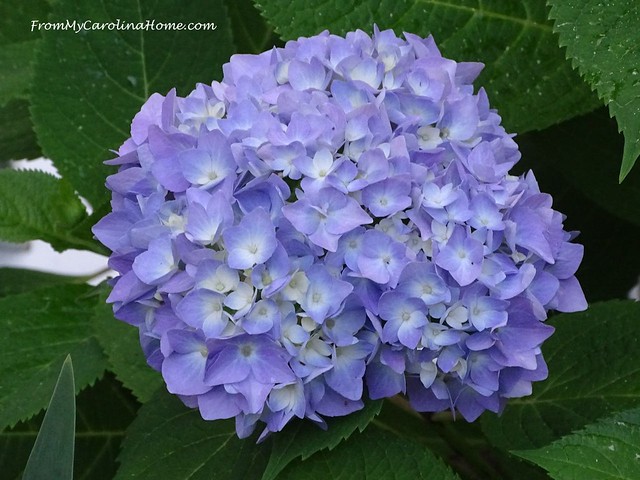 What is happening in your garden?  Do you have a suggestion for a name for our woodchuck?  Do you sometimes cut flowers for enjoying inside?

41 thoughts on “June in the Garden”