The garden tomato crop is winding down, but still there were too many to eat in salads and on sandwiches alone. I’d made enough Tomato Pies, and I didn’t think DH would eat another one, LOL!! 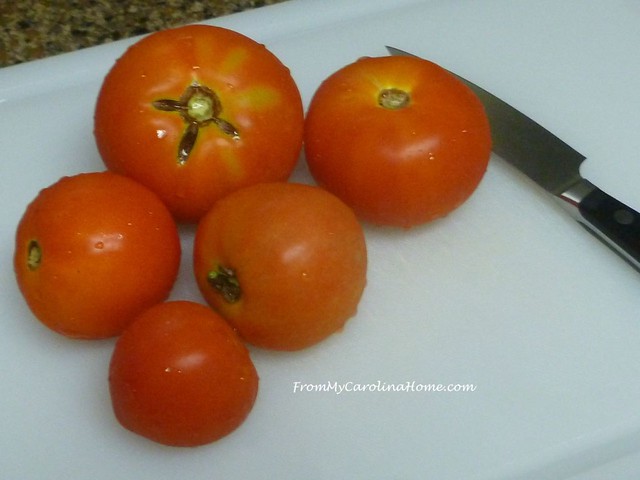 While reading a charming little book called Simple Pleasures of the Garden, I found a wonderful idea on preserving the last of the crop by drying and then storing in olive oil.  I looked up the idea in one of my other books on tomatoes, Bread, Tomato, Garlic Quick Cooking with 3 Main Ingredients, and found the procedure close to the same.  Naturally, I had to try it. 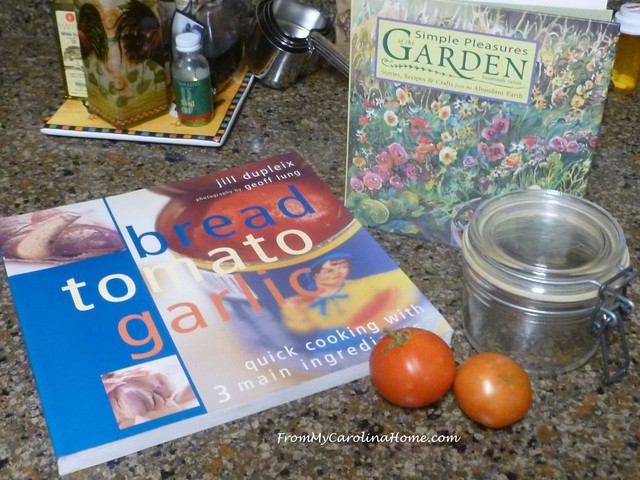 Begin with cutting the tomatoes, either in half for the smaller ones or in thirds if they were larger.  Remove the stem section. 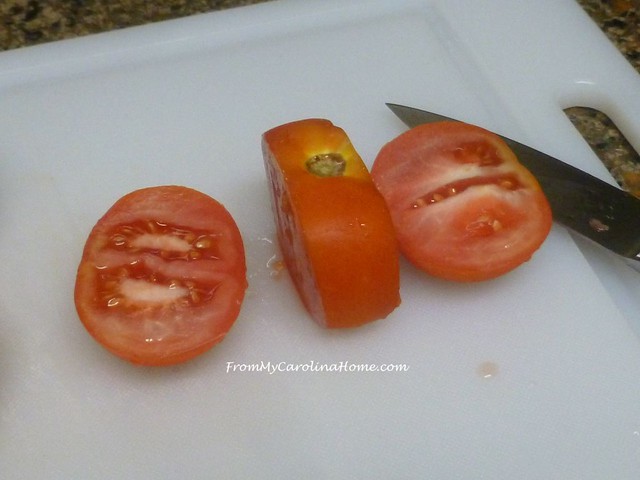 Leave the seeds and jelly as those have flavor. 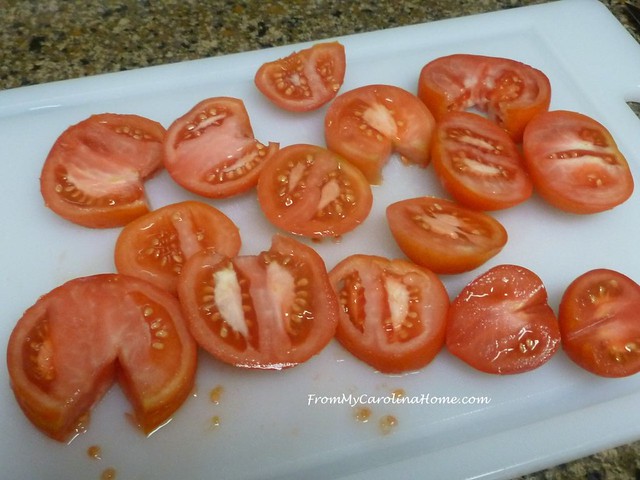 Put them on a rack over a pan sprayed with cooking spray to catch any drips. 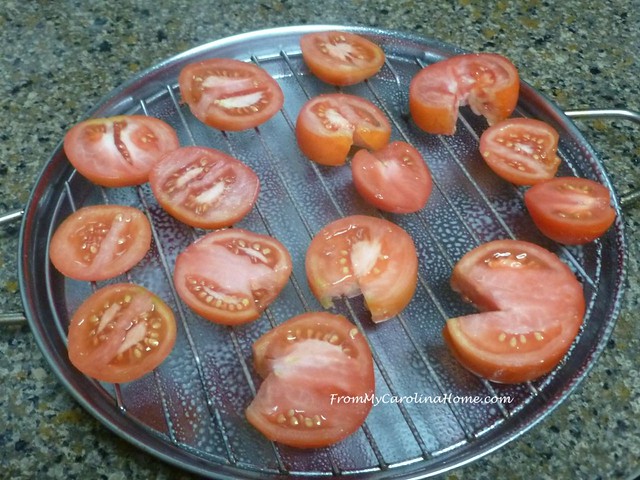 Bake in a 180ºF oven.  They were doing well after about 2 hours, but needed a lot more. 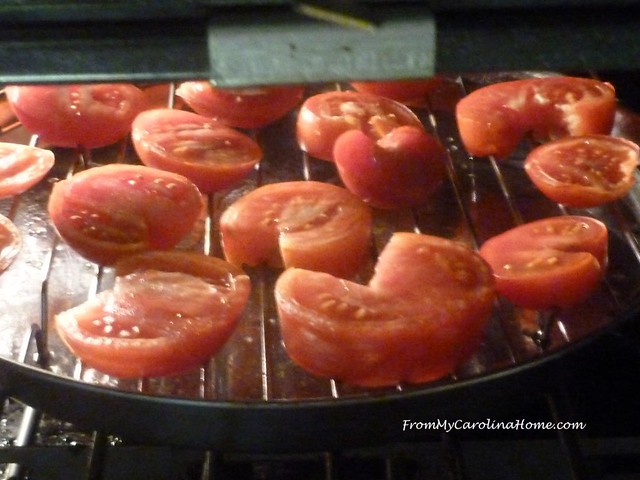 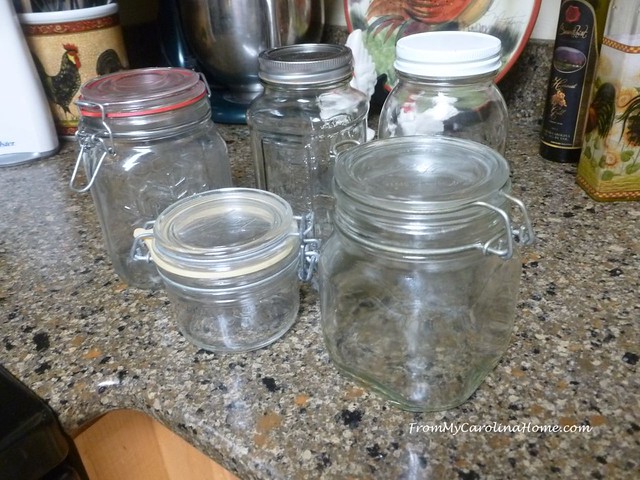 After six hours, the tomatoes were looking good.  I was running out of time, so this would have to do. 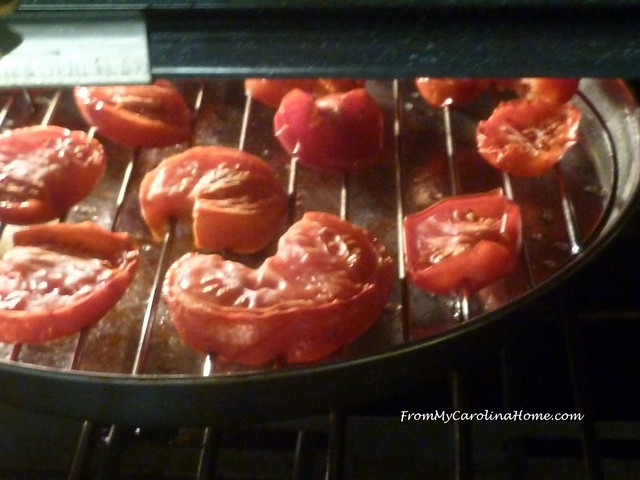 They are somewhat drier, but next time I’ll go at least 8 hours, or maybe overnight as one book suggests. 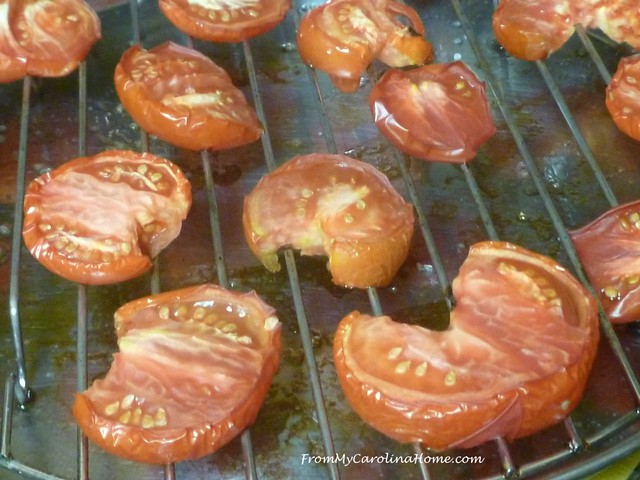 The tomatoes were packed in the jar, then pressed with a fork to remove any air while they were still hot. 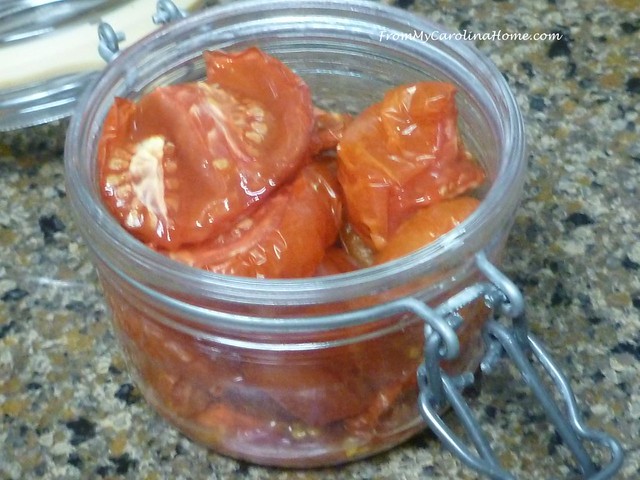 Add olive oil until the tomatoes are covered by about a quarter-inch of oil, and all the air spaces are gone.  Cover tightly.  The tomatoes will keep on the counter for about a week, or in the refrigerator for a couple of weeks. 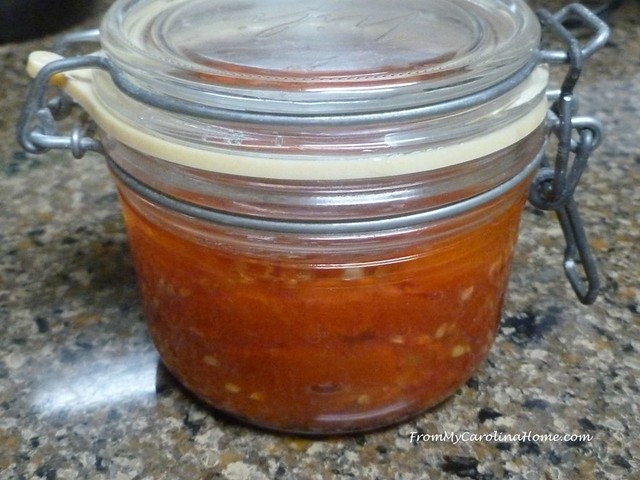 Naturally, I couldn’t stop there.  I gathered fresh parsley, basil and oregano from my garden to add to the tomatoes. 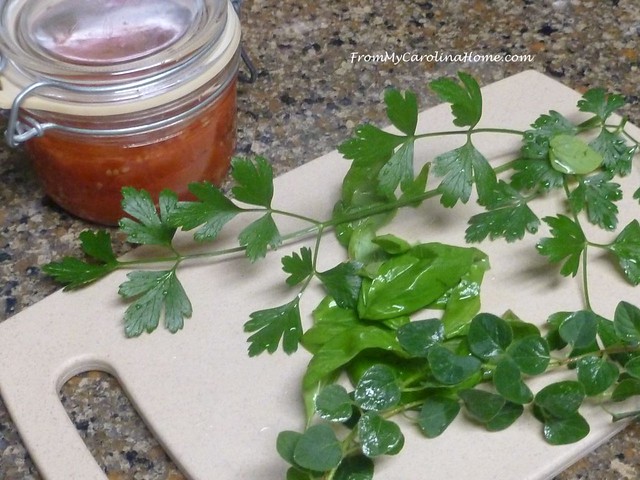 I chopped all the herbs together. 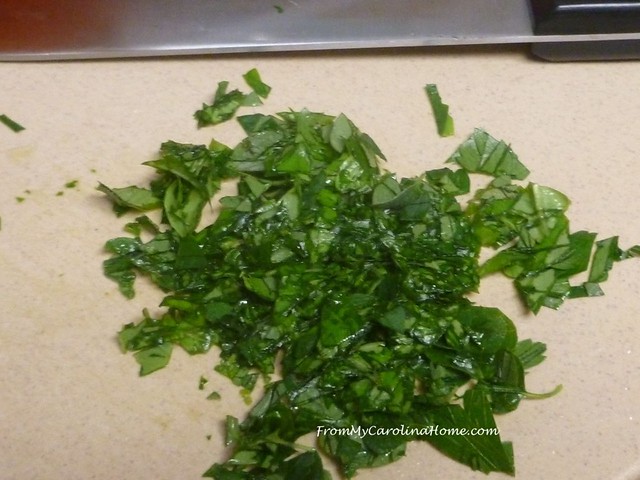 Then they were added to the tomatoes.  A bit more oil to cover them up again was needed.  Update and warning!!   Be absolutely sure that your tomatoes are well pressed and COMPLETELY covered with oil or they will grow hazardous bacteria in short order. 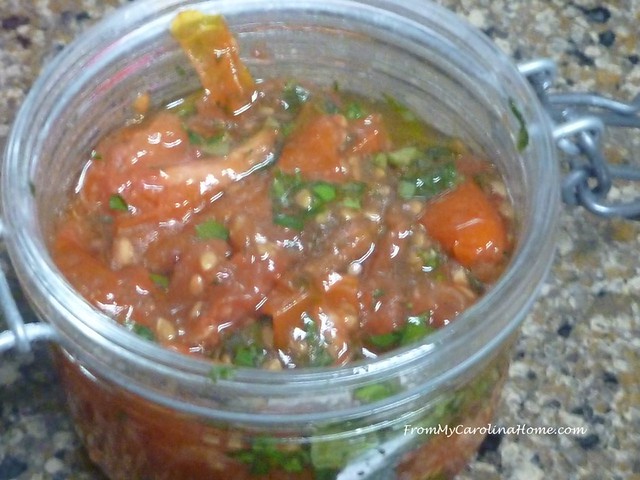 A few days later, I wanted to use them, and decided on a pizza.  I had a new idea for one, and these tomatoes were the perfect thing. The crust is a thin Boboli flatbread crust, and I brushed it lightly with olive oil and spread ricotta cheese on top. 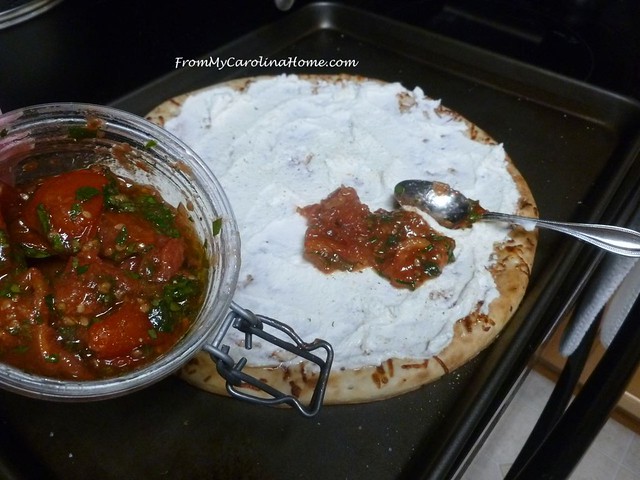 Then I spooned the tomato/herb sauce on top and spread them out. 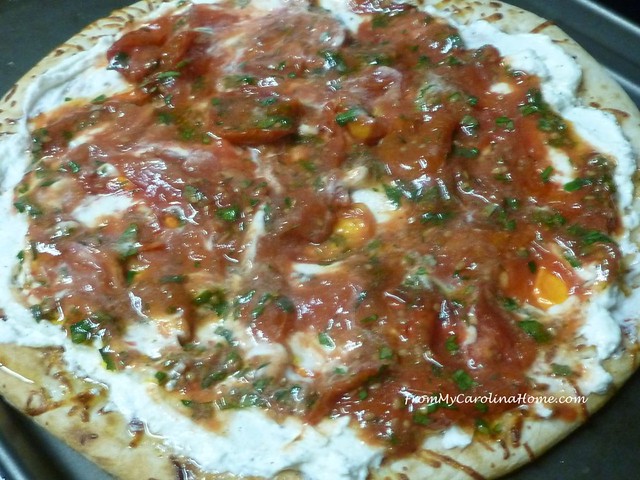 I topped the pizza with small cubes of fresh mozzarella, portabello mushrooms, cooked sausage and onions, and the last bit of a summer sausage finely diced. 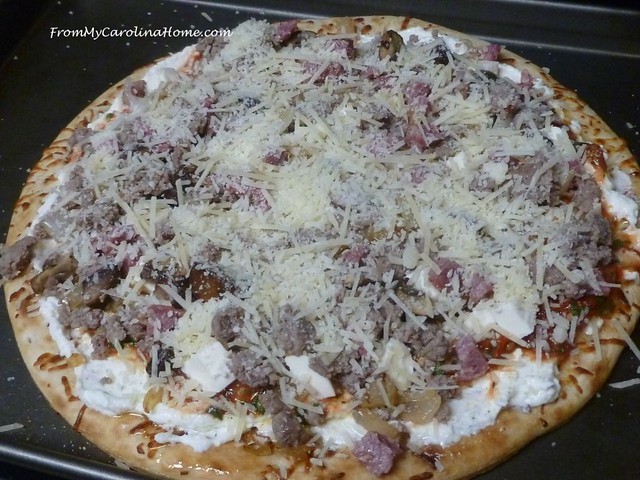 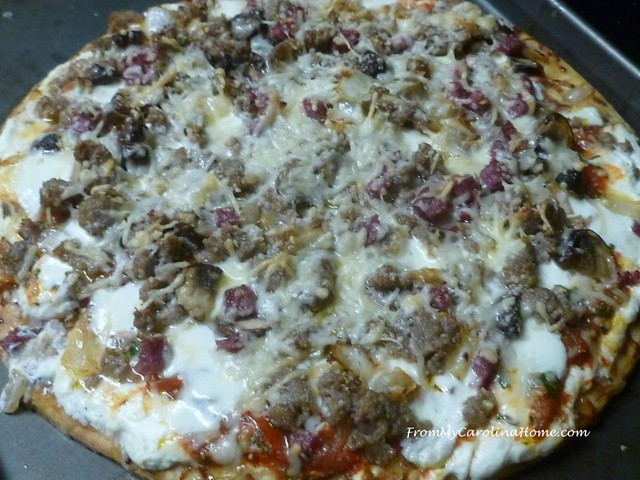 Yum!  Those tomatoes tasted so fresh with the flavor concentrated!  I have to say, that these tomatoes over the ricotta base was really delicious, and would work with any toppings.  Next time I think I’ll add spinach.  One more fresh tomato from my garden was served on the side salad for the meal. 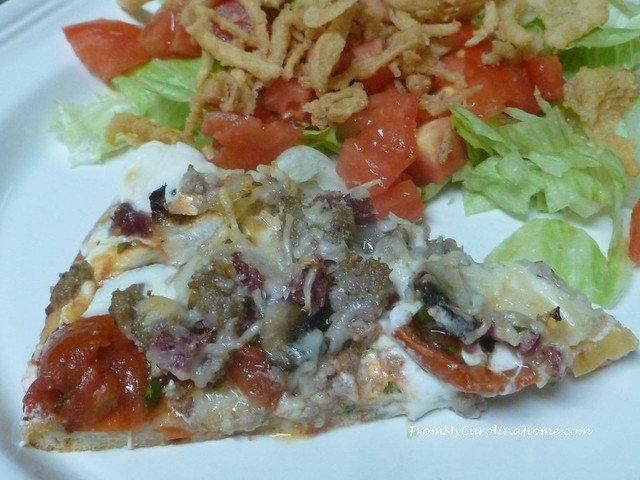 These were incredible, and I am definitely doing this again with just a couple of modifications. I’ll increase the oven to 200ºF (93ºC) and dry for at least 8 hours next time. 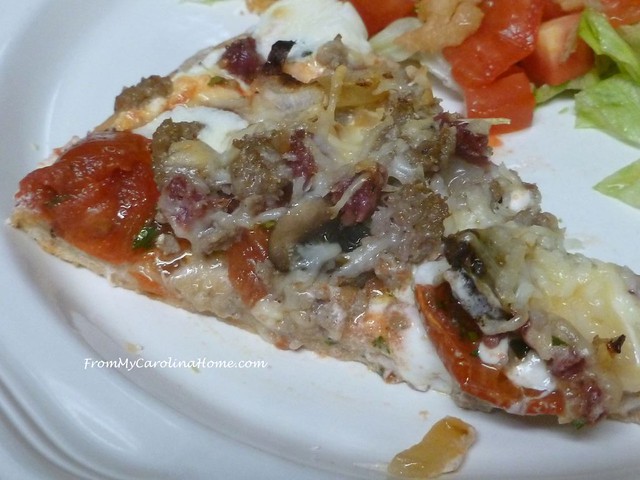 Have you dried tomatoes and preserved them in oil like this?  Do you think this is something you might try?  Do you still have tomatoes ripening in your garden?

Check out these books for more delicious ideas to use tomatoes –
Simple Pleasures of the Garden,
Bread, Tomato, Garlic Quick Cooking with 3 Main Ingredients,
The Good Cook’s Book of Tomatoes,
The Tomato Basket,
Tomatoes, Garlic, Basil Simple Pleasures of Growing and Cooking Your Garden’s Most Versatile Vegetable,
Tomatomania!: A Fresh Approach to Celebrating Tomatoes in the Garden and in the Kitchen and
The Heirloom Tomato: From Garden to Table: Recipes, Portraits, and History of the World’s Most Beautiful Fruit
(Amazon affiliate links)

19 thoughts on “End of the Garden Tomatoes”