Summer is definitely here!  The milder temperatures mean another car club outing.  We now belong to three clubs, so there is something to do almost every weekend!  Our Appalachian Mountain Minis club was joined by the Upstate Minis club from South Carolina for an outing last weekend.  We are members of both clubs.  It was a nice drive and a visit to a gem mine.  Meeting in south Asheville, we hopped onto the Blue Ridge Parkway. 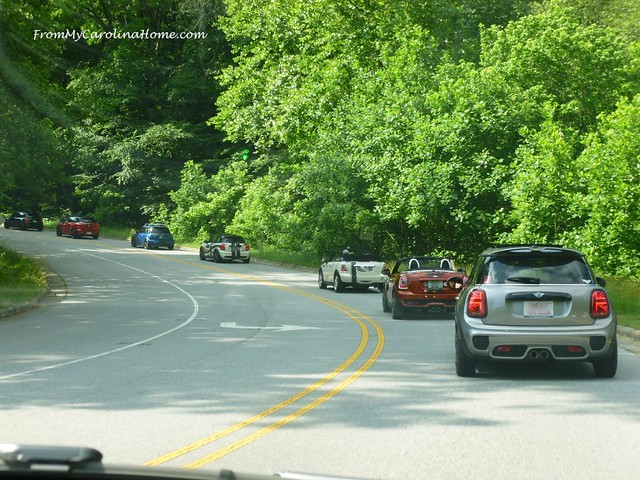 Minis in front and lots more behind. 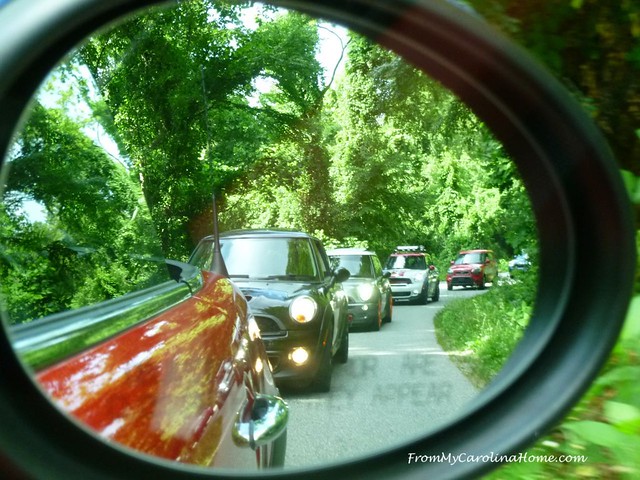 At one point, we blocked the lane so the whole group could make a left turn and stay together, so we were shuttled to the back of the line.  It made is easy to get a few more members in the photos. 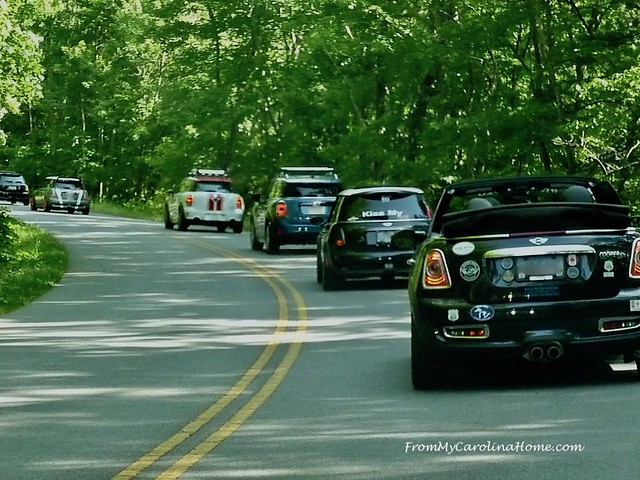 We drove north, and stopped at Craggy Bottom visitor center and overlook.  It was cool there, only 59 degrees by the time we got there, so I was happy that I had brought a sweater. 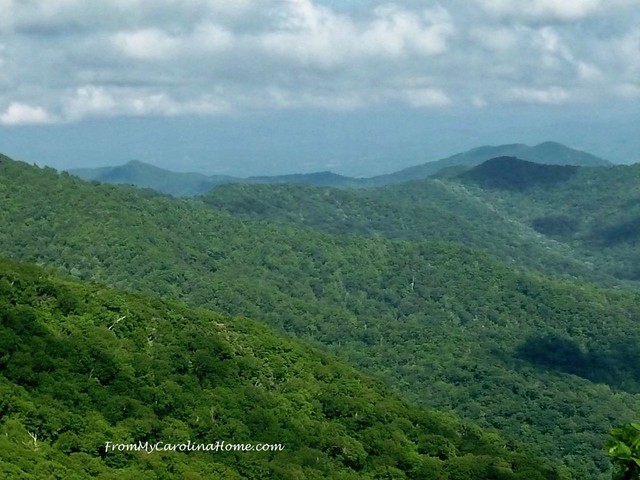 Pink rhododendrons were in bloom all over the parkway. 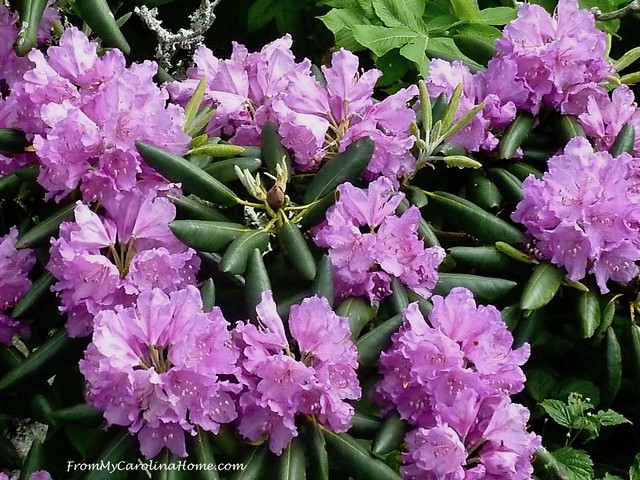 We had 32 Mini Coopers with the two clubs joining up.  Here we parked in two rows along the edge of the parking area to get everyone into the overlook without taking up any parking spaces. 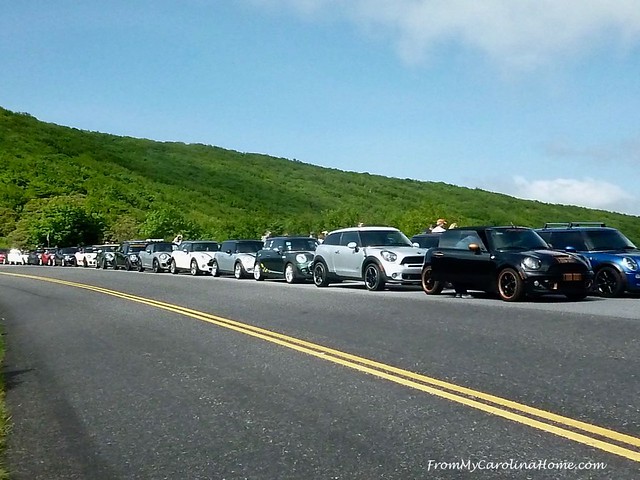 The overlook has a view of the Asheville resevoir, part of the watershed.  Layers of Blue Ridge mountains stretch into the distance. 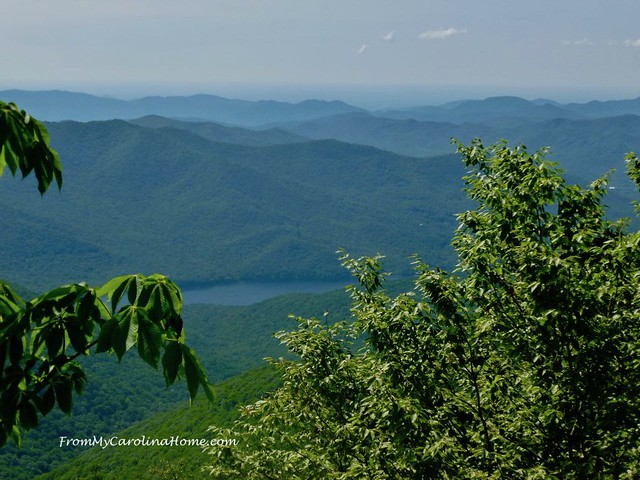 The partly cloudy day was perfect for riding with the top down. 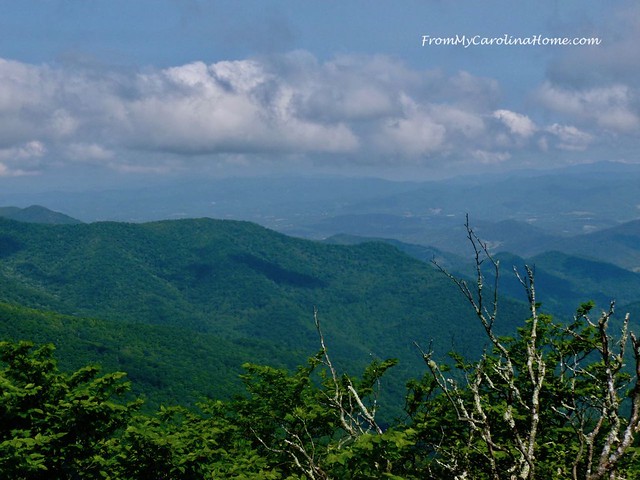 Off we went again, seeing a lot more rhododendrons on the side of the road. 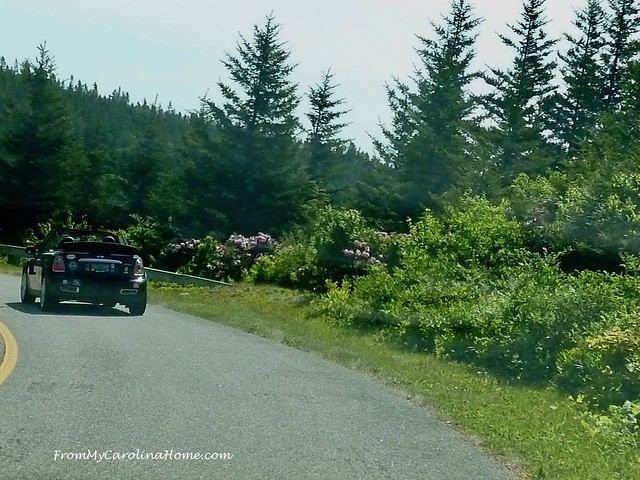 We had lunch at the Little Switzerland Inn, then went to the Emerald Village Gem Mine just a couple of miles away. 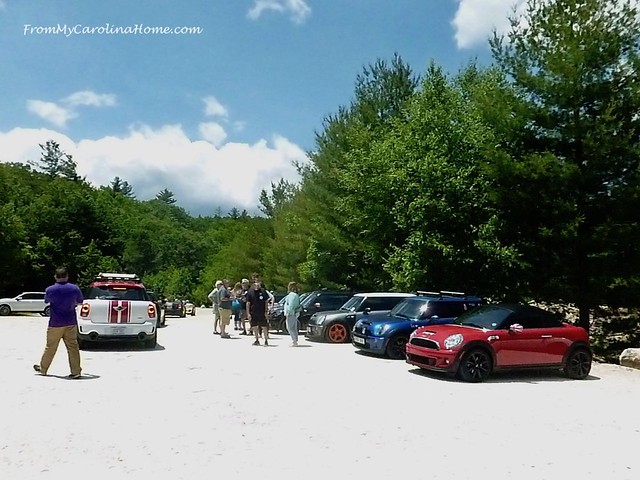 I have not done this before, but it was so fun.  We each got a bucket of rocks with sand.  You begin by dumping just a bit into your mesh bottom box. 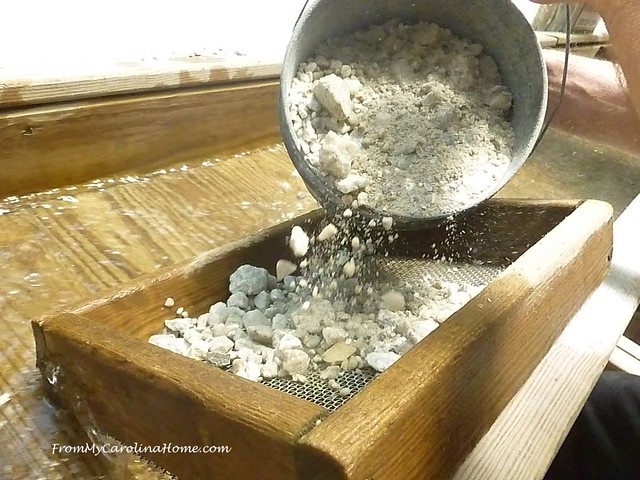 You can see, there are some nice color rocks just waiting to be discovered. 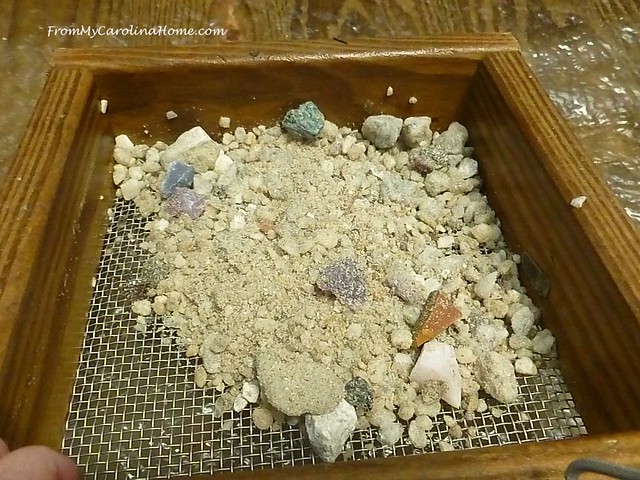 Dip the box into the flume of water and swish around to wash away the dirt and sand. 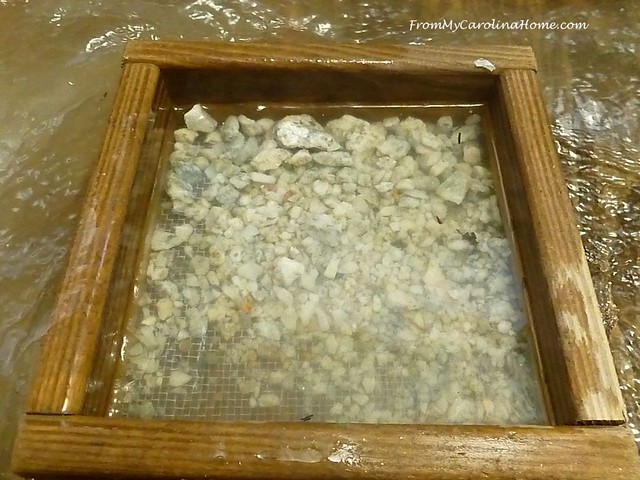 Bringing it up, you can then pick through the rocks and keep what you find.  It took seven or eight boxfuls to empty the bucket.  I found rose quartz, some crystals, several blue and green pieces and I think maybe a citrine. 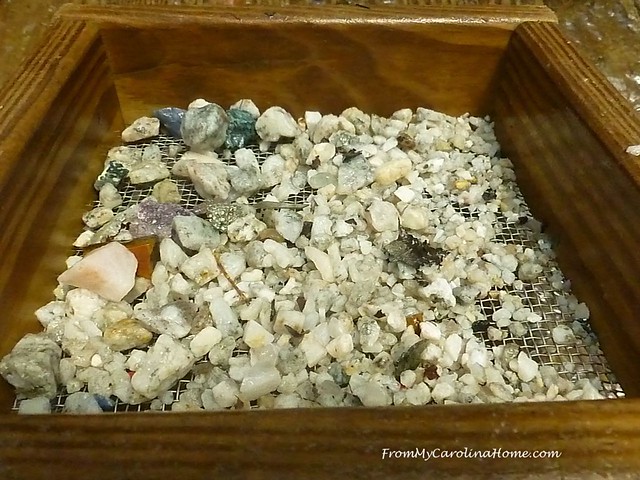 We then went over to the exhibits area, and poked around the replica county store. 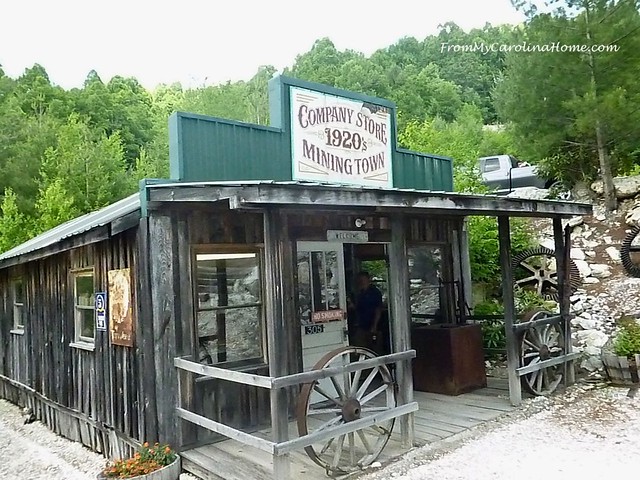 There is a museum with lots of history to learn about mining in the past. 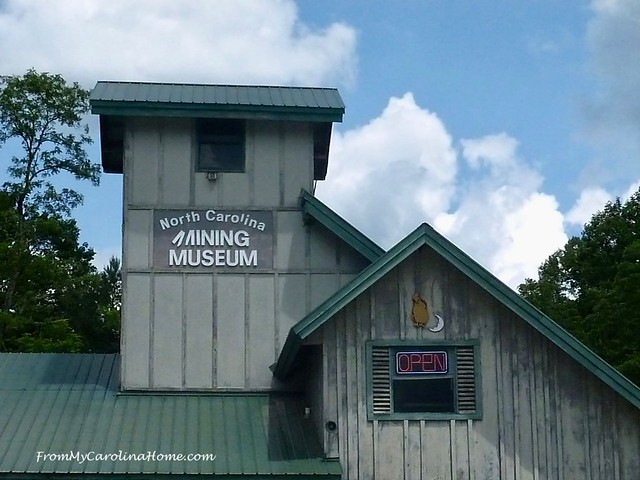 This was a working mine for many years.  It was the primary mine for feldspar beginning in the 1924, mined by the Bon Ami company for use in its cleanser.  Today, feldspar is mined at another mine in NC for the soft scrub still sold today. 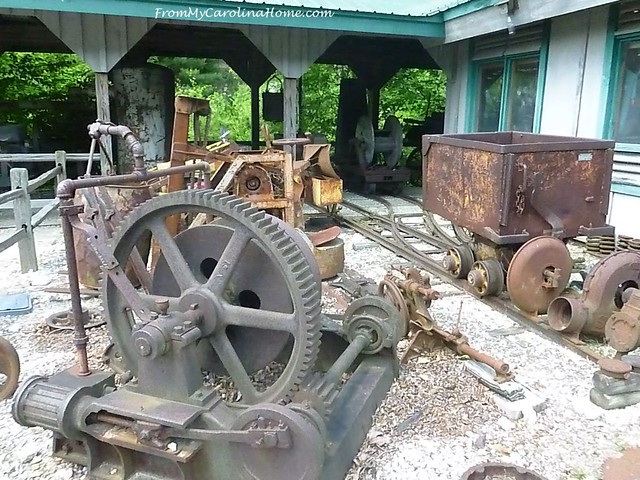 The old equipment like this little dozer is no longer used. 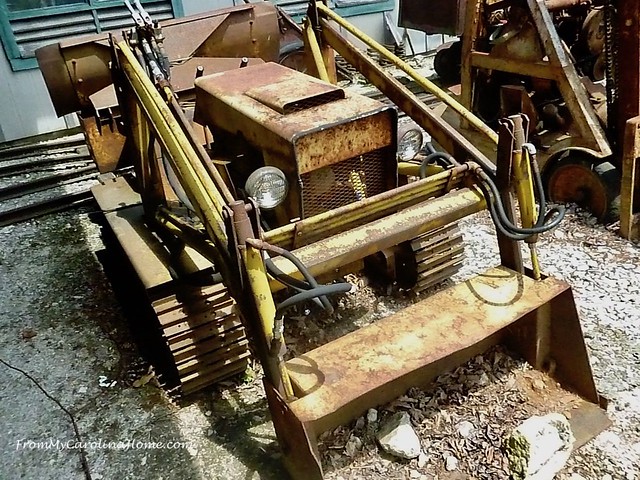 More old equipment and tools were on display. 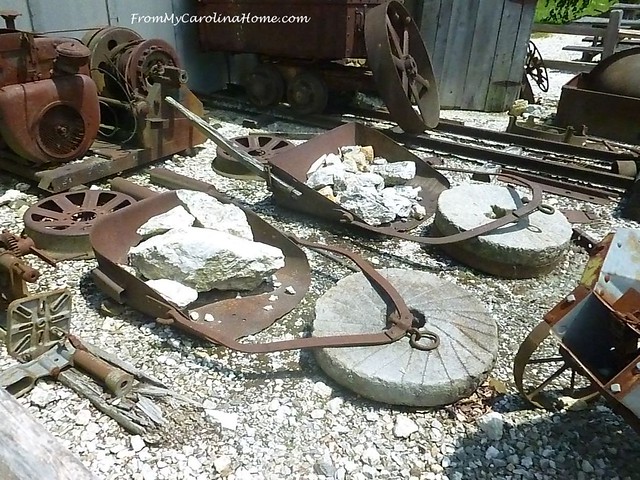 A very old dump truck was on the side of the museum. 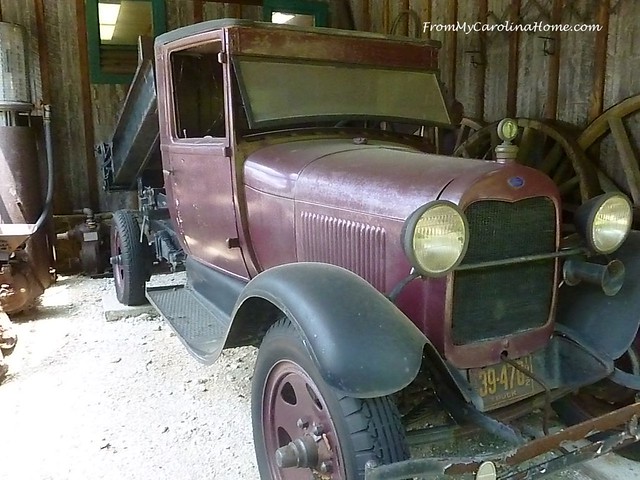 Inside were shelves full of old items like lanterns and oil lamps. 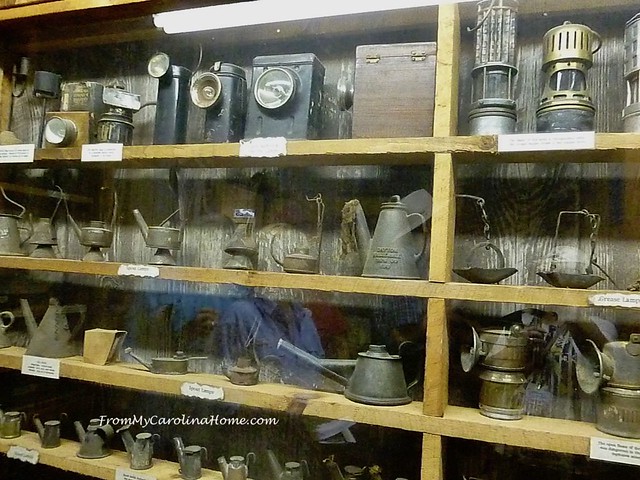 This balance scale was beautiful, and carefully preserved in glass.  It was used to weigh gold. 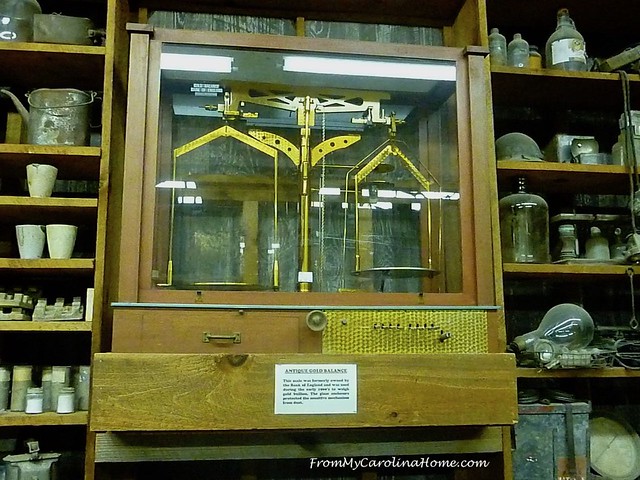 Going outside, the Bon Ami waterfall has displays of old equipment rusting in front of it. 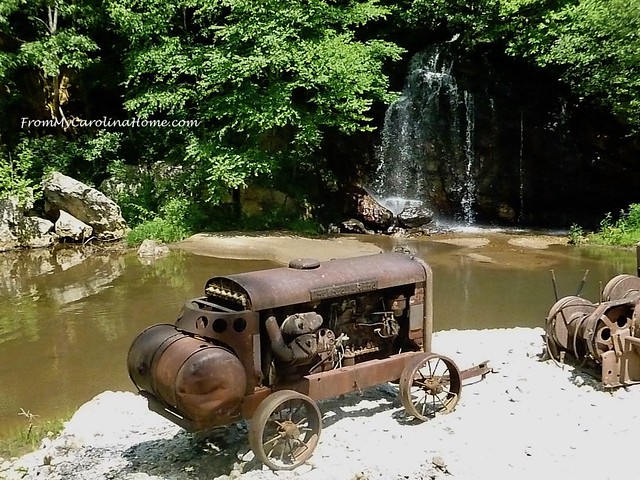 This old steam engine was used to run pumps, drills and belt driven equipment.  They say it still runs today, but I wasn’t sure about that given the rust. 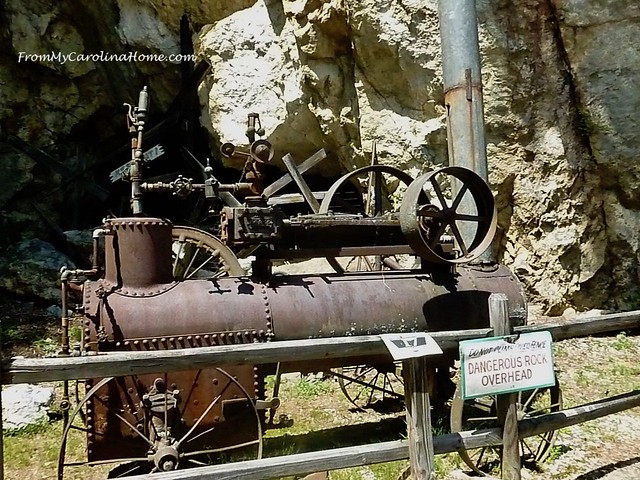 Inside the mine itself, you could look overhead to see the veins of various ores.  There were also displays and historical photos set up to learn more. 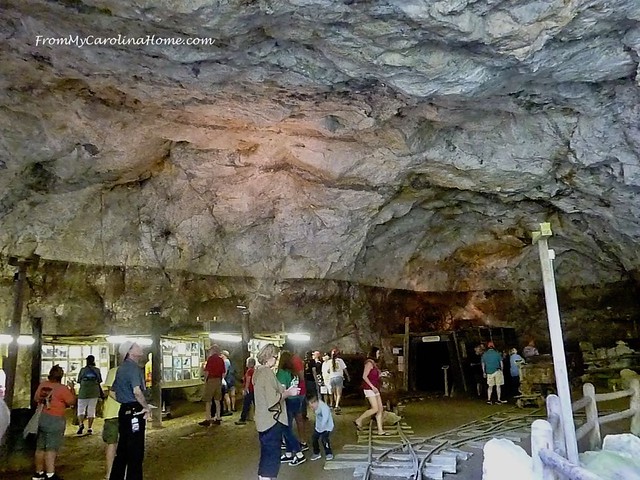 After the tour, about half the group formed up again to drive another twisty and scenic road in NC called Diamondback. 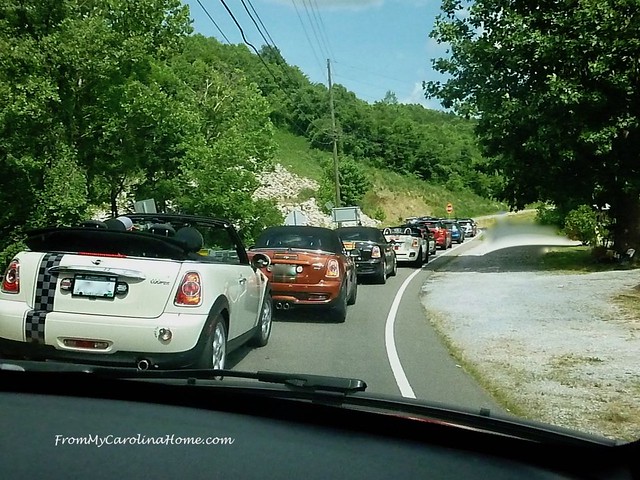 It is beautiful, lush and green all the way. 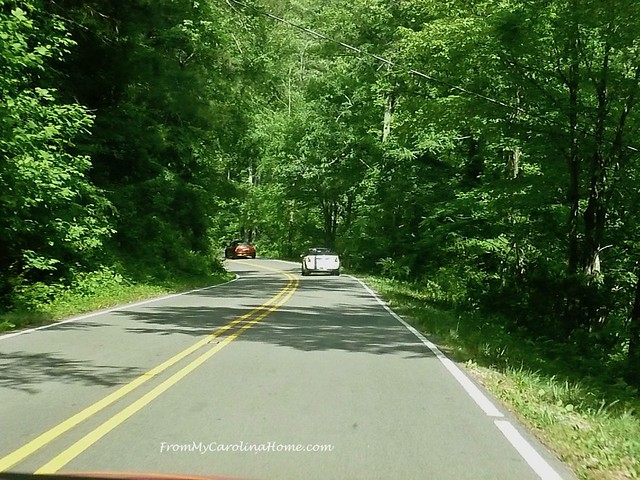 Coming down into Marion, we were headed to Jack Frost Dairy Bar to get some ice cream. 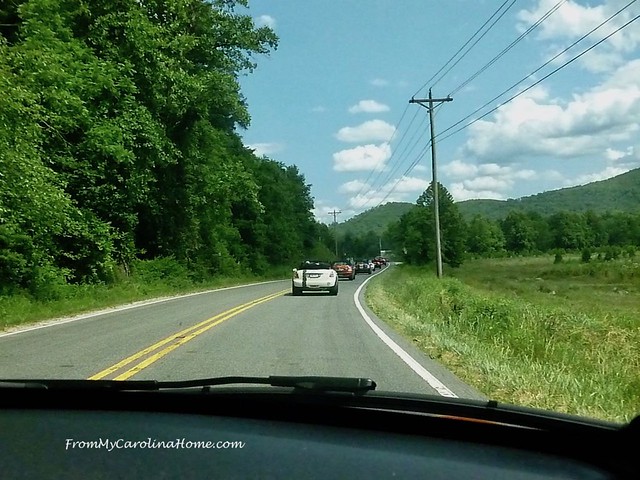 At home, I put our rocks out with the identification chart we were given to see what we had.  No emeralds, but lots of pretty quartz. 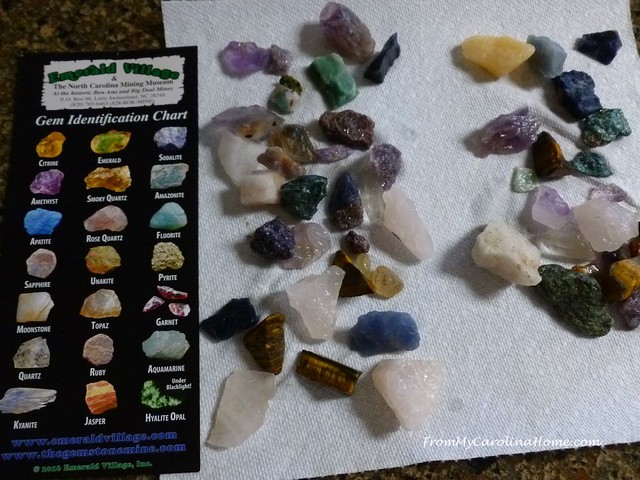 I piled all of them into a glass bowl for display.  It made a different kind of souvenir for a fun day. 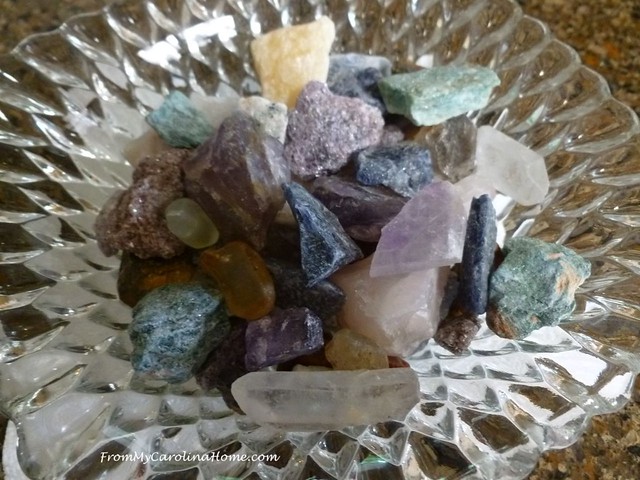 Have you ever visited a gem mine?

Sharing at Take Me Away!

26 thoughts on “Visiting a Gem Mine and Driving Diamondback”