Over the past month, it seems like the rain and the cold was never going to end.   The bird visitors have been fun to watch, with the variety of birds in colorful plumage all making short work of the seed.  DH has had to fill it up a couple of times a week.  Several bluebirds have stayed all winter.  On this day, a nuthatch hangs off the bottom of the suet feeder while the bluebird stuff his beak.  Funny little guys, they like to eat upside down.  They really took advantage of the suet during the coldest days. 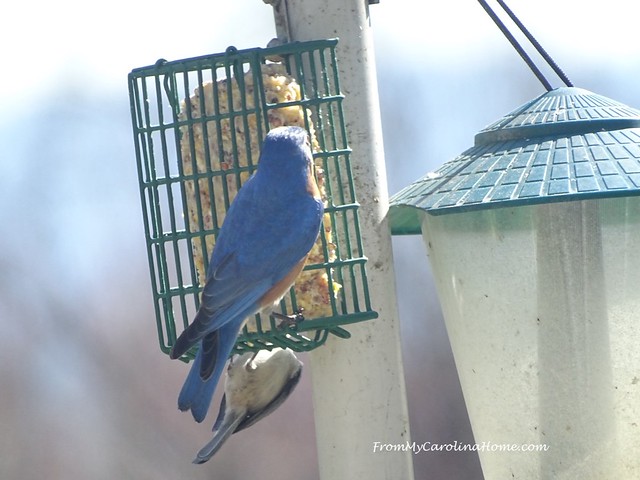 Clarence made several visits to beg a bite of whole grain bread, this time bringing a buddy with him.  His turkey friend was a bit skittish, and wouldn’t come up to get a morsel, so Clarence got the whole piece. 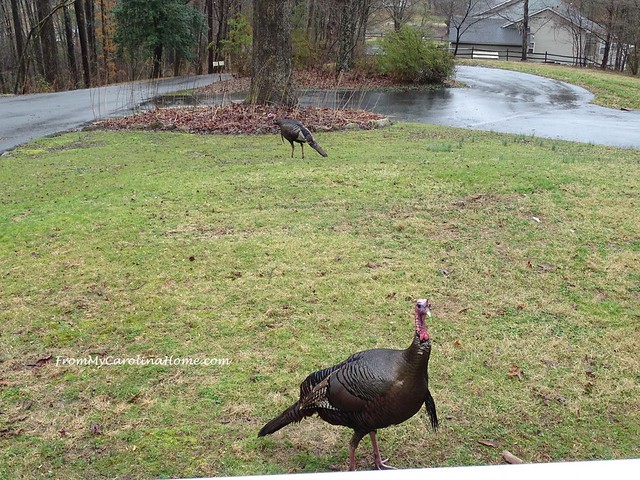 When it began sleeting one evening, this pair of Carolina wrens were snuggled together under the eve of the veranda. 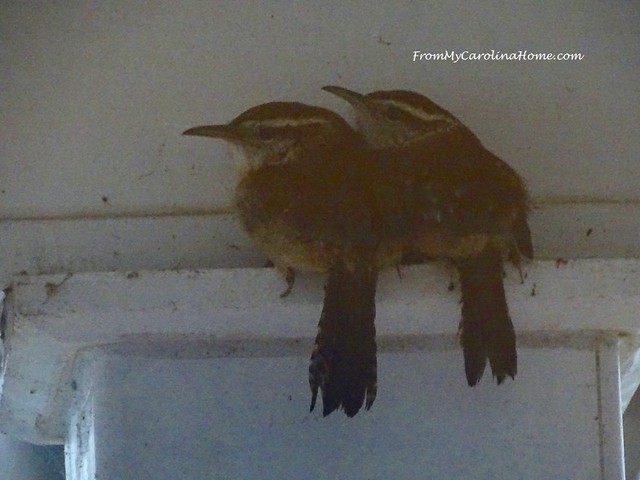 But then, a glorious day when the sun came out.  A flock of robins came to the yard and meadow, there must have been two dozen of them.  Of course, when I eased out on the veranda to take their picture, they all flew off.  But later they came back, so I tried to get them from inside through the rails. 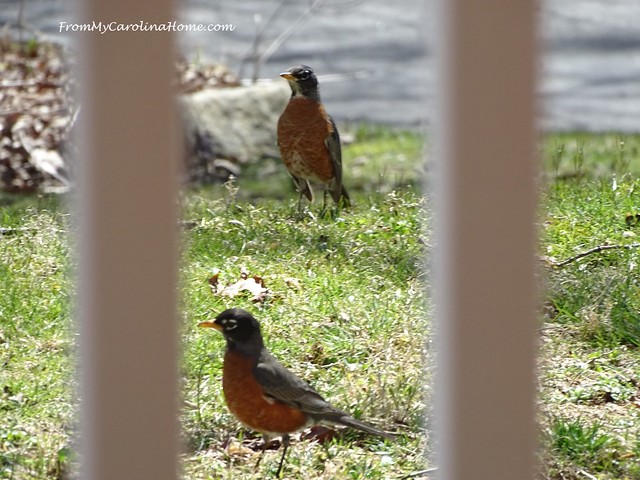 There was no way to get them all at once, they were all over the place. 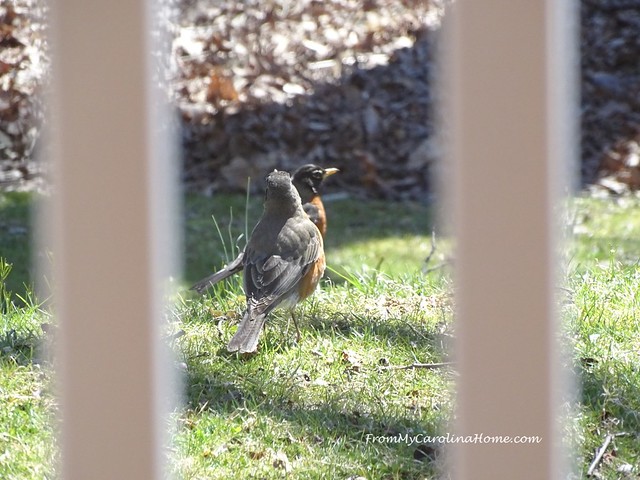 Up on the feeder, a titmouse rests after stuffing his beak. 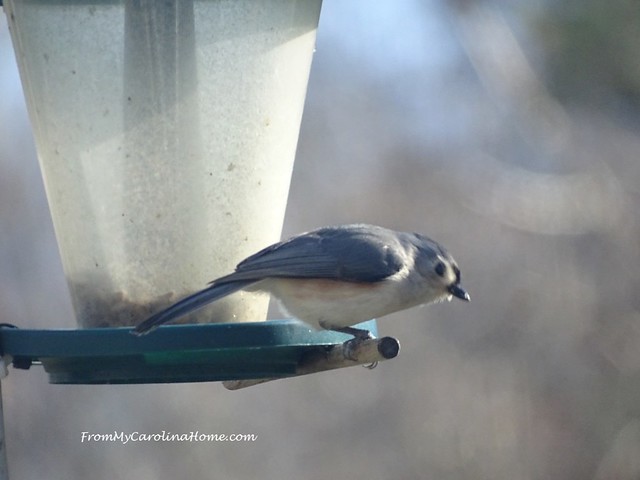 A little chickadee stopped by for a meal. 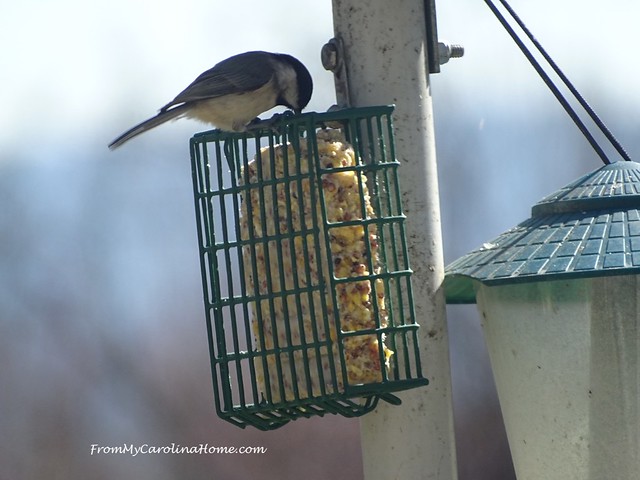 Another rainy day, and I looked out the kitchen window to see a flock of turkeys in the lower meadow.  I thought it was the flock of ladies that had come by last fall.  So, of course, I grabbed some whole grain bread and went out to the veranda.  Yep,  those girls came running!! 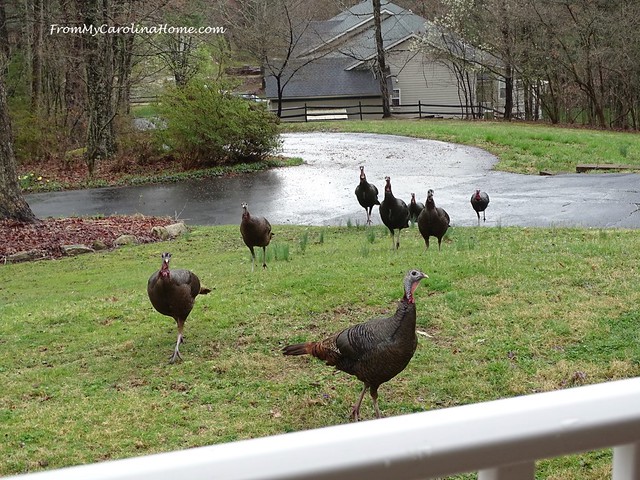 Looking closer, I realized that four of them were males.  They must have been juveniles last year without their beards yet.  So, I had seven females and four males, not eleven females.  One was on the driveway, and refused to come up for a group picture. 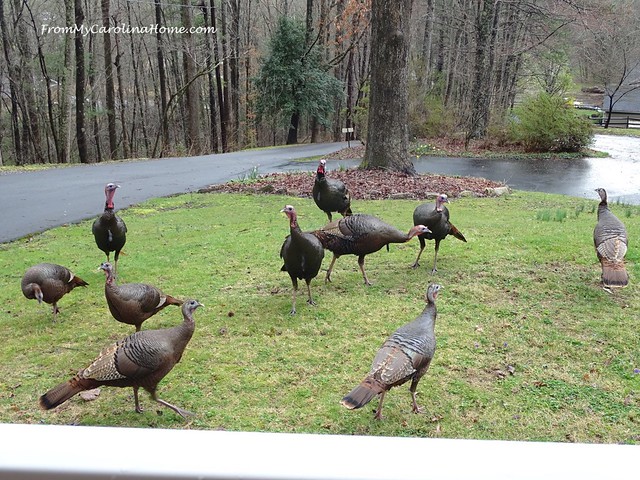 It was fun to try to get a bite to each one, as they all went for every bite thrown out.  So I threw one to the right and one to the left, down the middle, as far as I could throw, and started over as fast as I could, trying to be sure everyone at least got one bite. 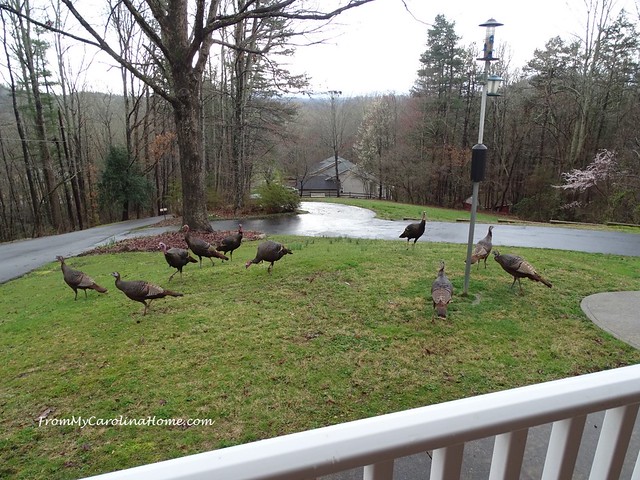 Looks like the goldfinches are starting to brighten up for spring with their summer color. 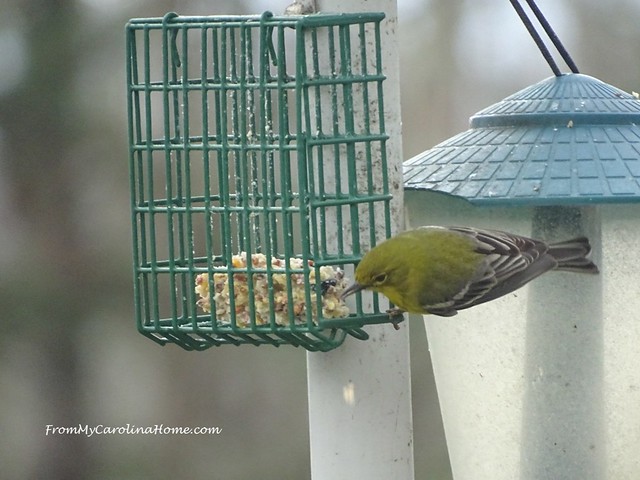 DH likes this woodpecker, who comes by often with his mate. 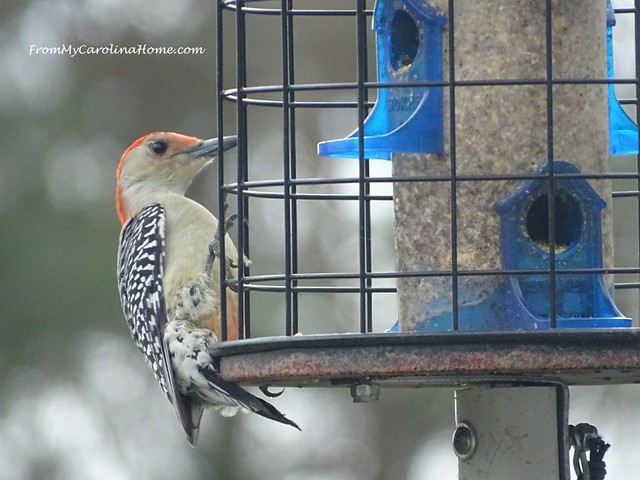 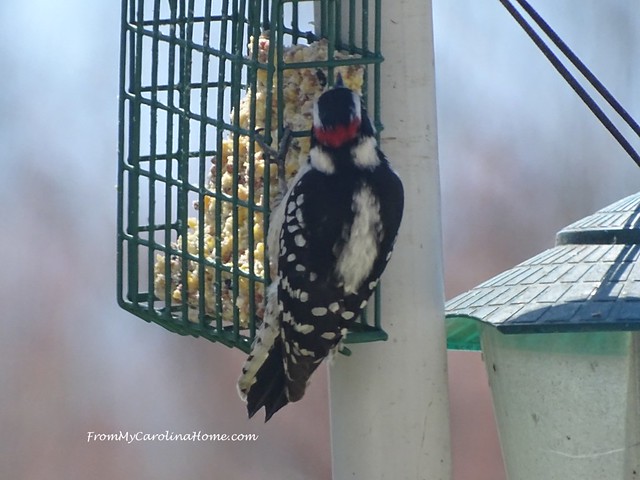 His mate comes by with him, and they take turns on the suet. 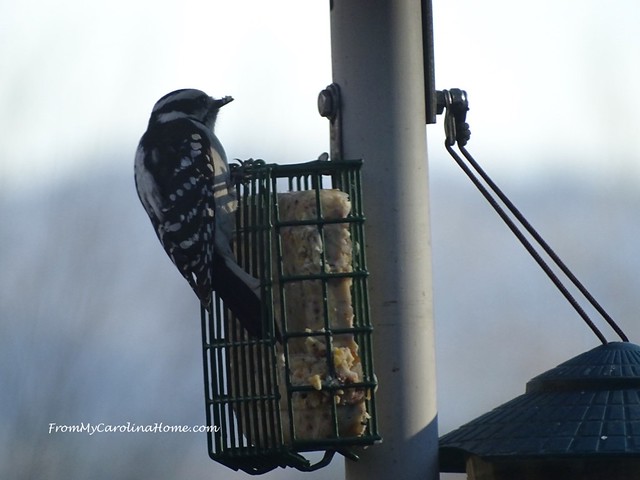 Ground feeding juncos have been regular visitors too, getting the seeds and suet dropped from the feeder above. 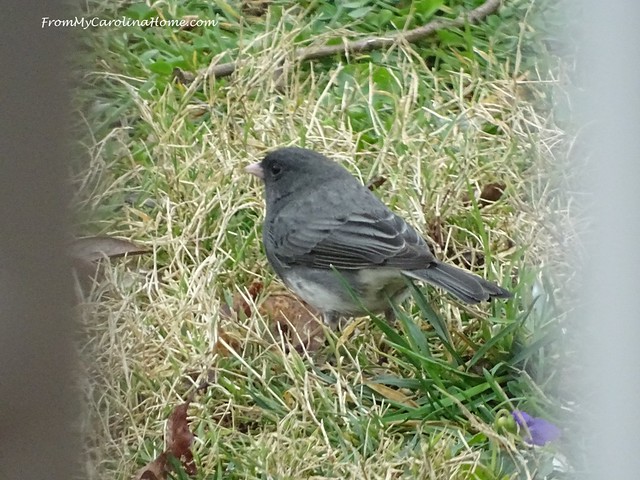 A pair of towhees come for the bounty, this is the male. The female has the same wing markings and orange sides but is brown on top instead of black. 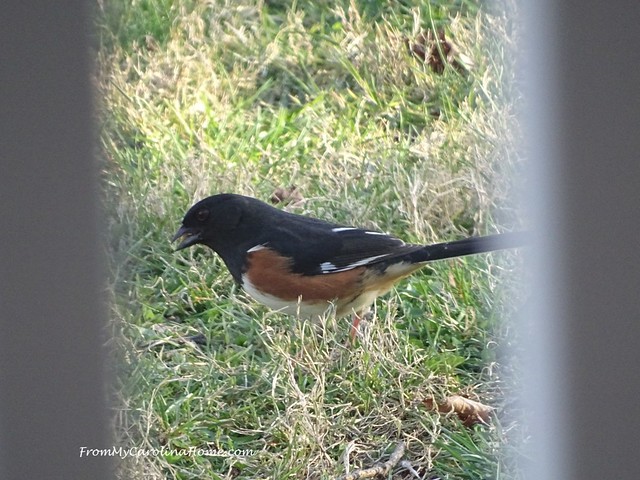 A whole family of chickadees came by this day, taking their turn with the other pretty birds. 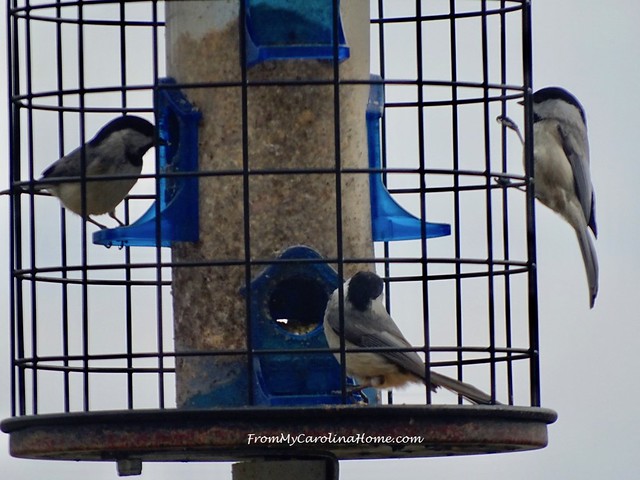 Just this week, I saw a Red-bellied Woodpecker (Thanks, Wendy, I should have looked closer!) 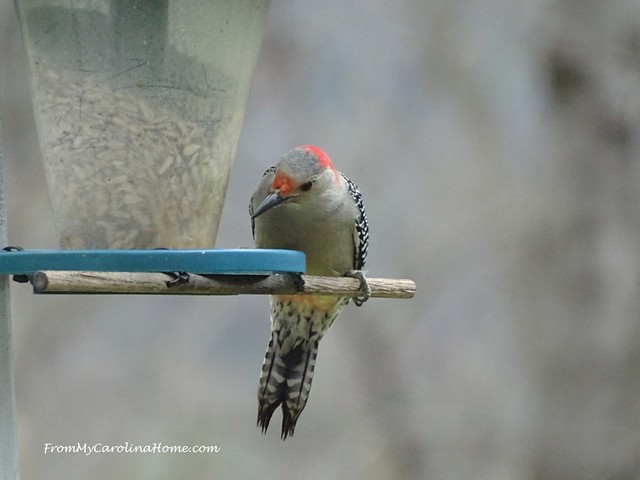 Then a new visitor came to sample our offerings.  This is a yellow bellied sap sucker, the first one I have seen at the feeder. 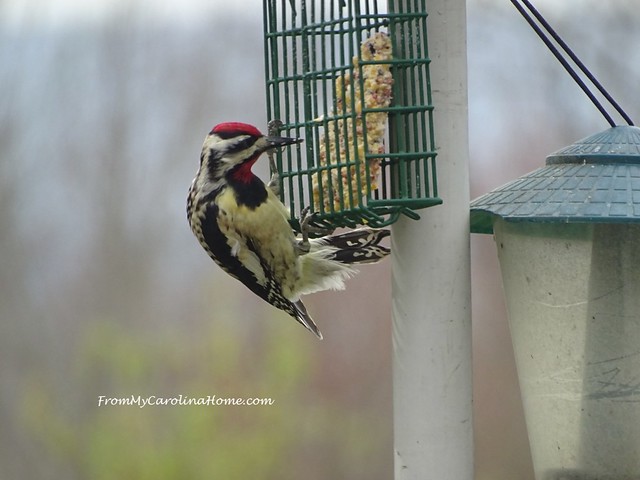 The red under his beak is what made me notice him, and look him up. The yellow color on his breast is subtle, but more apparent when you know what to look for. 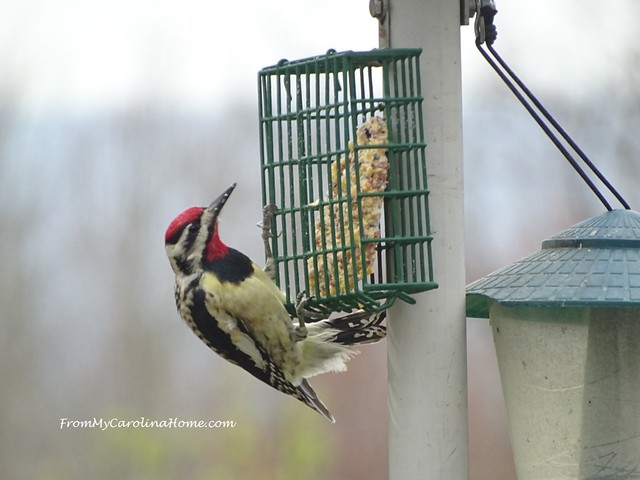 He was also willing to share the suet with a chickadee. 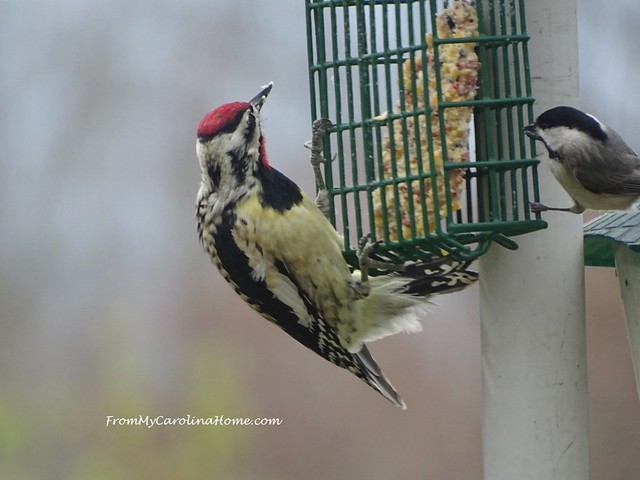 Just yesterday I saw a purple finch at the feeder for the first time this spring. 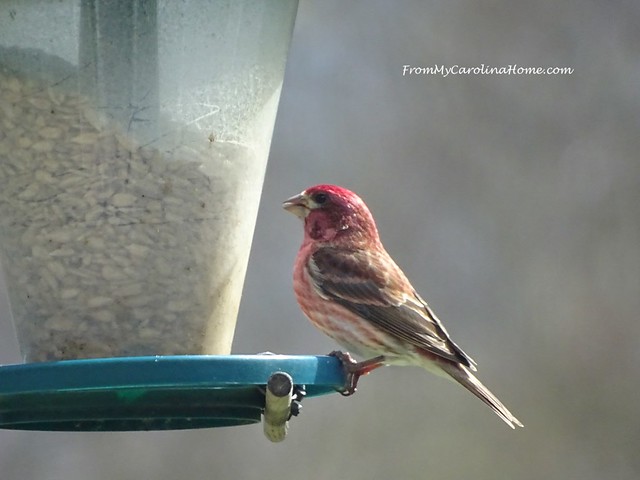 A pair of cardinals, and four blue jays are also regular visitors now too. Who is at your feeder now?

28 thoughts on “Birdwatching at Our Mountain Home”