Last year, I repaired a Severely Damaged Quilt, showing the steps of that repair on the blog.  I thought that would be the most damaged quilt I would ever see, but I was wrong.  Get ready for a very picture heavy post!!  This one was my biggest challenge yet! 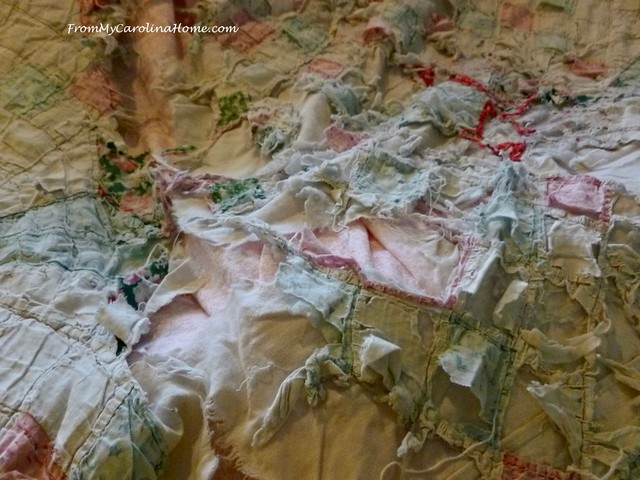 Large holes were in several places that went all the way through the quilt.  The pink you see underneath the white fabric is actually the new fabric that will become a new backing. 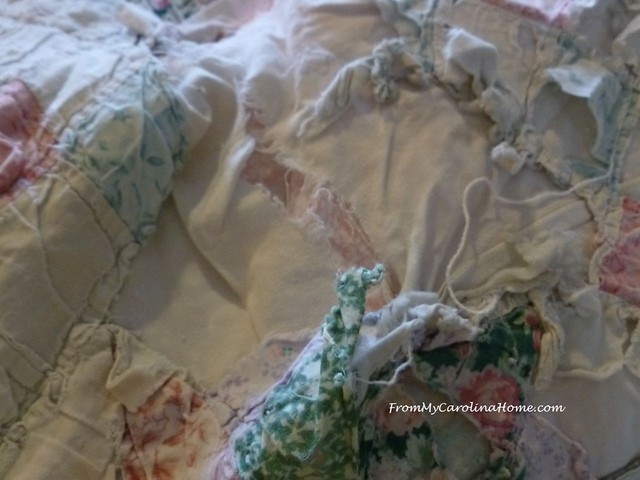 In places the backing was intact, but the top was just shredded and the batting was gone. 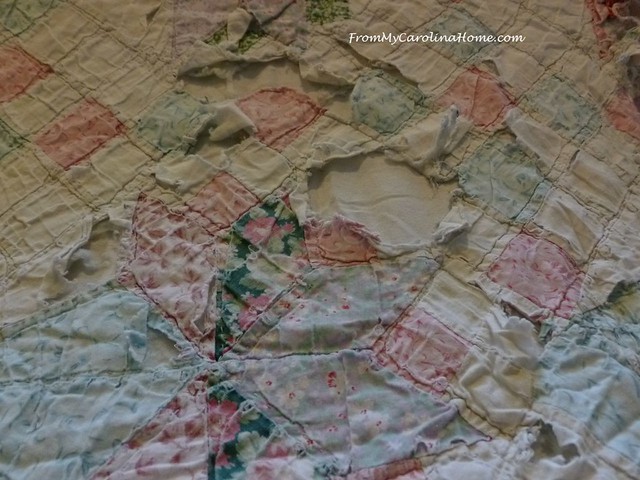 Along the edge, rips and tears were separating the pointed edge from the body of the quilt. 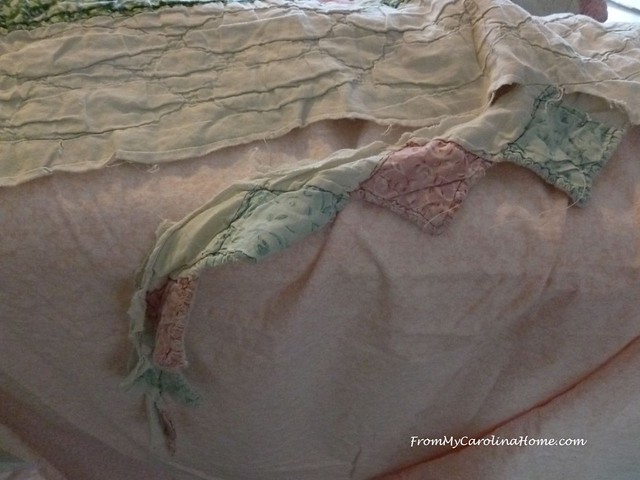 The largest hole was three feet in width, and 18 inches along the ripped left edge.  The top below the rip is shredded too. 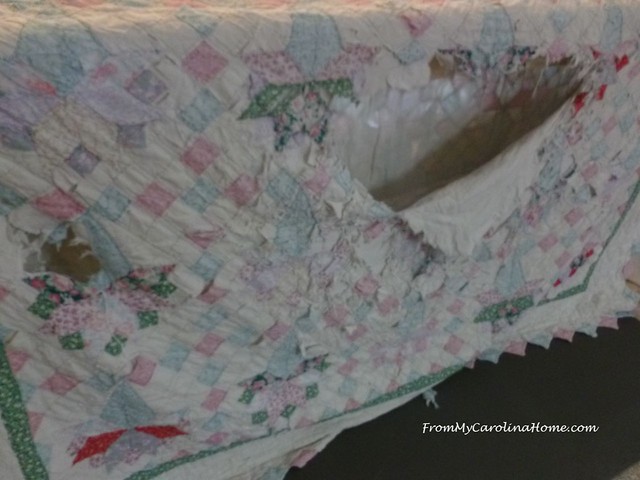 With the permission of the owner, the plan was to remove the edge all the way around and use that fabric to create patches for the center, then bind with new fabric. 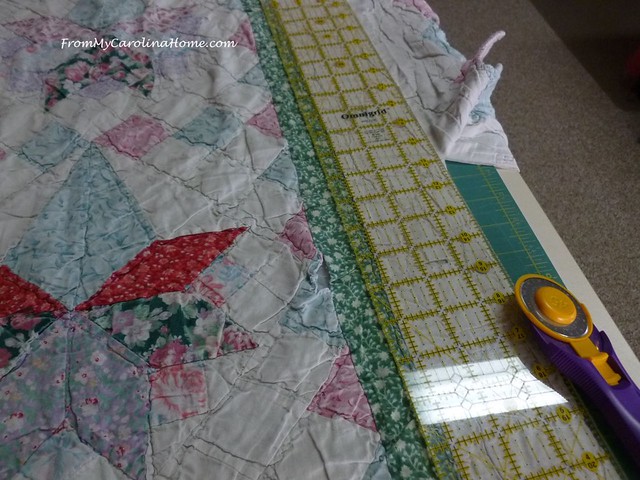 Some of the border was just not useable, but I took the intact points for the center section.  I separated the top from the backing in the cut-off sections so I would have double the amount of fabric for patches, and I needed every bit I could get. 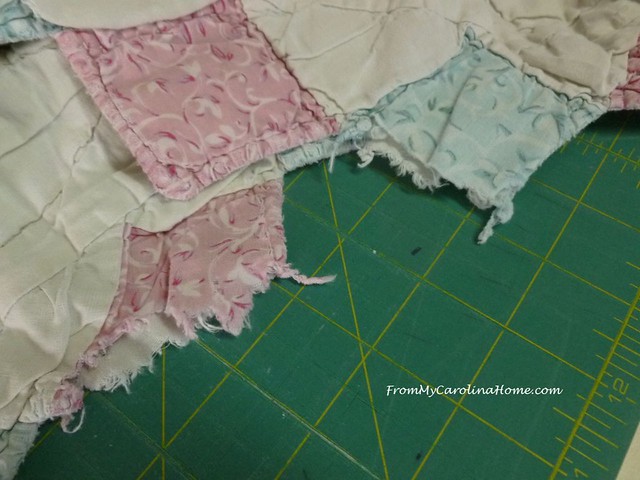 I loaded the new pink backing onto the longarm, and lay the quilt on top, using the upper bar to roll the quilt.  I rarely use that bar, but in this case it was needed to keep the quilt from hanging and having that weight pull on the section I was working on.  The customer decided not to add batting as she wanted it to stay thin and soft. 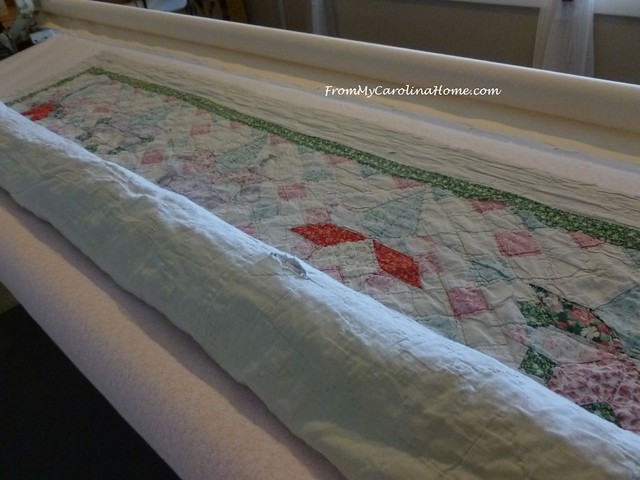 Pinning the sections that had enough fabric to fold over, I then sewed these areas closed by topstitching with the longarm. 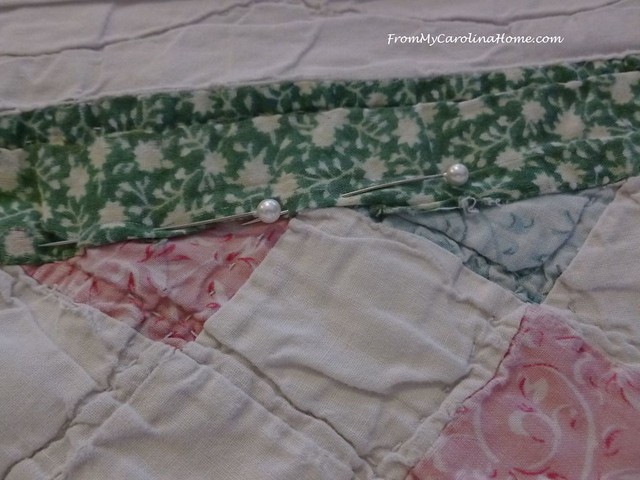 Dozens of these little patches were placed over holes in the top. 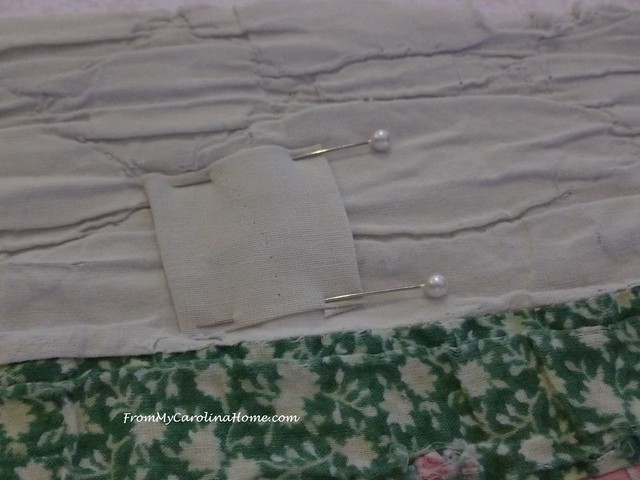 In some areas where the fabric was too damaged to fold over, I stitched the edges down before putting a patch on top. 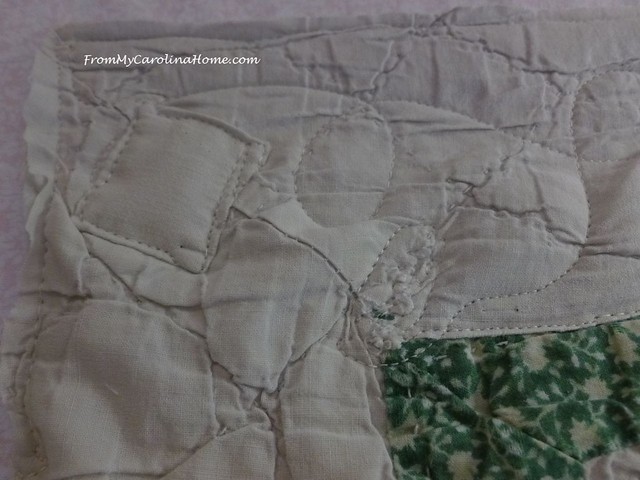 As I worked my way down the quilt, the damage was worse. 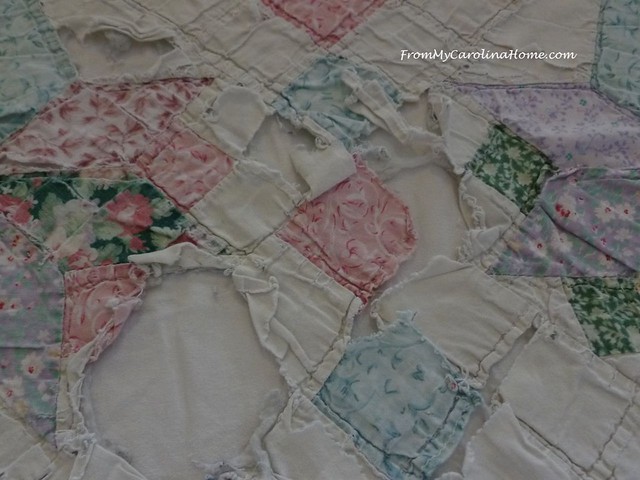 Using the iron, I pressed out the rolled up edges, pinning as I went in order to topstitch. 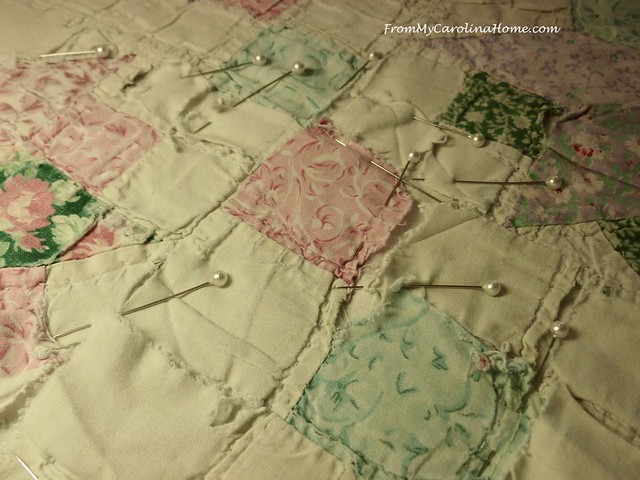 Then those areas were covered with patches.  Using the color squares from the edge made the patch look not so much like a big white area. 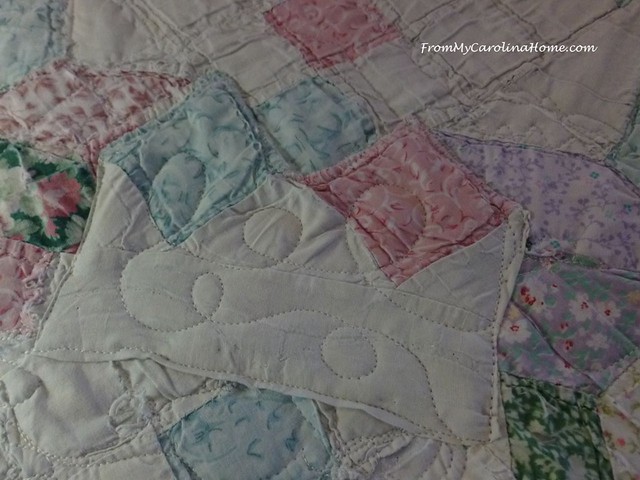 But the size was limited by the small amount cut off of the edge, so I added more patches, butting them together to cover holes. 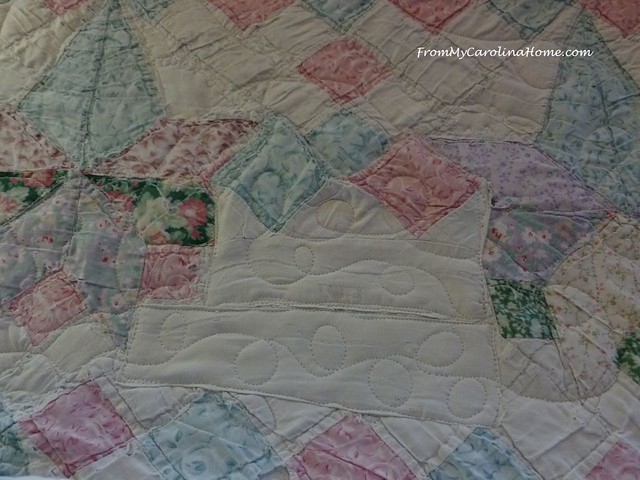 And then I got to the top edge of the largest hole in the center.  Once again, I ironed the rolled edges as flat as I could.  In the empty spaces, I used some of the batting from the edge to fill in. 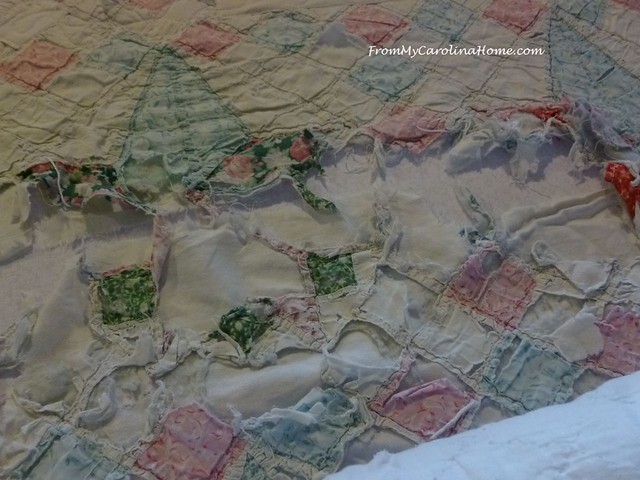 Using several edge pieces together, I made a very large patch, again butting the pieces up to each other to cover the space.  Pins hold them in place. 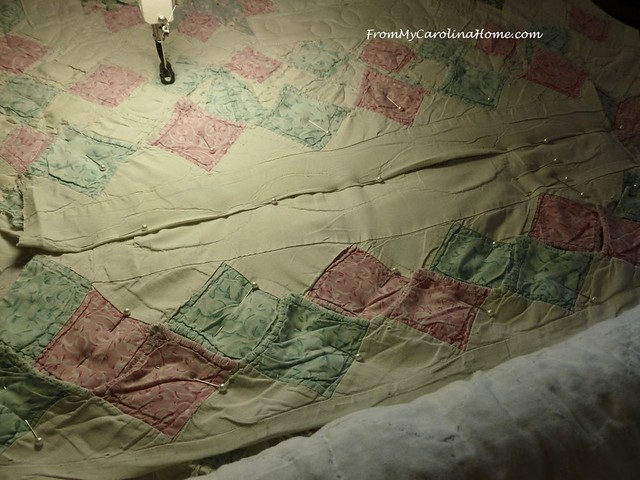 I quilted over the patches after topstitching the edges. 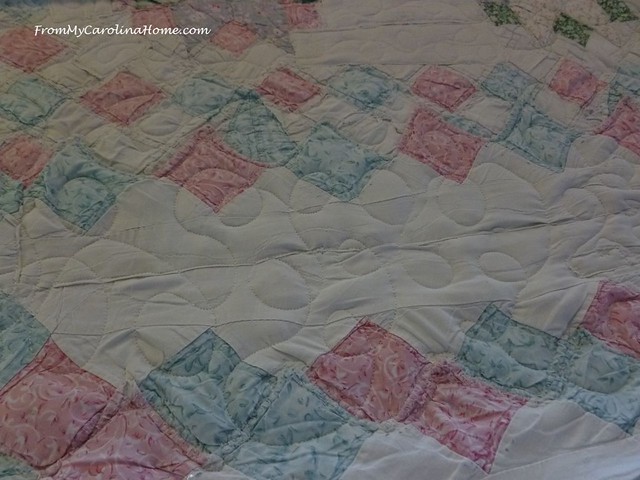 Then I rolled the quilt up to get to the next section, and repeated the process again. 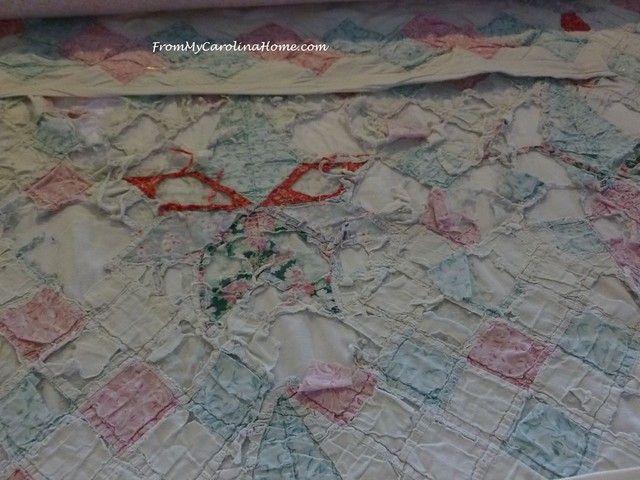 Lots of patches and lots of pins were used. 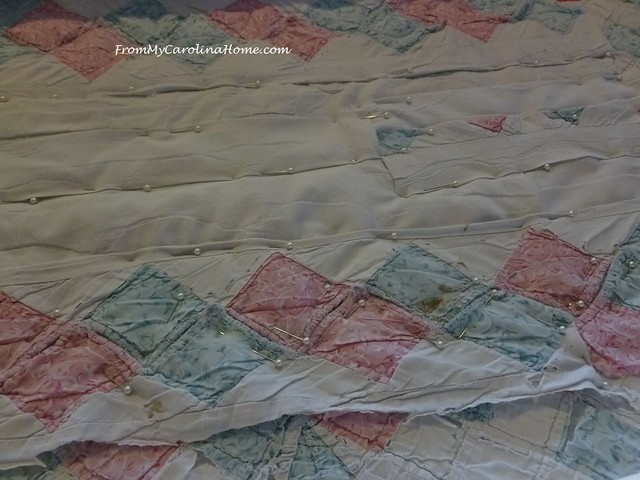 Then the patches were quilted over with loops. 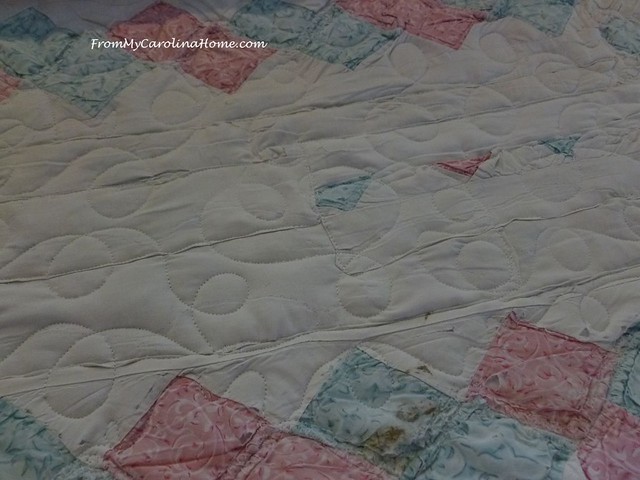 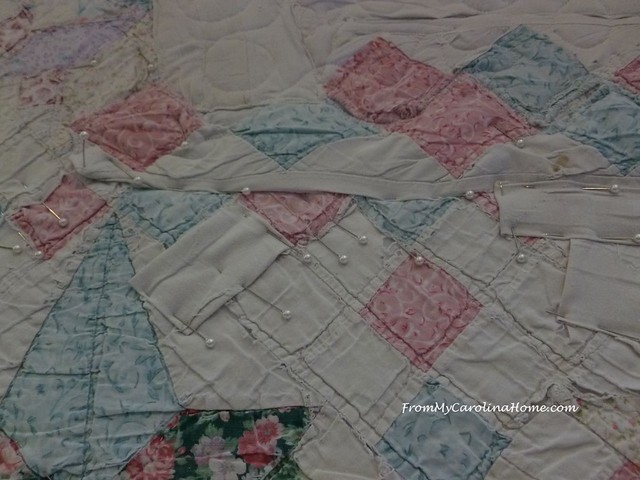 The largest section now done, there were just a few more bits to add. 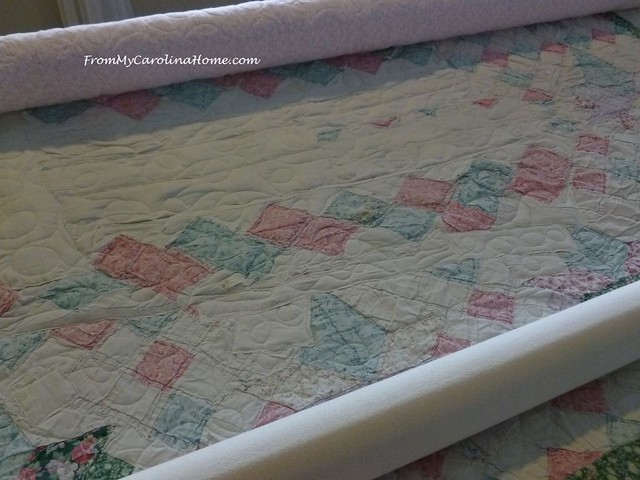 The pink and blue points from the edge kept the repair from being a big blank spot. 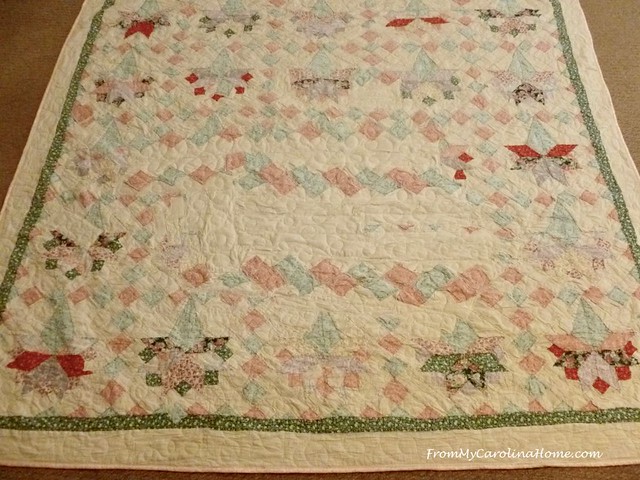 The owner and her 13-year-old son were really happy with the result.  A beloved heirloom can be used and loved by the next generation.   All the stitching, new backing and new binding adds stability to the quilt. 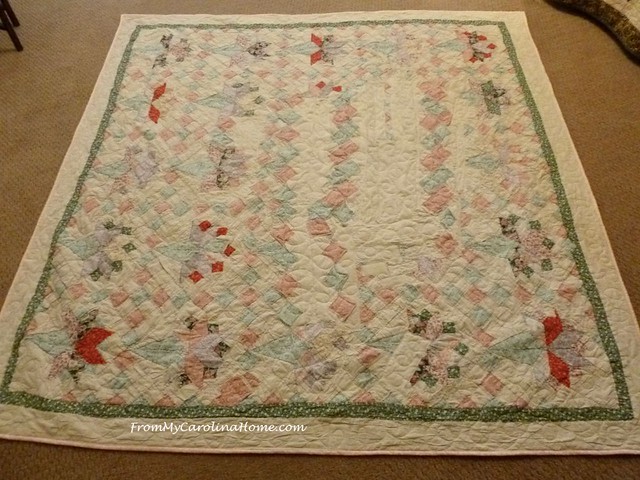 In case you are wondering, this project took 13 hours total time spread out over several days of intense cutting, pressing and pinning of patches, the quilting between the patches, along with making and applying new binding.   If you have an heirloom or vintage quilt, here are the instructions on how to safely wash it – HowToWashYourVintageQuilt

What do you think of the final result?

If you have a quilt needing repair, see my page Well Loved Quilt Repair at the top of the blog.

45 thoughts on “Repair of an Extremely Damaged Quilt”