Sometimes something extraordinary happens here, and very rarely do I get to photograph it, but this day was special.  Long time readers will know about the wild turkey we call Clarence, and how he comes by every few days for a handout.  His cluck-purr is wonderful to hear, and he preens a bit for us to get a few bites of whole grain bread.  On this day, I noticed him in the meadow through the kitchen window as I was cleaning up, and there was another visitor with him. 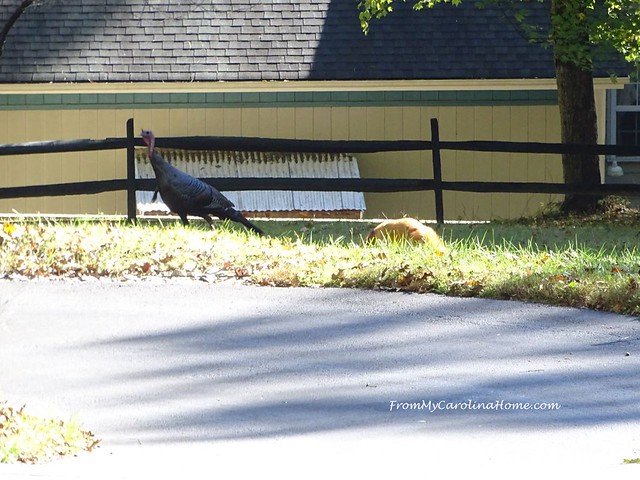 I grabbed the camera to get some pictures, realizing with the next one that the other visitor was the fox. 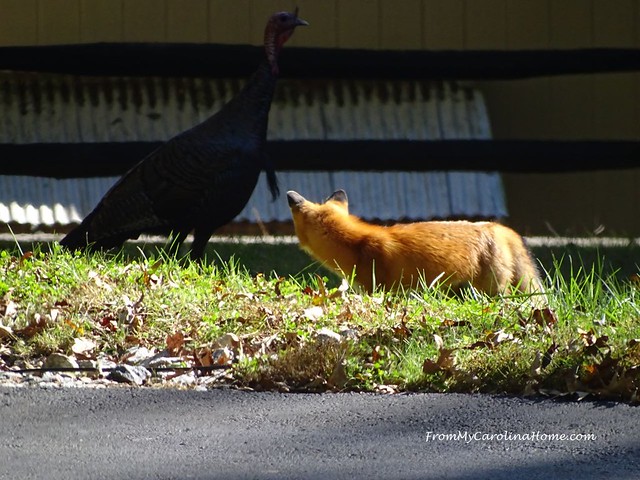 As I was about to start shouting to scare off the fox and save Clarence, something extraordinary happened. The fox turned around ignoring the turkey. 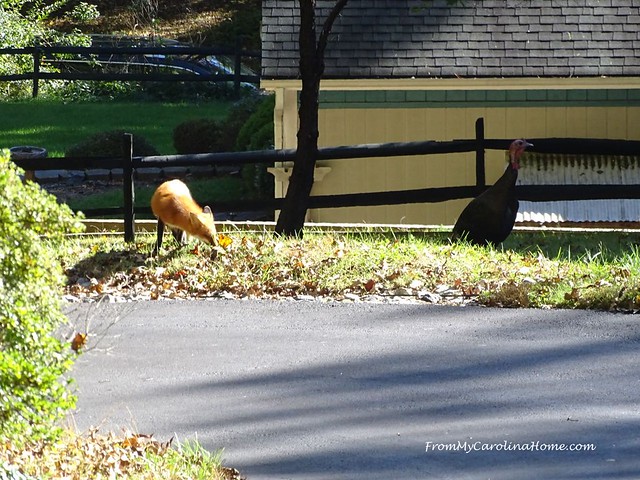 Where I thought Clarence was going to be a turkey dinner, turns out the fox wasn’t interested.  The late afternoon sun made his gorgeous red fur almost glow. 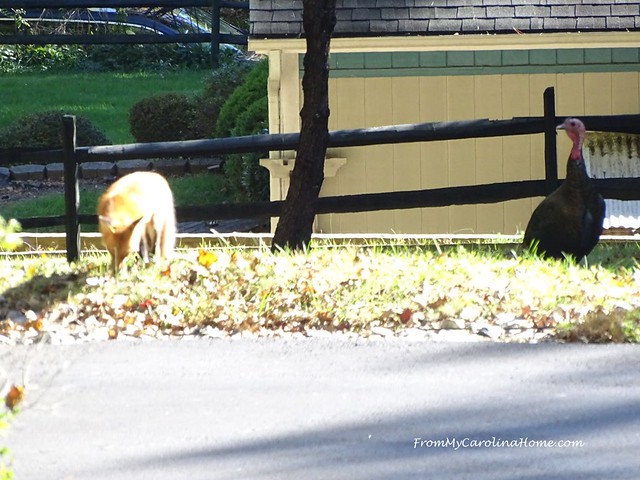 Fascinated, DH and I stood on the veranda and watched as the fox ate something at the edge of the meadow, not a small animal, more likely acorns or something similar which surprised us both. We did some research and found that foxes are omnivorous, like humans they eat a little of everything even nuts and berries.   While small mammals are their primary food, they eat a wider variety of foods than we knew. 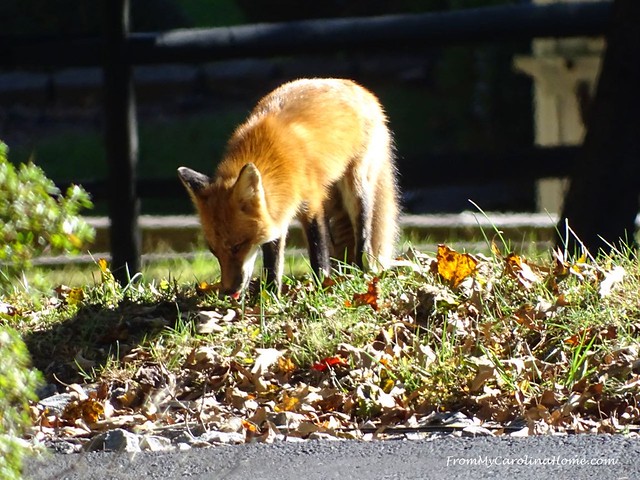 He ate his fill of something on the ground, and then moved on into the forest. So we went back in the house, and a bit later, the deer showed up in the meadow. 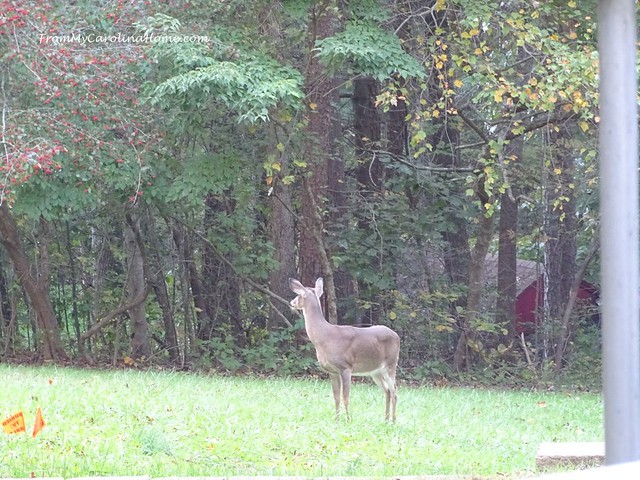 There were four this time, two does and two fawns. The little ones were playing with each other, so cute. 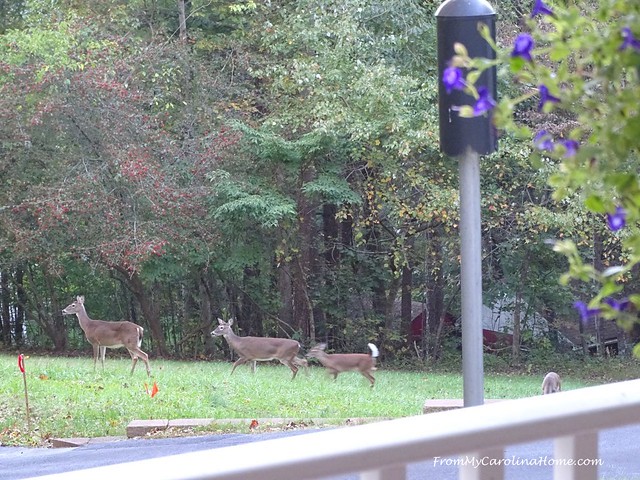 They were munching on the grass and not in a hurry this day. I took a couple of photos, then went back inside the house. 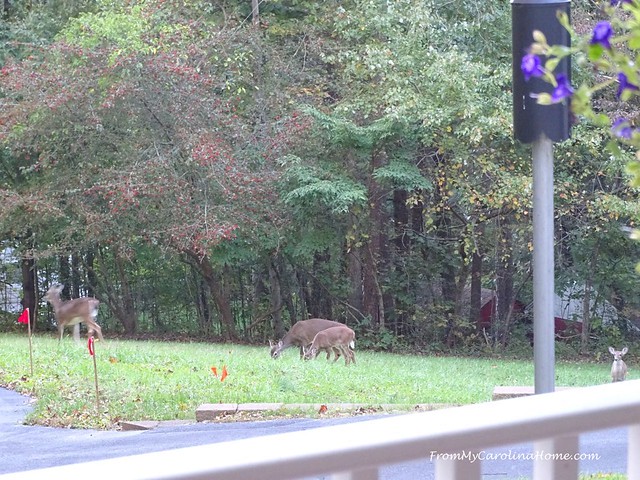 Then something else extraordinary. Clarence was still in the meadow, and he began flapping his wings and chasing the deer! I didn’t get back outside fast enough to capture in a photo. They ran around a bit, but weren’t too concerned with his claim on the meadow. I’ve never seen a turkey chase a deer!!

The next day, our resident woodchuck stopped by for a few acorns. 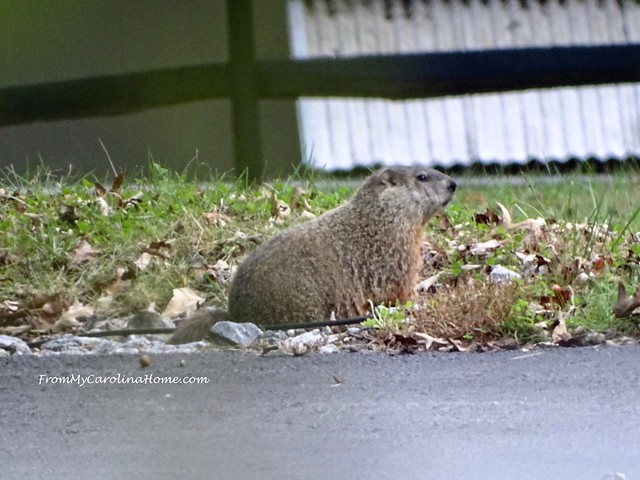 Later that afternoon, these two little guys came wandering by. 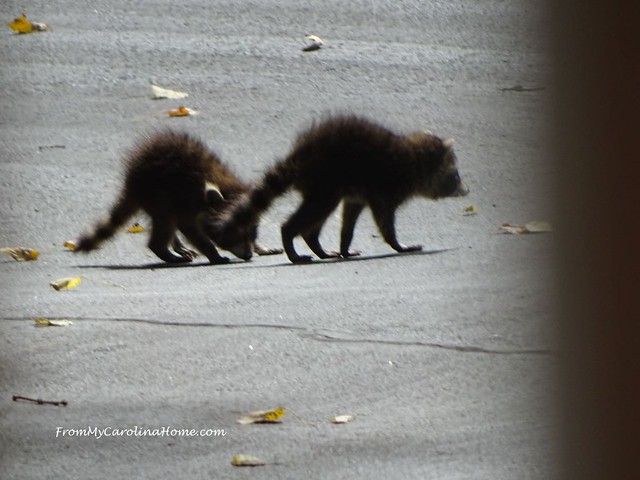 Yes, those are baby raccoons. It was surprising to see just the two of them alone, without an adult with them. I am afraid their mother is gone, and their chances for survival are slim. Later I saw one alone coming back across the meadow in the opposite direction. 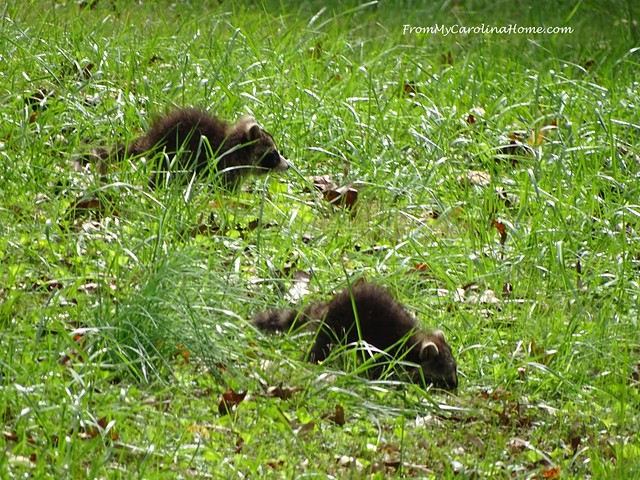 Meanwhile, the bird feeder is busy with lots of different birds coming by, even in the rain. 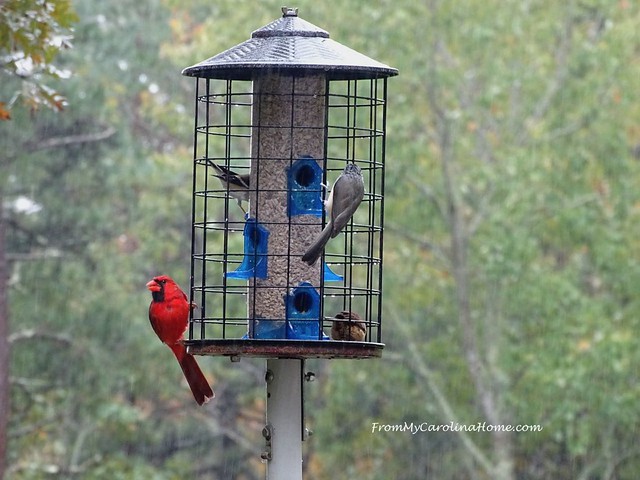 Here and there, the trees are starting to turn colors at our elevation now.

We had friends from out of state stay with us a couple of days, so we took them to the Arboretum to hike. There wasn’t a lot blooming this late, but we did see these carnivorous plants in one of the stream beds. 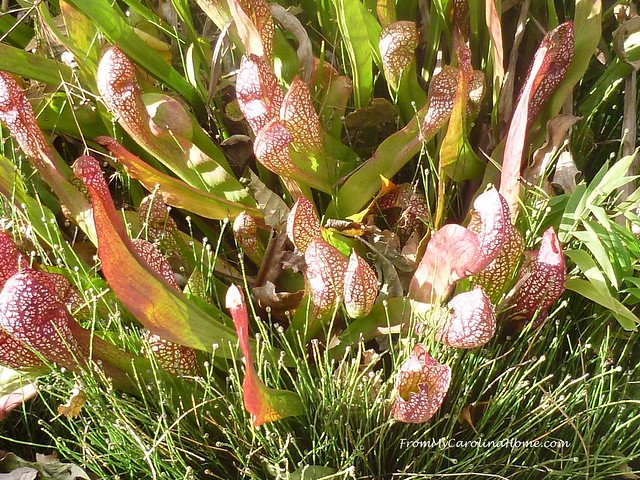 There were two varieties, and I cannot remember what they are. They have interesting shapes though. 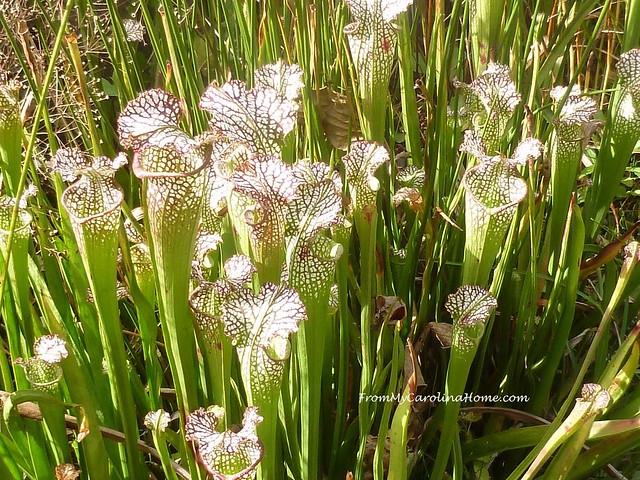 Back at our place, the trees are coming into more color across our property. Looking down the driveway, there is still a good amount of green after the rain. 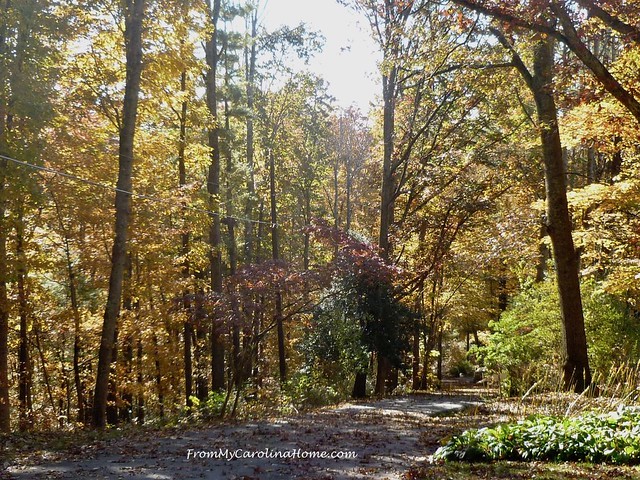 The forest at the edge of the meadow is showing a bit of gold and yellow. 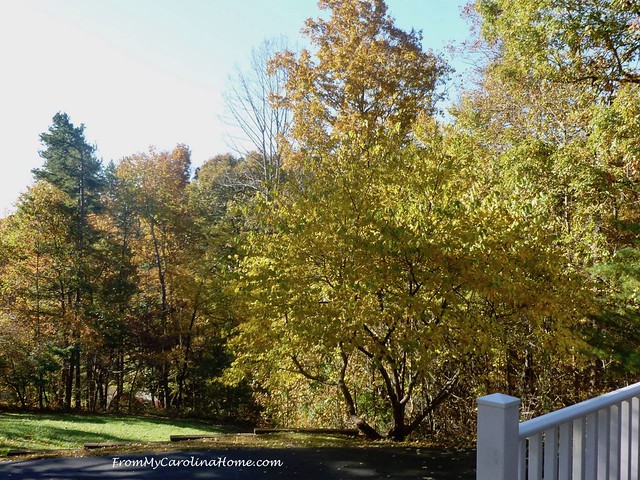 Looking across the valley, our neighbor’s tree that was full of gold leaves the day before, lost all of them to the rain and wind in one day. 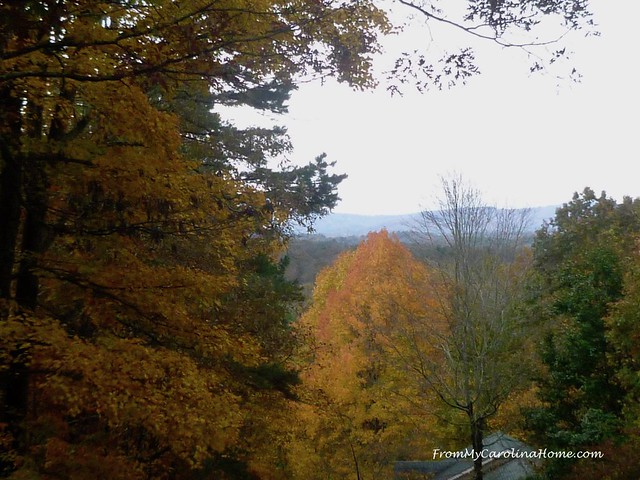 Looking out back across the cove to the next mountain, so much is just golden brown, pretty but not the vibrant color we usually have in November. 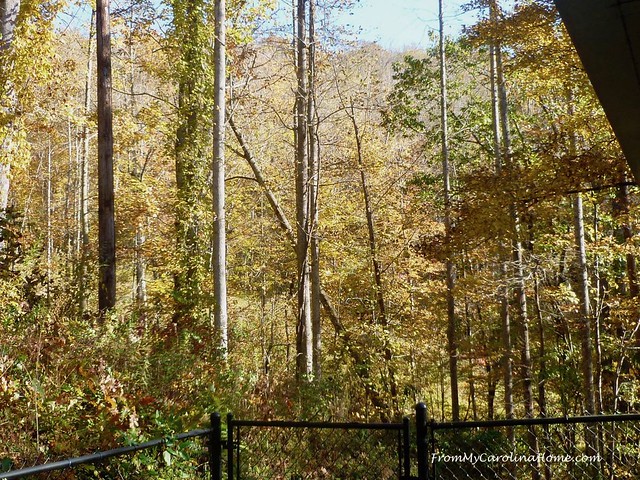 In the back, looking up at the trees the colors are brighter in the sunlight. 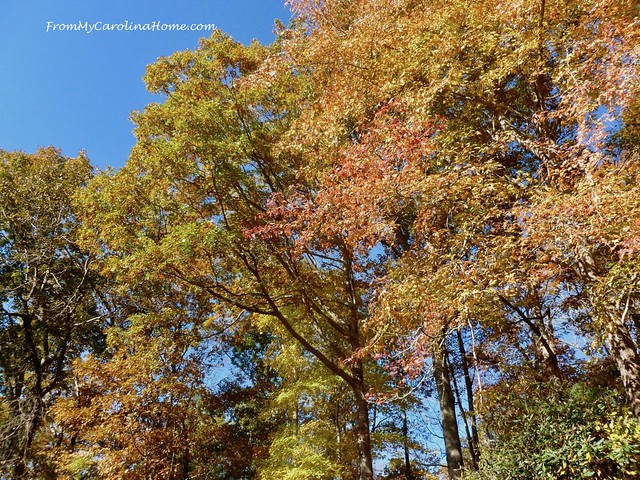 On the mountain behind the house, the rhododendron will stay green all year while the other trees and bushes put on their autumn colors. 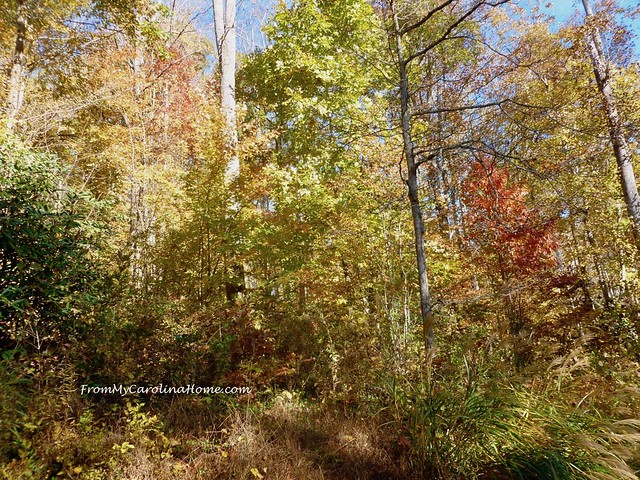 There are some gorgeous maples in full blazing red at a shopping center near our home. I love this rich, saturated red and wish our maples would be this color. 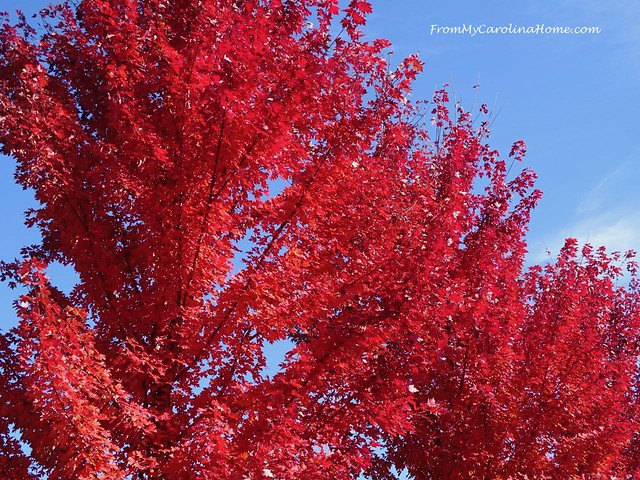 What’s happening where you live? Autumn glory or springtime flowers?