While we were in England in May, we had beautiful weather the entire time.  Most of the time was mild temperatures, with partly cloudy skies.  When I did the poll, the second highest vote on what readers wanted to see from our trip was a tie, so we’ll start with Windsor Castle and St. George’s Chapel, and get to the V&A in a couple of weeks.  This castle and grounds have so much history, with the castle, walls and chapel taking more than 300 years to build. 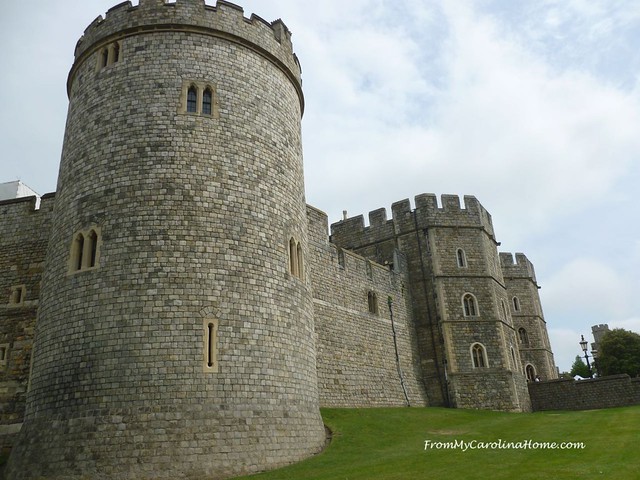 The oldest surviving part of the present castle is the wall extending from the Cornwall tower which still contains stone from the 11th century.  Henry I began building the the first tower in 1070, with the additional towers and walls added over the next 60 years by Henry II and Henry III.  When Edward III became king in 1327, he made substantial modifications to the castle, making it into a royal home, expanding the living areas for the family and adding Gothic architecture along with building St. George’s Chapel. 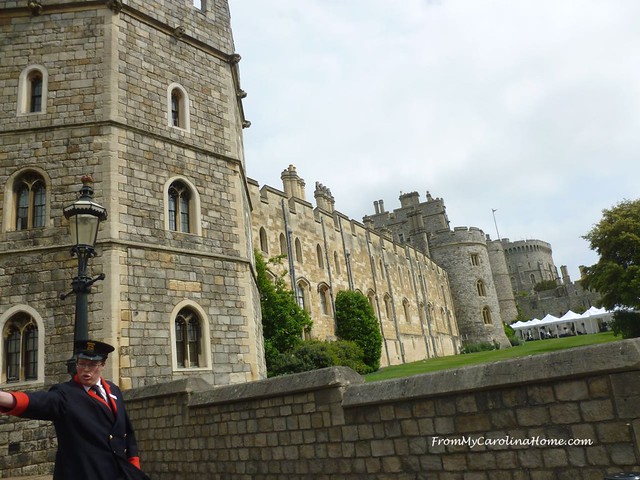 This area is the Upper Ward.  The main buildings have had Gothic details added to the windows, gargoyles added to the turrets and more architectural details around the top.  It was an interesting juxtaposition to see the airplane in the sky over this very old castle. 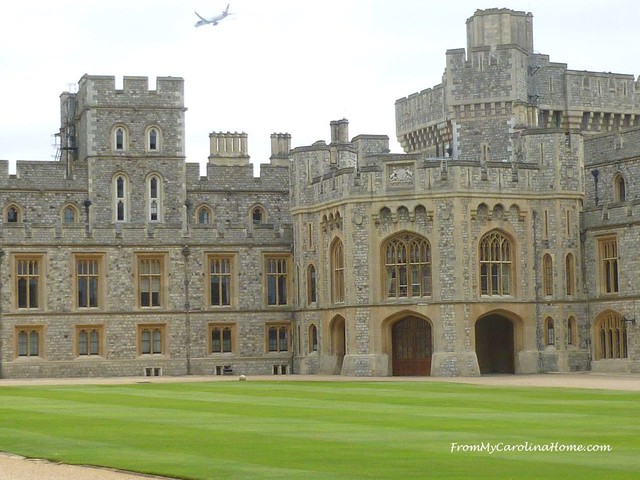 While we were there, a changing of the single guard on duty was fun to see.  This is not the Changing of the Guard that encompasses the entire guard complement at once every 24-48 hours.  We were not there at the right time for that ceremony. 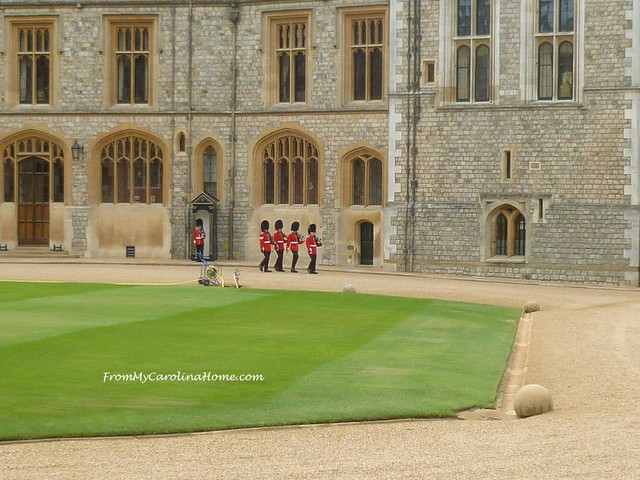 The guards marched toward the gate where I was standing, and I realized they were going to come through it.  This area is off limits to visitors, as it encompasses the apartments where the queen currently resides.  She spends most of her weekends here. 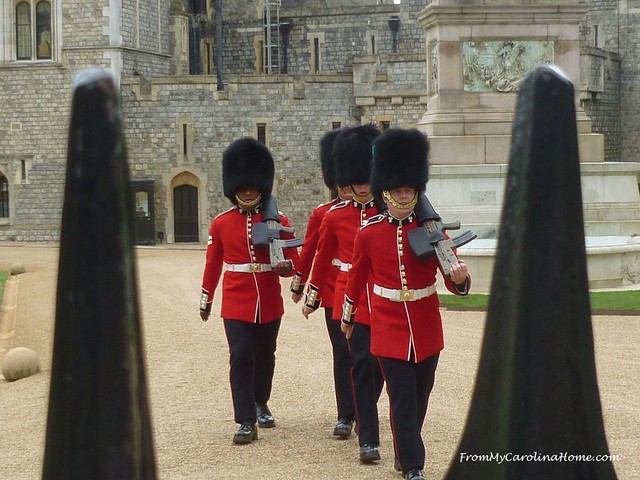 Seeing them up close and standing still briefly, you could see the seriousness of their duty, and the weapons they carry.  I was also impressed by the size of their shoes!  Thick and heavy, those shoes made impressive sounds as the soldiers marched and snapped to attention. 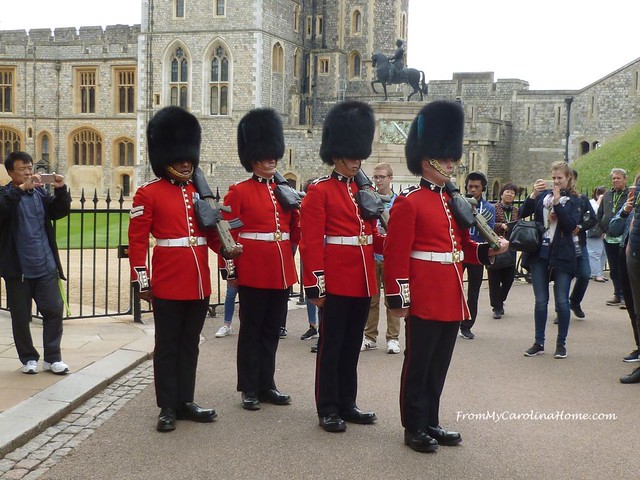 Inside the castle, I took a picture of one of the dish displays, and then was politely asked to put my camera away.  Pictures were not allowed inside the castle, which honestly baffles me.  Pictures are all over the internet, so what is the deal with that? It isn’t like it is a security issue, and if a flash isn’t used there really isn’t a good reason not to allow photos.  Many places have given up trying to police that, and truly they can’t with the phones today.  The books they sell don’t have the close up details that I like, but I guess they just want to sell souvenirs.  There were a dozen displays like this one with spectacular dishes. 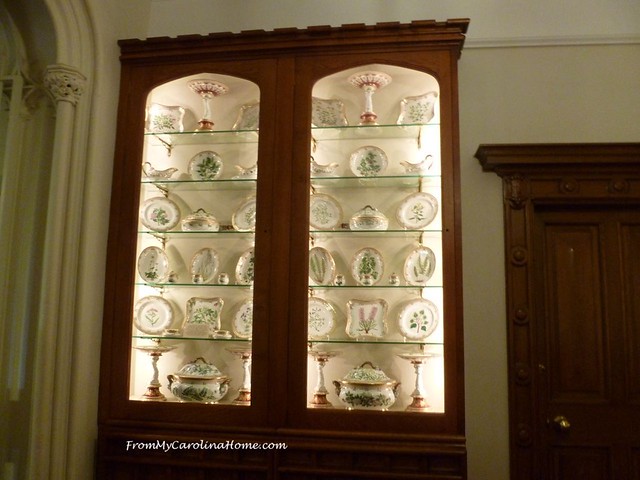 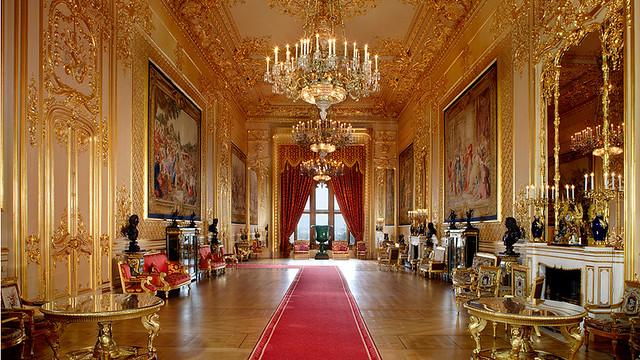 Windsor and St George’s Chapel are the home for the Order of the Garter, an order of chivalry founded in 1348 by King Edward III.  Edward had an interest in the legend of King Arthur’s Knights of the Round Table, and began construction of the round tower at Windsor in 1344.  As he was advocating his own claim to the throne of France, he founded the Order of the Garter to campaign for his claim.  The order was limited to 24 members, plus the Sovereign.  The order survives to the present day, still with only 25 total members.  Women were not allowed in the order, with the exception of the Sovereign Queens, until 1990 with the appointment of Lavinia Duchess of Norfolk as a full companion.  This ceiling, part of the walls and some of the window wells contain the shields of all the knights to be in the Order of the Garter – 670 years of history!! 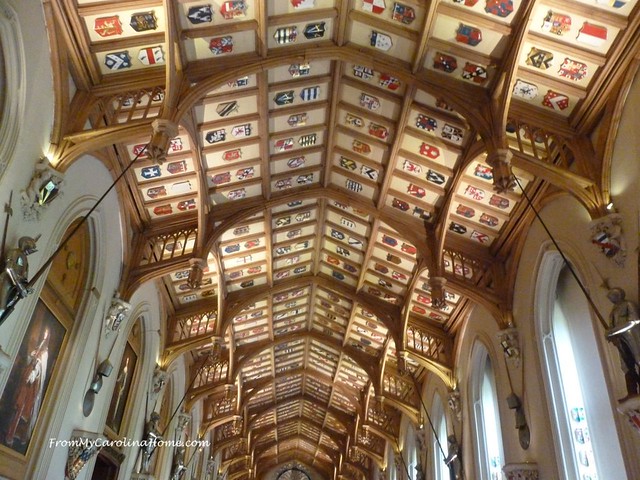 In one of the shops, an aerial view of the castle and grounds gives you an idea of the size and scale of the castle and wards.  The apartments along the lower side house the members of the Order of the Garter should they choose to live there. 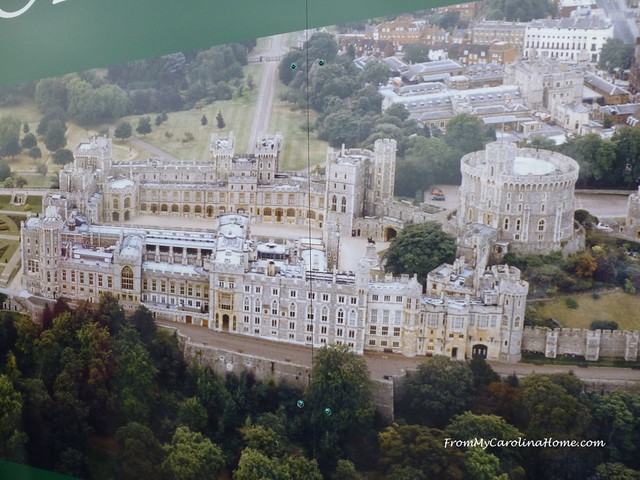 Back outside, the gardens around the castle were lovely. 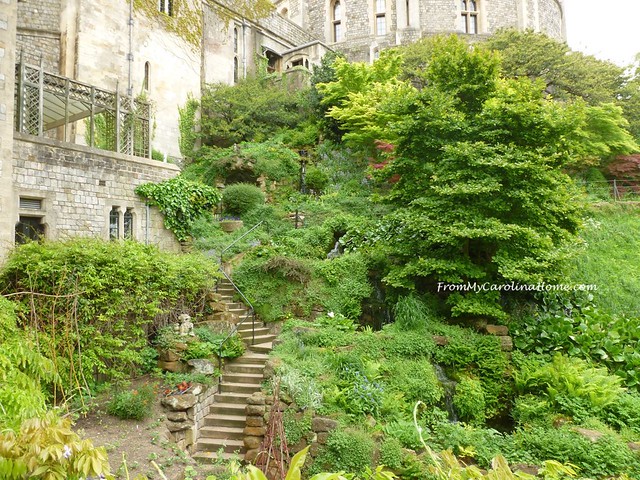 Some flowers were in bloom, but mostly it is green space, with a lovely pond. 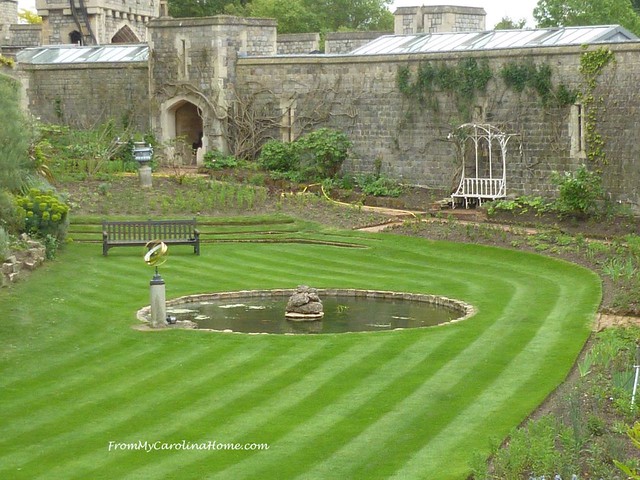 The other side of the tower has huge ferns and ancient stone wall terracing. 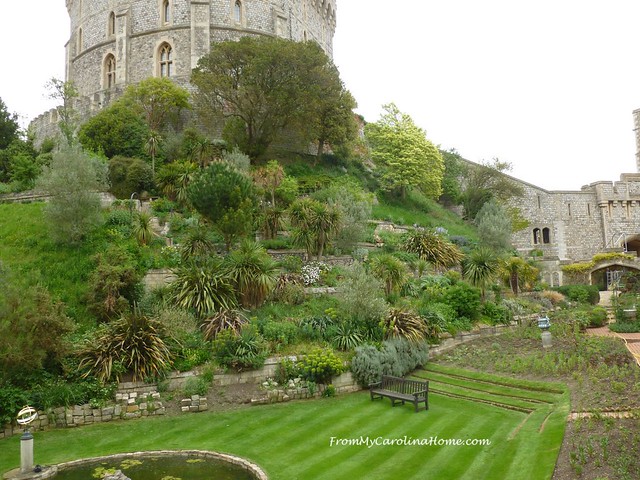 This is the Cornwall tower, noted for the spectacular windows.   The Gothic details were added in the 1600s over 100 years after it was built. 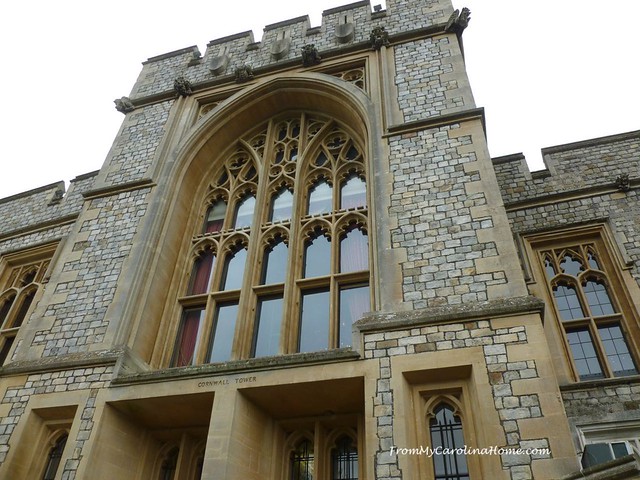 St. Georges gate has a sculptural relief of the legend of St George and the Dragon depicted in the architectural detail at the apex of the gate.  St. George was a 3rd century priest, persecuted for his catholic faith and beheaded.  He is the patron saint of England. 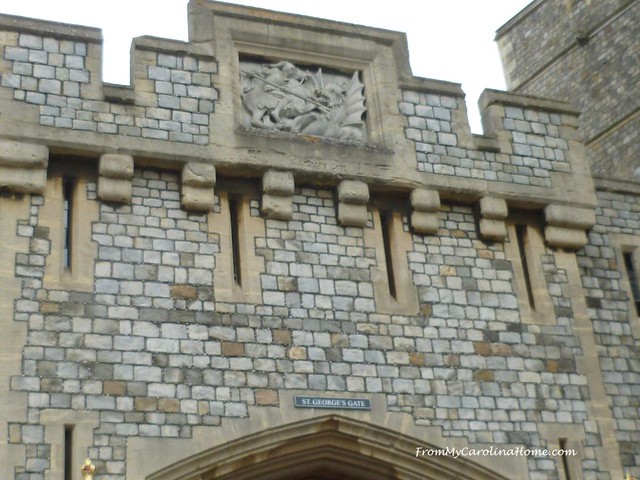 St George’s chapel is a spectacular example of Gothic architecture.  At the very top are statues of the Queen’s Heraldic Beasts.  The chapel was begun in 1348 by Edward III, then added to by the next several kings well into the 1500s. 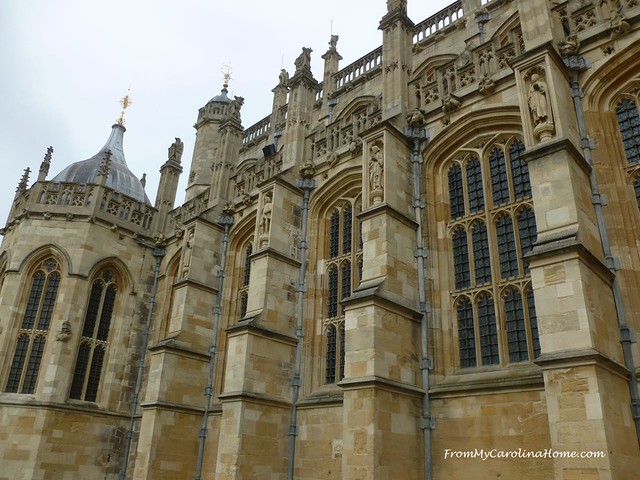 I spent quite a bit of time trying to find out the identity of the human figure reliefs on the side of the chapel, but to no avail.  More of the Heraldic Beasts and gargoyle heads can be seen here above them.  You can get a closer view on the St. George’s Chapel 360 view of the Lower Ward.  It seems likely they are saints, but there isn’t a confirmation of that online that I could find.  When we were there, the castle and chapel were being made ready for the wedding of Prince Harry to Megan. In the picture below, the framework for the huge greenery and white flower arbors was in the process of construction around the door.  Soon after we were there, the castle and grounds were closed for the rest of the week for the wedding. 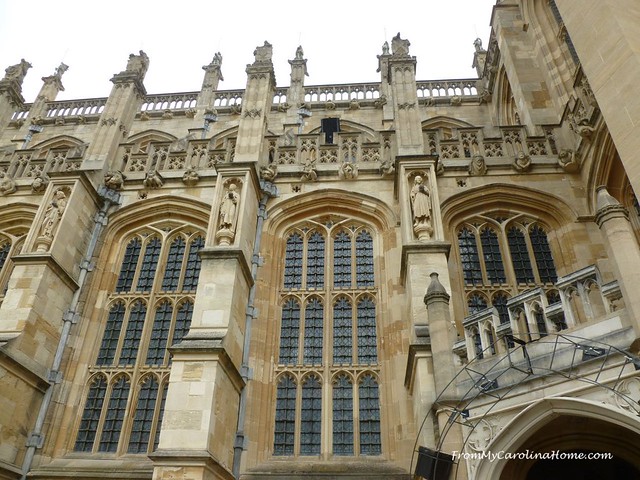 Inside the chapel, again photos were frowned upon. But the St George’s website has some great views of the stunning Gothic architecture. I remember studying this years ago in an Art History class.  The building of the Nave began in 1483 and was completed in 1509.  Imagine, taking 26 years to construct a building, with all the artisans and craftsmen it must have taken.  Boggles the mind. 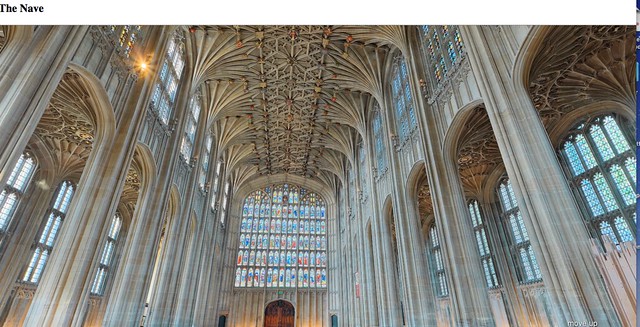 The best views of the stunning woodwork and architecture can be seen on the St George’s chapel website, where you can get 360-degree views of each section, click on St George’s Chapel Virtual Tour to see.  The photo above and below are courtesy of the official website.  Each of these woodwork spires above the Quire seats is unique, individually carved oak with an open design, just amazing.

I see a quilting pattern in this bit of ceiling architecture detail, don’t you? 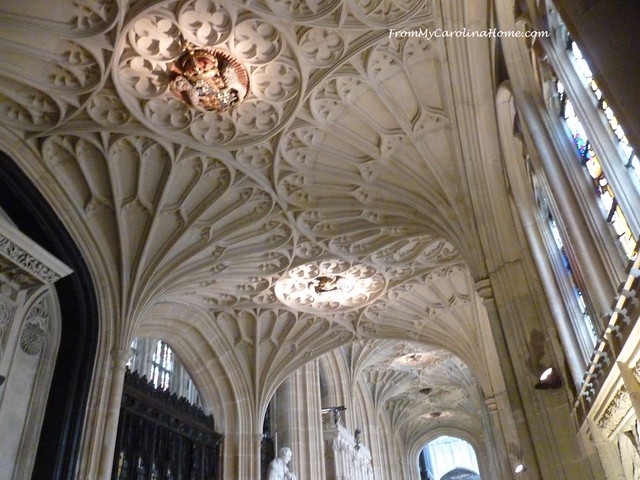 Construction and work on windows and interiors continued until 1528.  In 1534, King Henry VIII breaks with the Catholic church, and becomes head of the Church of England with St George’s Chapel as its primary home.  He is buried here, alongside his third wife, Jane Seymour.   Their tombstone is on the floor in the Quire. 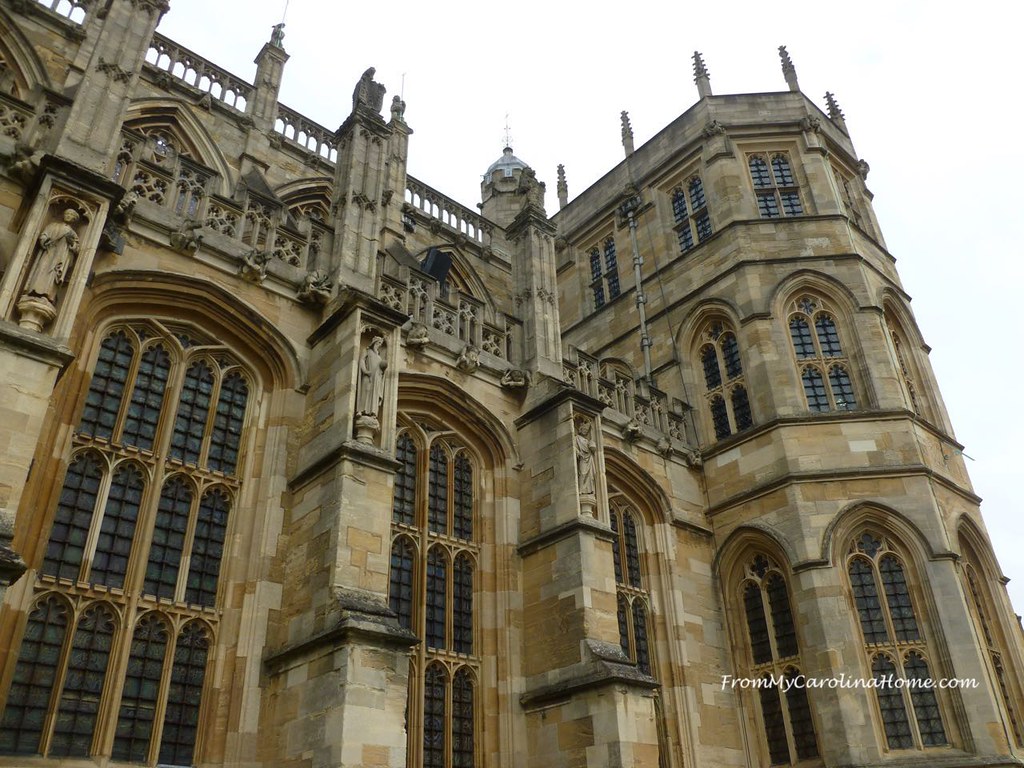 The stonework is amazing.  Just touching the cold stone, knowing it was there for hundreds of years before me, and will stand for hundreds more after I am gone, is awe inspiring.  Are you a fan of Gothic architecture?