A friend called recently to ask me if I would do a charity quilt she volunteered to do.  Someone else had made the top, but wasn’t able to quilt it due to health reasons.  So, my friend volunteers after no one else in the club she attends would do it.  She wasn’t feeling well either and didn’t want to delay it getting done, so she asked me to help, and of course I said sure.  She brought it over without taking it out of the bag, and boy did I get a surprise. 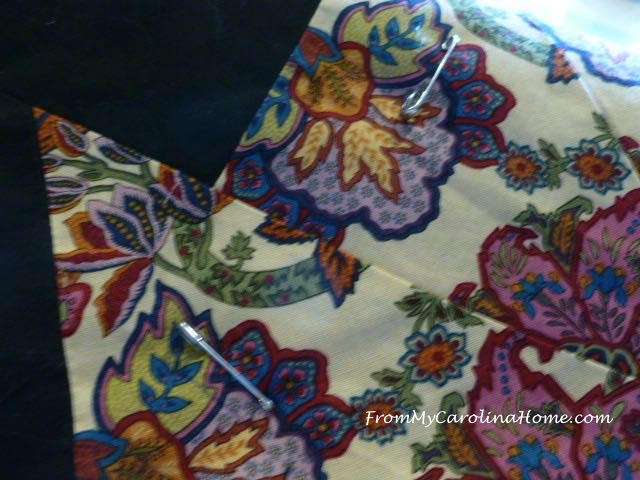 It was pinned with an abundance of safety pins.  Presumably, the maker intended to quilt it herself.  So, I got to work removing all those pins. 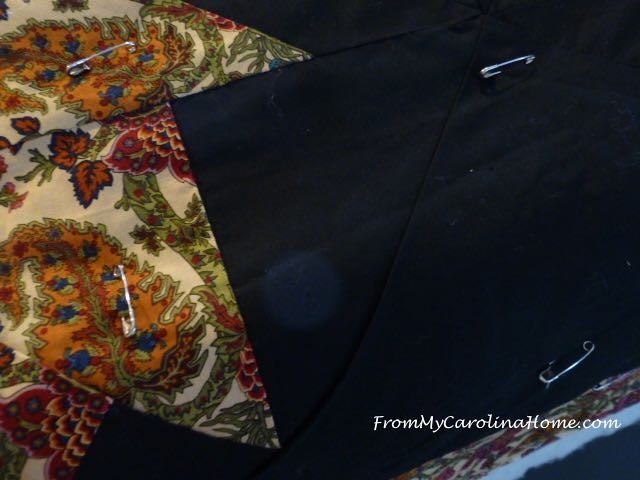 I thought I was done, but when I tried to separate the top from the backing, it wouldn’t come apart.  Closer examination revealed a few of these plastic tab things. 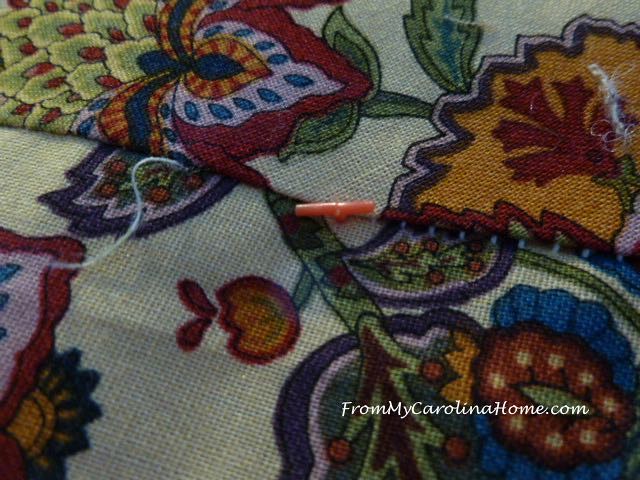 And then another one, and still more! 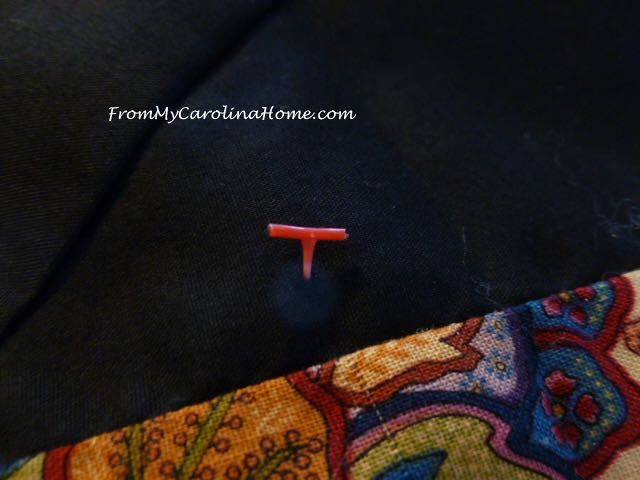 Finally, I got a bit smarter, and flipped the quilt over where the orange beasties stood out against the white backing. 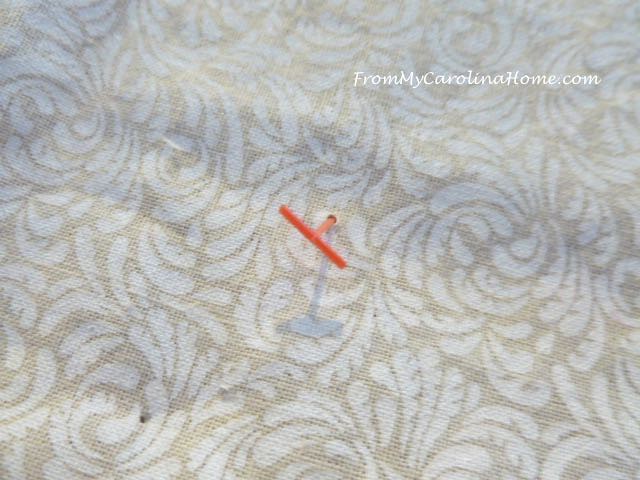 Then I had to remove the basting along the edge.  This would catch a longarm foot in a hurry and mess up the edge. 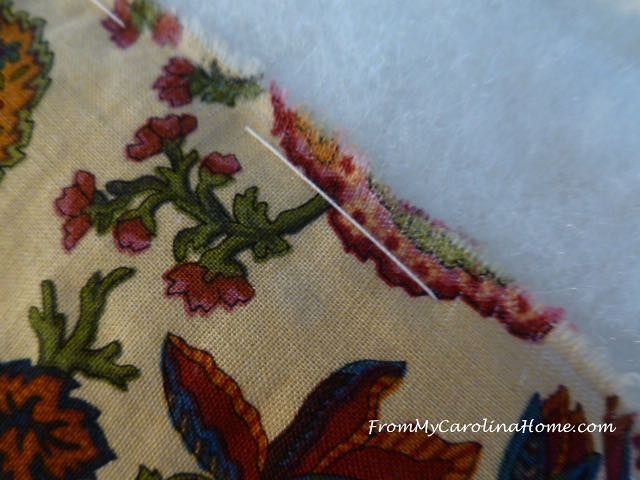 Laying it out on the floor, it was apparent this one was going to have little mountains at the center of all the stack and whack wheels. 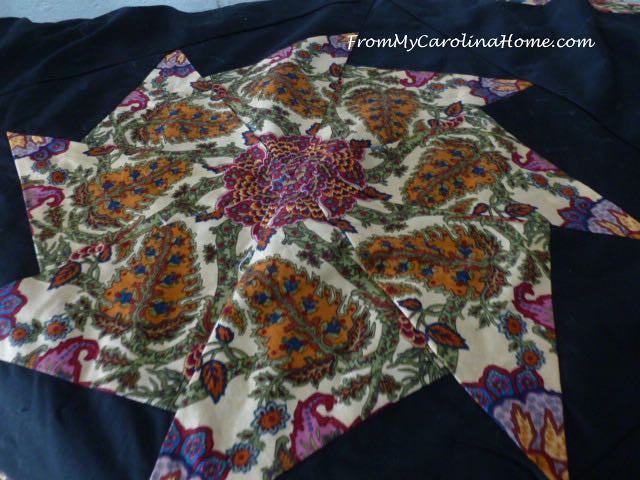 Thankfully, as you can see with my fold-up trick, the borders were put on correctly. 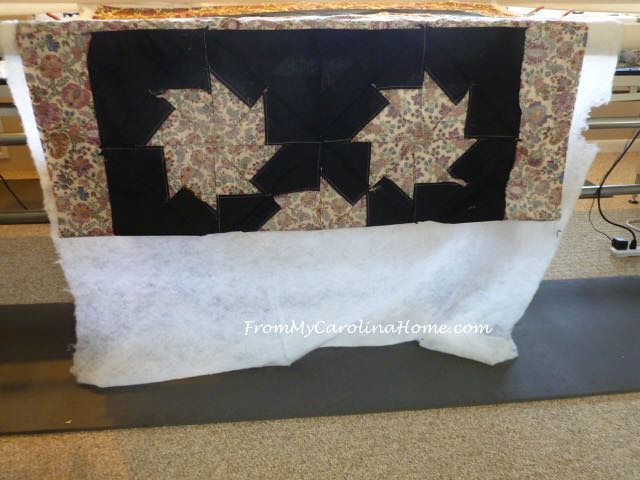 I ran a line of stay stitching across the top, then did the Best Press and steam trick to flatten out the piecing as much as possible. 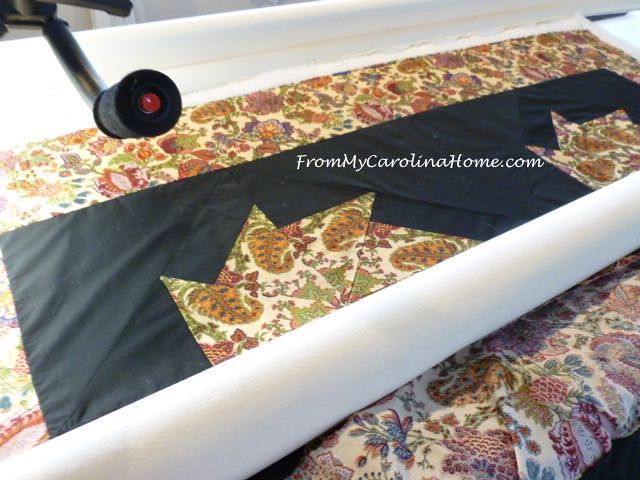 I decided to do a free hand loop quilting treatment on this one.  A pantograph would be too hard to manage with all the fullness. 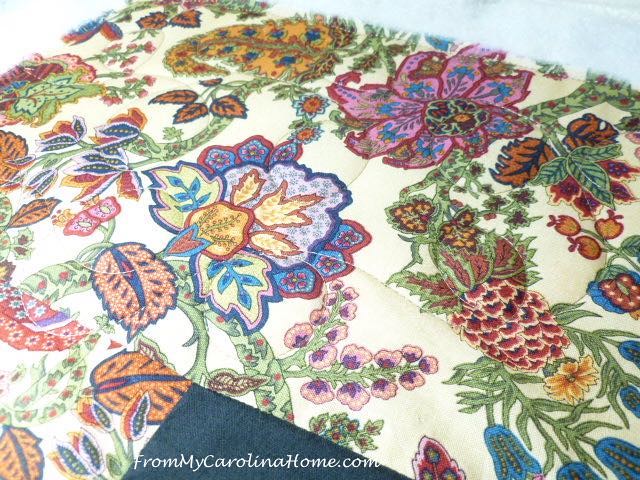 Plus, doing the quilting from the front where I could watch where the stitches were going meant I could avoid the really full center seam convergence areas.  You can see here how I made a loop go around the points. 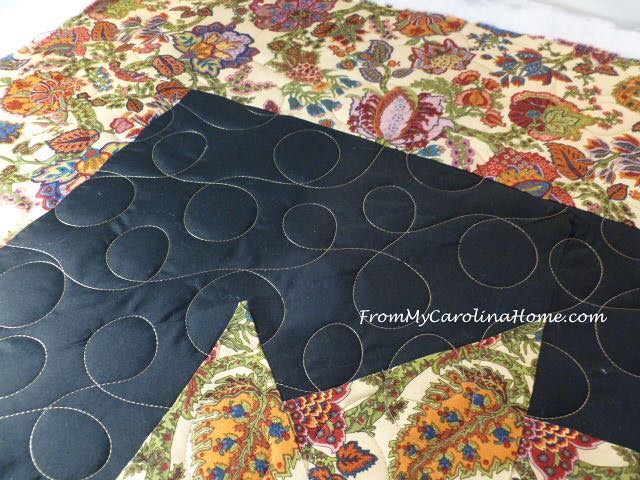 I don’t do this type of pattern in rows, rather I work on an angle, trying to leave areas for the next pass to come up between the previous pass in some parts so that it seems more random. 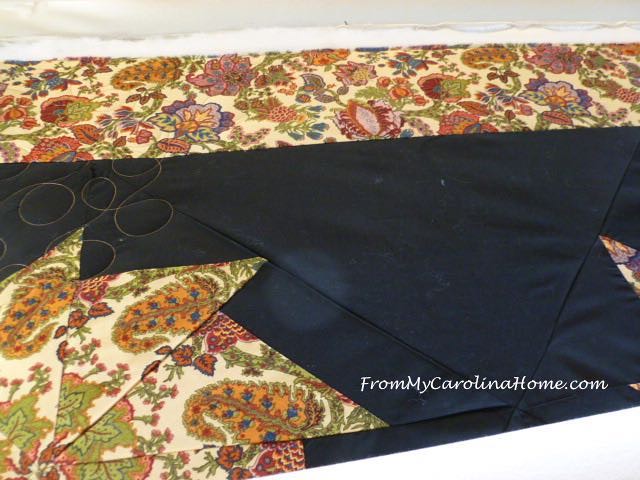 The bad news is when you have a thread break with light thread on black, it takes special care to tie off and bury threads so this isn’t obvious. 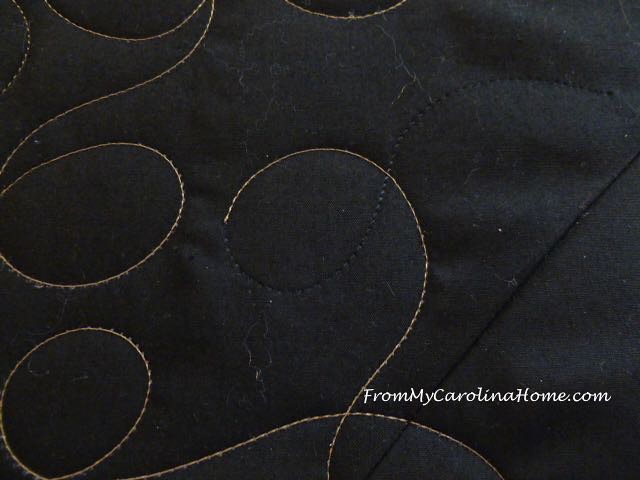 The good news is when you quilt with light thread on black, you see right away if the bobbin thread jumps out of the tension spring.  This was fast and easy to take out, but would have been much longer if it had happened with a pantograph, because I likely wouldn’t have noticed until the end of the row. 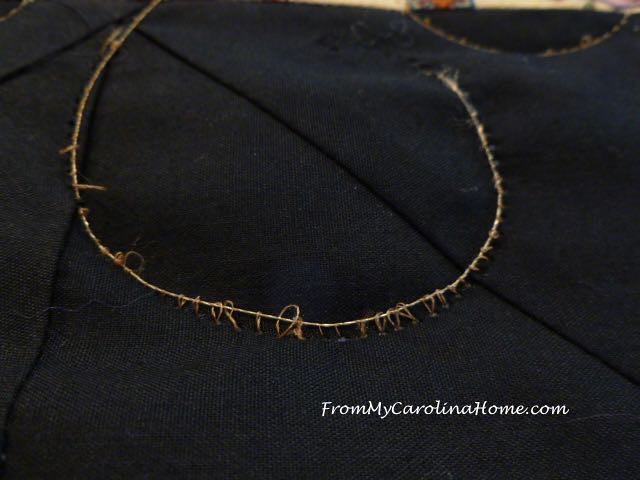 Anyway, all fixed and moving on.  The rows go roughly from the bottom left to the top right.  A big advantage to this is I can quilt a huge path across, as the machine doesn’t even realize when it is moving against its preferred direction because of the loops.  So it continues to sew nicely, whereas moving against the natural path usually results in some thread breaks. 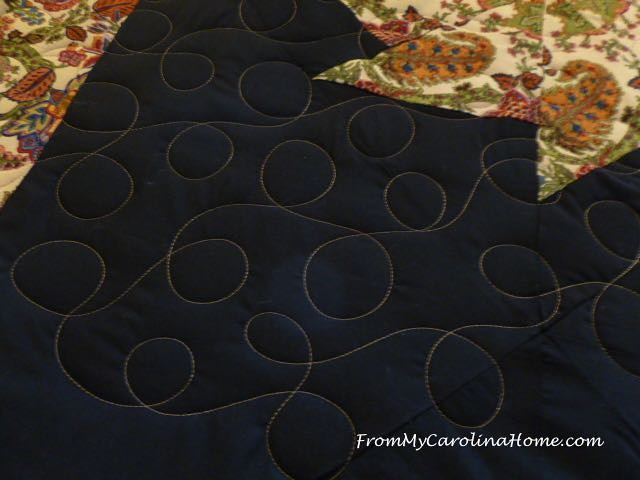 I could continue to circle around big heavy points where multiple pieces came together.  Some of the puckering was unavoidable due to the excess amount of fabric in the middle, but this won’t be a problem once the quilt is washed. 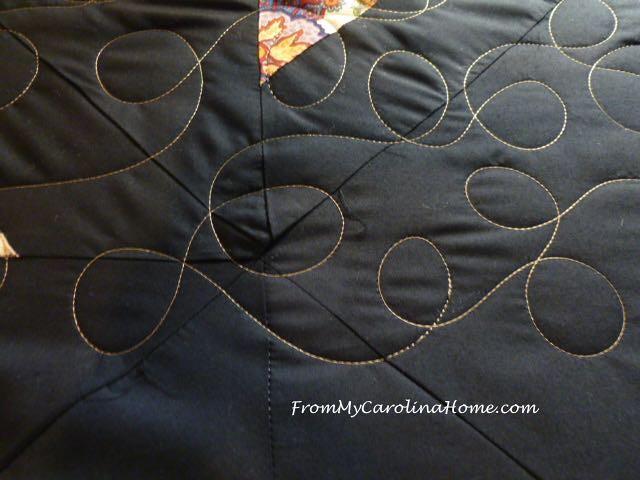 I could quilt from the top all the way to the bottom of each pass in a 20-inch path.  This is by far the fastest way I can turn out a quilt as I can use up every inch of quilting space available on each pass. 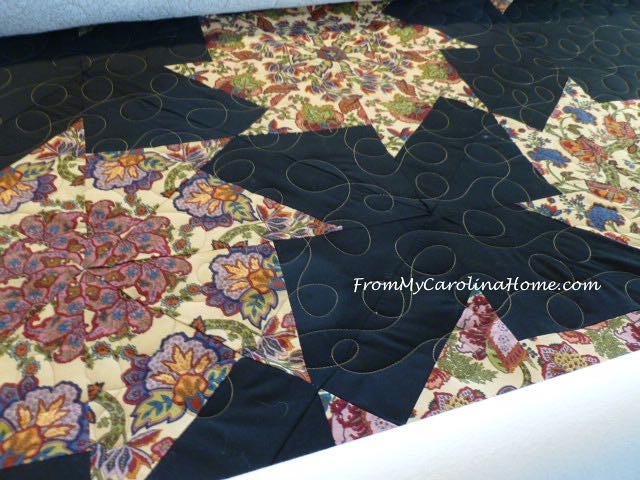 Just a little practice and the loops are more or less the same size.  A bit bigger or smaller here and there really doesn’t make a difference. 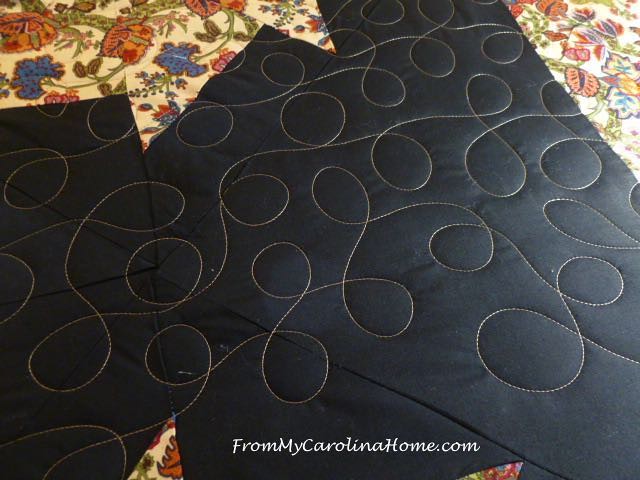 Almost done, it took less than 2 hours on this throw size quilt.  It actually took longer to get all the pins and tabs out and load it than it did to quilt it! 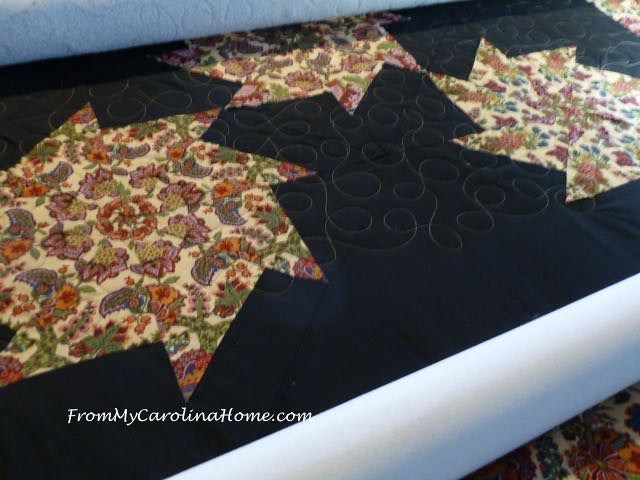 Quilting finished, it is a pretty quilt. 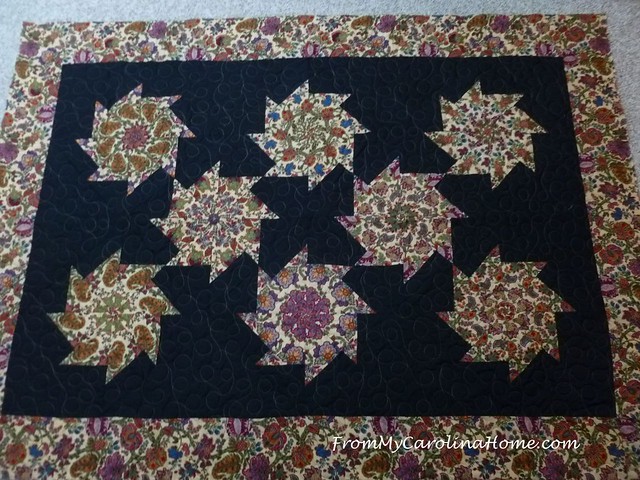 I am sure a charity will be happy to have it. 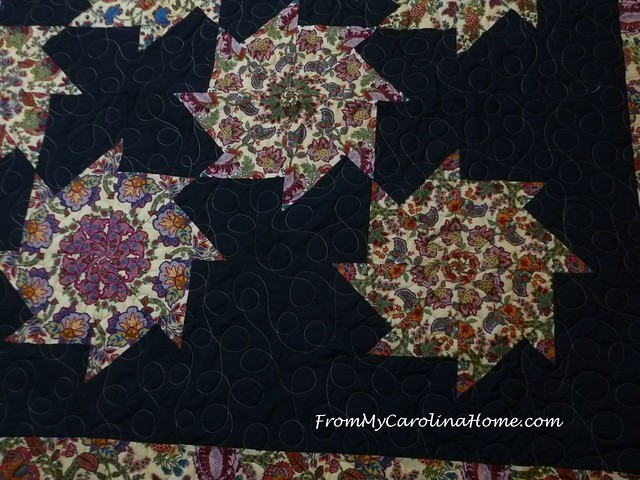 Most of the fullness did flatten out, with only a few puckers here and there. 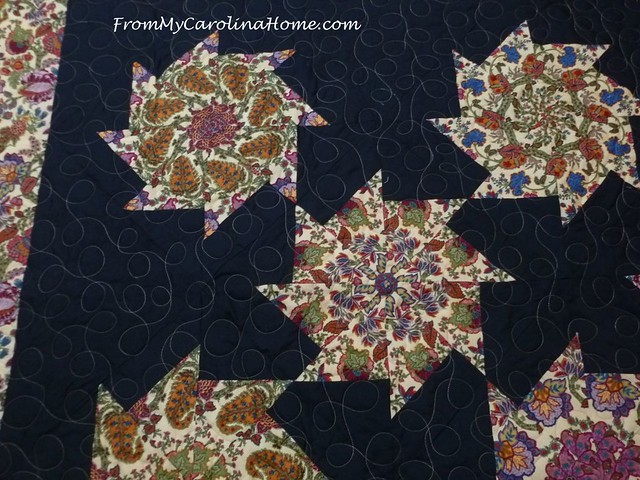 Fat Quarter Shop’s Basic of the Month is 20% off Pat Bravo Basics!
If you’ve ever wanted to do affiliate links on your blog, Check out ShareASale.
Did you know, Amazon has an Outlet Store with huge bargains. 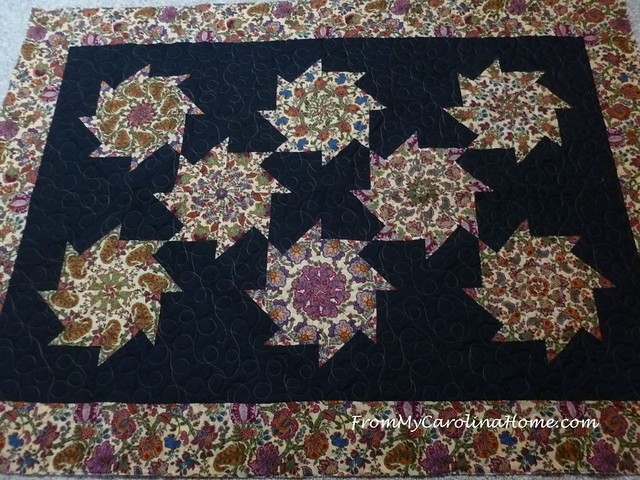 Freemotion on the River Linky Tuesday

Can I Get A Whoop Whoop