Last fall, the NC Arboretum hosted a gathering of fifteen Bonsai Societies in a marvelous exhibition of this ancient art.  Entries for judging came primarily from associations in North Carolina, along with Tennessee, Georgia and South Carolina. The bonsai trees ranged from the amazingly tiny to huge. I took almost 100 photographs of these interesting displays, and chose a few of the most interesting ones to show today.  If you didn’t already know, bonsai is pronounced “bone-sigh”, not “bahn-sigh” like I used to think before seeing the permanent exhibit at the Arboretum just a couple of years ago. 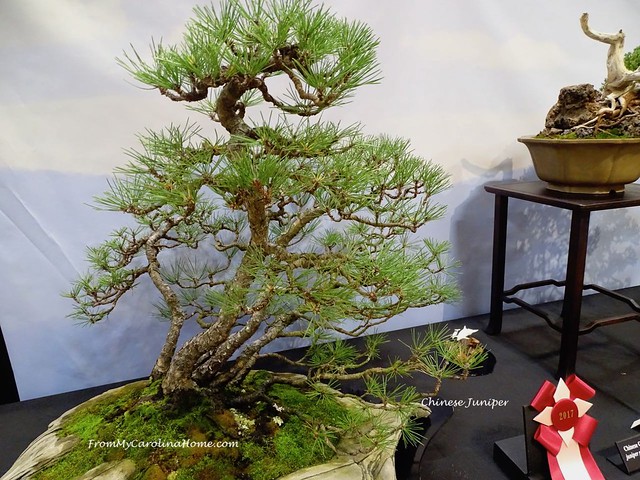 Bonsai has many artistic rules governing the aesthetics including asymmetry, miniaturization, and proportion.  Here, a Kingsville Boxwood has been trained into a pleasing shape with some extra natural elements in the container to create a scene. 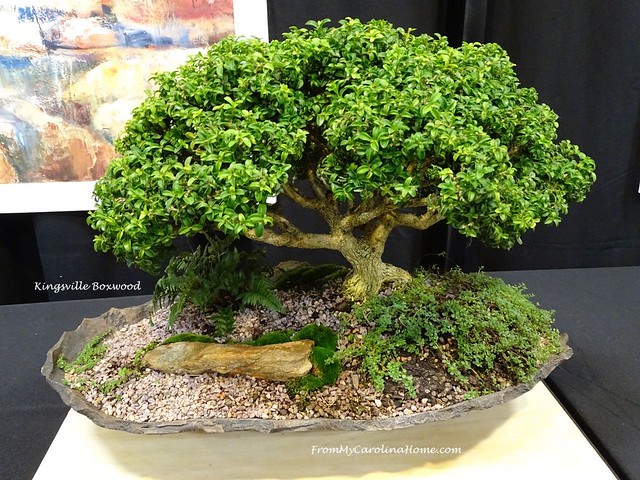 A Dwarf Hinoki Cypress miniature tree sits on a wonderful stand suggesting tree branches.  The straight style with the trunk growing straight up is called chokkan, with larger branches at the bottom and smaller ones at the top. 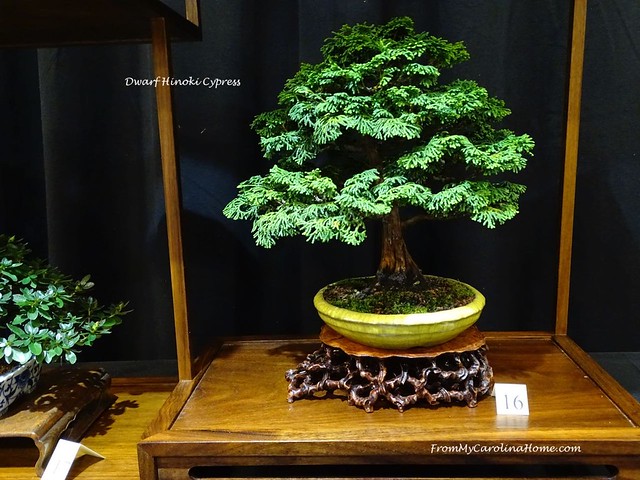 Natural materials such as driftwood are sometimes used as a base for the bonsai.  Moss is used to suggest ground.  This container seems to simulate a rocky cliff.  It is suggestive of the cascade style of bonsai called kengai. 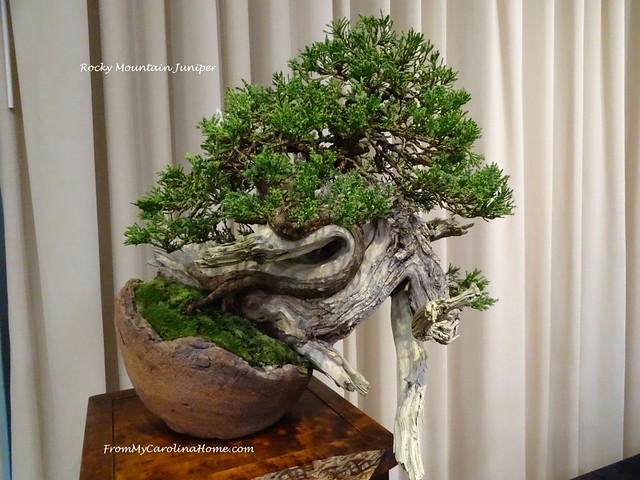 This interesting bonsai has the asymmetry so typical, along with the unusual element of roots exposed in the air.  The Colorado Spruce has the small needles needed for proportion. 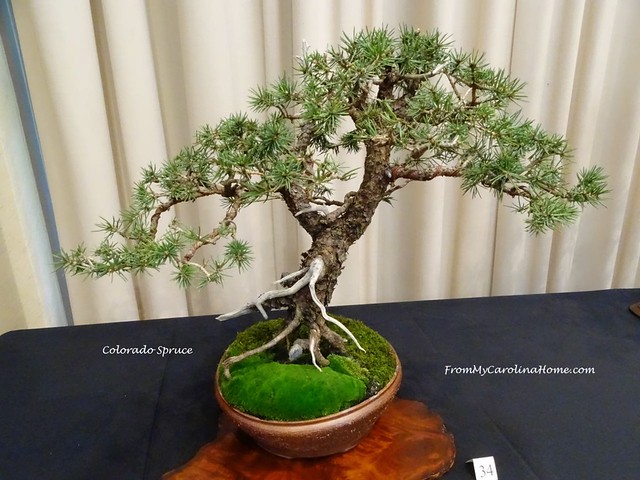 This one was a bit of a departure from the rules as the leaves are larger than what is usual proportion for bonsai, and the persimmon fruit is also larger than usual.  But the lovely color of the fruit draws the eye. 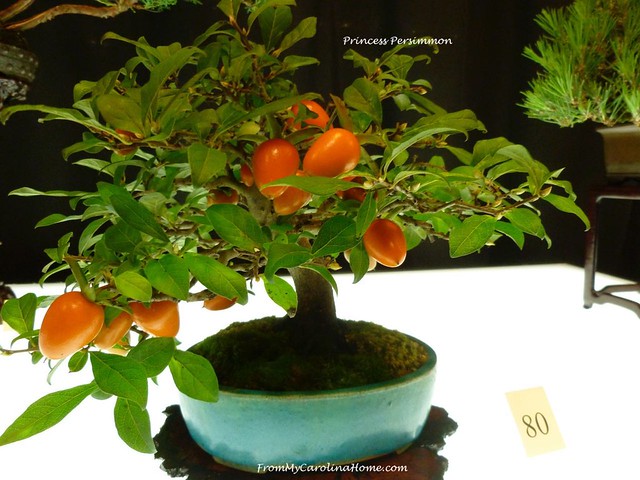 Another bonsai using weathered wood as the base. 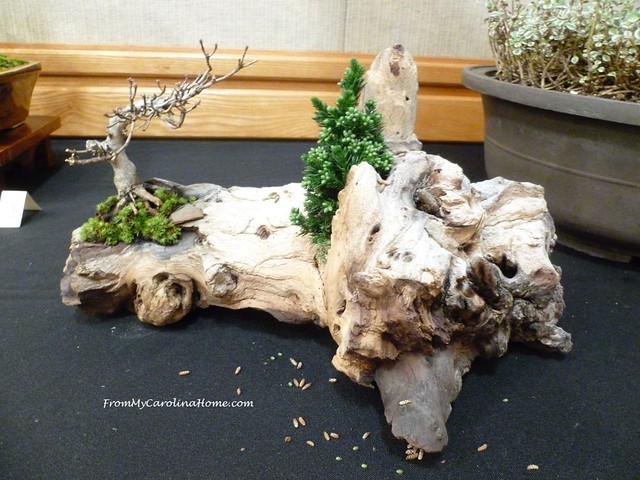 This Chinese Elm seems so simple, but look closer.  All the branches extend from the top side of the trunk, with a progression of length to create the triangle shape of the canopy in the formal upright style.  The container is also really interesting, with moss covering the roots.  The trunk style with a visible curve is called moyogi.  This would also fit into another category of bonsai, called bunjin-gi, of a long bare trunk with foliage on the top. 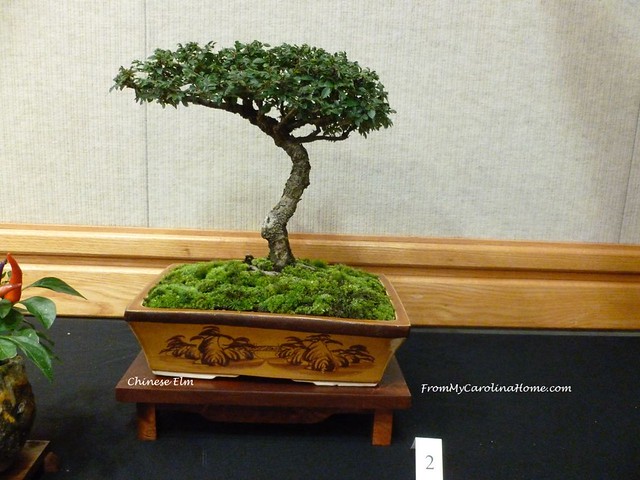 Another example of the triangle shape, the roots have been slightly exposed to show the forms.  The slant style called shakan is what most of us think of as the bonsai form. 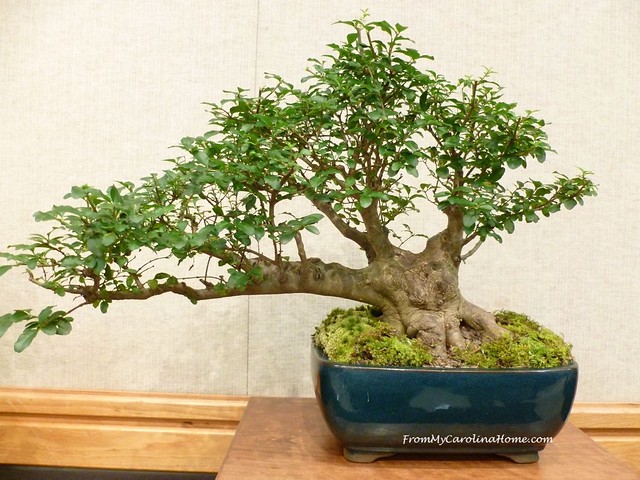 Several small Chinese Elms form a forest in this larger entry.  Tiny ferns adorn the forest floor, and the forest sits on a large rock. 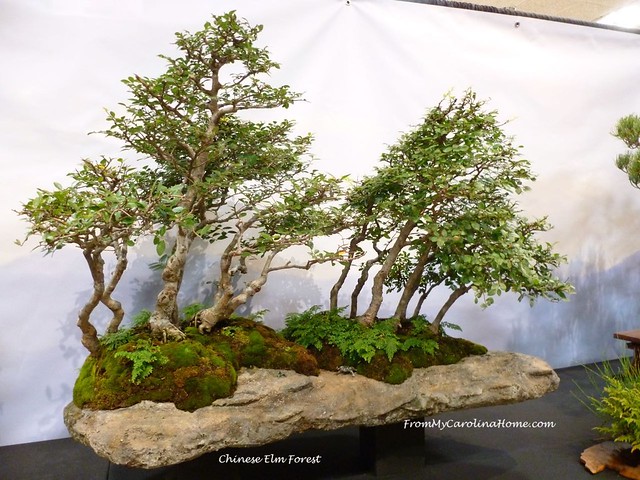 A Trident Maple gives the impression of a large mature tree shading a rock, but this entry was less than 12 inches tall.   This is a good example of the idea of bonsai, to evoke the feeling of viewing a much larger tree at a distance. 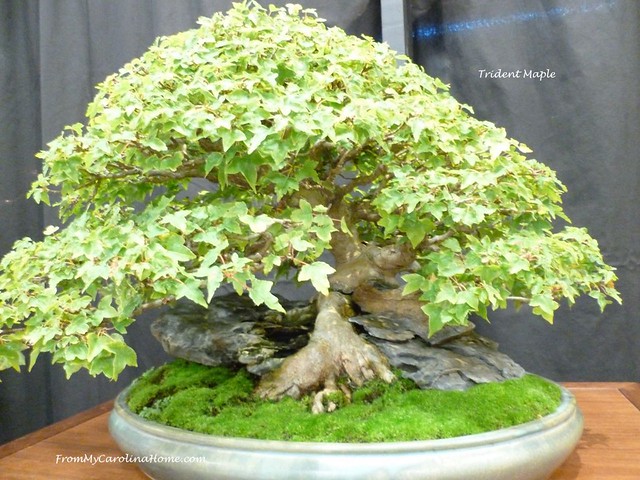 On the other side, this one was over 4 feet tall, also unusual for bonsai.  The shape is interesting, and the exposed roots add to the overall artistic quality. 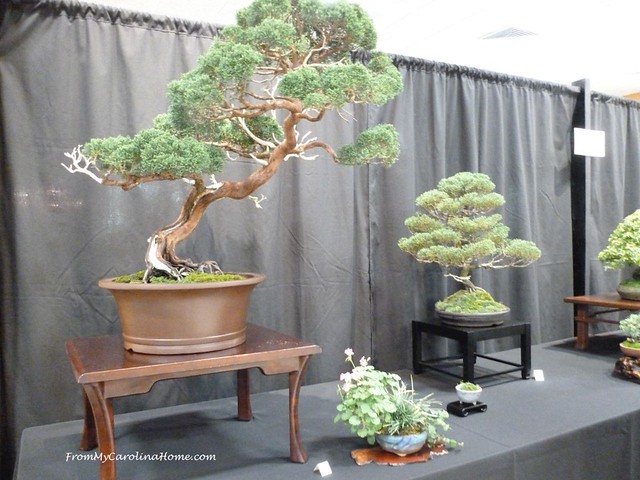 This display was also huge with multiple bonsai on a large piece of what might have been volcanic rock.  The forms and textures were amazing, and it changed as you walked around it.  The aesthetic quality of the piece was beautiful from every view point, another unusual aspect as bonsai is typically viewed from only one side.  One of the portrayals of bonsai is the struggle to survive, called sharimiki, where some of the roots are bare and some of the bark removed, incorporated here. 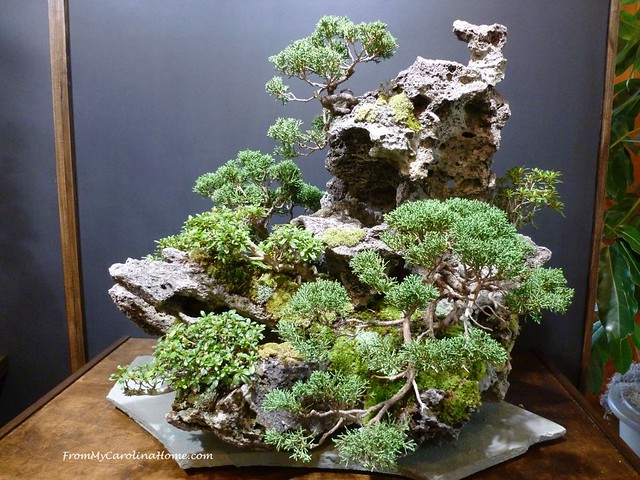 One last multiple bonsai exhibit had Korean Hornbeam and Cedar of Lebanon with small shrub and moss adorning a driftwood and rock base. 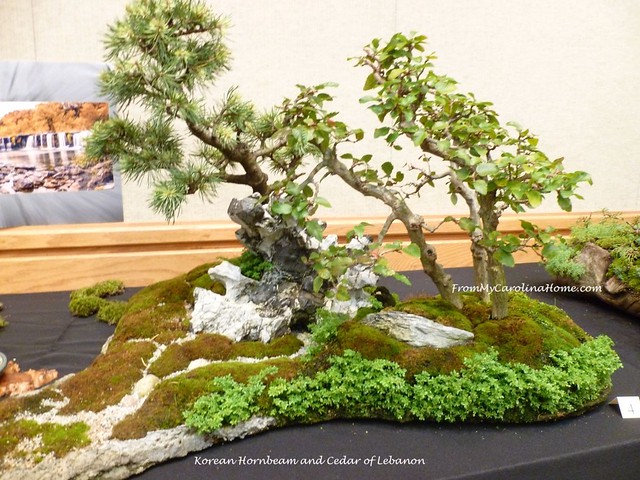 The NC Arboretum has a permanent exhibit of bonsai as well.  These need to be outside as much as possible as the constriction of the root systems in small containers makes them difficult to grow indoors.  They need conditions close to growing in their natural environment for temperature, direct sunlight and humidity.   Most bonsai are begun with small seedlings that can be trained and pruned, wired to assume a particular shape, and kept miniature size.  Maybe one day I’ll try this, but for now, I’ll be happy admiring the results of other gardener’s patience.

Meanwhile, back home in my garden, little bulb leaves are peeking out all over! I think these are hyacinths. I planted so many bulbs I am having a hard time remembering which I put where. 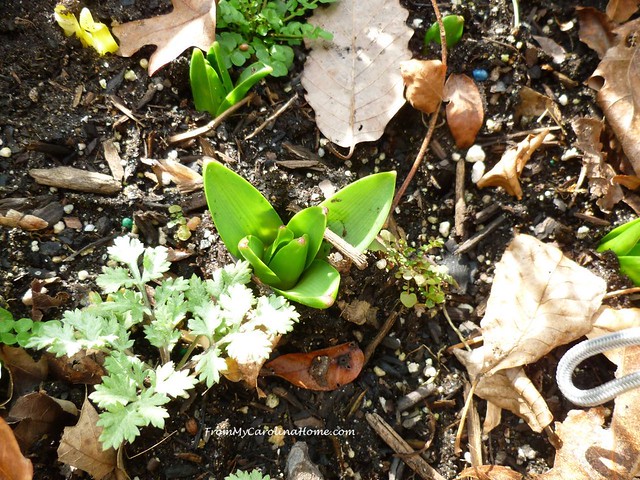 Crocus bulbs are waking up too. 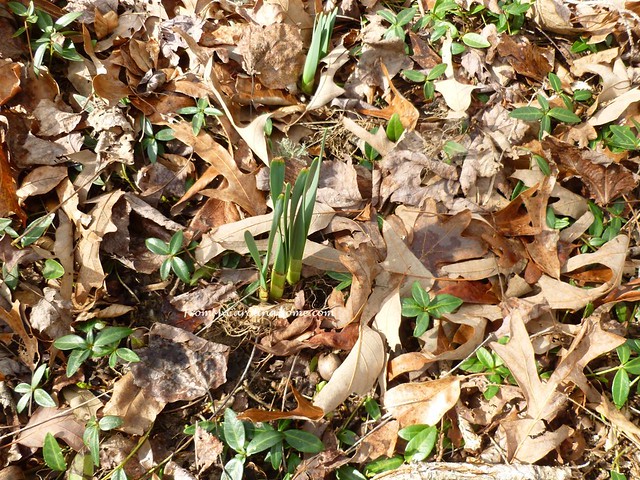 I think these are daffodils. 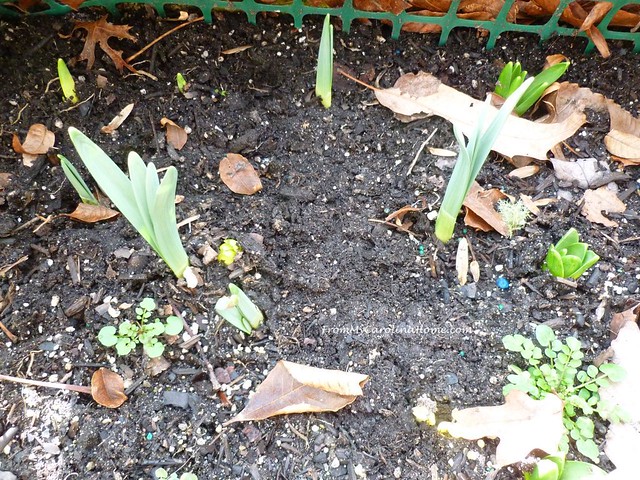 One of the hyacinths was put in a bulb vase to force inside. It bloomed in my favorite white, a small bloom but very fragrant. 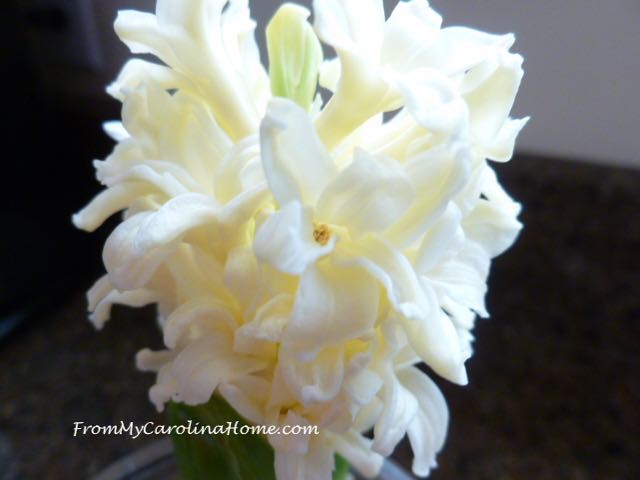 A warm day, and rain on the way made a gorgeous sunset. 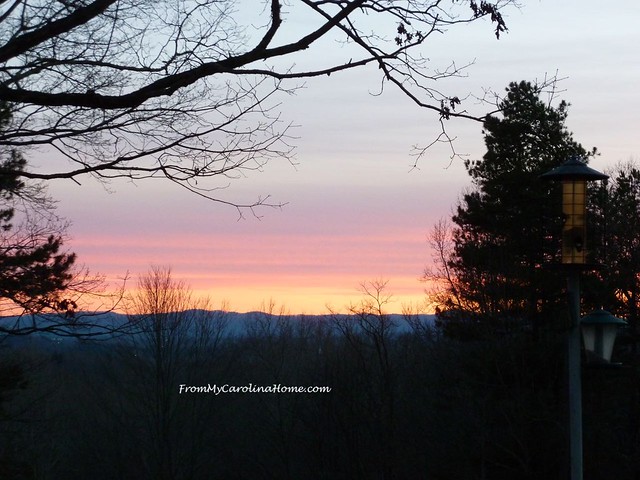 The turkeys are back, a group of seven – one male and six females – visiting regularly to scrounge a bit of bread. 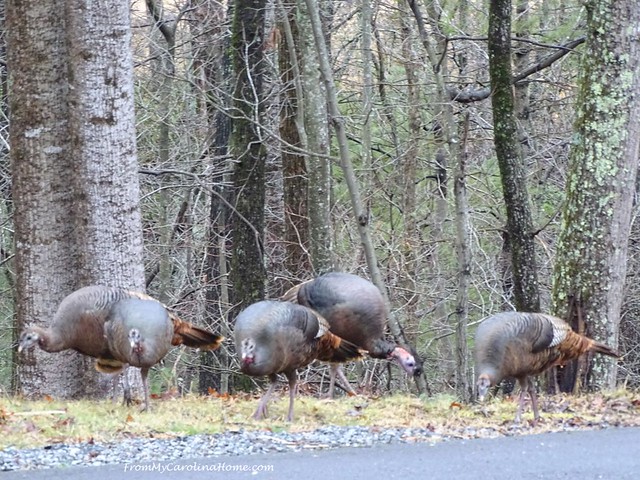 On this day, I noticed this beautiful fox watching the turkeys in the meadow. I tried to get a photo of them together, but as soon as I stepped on the verandah, the turkeys ran towards me. He sat regally, allowed his picture to be taken, then turned and loped into the forest. 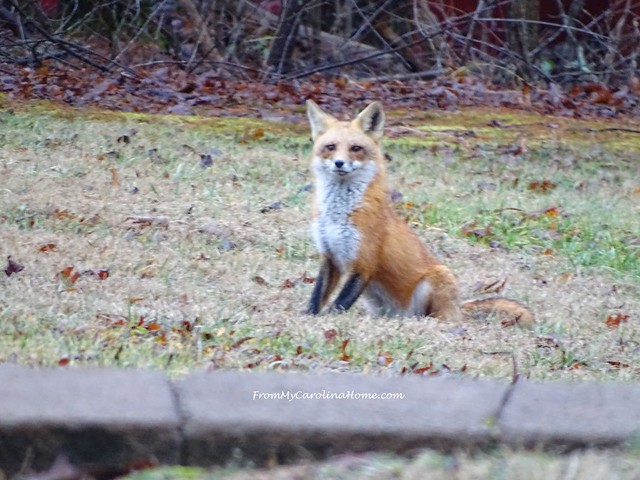 What is going on in your garden? Are you visiting your local arboretum? 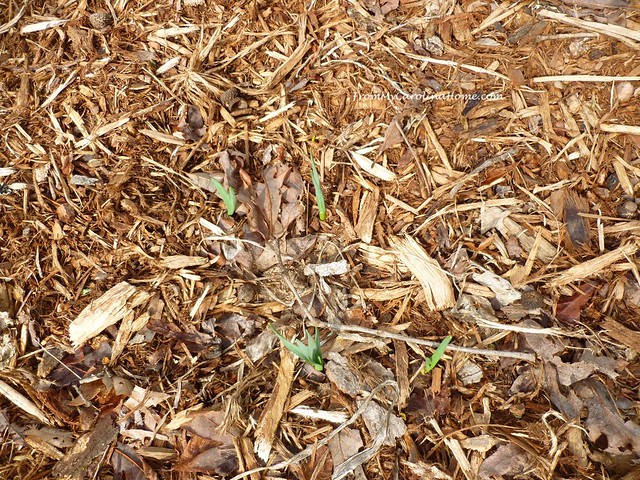