Over the past couple of weeks, more blocks and donations have been received, and I got to work to prepare for the first sewing day with friends.  I measured the blocks and divided them into piles based on their size.  The blocks ranged from 12-inches to 12-1/2-inches, with a fair number at 12-1/4-inches.  Thanks to you, dear readers, there are 298 blocks for the project! 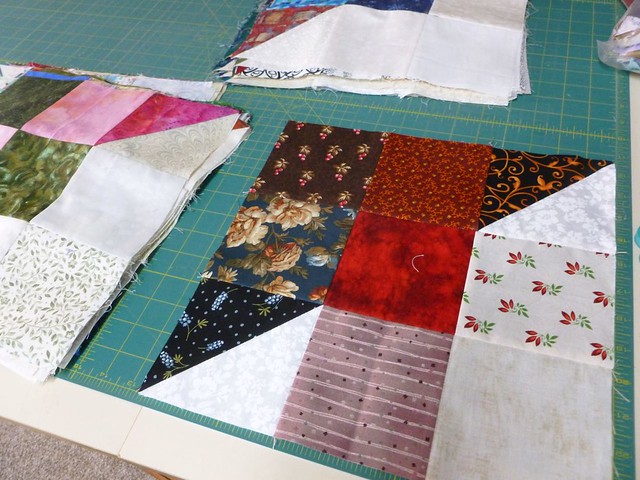 A few had some minor squaring up to do, easy to do and the diagonal lines in the pattern made this simple. 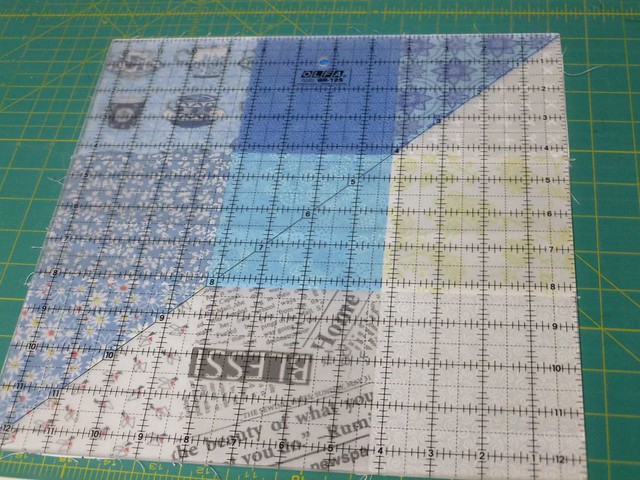 I tried to put similar blocks together in a variety of colors like ones with mostly white backgrounds, or mostly ecru/light tan backgrounds as I pulled three sets of 56 blocks to make the three quilts I have committed to making. The remaining blocks were bagged up, and labeled. 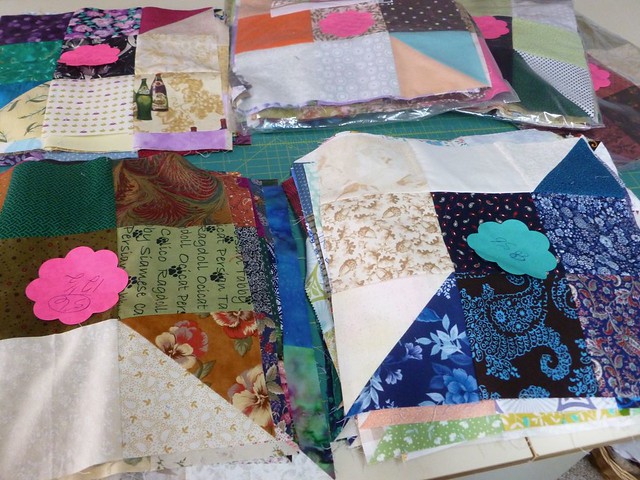 As more blocks came in, I kept mixing them into the stacks and changing things around. 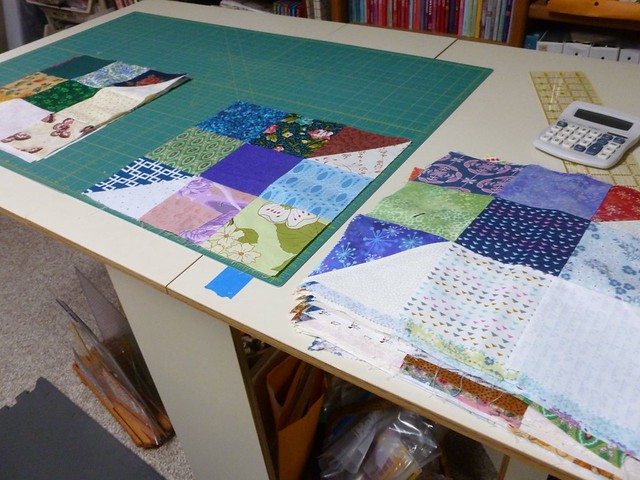 This fun fabric was donated for backing, and it was just a tad shy of what was needed now that I decided to use 56 blocks instead of 30 with sashing and borders. So I added a bit of white donated fabric to enlarge it just a bit. The fun print really says California, doesn’t it? 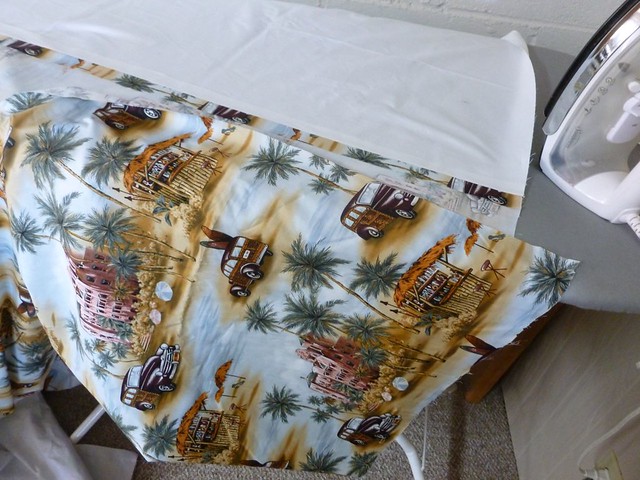 I pulled the first group, and began working on the zigzag setting, sewing dark points together in pairs, mixing up the colors. 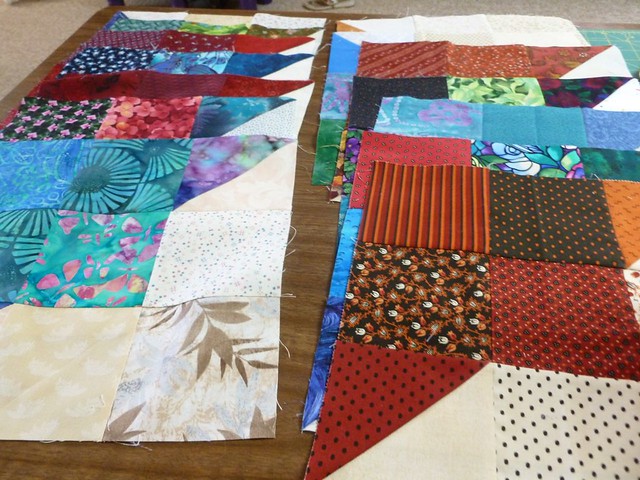 Each set was pinned at the patch points, sometimes turning a seam to the other side to get them to nest nicely. 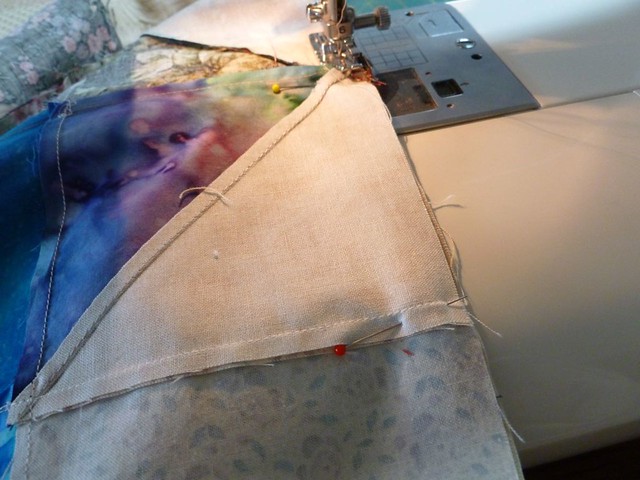 Then the pairs were put into rows. 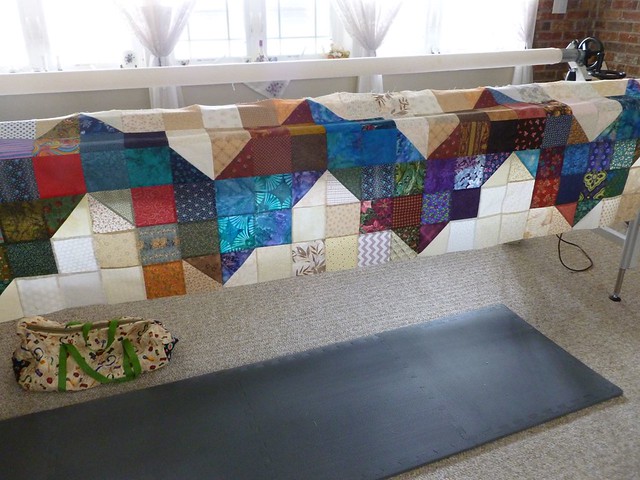 With each new row, I compared the blocks I had yet to assemble to the previous row done to try to keep the colors mixed. On this lineup, the blocks on the ends would be too similar to the ones above, so I rearranged them with other blocks. 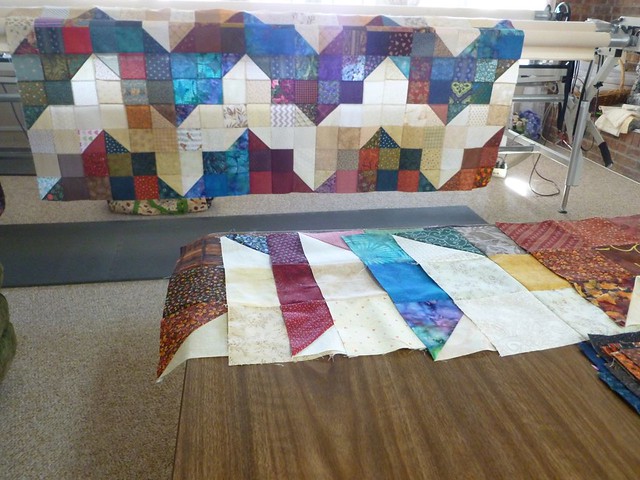 And the rows were sewn into a flimsy of seven blocks wide by eight blocks long making the flimsy 84 x 96 inches, a nice size. 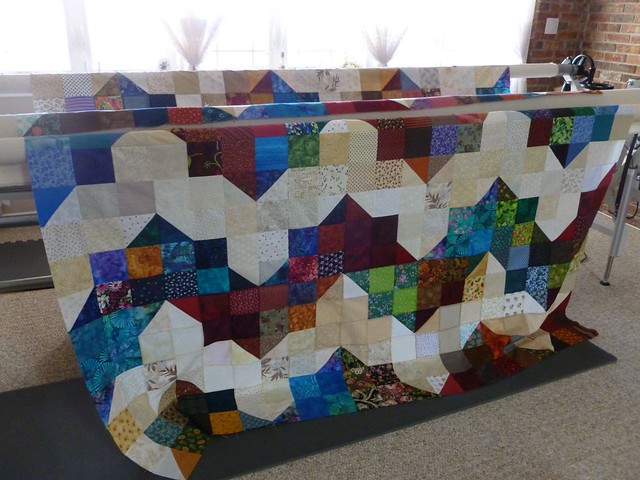 I loaded it on the longarm, with the idea of doing some of that quilting while friends worked on the next two tops. But best laid plans sometimes go awry.  The longarm was acting up, not stitching well, and I’ll tell you about that later.  It is an ongoing issue for now, and my expert tech support guy in the house (aka DH) has come to the rescue and is trying to get it fixed for me. 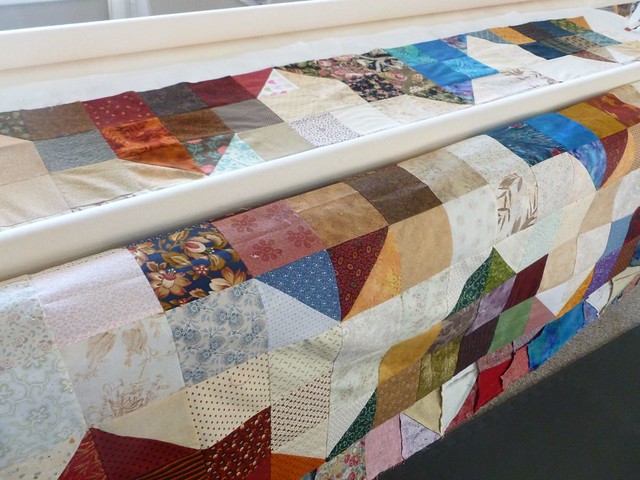 I got a lot of the piecing done during the January snow, you can see my hydrangea covered in snow outside the windows from about 2 weeks ago.  There was about four inches on the ground and on top of the railings, a white wonderland. 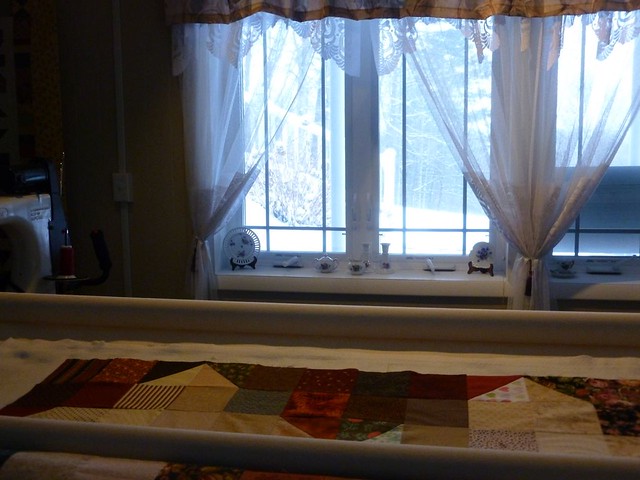 Their blocks were mixed into the stacks as well. If I have enough help, there are enough blocks to make two more flimsys after the three we are already doing. So, we might be able to send one or two flimsys ready to quilt to California. The yardages on the right of the picture below are enough to make bindings for two quilts. 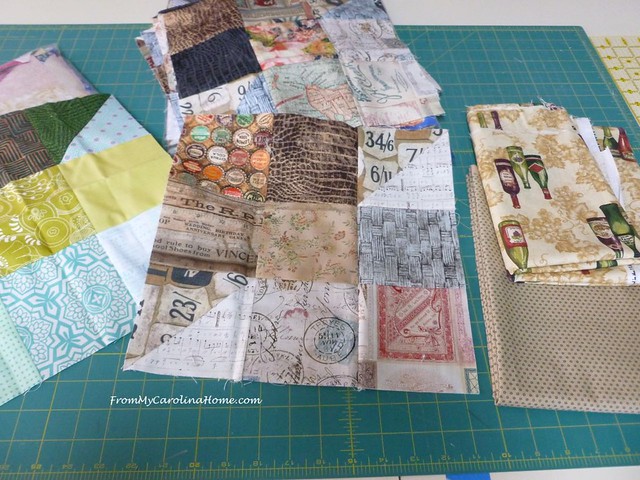 I want to acknowledge the awesome contribution of Backside Fabrics. I sent Christine an email explaining what we were doing, and she generously offered a substantial discount for two 3-yard pieces of wide backing for use on the next two quilts. I have no affiliation with Backside, I just like helping North Carolina businesses, and I am totally sold on their quality.  They are also quite supportive of events on my blog with nice giveaways.  Backside Fabrics has high quality wide backings, lots of sales and fantastic service with quick shipping. Thank you, Christine!!

Sew day with friends was yesterday, and I’ll show you what we got done soon.  Thanks so much to Marti S, Bonnie C, Carol P, Sam V, and Bridget O for willingly coming to Carole’s sweat shop to work their tuckases off on Tuesday.

New Precuts on Sale this week!  I am a FQS  affiliate, and may earn a small commission to support the costs of the blog from any purchases you make.  You can use your existing accounts, and there is no cost to you.  Thank you for using my links when you can! 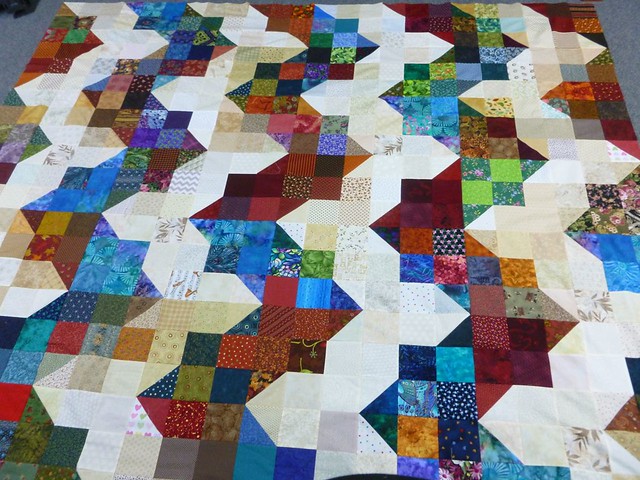 22 thoughts on “Assembling the First Blocks for the Fire Quilts”