For those of us who enjoy digging in the dirt, the cold part of winter is a time for planning. It is a time of thinking about what I’d like to grow in the veggie garden this year, and looking for some new flowers for the perennial beds. Long time readers may recognize this silver pot with the large bulb as my red amaryllis. It is coming up again, for the fifth year! I’ve never had one live this long, and I am excited to see if it blooms again. 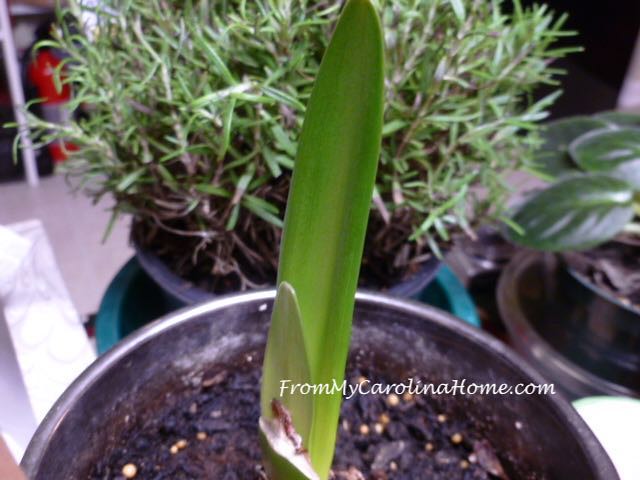 A couple of weeks later, and it is growing nicely, still no flower spike yet. 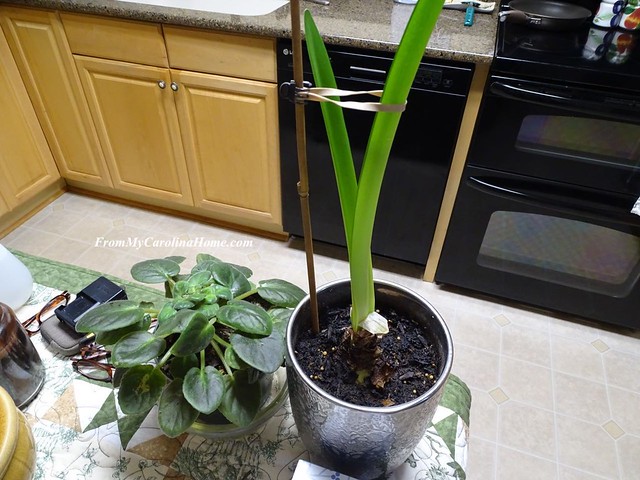 A gift from a friend over the holidays, I now have a rosemary plant. I have never had much luck with these, so I’ll be carefully tending it over the winter then planting it outside next spring. 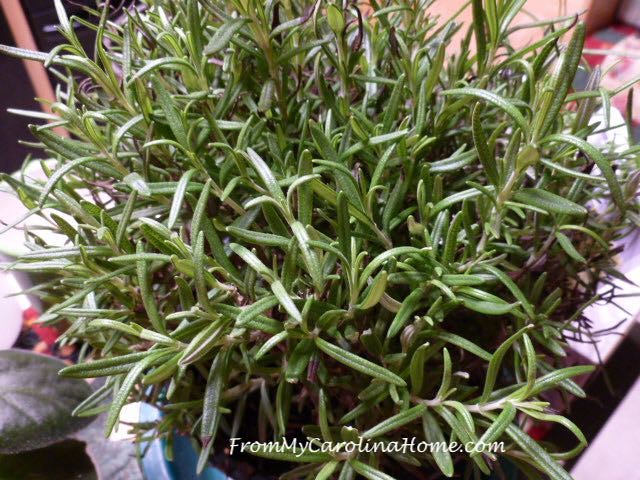 Caring for the plants brought inside is a bit of a challenge as we get so very little sunlight actually coming in the windows, only a sliver is available in the mornings. The entire front of our home is glass, but the large verandah overhang limits the direct sunlight except in winter when the sun is lower to the south. Pulling back the curtain early and rotating the plants that get the direct light through the window is a daily chore. Today, the white amaryllis, my rosemary plant, a succulent and a bulb get the light for about an hour. 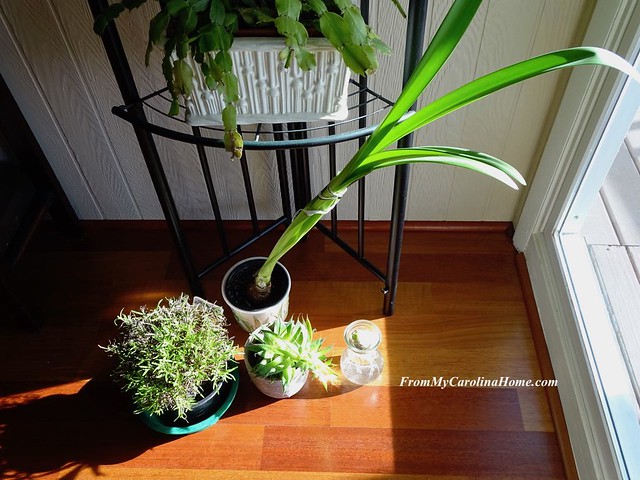 There aren’t many chores for January, especially when it is so bloody cold. It is a great time to sit in front of the fireplace and look at gardening books and magazines, read the Farmer’s Almanac, peruse the seed catalogs, and dream. 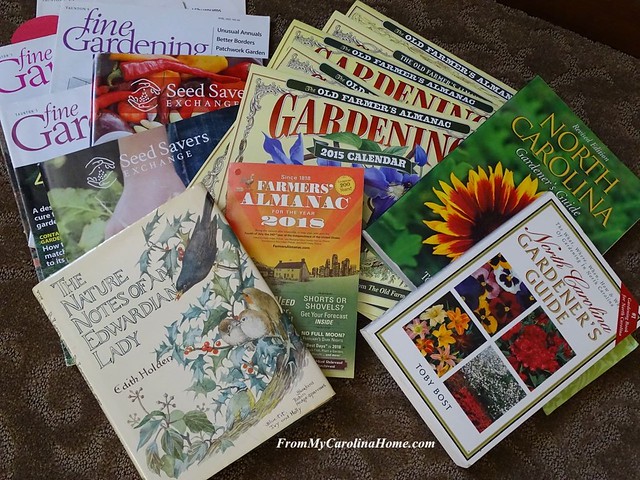 This book, Nature Notes of an Edwardian Lady, was a Christmas gift from DH. 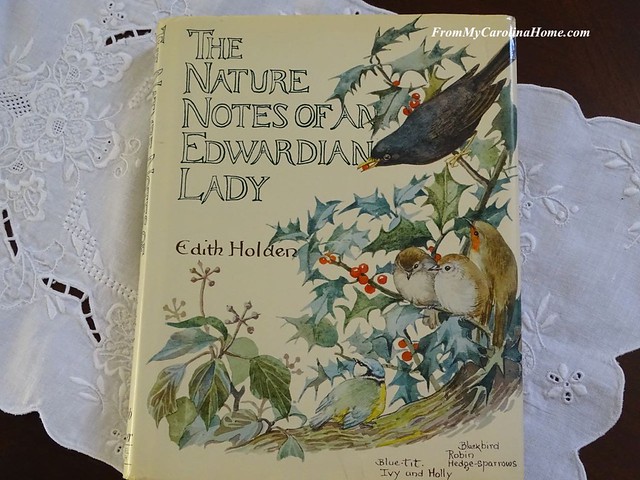 It is a totally charming book of poetry and art by Edith Holden. It is divided into chapters by month, and is just enchanting. 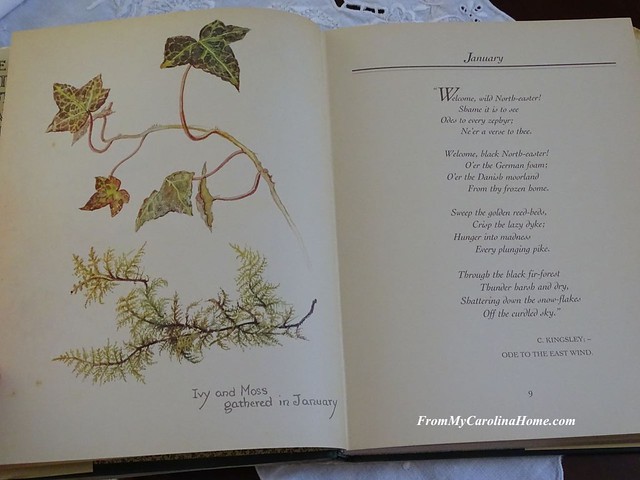 It is available at my Amazon link – Nature Notes of an Edwardian Lady. 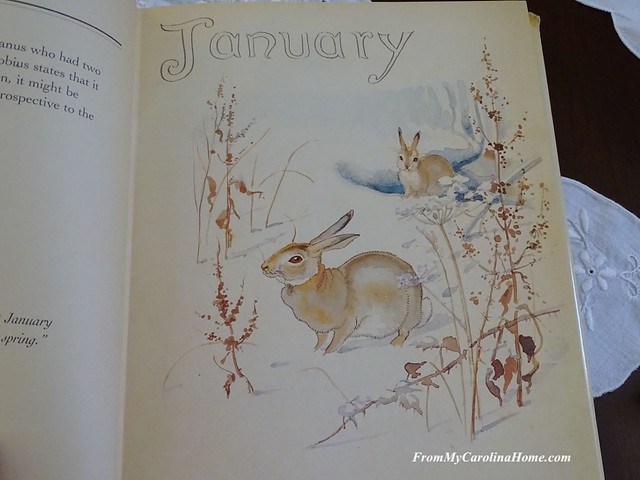 Before the new year, the turkeys came back for a short visit. I noticed them in the lower meadow, and stepped outside with some bread for them. They came running and I had to move fast to get a pic of them coming. This small flock has seven females. At this point in time, I had not seen a male for quite some time. 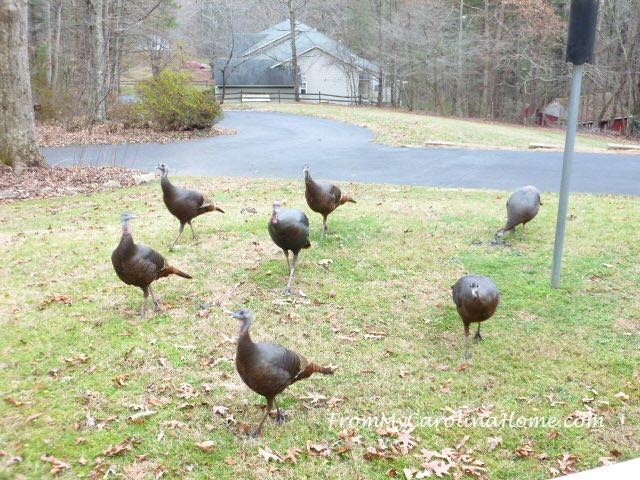 Bites of bread were thrown in different directions to make sure everybody got a few. They came back one more day, and then apparently moved on. 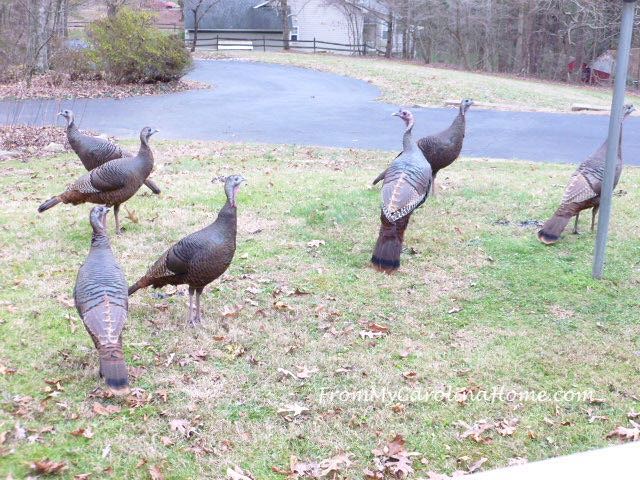 Sunsets are sometimes really lovely, when the clouds are still drifting by. Even as cold as it has been, the valley views are spectacular. 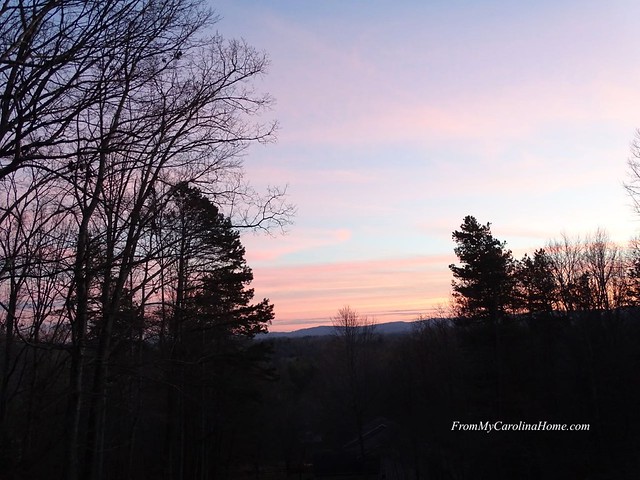 This cold has brought the birds in large numbers to the feeders. DH is having to refill them almost every other day. 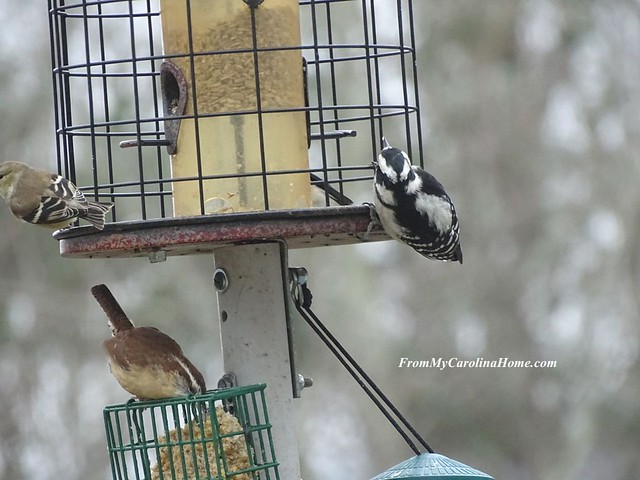 This larger woodpecker has figured out how to get some of the food, even though he is too big to get inside the cage. 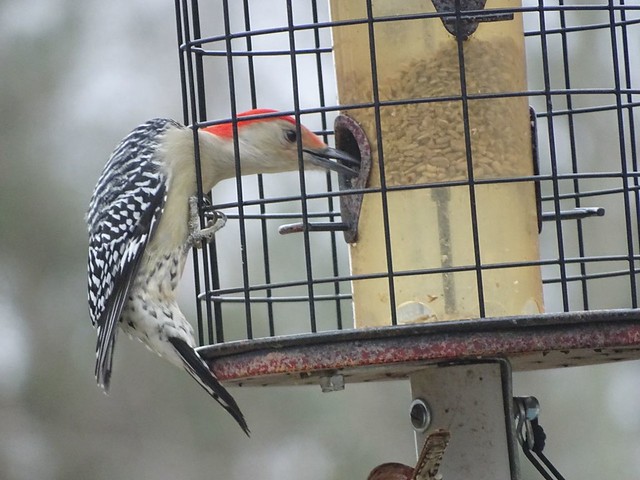 A flock of about a dozen goldfinches is taking advantage of the bounty, sometimes all of them will be on the three feeders at once, but that has proved difficult to catch in pictures. 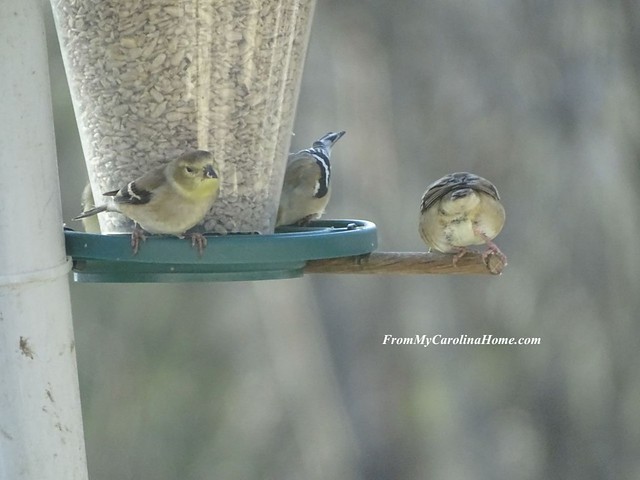 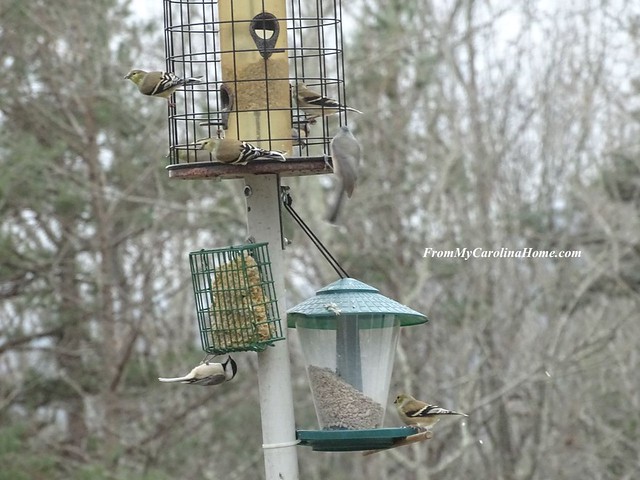 Some readers have asked about how I keep the squirrels out of the feeder, so here is the setup from a distance so you can see the whole thing. The top feeder is almost 9 feet off the ground, with the others hanging slightly below. The pole is far enough away from the house and the trees so the squirrels cannot jump to it. The baffle below is a tube baffle to prevent them from climbing up the pole.  We remove the lower feeder and the suet feeder in the warm months to keep the bears from getting them.  But they are hibernating now, so we can put more food out for the birds. 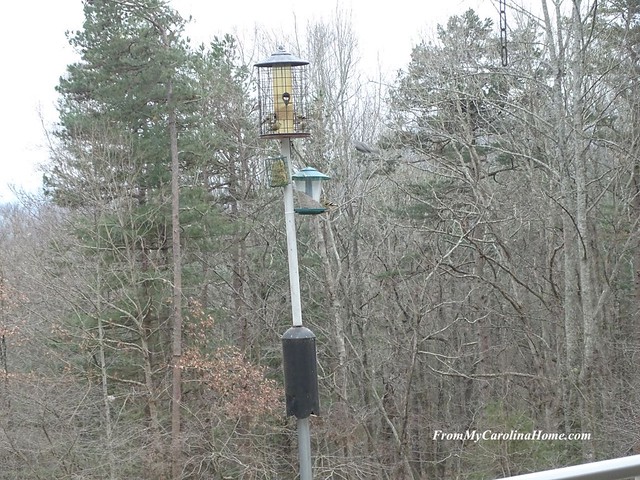 It is available on Amazon – Audobon Torpedo Steel Squirrel Baffle. 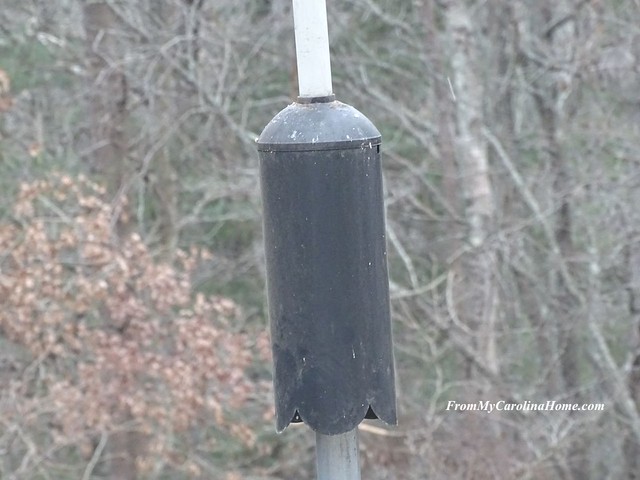 The female cardinal is coming regularly, she doesn’t migrate so she depends on our feeder.  The male often comes by to eat too, and sometimes they come together. 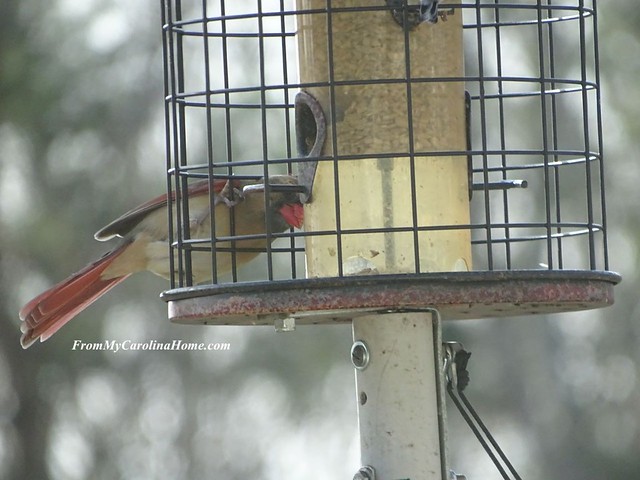 I have a head start on the veggies with the seeds saved from this year’s crops and meals. See how I saved seeds Here.  The Farmer’s Almanac says the best days to plant seeds for indoor head starts will be February 5-7, so I need to set aside some time then to get the grow lights cranked up and the potting soil ready. 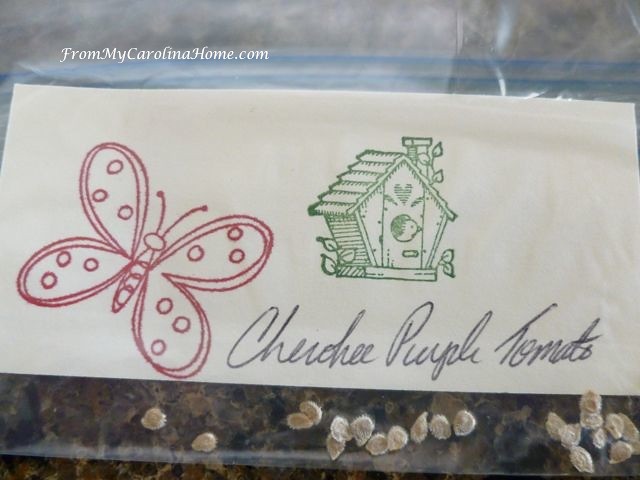 A couple of days ago, this young male turkey paid us a visit.  He may have been here before, as he readily began to cluck-purr when he saw me come out with a bit of bread for him.  I am hoping that the flock will return soon. 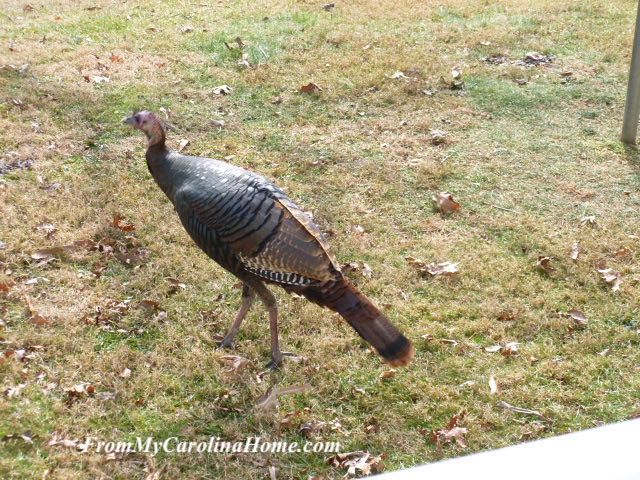 Back inside, when I planted all the bulbs in October, I held out a hyacinth bulb to force indoors.  It has taken it forever to root, probably because it wasn’t chilled for forcing.  But it has finally made some long roots into the bulb vase, and is beginning to look like it is going to put up a flower.  There is a second little stem coming up from the bottom and side of the bulb, and I go back and forth as to whether or not to pinch that off.  On one hand, it might be taking energy away from the main bulb, but on the other hand, it might grow enough to create another separate bulb for planting.  Would you keep it? 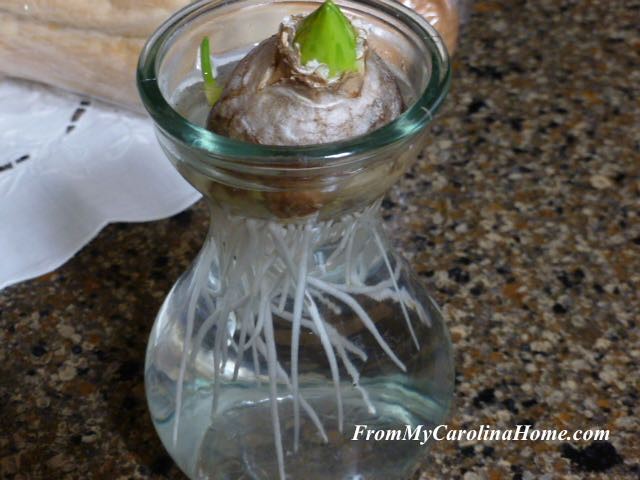 What is going on in your garden?  Gardens must be getting lovely for readers ‘down under’ in NSW, New Zealand, and Australia.  Are you in a planning mode?  When do you plan to start your seeds?