December mornings have been cold and grey these past few days. Fog in the valley shows the layers of hills between our mountain and the next ridge.  This might have to become my header photo for winter. 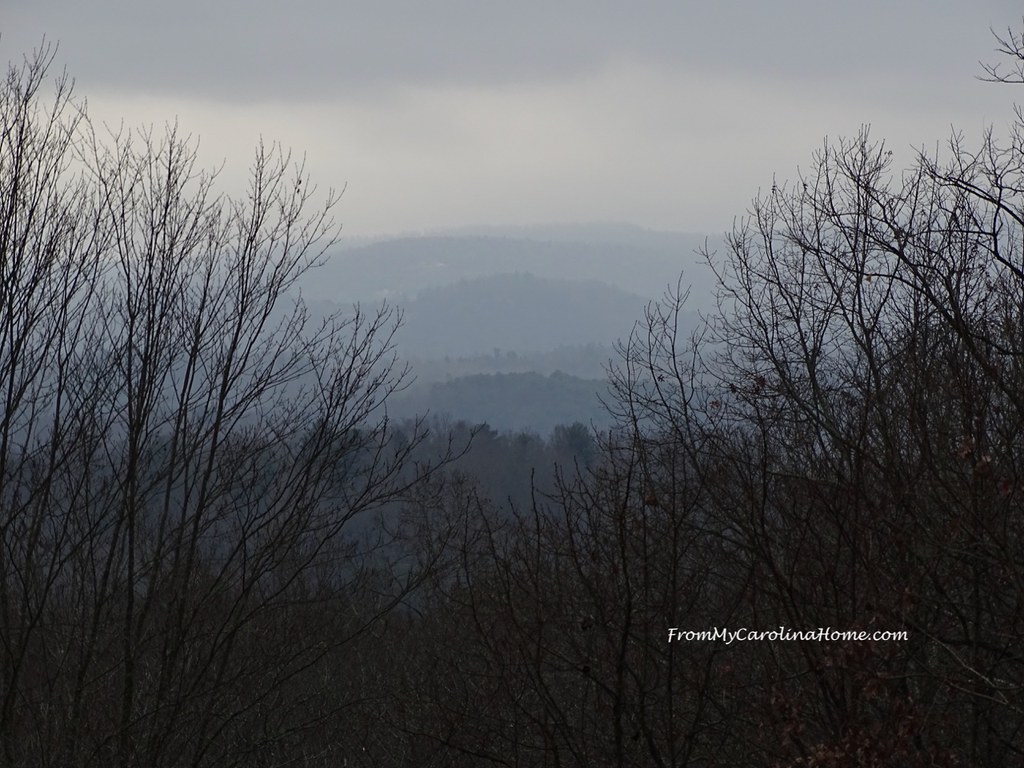 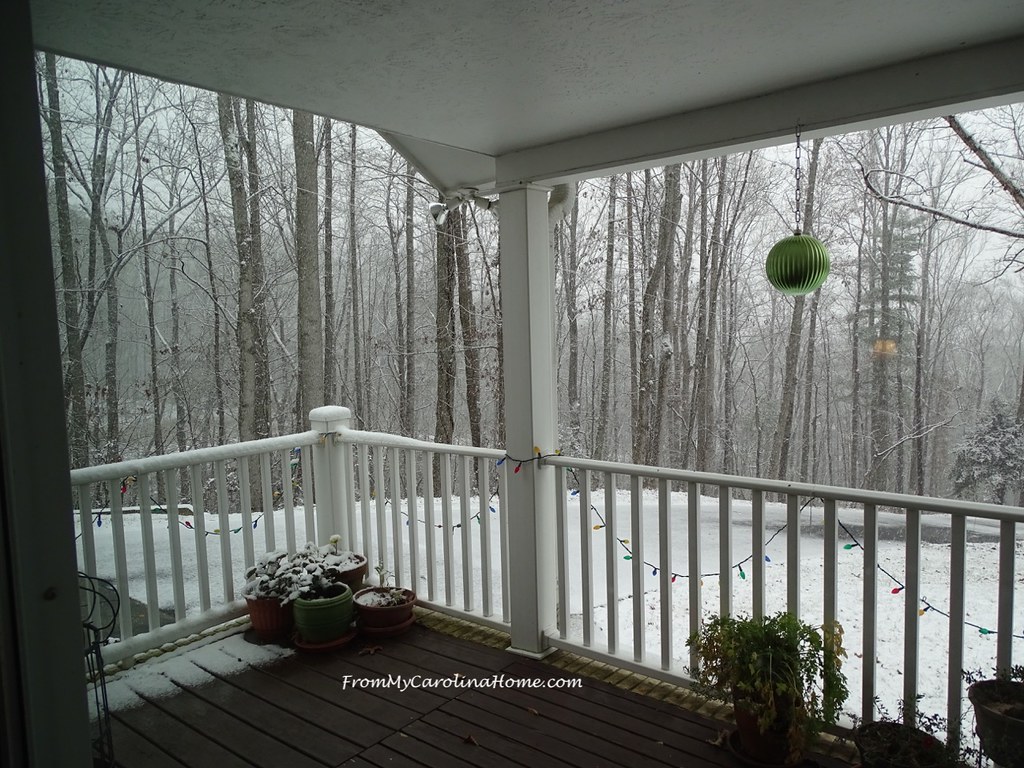 I watched the bird feeder for quite a while, as they came and chowed down. 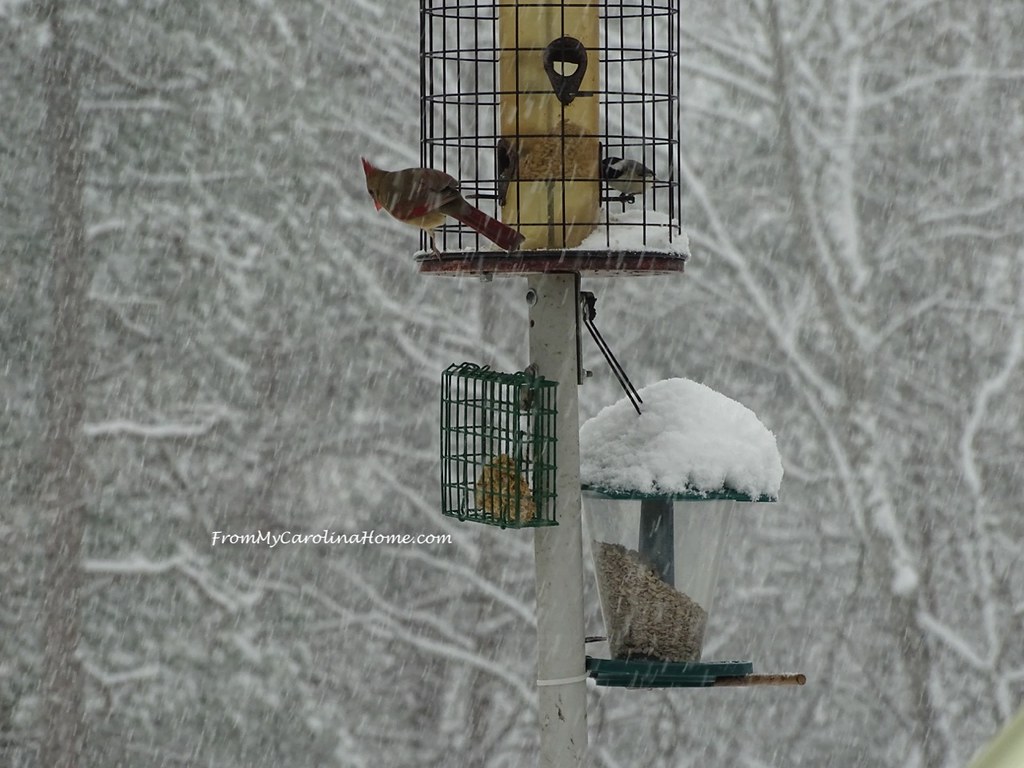 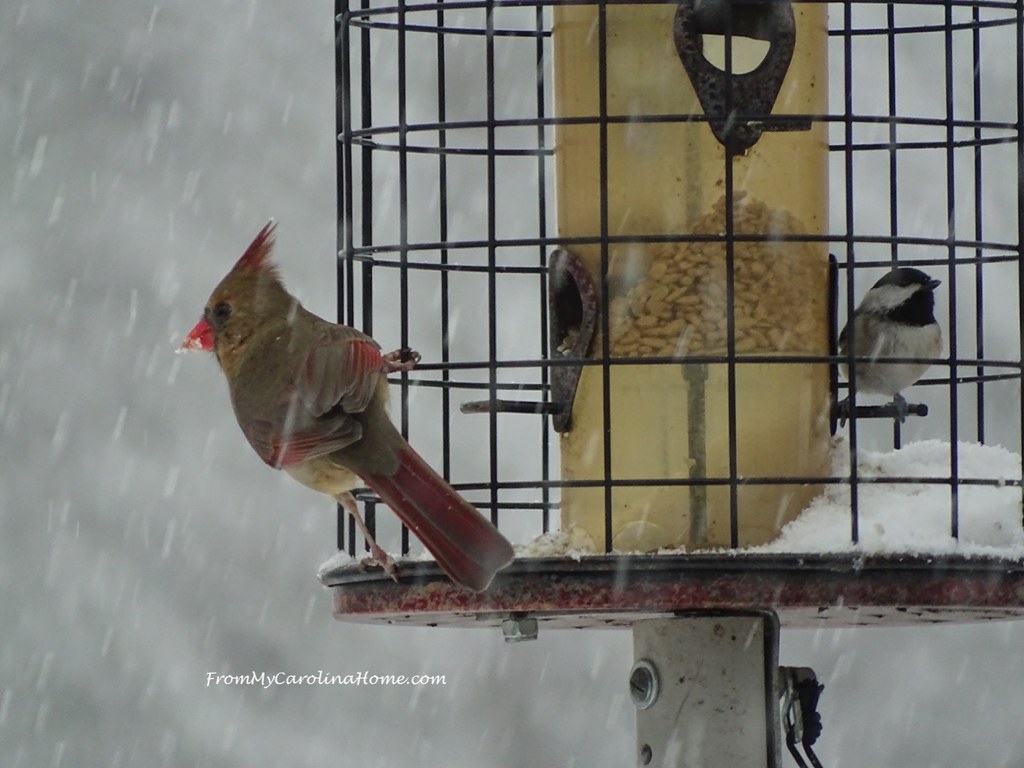 A bit later, the patch of clear pavement on the driveway was gone.  The pile of snow on the post is a bit taller too. 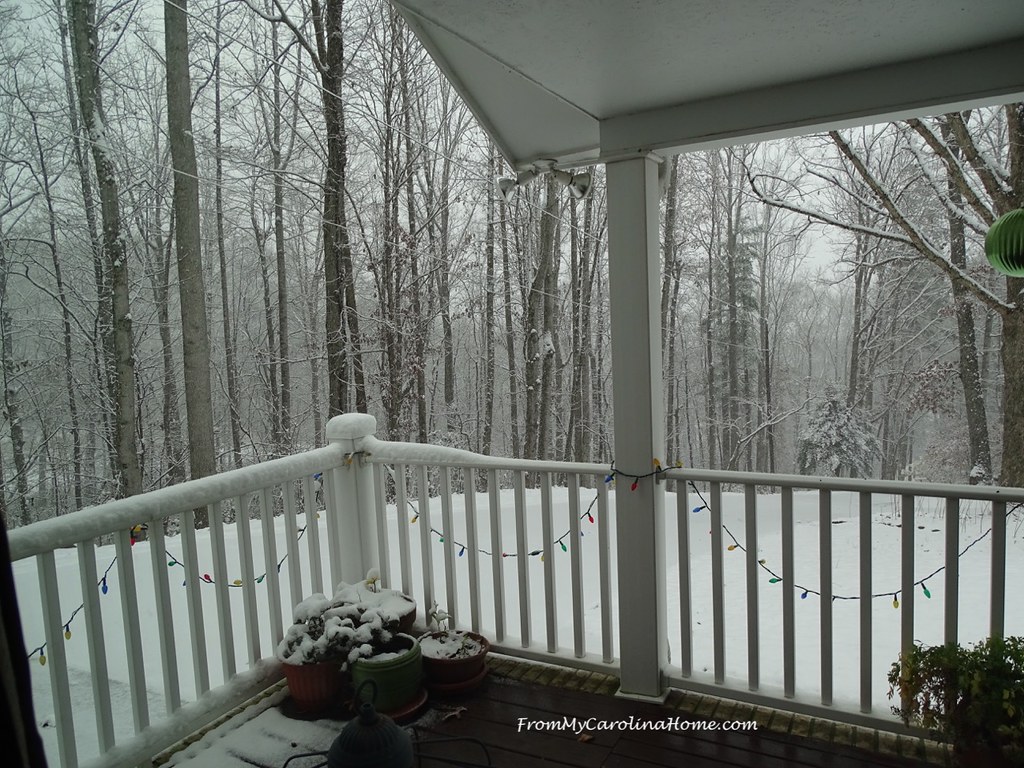 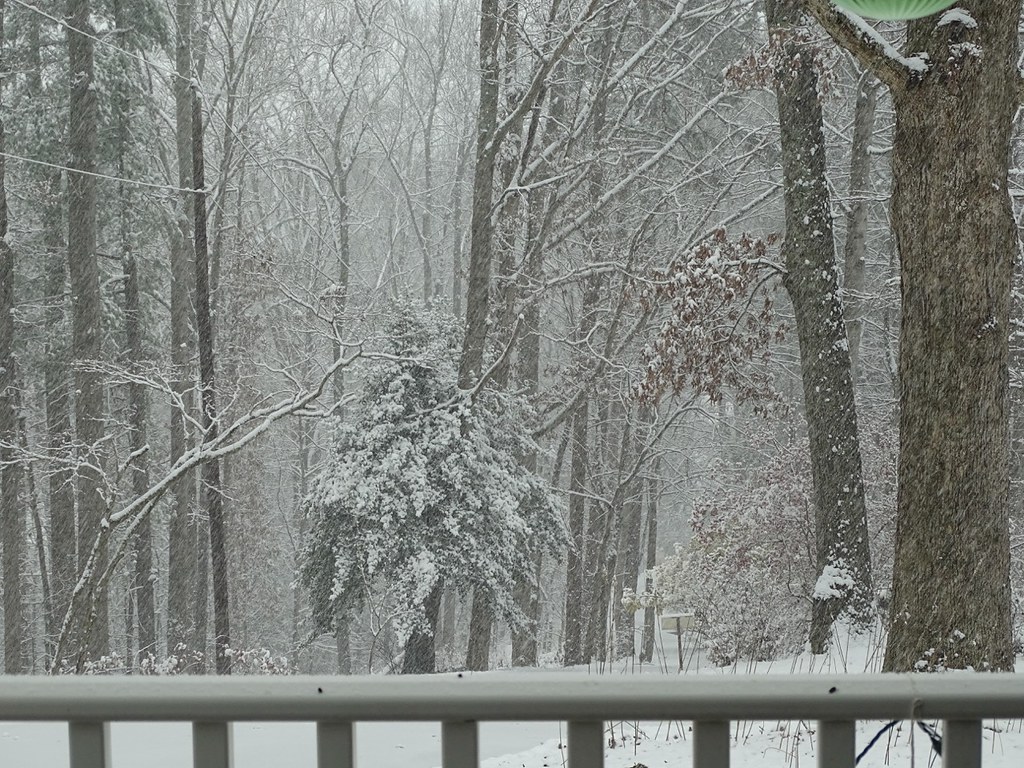 The birds kept working on the seed, and the suet cake. 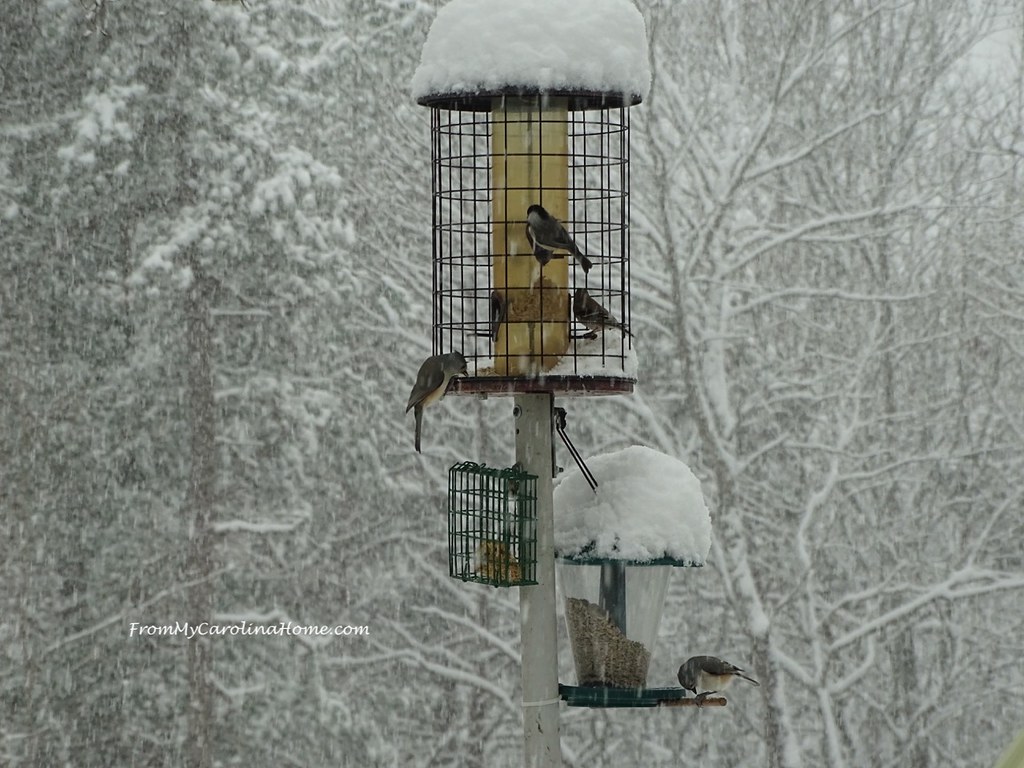 By mid-afternoon, we had somewhere between 4 and 6 inches, depending on where you looked. 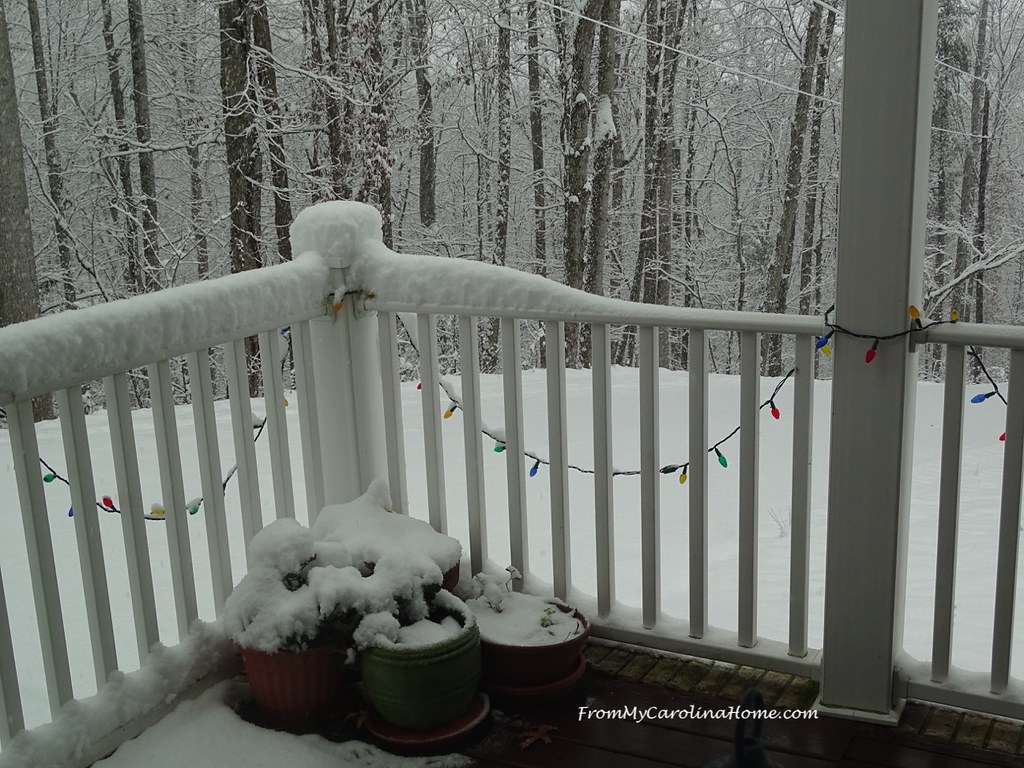 Beautiful serene and quiet, here is the snow on the rhododendrons in the back. 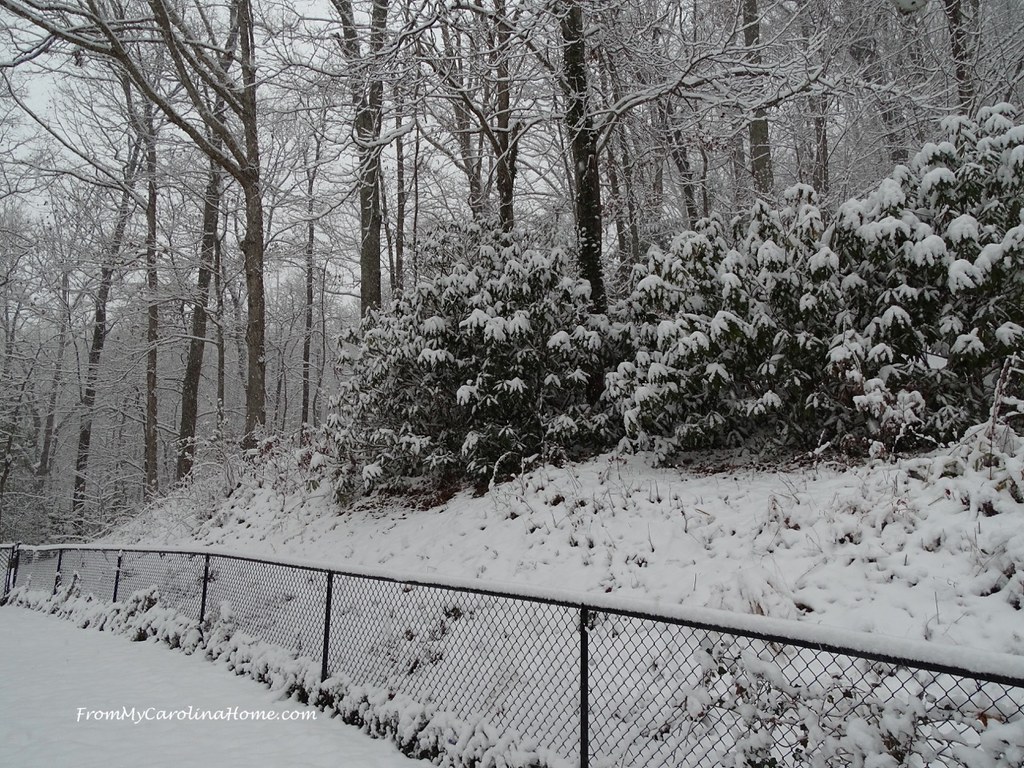 The road going down the mountain has not been spoiled by any cars, too dangerous to try. 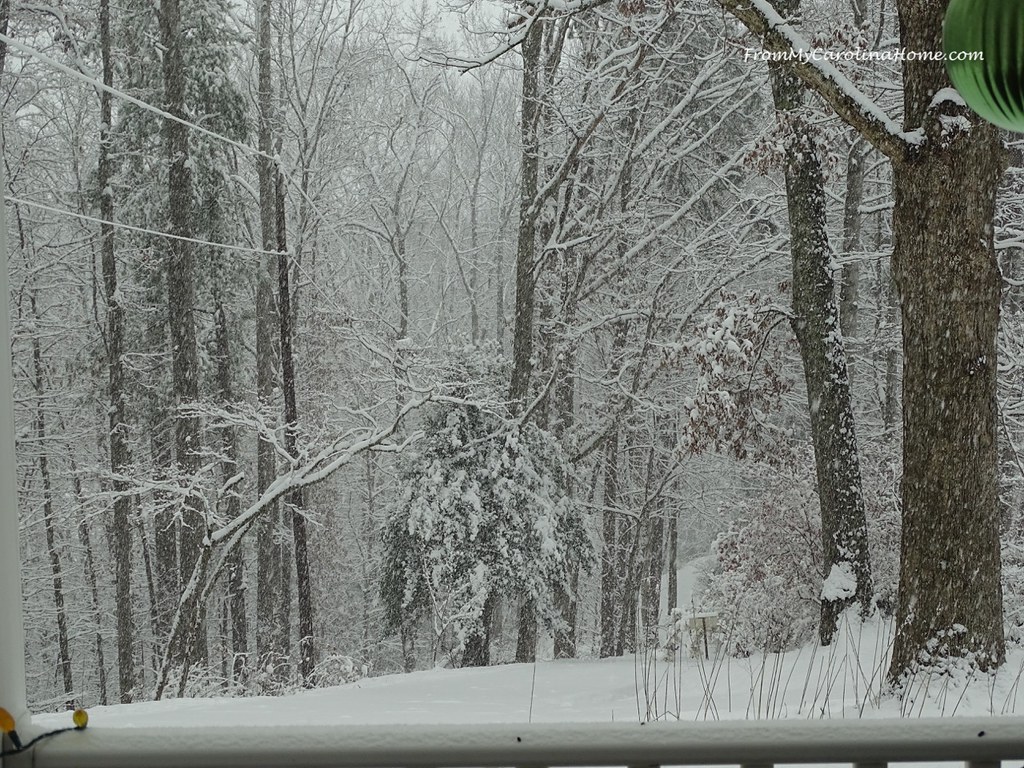 We are snug and warm, with a fire going in the fireplace, turkey and dumplings for lunch, and Christmas movies on TV.  Plus, being ‘snowed in’ means I can sew to my heart’s content.  The snow on the branches is captivating, I cannot stop taking pictures of it! 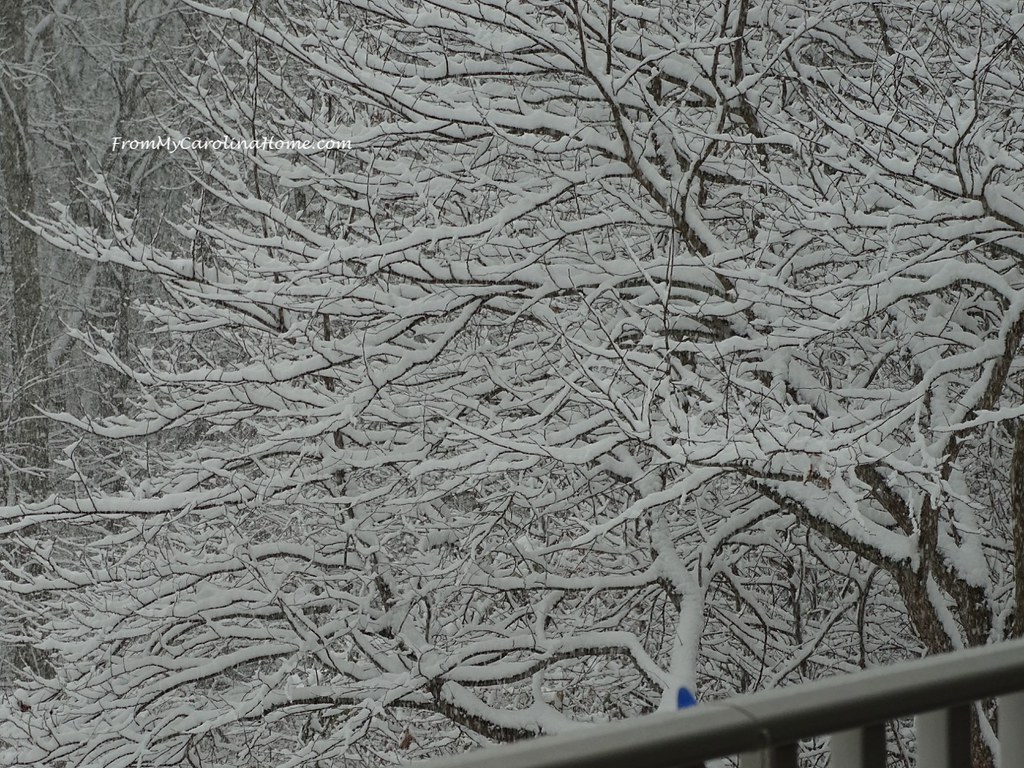 But, elsewhere in the garden in December, my white amaryllis bloomed. Beautifully! Four spectacular Apple Blossom blooms in white with a blush of pink. 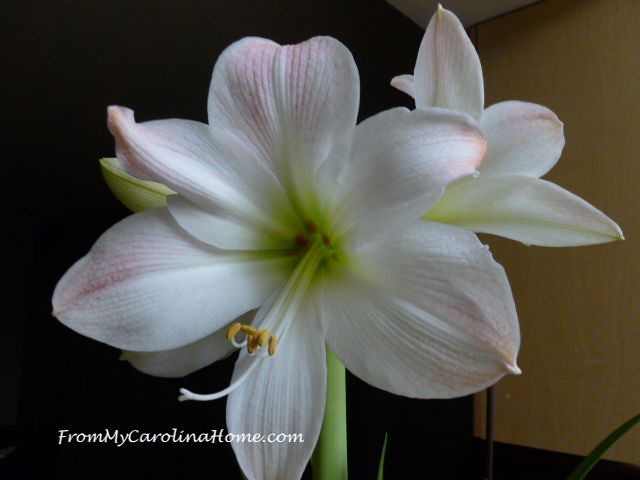 And the most exciting thing, the red amaryllis that has bloomed for four years, is starting to put up a leaf shoot. This will be the fifth year if it blooms again! 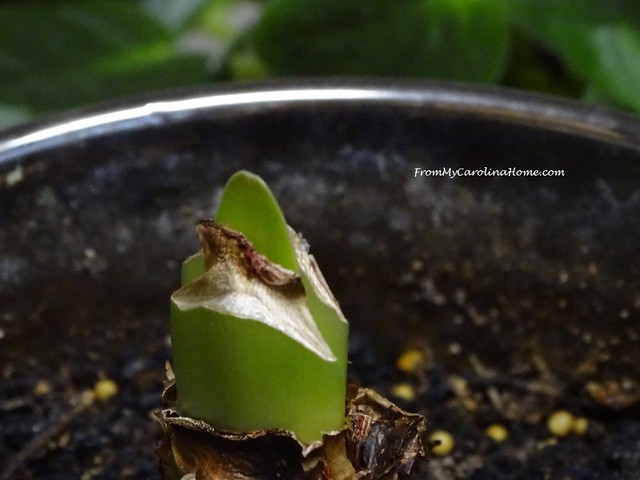 Did you see the Super Moon this week? 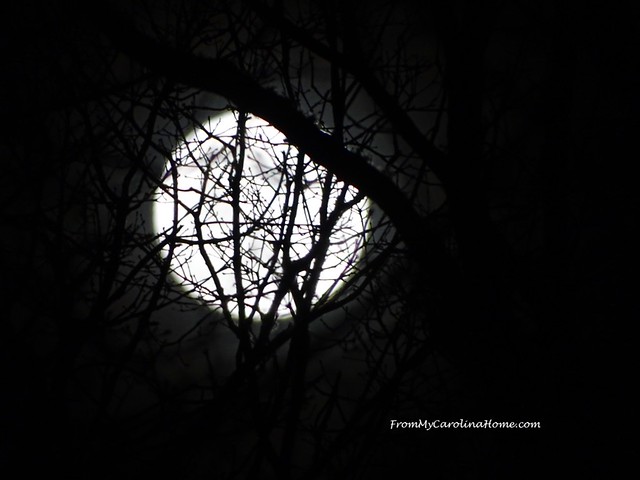 Before the snow, the deer came by again. There were three in the front of the house. 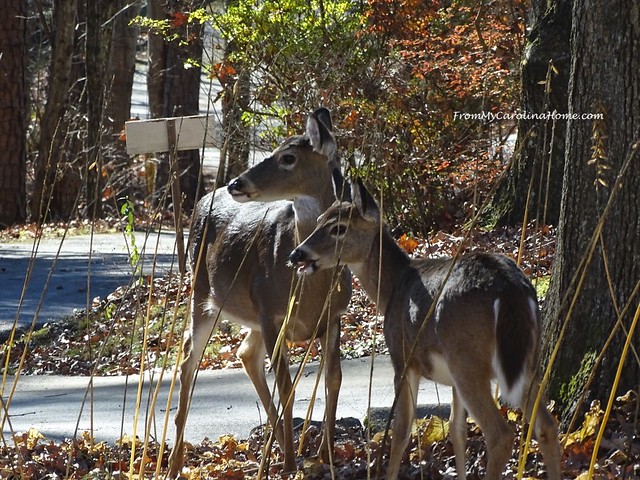 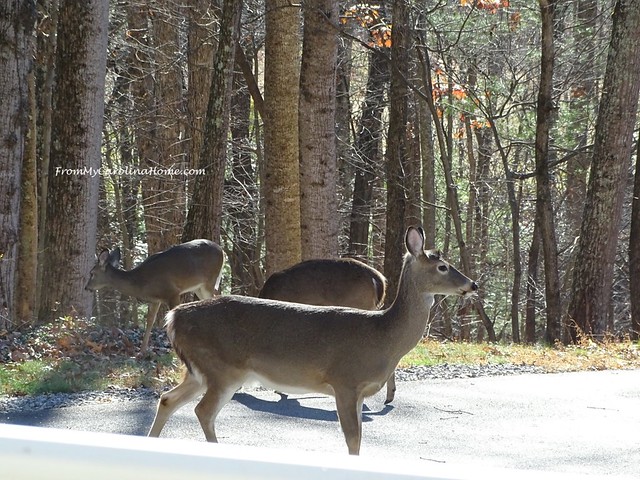 And these two were in the back at the same time. 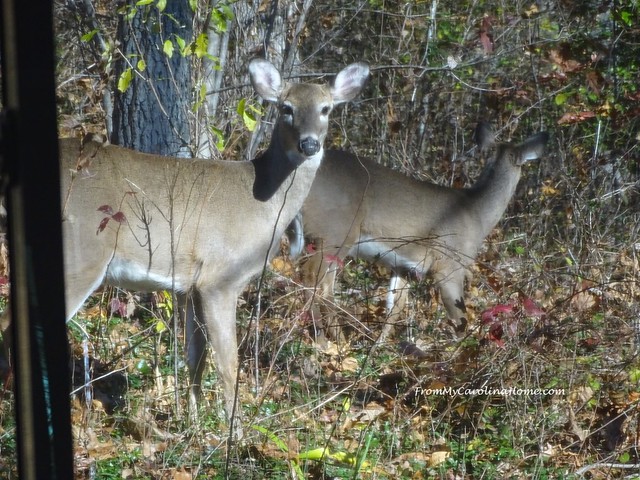 Another picture a few days ago, the dawn light was gorgeous with the orange in the sky. I wish I could have gotten a really good photo of it. 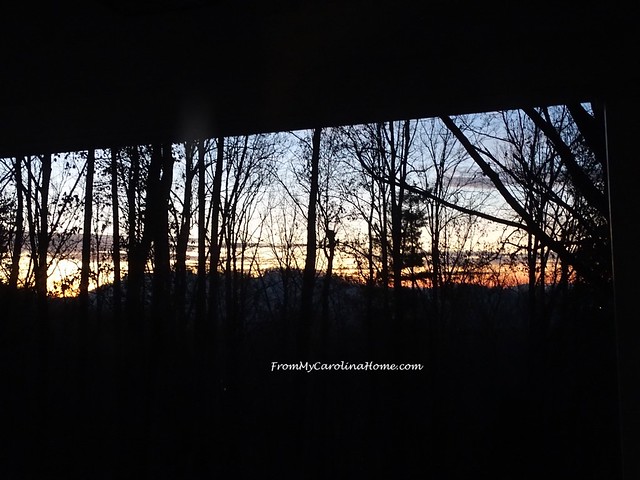 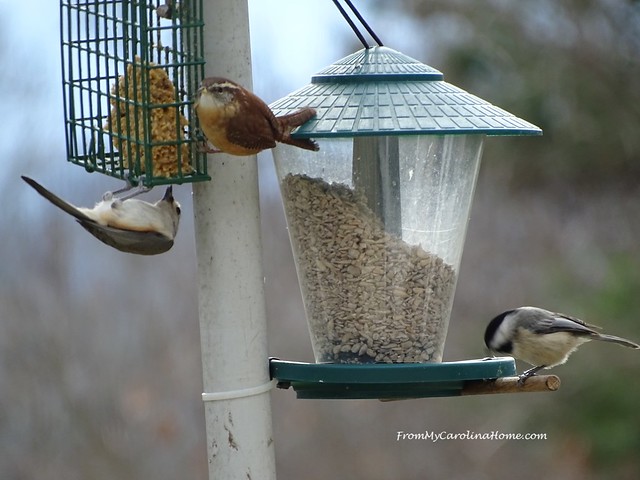 A few days ago, the leaves were finally gone from the trees, and the mountains next to ours could be seen. 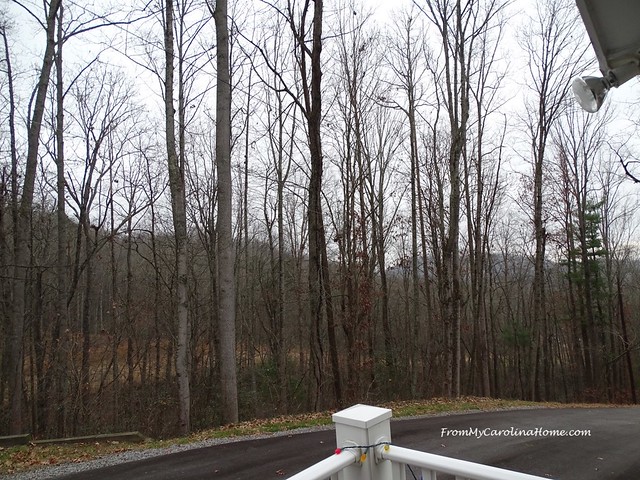 Now, today, everything is covered in white, and the low clouds almost obscure the mountain view. 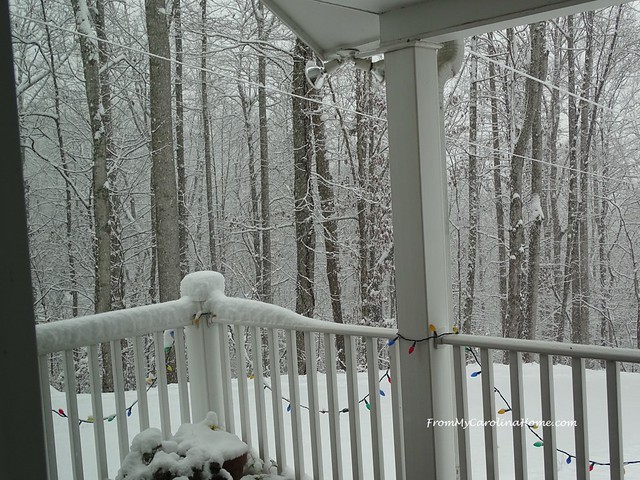 One last look at the rhododendrons. 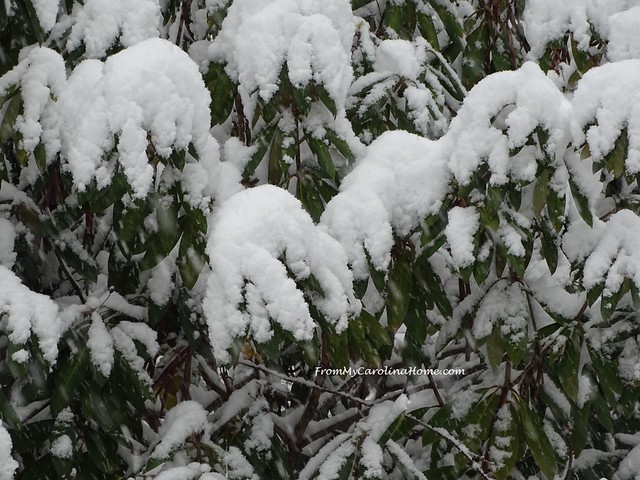 Did you get snow this weekend?

P.S. If you have time, go see The Man Who Invented Christmas, and take the kids.  We enjoyed it!

32 thoughts on “December In the Garden – Snow!”