Our weather has continued to be warm through most of the month, not really getting chilly at night until this past weekend. But I know that the garden is winding down, most of the flowers are done. It is time to prepare for some things to come indoors for the winter. One of the plants I want to keep over winter is this schefflera, and it was getting potbound. It was a gift, and I had not paid any attention to it other than to set it out on the veranda and water it. So it got a bigger pot. 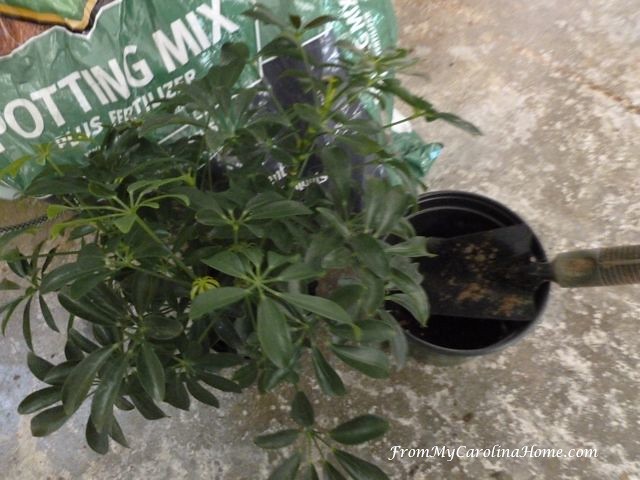 While it was still nice outside, I wanted to dig up more of the day lilies. I was going to a quilt retreat early in the month and wanted to give some away to friends. So I dug up two more big clumps, divided them, and put them in bags to take with me. 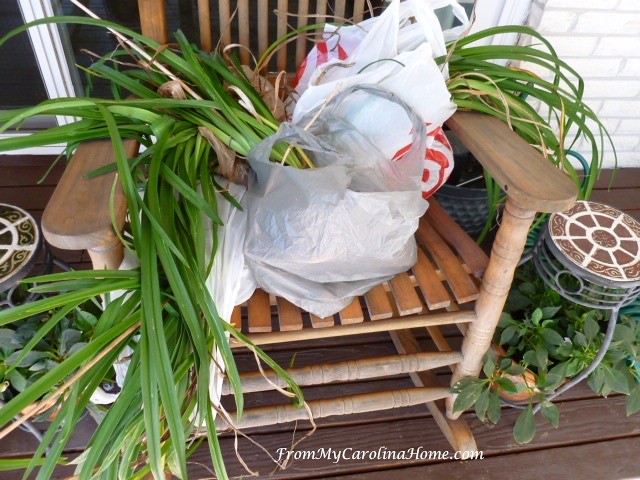 So, the brick planter in the front looked like this last summer, full of two colors of day lilies. This was one end…. 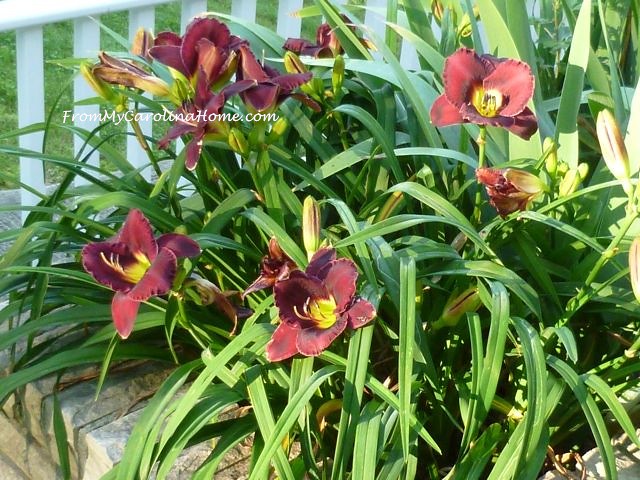 and this was the other.  Between these two clumps of day lilies were several purple iris plants. 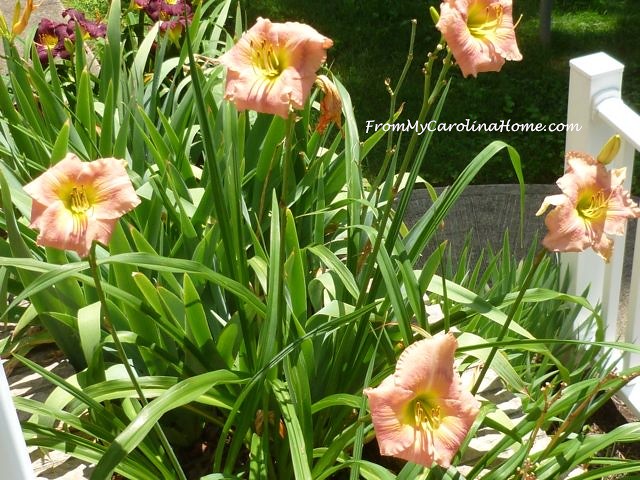 After I dug up the daylilies and the irises, I planted two perennials on one end. They are miniature asters. I haven’t had these before so will see how they do. 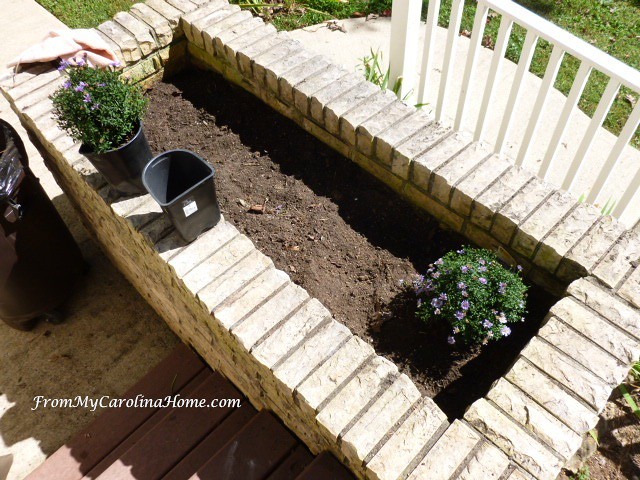 I got them on the bargain shelf at the garden center for 50 cents each. 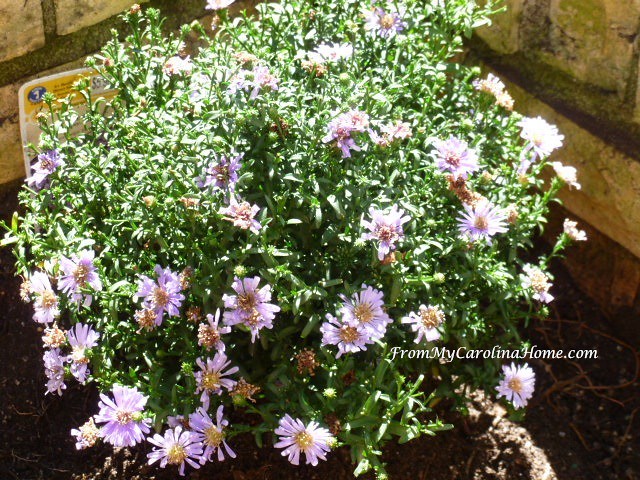 I also needed to make room for these, a bag of irises. They were picked up from a gardener friend who got three times this amount on a free giveaway. I don’t know what color they are. With my luck, they will be purple, LOL, since I am already overrun with that color. I really hope they are white or yellow. But, I won’t know until spring. They went into the brick planter on the other end until I know what color they are.  If they are purple, I’ll dig them up and give them away next summer. 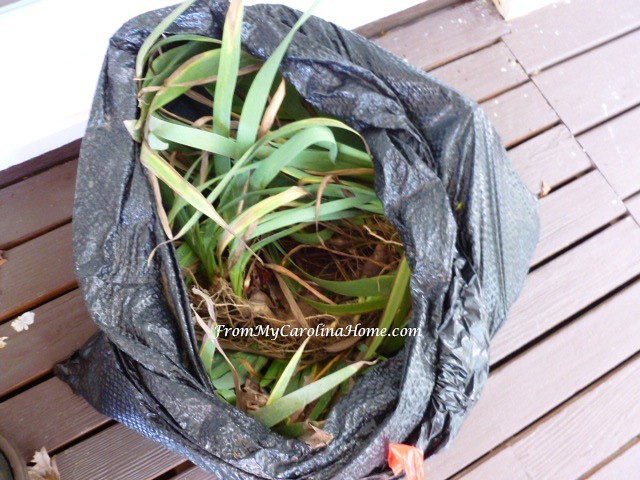 Believe it or not, I still have tomatoes growing. Some larger ones I just had to pick and bring inside to the window to ripen. There are still over a dozen really small ones that may not make it to maturity. But, I’ll leave them there for now.  I am still not happy with my tomato pie recipe, but DH has asked that we take a break from that particular recipe for a bit.  So, I am shelving any further testing on that one until next tomato season.  Not to worry though, I have other recipes ready to share in November. 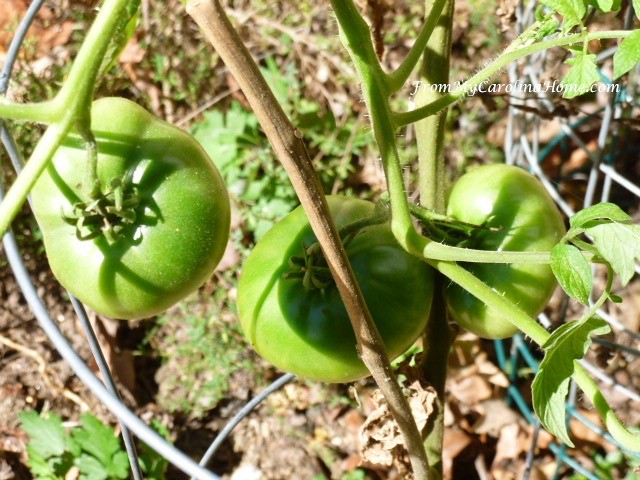 One more hydrangea, and these will be done for the season. 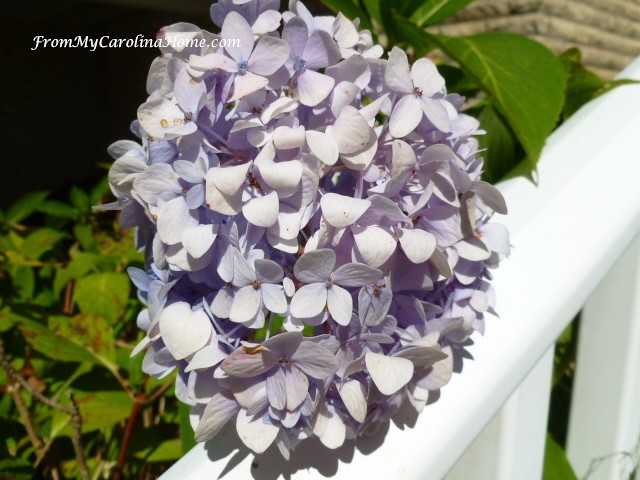 The African violets got huge over the summer, and I brought them inside for the winter. 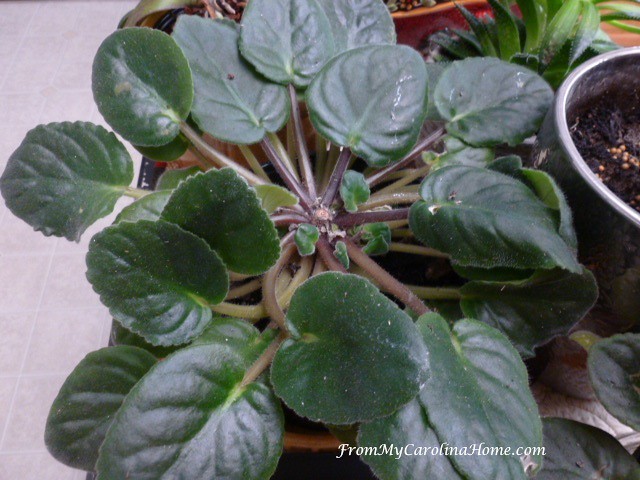 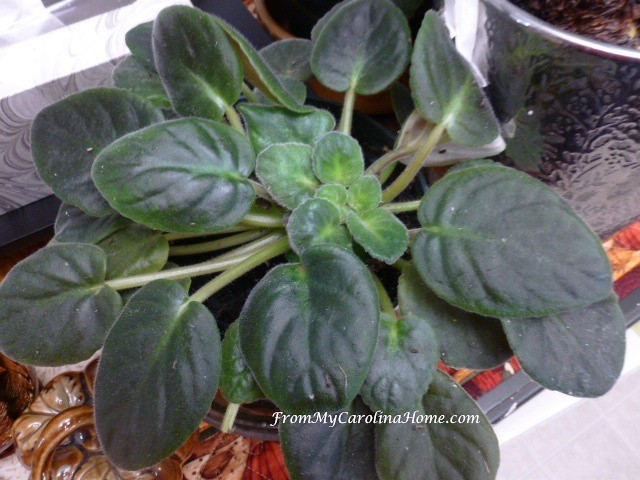 I brought in the red amaryllis too. A few days later, the leaf fronds started to turn yellow, so I cut them off and put the bulb’s vase in a cool spot in the Carolina room and covered it up so it could rest. It needs about six weeks of dry dormancy. I’ll bring it out the first of December to start watering it in the hope that I’ll get earlier flowers next year. If it blooms again, it will be the fifth year that it has bloomed.  Amazing to me, as I have thrown these away in the past after the first year! 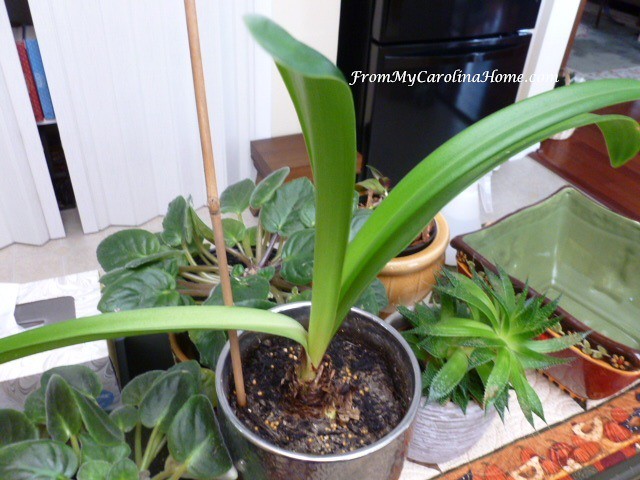 Putting the orchid outside in the summer heat was good for it, but it still doesn’t look like it is going to flower.  I was happy to see some new leaves, though, so there is hope. 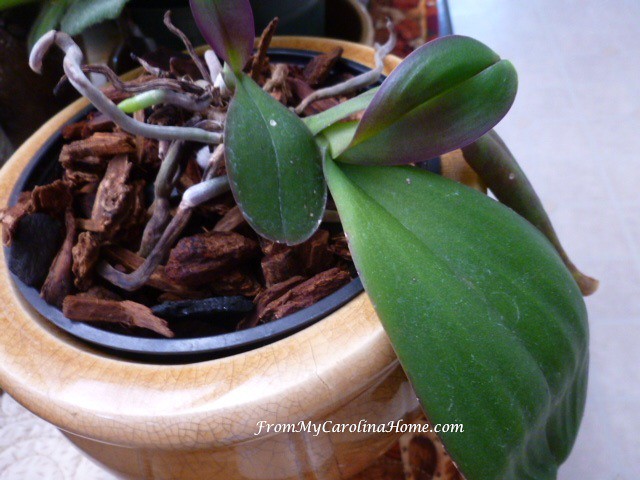 Back outside, there are two daisies that decided to bloom once more before winter. 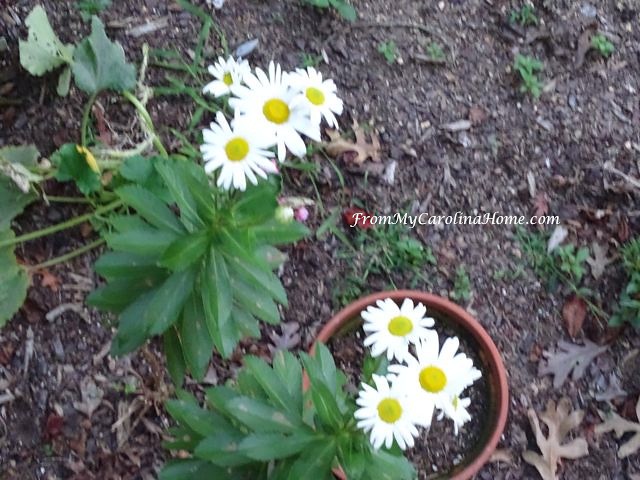 Wildlife is visiting our mountain home regularly as well. Just past the hosta seed pods, there are four deer in this photo. A small family unit with one male, a female and two juveniles.  Look carefully and you can see their tails on the right. 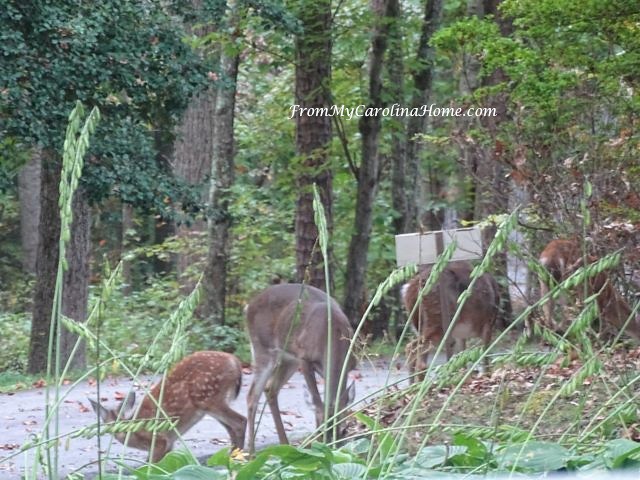 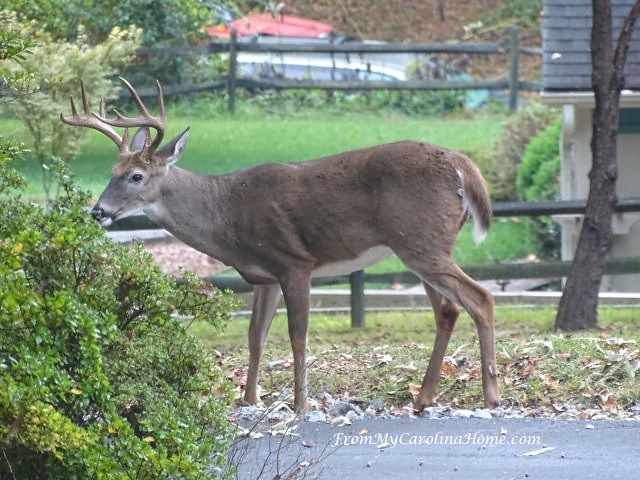 Both of the little ones still have their fawn coloring with spots. 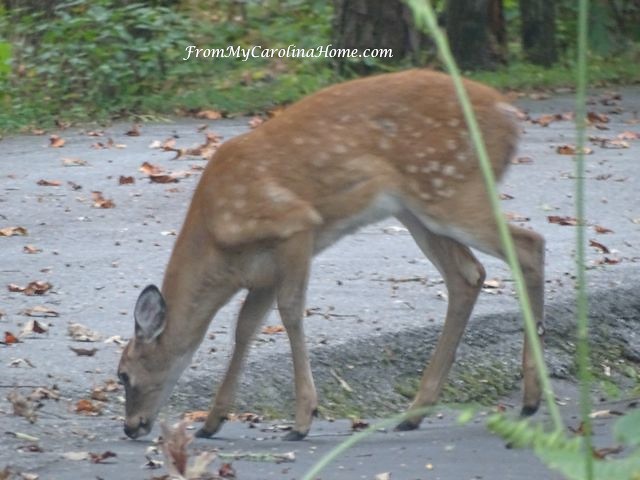 On another day, a second small herd with two females and two young ones stopped by for some acorns. 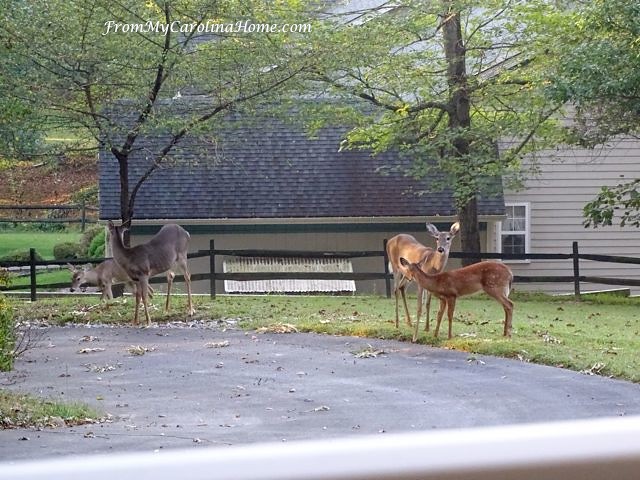 These deer were much more skittish, and took off for the woods fairly quickly, so getting their picture was a challenge. 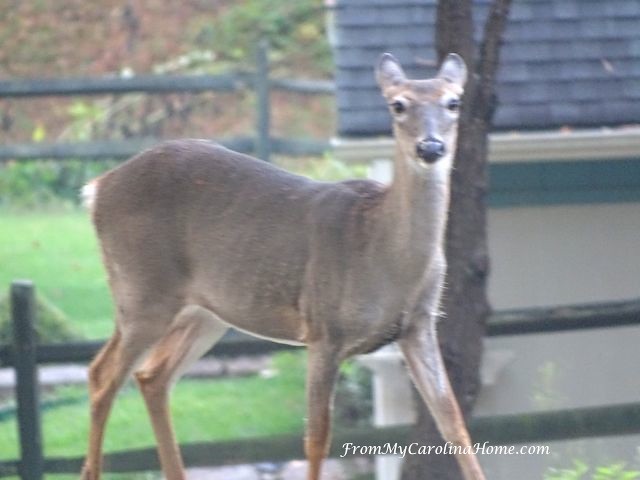 On the feeder, the purple finch is stopping by more often. He discovered the lower feeder that DH put up. 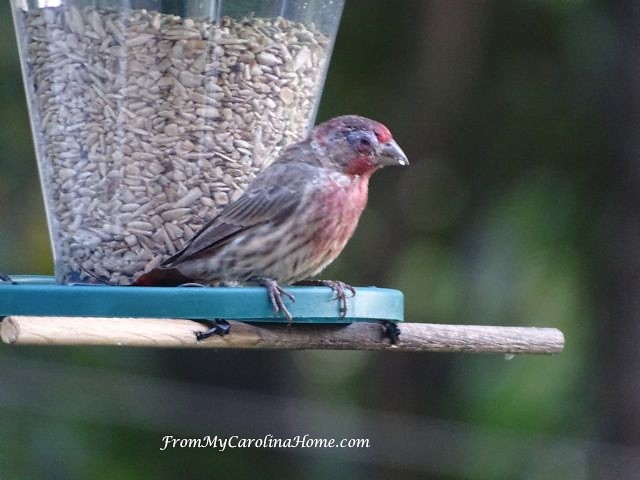 The goldfinches live here year round, and are in the process of losing their bright color for winter. 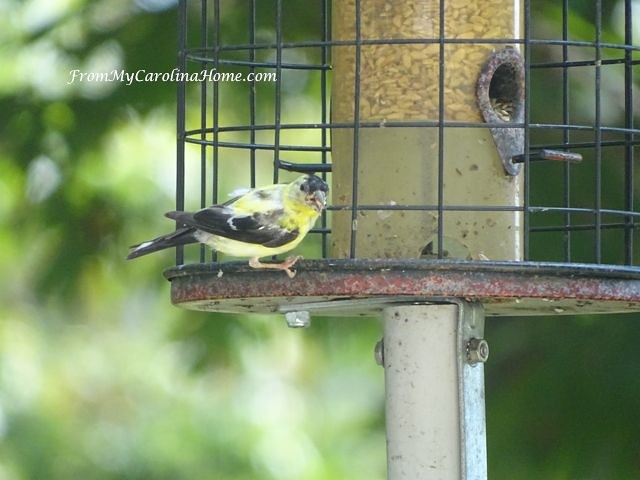 This little guy, a young woodchuck (or ground hog if you prefer), has been seen several times. He loves the acorns like the other visitors do. 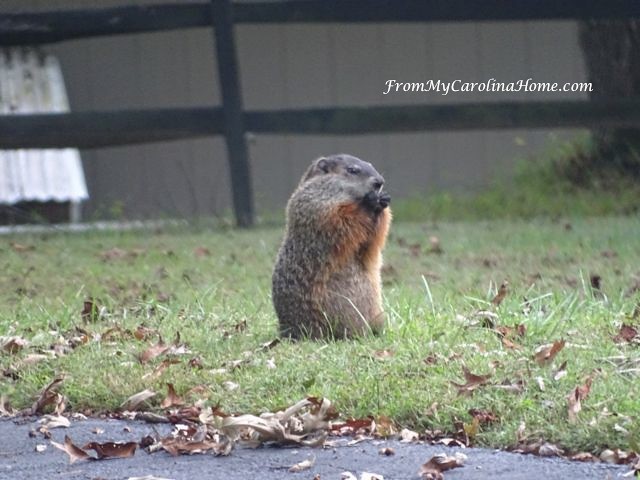 A large flock of female turkeys are stopping by on almost a daily schedule. There are 12 or 13 of them, and they have decided that they like the bread I give them. It is funny to go out on the veranda and call out “hi, girls!” and then watch them run up the hill from the meadow or the driveway toward me to get a bite. 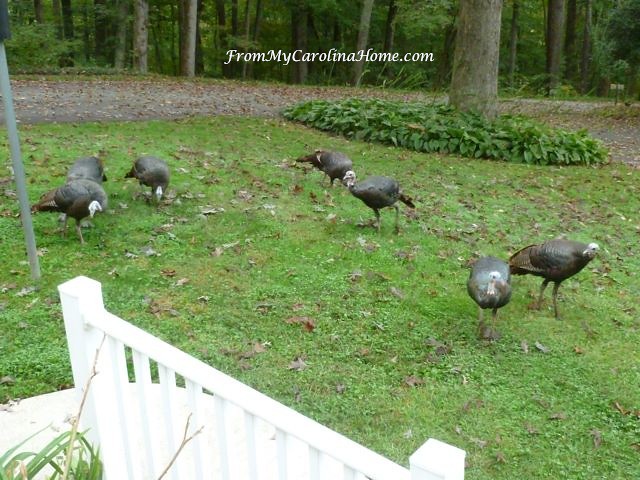 They don’t get a lot, and I try to throw the bites so everyone gets one. When I am out of bread, I go back inside, and they dine on acorns for a bit. Then they move on.  I have seen a male only once, and that was down the hill.  I’d love to see Bert and Ernie again. 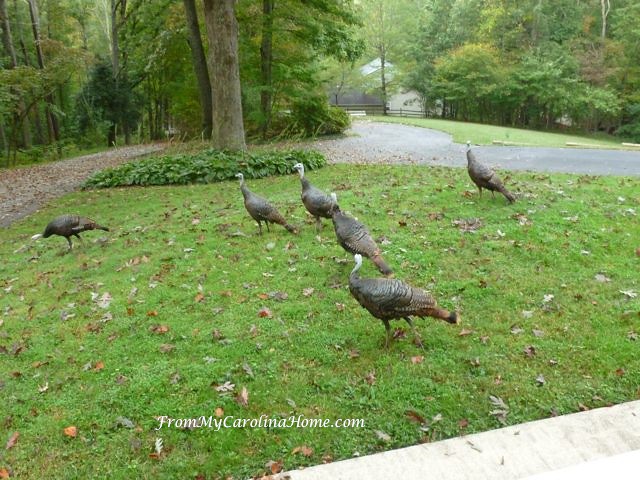 I am still harvesting parsley and I plan to just leave this for as long as it wants to continue.  The yellow calibrachoa are still blooming their heads off. 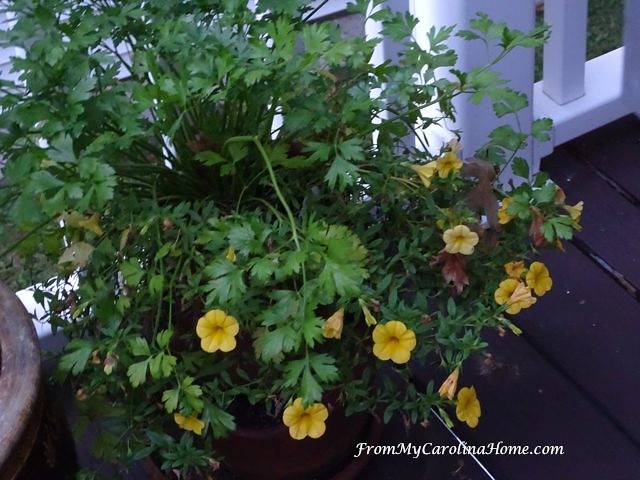 The torenias continue to bloom a little, mostly on new growth at the top, but the trailing parts are looking a bit ragged. A Carolina Wren has taken to sleeping in this pot, buried in the foliage, and I scare him sometimes when I go out at dusk. He startles me as well when he flies out unexpectedly. 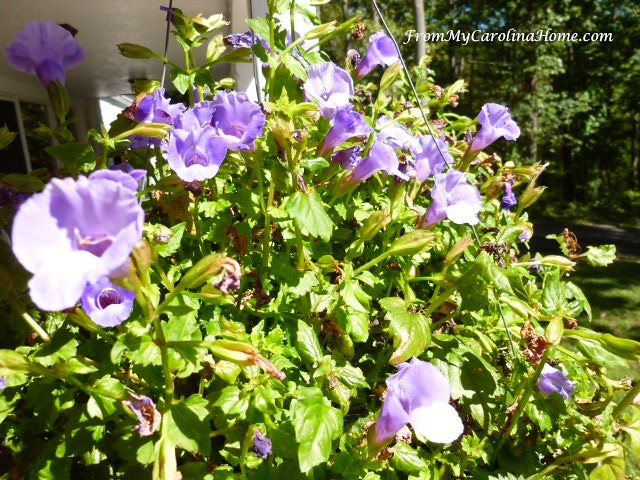 Today’s giveaway is from my collection of Gooseberry Patch books. This one is out of print, and was published in 1997. It is charming book, wonderful for cold winter days to read about gardening and planning, recipes for garden veggies, herbal treats and more. It has some fun projects to do with things grown in the garden, and to do for the garden. Charming and fun in traditional Gooseberry Patch style. I have two copies, so one can be yours! 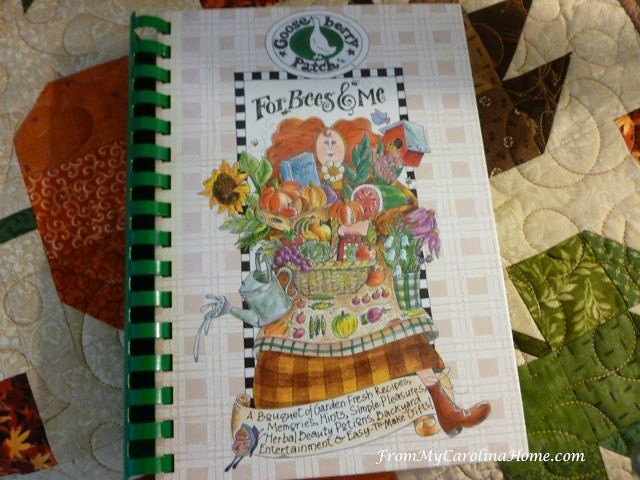 Entering today is easy, just leave a comment on this post about your garden, what you are doing now or your plans, anything to do with your garden.  Yes, international entries welcome, I can send anywhere.  Good luck!

69 thoughts on “October in the Garden and a Giveaway”