The late spring weather has been mild, with cool mornings and evenings. Abundant rain this spring has pulled us out of drought, and brought the level up in the French Broad River. DH had a day off during the week, so we decided to finally take the canoe trip we’ve planned to do for years. It is only a half day of total time, including the drive time up to the facility in Asheville. So, we got tickets online, and made reservations for an early start. Arriving at the waterside, we were given a short instruction on the river hazards, what to avoid, how to go under the three bridges, and interesting things to look for on the way. 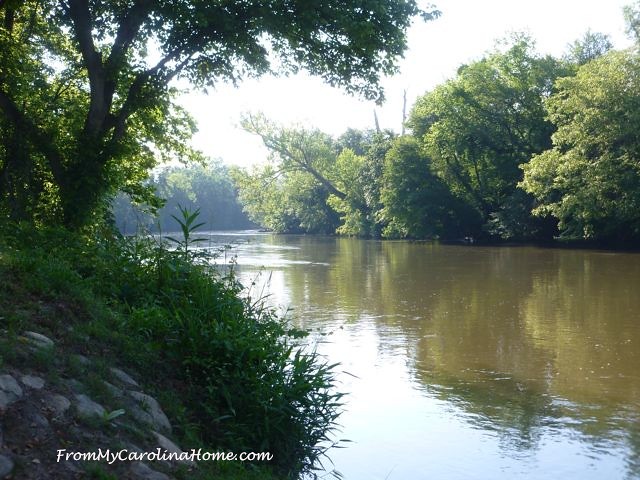 Slathering on sunscreen and spritzing a bit of bug spray, we donned our life jackets and boarded the van towing the canoes for the ride out to the launch point. It only took twenty minutes to get there, but would take two and a half hours to come back on the river. We were the only canoe renters that morning, but three other folks went along with their own kayaks. Several canoes were removed from the trailer to make room for their kayaks. They were here on vacation, and we had a nice chat about local restaurants on the way. 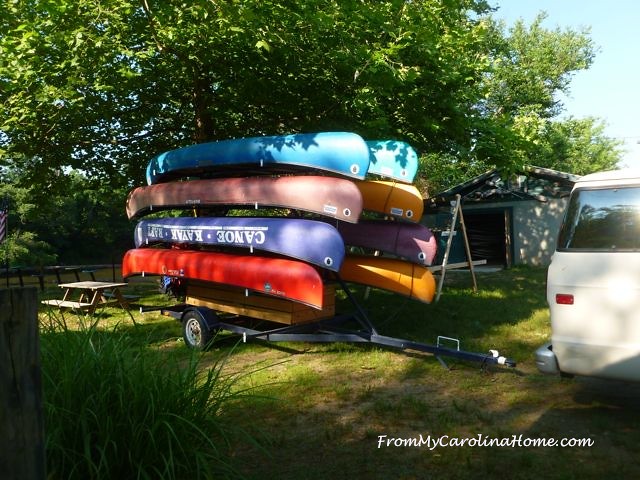 Our canoe was unloaded first, and we climbed in and sat down with our paddles at the ready.  A push off by our guide, and we set out on the river. 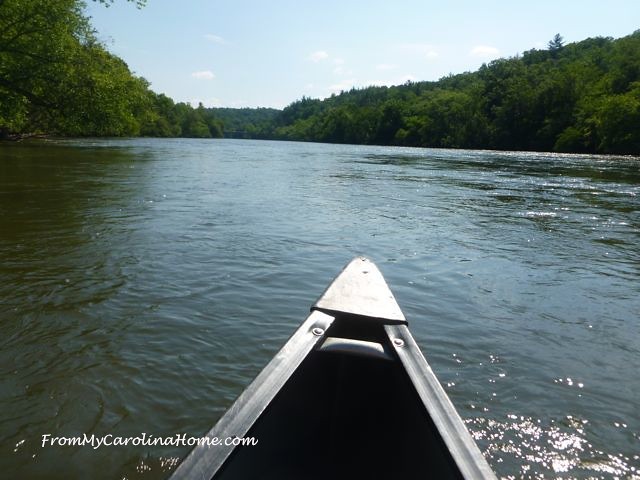 About 20 minutes later, we got to the first bridge. Going ‘left of the blue dot’ we easily floated through the archway.  Those little churning areas were no problem, and actually quite pretty in the sun. 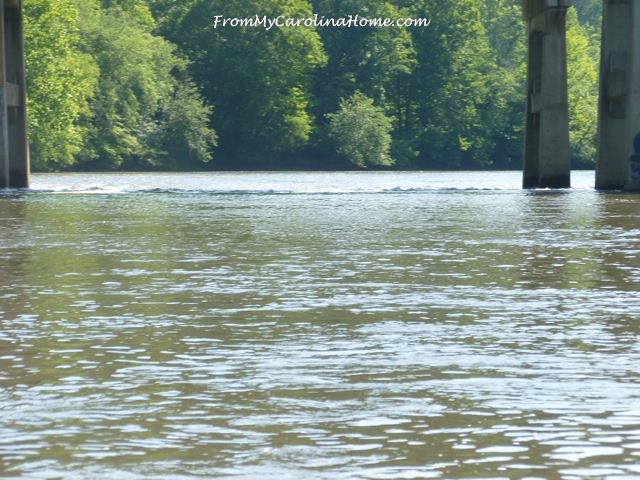 Verdant green trees lined the river on both sides as it wound lazily around the countryside. It was so quiet too, just the gentle sound of the water as it flowed, sometimes babbling as it went around boulders or bridges, or trees sticking up on the edge of the shore. 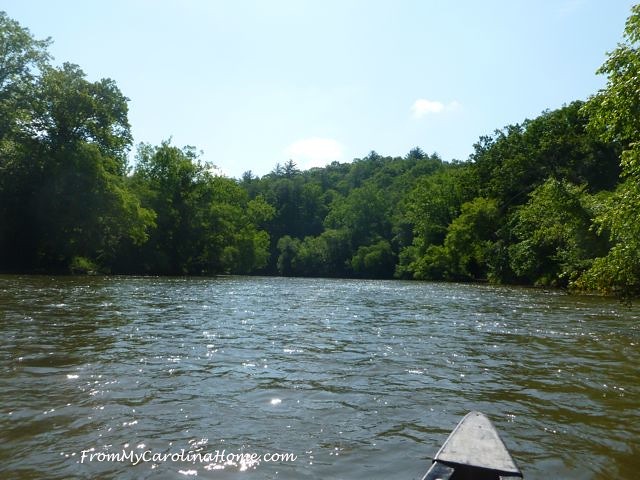 Off the main river, in a side inlet, we found the arched stone bridge. 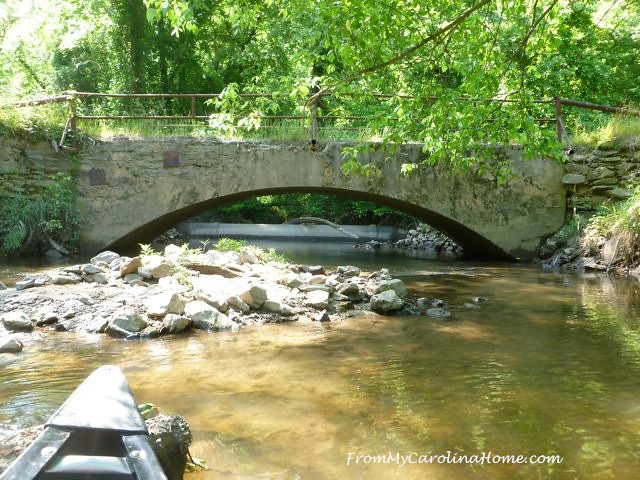 In places, the trees overhung the water, so you could stay in the shade a bit.  We came to appreciate these areas as the sun climbed higher in the sky, and the temperature rose with it.  Although it was about 68º F when we started (19º Celsius), it was about 86ºF at the end (30º Celsius). 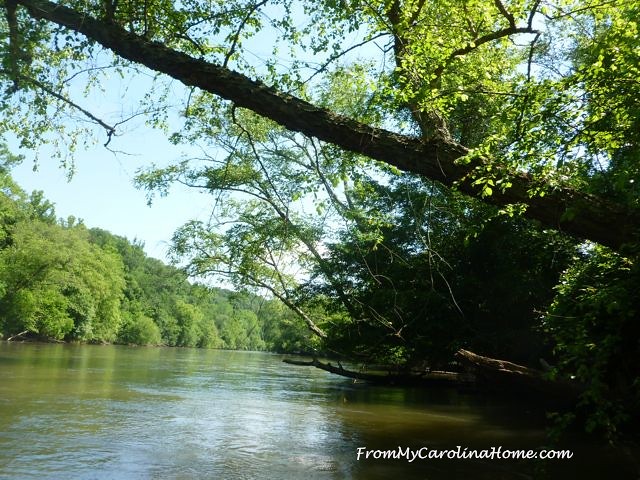 Wildlife was abundant in the morning hours. We came around a bend and almost missed this giant turtle sunning himself as he blended with his surroundings quite well. I wasn’t sure the picture was going to be clear, so we turned the canoe around and paddled back to see him again. But when we made the turn, he was gone.  DH was amazed at the length of his tail!  He was huge. 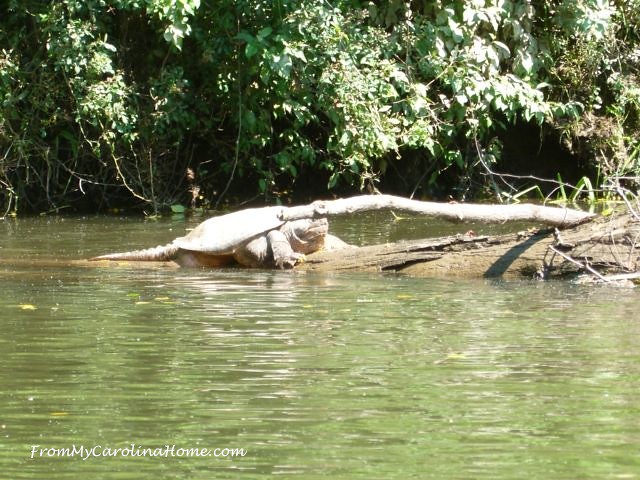 Looking up the hill on the side of the river, a horse pasture with an old barn came into view. We could hear the horses neighing to one another long before we were able to see them. Can you see them? There are at least four at the top of the hill. 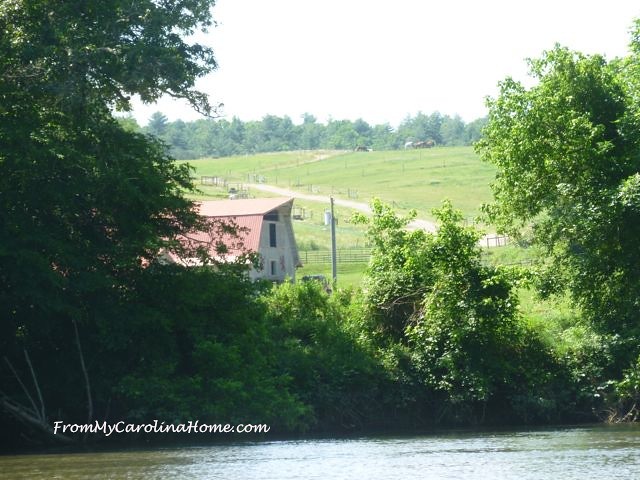 The river took us farther downstream, as we floated without paddling for a bit. Did you know that the French Broad River flows northward?  Originating near the town of Rosman which is near the southern border of North Carolina in Transylvania county, it flows northeast generally, winding around towards Asheville getting larger as it goes north, collecting in smaller rivers.  It flows north east then north west, ending in Tennessee near Knoxville where it joins the Holston River to form the Tennessee River. 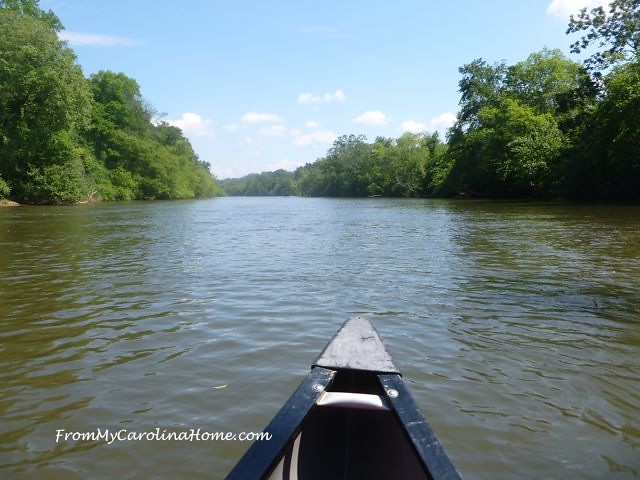 Looking up on the right, we could see the corner of the Biltmore House coming into view. We had been told that it would be visible from the river, and thought this would be it. 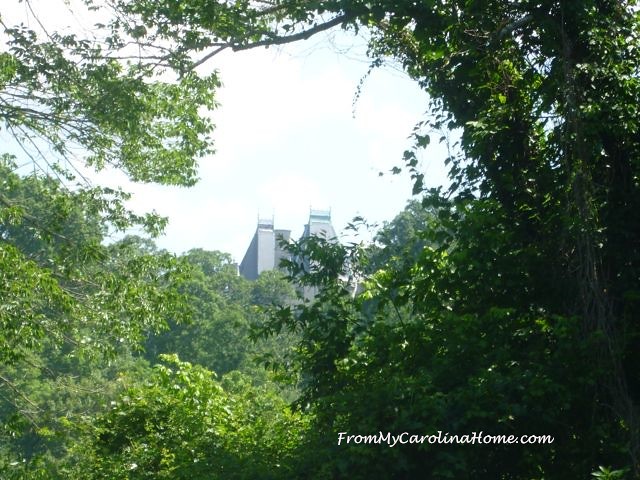 But a little farther on the river, a better view presented itself. 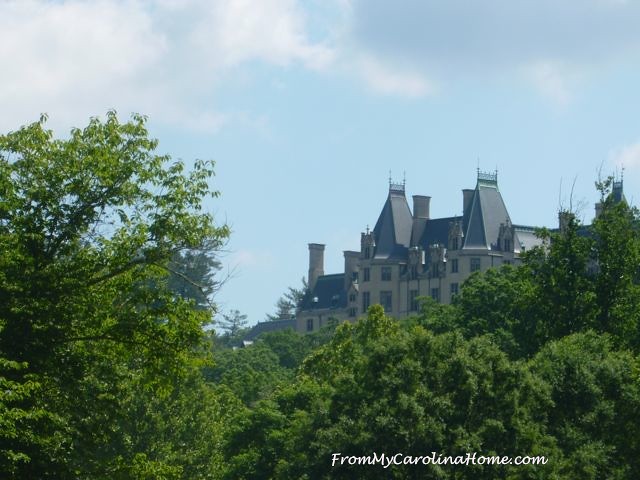 A couple of families of Canadian Geese were tending to their little ones. So cute, the little golden fluffballs swimming next to the parents on the right couldn’t be more than a couple of weeks old. 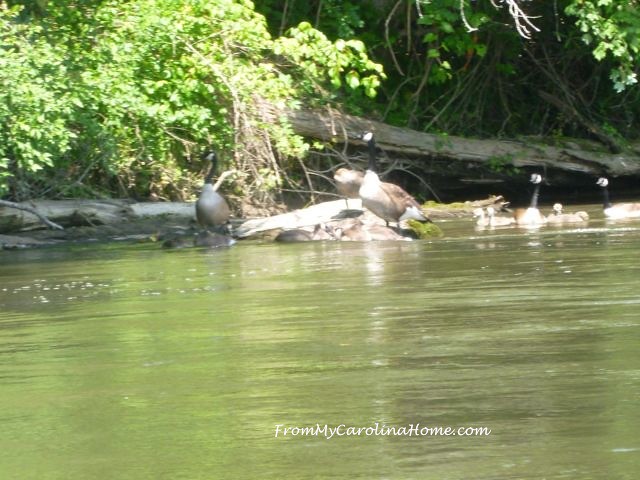 A little farther along, pretty dark birds with a flash of blue were flying low over the water. We think they were after the mayflies and similar insects floating on the surface of the water.  The river stayed about the same width the entire length of our trip, but it gets much bigger after gathering in the Swannanoa River north of where we would end our trip.  The river is 218 miles long, and we only saw a tiny fraction. 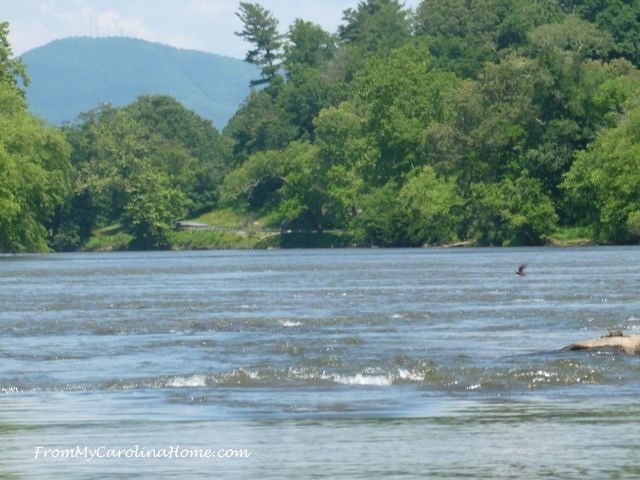 These geese were loudly complaining about the intrusion on their waterway. 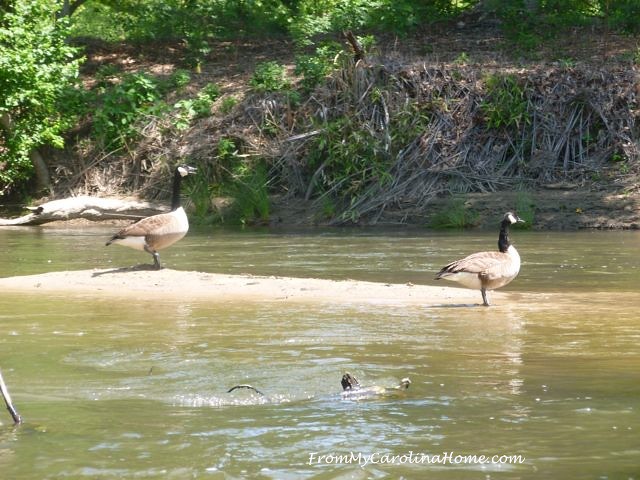 More green on the water, so peaceful and quiet. We didn’t see the kayakers until the end of our journey when they finally caught up to us. We decided to let them go by, and took a bit of a break in the shade. 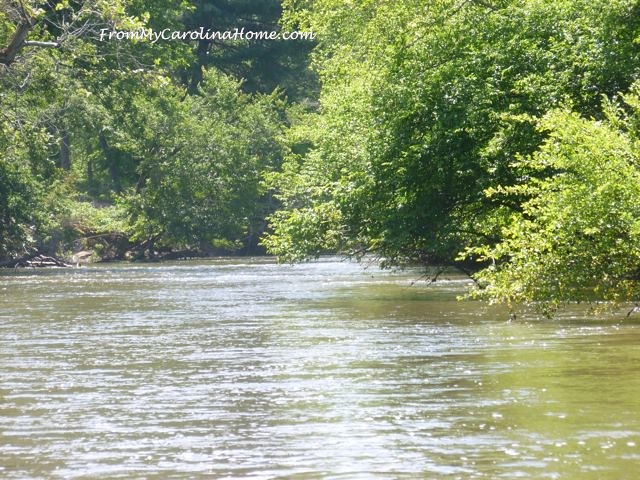 One more picture, the river with more mountains in the distance. Such clear colors are seen on this morning, but by now it was after noon and getting a bit hot in the sun in spite of the puffy clouds.  By the way, do you know why it is called the French Broad River?  I had to look it up because I was curious.  There are actually two rivers in North Carolina which were called Broad Rivers, and at the time they were named, this area was held by the French.  So this one became the French Broad River and the other was referred to as the English Broad River. 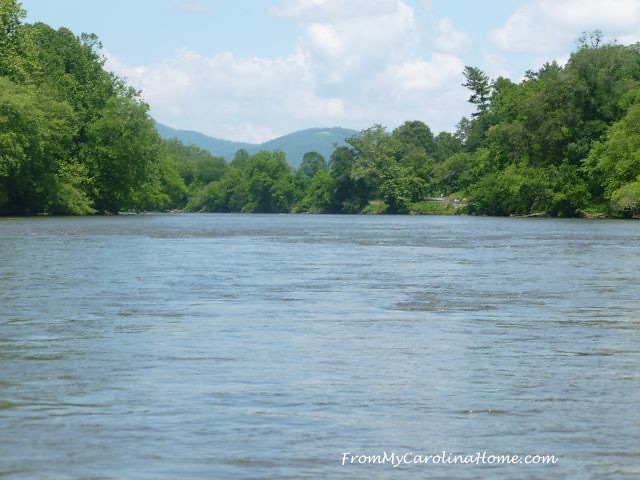 At this point, we still had about half an hour to go before getting to the end point where the car was parked. There was one more beautiful bridge with some lovely architectural details, but the camera battery died before I could get it. I guess that means we have to go again. I think this would be stunning in the autumn, but I am also sure that the river is likely pretty crowded then.  Still, if we go at the right time, it could be wonderful.

Have you ever done a canoe trip, or something like it?