This week I went with friends to the Biltmore House for their Designed for Drama Event, a collection of costumes worn in movies based on George Vanderbilt’s favorite books.  This is the third time the Biltmore House has done a costume exhibit.  The first one, Dressing Downton Abby was spectacular!  This exhibit is a collection of more than 40 outstanding costumes from 14 recent movies based on books that were George Vanderbilt’s favorite reads.  The amount of handwork and details on the gowns are just amazing.  I took over 200 pictures, making up for lost time as up to now pictures were not allowed at Biltmore House.  They now allow non-flash photography, so I had a field day, and was very happy I took an extra battery for the camera! There is no way I can show you all the wonderful costumes, I just chose a few to highlight. First, this one is a gorgeous gold gown with period correct black sequins. It was worn by Nicole Kidman in “Portrait of a Lady”.  Note the detailed lace at the hem. 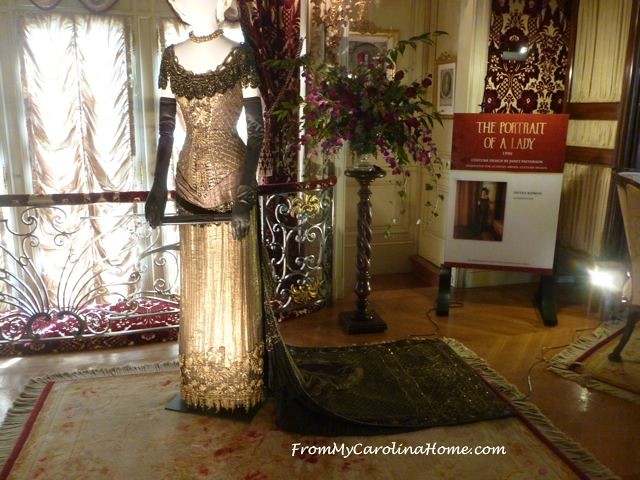 Just look at the handwork and decorative stitching on the bodice, and the matching gloves. 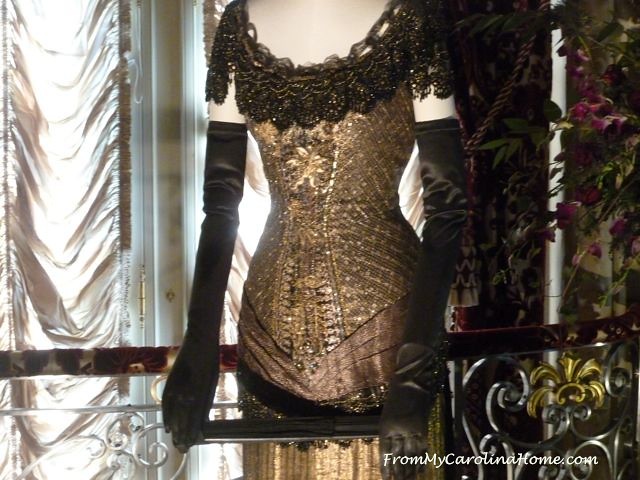 The library is my favorite room at the Biltmore House, and it is spectacular. Bookshelves line the room on all four sides, with a secret passage behind the upper level chimney behind the fireplace.  The ceiling is ornately painted, and the woodwork is awe inspiring.  This room held the simple costumes from “Pride and Prejudice”. 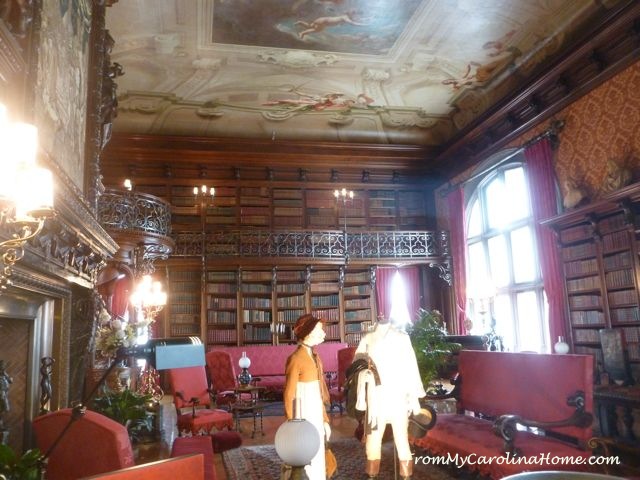 In all the exhibits, the actual volumes from the Vanderbilt library accompanies the exhibit, displayed in clear cases. 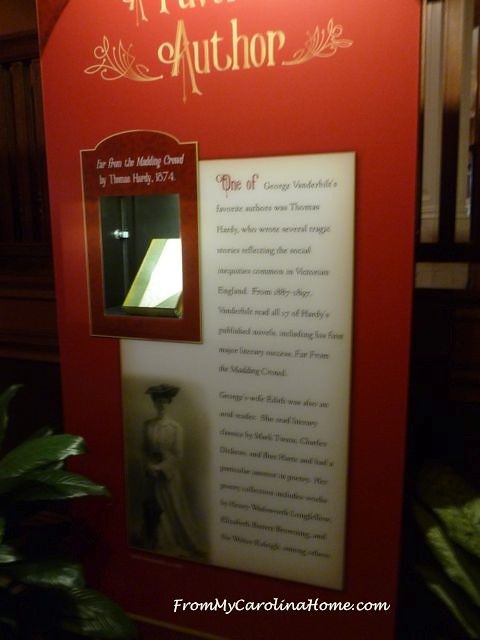 Additional posters detail the costume’s origin, designer and who wore it. The “Golden Bowl” dress was one of the most spectacular, worn by Uma Thurman. 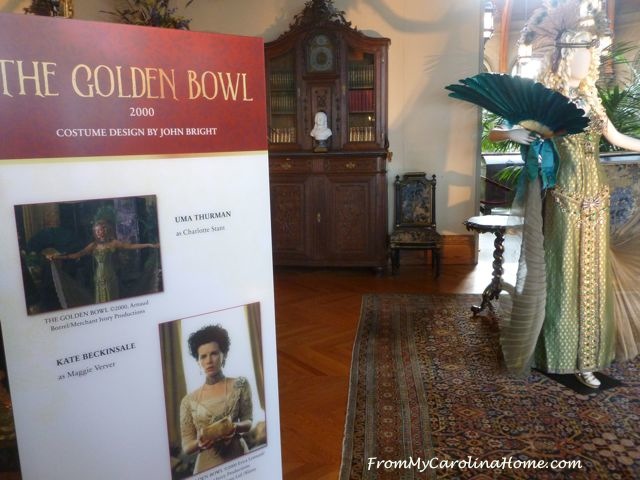 Look at the peacock headdress, the jeweled bodice and jeweled girdle around the hips. 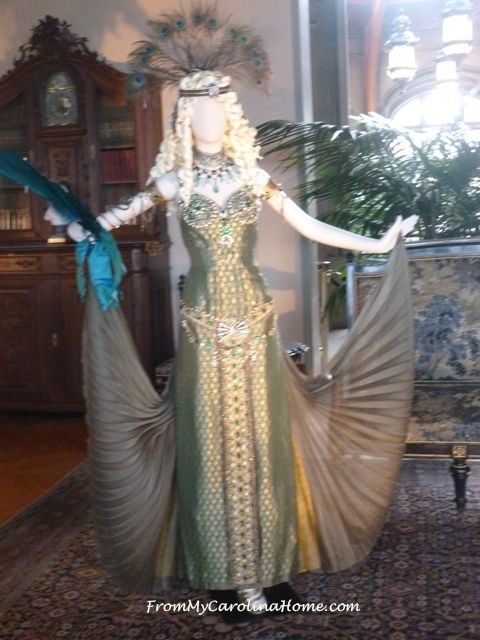 The necklace was a golden collar with large emerald color stones. 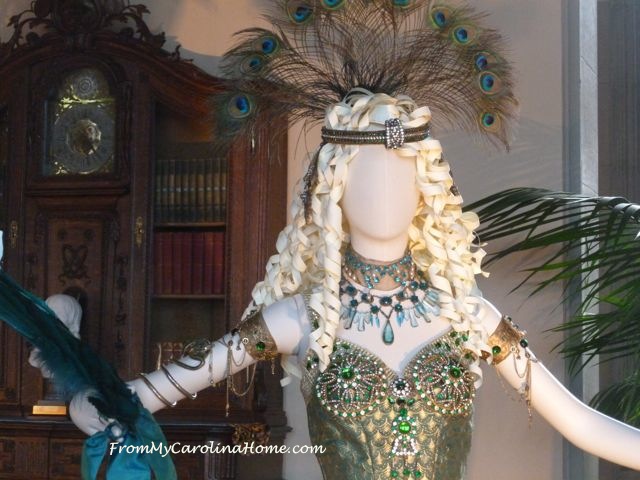 This is the dress worn by Kate Beckinsale in the same movie. Lovely lacework on this gown! 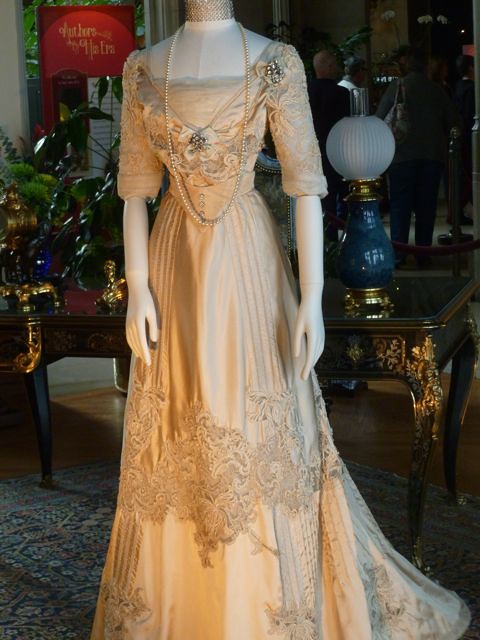 This dress was a bit simpler, a day dress, but what a hat! 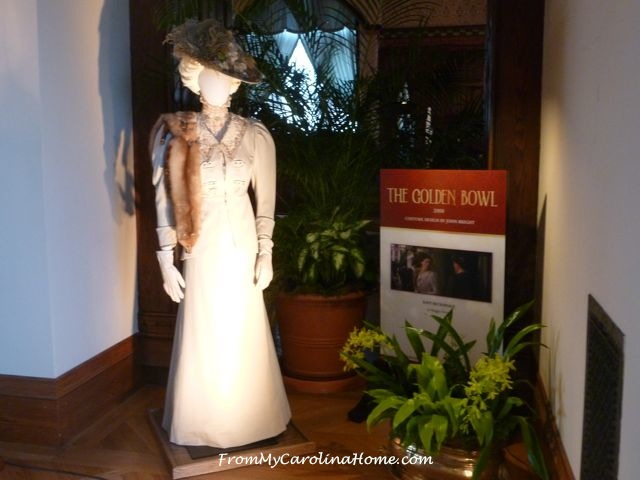 I’d wear this hat today, I love to wear hats! Of course, it would likely need to be the Kentucky derby to get away with it, LOL! 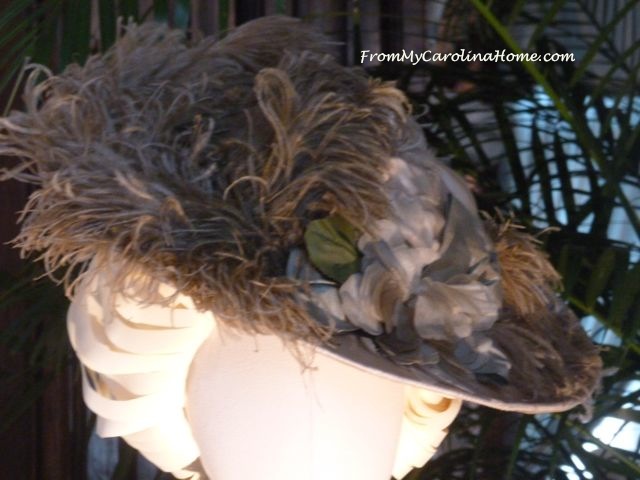 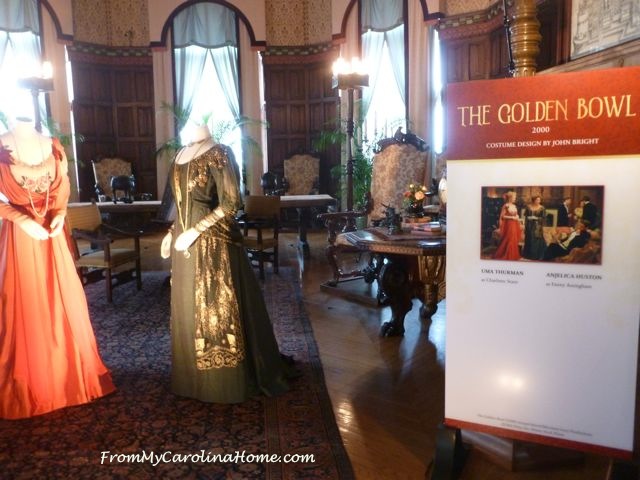 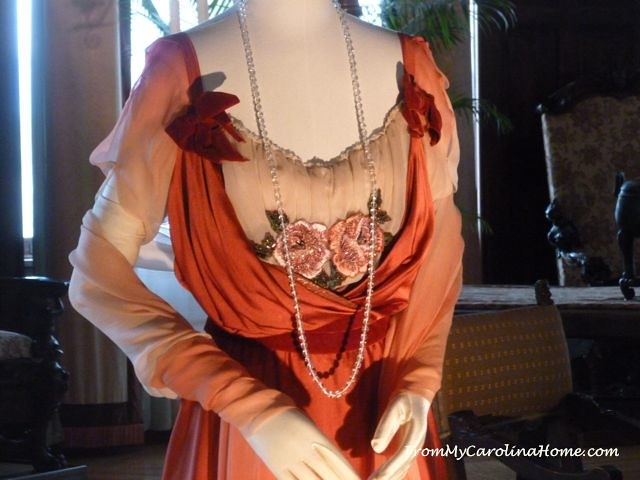 The shawl on this dress was made of gossamer fabric with exquisite embroidery in gold. 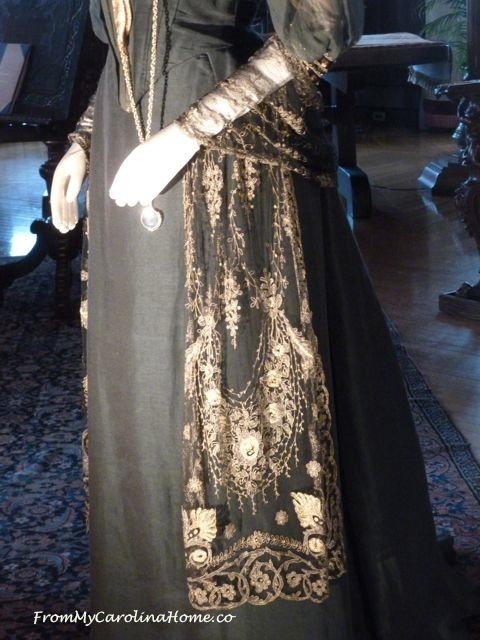 While we were enjoying the costumes, the pipe organ was being played, with ragtime songs from the 1920s. The music could be heard over a large portion of the tour. 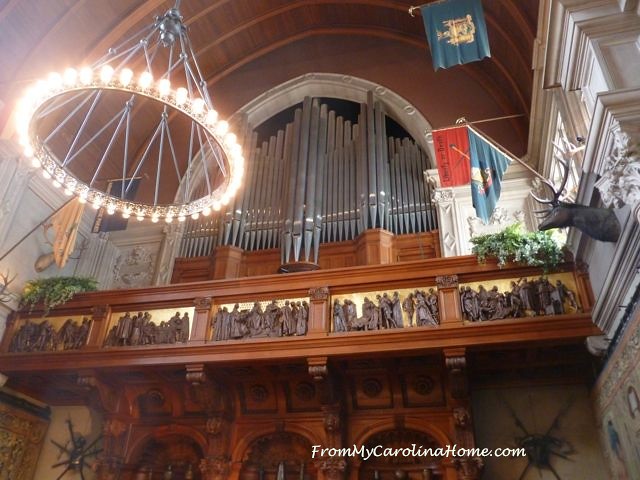 These costumes from “House of Mirth” were arranged with mirrors so you could see the backs of both.  The room here is Mrs Vanderbilt’s bedroom, with gilded portrait frames and mirrors. 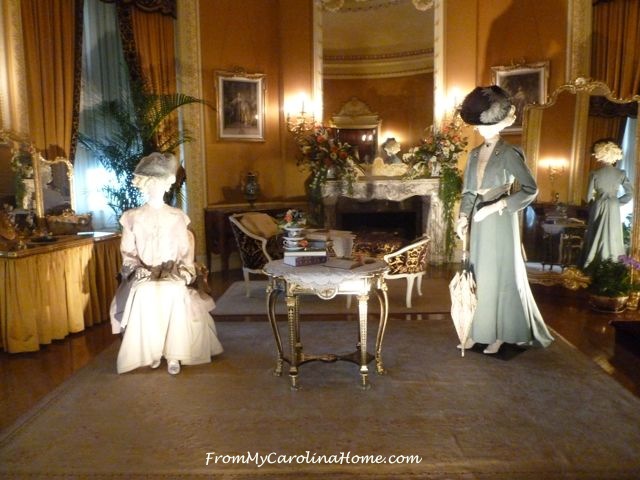 The next room showcased the simpler style of “Jane Eyre”, still beautifully sewn. 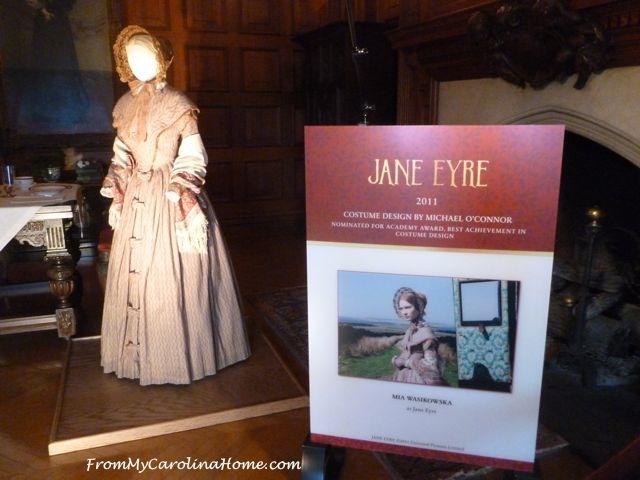 This rich red gown from “Portrait of a Lady” is right at home with the burgundy papered walls of the bedroom.  Every room at Biltmore House is furnished beautifully, and appointed with sumptuous draperies and beautiful rugs. 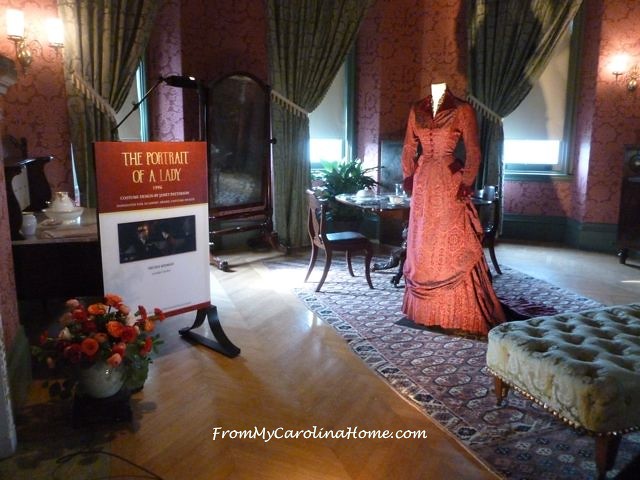 This lovely gown and dashing tuxedo are from “Sherlock Holmes”, set in the billards room in the Bachelor’s wing. 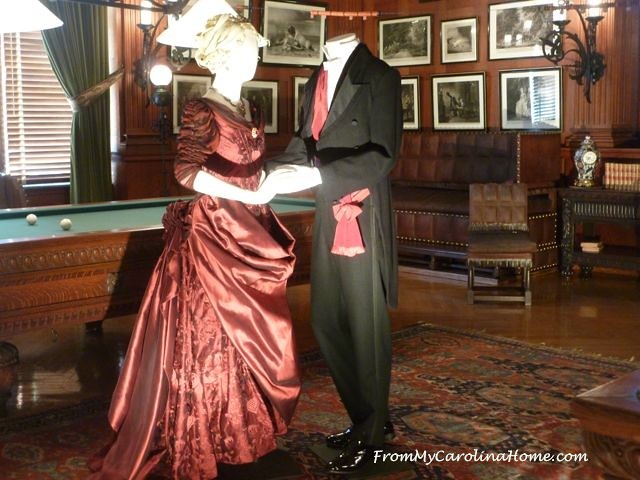 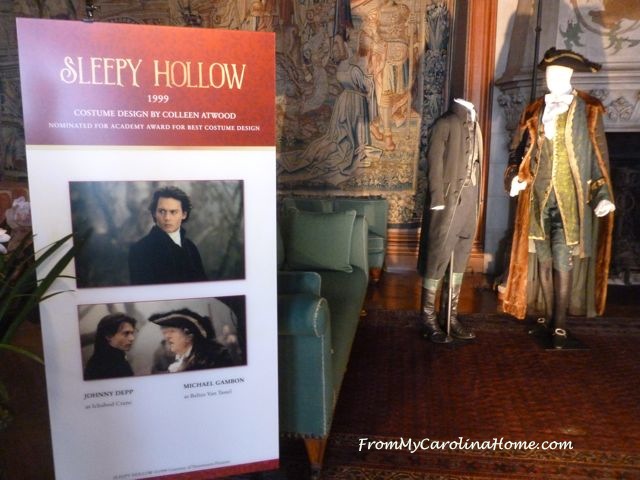 Even the gowns worn by the extras in the film “Sleepy Hollow” had attention to detail. 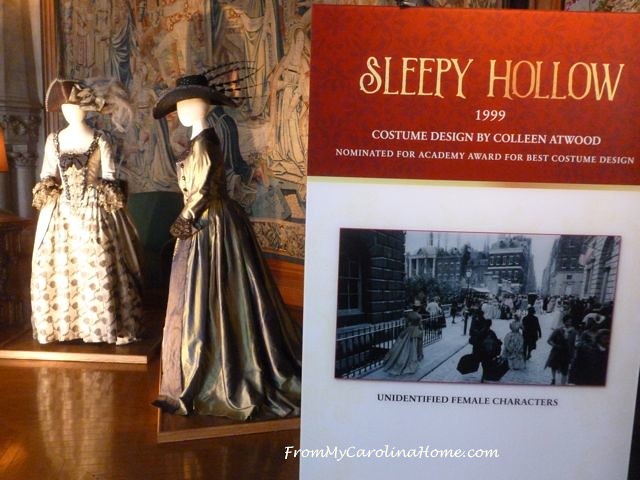 Just look at the lace on the bodice, and this was worn by someone in the film’s background. 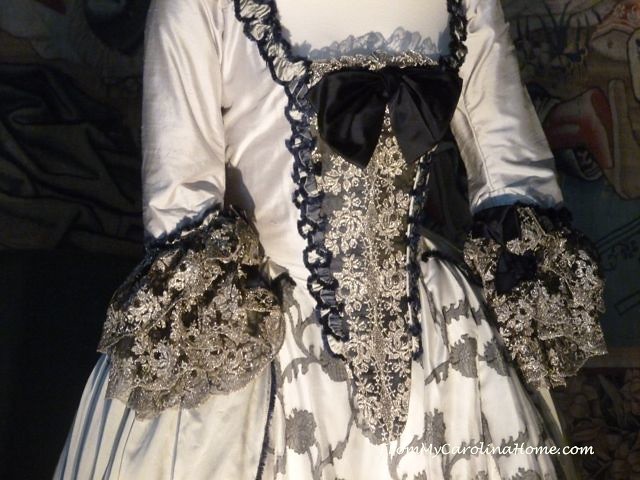 Lastly, these two lovely gowns are from “Twelfth Night”. 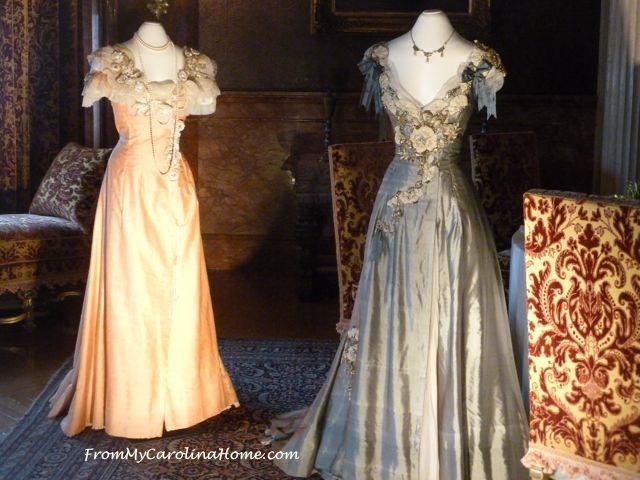 There was a lot more to see, including gowns from “Anna Karenina” and fanciful costumes from “Finding Neverland” and more.

From the Biltmore House website – “Once recognized as ‘one of the best read men in the country’ by New York media, [George] Vanderbilt amassed a library of more than 22,000 volumes at his North Carolina home. A reader from an early age, he began at the age of 12 keeping a record of the books he had read, including the title and author of each work. By his death in 1914, Vanderbilt had logged 3,159 books. He also counted leading authors of the era as personal friends, including Henry James, Paul Leicester Ford, and Edith Wharton—all of whom stayed at Biltmore House as guests of George and Edith Vanderbilt.”

You can read more about the creation of this exhibit in their Designed for Drama Press Release.  More pictures are on the Biltmore House website Photo Gallery.  If you are local, make plans to see this wonderful exhibit.  If you haven’t made your vacation plans for this year, come to Asheville/Hendersonville!  The event runs through July 4, 2017.

Did you enjoy the pictures?  Have you read these classics?

Take Me Away Travel Link Party

22 thoughts on “Designed for Drama – A Biltmore House Event”