I really enjoy the genre of cozy mysteries, nice easy to read stories without gore, overt violence, sex or foul language. Even the obligatory murder for a murder mystery happens “off camera”, and only the body is found. Arlene Sachitano writes such a series with a quilting theme called the Loose Threads Mysteries. The books are written in an easy to read style, with lots of quilting thrown in. There are some tips here and there too. One tip I found particularly appropriate was that quilters usually do not have enough lights in their stash, so every time you buy fabric you should throw in a yard of a light to round out your stash. Good advice! 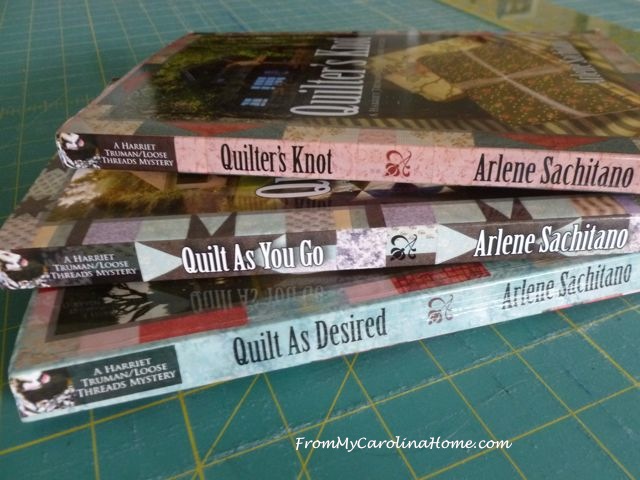 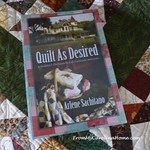 The first book, Quilt As Desired, starts out with the main character, Harriet Truman, coming back to Foggy Point so she can keep a business running while her Aunt Beth is on a cruise. Instead, she finds out after her aunt leaves that she has in fact retired and left Harriet the business and her house. When Aunt Beth’s best friend, Avanell, is murdered, and her own studio trashed, Harriet must figure out what is going on before the killer strikes again. Harriet is thrown into the investigation with Avanell’s son, Aiden, and he quickly becomes smitten with her. However, Harriet is having none of it. She is still reeling from being suddenly widowed five years earlier by a husband who didn’t tell her about his fatal illness. But the Loose Threads quilting group welcomes her and helps her to begin to heal that wound.

In the second book, Quilter’s Knot, Harriet and the Loose Threads go to a retreat. One of the members, Lauren, is attending a longer program in original design to stop the rumors of her copying other quilter’s work. However, Aunt Beth thinks she saw an identical quilt to Lauren’s work while she was in Europe. Lauren believes the school owner has in fact copied Lauren, and wants Harriet to prove it. But when the owner is killed, it is up to Harriet to prove Lauren is innocent, and she doesn’t even like Lauren.

The third installment, Quilt As You Go, has Harriet and the Loose Threads making quilts in Civil War reproductions to sell at the local reenactment and street fair. When one of the ‘soldiers’ doesn’t get up after the ‘battle’, Harriet is dismayed to find he is dead. Not only that, but he was married to one of the Loose Threads and was thought to have died 20 years ago. Of course there is a quilt involved, that appears without warning in Mavis’ house, a quilt she made for that husband years earlier and hadn’t seen since before he ‘died’. There is a lot to sort out here, including finding out about a stranger that appears to be interested in Carla, another Loose Threads member. The romance between Harriet and Aiden heats up a little too. The books are quick reads, and are printed in trade paperback size with print you can actually see. There are three more in the series, and I look forward to reading them as well. 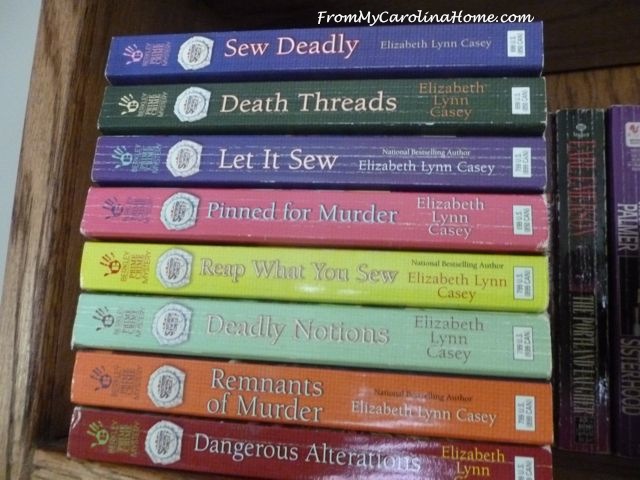 Elizabeth Lynn Casey’s series Southern Sewing Circle begins with Sew Deadly.  New to town, librarian Tori Sinclair becomes embroiled in a mystery, and she is a suspect.  She has the added problem of being a Yankee in South Carolina.  Joining a sewing circle to make friends, she has another problem as the former librarian is a member.  I found this book very engaging, with a wonderful easy style.  I’ve only read the first one in the series, and will get to the rest soon. 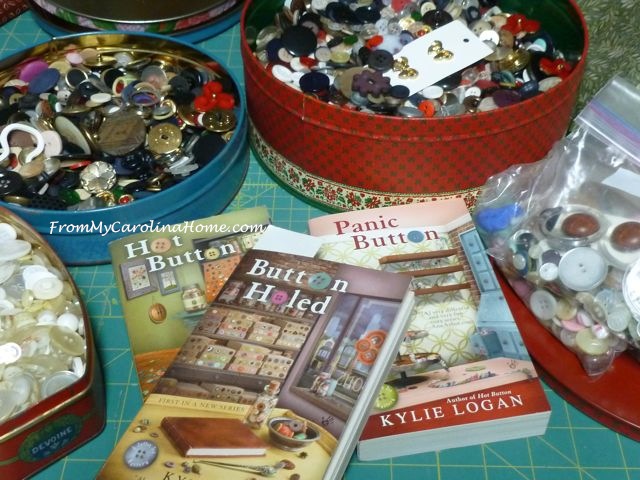 Kylie Logan (one of several pen names for Constance Laux) writes a cozy series set in a button shop.   I really wanted to like this series, but the more I think about it, it just didn’t hit the bar of other cozy authors.  Josie Giancola is surprised to find burglars in her shop ransacking the place, right before she is to show a super star some button choices for the star’s wedding gown.   When the super star is later found dead in her shop, Josie has to do some digging concerning a strange button found with the body.  Josie is still attracted to her ex-husband, who is always in trouble with money and gambling, but his character gets a bit annoying.  I truly get aggravated by characters that cannot take a stand and stick with it, and Josie eventually gives in to his constant requests for money with unbelievable stories.  She calls it a payment for services, but we all know better.  She gets manipulated by a TV show host, Estelle, who wants her to be the Button Babe, a demeaning role that she eventually agrees to do.  I was also disappointed that there wasn’t more button lore in the book, there is only a website mention in the back.   I’ll read the next one just because I already have it, but if the characters don’t grow, I’ll likely not go any further.

Another cozy mystery series by Earlene Fowler called Benni Harper mysteries involves a widow who moves to a small town in California to be the new director of the Folk Art museum.  Her first exhibit is an antique quilt show.  Of course, the murder occurs there, and the police chief would rather she go back to quilting and stay out of his way.  Over the course of the first two novels, they end up together.  The fun thing is all these novels are named for quilt blocks, starting with Fool’s Puzzle, and continuing with Irish Chain and Kansas Troubles.  There are now eleven novels in the series.  I got bored with this series after book 3, and I have to say this was some time ago.  I haven’t read most of the series. 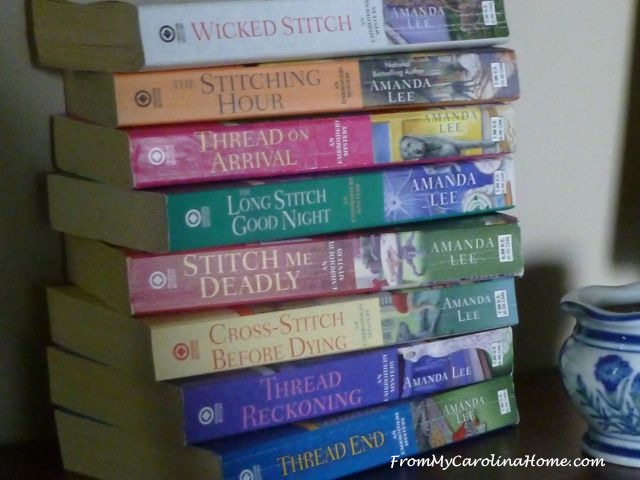 Amanda Lee (pen name of Gail Trent) writes the Embroidery Mysteries series dealing with cross stitching.  Beginning with The Quick and the Thread, new shop owner Marcy finds the previous tenant dead in the store.  It is part of the formula, I think, that the first murder has the protagonist as a suspect, generally with the victim found in the new business, or in connection with it.  But, such are cozy mysteries!  Still, I enjoy reading them.  Next, in Stitch Me Deadly, and antique piece of needlework become the catalyst to solve the death of an older woman who collapses in the store.  I have several more to get to in this series as well. 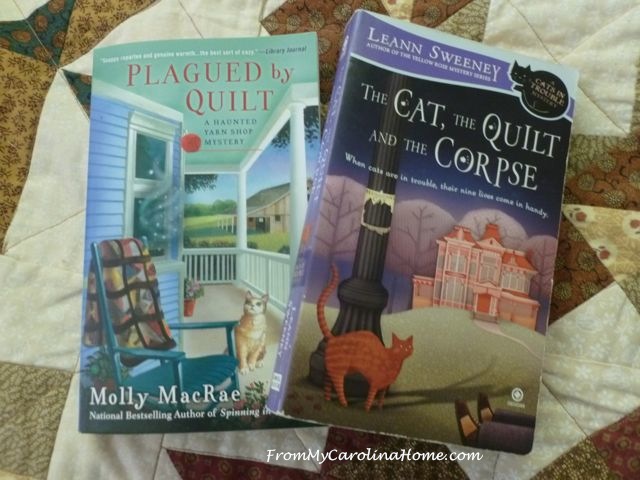 I have two more cozys on the To Be Read shelves, (pictured above) The Cat The Quilt and The Corpse by Leann Sweeney, and Plagued by Quilt by Molly MacRae.  I’ll get to these at some point.  Plus I just found another one at the library sale last weekend, a new series starting with Going Through the Notions by Cate Price.  Reader Barbara let me know of yet another cozy series that I haven’t seen yet – Mainely Needlepoint Series by Lea Wait.  The first book of that series is Twisted Threads, and looks really interesting as it ties the current day murder with the disappearance cold case of the protagonist’s own mother.

This is the third post in my series on sewing and quilting in fiction.  If you missed the first two, find them at Quilting Fiction and Celebrate National Sewing Month Fiction.  There will be two more posts with additional genres, and next time a giveaway!

Have you read any of today’s books?  Are you a cozy mystery fan?