There is still activity in the garden, even in the deep winter.  We don’t have the epic snowstorms like the northeast area of the country, but we do have our share of cold.  One of the joys of living in western North Carolina is the almost perfect four seasons, about three months of each.  Not too cold in winter, not too hot in summer, with long spring and fall color.  January has seen its share of cold days this year. Because of the cold, a varied and colorful bird population has been at the feeder daily.  This little purple finch visits regularly for a seed meal. 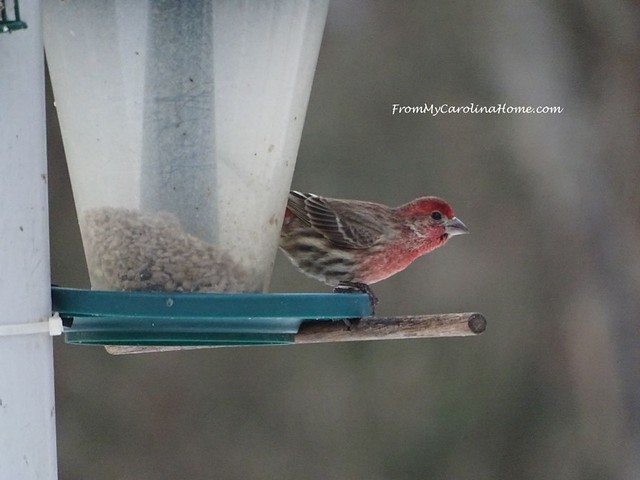 Rising early in the morning sometimes brings a beautiful view of sunrise over the mountains to the east of our property.  Gorgeous this day, the pink was so intense it was difficult to photograph. 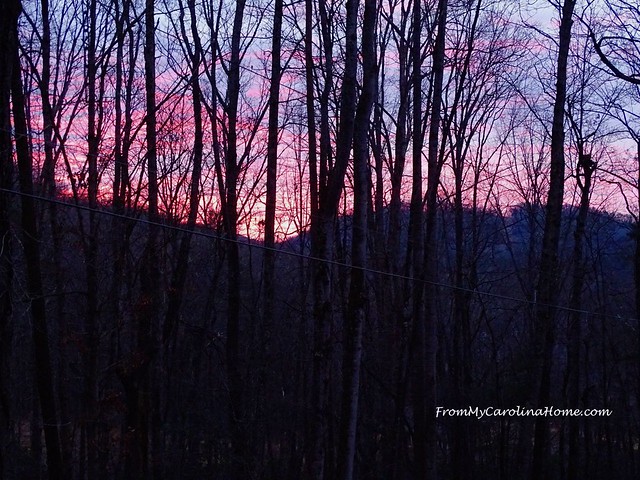 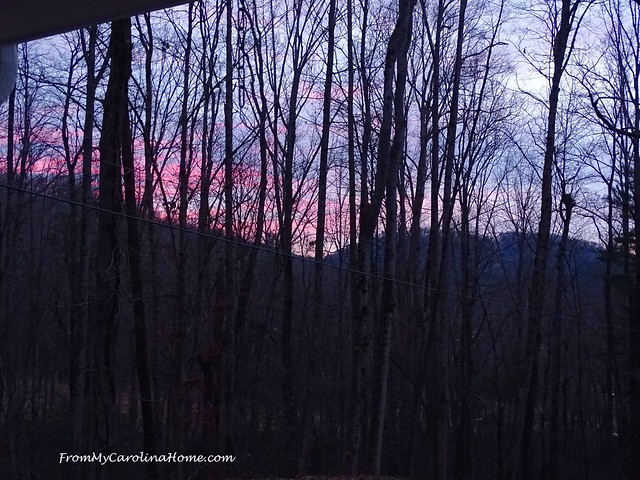 Outside a bit later, I noticed this hyacinth.  What is it doing coming up in January?  Not only that, but the pink bloom was superb, and had the sweetest fragrance! 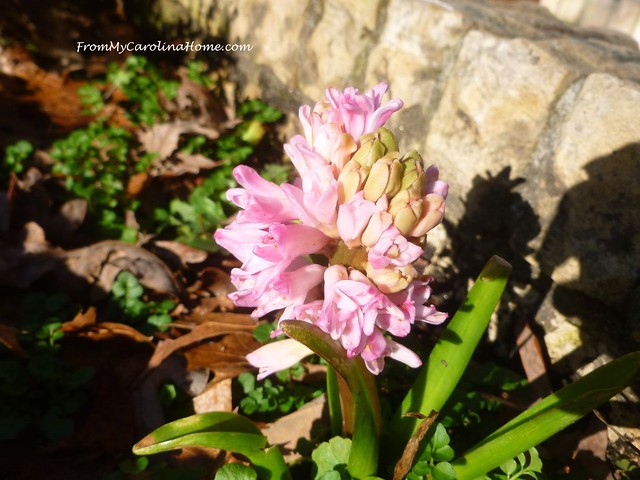 A day later, it was opening up really nicely.  But, there was an ice storm in the forecast and I was afraid it would kill not only the flower but the bulb as well. 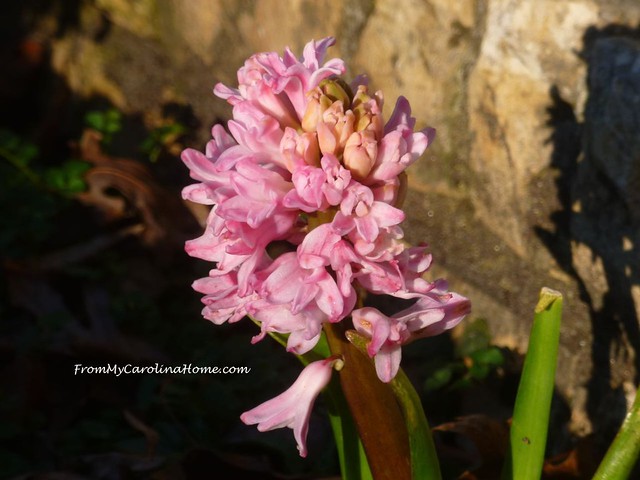 So, I dug it up and put it in a pot inside, adding to my little kitchen garden.  I’ll put it back in the flower bed in the spring. 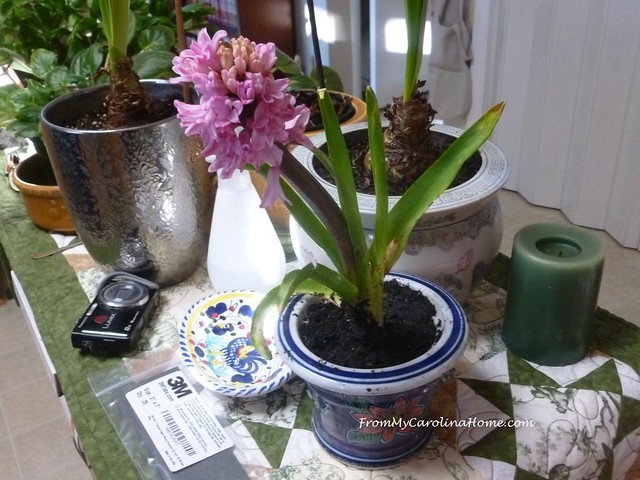 It continued to do well, opening up entirely and filling the kitchen and even the den with its sweet scent.  Hyacinths truly do feed the soul. 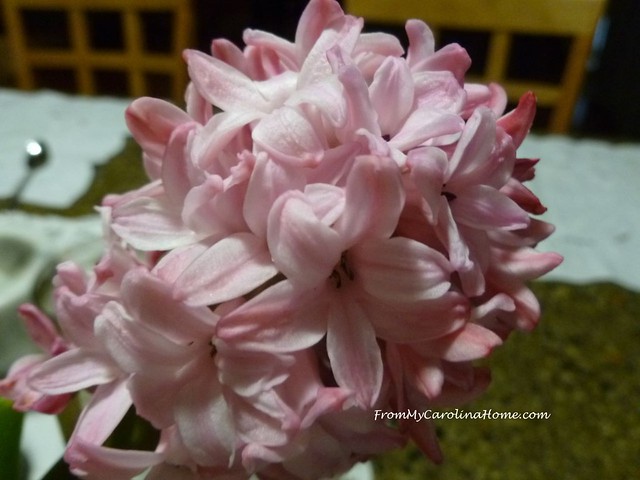 While it bloomed happily inside, the outside went to a winter wonderland.  Ice coated the trees and dripped off the bird feeder.  DH had just filled it the evening before in preparation for the bad weather. 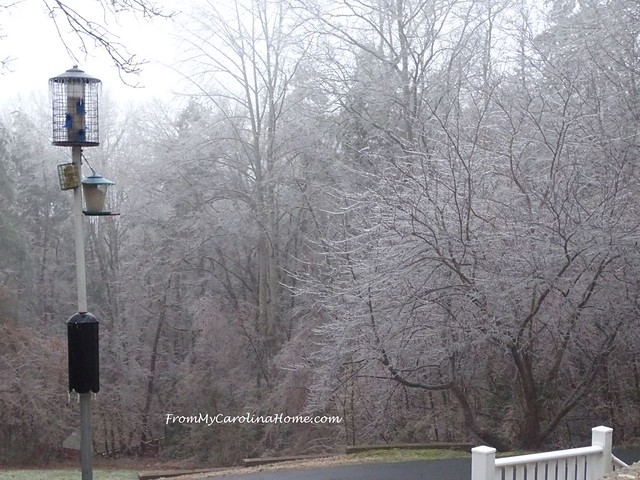 A little Carolina wren maneuvered expertly around the icicles to get a meal. 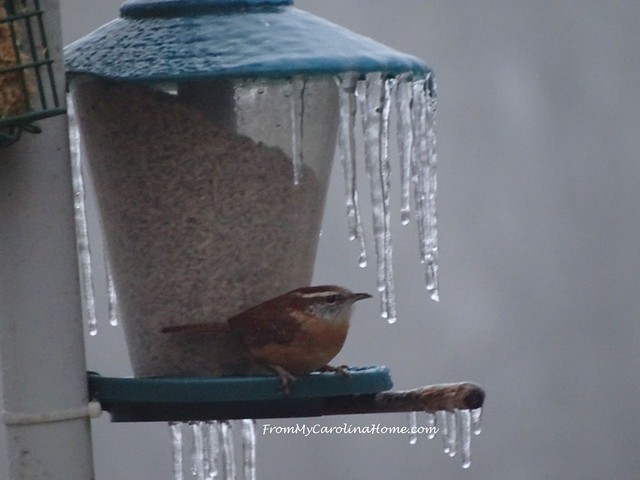 The suet cake was quite popular on this really cold day.  Bluebirds, goldfinches, wrens, nuthatches, titmice, cardinals, grosbeaks, towhees and even woodpeckers came by for sustenance.  Juncos and doves pecked at the seeds that fell on the ground.  DH put some seed for them on the ground too.  Squirrels got some of it, but that is OK, they need to eat too. 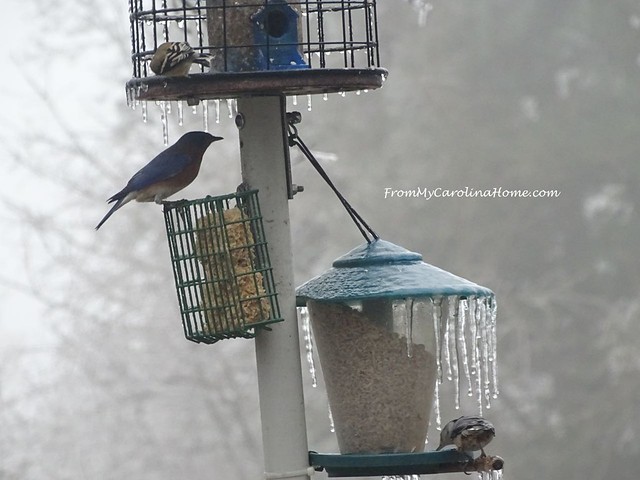 Little birds came and went all day, taking turns and working the seed down significantly.  These were the days when we lost power. 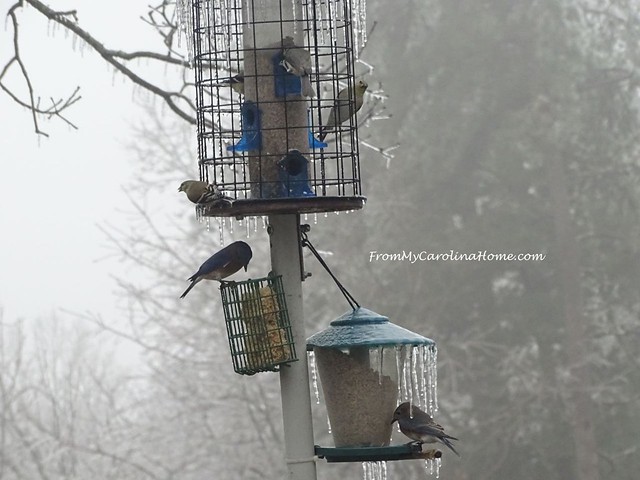 Beautiful, isn’t it?  The ice coating made the forest shimmer with light.  But, the weight brought down a lot of branches and some trees, including one down the road that took out our power. 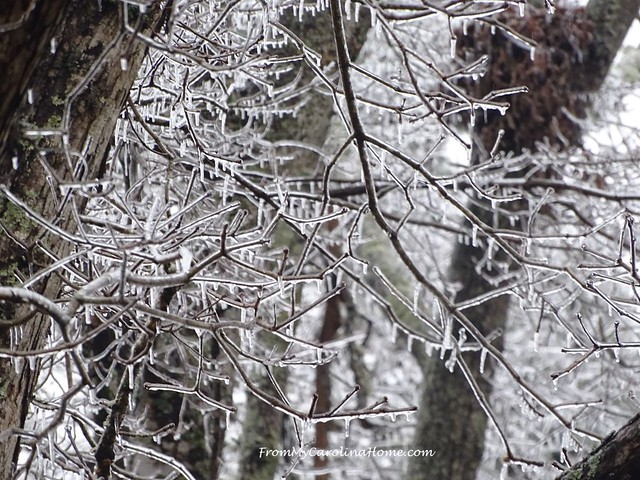 Back inside, I decided to take the advice of a reader and root a few of the violet leaves.  Flushing the plant did seem to help the stunted growth maybe a bit, the little leaves extended their stems just a bit, and I thought that maybe adding new potting mix would help it recover a bit more.  It remains to be seen if this will cure its ailment.  I’ll give it a few months, with some time outside this summer before deciding if it is recovered enough to keep it. 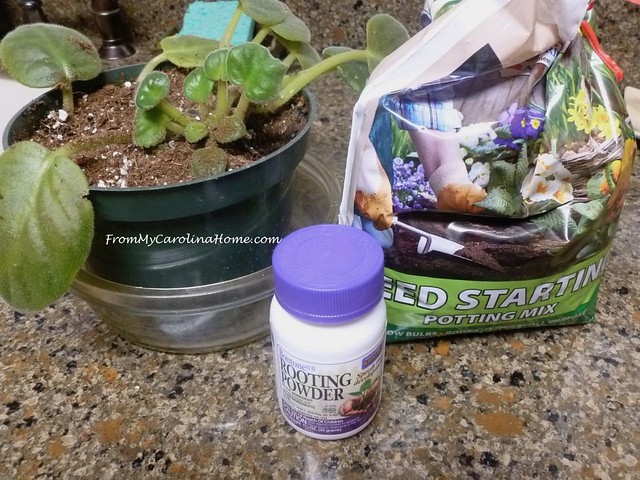 The two amaryllis bulbs I repotted last month have put up some nice leaves.  The Apple Blossom one, now in the silver pot, seems to be putting up a flower stalk just barely peeking up at the base.  The beautiful red one is in the Japanese pot, and so far hasn’t shown any flower stalk.  I still have hopes for it though. 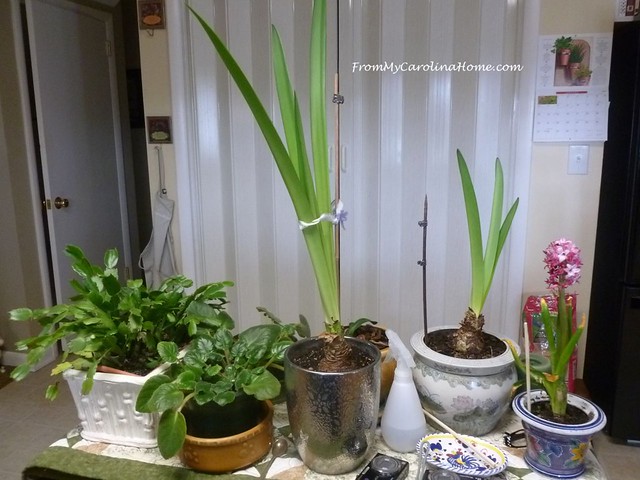 In the Carolina room, our three season porch out back, the geraniums, bidens, and parsley continue to survive.  This is the first time I’ve had a chance at overwintering some of my plants.  I am particularly pleased that the tall spike dracaena is still doing well.  It adds much needed height to the groupings on the veranda in the spring and summer.  I am watering only lightly, and just trying to keep them from freezing.  They get just a bit of direct sunlight in the late afternoon. 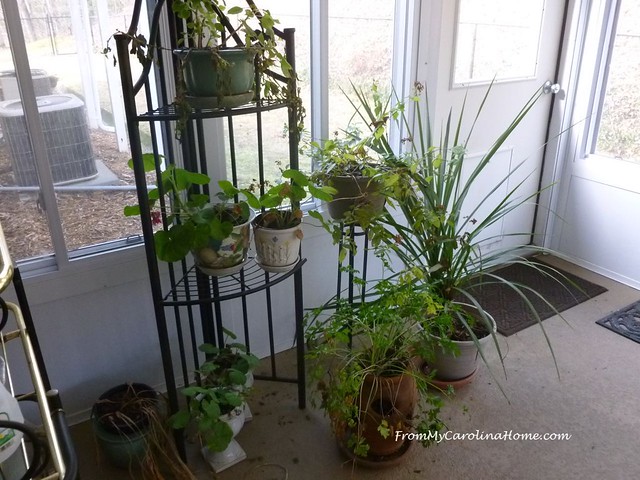 I’ve been studying my new Farmer’s Almanac for 2019 to plan my planting and I got a new Gardening Calendar for the kitchen.  The full moon on Monday was the Super Blood Wolf Moon, and a rare total lunar eclipse was visible in our area after midnight into the wee hours of Monday morning, but we didn’t stay up to see it.  Tomorrow through the 26th is a good time for planting flowers for warmer climates, but wait until the 27th and 28th to start seed beds or repot houseplants.  I’ll wait until the end of February to start mine, as I usually begin too soon.  It is hard not to get all charged up to plant with the seed catalogs full of inspiration!

22 thoughts on “January in the Garden”