Wildlife at our place has been prolific lately, with what seems to be autumn migrations in full swing.  I was very surprised one rainy morning to open the curtains and find 14 female turkeys in the front yard.  A large flock like this had two males with them last year, but this group was all girls.  I stepped outside with a slice of bread to see if they would like a bite.  Only two were brave enough to come up and see what I was offering.  They ate all the bites I gave them while the others just kept an eye on the action. 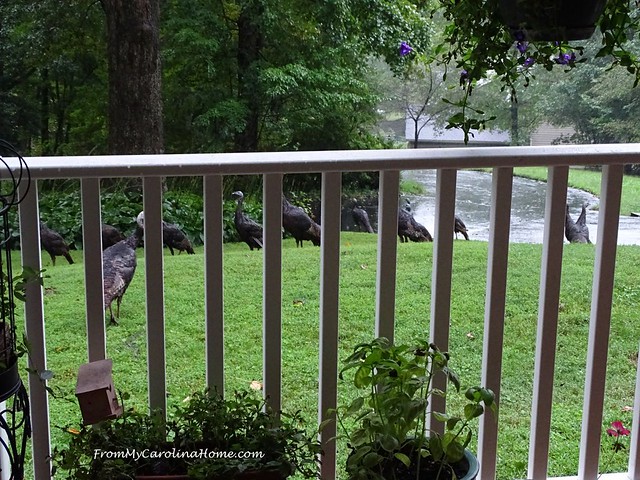 Then the turkeys wandered down to the meadow to scavenge bugs and acorns.  It was pouring rain this day, but that didn’t bother these gals. 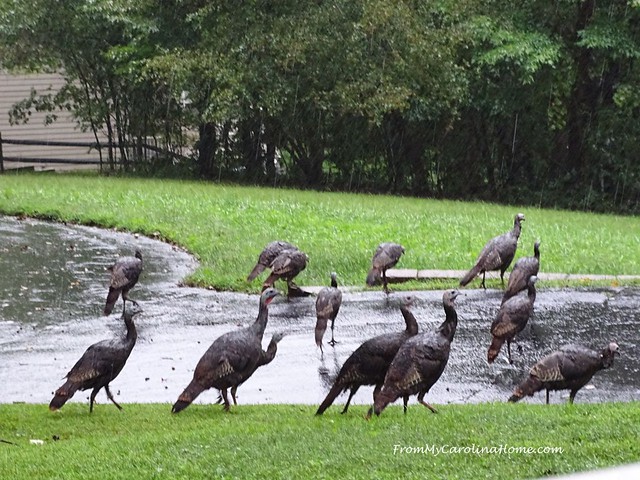 They mingled around for a while, digging for bugs. 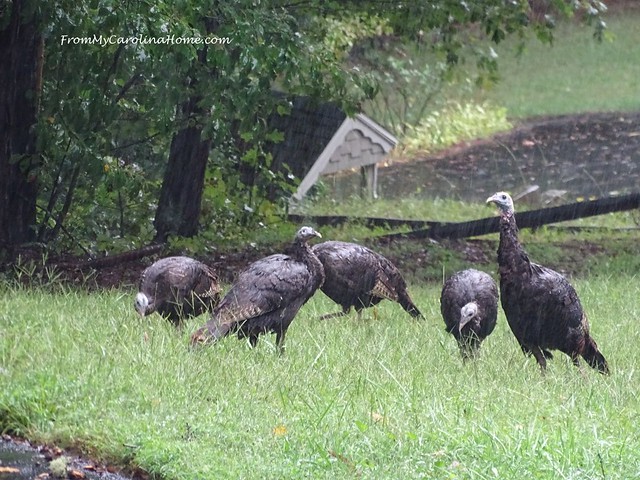 Then they strolled over the driveway into the forest. 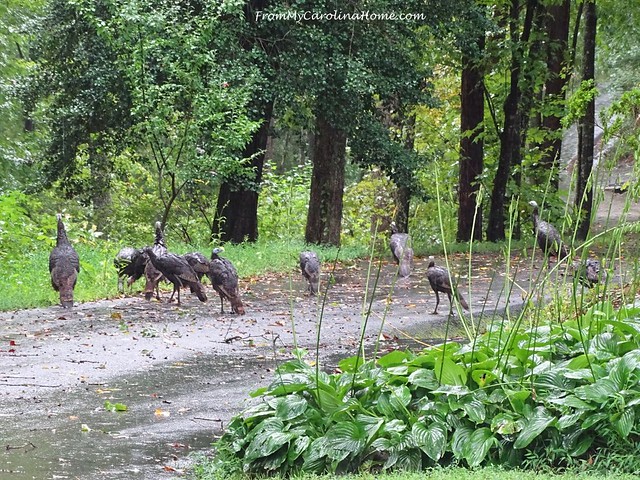 On this sunny day, our regular visitor turkey we call Clarence was at the veranda doing his cluck-purr hoping for a handout, while a female deer worked on my hostas. 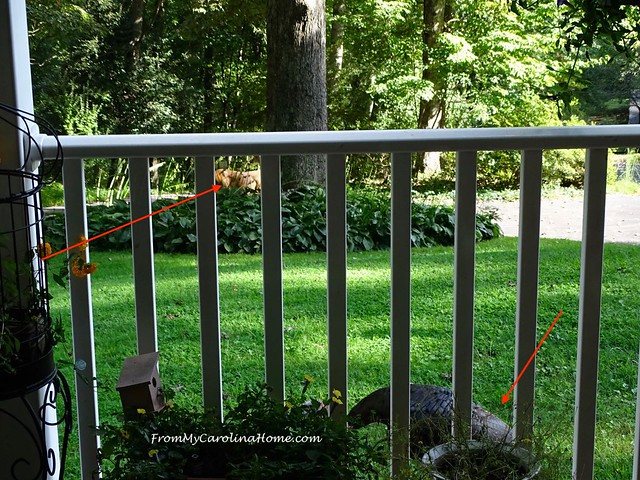 I am hoping to get the deer used to us, so when I saw two nibbling the hostas one morning, I slowly came out to the veranda and talked softly to them. 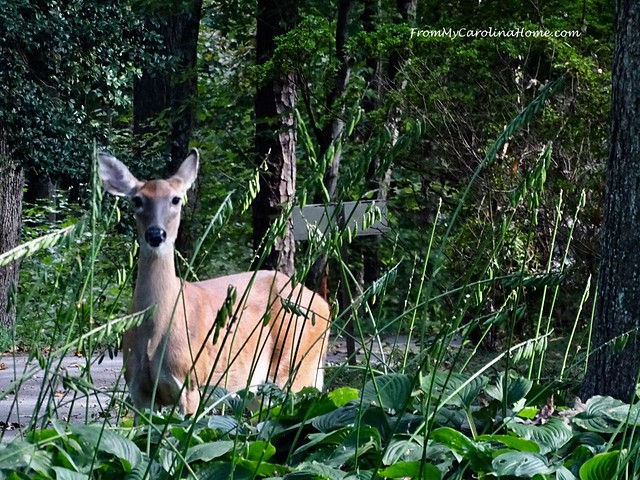 These two watched me warily, but didn’t bolt. 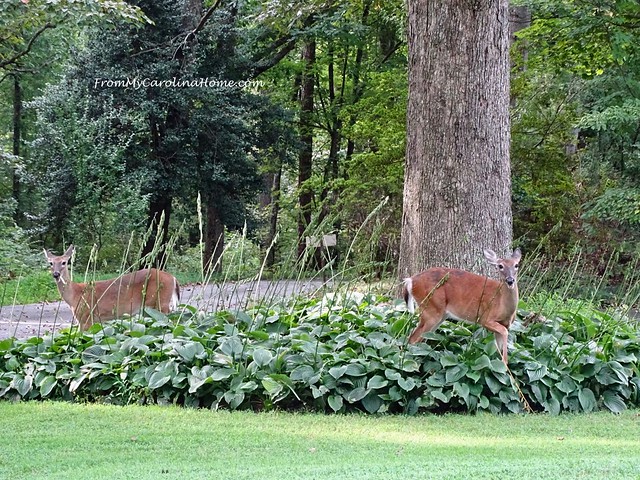 They moved off slowly, watching me the entire time. 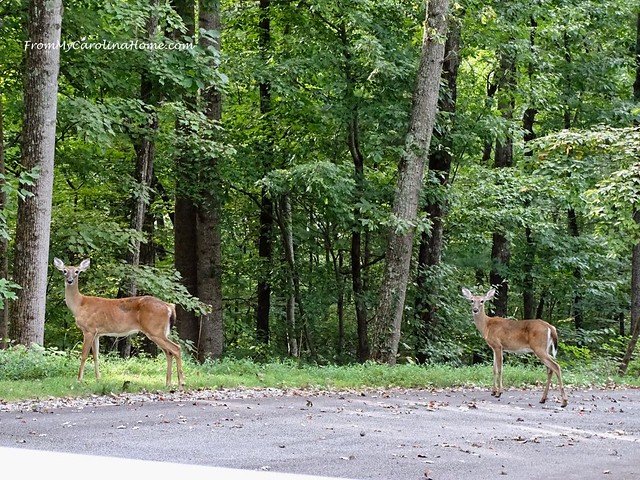 The hummingbirds came by almost every day for the past couple of weeks. 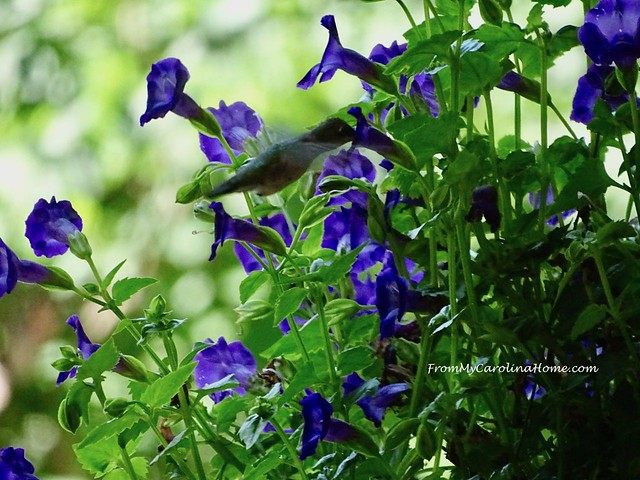 A smaller flock of 6 female turkeys with one strutting male visited recently.  I only got five of the girls in this photo.  They were pecking around for seeds while the male puffed and preened for them.  They weren’t interested.  But they did eat the offered bread bites I threw to them. 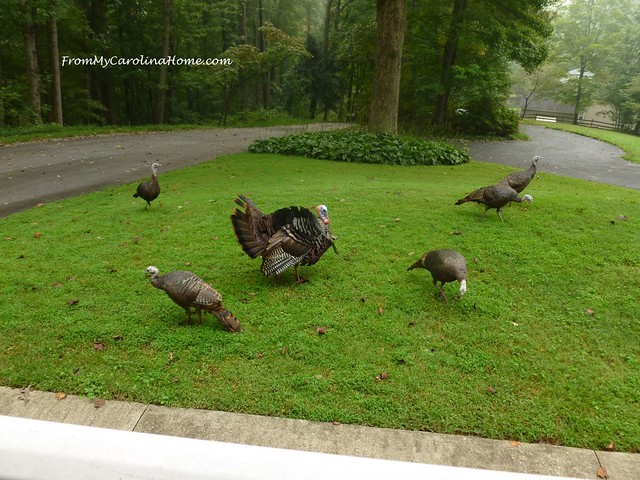 I love watching the males puff up and strut.  This one has new feathers growing in to replace some lost on his tail plumage. 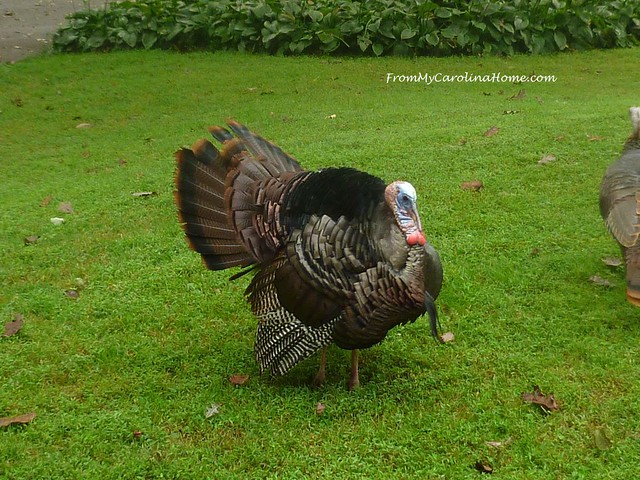 Here I got all six of the ladies, while he kept showing off. 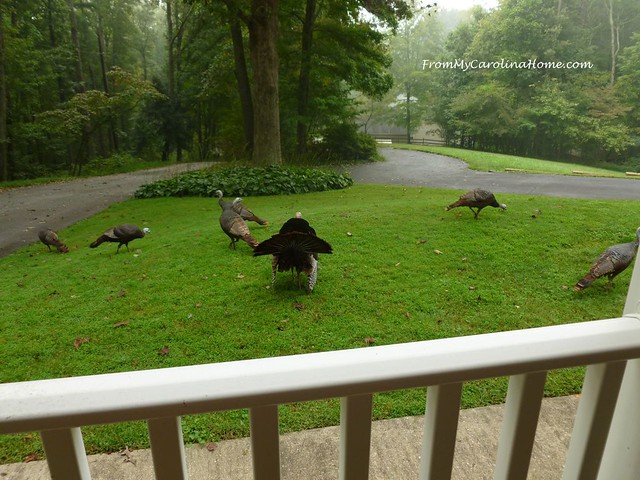 Titmice and goldfinches continue to share the feeder, with the new seed tube and bigger perches.  The goldfinches are beginning to get a bit dull, changing to their winter frocks. 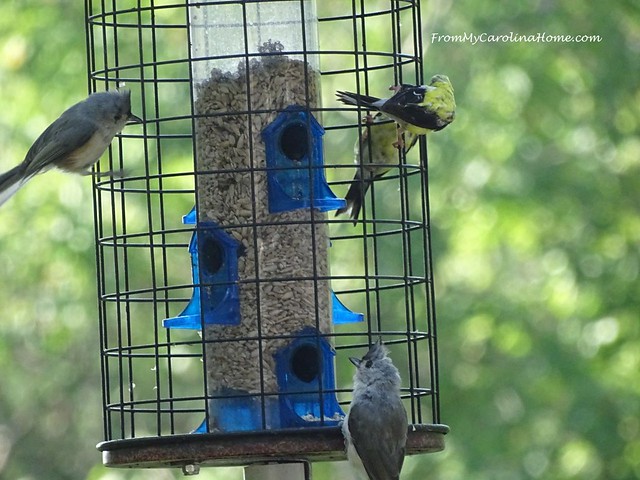 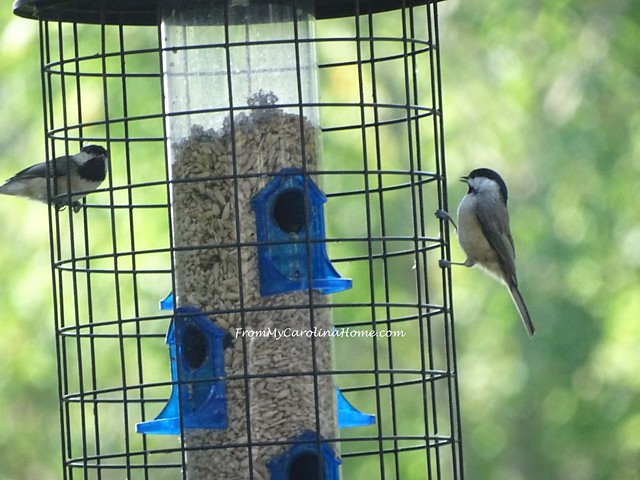 I have seen the cardinals too, mostly at dusk when it is hard to get a picture. The male was feeding the female earlier this week, such a sweet thing to watch. A rose-breasted grosbeak stopped by, we haven’t seen one of these since last fall.  I think he was posing for the picture, as he cocked his head a bit sideways.  Then he went back to stuffing his beak full of seeds. 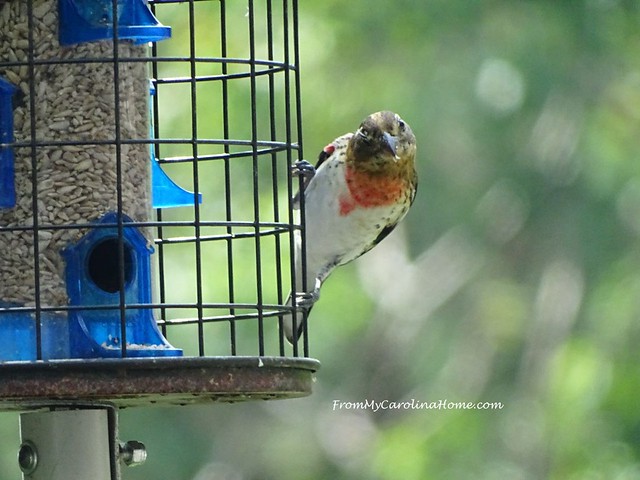 The hairy woodpecker has figured out the new seed holder.  His beak is long enough to reach inside and snag a bite. 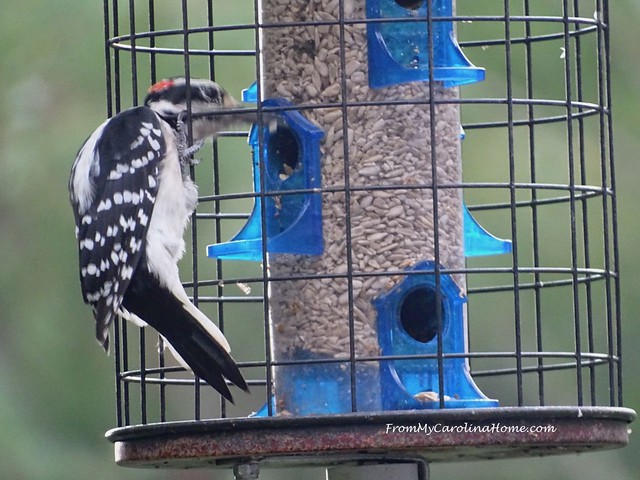 A mother deer brought her two fawns to graze the meadow just a few days ago. 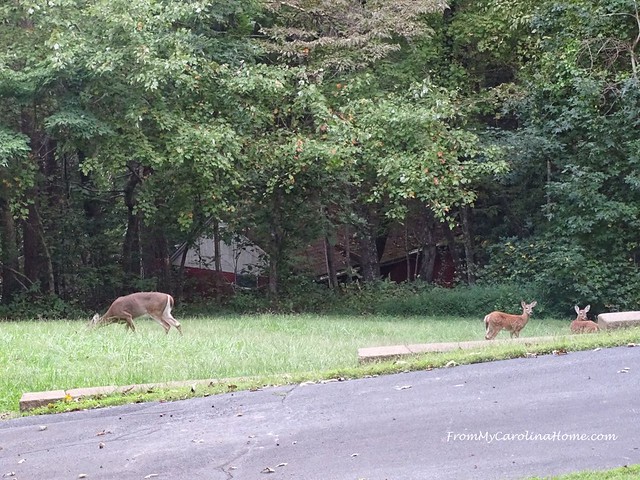 They are growing up from the time I saw them in the spring. They are bigger but still have their spots. 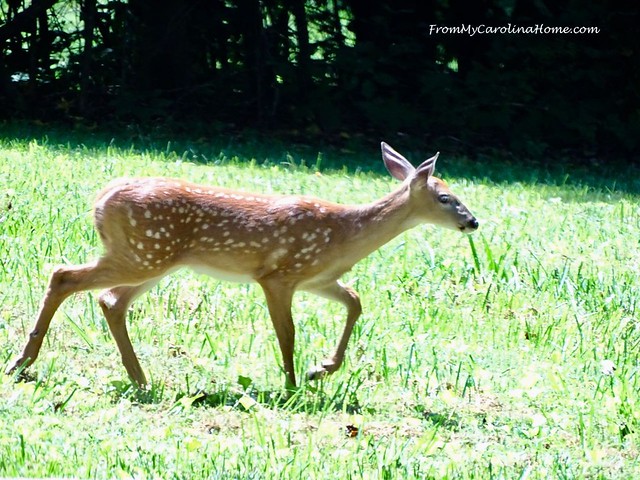 They were really cute, flicking their ears up as I softly told them they were adorable. 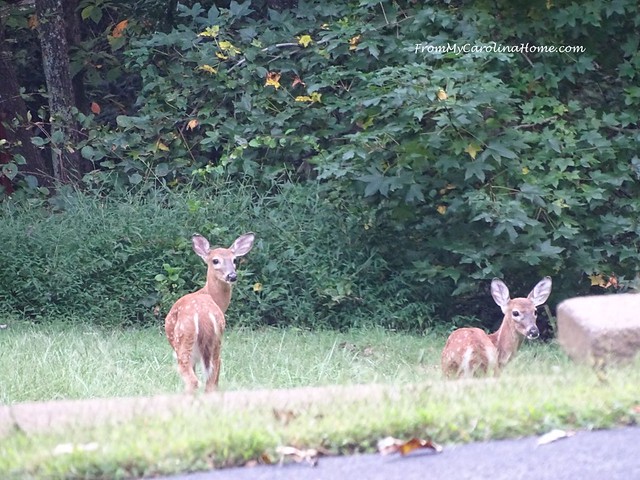 I stood quietly, and mom lowered her head to graze again, while keeping an eye on me. 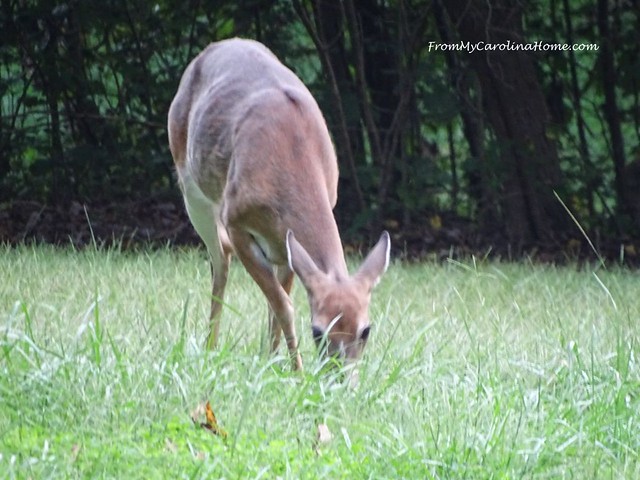 She headed back into the forest short time later, but it was progress. 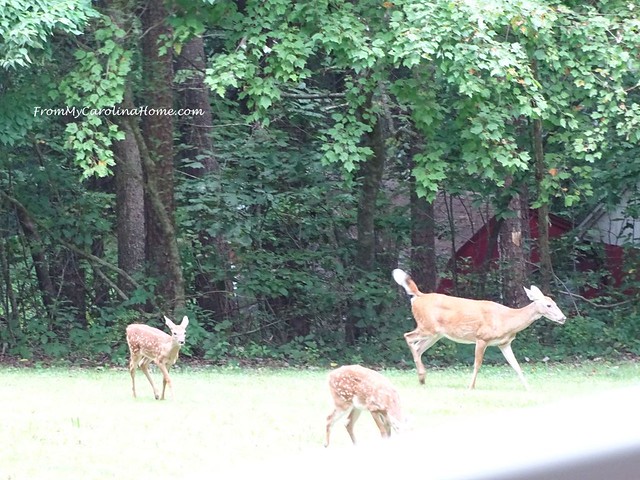 Another hummingbird buzzed by my head, so I got her picture too. 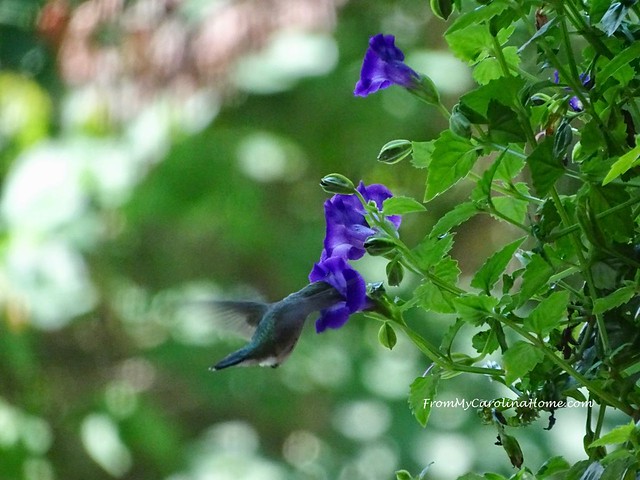 I almost got a photo of the fox again as he was up very near the house. But just as I reached for the camera, DH noticed Clarence on the lawn and he thought the fox was stalking the turkey.  So DH opened up the door and began waving at Clarence hoping to make him take flight, and the fox got spooked instead.  The fox ran back into the woods, and Clarence was safe for another day.  Of course, he got a handout that day too.  Just yesterday, a flock of Canadian geese went by, honking and flying in their V formation.  We saw a group of them while walking the Oklawaha trail this week, too.

If you missed the post on the Carolina Hurricane Quilts, click HERE to see the block and the plan.  For now, I hope you can make some blocks, but please do not send them until later in October or early November as my studio is covered up with Autumn Jubilee right now.  I’ll have an address on an update post in November after Autumn Jubilee.  Ideally, your blocks and your friends blocks can be made into a finished quilt, and I’ll have a different address for completed quilts in November.

Are you seeing any migrating wildlife in your area? 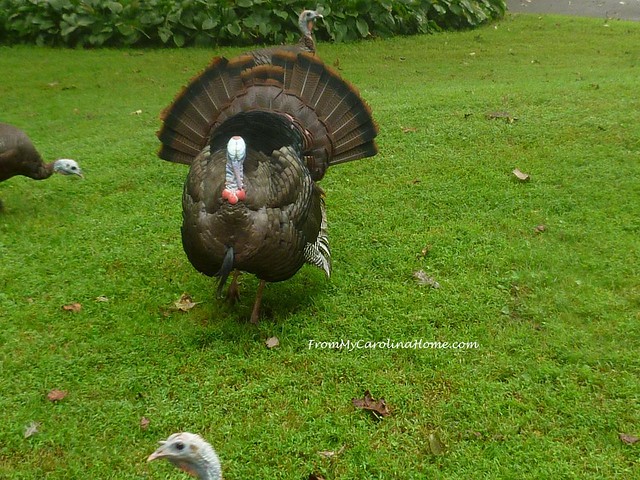