Ikebana is the art of arranging natural elements in a display.  The art is over 500 years old, beginning around the time of the advent of formal gardens in Japan.  Bringing the natural world inside is something we all do, picking flowers from the garden to display in a vase on a table, or bringing in pine cones to decorate for fall.  In Ikebana, there are many ideas, but as is usual for the Japanese culture, each element has meaning and purpose.  The Asheville chapter of Ikebana International held a show last fall, showcasing three schools of Ikebana – Ichiyo School, Sogetsu School, and Ichiyo School.  Although the arrangements were labeled with the school, there was no information on how they differed.  So, we just had to enjoy them as they were. 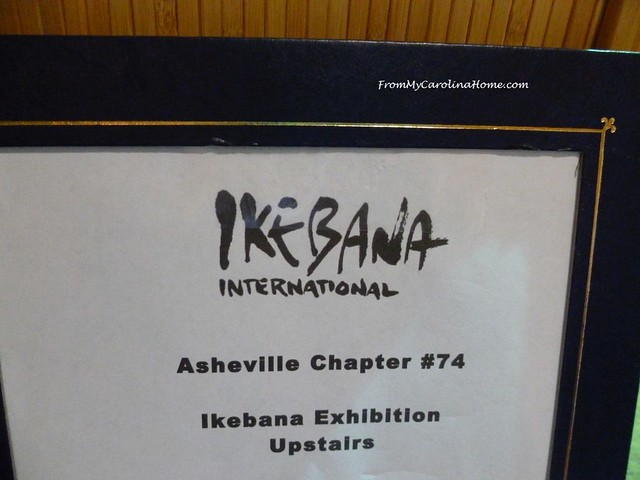 From research, common to most Ikebana is the overall triangle shape of unequal sides ( a scalene triangle), minimalism, and emphasis on shape and line over flowers. 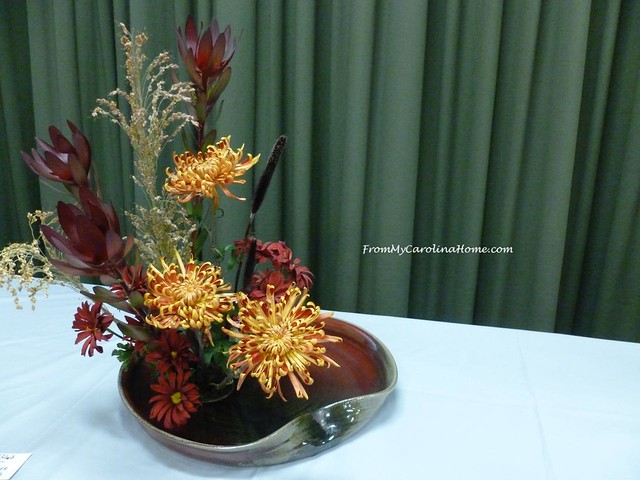 Generally, there are three stems in the arrangement.  The longest stem called shin represents heaven and is one and a half times the longest dimension of the container. 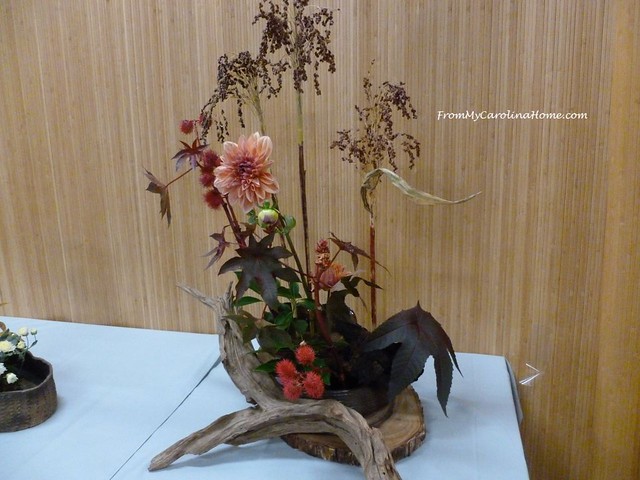 The second longest stem represents earth, called soe, and is three-quarters or two-thirds of the length of the shin, depending on which school is followed. 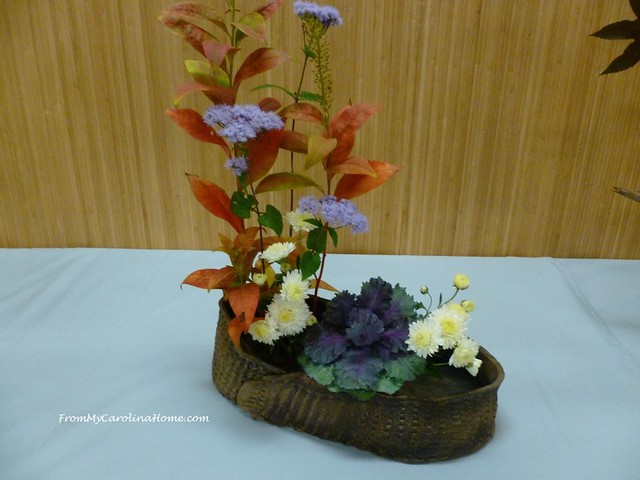 The third stem called the tai represents the people, and is three quarters or two-thirds the length of the soe. 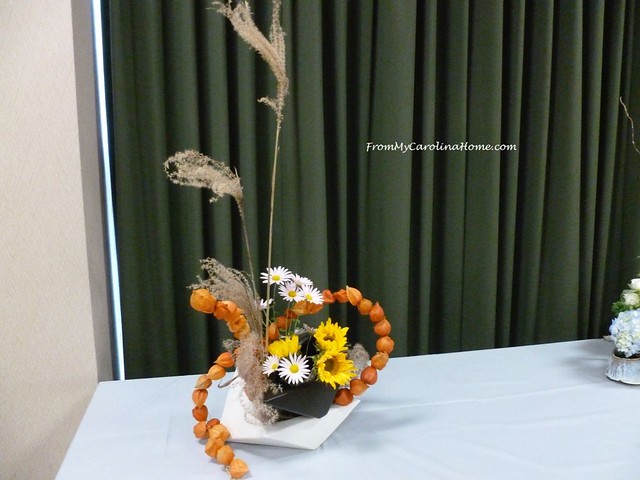 In some schools of Ikebana, the second longest stem represents man, and the shortest represents earth. 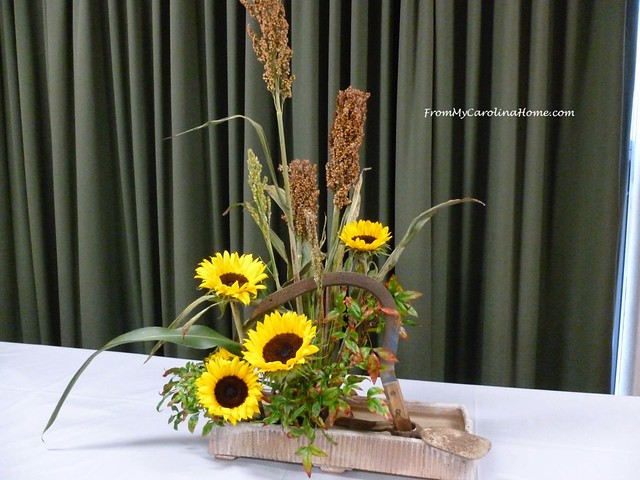 There are more than 3000 schools of Ikebana, with teachers all over the world, and many conflicting ideas between the schools. 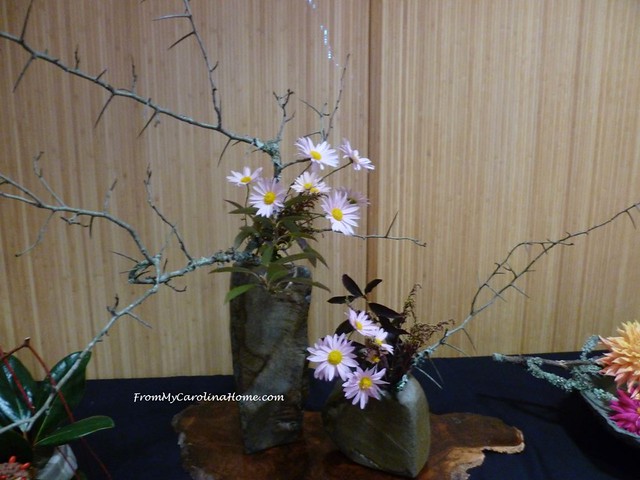 However, they all seem to have some common ideas.  Shibui means subtlety.  This one is from the Ichiyo School. 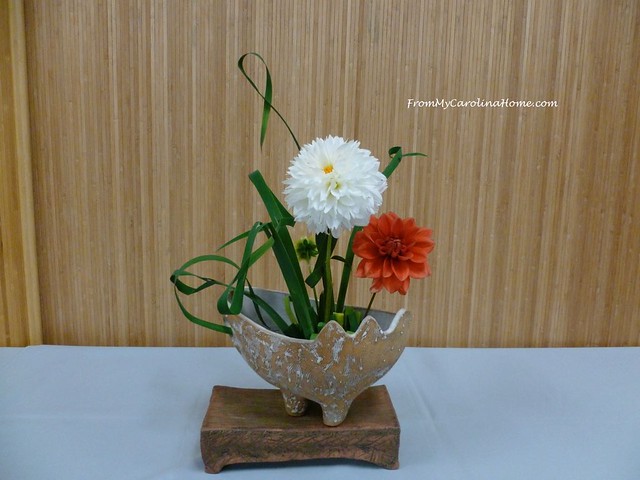 Iki means original. An artist from the Sogetsu School showed this arrangement, unusual in it is three containers with the shin, soe, and tai split between them. 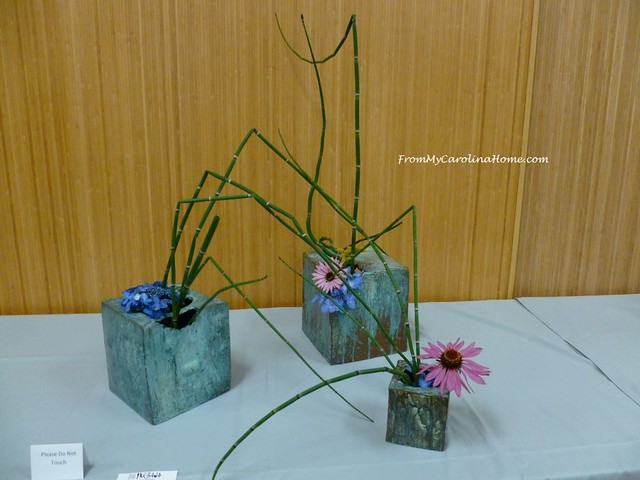 Ensou means void or negative space, and some of the arrangements drew your attention to what was not there, like this one with no leaves on the branches. 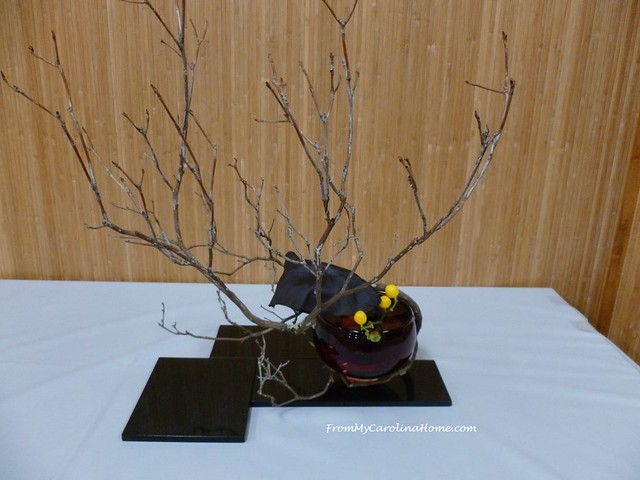 Miyabi means elegance.  This basket shape with the illusion of water at the base still has an unequal sides triangle shape overall with all the elements considered. 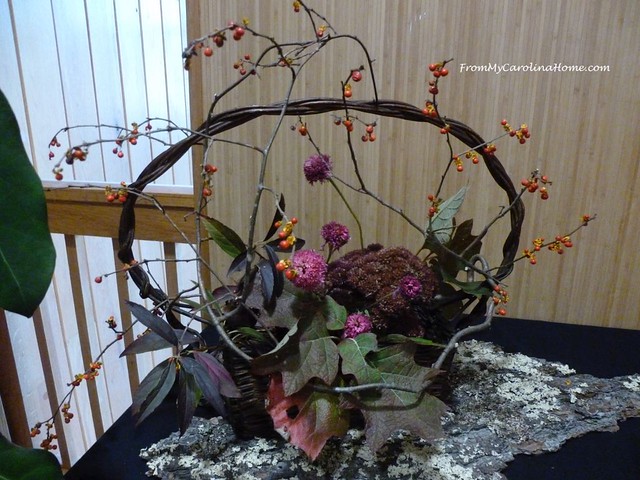 Geido means discipline, resisting the urge to fill in spaces, limiting the arrangement to just what is needed. 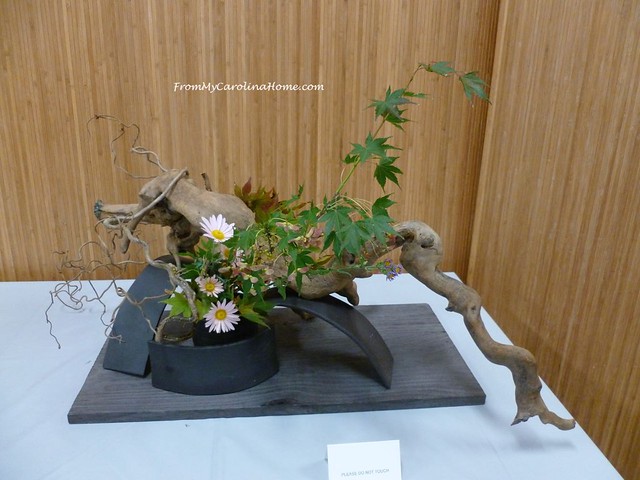 Some Ikebana reminded the viewer of bonsai. 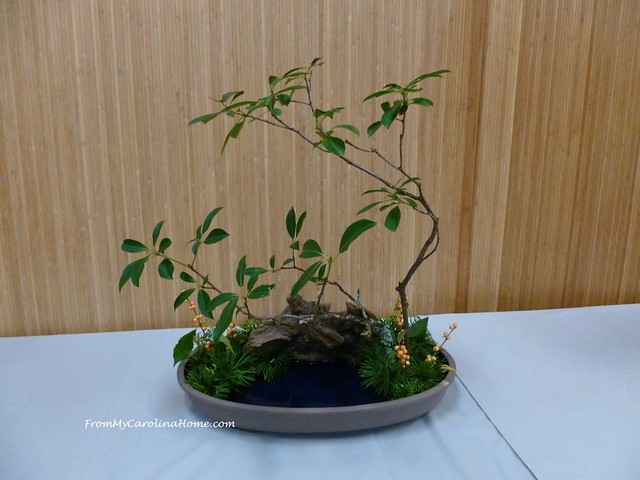 Yugen means mystery, depicted in this arrangement, the viewer may wonder where the water is coming from, and where it is going.  Note the tall shin branch, 1-1/2 times the width of the container in total height, not in total length due to the interesting twists in the branch. 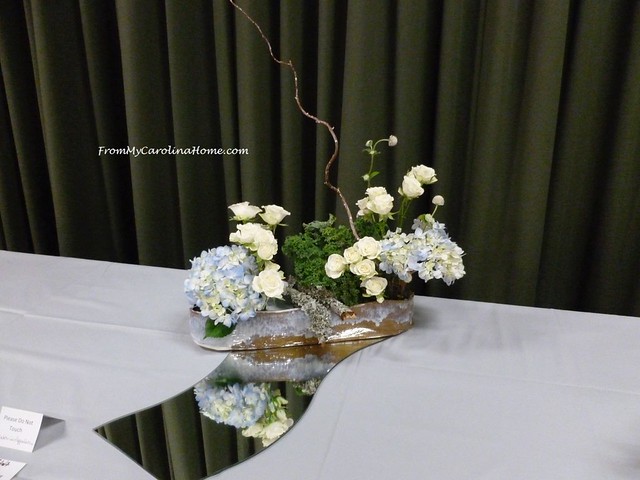 Wabi-sabi means imperfection, perhaps in this arrangement a graceful line not perfectly straight, or some flower buds only partially open. 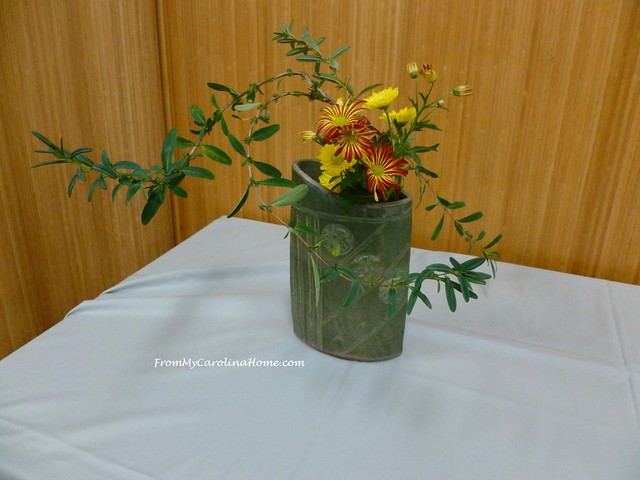 Most of the designs conformed to the preference for odd numbers, particularly 3 and 5.  I liked this one with the lichen covered branches, and three flowers from an artist with the Ichiyo school. 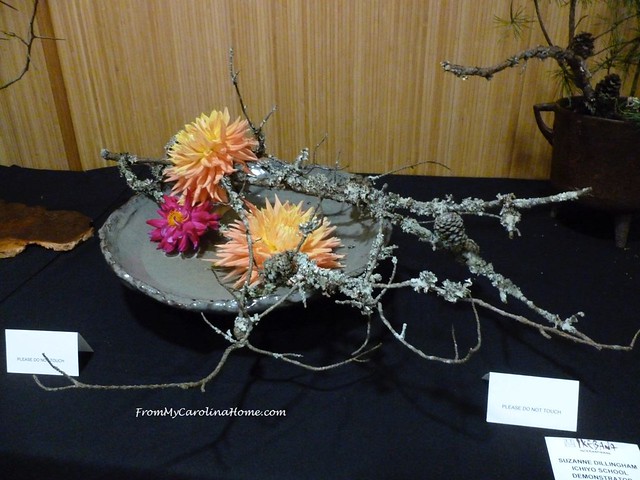 Near the windows, three more designs from the Ikenobo school of Ikebana.  These used more Western ideas of floral arrangement. 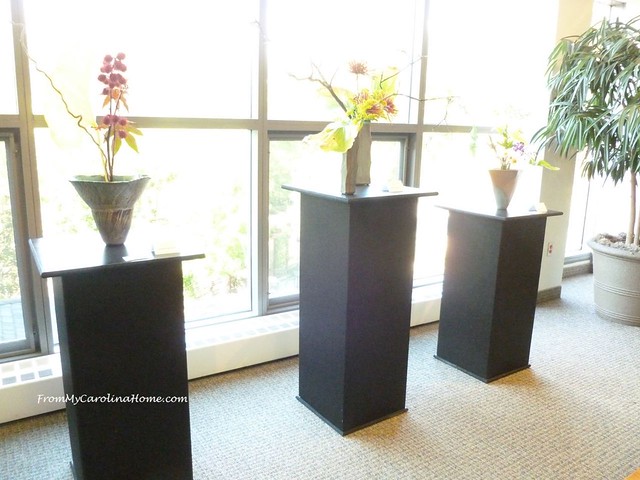 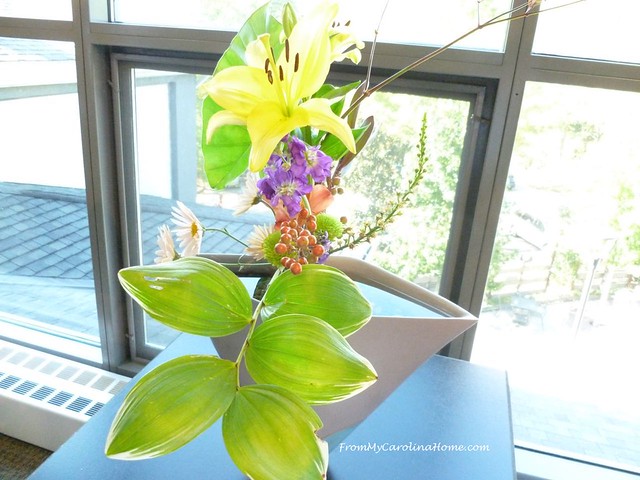 One of these days I’ll give this a try.  I went to two stores looking for a floral frog and cannot find one, but there are more places to look.  I’m just not in a hurry to find one.  If all else fails, I’ll order one of THESE from Amazon.  I have a couple of trays that might do well, just need to give it some more thought.  There are a couple of books on Ikebana now on sale at Amazon, thank you for using my affiliate links –
Ikebana: The Art of Arranging Flowers
Japanese Ikebana for Every Season
Keiko’s Ikebana: A Contemporary Approach to the Traditional Japanese Art of Flower Arranging
Exploring Ikebana

9 thoughts on “Ikebana – The Art of Arranging”