Winter Lights is an event at the NC Arboretum for the holiday season, and is just magical.  It is a major fundraiser for their programs and exhibits, and you can attend any evening in December through the 31st.  We went on the last warm night before the recent cold snap and snow fall to enjoy almost 500,000 LED lights.  Tickets are only available online and members get a discount, see the exhibit information at Winter Lights. No affiliation, just fun. 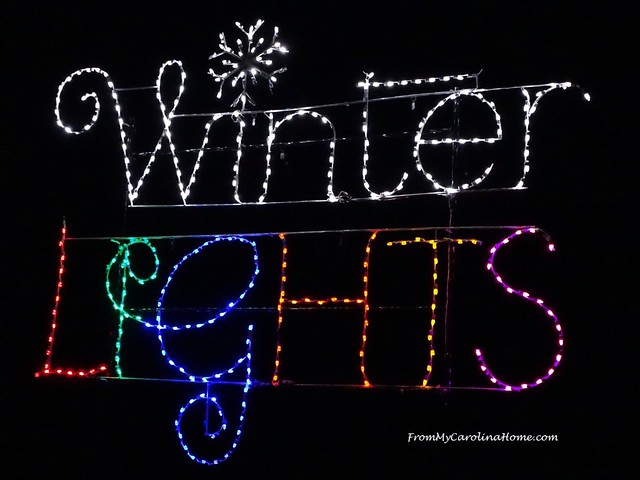 The first view of the thousands of lights is in the parking lot, where the trees are lit in red, green, purple and blue. 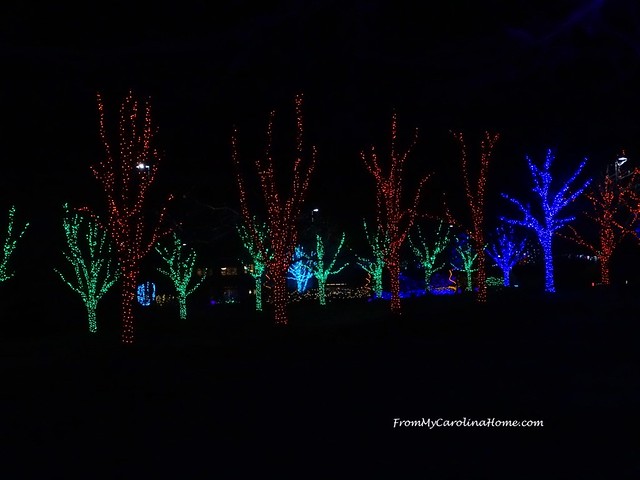 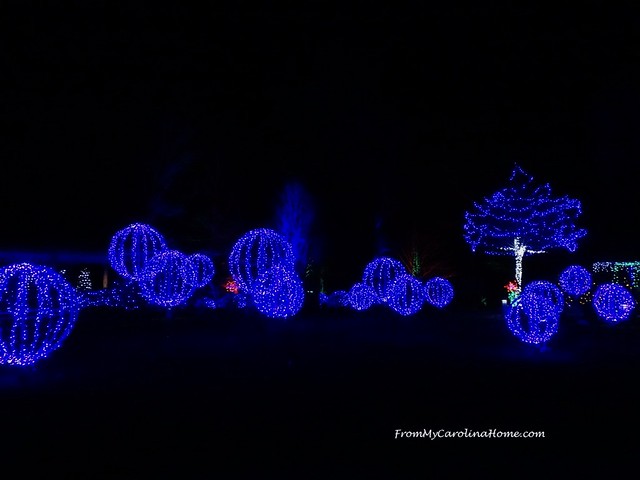 The blue orbs turned green after a moment, then red and back to blue. 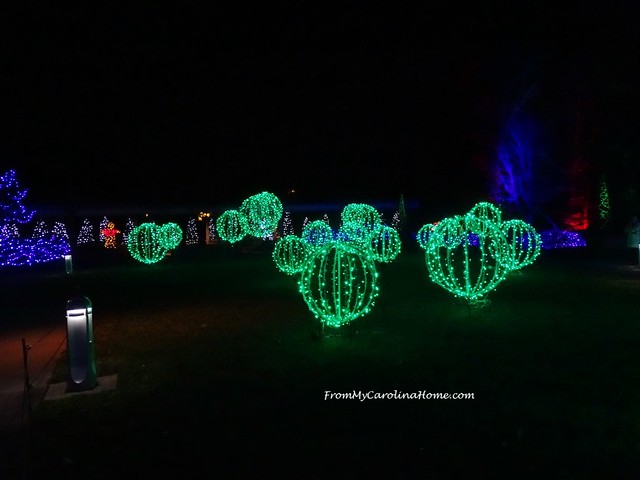 The gumdrop lined path led through a red and green lit covered bridge. 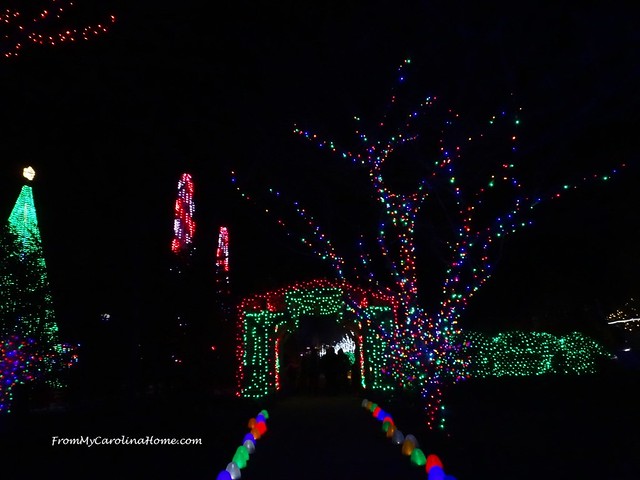 White lights drew the visitor onward to see what was next. 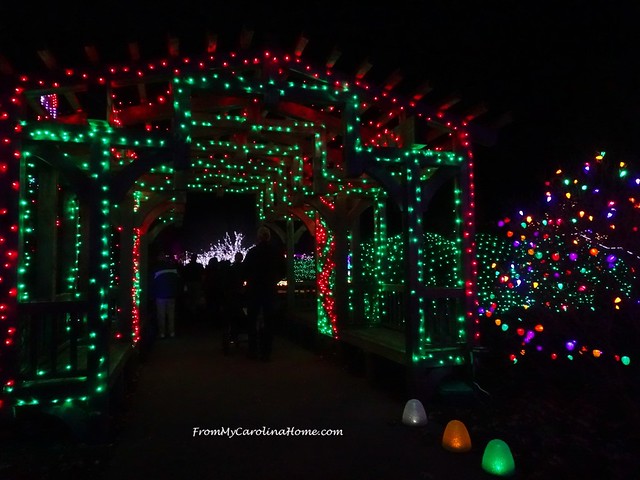 As we got near to the quilt garden (I’ve shown this when it was in bloom last spring), we heard Christmas music. 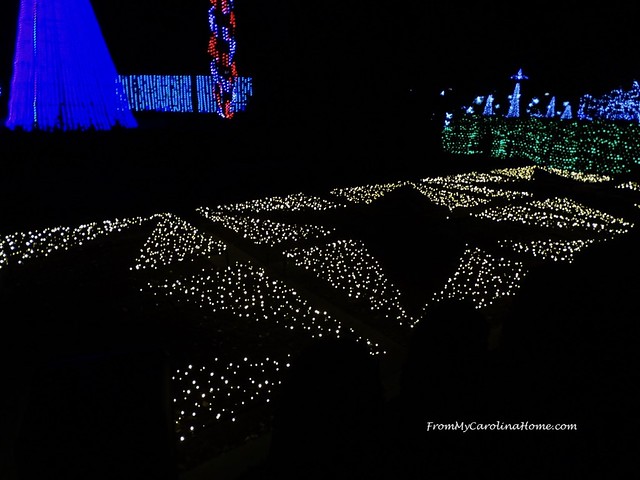 A light show was synchronized to the music, with the quilt blocks flashing in colors lighting up the star patterns. This show was called Dream Quilt. 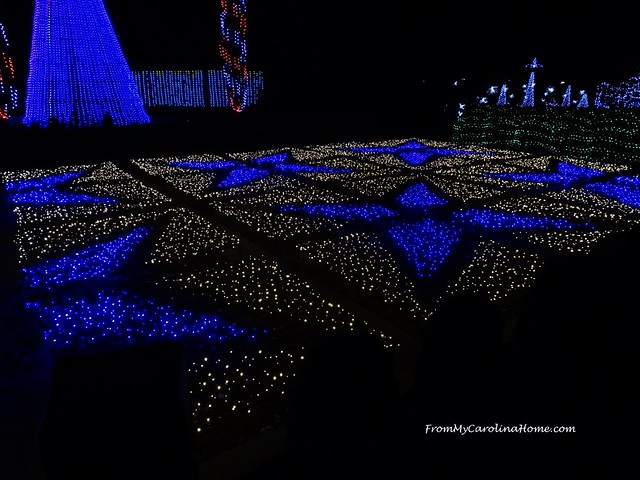 It was enchanting to watch! 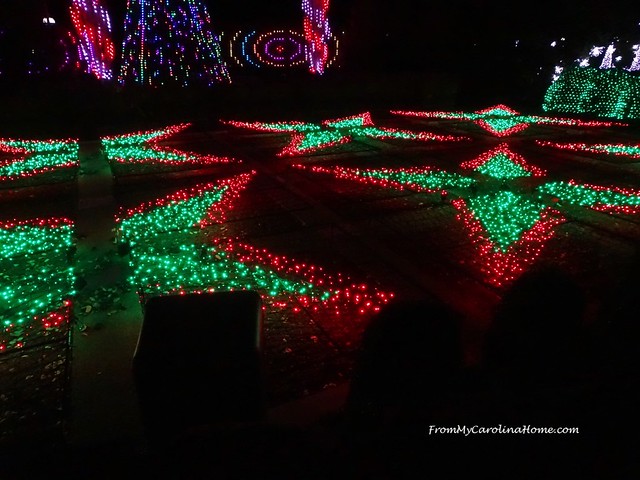 The large Tree of Light, two columns and wall of lights behind it were also changing as the music played. 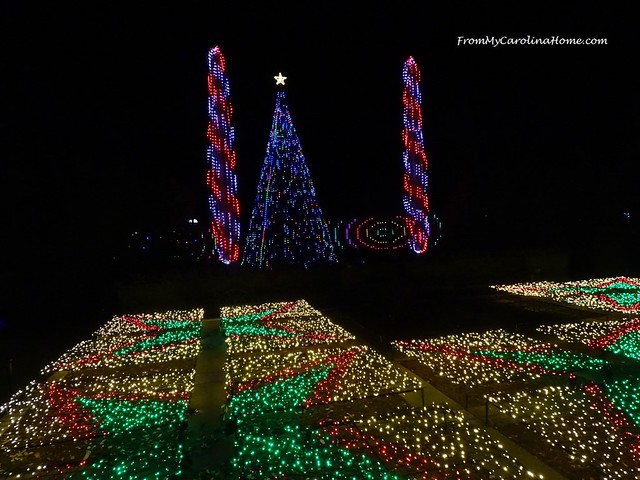 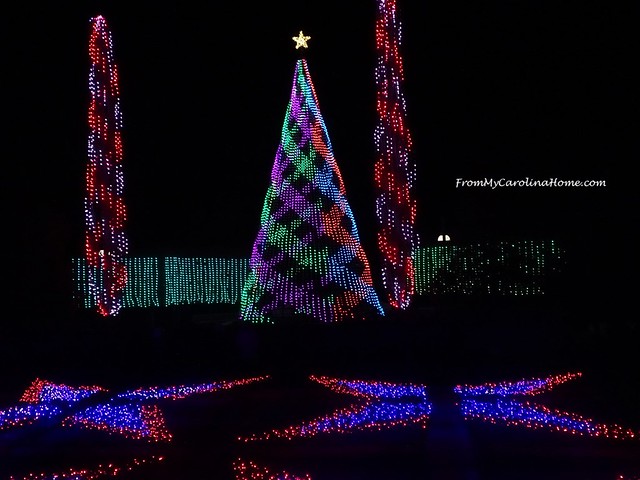 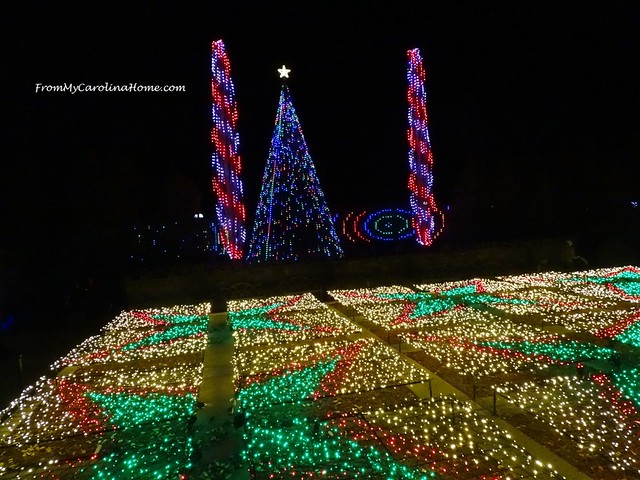 So fun we stayed there for several songs, just watching the light show and enjoying the music. 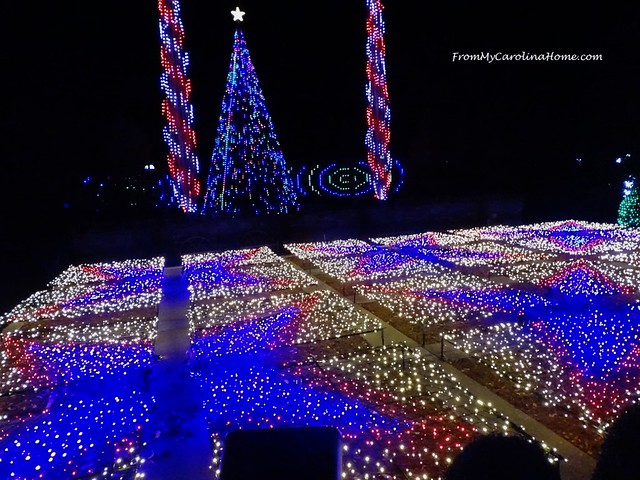 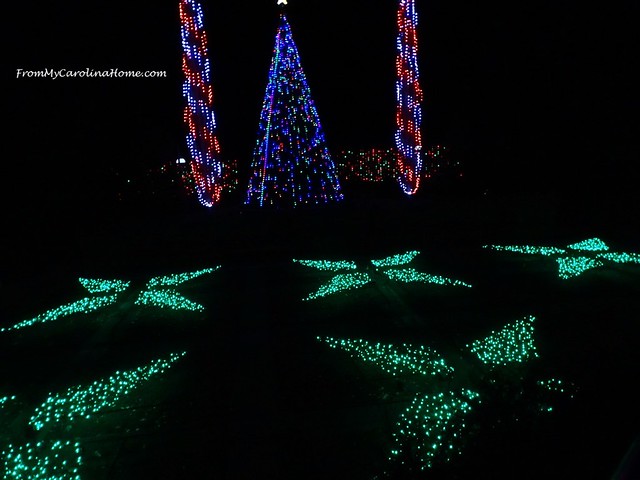 Finally, moving on to the Shimmering Stream part of the show, all white lights cascade from the trees. 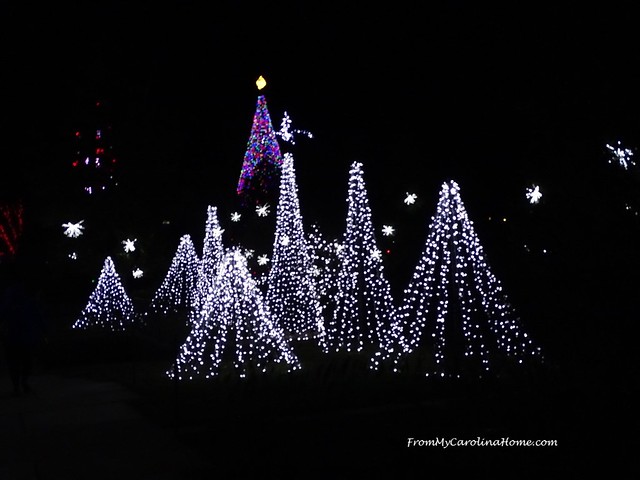 There were Reindeer Games, a couple of fun things to play with. One was a tic-tac-toe game, where you touched a button on the board and it lit up a square on the game lights. We played one game, with DH playing with green lights, and I was the white snowflake ones. I won. 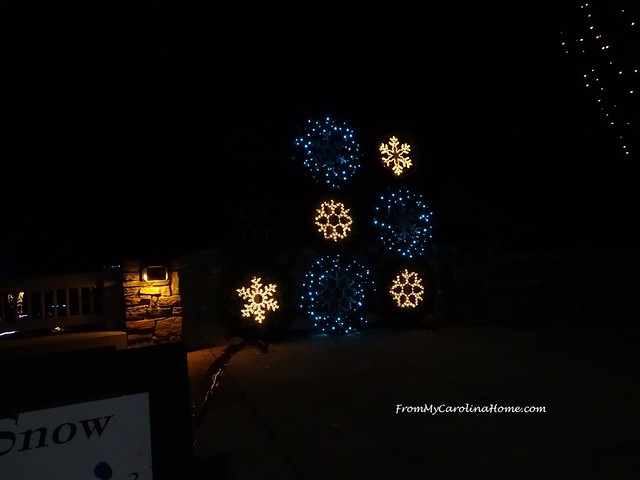 Snowflake Way was a covered light walkway with snowflakes hanging above. 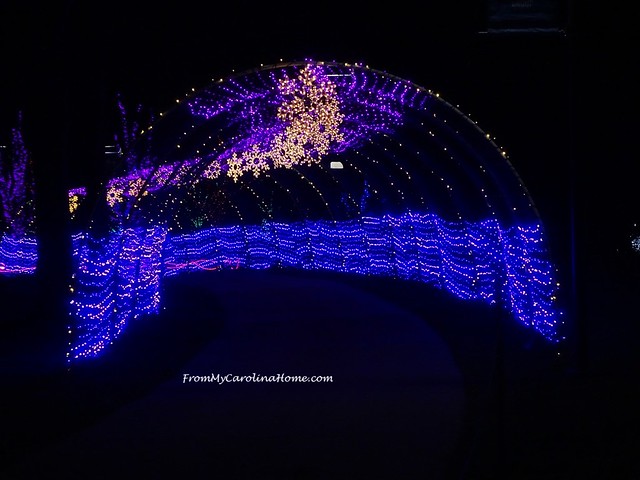 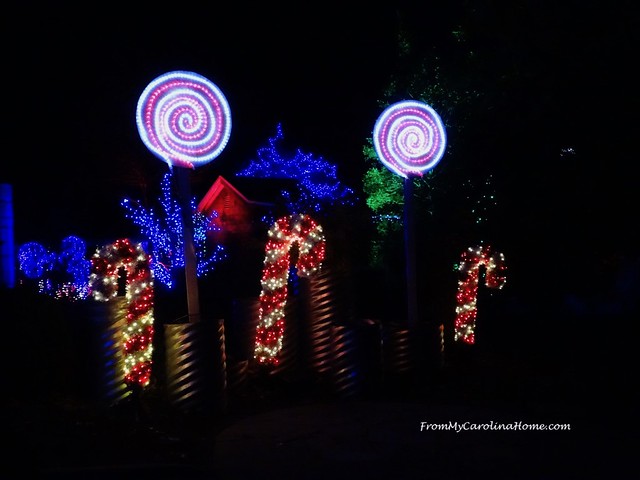 If you were cold, the Cocoa Shack had hot beverages. 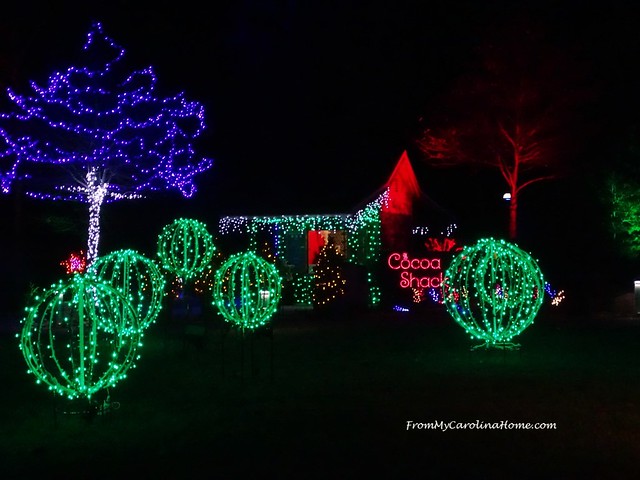 Still on exhibit now is a really fun indoor exhibit called Wicked Plants, all about poisonous and prickly plants that can harm.  Set inside a run-down Victorian home, there are fun interactive things to see, and a really interesting ‘murder mystery’ inside one of the rooms.  You looked around the room and tried to figure out how the victim died.  DH and I did the mystery, looking at the ‘clues’ and examining the ‘corpse’.  There is a cabinet in the room with printer’s trays in it.  When you think you have solved the mystery, you pull out the top tray.  Depending on the answer to the question, you pull out another tray lettered B through E.  That tray will tell you if you are right or not.  We got it right.  I pulled out one of the other trays to see what it said, and it told the reader to go look again.  Wicked Plants will be on exhibit until January 7.

Back outside, there were three firepits where you could stop and get warm. 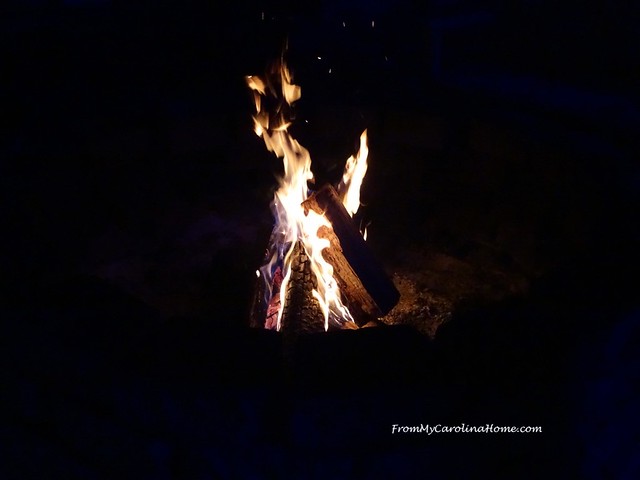 There were lit figures here and there, like this blue heron. There were more but this was the only photo that came out well. It is very hard to get good pictures of lights at night. 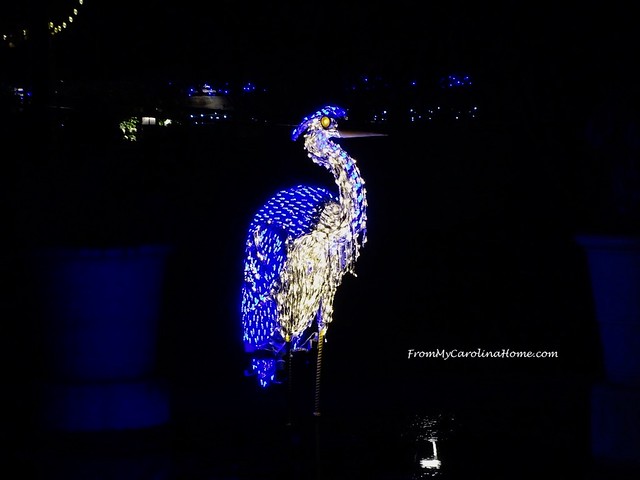 Some of the Bonsai trees had lights too. These were brought into a greenhouse area to protect them from the harsh cold. 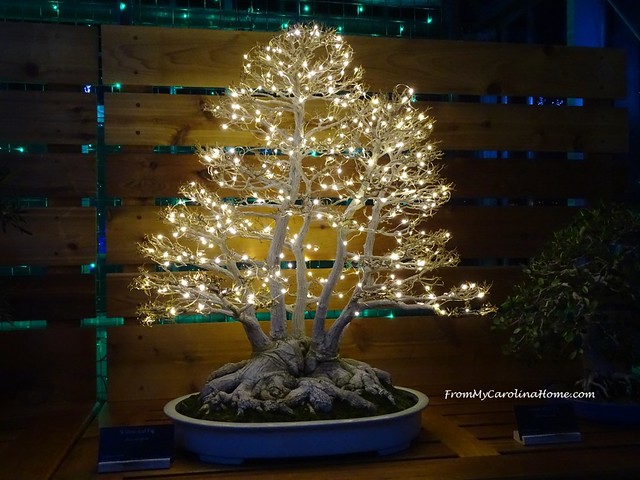 Another one had blue and white lights. 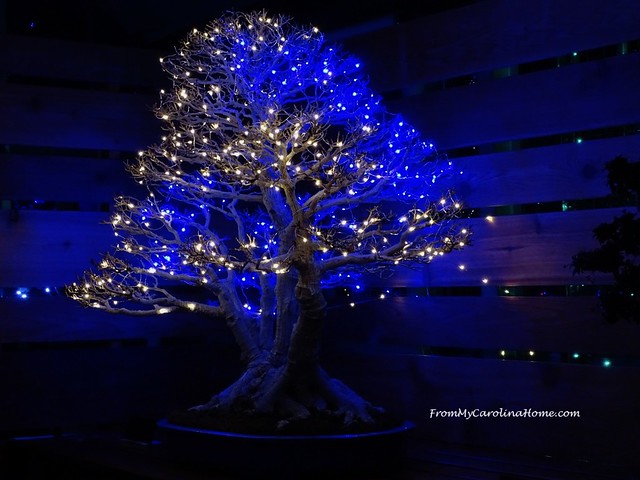 Back out to the parking area, we headed home after a very fun evening. 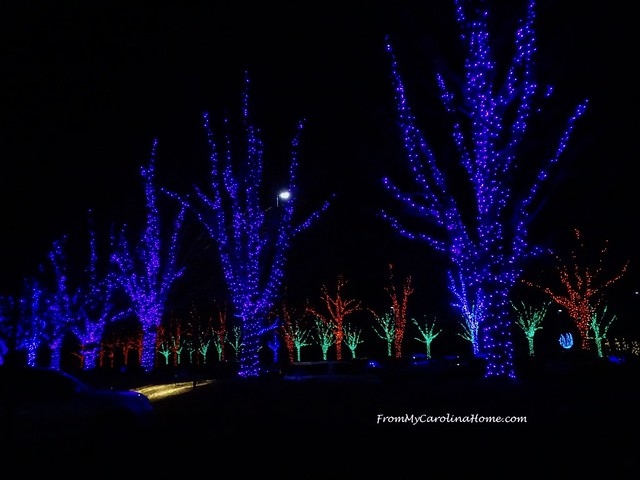 We are planning to see the Lake Julian show before the season is over. I like these smaller light shows in natural settings better than the huge ones with lines of traffic winding through parking lots.  Happy Hanukkah for my readers celebrating the Festival of Lights this week.

Do you enjoy light shows like this? Are there any near you this holiday season?