Wildlife abounds in the country, and in the mountains we have been seeing more visitors lately. It is a true quote I heard somewhere that if you put food out, someone will come along to eat it. I had some scraps left over from cutting vegetables, and thought the squirrels would like to have the asparagus ends and squash seeds. So I put those out, and sure enough, it wasn’t too long before a guest came for a meal. This was after I had set out the apple cores and peels for the crows. 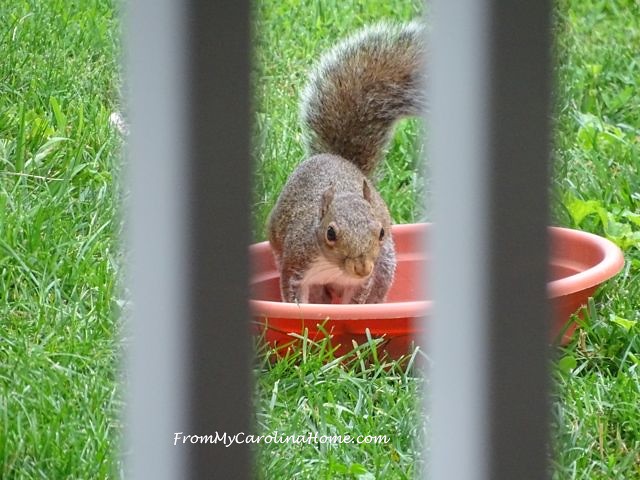 It took him quite a while to get up the courage to look over the edge of the pan and then hop in to take a bite, but he made short work of the squash when he finally did jump in. 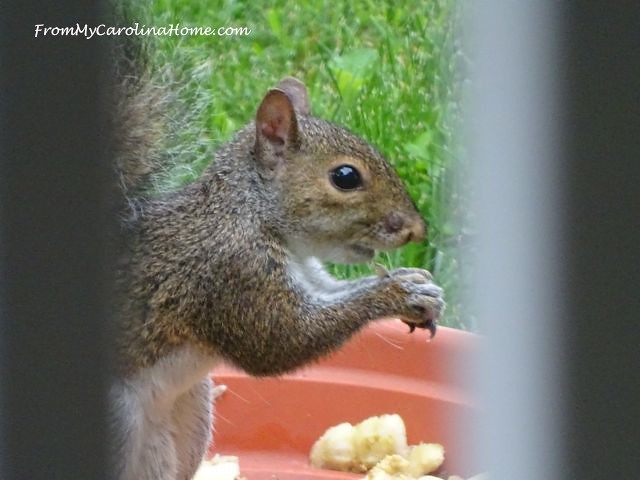 This little young woodchuck (or groundhog as some call them) was digging in the meadow one morning last week.   I’m not sure what he found, but he seemed happy enough to frolic in the meadow for a bit.  It was so hard to get a clear picture as the lens was zoomed at far as it could go.  I must have taken a dozen pictures, and this was the only one that came close to being clear. 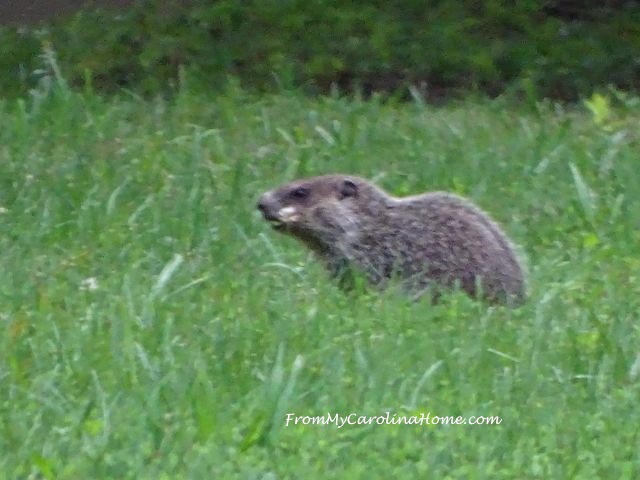 This raccoon came to visit a couple of times right at dusk.  He took advantage of the asparagus stalks left by the squirrels that I had neglected to pick up.  After I saw him the second time, I made sure to take the pan away.  The last thing I need is a raccoon tearing up the shingles, which I know they sometimes will do.  He can stay in the forest and we’ll get along fine. 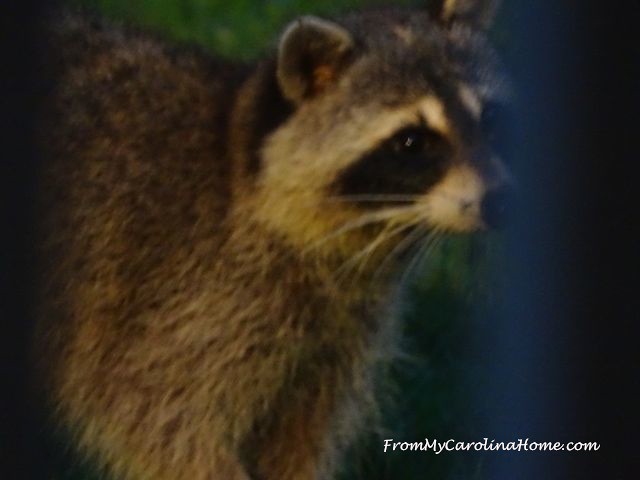 This little guy came by for a bite of seed. He looks a bit moth-eaten, but in fact those dark spots are his juvenile brown feathers that he hasn’t shed yet. 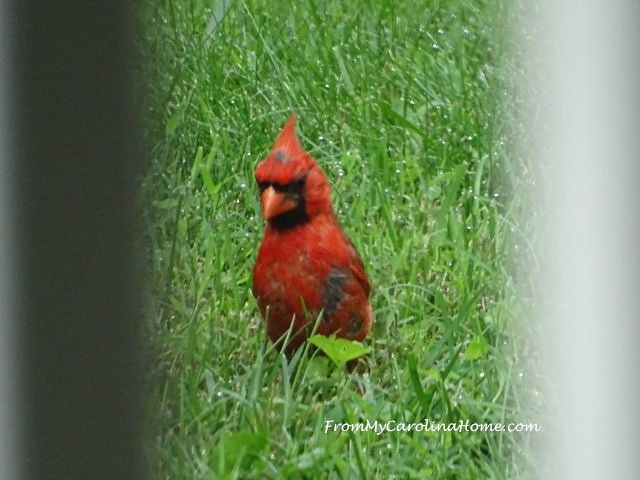 He is still learning how to grab onto the feeder. He fell off and flew away a couple of times before getting the balance to stay on while he ate. 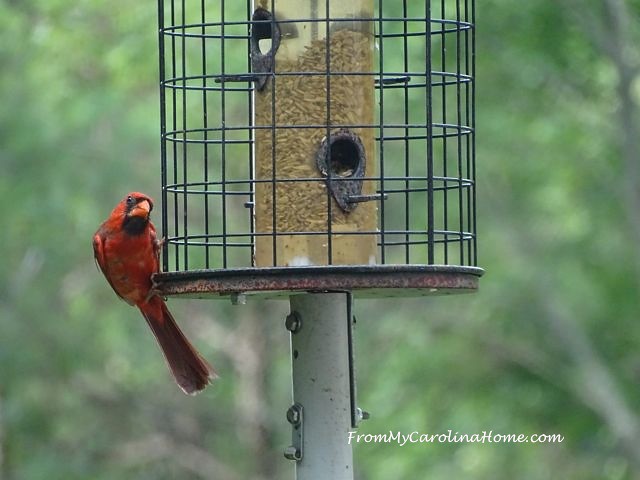 It is always a surprise to look out the window and see a fox.  Usually by the time I grab the camera and get it turned on, then get it focused, the fox is gone.  But this evening, the sun was low in the sky, and only a patch of sunlight was available at the edge of the meadow, where the fox was sitting and scratching himself. 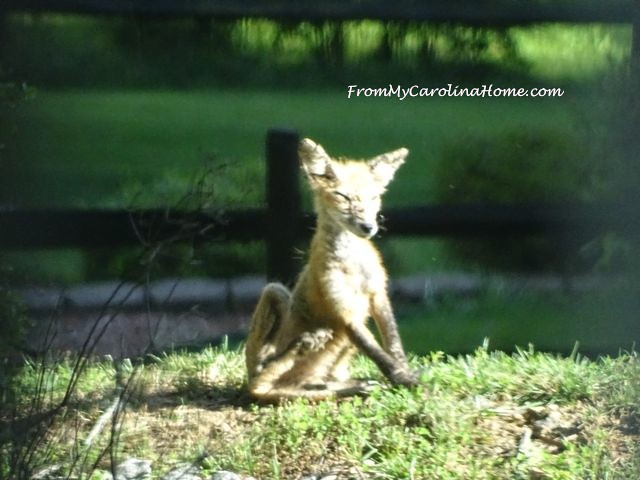 He must have a lot of fleas, as he was scratching and scratching. 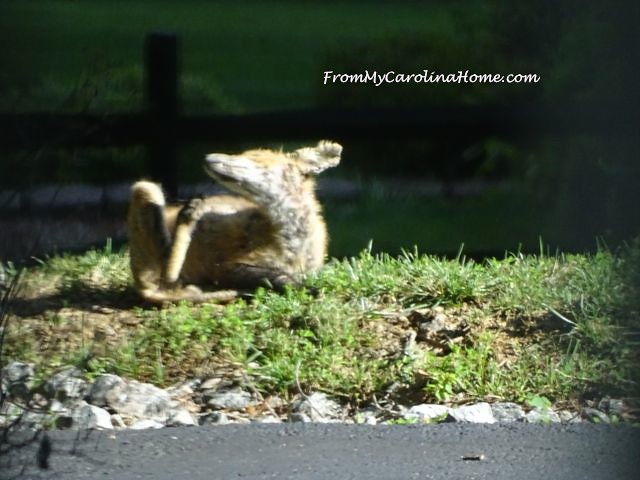 I was amused at how long he stayed in that one spot. 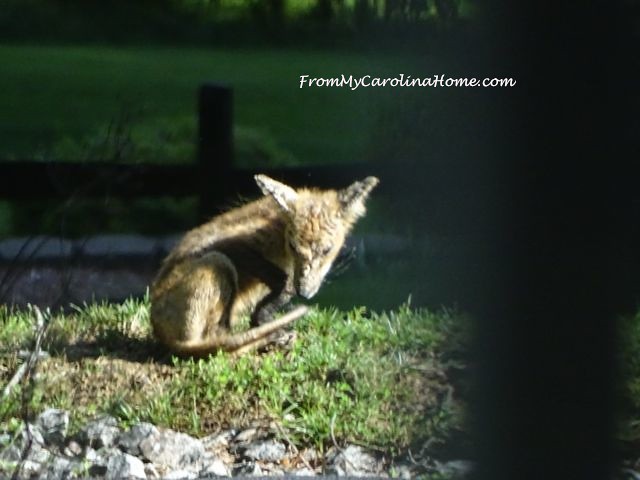 He started sniffing around for a minute, and I wondered what he was up to. 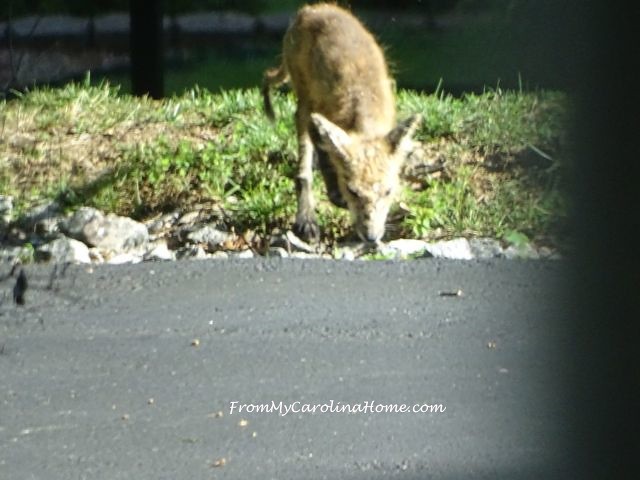 Then, he wallowed on the stones in the drainage area that collects rainwater off the mountain and directs it to the drive and across to the stream at the bottom of the cove. Those stones are larger and probably made a good scratching pad. 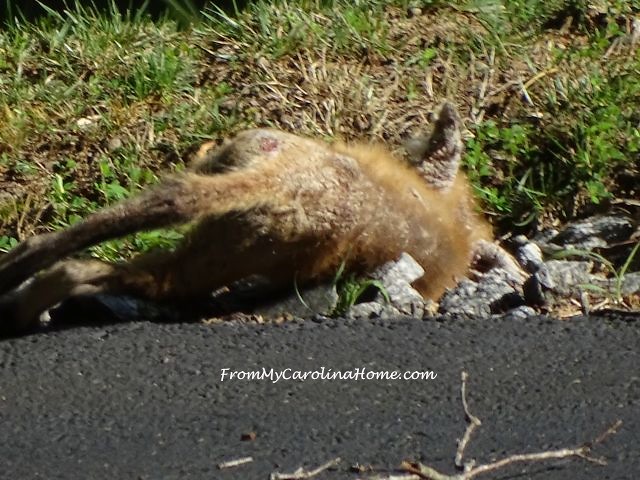 He sat down for just a moment, then headed off down the road. Fun to see him stay for a bit, as he usually is just a flash as he lopes across the meadow.  He is so skinny!  But at least we don’t have any mice in the house. 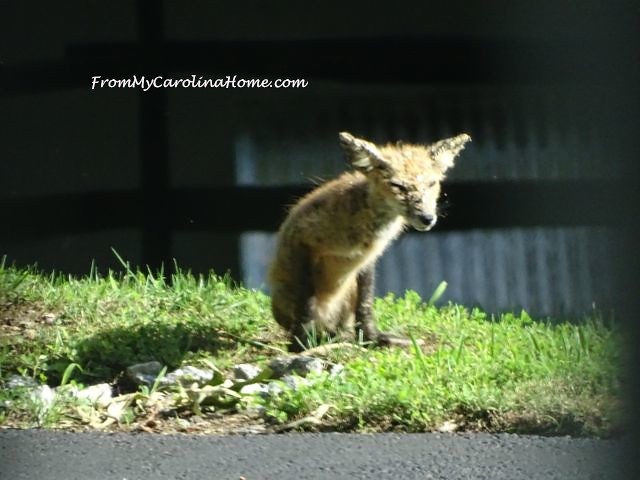 On Thursday, a single solitary wild turkey was grazing in the meadow. It looks like a young one, cannot tell if it is a male or a female as it hasn’t developed any of the normal characteristics of a mature turkey yet. 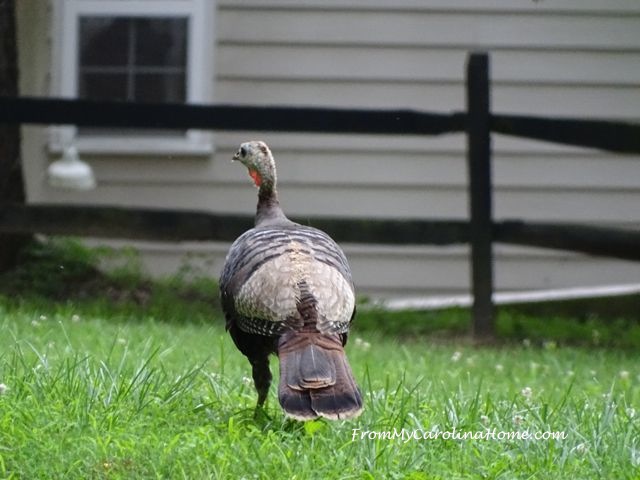 But, just for fun, I called to it. It looked at me, but didn’t come toward me. It also didn’t run away. It just went back to looking for acorns and worms, and ambled off at a leisurely pace. 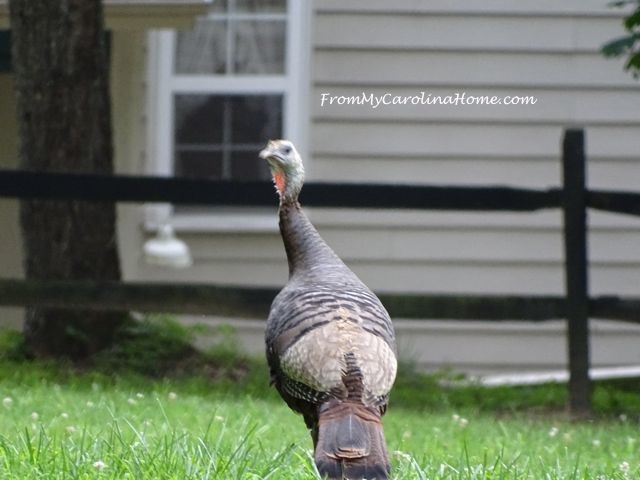 On the feeder, I managed to catch the wood thrush, the spotted breasted bird on the left.  He has been regaling us with birdsong for quite some years, and this is the first time I have managed to photograph one.  The female cardinal on the right has come by every evening now for a week or so.  I have seen the male courting her again, feeding her seeds from the feeder, a sweet sight. 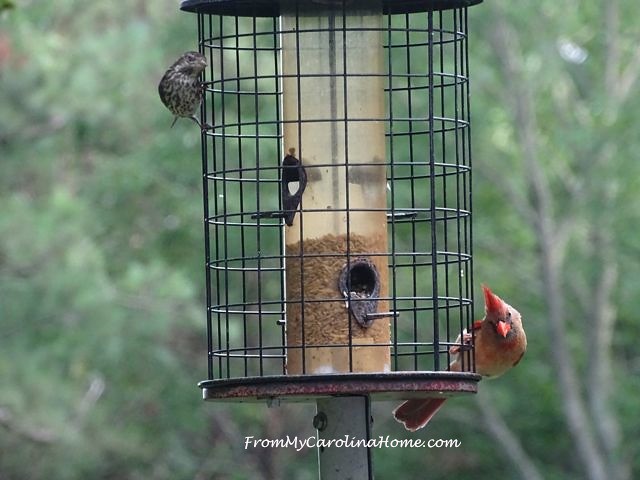 It is quite unusual to see a thrush at a feeder, I am told that they like to stay in the woods and feed on the ground in the forest floor underbrush.  This is the first time I’ve ever seen one at all, much less at our feeder. 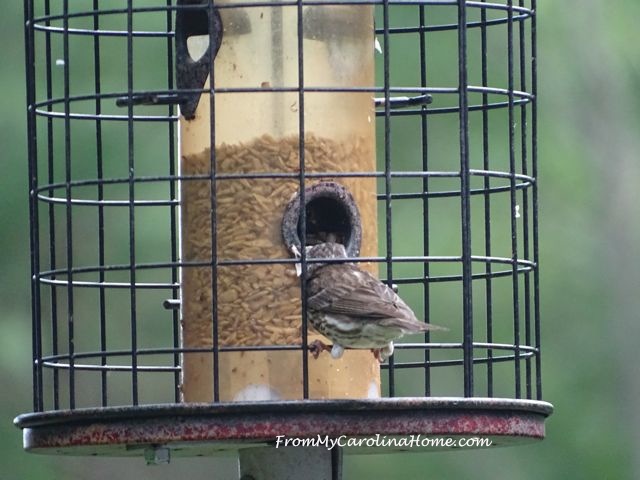 The story of identifying his song was interesting.  I had heard this bird for some years and never knew who was singing this particular song.  I looked on websites, and listened to snippets of bird songs for all the birds I knew were living here, but could not find this melodic birdsong.  I was able to record a video on my camera of just some trees with the bird song, and the video file came out at whopping 576MB!  DH showed me how to extract just the audio using a program on our computer, and export it to the desktop as an MP3 file, at a much more manageable 487kb.  I then sent the file to the wonderful people at the Ornithology Lab at Cornell University.  I got an email back the same day from a very nice guy named Matt, who identified the song for me as a Wood Thrush.   I’d love for you to hear it, but none of my normal outlets will upload an MP3 file – not Flickr, not Youtube, not the blog.  Oh well.  If I figure something out I’ll let you know.

What is the wildlife doing at your place?

24 thoughts on “Wildlife on the Mountain”