Supernatural occurrences are abundant in these books with a sewing theme, and I’ve linked the Amazon listings to make them easy to find. My favorite of all the writers of ghostly themes is Barbara Michaels. In fact, it was the book Stitches in Time that hooked me on her writing many years ago. Who doesn’t love a good ghost story, especially with Halloween coming up?   The first book in this Georgetown trilogy is Ammie Come Home, originally published in 1968, but you don’t need to read it to follow the story in the second two books.  The author is good about catching you up.  It introduces the house and the family, with Ruth and Patrick.  A  spirit takes over a vulnerable woman, trying to prevent history from repeating itself.  Another more malevolent spirit has other plans.  Shattered Silk is the second book and introduces us to Ruth’s niece Karen and her friend Cheryl, who come together to open a vintage clothing store.   There no ghosts in this story, refreshing in that it isn’t a murder mystery, but I was expecting some supernatural element – it is Barbara Michaels after all! But, the mystery is engaging, difficult to put down, and there are some twists that you won’t see coming. It is fun to read a book written before the internet or cell phones (1986), which would have changed the story in some ways, as characters would not be out of touch – unless there was the story device of a dead battery or out of tower range.  These are the second and third books in the Georgetown trilogy. 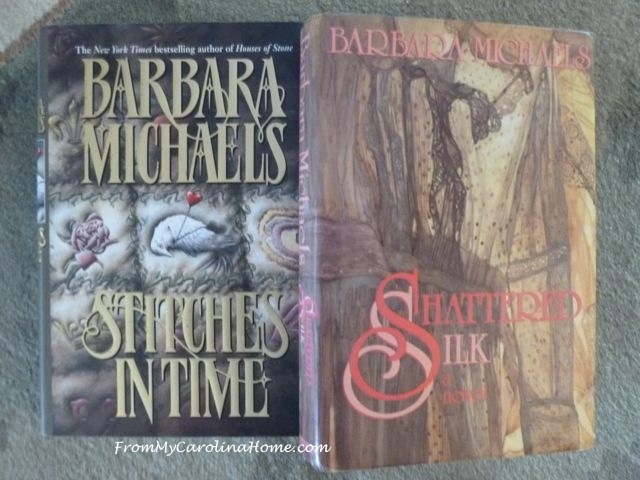 Stitches in Time picks up 10 years later, with both ladies married and dealing with a thriving vintage business.  Karen has changed her name to Kara, to exorcise the memory of her ex-husband.  When a stolen quilt is left at their door, strange things begin to happen to their part time worker Rachael, eerily like something that happened before.  Patrick remembers some of the ghostly incidents (from the first book), and tries to unwind the mystery, but the curse on the quilt isn’t easily set to rest.  The descriptions of the vintage quilt are marvelous, as are descriptions of some of the vintage clothing.  There is a good deal of information on preserving and cleaning old garments and quilts in the book too. I highly recommend this series.

Annette Blair writes a cozy mystery series with magic in the clothes called the Vintage Magic Mystery series.  First up, A Veiled Deception as Maddie returns home to Mystick Falls, Connecticut to attend her sister’s wedding.  Things go awry when the ex-girlfriend of the groom winds up dead and the bride is the main suspect.  When Maddie begins having visions coming from the wedding dress, things get interesting.  In the second book, Larceny and Lace, Maddie is busy with her vintage clothing store, called Vintage Magic, in a building formerly the morgue.  Again, she gets visions from the clothing that helps point her to clues.  I liked both these books, there is a bit more romance in these than usual, but I can handle a little.  I have the next three yet to read. 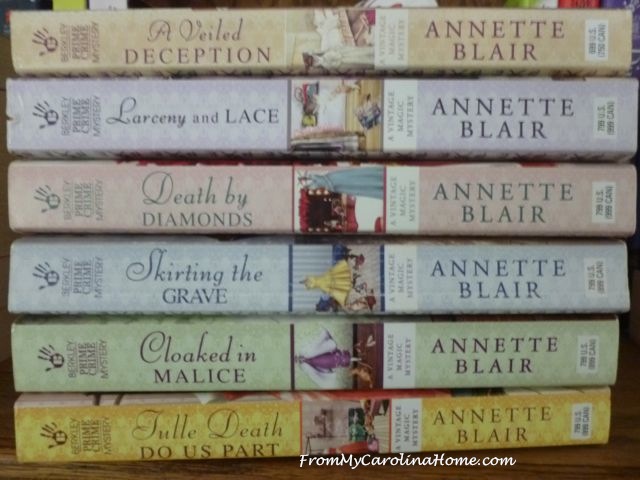 I have yet another magic series on Mount TBR, the Magical Dressmaking Series by Melissa Bourbon.  Harlow Cassidy, descendant of Butch Cassidy, moves back to her home town in Texas to escape the big city and open a custom dressmaking shop.  Apparently all the women in the family have special gifts, but Harlow believes that she doesn’t have any gifts.  Her mother can make things grow, her grandmother can talk to goats, and her great grandmother Meemaw always got what she wanted.  Meemaw has passed on, but apparently not left the house she left to Harlow in her will.  Ghostly occurrences and communication helps Harlow unravel the mystery, as she discovers that her gift is in the sewing of dresses and clothing to help the wearer feel better, or pretty, or more confident.  All the books have sewing tips in the back. I think I am missing book 2, but will likely just skip it and read the rest of what I already own. 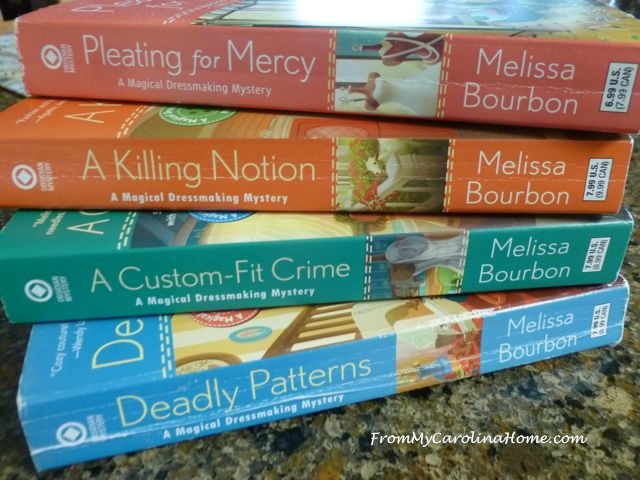 So many books, so little time!  What are you reading now?