Detritus – the pieces that are left after something breaks or falls apart, what is leftover as a remnant, worthless material to be disposed of.  Having more time on my hands than usual, I decided to tackle cleaning out a closet in the office.  This is something that has been sorely needed for literally years.  I stuff things in there and forget them, the detritus of past college classes, boxes of  papers from my mother’s estate, pictures on faded film going back more than 40 years, packing boxes that might come in handy if I ever put the stuff on the other two shelves on eBay, gifts bought for coworkers that will now not be given, at least not until I have coworkers again.  DH was home working on his computer on the day I decided to do the clean out.  I picked that day in order to at least have some conversation as I pulled stuff out and littered the floor.  So intent was I to get started, I didn’t take any pictures of the mess. 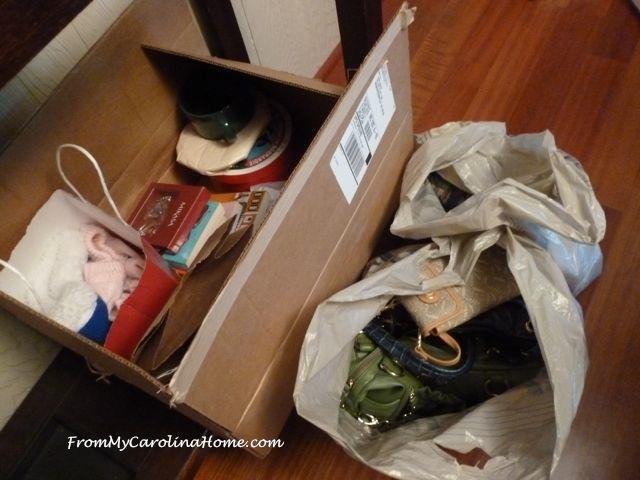 How many jigsaw puzzles does one person need? I remember doing one at every Christmas holiday, the family gathering at the in-laws or our home for several days of visiting, eating, watching football and old movies, enjoying the holiday time.  With 8 adults in one house for several days, a jigsaw puzzle was a way to get everyone involved in a come and go activity, something to do when one was just a bit bored.  We almost always got the entire puzzle done.  But the last time we had five adults in our NC home, and the puzzle was too difficult to finish.  It was of turkeys and pumpkins that I bought for a Thanksgiving gathering, and it had 1000 pieces.  I still have it, maybe I’ll try again, but my sense is that I will again get discouraged by its difficulty. You would think that ‘larger pieces’ wouldn’t be so hard.  Puzzles are supposed to be fun, not stress producers, especially when there are houseguests.  I put two in the donation box. 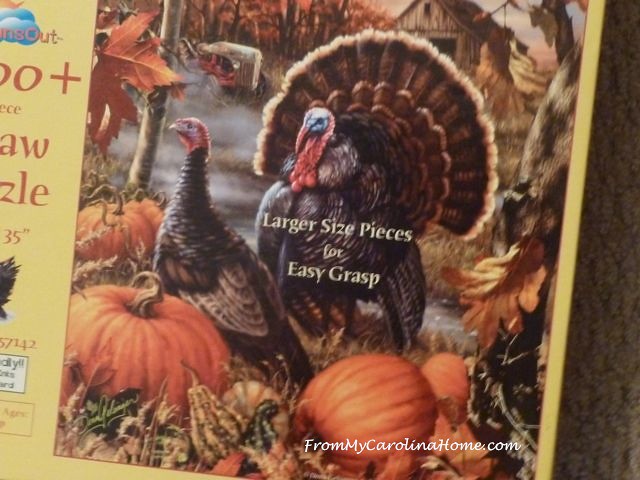 What about these backgammon games that no one ever plays anymore, yet we have stored for years?  I imagined playing on our veranda, reminiscent of a simpler time, when a cool evening can be passed with a simple game and a large glass of iced tea.  At this point, I would have to look up the rules to remember how to play.  OK, the smaller one can be donated, keep the larger.  Maybe put it where I’ll think about it when the weather finally cools off instead of hiding in the closet again. 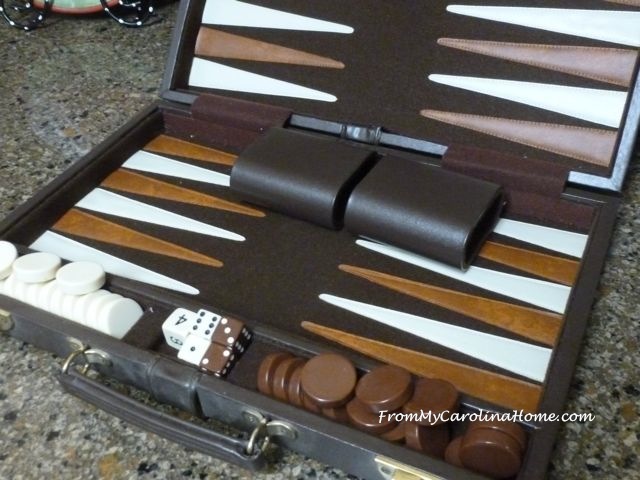 I pull out a photograph of a sales meeting from 1986 or 87, or was it 88, with at least a hundred people all wearing the same polo shirt we got when we arrived.  I remember the meeting place, a lovely hotel in Scottsdale Arizona.  I remember the closer friends I had when I worked there.  When the picture was taken, I could tell you the name of everyone in the photo, now I could barely name a half dozen.  Why am I keeping this?  I don’t know.  I handed it to DH and said, look at this.  Then I asked him, what should I do with it?  I certainly don’t want to frame it and hang it on a wall.  I don’t see keeping it at all.  Should I put it back in the closet in its keeper cardboard folder?  Then what?  Let someone else shred it after I am gone? DH wordlessly held the picture over the shredder.  I nodded.  One piece of paper down, hundreds to go.

Then, I tackled the shelf with my research for my Master’s thesis. I had kept every article photocopied for the basic reference support, drafts and diagrams, all my personal notes, and illustrations I made to advance a new theory. It filled one shelf and spilled over to another. I had successfully defended the thesis in oral argument in 2002, and was told by the three-professor committee that I should consider publishing it. Now, years later, all the research is hopelessly out of date, and I will finally admit that I will never publish this.  I would need to start over on the whole concept and research – not something I want to do at this point in my life. The next shelf held magazines and illustrations I was keeping in case I ever taught a class, along with interesting photos of microscopic tissue and bacteria studies – things from before the internet. I started a box to go to the paper recycler. Then I filled a second box fairly quickly. Ever notice that once you start throwing things away, it gets easier to do more?   Some things are current and records I have to keep. When I was done, all of that was down to half of one shelf. 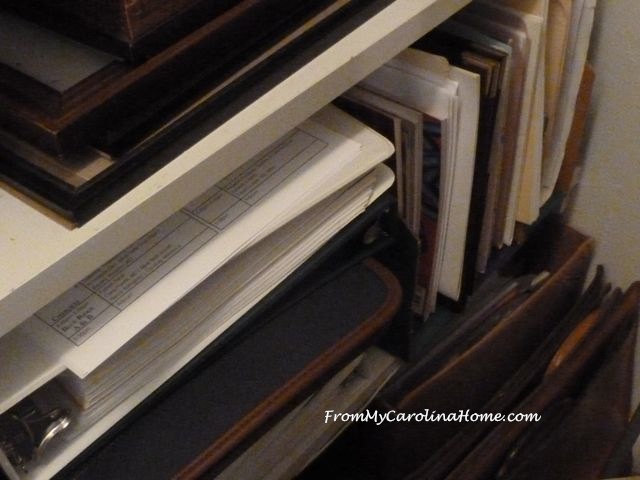 I remembered going through the same kinds of things at my mother’s home after she was gone. It took an entire day just to go through her cedar chest stuffed with unlabeled photographs of people no one in the family knew, letters and papers that meant nothing to me, along with every card I ever sent her, letters I wrote from camp, report cards and graded papers from years of school, pictures of me in dance costume, and a few things I’d rather forget. I wondered, is this the detritus of her life or mine? Maybe both.  Having found mementos of my childhood, should I keep them, and then what?  Keep them in the box somewhere for someone else to throw away years from now?  Maybe I’ll go through it more carefully another time.  For now, it isn’t taking up much room. 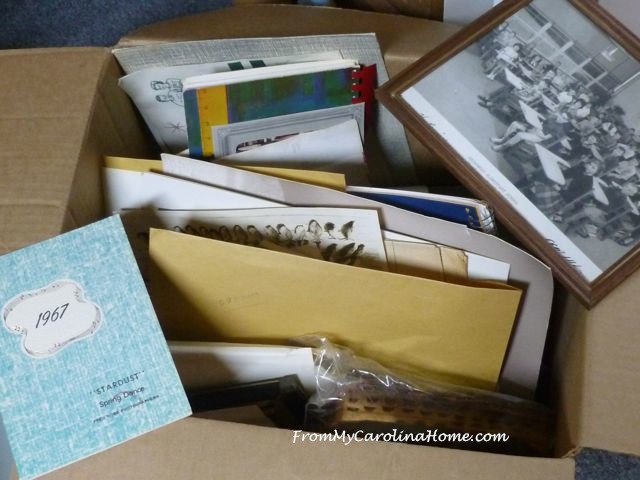 OK, so this can be donated, and so can that.  Boxes were brought in, filled up and set near the door to be taken to one of the many thrift stores in the area.  Progress was being made slowly, as looking at all those papers was time consuming. My mother had kept a newspaper page from 1964, and I have no idea why. Maybe she was interested in this house plan as she got her real estate license around that time. Do I need this now?  No, I don’t. But it is over 50 years old, and there is a school lunch menu on the other side. It went back into the box with my childhood stuff. 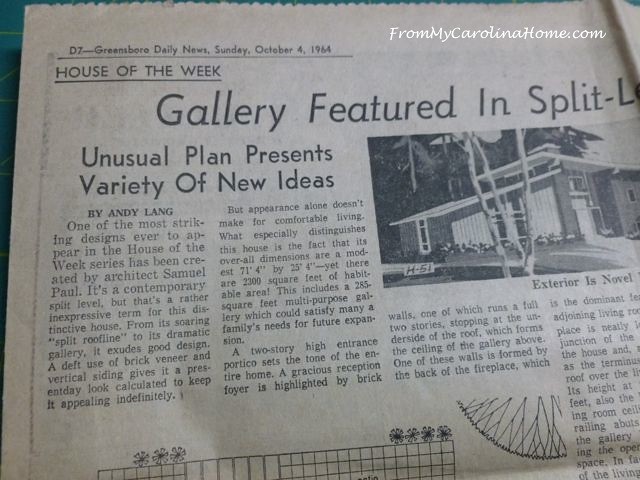 Our wedding album, almost 40 years old, falling apart with faded pictures, and still brings back wonderful memories.  This of course is a keeper for me, as is my bridal album.  Someone else can throw those away after I am gone.  What is special to me now, will become detritus to someone else later. Another shelf holds several photograph albums along with shoe boxes full of photographs, remnants of days enjoyed at air shows, car shows, and vacations, holidays and special days.  Do I remember all those days?  Some, but not all.  But when I was asked for a photo of a memory for my cousin, I managed to come up with one of her holding up a calendar, so we knew it was from Christmas 1979.  Her daughter was still a toddler.  Looking at some of those photos brings back fond memories of those days.  But this was the first time in years that I have even thought about looking at them. 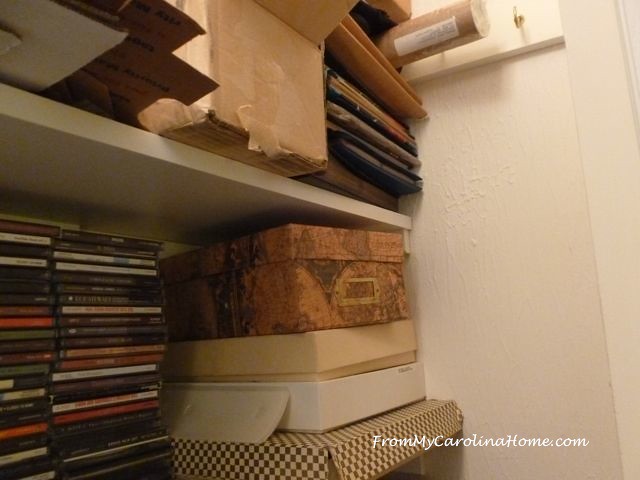 At day’s end, six boxes and two bags cleared from the closet – two to the paper recycle, and rest to donate.  Shelves are cleaned and reorganized.  CDs sorted, organized by genre, and some pulled for donation. 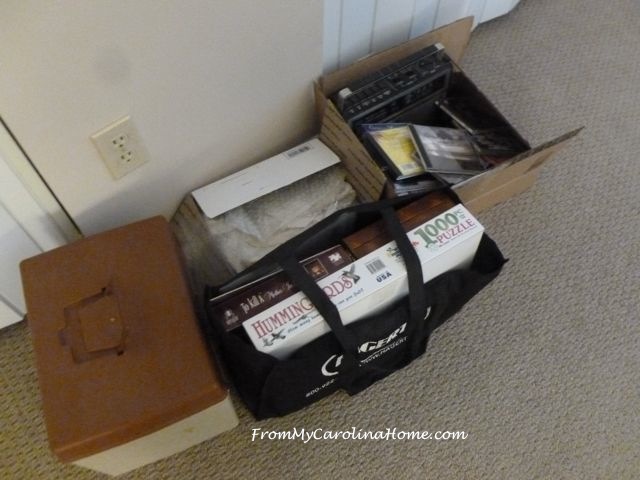 On another day I’ll see about all those photographs, maybe scanning the ones that seem important, and tossing some.  How about you, do you keep papers and other things long after they have outlived their usefulness? Do you have papers from your childhood still?  When was the last time you looked at your old photographs?

27 thoughts on “Clearing Out”