February usually brings the color red to most minds including mine.  Most years I miss Mardi Gras because it comes earlier than I expect.  Not this year! Mardi Gras is February 9, 2016 (Feb 28th 2017), and I am ready.  I also did some research, and found out that the Mardi Gras season is not just one day, but several weeks of carnival beginning on Twelfth Night, January 6th, and continuing to Shrove Tuesday, the day before Ash Wednesday.  If Easter is in April, this could last weeks! 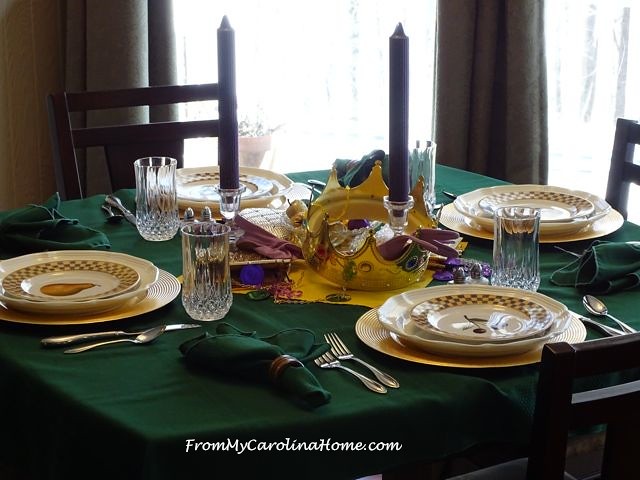 I also found that although most of us associate Mardi Gras with New Orleans, the oldest Mardi Gras celebration and the longest running annual celebrations are in Mobile, Alabama.  I figure that even though I don’t observe Lent, it is still a great reason to have a pretty table and a nice meal. 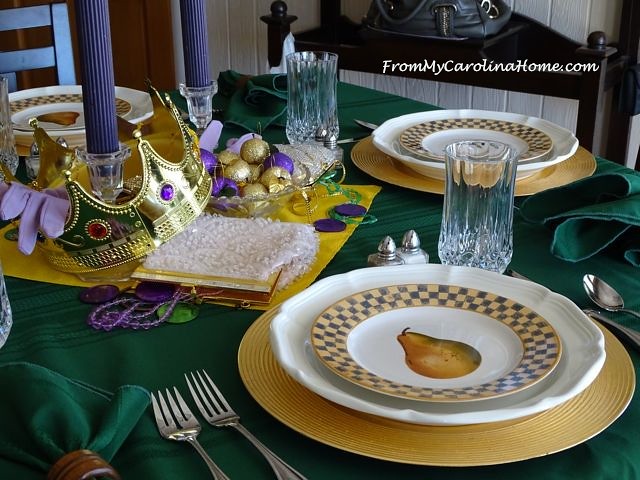 So, out comes a green tablecloth, my gold chargers, and a few other items to create a Mardi Gras table. 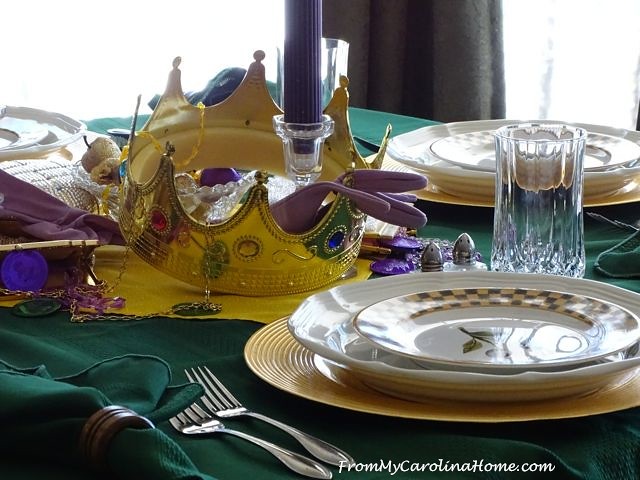 The salad plates with the pears are perfect, a thrift store find from our Wilmington trip last summer. 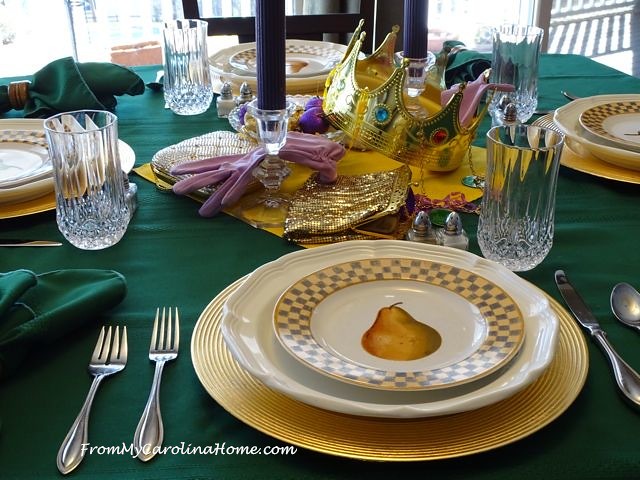 Unfortunately, I only have three, so I used two of them and two cherry motif plates. Both fruit plates have the same checkerboard rims as they are part of the same set. 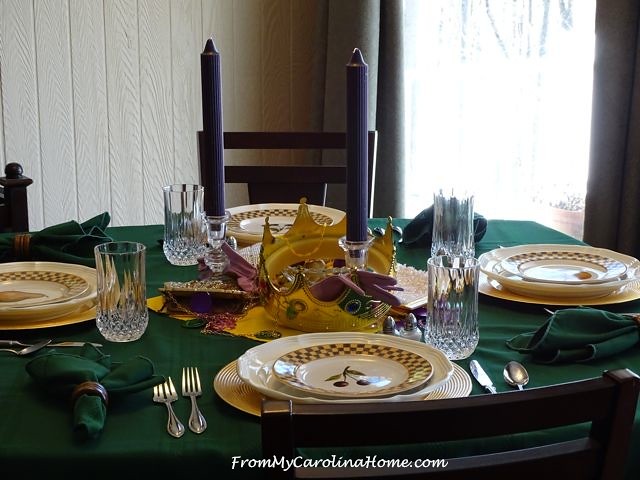 The centerpiece has a gold crown that I got a couple of years ago. I have some plastic coins in green and purple that actually came from New Orleans, along with the bead necklaces. 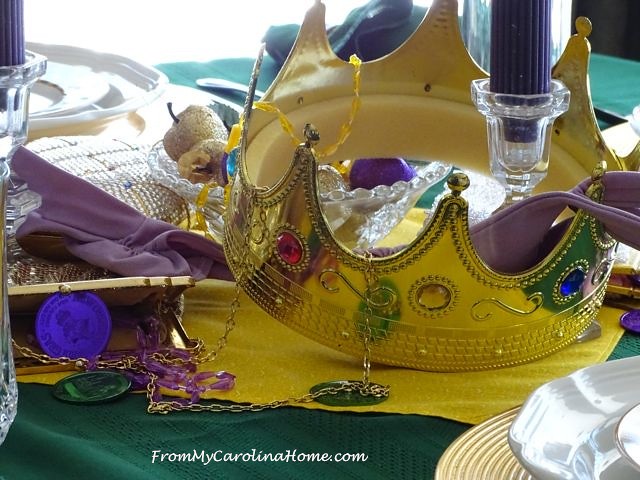 I rummaged through my vintage evening bag collection for three that were mainly gold or white. Then, I placed the coins and the beads as though they were spilling out of the purses. This one is all beaded with a gold clasp and chain. 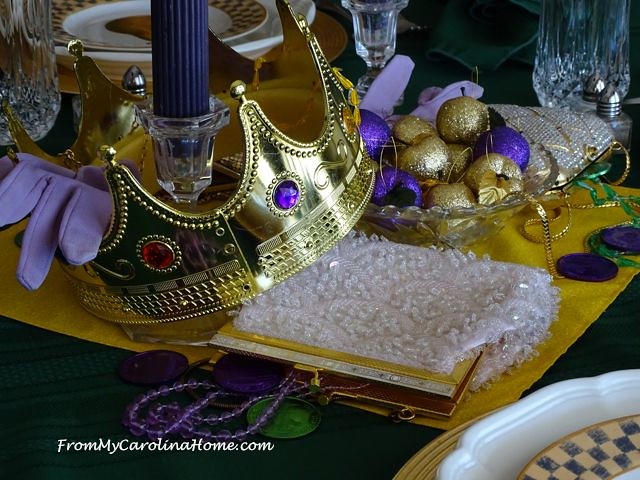 This one is all shiny gold. I wedged a purple coin in it vertically to hold it open. 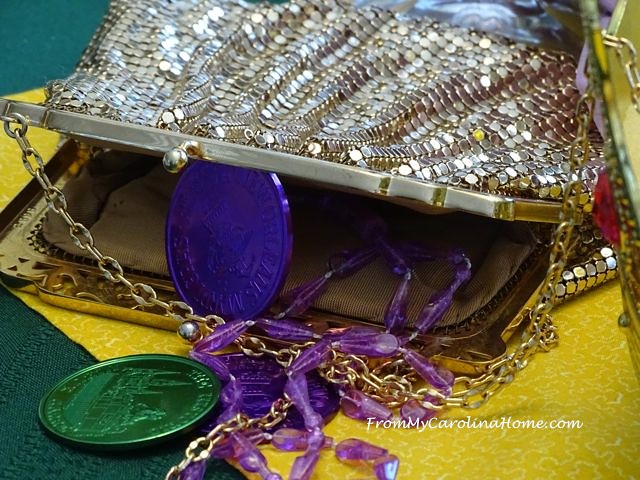 The third one is gold with rhinestones, and has the diamond motif popular for Mardi Gras. 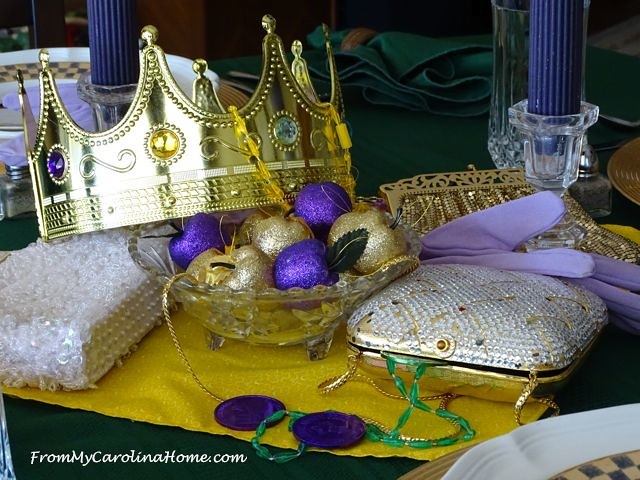 In a glass bowl, I put some glittery apples in gold and purple. I propped the crown on it for an interesting angle. 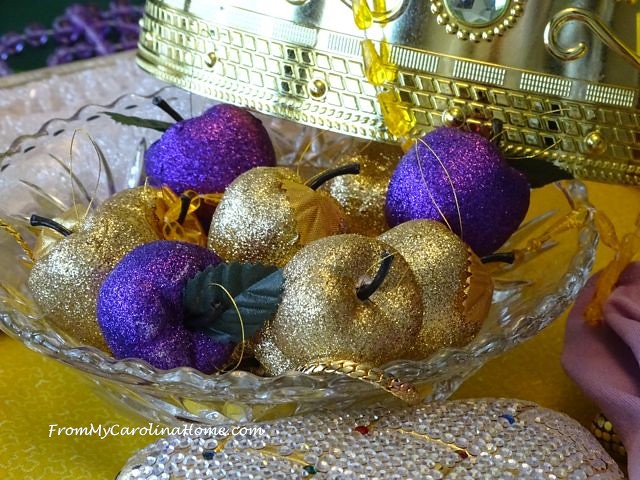 I also have a pair of 1950s vintage purple gloves. I thought they went well too, like part of a costume. One went on the side on a candlestick with a purple candle. 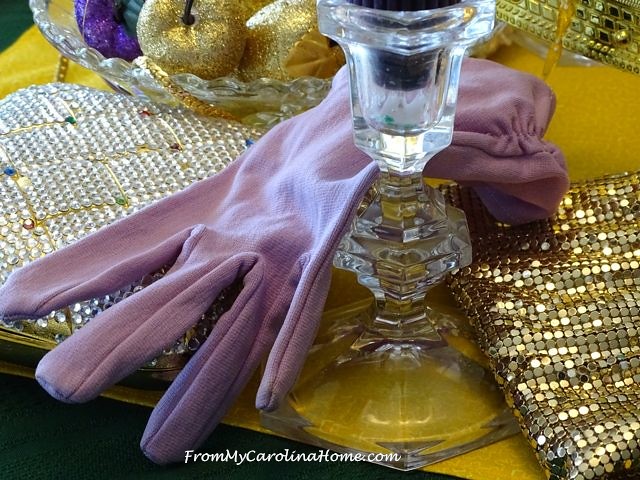 The other is draped over the gold crown. 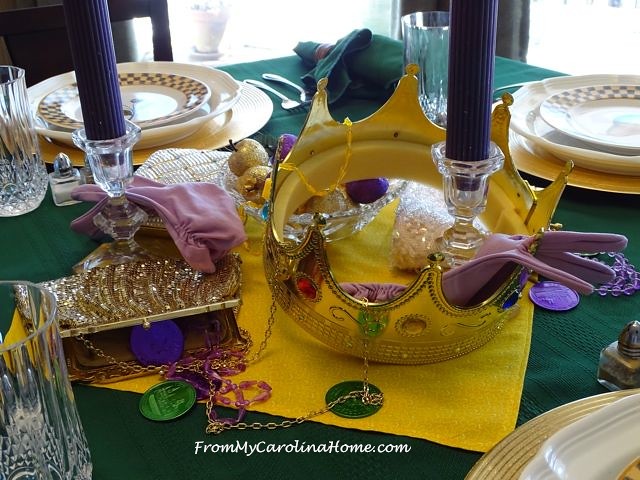 The only difficulty I have is with the food.  Traditionally, French Cajun food is served, but I do not do celery (for reasons I won’t get into here).  So, I am going with two seafood dishes that are appropriate for a Gulf coast celebration.  First will be a Shrimp and Avocado Remoulade (scroll down past the tablescape on the link) followed by my Pan Seared Tilapia with Spinach.  Both recipes I have posted about in the past, just click on the links to see them. 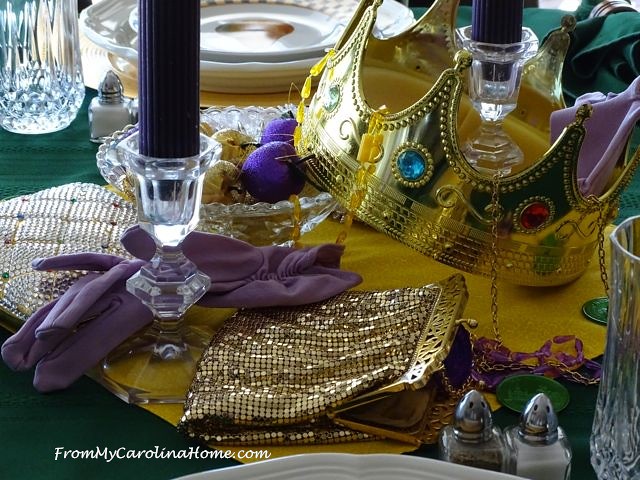 Are you doing anything special for Mardi Gras?