A short drive from our home is the 260+ acres of the Carl Sandburg estate called Connemara, in Flat Rock.  He purchased the home in 1945, and continued to write and publish here until his death in 1967, producing almost a third of his life’s work in that time.  His wife raised goats, and they still are raised on the property today.  After his death, his wife sold the property to the government to be turned into a national park.  She also donated all the furnishings and goats so the estate could continue as a historic working farm.  It was designated a national landmark in 1968, and opened to the public in 1974.  When you enter the estate, you walk down a paved path to the pavilion. 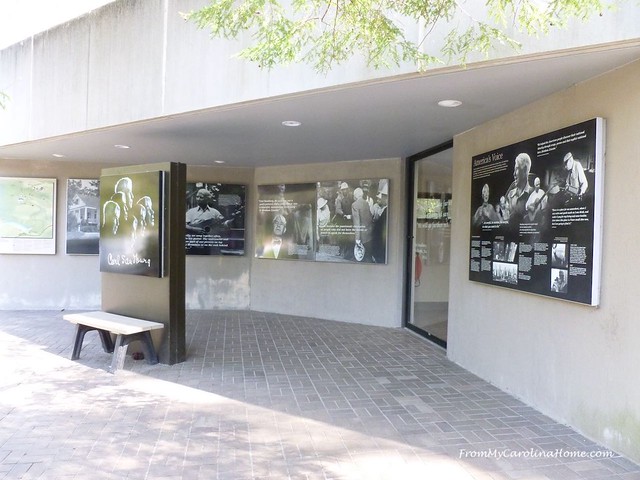 After reading about Sandburg on the pavilion, a paved path leads up to the house and outbuildings. 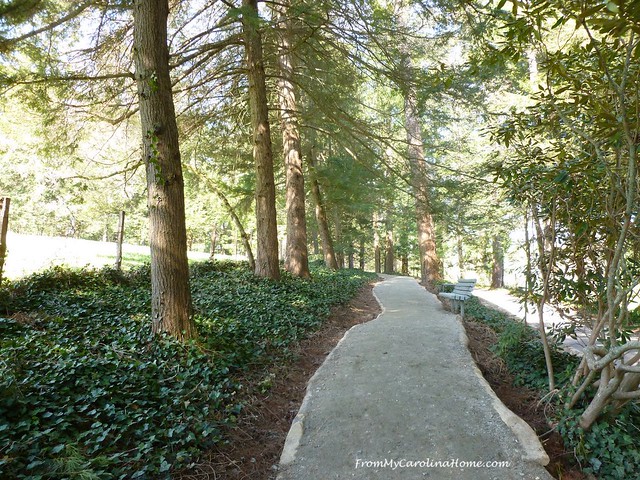 This little ‘tenement house’ was used at different times as a guest house, a studio for Carl’s daughter Helga Sandburg’s painting, and a residence for farm assistants. 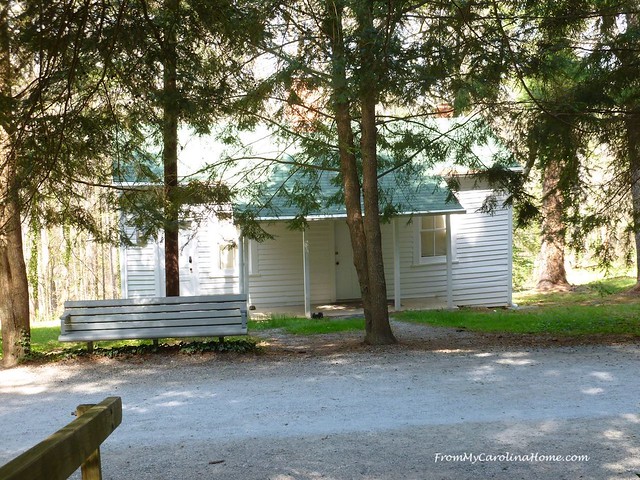 Lillian “Paula” Sandburg, Carl’s wife, was a breeder of champion goats, and continued that program at Connemara.  The large red barns were for the goats, with a smaller one for the baby goats, and a separate one for horses.  Today only goats live here. 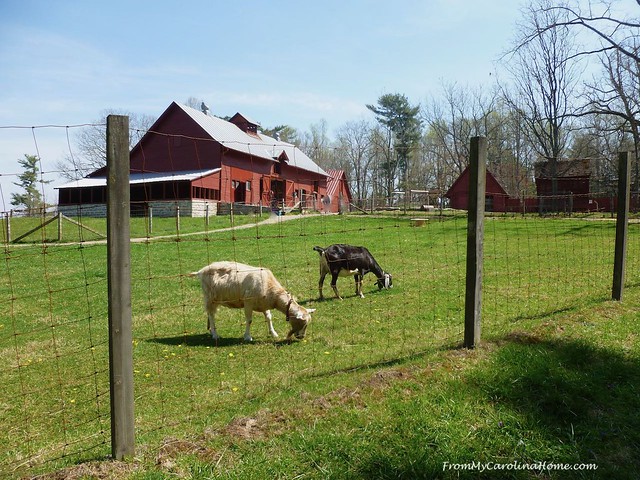 They have a fun program for kids of the human variety.  In March, they let children read books out loud to the goats.  The goats are reportedly a great audience, and the children get valuable reading practice.  That program was suspended this year. 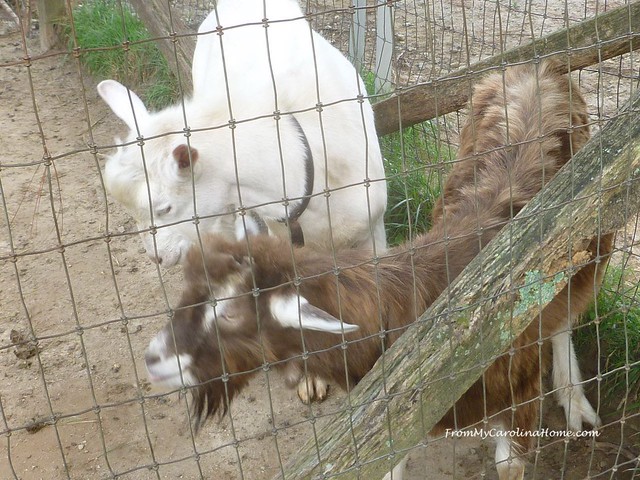 But the goats still have to be cared for.  They were out in two pastures on the day we were hiking. 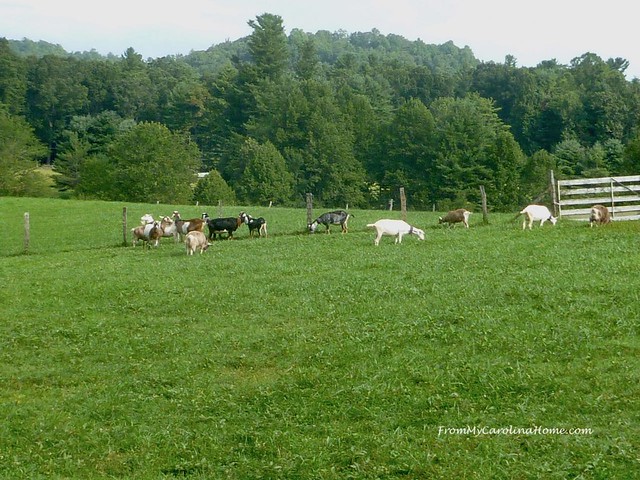 Not sure what was so interesting here, but this little goat was trying to reach the top of the pole. 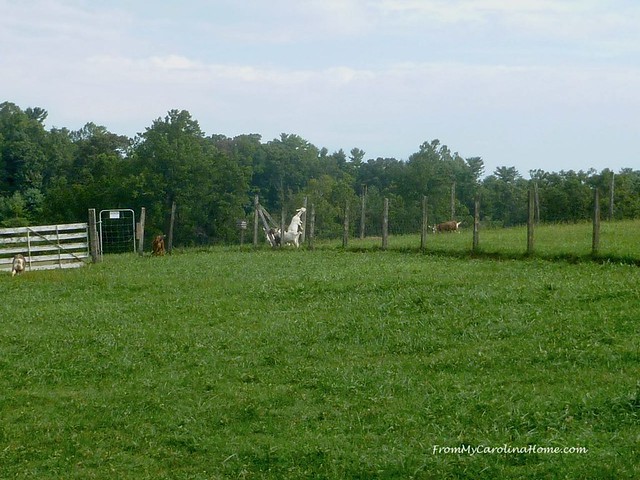 On the way back to the house, a full vegetable garden was yielding a wonderful harvest. 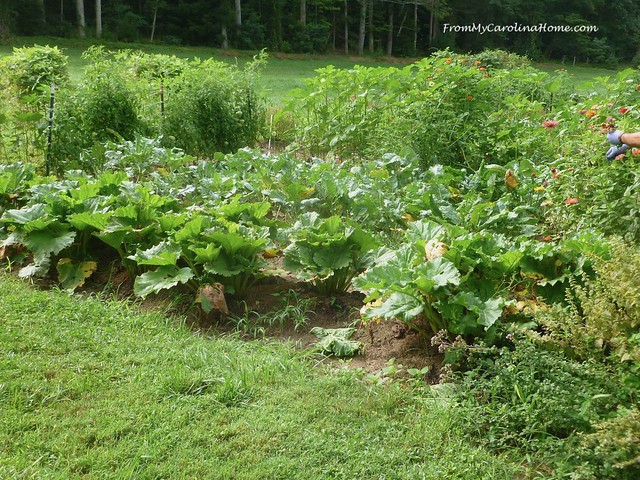 The edges of the gardens were planted with low shrubs full of colorful flowers. 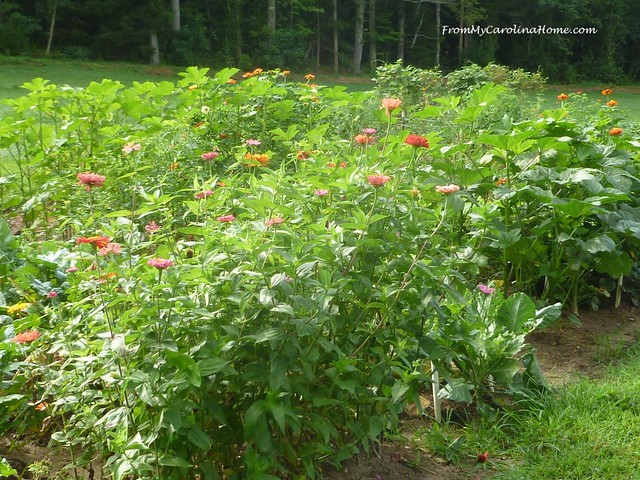 These are Mexican sunflowers. 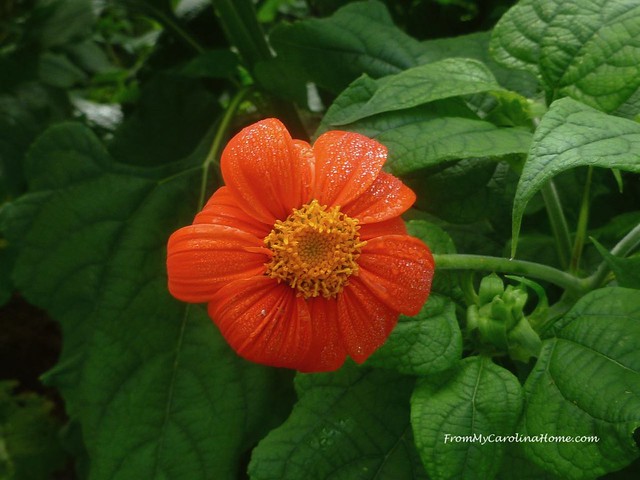 Small scenes like this along the road invite one to stop and observe.  An old gate stands open, inviting you to the other side.  It led to the lawn on back side of the house. 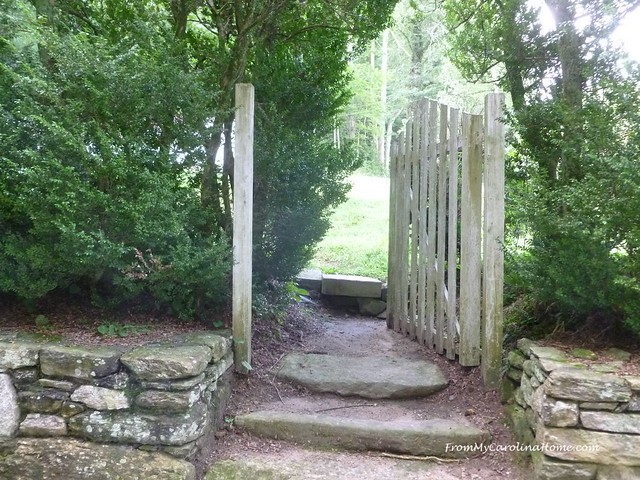 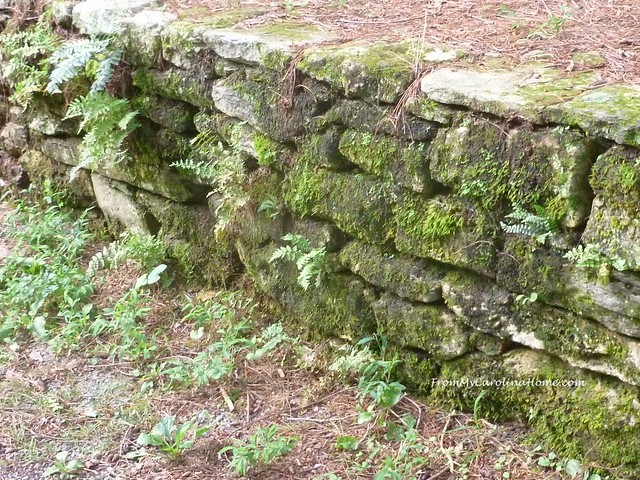 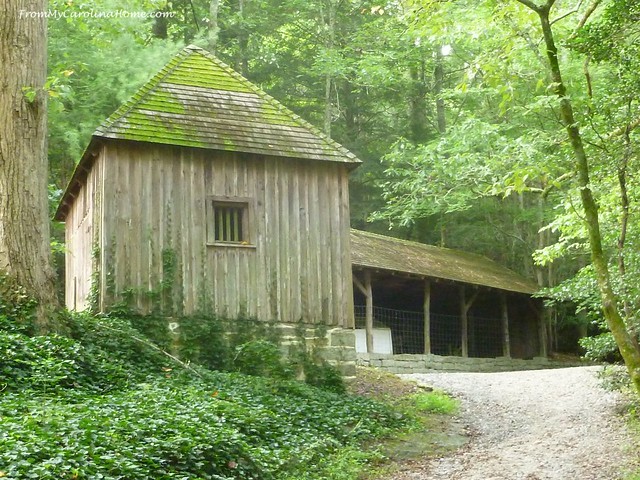 The property was first called Rock Hill when the house was built in the 1830’s by Christopher Memminger, a Charleston lawyer. Ellison Smyth purchased the property in 1900, doing some remodeling and re-named the property Connemara after the picturesque region in Ireland.  Sandburg liked the name, so he kept it when he bought the house and property in 1945.  Lillian’s dozens of ribbons for her champion goats are displayed inside the house.  The house is currently closed to visitors.  It was restored last year, and had just opened again with the furnishings back in place when it had to take a hiatus form visitors.  We toured the home while that was going on, and were looking forward to seeing it back together. 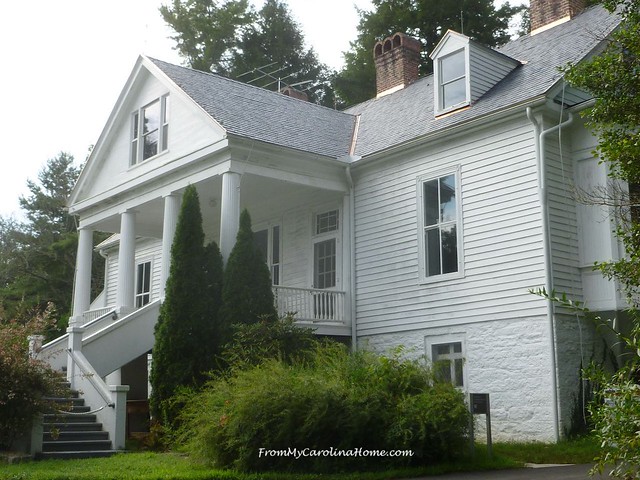 On of the neat things most visitors do not know, is that the foundation offers a writer-in-residence program.  For three weeks in April (except not this year) a writer is chosen to live in the house and work on their writing.  Sandburg’s chair sits on a rock bald near the home in a solitary place for use in reflection.  It is getting a bit shabby now, but you can still sit in it if you wish. 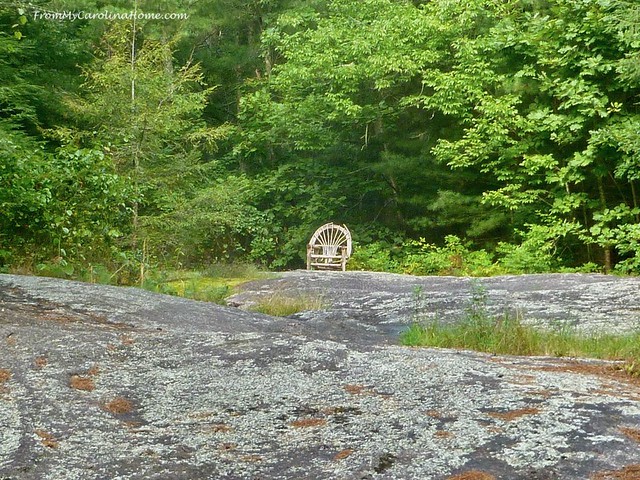 Leading away from the bald are five miles of trails leading up to the top of the mountain, around the forests and back down to the street level.   Most are well maintained dirt trails like this. 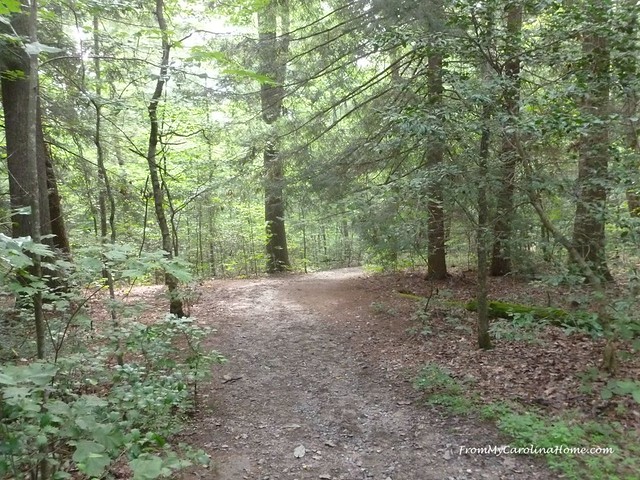 In some steeper areas, rough steps assist in going up or down. 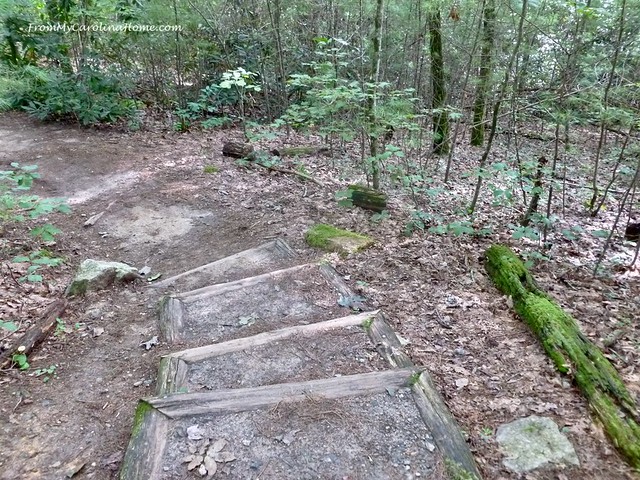 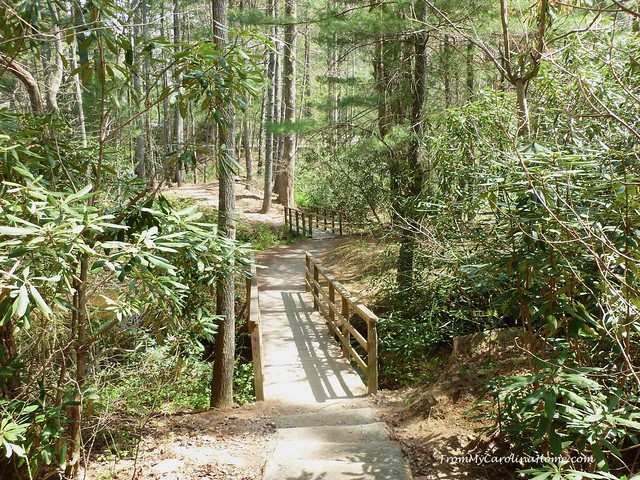 At the bottom of this trail, you can look across the lake to the bridge at the head of the park, just past the pavilion. 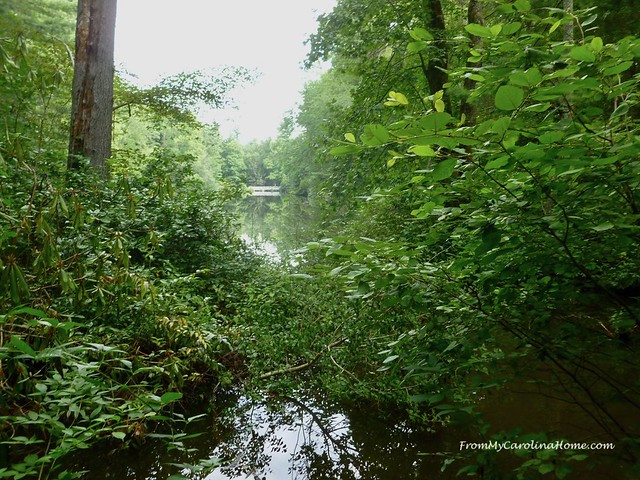 We’ve hiked this area many times, and have enjoyed it every time.  Getting outside in nature is such a restorative thing, a shinrinyoku (forest bath).

Are there historic estates or parks near you to visit?