Staying at home most of the time right now gives me a chance to make some headway on the backlog of quilt repairs.  This one was so typical of damage on tied quilts.  The ties just don’t hold the layers together well, and the top is often a different size than the back.  In this case, the backing is significantly larger than the top, yet in places the top has more fullness than the backing due to the ties not being consistently placed.  An added problem is the binding is ‘wrapped over’ from the backing fabric.  Honestly, the very best thing to do with this one would be to separate the layers, add the patches to cover the holes, and properly quilt it, but there were several problems with that. First, the fabrics are mostly knits and some heavy weight fabrics like corduroy and houndstooth that wouldn’t be easy to quilt.  Second, the customer’s budget wouldn’t allow that.  So, the only thing to do within his budget would be to machine stitch patches over the holes, and reattach the binding. 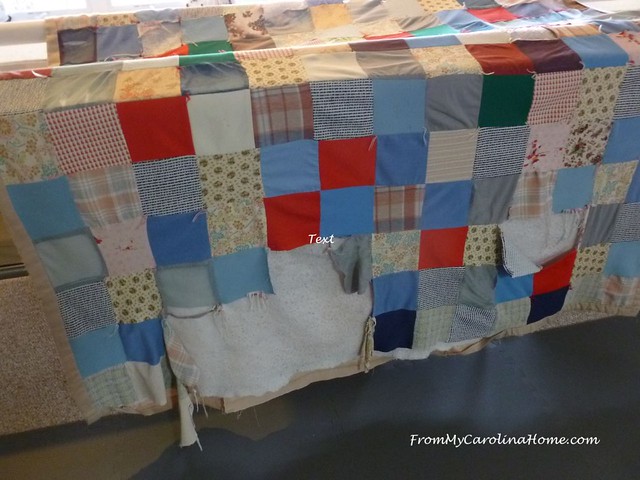 Luckily, he hadn’t washed the quilt with the holes, or this batting would be gone. 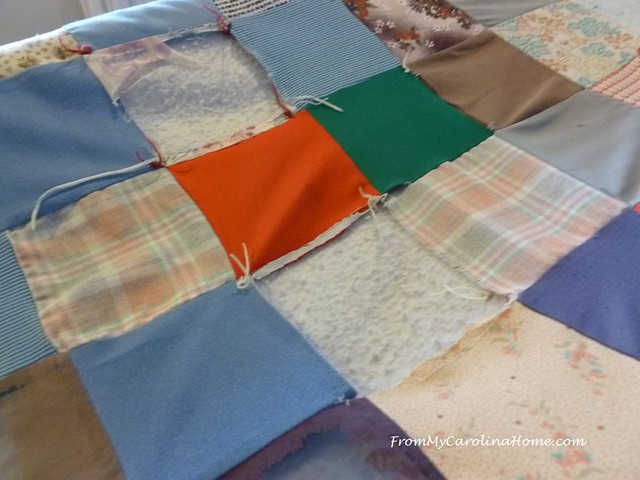 Some patches weren’t completely gone, just torn.  This one was a very thin knit fabric, like lingerie fabric, so thin you can see through it.  It was sewn to heavy weight upholstery grade tweeds on two sides, and shirting weight on the right. 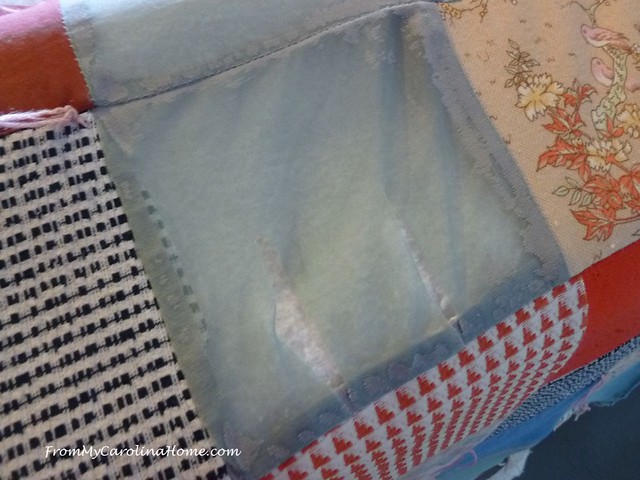 In spots, the owner had taken the strings left and tied them together. 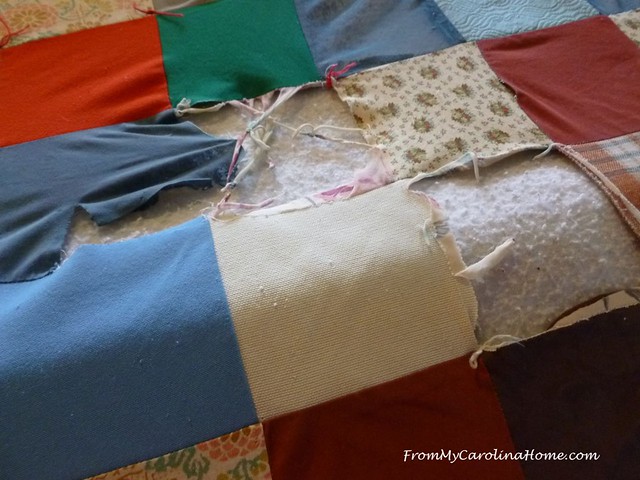 In other spots, the patches were OK, like this black and white one hanging.  The plaid one above it, though, was raveling. 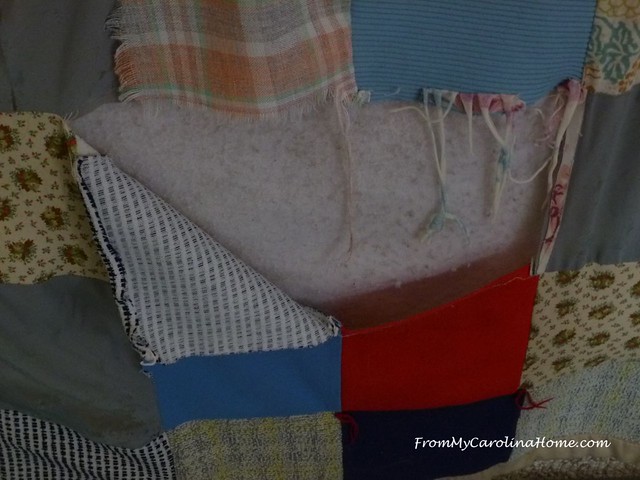 Laying the quilt out flat, you can see how much bigger the backing is side to side, while the top is larger top to bottom between the ties in this section.  This is going to create issues doing a machine repair.  I explained to the owner that the backing would end up with pleats where the patches would be stitched on top, but he didn’t care.  He just wanted to be able to have it on his bed as it was his father’s quilt. 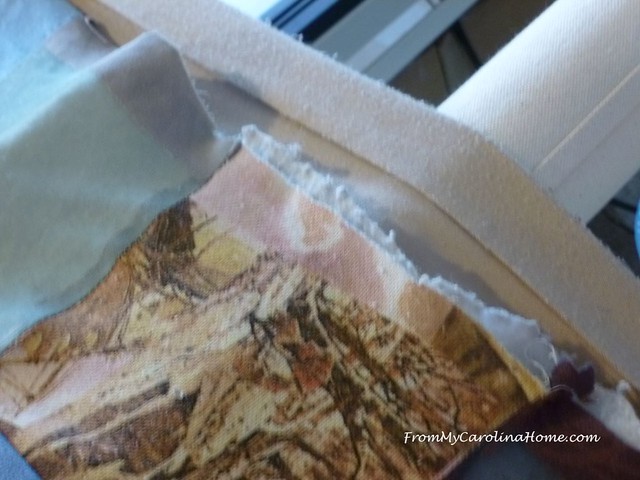 So, I began making patches for the holes, starting with the largest one. 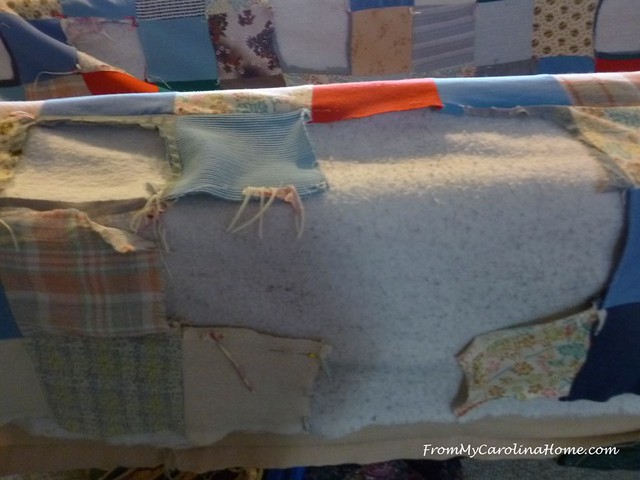 I sewed patches together before pinning them over the large hole.  The entire patch will be topstitched into place on the edges. 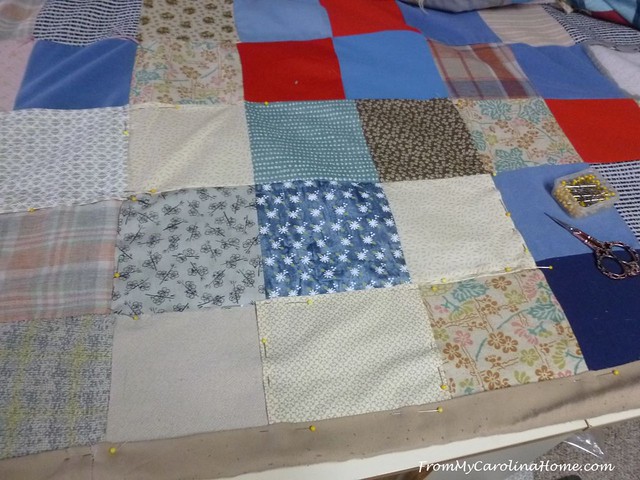 Then I began making patches for the smaller areas.  This one would need two sewn together. 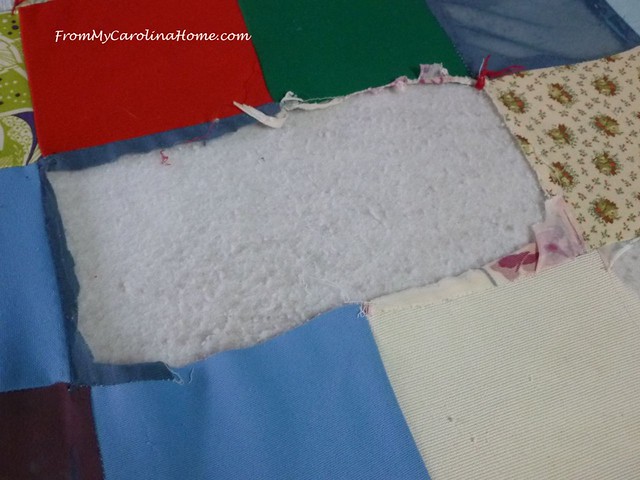 Here they are pinned in place. 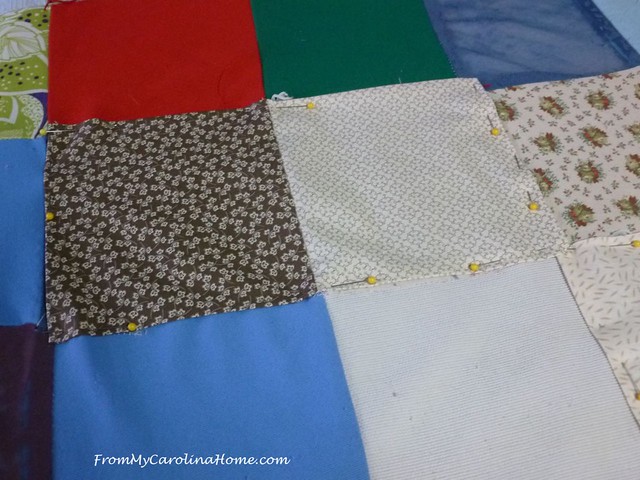 Patches for edge sections were made and pinned, then the binding was refolded over the raw edges. 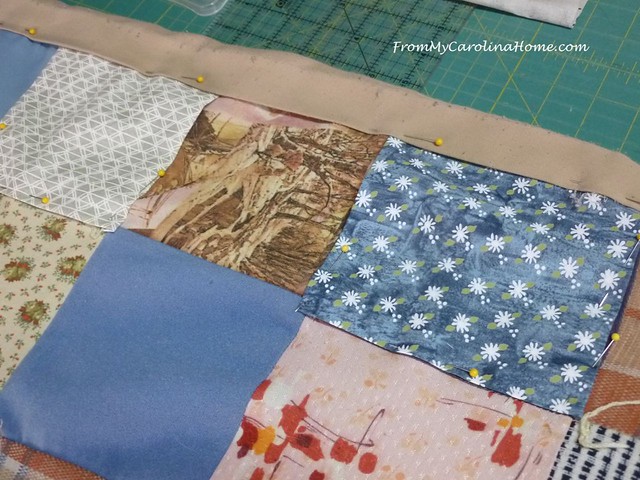 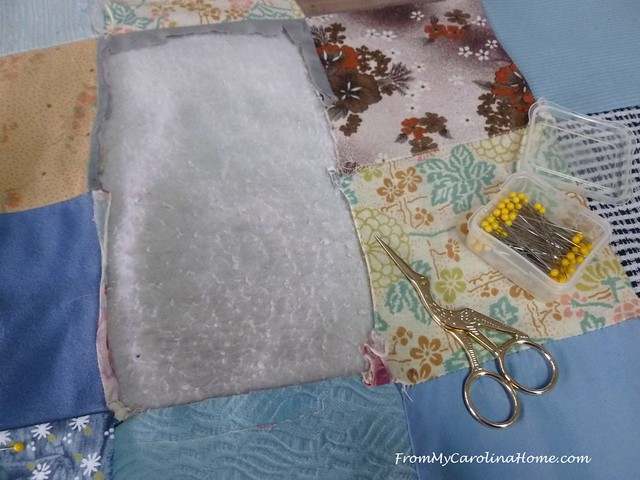 The prints I chose for this seem to blend well with the existing colors.. 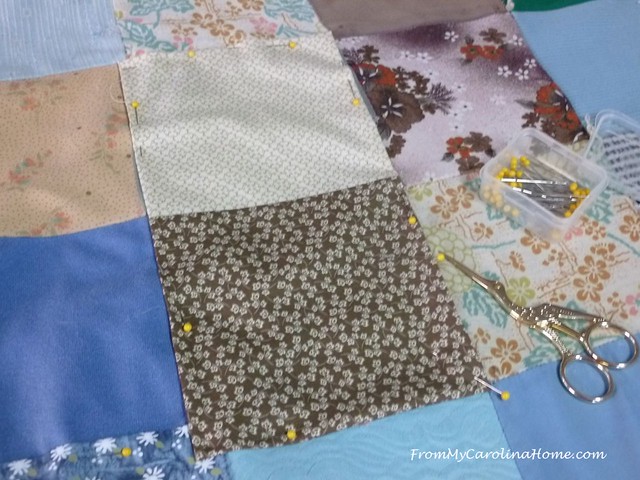 When I had all the patches made, I began with the edge, sewing those patches with my domestic machine then restitching the binding all the way around. 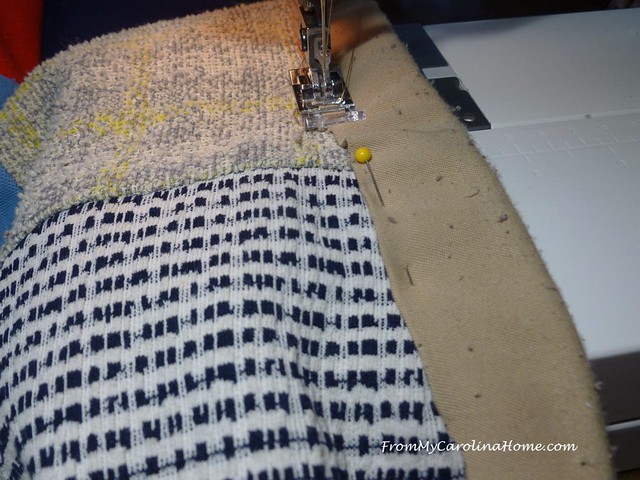 In places, that excess had to be worked in as best I could.  Finishing the edge first would allow it to be loaded on the longarm for the majority of the repair.  It was much too big and heavy to do the interior patches on the domestic. 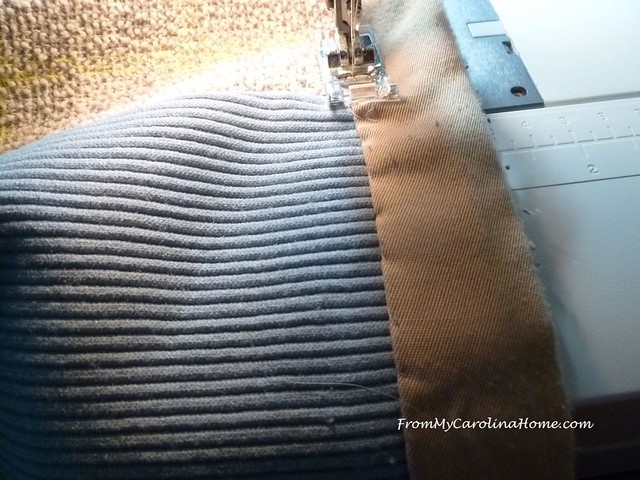 So, loading it was next.   Once again, the disparity in size of the patches created fullness all over.  I just flattened it out as best I could, working some of the fullness under the new patches as I went. 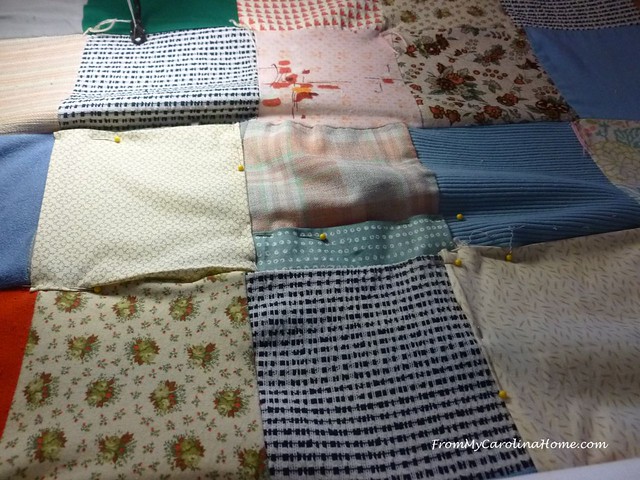 Unfortunately, the thickness made it difficult to sew a straight line in many spots.  Once again, I pointed this out to the customer, but he really didn’t mind.  I did give him a discount on the work, which he actually refused.  So we met in the middle, as I didn’t feel that this was my best work. 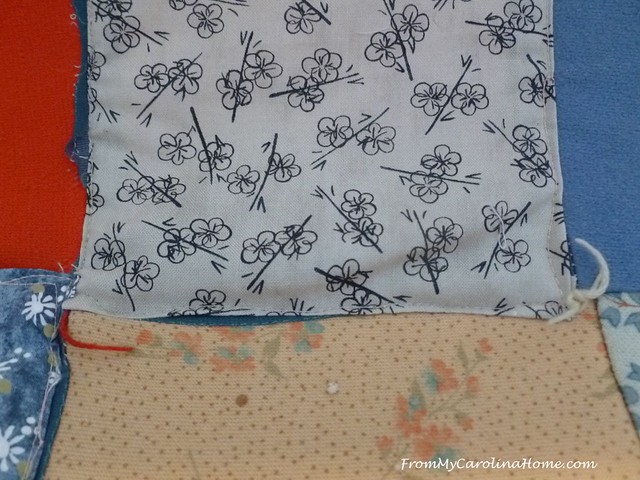 It did teach me a lesson, though.  Quilts like this can only really be repaired by hand, but that would have been way beyond his budget.  Thank goodness I had a customer who didn’t mind that I learned this lesson on his quilt. He was delighted to have it repaired and usable again. 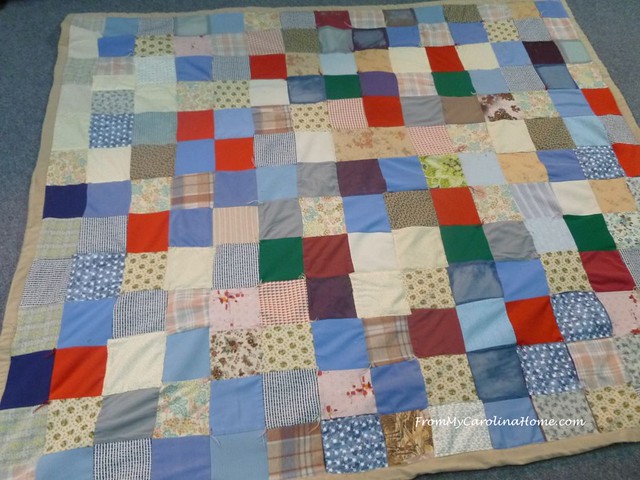 He thought the new patches worked in well, too.  Cannot argue with a happy customer! 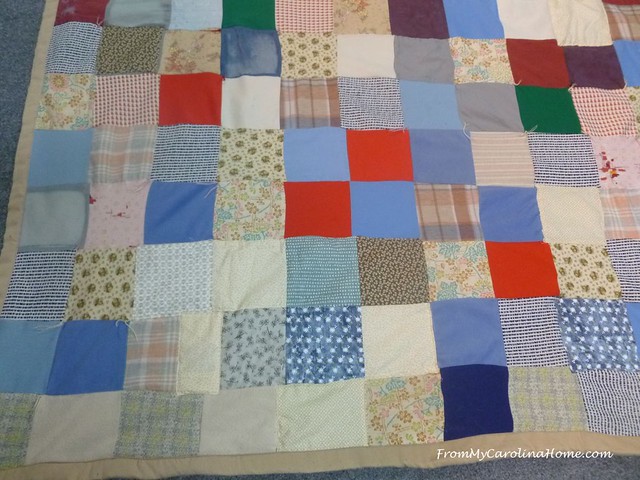 So, now I have another tied quilt to repair, and it has 80 patches that need replacing, all by hand.  It will take a while, but the next customer doesn’t mind paying the cost of that kind of work.  I’ll show it to you when it is done, but that will be a while, LOL!!

What are you sewing this week?