We had our first snow of the season beginning Friday afternoon.  It started earlier than expected, and I was happy to get my appointments done, attend a memorial service, and get DH from the airport before the road froze.  After we were home for half an hour or so, I saw that the turkeys were back again!  I was delighted as I have missed seeing them. I counted at least nine, and maybe more in the woods. They were in the meadow, and weren’t moving around much. Of course, I couldn’t resist seeing if the two males would come when called.  The snow was falling in fat flakes drifting down. 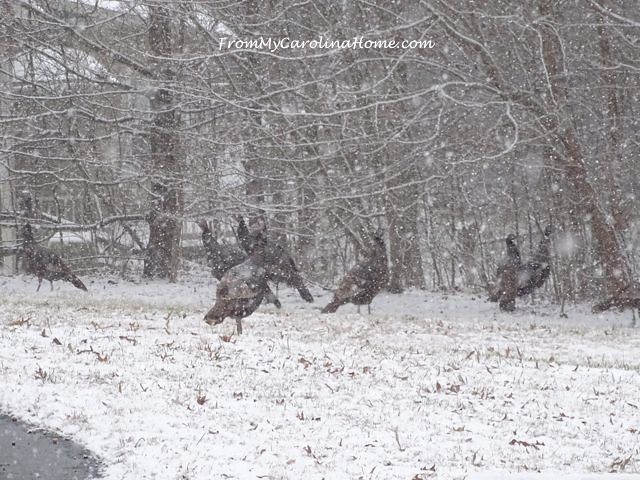 I wish I had brought out the camera fully booted up and ready as I missed getting the two of them running toward me. They made a bee line for me as soon as they saw me and heard me call to them. I had the bread ready, but not the camera. It was funny to see them come straight at me at a dead run! The rest of the birds stayed in the meadow and watched, no one else was willing to take a chance, so these two got all the treats. 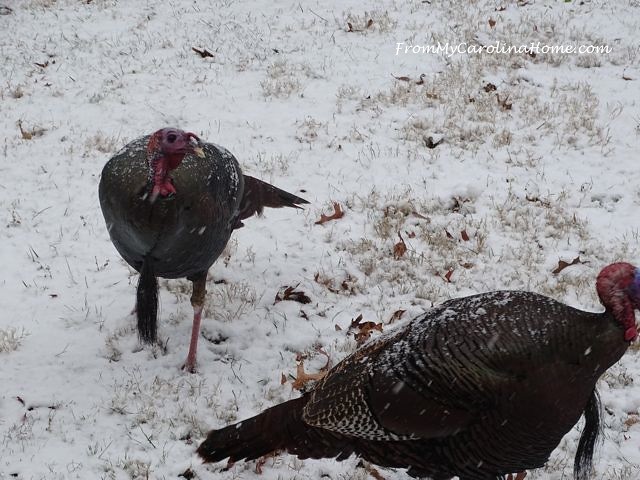 They made their purring and clucking sounds while I fed them several pieces of bread.  I think I should give them names, don’t you?  Maybe Bert and Ernie?  or Butch and Sundance?  Any suggestions? 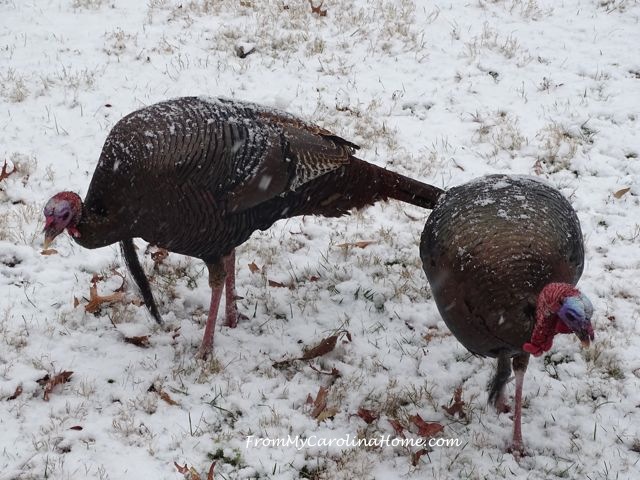 It was blasted cold, around 27 degrees with snow still falling. And they just kept making circles and purring, so of course I had to give them another slice. Next time, I think I’ll put some peanut butter on the bread to give them some extra protein and calories against the cold. 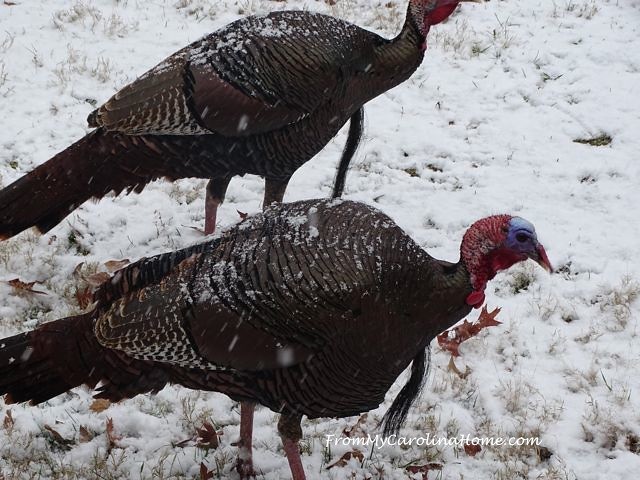 The larger male does get very colorful as his head become more blue and the wattles get red as he struts around. I do think he is preening to get more goodies. It works too. 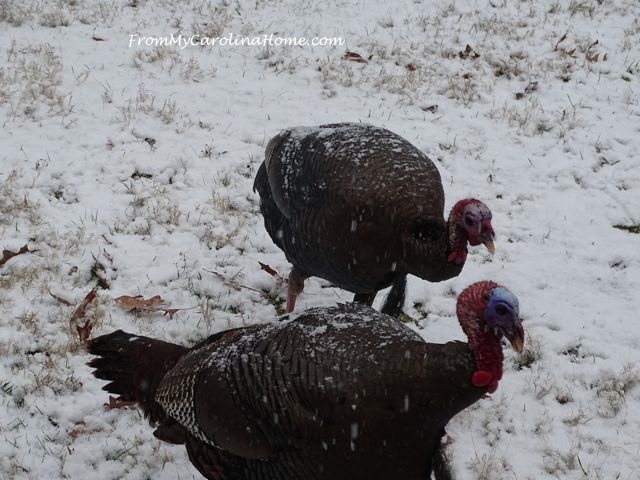 Last night, it was really coming down hard with blustery wind. 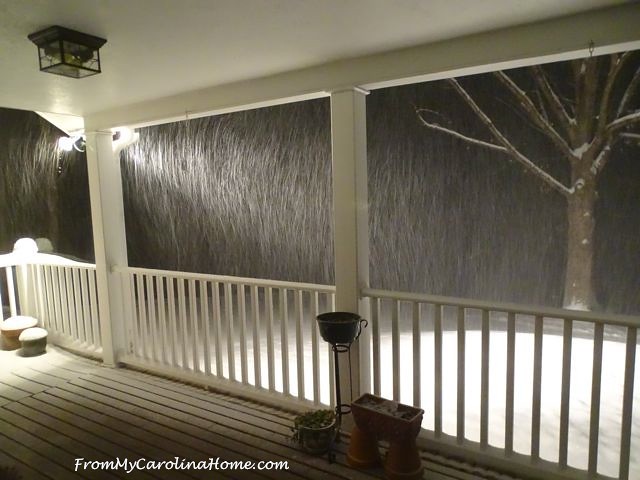 Now that it is white outside, I want to show you some white inside. While putting away the holiday decorations, DH found a wreath in the garage that I forgot I even had!  Well, the ribbon was crushed and certainly the red flowers were needing a lift. 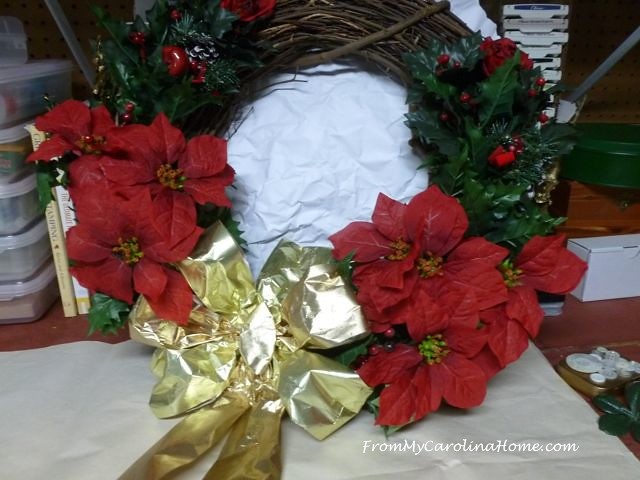 So, I decided to rework it completely for a winter wreath. I am in the mood this month for white, as I usually do in January. White decor and cleaning up the clutter is like a refreshing break from the frenzy of the holidays. I pulled off all the elements, and then cleaned up the excess glue on the wreath. 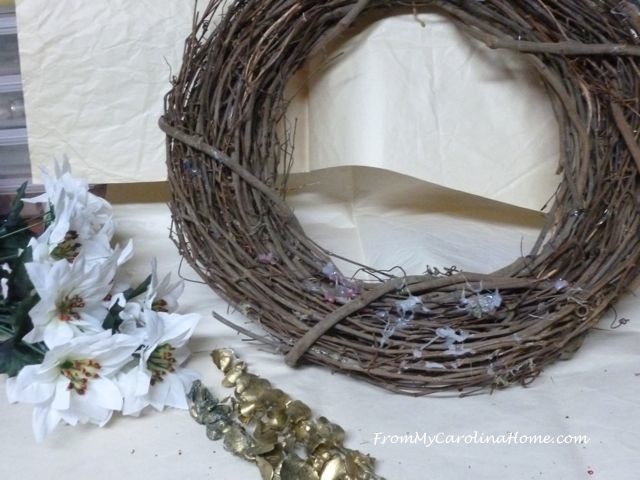 I know I have shown you how to make a bow before. This time I centered it at the top, glueing the streamers under it, using a wonderful silver color wire edge ribbon from the estate sale box. White silk poinsettia flowers were added to each side. In keeping with the clean and simple theme, I stopped there. 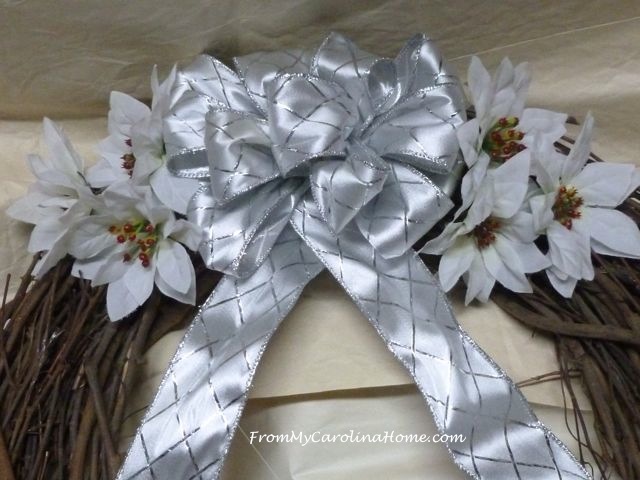 Hanging it up, it will remain through the winter. 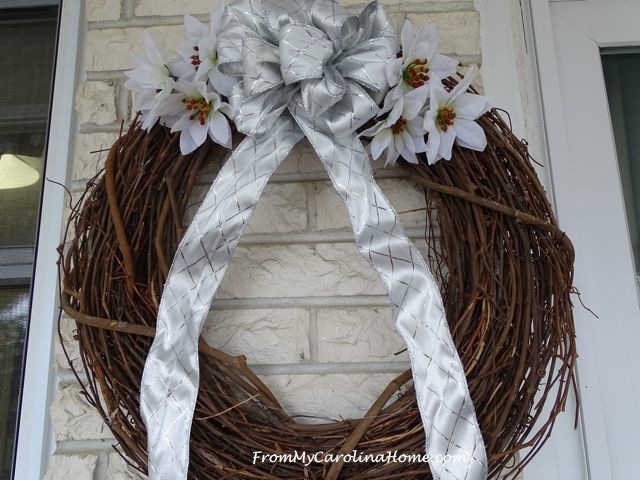 One other thing I did was paint some pine cones.  These aren’t as easy to paint as you’d think.  I began with a white primer paint spraying them from the top. 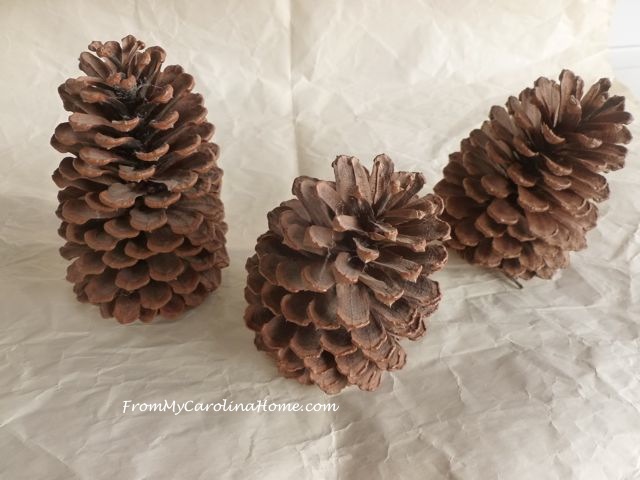 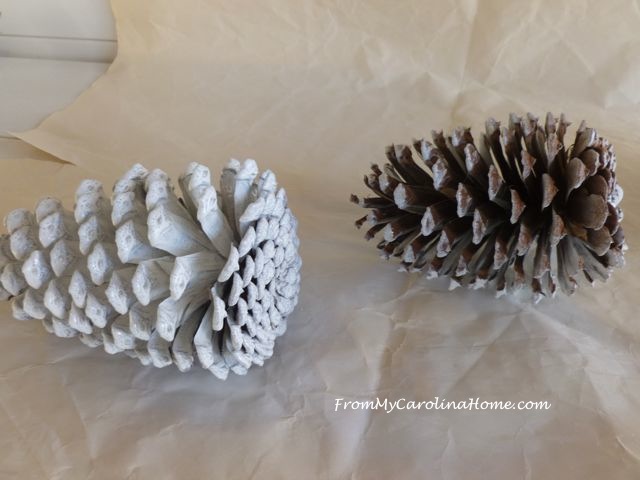 I’ll be using these in a tablescape coming soon. 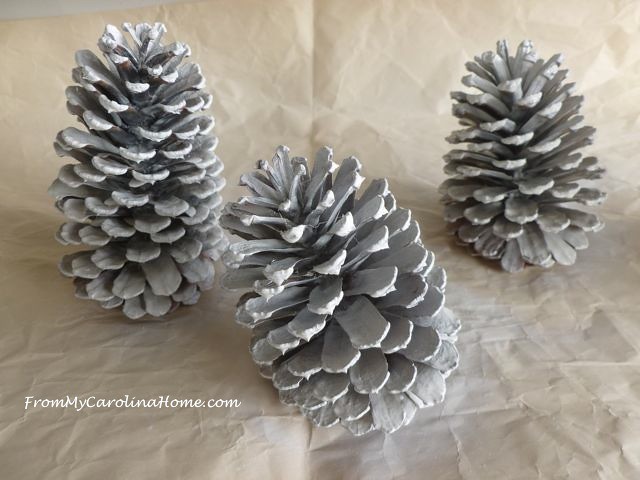 Back outside this morning, it is obvious that we won’t be going anywhere for a while. The forecast was for 3-5 inches, but this looks like more than that. 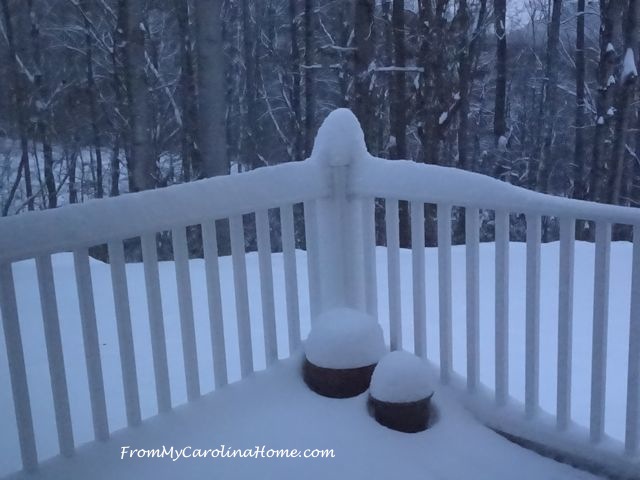 This was near dawn this morning, I love the winter wonderland. Good thing I stocked the pantry last week!  We are expecting a bit more snow this morning too!  There are massive power outages in the area, we are not affected.  We have a whole house generator in case it does go out so I can still sew and do some cooking.  I am going to post this while we have the internet just in case.  It was 20 degrees when I took these pictures. 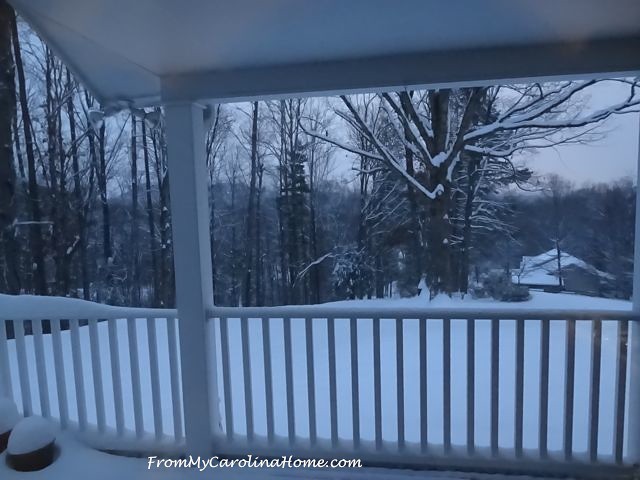 Being snowed in means I can get some sewing done! I have Scrap Dance Waltz loaded and I’ll share that soon as it did present a challenge.  Wild Card Weekend means lots of football on the schedule for the next two days! Maybe I can get some hand work started too.

Do you have any projects going for January?