One thing I need to practice much more is free hand quilting.  I can do feathers most of the time, and some ribbon candy but I am often stymied by  the lack of ideas for quilting without a pattern or pantograph.  Small projects do lend themselves to experimentation, so I decided to custom free hand this runner.  I wanted the background ecru to be different from the white snowflake blocks.  As this runner is very low volume, almost no contrast to differentiate the white from the ecru, I hoped the quilting would help. First, to decide whether to use ecru or white batting. 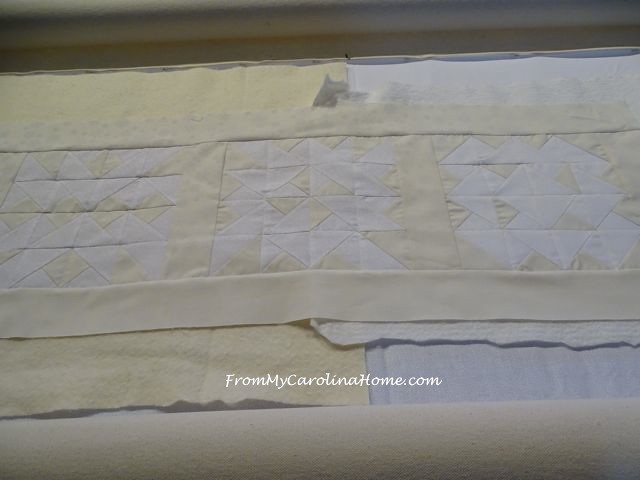 The white brightened the white areas a bit more, so I loaded it on the longarm and stitched down the edges. 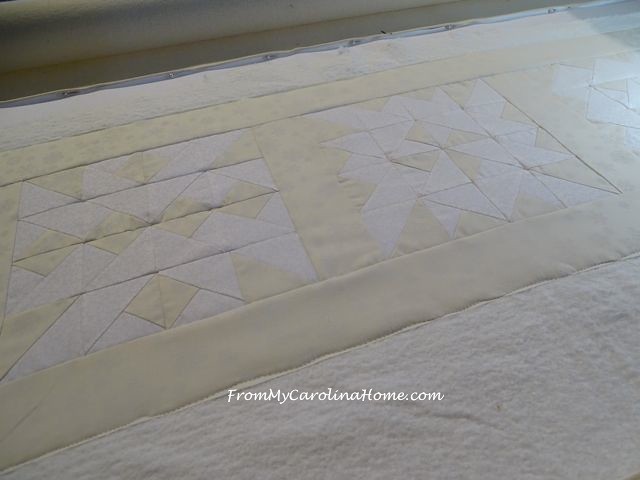 I put feathers around the border, working them into the areas in ecru around the snowflake blocks.  Oops, missed one. 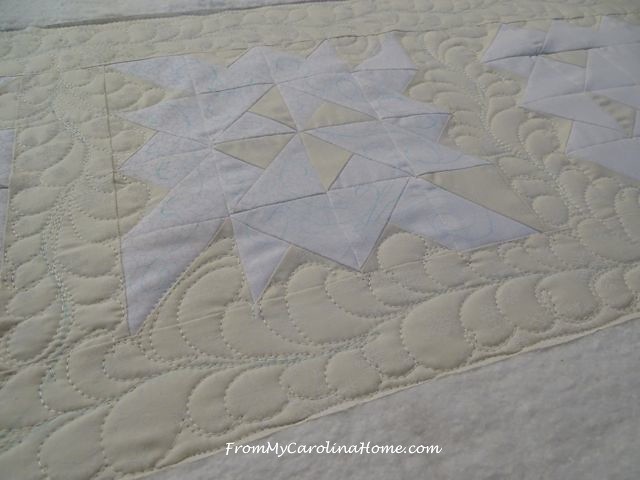 Here’s the other end. 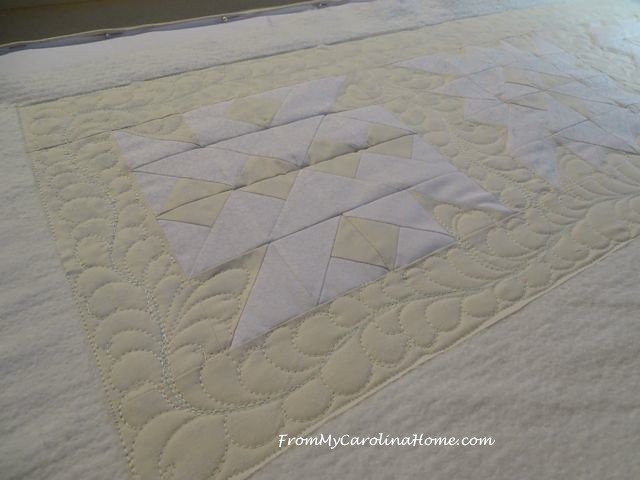 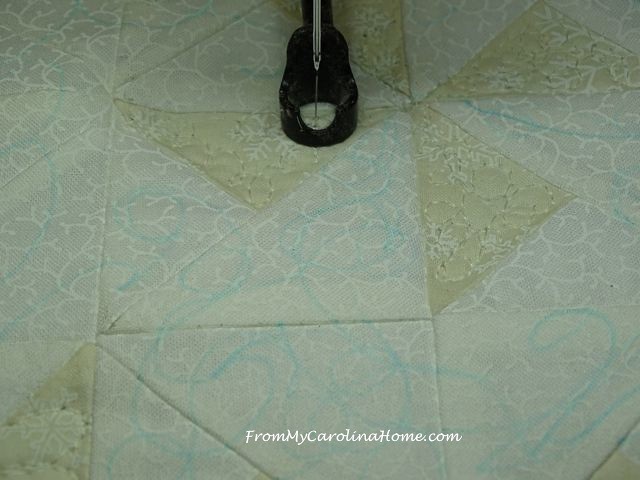 Then I didn’t like what I drew, and drew more lines over those. I wanted to practice some pebbling in the ecru triangles, so I did that first. 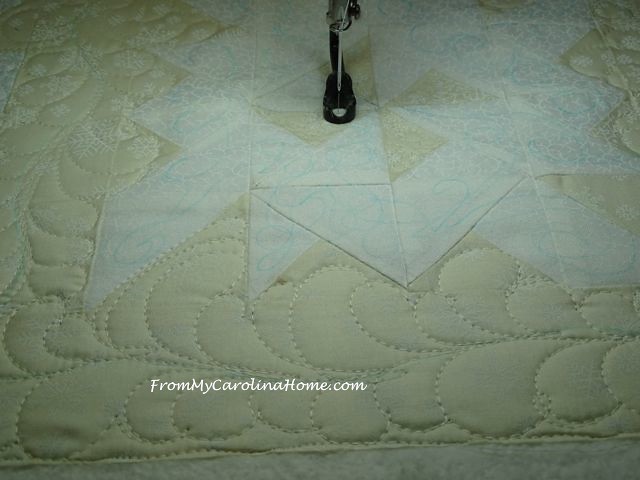 In the end, I ignored the markings and did some loops.  Bad choice, it does nothing for the snowflake idea, but I am not frogging it. 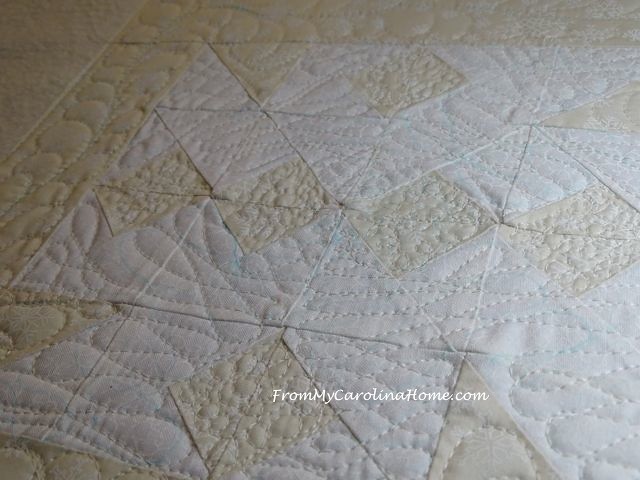 Kinda, meh on the quilting. Feathers are OK, but the rest is really mundane. 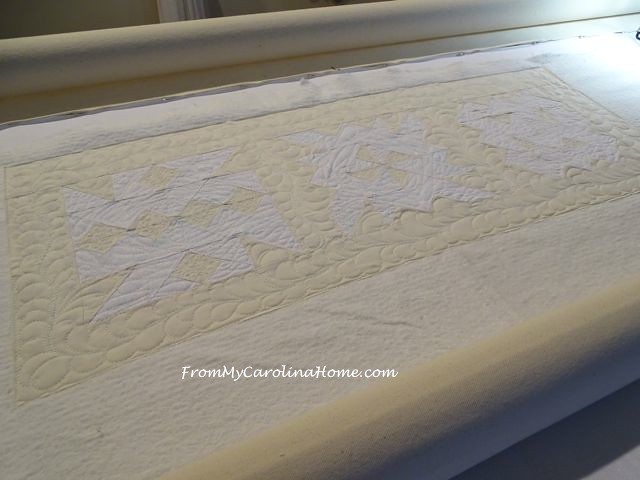 They don’t look much like snowflakes, but I do like the white on ecru.  I probably should look into a few stencils. 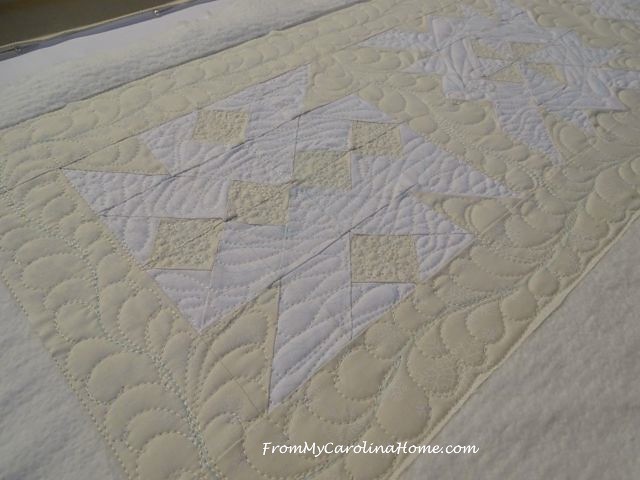 The binding was a bit longer than two strips, so I put a short strip between the longer ones. I laid it out to be sure that the seams didn’t end up on a corner. 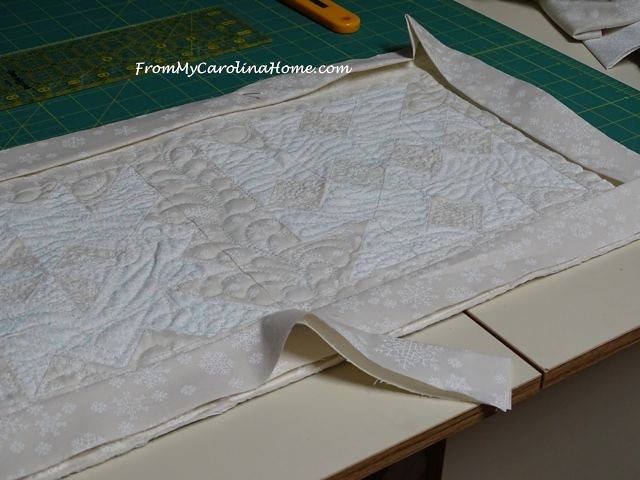 Stitching it down in the usual way. 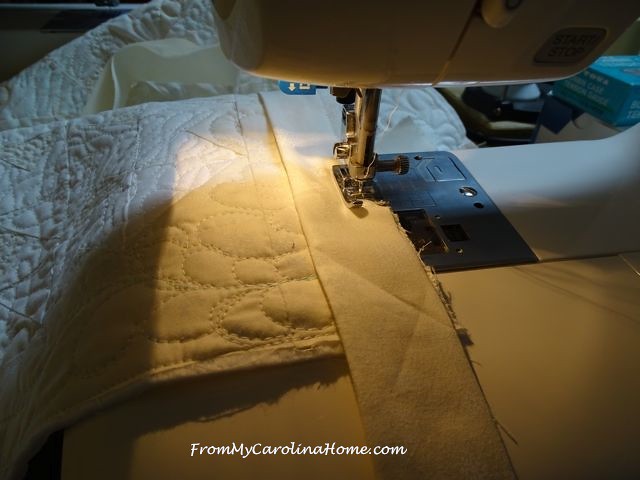 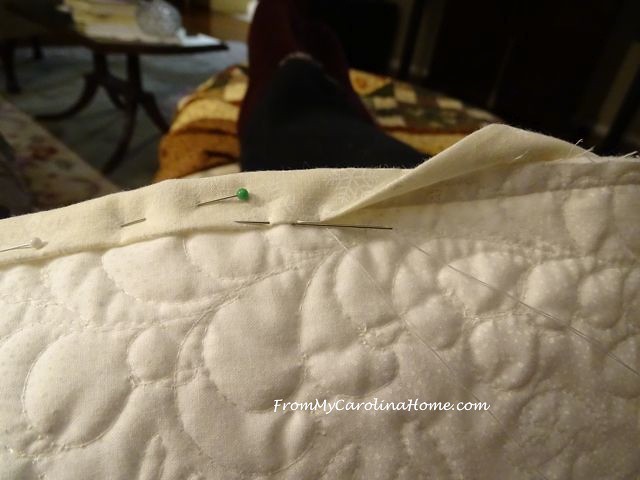 Finished, and displayed on the kitchen counter. 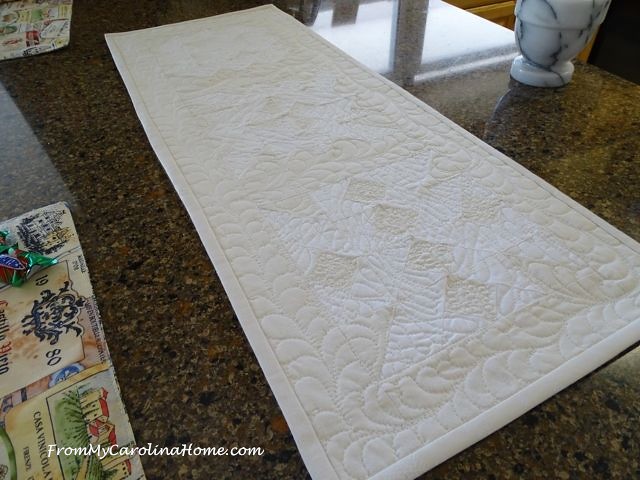 Here are a couple of close up shots, after it was ironed and the blue marks removed. Whew, yes they all came out. 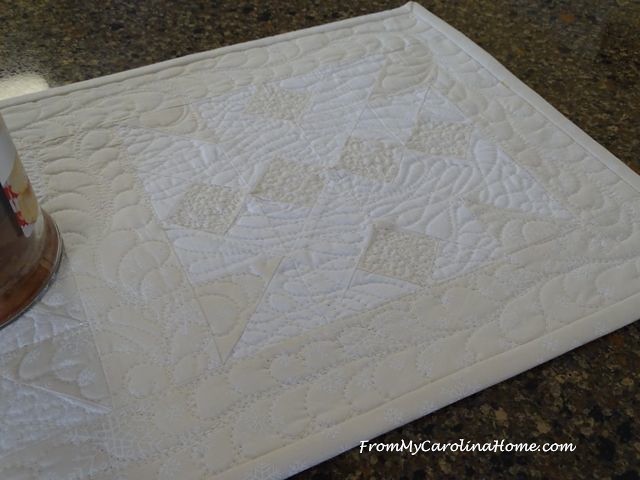 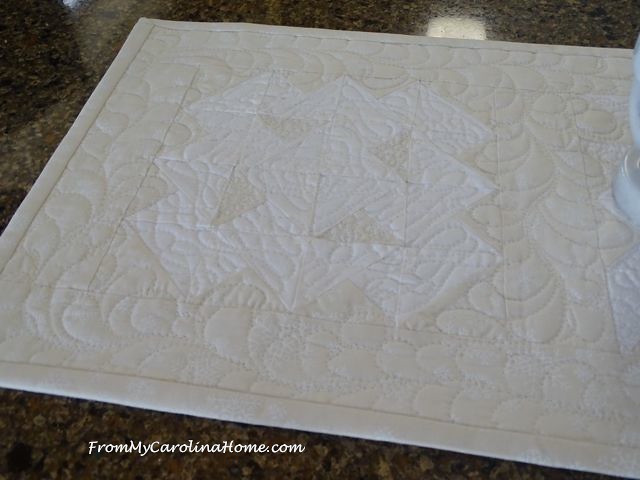 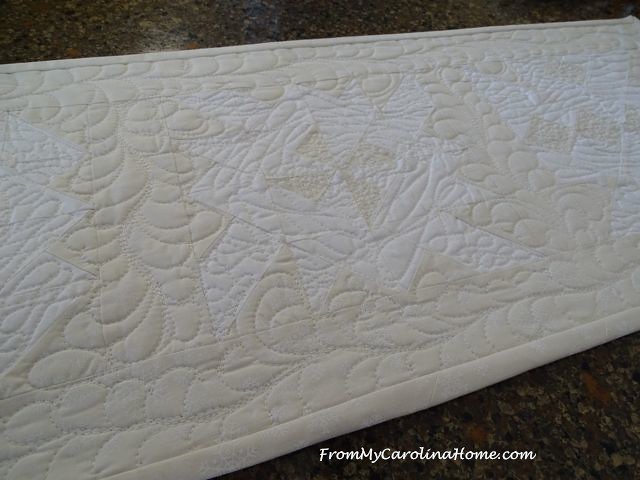 I liked the mortar and pestle on it, with my grandmother’s little white chickens. 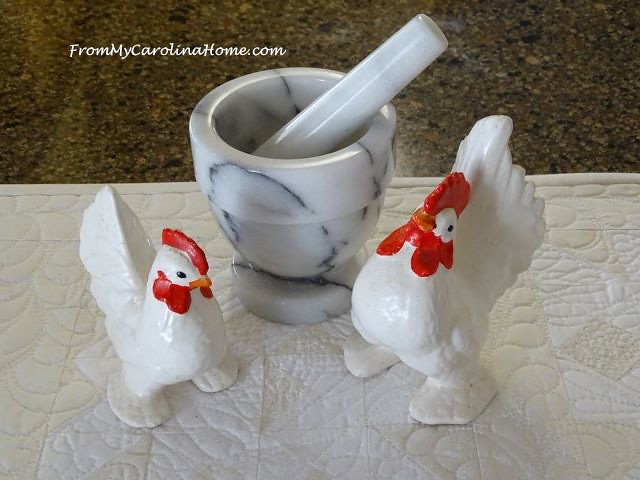 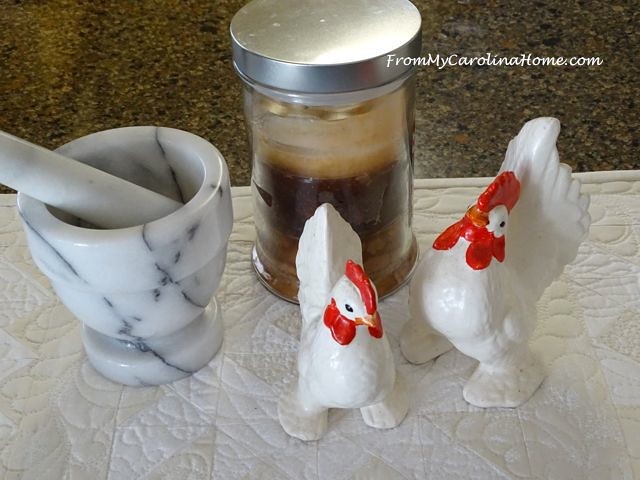 I think I am done with white for now. I’ll enjoy the clean feel of white through January, then it will be on to Mardi Gras.

28 thoughts on “Quilting the Snowflake Runner” 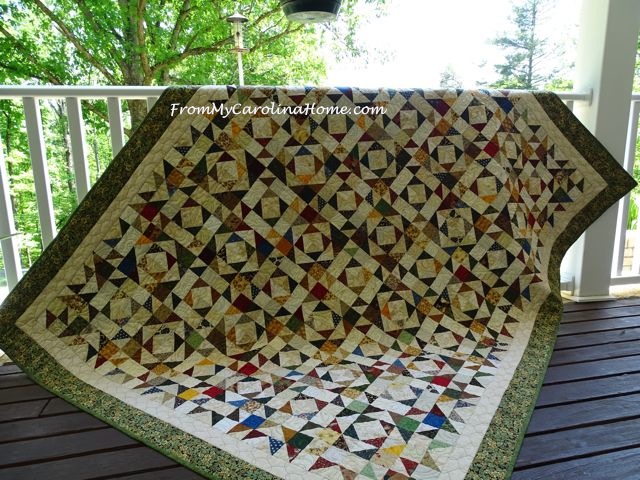